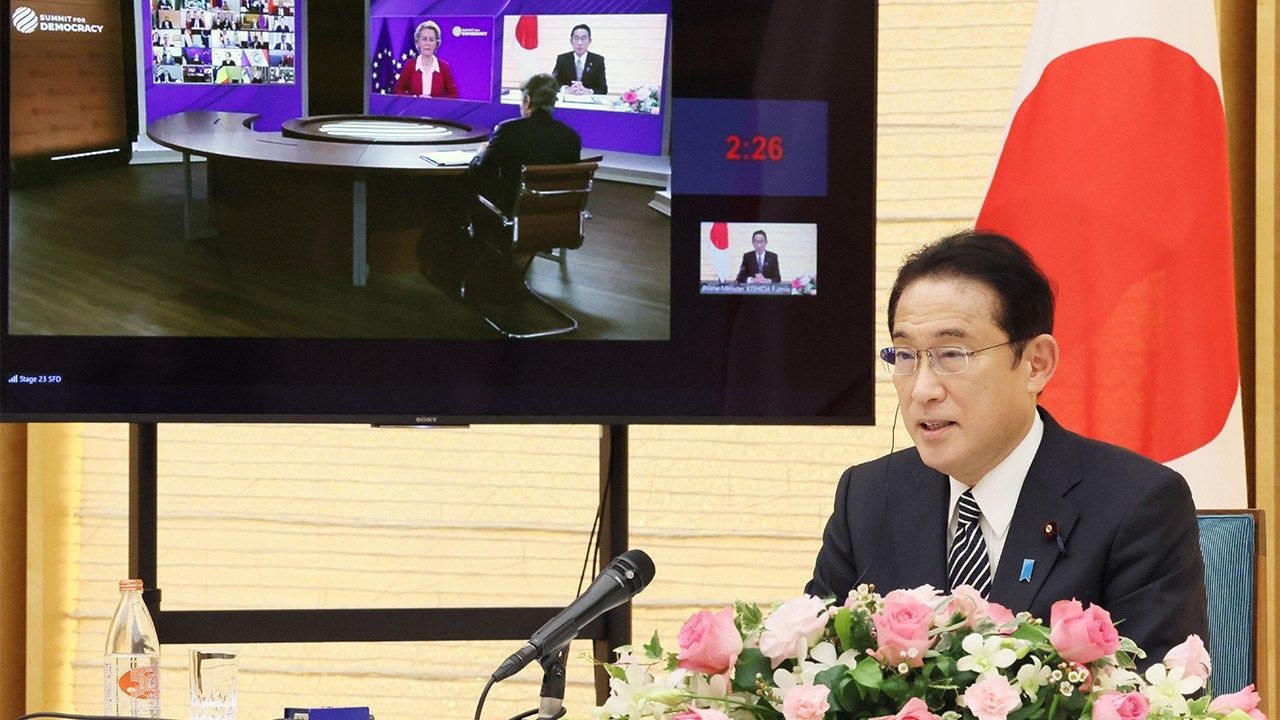 Politics Feb 4, 2022
Prime Minister Kishida Fumio has promised a more active commitment to global human rights as a pillar of his government’s foreign policy. What are the forces driving this shift, and what must Japan do to be a credible and effective advocate for human rights?

Prime Minister Kishida Fumio won his bid for leadership of the ruling Liberal Democratic Party last fall in part by appealing to the LDP’s rightwing conservatives with a pledge to pursue a more outspoken and robust brand of human rights diplomacy—the assumption of the conservatives being that China will be the main target of such a policy. How is this commitment likely to play out given Kishida’s own diplomatic leanings? What are the government’s best options for positioning Japan as a credible and effective advocate for human rights worldwide?

From Words to Action on Values-Based Diplomacy

Liberal democratic values have come under escalating attack over the past 15 years, as governments around the world move to curtail freedom of speech, freedom of the press, religious freedom, and other basic human rights. This rejection of liberal values has swept the globe, spreading from country to country and region to region. Japan is no exception.

Interestingly, the same period has witnessed the rise of values-based diplomacy as a tenet of Japanese foreign policy. The trend began with the first cabinet of Prime Minister Abe Shinzō (2006–7), with its notion of the Arc of Freedom and Prosperity. It was fleshed out by the second Abe cabinet as the Free and Open Indo-Pacific vision, which remains a pillar of Japanese foreign policy. The emphasis on values represented a historic shift in orientation for postwar Japanese diplomacy. In concrete terms, it led to stronger partnerships with countries that share a commitment to democracy, human rights, and the rule of law. It has also helped strengthen the norms and narratives of liberal values worldwide.

On the other hand, these new initiatives did not significantly alter the way Tokyo helps defend human rights and democracy in other countries. This is what Kishida has promised to change. In the fall of 2021, after he announced his candidacy for LDP president, Kishida called for a more forceful brand of human rights diplomacy and expressed support for national legislation to facilitate government action against violators overseas. After taking over as prime minister, he stressed an active commitment to such universal values as freedom and democracy as the mainstay of his “new-era realism diplomacy.”

Kishida has taken a number of steps to create policy frameworks for the new human rights diplomacy. He began by appointing Japan’s first human rights czar, tapping former Minister of Defense Nakatani Gen to serve as his special advisor. Nakatani has co-chaired the Nonpartisan Parliamentary Association for Reconsidering Human Rights Diplomacy that has worked to draft a Japanese version of the so-called Magnitsky Act, legislation designed to facilitate sanctions on human rights abusers abroad.

Since the end of the year, Nakatani has rushed to install new schemes. He has established an inter-ministerial committee charged with drafting guidelines for corporate “due diligence” to prevent human rights abuses in the supply chain. The hurdle for working on this issue was relatively low, as the Japanese government had already been holding a number of advisory group meetings toward the establishment of such guidelines since 2018 as part of its efforts to promote the Sustainable Development Goals.

Nakatani has also set up a cross-agency project team to discuss human rights issues in Japan and overseas. Responding to the Export Controls and Human Rights Initiative unveiled by Australia, Denmark, Norway and the United States at the Summit for Democracy, the Kishida cabinet revealed that it was considering measures to restrict exports of surveillance technology that could be used to violate human rights. On December 24, it indicated that government officials would absent themselves from the February 2022 Beijing Olympics in protest against human rights abuses. In addition, the Ministry of Foreign Affairs announced plans to establish a new senior post to coordinate the ministry’s monitoring and handling of global human rights abuses. Further developments are likely in the months ahead.

To get a better handle on the thrust of Kishida’s human rights diplomacy, we need to understand the forces driving his policy shift.

One important factor was Washington’s new policy orientation under US President Joe Biden, who has moved to shore up democratic norms and institutions that were weakened by the administration of Donald Trump. Biden has placed support for democracy and human rights high on the international agenda. He used the December 2021 Summit for Democracy to extract commitments from the participants. The administration has also promoted a joint international response to human rights violations, as seen in the coordinated sanctions Western countries imposed on Chinese officials over rights abuses against the Uighur minority.

A second factor behind the shift was probably Kishida’s realization that he needed to distance himself from the previous two LDP cabinets in certain respects in order to boost his own cabinet’s public support and restore confidence in the ruling party. Both Abe and his successor Suga Yoshihide struggled with public approval ratings. The COVID-19 response was a major reason for this disaffection, but another was the perception that the newly augmented powers of the prime minister’s office were being used to evade transparency and accountability while curtailing civil liberties (a perception fueled by the Moritomo Gakuen, Kake Gakuen, and Science Council affairs, among other controversies). For Kishida, a vigorous commitment to liberal democratic norms is key to differentiating his LDP cabinet from those of his predecessors.

At the same time, Kishida’s options for acting on that commitment are limited by powerful conservative forces within the LDP, and this leads to the third major reason behind his decision to make human rights diplomacy a pillar of his foreign policy.

Kishida represents the liberal wing of a party increasingly dominated by right-wing conservatives. Within the latter bloc, there is mounting support for human rights diplomacy in the specific context of a “get tough on China policy.” At the same time, the conservatives are very mistrustful of moves to expand civil liberties and human rights protections within Japan. To secure the support of this powerful bloc, Kishida has little choice but to limit the scope of his human rights crusade to foreign policy.

A dovish consensus builder by nature, Kishida has no particular desire to antagonize Beijing in the name of human rights. He is much more comfortable with the idea of Japan as a bridge between the United States and China. This helps explain why, since taking office, he has put the brakes on efforts to enact a Japanese Magnitsky Act, which he had previously endorsed—and also why his cabinet took so long to join with the United States and several European countries in announcing a de facto diplomatic boycott of the February 2022 Beijing Olympics.

As noted above, much of the momentum behind Kishida’s human rights diplomacy comes from LDP forces eager to “get tough on China.” However, if the aim is to defend human rights worldwide, this selective approach is likely to be counterproductive. Ultimately, such targeting is bound to fuel criticism that Tokyo is using human rights as a strategic tool, a thin pretext for dividing the world into two camps. Such criticism can only undermine confidence in Tokyo’s foreign policy and its commitment to liberal values.

To avoid this perception, we need to adopt a set of objective human rights standards, equally applicable to all countries, which we can use to explain our diplomatic decisions in terms of universal values. Enactment of a Japanese Magnitsky Act would help serve this purpose by establishing an autonomous system for sanctions in the event of serious human rights violations.

Another way for the government to defend human rights even-handedly, without sacrificing international credibility, is to provide financial support for the human rights activities of respected international organizations and local non-state actors. Herein lies the significance of the government’s pledge at the Summit for Democracy to provide some $14 million to the United Nations Development Program to help eliminate human rights abuses. Still, an organization like the UNDP has serious limitations. It can offer support to governments that welcome outside assistance in improving their governance capacities, but it cannot help citizens subject to government repression and abuse.

The fact is that Japan has no framework for offering human rights assistance to non-state actors overseas. Japan has yet to play a role in defending civilians in response to raids and repressions by Myanmar’s armed forces since the February 2021 military coup. It provides no aid to independent news media dedicated to exposing and fighting human rights abuses, which are essential to the free flow of information and government transparency. Instead, Japan’s entire international aid apparatus is built around government-to-government assistance.

The best way to overcome the issue of state sovereignty would be to create an independent and autonomous body, supported by government funding, and to have it work for the purpose of assisting nongovernmental organizations and other non-state actors overseas. Another option would be to mobilize other countries and create a multilateral framework for the entire region. Japan could help reverse the deterioration of human rights in Asia, which progresses at a frightening pace, by spearheading the creation of a regional framework for the support of civil society groups. Such an initiative would do much to enhance Japan’s standing as a global actor in the promotion and defense of liberal democratic norms.

Finally, for Japan to play a more meaningful and influential role in the effort to uphold liberal democratic norms, it must address flaws in its own systems and practices using the same standards it applies to other countries. Japan’s democratic institutions have taken a serious hit over the past decade. Kishida needs to take steps to address these weaknesses if he hopes to become Japan’s first human rights prime minister.