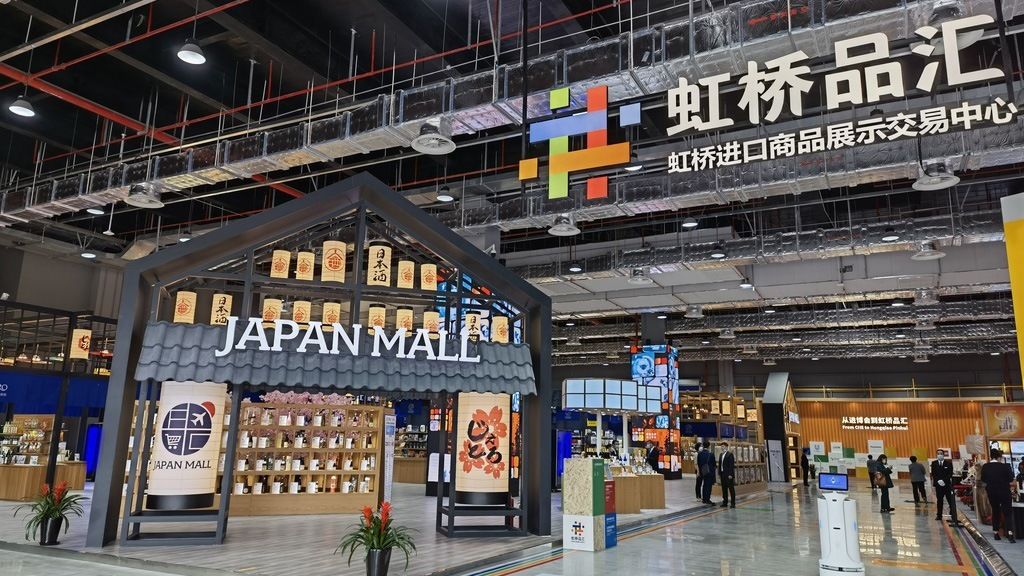 The Regional Comprehensive Economic Partnership: Its Significance for the East Asian Economic Order

Economy Politics Feb 22, 2022
The Regional Comprehensive Economic Partnership, a free trade agreement among 15 nations including Japan, China, South Korea, and ASEAN’s members, took effect in January 2022. Despite the headwinds greeting its launch, RCEP can be expected to influence the economic order in East Asia.

The Regional Comprehensive Economic Partnership took effect on January 1, 2022, exactly 10 years since 16 nations—the members of the Association of Southeast Asian Nations, Japan, China, South Korea, Australia, New Zealand, and India—announced the start of negotiations in November 2012. While this process was initially meant to be completed by the end of 2015, it saw rough going, with India withdrawing from the talks in November 2019. In the end, 15 nations excluding India signed the free trade agreement in November 2020, in the midst of the COVID-19 pandemic. This was followed by Japan, China, Brunei, Cambodia, Laos, Singapore, Thailand, and Vietnam ratifying RCEP, thereby completing the requirements for the agreement taking effect. Since then Australia and New Zealand have also ratified the agreement. 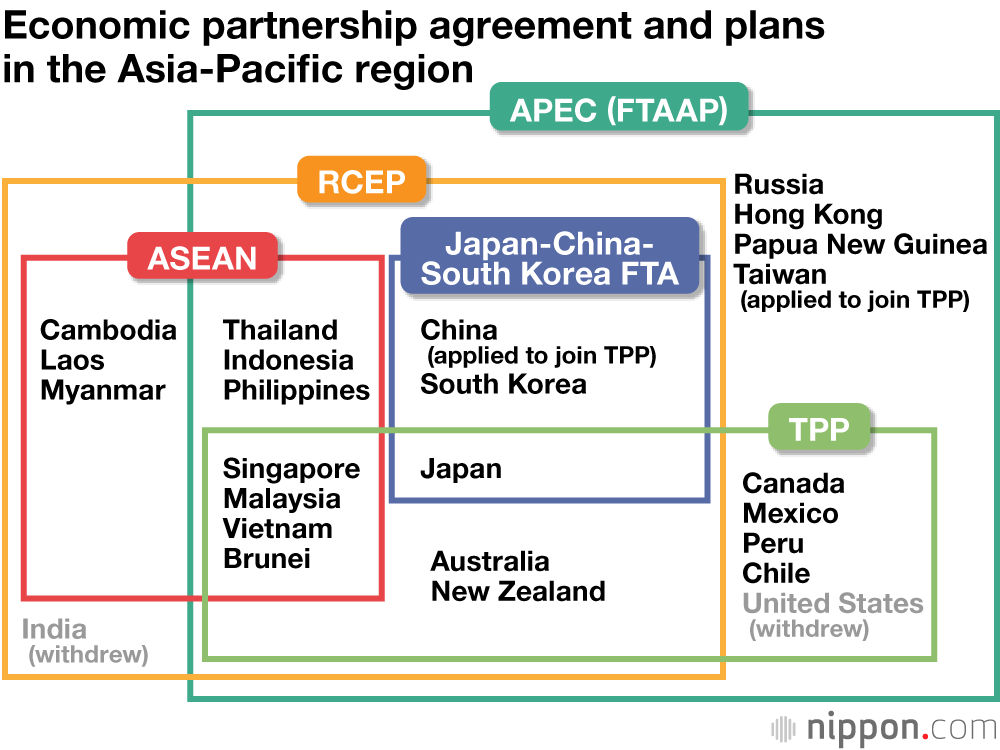 Stronger Connections with the Rest of Asia

What should be noted at first about RCEP is its tremendous scale.

Despite India’s withdrawal, RCEP easily surpasses the Comprehensive and Progressive Agreement for Trans-Pacific Partnership (CPTPP) and the Japan-EU Economic Partnership Agreement. RCEP member nations have a combined population of 2.27 billion, about 30% of the world’s population. Their combined GDP is $25.8 trillion, nearly one-third of global GDP. In an estimate published in March 2021, the Japanese government anticipates that RCEP will boost Japan’s GDP by about 2.7%.

The RCEP framework aims to integrate national economies, centering on ASEAN. Through the 2000s, ASEAN has concluded bilateral trade agreements with its leading non-ASEAN trading partners. Parallel to its free trade agreement with ASEAN, Japan has also concluded bilateral agreements with individual ASEAN nations. Building on these developments, RCEP can be viewed as a framework for achieving regional economic integration across East Asia. RCEP negotiations emphasized the centrality of ASEAN, such as by having ASEAN always serve as the chair.

RCEP is also significant for being the first free trade agreement concluded among Japan, South Korea, and China. In an estimation published by Peter A. Petri and Michael G. Plummer in June 2020, these are the three members that will benefit the most from RCEP.

RCEP is expected to promote trade and investment throughout East Asia. Governments and industrial sectors place great expectations on free trade agreements, which they view as a means for improving market access, such as by eliminating tariffs. While RCEP has achieved significant results in this area, it will do far more. In its 20 chapters, RCEP prescribes common rules for such matters as rules of origin, trade facilitation, investment, intellectual property, and electronic commerce. The establishment of such common rules is extremely important since East Asia consists of nations of varied geographic sizes and economic development. Common rules will promote and strengthen a rules-based, free, and open economic order and will contribute to the deepening and expansion of supply chains that have enabled East Asia to prosper.

Through the information and communication technology (ICT) revolution that has progressed since the 1990s, the expansion and deepening of cross-border supply chains have powered the development of East Asian nations. In the estimation of Petri and Plummer referred to above, Japanese, Chinese, and South Korean trade has grown, particularly for advanced manufacturing sectors, and supply chains have experienced further deepening. The development of many ASEAN nations is dependent on incorporating their economies in cross-border supply chains. To do so, it will be necessary to attract the investments of the multinational corporations of advanced economies. It will also be necessary to reduce systemic barriers to domestic companies’ participation in the cross-border division of production. RCEP addresses these objectives by improving mutual market access for a range of goods and by incorporating rules of origin and other standards for trade.

With respect to electronic commerce, RCEP provides for the free cross-border transfer of information by electronic means for the conduct of business (free flow of data) and prohibits parties from requiring that computing facilities be located in their own territory (prohibition of data localization demands). RCEP does not prohibit parties from requiring the disclosure and transfer of source code, as does TPP. While RCEP does include escape clauses on legitimate public policy and on essential security interests, the incorporation of rules on electronic commerce in this major free trade agreement that includes China is highly significant.

As noted above, it was sometimes argued in negotiations that RCEP represented a move toward the establishment of an economic bloc led by China. RCEP was contrasted with TPP, which was seen as being led by the United States, and it was sometimes perceived as exemplifying US-China rivalry. Once the United States withdrew from TPP, some observers took the position that RCEP was a tool for expanding China’s economic presence in East Asia. Setting aside the issue of whether RCEP negotiations were led by China, RCEP can be expected to promote regional trade and investment and the expansion and deepening of East Asia’s supply chains. Such developments will also likely result in China’s economy assuming a greater presence. In purely economic terms, this appears to be an acceptable outcome.

It cannot be said, however, that RCEP has been met exclusively by tailwinds. The greatest issue for the trade agreement is the increase of political intervention in economic activities. As US-China rivalry intensifies, both sides are strengthening the regulation of trade and investment from the perspective of economic security, and they are endeavoring to control supply chains related to advanced technology and essential commodities. Moreover, the United States is seeking to regulate corporate activities in China on account of the infringement of human rights in Hong Kong and the Xinjiang Uyghur Autonomous Region. These developments are stimulating the discussion of economic security in Japan. There are unquestionably risks in depending too much on China’s economy, and some sort of response will be required. Policies based on economic security, however, mean strengthening government control of markets, which is contrary to the direction taken by RCEP.

The Emergence of Globalization’s Contradictions

A more basic issue is the questioning that has begun of the premise that a rules-based, free, and open economic order is a desirable objective. The wide-area economic blocs that were proposed in the 2000s and the TPP and RCEP negotiations that proceeded in the 2010s were based on a model of development achieved by promoting globalization through a free and open economic order. However, after having advocated this model and having led TPP negotiations, the United States withdrew from such negotiations in January 2017 during the Donald Trump administration and turned toward protectionism. As a result, expectations were suddenly directed toward RCEP as a framework for maintaining and strengthening a free and open economic order. As a matter of fact, the establishment of rules progressed rapidly in RCEP negotiations after the US withdrawal from TPP, as more came to be expected of the trade agreement.

Currently, the freedom and openness of the economic order are under increasing threat. In addition to intensifying US-China rivalry, the COVID-19 pandemic has dealt a major blow to the cross-border movement of people, and trends counter to globalization have accelerated further. In responding to the pandemic, an attitude of putting one’s nation first and exclusionary nationalism appear to be strengthening in national policies and in the minds of people.

Moreover, our progress toward a freer and more open economic order has brought to light the contradictions of globalization. The widening of domestic income disparities accompanying the advance of globalization has given rise to an intolerant nationalism and to protectionism in the United States and other nations. Globalization’s negative impact on the environment and on the human rights of workers is also a matter of great concern.

A Framework for Maintaining Economic Order

Given these circumstances, RCEP may appear to be going against the times for positioning this free and open economic order as a desirable objective. It seems safe to say, however, that RCEP’s role in the midst of these headwinds as a framework for upholding a rules-based economic order in East Asia is increasing in importance.

While it may be necessary to correct lopsided supply chains and to avoid serious risk in terms of national security, we will need to revisit how the world was split by the economic blocs that were established in the 1930s. Of course, we will need to respond to the negative consequences of rising economic orders and the globalization they involve. Now that RCEP has taken effect, the RCEP Joint Committee will be discussing appropriate revisions of agreement details. It will be desirable to improve the quality of RCEP as a trade agreement by including rules on the environment, labor, and other fields to correct and mitigate the negative effects of a free economic order.