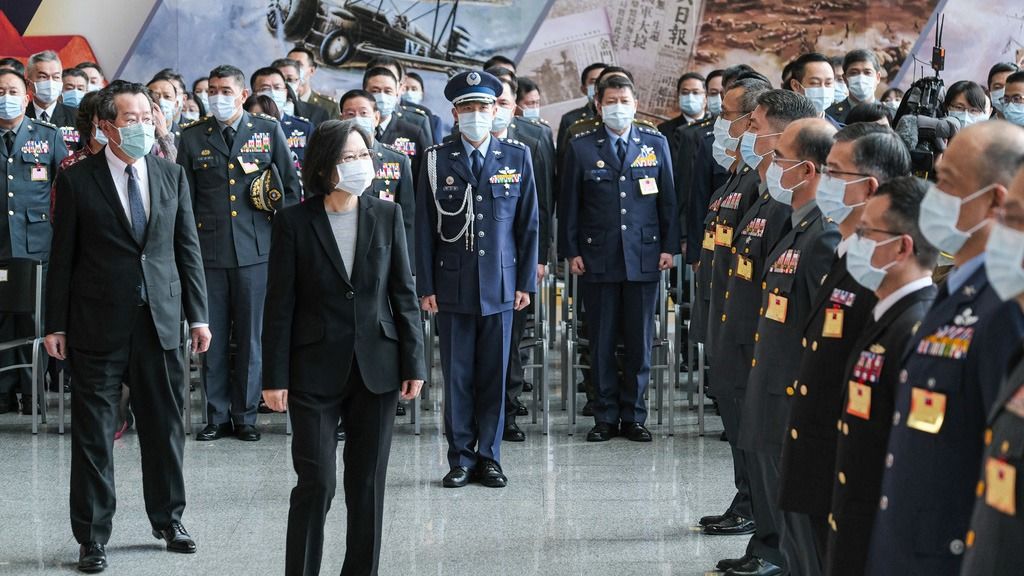 Politics Mar 24, 2022
Beijing has mounted a relentless campaign of intimidation, harassment, and disinformation against Taiwan with the aim of slowly wearing down the nation’s resistance to reunification. Momma Rira dissects China’s “gray zone” warfare and Taiwan’s response.

In recent years, China has been waging a concerted campaign of “gray zone” aggression against Taiwan. By 2021 the situation had escalated to the point where Taiwan’s Ministry of National Defense began detailing the threat in its official defense reports.

Gray zone conflict, as the term suggests, is a state that falls into the gray area between peace and war. The 2021 white paper Defense of Japan defines a “gray zone situation” as one in which one or more parties to an international dispute attempt to alter the status quo and advance their strategic goals by means of threatening actions or provocations that fall below the threshold of armed aggression. Taiwan’s Ministry of National Defense adopts a broader interpretation, citing not only military and paramilitary activity, but also economic coercion, cultural harassment, and disinformation. Taipei believes that China is steadily intensifying its harassment on all of these fronts with the aim of exhausting Taiwan’s defenses, shaking the people’s faith, and slowly whittling away at Taiwanese resistance to reunification.

In the economic sphere, China and Taiwan continue to trade actively under the bilateral Economic Cooperation Framework Agreement concluded in 2010. But lately China has taken to abruptly suspending specific agricultural imports from Taiwan on various pretexts—first pineapples in March 2021, then sugar apples and wax apples the following September, then farm-raised grouper in January 2022.

In the cultural sphere, Beijing has been targeting Taiwanese stars and celebrities in its effort to sway public sentiment. On the one hand, Taiwanese pop stars have been induced to appear in mainland-produced TV music shows featuring songs with a pro-unification message. On the other hand, Taiwanese celebrities who speak out against Beijing have repeatedly found themselves publicly shamed and denounced by “patriotic Chinese citizens” on social media.

Political harassment has intensified as well. In November 2021, China’s Taiwan Affairs Office named Taiwanese Premier Su Tseng-chang and two other top officials “stubbornly pro-independence elements” and announced that they would be held criminally liable for life. On the diplomatic front, China has used the lure of economic aid and even COVID-19 vaccine doses to pressure smaller countries into severing diplomatic ties with Taiwan, while punishing states that are friendly to Taiwan.

As part of its political warfare, China has enlisted the support of Taiwanese veterans born in China before 1949, many of whom retain deep sentimental ties to the mainland. As early as 2016, a group of retired Taiwanese generals caused a furor at home when they attended an event held by General Secretary of CPC Xi Jinping in Beijing to commemorate the 150th birthday of Sun Yat-sen and were photographed standing at attention while singing the Chinese national anthem. In 2021, retired marine corps general Chi Lin-liang, who chairs a caucus of mainland-born veterans within the conservative Kuomintang (Nationalist Party), provoked outrage when he publicly dismissed the seriousness of near-daily incursions by PLA aircraft into Taiwan’s air defense identification zone, or ADIZ. It is true that the warplanes have not violated international law, since they remain outside Taiwan’s airspace, but they are clearly part of Beijing’s gray zone strategy of wearing down Taiwan’s defenses and desensitizing the Taiwanese to China’s military presence. Chi and other retired military officers have become pawns in this strategy.

Beijing is engaged in an all-out campaign of psychological warfare against Taiwan, and disinformation is a key component. One favored tool is “fake news,” as exemplified by reports on Chinese news websites claiming that Taiwan was conducting live-fire drills in the Taiwan Strait when in fact the exercises were being carried out elsewhere. In addition, Taiwan’s National Security Bureau has revealed that since 2018, Beijing’s operatives have been at work doctoring photos and videos of Taiwanese leaders. Recently their technical skill has advanced to the point where it is quite difficult to distinguish a fake from the real thing. Materials of this sort, if disseminated broadly, can be extremely damaging to those targeted.

In December 2021, China Central Television broadcast a report on a PLA military exercise in which a force consisting of hundreds of troops and dozens of tanks entered and occupied a city in less than three hours, clearing land mines and other obstacles. Meanwhile, the China Coast Guard Law, which came into effect in February 2021, has opened up new possibilities for maritime gray zone operations by strengthening military cooperation between the People’s Liberation Army and the China Coast Guard.

Taiwan, for its part, has been taking active measures to counter these and other forms of gray zone aggression by China. In 2017, seeking to boost the nation’s cyber defense, Taiwan’s Ministry of National Defense formed the Information, Communications, and Electronic Force Command, which continues to expand. The National Security Bureau recently launched a special unit to guard against the use of fake or doctored images to influence elections or sway public opinion. In May 2019, the Defense Ministry also formed a rapid response team to counter disinformation on the Internet. The Taiwanese Armed Forces have been working to preempt fake news by the Chinese media by proactively disseminating its own official information on military exercises. On January 6, 2022, the army released video footage of an urban warfare exercise (conducted in a simulated urban environment in Kaohsiung) involving infantry troops and military vehicles.

The government has also taken legislative steps to combat election interference from Beijing. In December 2019, it enacted the Anti-Infiltration Act, whose aim is to defend the nation against the threat of infiltration and interference by “hostile external forces” in order “to safeguard Taiwan’s sovereignty and uphold its free and democratic constitutional government.” The law defines hostile external forces as “countries, political entities, or groups at war with Taiwan or threatening Taiwan’s sovereignty by non-peaceful means.” From the discussion surrounding the bill, as well as its specific provisions, it is clear that the legislation is designed to deter and counter China’s attempts to shape the political landscape through disinformation and other gray zone tactics.

To counter maritime gray zone operations, Taiwan is bolstering coastal defense and stepping up cooperation between the coast guard and the navy. This includes patrols by Tuo Chiang–class corvettes that can be mounted with anti-ship missiles in a contingency situation.

Economic harassment poses a special challenge. To be sure, the ban on imports of Taiwanese pineapples sparked a consumer movement in Japan that boosted that nation’s imports of Taiwanese pineapples eightfold from the previous year. Similarly, a Taiwanese company recently purchased a large quantity of Lithuanian rum originally bound for China after it was reported that China was holding up imports of Lithuanian goods in retaliation for Lithuania’s decision to let Taiwan open a de facto embassy in Vilnius. Still, ad hoc responses like these, which depend on the goodwill of private businesses and consumers, cannot build Taiwan’s economic resilience over the long run. That will depend more on the success of broader efforts by Taipei to strengthen and diversify economic relations, as through the New Southbound Policy and the bid for membership in the Comprehensive and Progressive Agreement for Trans-Pacific Partnership.

During the 1990s, Beijing set its sights on a long-term nonmilitary resolution of the Taiwan problem. Faced with a strong US presence in the region, China lacked the military strength to seriously consider an invasion of Taiwan. Besides, it needed a stable international environment in which to pursue its policy of economic growth through “opening and reform.” The Chinese economy was surging (following the initial impact of the post-Tiananmen sanctions), and relations with the United States and other Western countries had stabilized. In 1997 and 1999, Hong Kong and Macao were returned to Chinese sovereignty under a “one country, two systems” formula. China’s leaders must have felt confident that Taiwan would eventually do likewise.

Since then, China has emerged as an economic and military powerhouse, but the prospects for peaceful reunification have receded as Taiwan has developed along its own path. That said, the international environment is scarcely conducive to a military takeover. China is perennially at odds with the United States and locked in a border dispute with India. Ties with Europe have been deteriorating as well. Beijing and Moscow have warmed toward one another, although they have not formed a military alliance. Were China to launch an armed attack on Taiwan at this time, the PLA could face a grueling and costly battle on multiple fronts, with the US military springing to the island’s defense, and neighboring countries like India moving their troops at the same time.

This is one reason Beijing has revived the strategy of “subduing the enemy without fighting,” in Sun Tzu’s words. China’s plan is to leverage its economic and military might to pressure Taiwan from all angles—cultural, psychological, political, and diplomatic, as well as military and economic. In this way it hopes to chip away at the Taiwanese people’s resolve until they eventually submit without a fight.

But the new emphasis on gray zone operations also reflects broader changes in the PLA’s approach to warcraft. There has been a clear and explicit shift in strategic direction, from the traditional emphasis on air, land, and sea operations to a multifaceted, integrated approach encompassing cyber, electromagnetic, space, and cognitive warfare. The use of gray zone aggression to place constant pressure on Taiwan is an integral aspect of China’s evolving military strategy.

Of course, Xi Jinping has refused to rule out the use of force, and it is reasonable to assume that China’s leaders would order an invasion of Taiwan if ever they judged that US forces in the region were either unable or unwilling to turn back such an assault.

With this in mind, Taiwan must not simply respond to China’s gray zone challenge but also prepare for a military contingency by building up the nation’s overall defense capability. That means upgrading and expanding munitions, reorganizing the armed forces, and conducting drills and exercises geared to a changing security environment. Taiwan is taking action here as well, with major increases in defense spending and plans to acquire and develop long-range missiles capable of directly attacking the mainland. Given the circumstances, it is the right direction for Taiwan.

The opinions expressed in this article are those of the author and do not purport to reflect the opinions or views of any organization he is affiliated with.

(Originally written in Japanese. Banner photo: Taiwanese President Tsai Ing-wen at a December 2021 military promotion ceremony, where she called on the newly promoted generals “to let the world know Taiwan will be resolute in defending itself.” © Walid Berrazeg/SOPA Images via ZUMA Press Wire/Kyodo News Images)