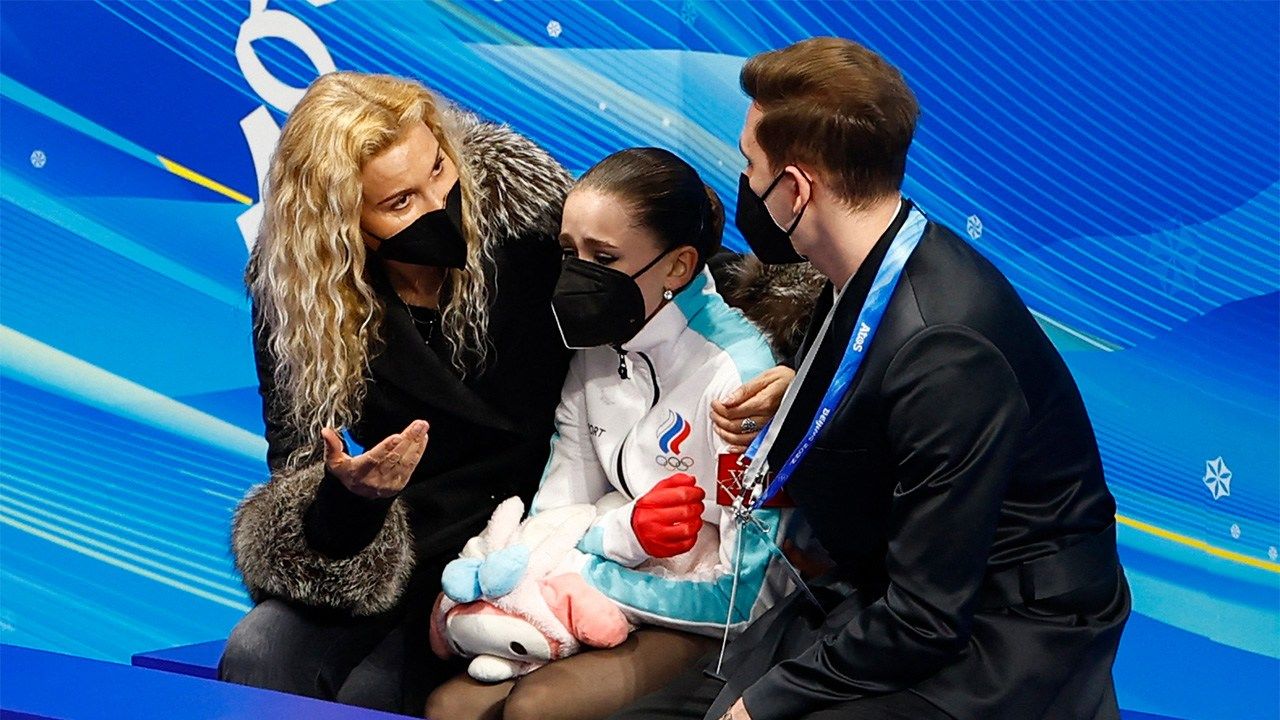 Sports Mar 1, 2022
The Olympic motto, “Faster, Higher, Stronger,” encapsulates the games’ mission of bringing competitors from around the world to pursue excellence. However, the Beijing Winter Games exposed a lack of transparency in dealing with impropriety, including the handling of rules violations and appeals against resulting decisions. The Olympics, long held to be the peak of global competition, is losing its fairness.

A Series of Inexplicable Decisions

Judges disqualified Japanese ski jumper Takanashi Sara after her first jump in the mixed team event because they found her suit to be in violation for being a mere two centimeters too large around the thigh. Athletes and support staff go through repeated rounds of trial and error in buoyancy and lift to find ways to increase jump distance as much as possible, and making suits that come in just under the regulations has become a standard technique. At the same time, authorities have established detailed and strict regulations to prevent cheating and maintain the fairness of the competition.

Game staff check every athlete’s jump suit before the competition, and afterward there are additional random checks. In the mixed team competition, a total of five athletes from four nations, Takanashi included, were found in violation. However, reports indicate that the inspection methods differed from the usual, with athletes being asked to remove the tights they wore under their suits. The Japanese team submitted an official position document to the International Ski Federation on proper inspection formats, but it remains unclear why the irregularity happened.

In the first round of the women’s parallel giant slalom in snowboarding, six-time Olympic veteran Takeuchi Tomoka was disqualified for interfering with the German competitor in her event. Both athletes crashed at the same spot, but the video replayed on television did not seem to show any contact between the two. However, Takeuchi, who reached the finish line first, was officially recorded as “Did Not Finish,” effectively disqualifying her from the competition.

“Six of the eight (judges) are German, so I figured I had no chance,” Takeuchi later commented. “It makes me wonder what exactly sportsmanship is supposed to mean, but I guess this is just one way that power comes into play at the Olympics.”

The losers were not the only ones who have expressed dissatisfaction.

Hirano Ayumu, who took gold in the men’s snowboarding halfpipe, was left scratching his head over the low score of his second run in the finals. He said, “I wonder what standards the judges are using. The athletes are putting their lives on the line in these runs.” He added that he hopes for more fairness for the athletes’ sakes.

For Hirano’s second run, he pulled off a difficult big trick called the Triple Cork 1440, but only earned a score of 91.75. In the third round, he performed the same routine and again hit the same big move, scoring 96.00 to win gold. Speaking after his victory, Hirano wondered, “What was the difference between the second and third runs?”

Judging confusion resulted in international tension, as well. In the men’s 1,000-meter short track speed skating semifinals, judges disqualified two South Korean athletes one after the other for lane change violations, allowing Chinese athletes to advance to the finals instead. Then, in the finals, the first-place finisher from Hungary was also disqualified, and China took both gold and silver.

The short track event involves extensive physical contact, and so some degree of fouling is almost inevitable. However, the unconvinced South Korean team announced their intention to appeal to the Court of Arbitration for Sport for a ruling on the decision, and an editorial in South Korea’s leading newspaper condemned the decision, saying among other things it was a plot to create achievements for Chinese president Xi Jinping. Viewers also quickly took to the internet with videos of the match and angry commentary.

Many of the world’s top-level sports have adopted instant replays and cameras in making decisions to mechanically compensate for the sometimes subjective eyes of referees. In soccer, there are systems like the Video Assistant Referee or Goal Line Technology that use multiple cameras and balls with built-in chips to judge whether goals are scored or not.

In baseball, the “request” instant replay system is now running in both the North American Major Leagues and Japanese pro baseball, helping to end the once-common brawls over bad calls. Tennis now allows players to issue a challenge over difficult in or out calls, and computer graphics help to clarify the outcome.

One thing that all of these systems share is that scores of fans are watching them play out on TV or over the internet. For international pro sports, truly global audiences scrutinize matches. Fans immediately respond to dubious calls by taking to social networking services and sharing their objections. The Olympics are also in the same era of scrutiny.

Machines are not yet perfect answers to human fallibility, though. In the men’s 500-meter speed skating, for example, there was a series of mysterious false starts in the final two pairs, where Japan’s Morishige Wataru and Shinhama Tatsuya raced. These games featured a new system with a single image tracking camera installed on each lane to monitor athlete and skate movement before the race starts. The system includes a detector that causes the starter pistol to flash a second time if it detects a false start, but on video replay no one could see any movement. However, since the high precision camera system indicated a false start, the judges trusted the system and upheld the decision. Still, video of the race showing the racers clearly taking off after the shot, but still getting a false start call, have started to circulate on the internet.

There was also controversy over machine judgment in curling. Small lamps are embedded in both sides of the stone’s handle to help judge if it has been thrown correctly. A player must release the handle before the hogline, which is about 10 meters from the hacks, or pushing-off points. If the throw is proper, the lamps light green. However, if the player releases after the hogline, the lamps go red. Violations disqualify the throw.

The lamp sensors at the latest Olympics were not working, and in many cases the athletes had to call referees over to make calls the old-fashioned way.

What is the good in adopting high-tech solutions if they actually increase the confusion in competitions? It seems there is still some way to go before machines can make the final call.

Doping is perhaps the ultimate form of cheating in sports, but the games this time saw a new issue arise from a blind spot in the rules.

15-year-old Kamila Valieva, skating for the Russian Olympic Committee, is one of the most notable skaters in women’s figure skating today, and the question over her eligibility due to doping violations was the most prominent issue of the games. News broke after her first skating run that a test sample taken at the Russian championships in late December of last year had come back positive for trimetazidine, a banned drug used for heart treatments.

The Russian Anti-Doping Agency put her under provisional suspension, but after objections immediately lifted it and allowed her to continue competing. The International Olympic Committee and World Anti-Doping Agency appealed the decision to the CAS.

Under the World Anti-Doping Code, competitors under the age of 16 are considered “protected persons” eligible for flexibility in punishment. The maximum suspension is two years, and the lightest punishment is censure. CAS took these points into consideration, ruling that it was appropriate for Valieva to compete. However, while she might only be 15 years old, Valieva is still one of the world’s top skaters. She is surrounded by a crowd of coaches, team doctors, and staff. There must be a thorough investigation into how a banned substance got into her blood.

Eventually, Valieva finished fourth after falling in the individual event, perhaps because of the emotional strain. The cameras captured an intense scene immediately after the free skate when her coach, Eteri Tutberidze, demanded to know, “Why did you give up in the middle? Explain the reason to me.” The emotional tension also appeared to get to 17-year-old ROC skater Alexandra Trusova, who took silver in the competition, as she broke down before the ceremony, saying, “Everyone has a gold medal, everyone, but not me. I hate this sport. I will never skate again.” It was a powerful scene that exposed the ugliness of the Olympics, which have become so obsessed with winning that they have lost their humanity.

In the end, there was no award ceremony during the games for the group competition, which the ROC won and in which Valieva competed. Since investigations into the doping violation continue, the games closed with the medal still in question.

Figure skating is being forced to deal with issues surrounding the young average age of competitors, including concern over burnout and injury. The International Skating Union is now considering a measure raising the minimum age for athletes in the Olympics and world championships from 15 (as of July 1 before the season) to 17.

A Doctrine of Victory Above All

The troubles that rocked these games are all rooted in the thinking that victory trumps all in the pursuit of excellence, while issues of nationalism and commercialism lurk in the background, as well. Media reports stir up medal contention and excitement, the hopes of a nation’s people rise, social media lights up, and then the pressure falls on athletes. Even with detailed rules, introducing mechanical referee aids, and stricter doping tests, sport fairness will be difficult to preserve without a spirit of fair play.

People are also starting to question athlete safety. The winter games are particularly full of acrobatic competitions. The snow walls for the halfpipe competition are set at 7.2 meters high, and top athletes can top those by over 5 meters during big air tricks. A height of 12 meters is roughly the same as the top of a four-story building. Yet there is little sense that sufficient thought has been given to safety when it comes to the danger of falls after a mistake.

It also seems as if the limits of competition technique are coming into view. In figure skating, Hanyū Yuzuru attempted a quadruple Axel time after time, but was unable to succeed. There is value in an athlete of Hanyū’s caliber attempting a world-first technique. However, if someone does manage to land a quad Axel, then will attention shift to who achieves a quintuple? When did figure skating become a sport about the number of spins in the air, anyway?

Last summer, at the Tokyo Olympic Games, the IOC added the word “Together” to the end of the Faster, Higher, Stronger motto. While it is an obvious attempt to encourage cooperation, it is also a sign that the traditional motto is showing signs of strain. It is now time for the people of the world, not just the IOC, to rethink the future shape of the games.

(Originally published in Japanese. Banner photo: ROC skater Kamila Valieva, at center, in tears after finishing the women’s free skate on February 17, 2022, in Beijing. At the left is her coach, Eteri Tutberidze. © Reuters.)