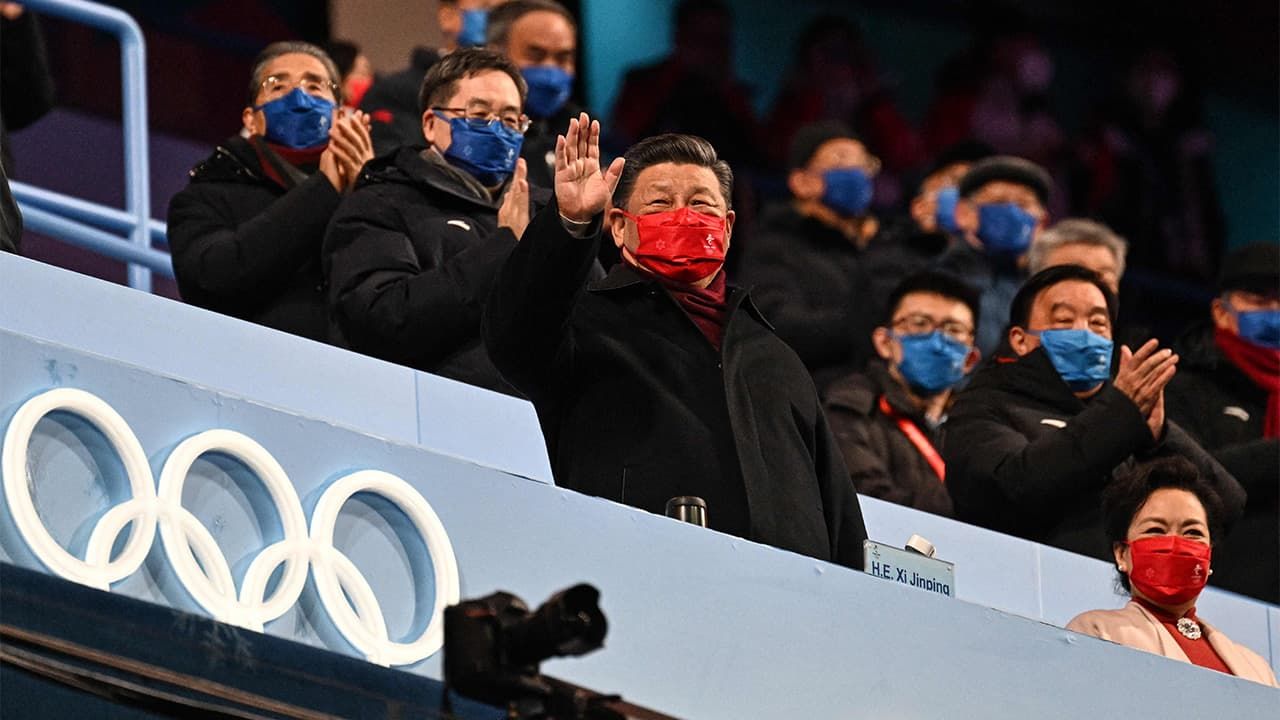 Politics Sports Mar 28, 2022
China’s political messaging was very much on show during the Beijing Winter Olympics, which was met with a diplomatic boycott by a number of countries. A journalist of Japanese media who viewed the games from within the country recounts the various forms of signaling.

In January, I started working in Shenyang in China’s northeastern Liaoning Province. As US-Chinese antagonism intensified, friction was growing over the upcoming Beijing Winter Olympics. I had a great interest myself in the games. I remembered four years earlier, when I had been reporting on the opening ceremony for the Pyeongchang Winter Olympics held in South Korea.

South Korean President Moon Jae-in called for a unified Korean team, and Kim Jong-un of North Korea, under his then title of Chairman of the Workers’ Party of Korea, accepted his overture. International Olympic Committee President Thomas Bach was persuaded via his desire to take credit for a “Peace Olympics,” so that shortly before the start of the Olympics, it was decided that the Korean contingents would enter the stadium for the opening ceremony together and a joint Korean team would participate in the women’s ice hockey competition.

Flag-bearers from the two countries carried a Unification Flag with a picture of the Korean peninsula, and led the athletes into the stadium. Spectators were excited to see a Korean team—even if it was the product of overlapping political motivations—making for an emotional atmosphere.

While many South Korean citizens were opposed to a reconciliation with the North driven by politics, the performance of this “peace festival” was effective to a degree.

How about the Beijing Winter Olympics, held in February 2022? The United States, Britain, Australia, and other countries announced a diplomatic boycott, whereby they did not send heads of state or other such representatives, due to Chinese actions in Xinjiang and other human rights abuses. Japan also did not send a government delegation.

At the opening ceremony on February 4, there were leaders from more than 20 countries, including Russia. The presence of heads of state from countries friendly to China and the absence of those from the Western bloc painted a clear picture of the planet’s deep divides.

Tensions over Ukraine were also rising at the time of the Olympics. Before the opening ceremony, Chinese President Xi Jinping held talks with Russian President Vladimir Putin. According to the Chinese Ministry of Foreign Affairs, Xi stressed that “China and Russia have stayed committed to deepening strategic coordination of mutual support and standing shoulder to shoulder for international fairness and justice.” Putin stated, “Russia stands ready to work with China to scale up strategic communication and coordination, [and] firmly support each other in defending sovereignty and territorial integrity.”

The Chinese-Russian joint statement declares that “Friendship between the two States has no limits, [and] there are no ‘forbidden’ areas of cooperation.” It also plainly notes that “The sides oppose further enlargement of NATO,” as Putin has asserted.

The opening ceremony took place just after I arrived in China, so I could not be present at the stadium, and I watched it on television instead. There was an unusual moment when the Taiwanese team made its entrance. The stadium announcer introduced the group, as normal, as from “Chinese Taipei,” or Zhonghua Taibei in Chinese, but the presenter for Chinese state television station CCTV used the name Zhongguo Taibei. The former name, preferred by Taiwan, means that the country is culturally Chinese, but the latter denotes that it is a part of the People’s Republic of China.

This situation was foreshadowed when Taiwan held for a time that it would not take part in the opening ceremony due to some Chinese government figures’ use of the name Zhongguo Taibei. Pleas from the IOC later persuaded it to participate.

While China allowed the use of Taiwan’s preferred name for external consumption, it used the name signifying the country was actually part of China for domestic audiences.

When the Taiwanese team entered the stadium, CCTV showed footage of Xi in the VIP seating. As the Hong Kong team followed, the cameras stayed on Xi. China criticized the diplomatic boycotts as a politicization of sports, but its opening ceremony included a number of political messages.

The finale of the opening ceremony involved powerful signaling, as the last Olympic torchbearer was Uyghur athlete Dinigeer Yilamujiang. The New York Times described this in a headline as a “provocative choice,” reporting that it “confronted head-on one of the biggest criticisms of the country’s role as host,” as the Western diplomatic boycott was based on the human rights abuses by the Chinese government against the Uyghur minority, including internment.

I too took the selection as indicating the government’s intent to pay zero attention to criticism from the international community regarding Uyghur human rights.

Zhao Lijian, the deputy director of the Chinese MOFA Information Department said in a press conference three days later that the choice showed that “China is a big family boasting ethnic unity.”

During the games, China’s blatant, political actions continued to catch the eye.

Olympic committee spokesperson Yan Jiarong stated in a February 17 press conference that stories of abuses against the Uyghur minority in Xinjiang were lies, and asserted that Taiwan was a part of China. There was criticism that such comments were inappropriate for someone speaking on behalf of the country’s government in a position that should be politically neutral.

Meanwhile, athletes were cautious about discussing human rights in China, after Yan had suggested they might be punished under domestic law.

In the initial selection process for the 2022 host city, concerns over huge costs were a factor in European cities with a strong winter sports tradition withdrawing their bids. Ultimately, only Beijing and the Kazakh city of Almaty remained for the final vote. Thus, Beijing became the first city to host both the Summer and Winter Olympics.

The IOC continued to cozy up to China. Prioritizing the smooth running of the games, it made no effort to encourage the country to address its human rights issues.

One memorable instance that symbolizes this attitude was when IOC President Bach was seen watching an event sitting with tennis player Peng Shuai, who disappeared for a period after posting on social media about a forced sexual encounter with a former high-ranking Chinese Communist Party member.

After the Olympics came to an end, China announced that the games were a great success. The state-run Xinhua News Agency hailed the cooperation of more than 1.4 billion Chinese people under the leadership of Xi Jinping and the CCP in overcoming the difficulties of holding the Olympics during the COVID-19 pandemic. The official CCP newspaper, the People’s Daily, stated that China had displayed an open and hope-filled image to the world.

China was able to hold the Olympics while keeping infection under control with its forceful zero-COVID policy. President Xi is expected to include the Olympic “success” as one of his achievements when he seeks an unprecedented third five-year term in the party congress in the second half of 2022. As the Beijing Olympics was planned and implemented by President Xi himself, as reported by Xinhua, for his government, it could always only have been a success.

Responding to the Invasion of Ukraine

The international community’s attention has shifted from human rights issues in China to the situation in Ukraine, which had grown increasingly tense during the Olympics. This may be a favorable development for China in a way, but it has struggled to settle on a response.

On February 24, Russia launched a full-scale invasion of Ukraine. The Chinese government has remained consistent in not denouncing Russia, and abstained from a United Nations vote condemning the country. It has also not recognized Russia’s action as an “invasion.” At the same time, previously it had maintained good relations with Ukraine.

On March 4, the Beijing Paralympics began. At the opening ceremony, attended by President Xi, part of the speech made by International Paralympic Committee President Andrew Parsons was not translated into Chinese by the simultaneous interpreter. The footage was cut from the internet broadcast.

With Russia’s invasion of Ukraine in mind, Parsons called for peace, saying, “The twenty-first century is a time for dialogue and diplomacy, not war and hate,” and that “The Olympic Truce for peace during the Olympic and Paralympic Games . . . must be respected and observed, not violated.”

His closing cry of “Peace!” was also untranslated. Commentators have seen this as indicating concern that his words might inspire censure of Russia and sympathy for Ukraine, leading to criticism of the Chinese response.

Fourteen years have passed since the Beijing Summer Olympics in 2008. China’s GDP has more than tripled, and its presence and voice on the international stage have grown accordingly.

And yet, it blocks unfavorable information so that it cannot be heard domestically. This may be a sign that the government is not as rock-solid as those around it believe. We must not forget that barbs about the politicization of sport could be pointed at China itself.

(Originally published in Japanese on March 14, 2022. Banner photo: Chinese President Xi Jinping waves from the VIP seats at the closing ceremony for the Beijing Winter Olympics on February 20, 2022. © AFP/Jiji.)