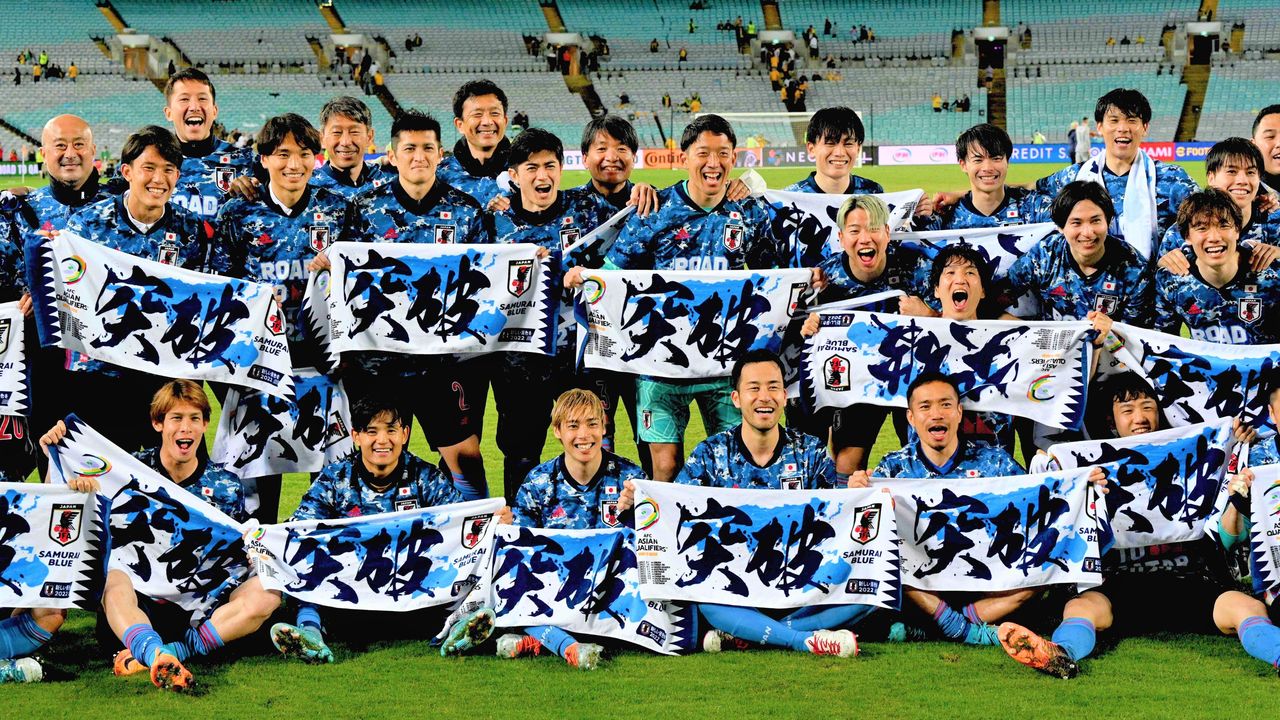 Sports Society May 16, 2022
While the Japanese men’s national soccer team secured its place at a seventh World Cup Finals in a row, most of the general public missed the decisive match in Sydney on March 24, which was only available to view via online subscription streaming service DAZN. In a major shift, not all of Japan’s games in the qualifying tournament were broadcast live on terrestrial television. Are such changes in the media landscape making sports a preserve of a privileged few?

Japanese national soccer team matches have traditionally drawn huge television audiences. This may no longer be the case as online platforms snatch up broadcasting rights. For this year’s FIFA World Cup finals in Qatar, scheduled to be played during November and December, most games in the Asia-Pacific qualifying tournament were only available for Japanese viewers to watch live via DAZN, the online subscription-based sports streaming service that has expanded globally since its launch in 2016.

Unlike previous qualifying tournaments, the only matches broadcast live via terrestrial networks were Japan’s home fixtures, which were shown on TV Asahi. This meant that the decisive penultimate game in Australia on March 24 was not available to a majority of viewers, who instead had to make do with a lackluster 1–1 home draw against Vietnam at Saitama Stadium five days later in the team’s final qualifying game. It was a turn of events that left broadcasters with no small amount of egg on their faces.

Another surprise was the fact that the Australia game was the only fixture from the entire qualifying campaign to be broadcast on the radio—in this case Nippon Broadcasting System—presumably because somebody realized that there simply had to be a free-to-air option for such an important match. But even this was limited to locations with signal coverage and was not available for smartphone streaming via the popular Radiko app.

For its Japan launch in 2016, DAZN paid a staggering ¥223.9 billion for 12 years of exclusive J. League broadcasting rights, lasting until 2028. The platform’s diverse sporting lineup also includes Japanese professional baseball, along with Formula One, tennis, basketball, and boxing.

A further 12-year contract with the Asian Football Confederation secured broadcasting rights for 14 individual tournaments, including FIFA World Cup qualifiers, along with the Asia Cup, and the Asian Champions League. For any such service seeking to do business in Asia, soccer is essential content.

Until earlier this year, DAZN charged a standard monthly subscription of only ¥1,925, but in late February it suddenly increased this to ¥3,000. Securing broadcast rights for such a broad range of sports is not cheap, and the price hike indicates that these costs are finally being passed on to users.

Another Tournament, Another Platform

But DAZN’s roster does not extend to the Qatar 2022 World Cup finals themselves, for which all 64 games are set to be shown free of charge by Abema TV, the internet TV service with backers including Cyber Agent and TV Asahi.

National Broadcaster NHK also won joint rights for 21 of these matches, including the opening game and the final, which are set to be shared between its terrestrial and satellite channels. TV Asahi and Fuji Television will also be screening 10 games each, but this leaves 23 matches throughout the tournament that will not be aired on mainstream TV.

World Cup broadcast rights have been steadily increasing in price for some years now. For France ‘98, the first finals tournament for which Japan’s men qualified, NHK paid FIFA a mere ¥600 million for full domestic coverage. While an official figure for this year’s tournament has not been made public, daily sports tabloid Sports Nippon in its February 4 edition reported this year’s figure to be somewhere in the region of ¥18 billion, representing a 30-fold increase.

Broadcast rights for the World Cup finals and Olympic and Paralympic games have traditionally been sewn up by the so-called Japan Consortium, an alliance between NHK and several public broadcasters. But with Nippon Television, TBS, and TV Tokyo having recently left that umbrella, and costs for World Cup broadcasters continuing to soar, it seems the return on investment was simply not deemed sufficient to justify the necessary outlay this time.

According to a Tweet by Fujita Susumu, CEO of Abema TV’s parent company Cyber Agent, the World Cup bid represented the largest single investment in the network’s history. And while the precise figure paid remains unclear, it is bound to be far from straightforward to turn a profit on that expenditure. But, from Abema TV’s perspective it was clearly a risk worth taking in order to dramatically expand awareness of the platform.

Not long after Japan secured its spot for Qatar 2022, Tashima Kōzō, president of the Japan Football Association voiced a belief that the government should step in with new regulatory guidelines to ensure that the tournament was available on free-to-air platforms.

But in truth the media landscape has been changing for some time. From the 1990s onwards, terrestrial TV was gradually augmented by BS and CS satellite channels, while the expansion of cable TV broadened viewing options still further. This evolution has continued in recent years with the availability of smartphones and tablets and ever-improving network technology, ushering in the age of mobile internet TV.

If things are left purely to market forces, the steady migration of sporting content to paid online platforms seems inevitable.

For example, Amazon Prime Video in Japan streamed the April 9 middleweight boxing clash at Saitama Super Arena between Kazakhstan’s IBF world champion Gennadiy Golovkin and Japan’s WBA super champion Murata Ryōta. It was actually the subscription service’s first foray into live sporting content, having concluded a multi-fight deal with Murata’s promoters that prized the domestic broadcast away from the fight’s global rights holder DAZN—just another example of how sports are becoming a key battleground for online streaming services.

It may seem like stating the obvious to describe all this as a sign of the times. But what seems equally clear is that the sporting world is no longer able ignore ongoing changes in the media landscape. However, besides embracing such deals as a key source of revenue, governing bodies must also be mindful of how to maintain their sports’ popularity.

Back to the topic of soccer, I wonder if children across Japan have been able to follow the national team’s successes throughout this year’s World Cup qualifying campaign. Though many elementary schoolchildren might well have smartphones of their own, it is hard to imagine them being signed up for paid subscription services. And this elimination of chance encounters with soccer simply through turning on the TV seems likely to limit engagement with the sport in a way that may ultimately reduce the playing population.

When Japan made its first appearance at a World Cup finals in 1998, the entire team was composed of J. League players. But of the 26-man squad for last month’s crucial qualifying game in Sydney, 18 play with European clubs.

Along with a lack of opportunities to see Japan’s national team on TV, even the J. League provides only limited scope to see the country’s top players. And while avid followers will no doubt stump up for paid subscription services, it seems certain that children and casual fans will have fewer chances to engage with the sport.

What JFA President Tashima Kōzō probably had in mind when he described the need for new regulatory guidelines regarding World Cup coverage was something akin to the systems seen in some European countries. These mandate that live coverage of key sporting events be made available on free-to-air platforms, and this ideal of universal access stems from the idea that the chance to follow certain sporting events should be a basic, inalienable right of all citizens.

In 1996, the UK government introduced the Broadcasting Act, which guaranteed free-to-air coverage of designated events dubbed the “crown jewels of sport.” These were divided into Category A events mandated for live terrestrial broadcast (though with some scope for simultaneous additional coverage by paid channels) and Category B events available for exclusive live coverage on paid platforms as long as highlights or video-delayed coverage is provided free-to-air.

Category B, meanwhile, covers home nations’ World Cup and European Championship qualifying games, along with the IAAF World Championship athletics, the British Open golf, and non-final tournament games at both Wimbledon and the Rugby World Cup.

From the 1990s onwards, a service owned by global media tycoon Rupert Murdoch began to dominate the UK’s burgeoning subscription satellite TV market, acquiring the broadcast rights for various sporting events along the way. Likewise in Germany, Italy, Spain, and elsewhere the influx of satellite TV money brought tremendous growth for soccer as a business. But at the same time, the resulting decline in opportunities to engage with the sport also brought fears of a possible disconnect from the general public.

Meanwhile, though the broadcast rights for the Olympic Games also continue to grow in value, the International Olympic Committee still stipulates a guaranteed level of free-to-air coverage in all territories. The rationale for this is that a shift to purely fee-based broadcasts would put enjoyment of the Olympic spectacle beyond the reach of viewers in poorer nations, thereby compromising the IOC’s mission of promoting global peace through sports.

In Japan, however, while the concept of sports coverage as a public resource and the ideal of universal access have only limited currency, recent events have begun to spark debate on the fundamental importance of sports. And if sports are ultimately deemed a key way to enrich lifestyles, it seems clear that further discussion is warranted on how best to protect such crucial social assets for generations to come.