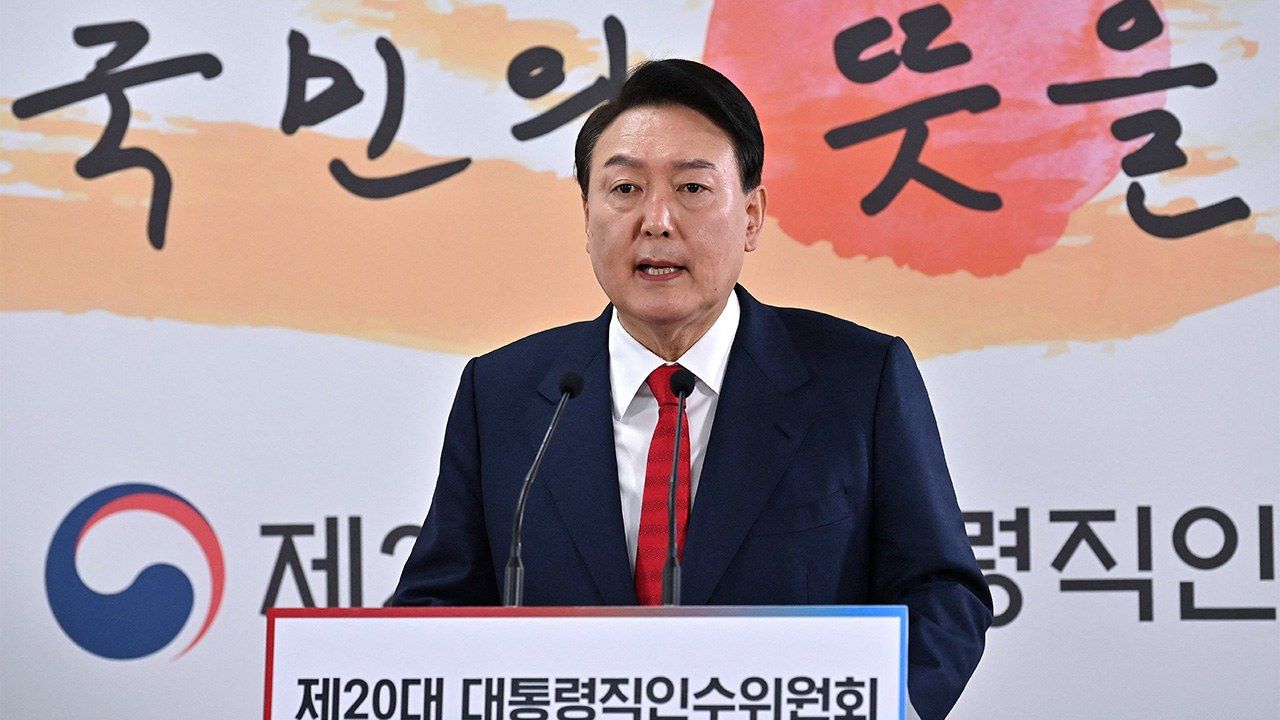 Politics May 25, 2022
Yoon Suk-yeol’s inauguration as president portends a new foreign policy orientation for South Korea. Korea specialist Kimura Kan argues that the Yoon administration is likely to be more regionally and globally proactive due to its greater confidence in Korean national power.

On May 10, 2022, Yoon Suk-yeol became South Korea’s newest president. Prior to Yoon’s inauguration, Professor Park Cheol-hee of Seoul National University wrote the following: “Korea is a more internationally capable country than we think. It is time to put into practice ideas and actions commensurate with those capabilities. Only then can we win the respect and confidence of the international community.”

Professor Park’s words are particularly notable owing to his influence as President Yoon’s “diplomatic brain.” Park, a leading South Korean scholar of Japanese studies, was also the only person dispatched by Yoon to both the United States and Japan as a member of his official post-election delegations.

The conservative Yoon Suk-yeol replaced the progressive Moon Jae-in after the latter completed his single five-year term. The Moon administration pursued a foreign policy that predominantly emphasized dialogue with North Korea to achieve peace on the Korean Peninsula. These efforts led to the dramatic inter-Korean summit in 2018 and the first-ever meeting between the leaders of the United States and North Korea in Singapore the same year.

President Moon Jae-in, however, appeared to show little interest in geopolitical issues beyond the Korean Peninsula. Typical of this was South Korea’s indecisive diplomacy toward China even as the United States adopted a more confrontational stance toward Beijing.

To be sure, this indecisiveness was not due to South Korea showing greater diplomatic consideration for China over the United States. Moon fully understood the importance of American cooperation for realizing substantive dialogue with North Korea. The relationship with the United States was, however, mainly valued in terms of its importance for making progress on inter-Korean issues.

President Moon was also cautious about engaging China in reaching out to North Korea for dialogue. China, after all, is also a rival for influence in Pyongyang. The Moon administration was also less enthusiastic about pushing economic cooperation with China. This was a clear departure from his conservative predecessor, Park Geun-hye, who once visited China on a dramatic diplomatic mission with many of South Korea’s business leaders in tow.

A major factor in the Moon administration’s indecisive Sino-American diplomacy was the confrontation over the deployment of the Terminal High Altitude Area Defense system. Tensions flared up in 2016 near the end of Park Geun-hye’s administration as THAAD deployment to the Peninsula was confirmed. As China effectively imposed economic sanctions as retaliation, the previously favorable perception of China in South Korea rapidly eroded and South Korean companies began to look elsewhere for markets and investment opportunities. In fact, South Korea’s economic dependence on the Chinese economy peaked and began to decrease during the Moon administration. Therefore, Seoul now possesses greater strategic autonomy compared to Japan, whose dependence on China has only deepened over the last five years.

Despite being highly cautious of China, Moon was nevertheless reluctant to participate in American-led containment of the powerful neighbor.

The logic of the Moon administration’s geopolitical approach seemed to go like this: while China is an unreliable partner, it is irrational to unnecessarily provoke Beijing while China remains a threat capable of damaging the South Korean economy. Rather, Seoul should distance itself as much as possible from geopolitical tensions surrounding China and concentrate on Korean Peninsula–related issues. In this context, the US-Korean relationship should be viewed as a “limited alliance” focused on North Korea. Any expansion of the scope of South Korea’s military activities and diplomatic commitments only places greater burdens on Seoul while bringing little in return in terms of achieving the ROK’s primary aims.

Moon’s indecisive and at times contradictory foreign policy towards China is an outgrowth of this logic, which is predicated on a low estimation of Korean national power and international influence. This lack of confidence in South Korean capabilities was an important factor influencing the country’s diplomacy before the Moon administration as well.

As Yoon’s diplomatic brain Park Cheol-hee indicates above, however, the Yoon administration has greater confidence in South Korea’s national strength and international influence. The new administration seems to worry that, if the nation narrowly confines its strategic concerns to the Korean Peninsula and only concentrates on its own security, it will lose the opportunity to play an active role in the international community. Furthermore, the belief within the Yoon administration is that Korea is now a “great power” capable of playing a variety of roles on the global stage and should therefore broaden its strategic and geopolitical horizons.

Seoul is therefore highly likely to adopt greater international proactivity in its foreign policy in the coming years. This could represent a more historically significant turning point for South Korea than is usual during a transition from a progressive to a conservative administration. It could mean that South Korea, which suffered through colonial rule, and after independence, continued to suffer division, conflict, and serious economic difficulties due to the Cold War, will now itself become more actively involved in international power politics.

South Korea currently ranks tenth in the world in terms of the size of its economy. Only the Group of Seven nations and the two most populous nations, China and India, have higher GDPs than South Korea. As of 2020, South Korea’s military spending is also the world’s tenth largest, higher than even Italy and Canada. This spending continued to grow throughout the COVID-19 pandemic, and in 2021 it overtook Japan. South Korea is now comparable to Germany and France in terms of defense outlays. Clearly, the ROK is no longer the small, poor, unstable, Far East country it used to be viewed as.

How will a South Korea that perceives itself as a regional or global power pursue foreign policy going forward? There are three possible approaches.

The first approach is to adopt new language but limit the expansion of new international roles. Clearly, Seoul’s relationship with its American ally will remain of paramount importance to South Korean security, and the administration’s conservative political base expects the maintenance of robust relations. Furthermore, as long as relations with the United States remain strong, South Korea may not be greatly affected by American diplomatic maneuvering outside the Korean Peninsula. Currently, the United States has its hands full with the Ukraine issue and is not in the position to take more aggressive measures against China. For the time being, Seoul may only need to “gesture” toward being willing to cooperate with Washington’s agenda of pressuring Beijing while itself remaining somewhat passive.

The new administration and prominent officials have already expressed interest in actively participating in frameworks intended to restrain China’s burgeoning power, such as the Quad and the CPTPP. If South Korea followed through, its geopolitical standing in the region would rise to the level of Japan, India, and Australia. It would require, however, an enlargement of the scope of its economic and military activities. The South Korean government may even consider deploying its military beyond the waters around the Korean Peninsula and project power into the East China Sea, the South China Sea, and throughout the Indo-Pacific region.

This second approach represents a pathway for South Korea to become a “regional power.” Judging from initial comments and actions taken by the Yoon administration, there is a strong possibility that this will be the strategy eventually adopted.

South Korea as a “Global Power”?

A third approach that the new administration could pursue would be even more ambitious, positioning South Korea as a “global great power.”

Seoul’s contributions to managing the Ukraine crisis will function as the gauge for whether this approach gains salience in years to come. Near the end of the Moon administration, Seoul was in step with other Western countries in sanctioning Russia and accepting refugees from Ukraine. However, the previous administration did not show any willingness to become more involved. The relative lack of South Korean public interest in events in Europe, which is far removed from the Korean Peninsula, likely played a role in this more passive approach to Ukraine.

Nevertheless, if South Korea is to become a truly trusted and influential country, active involvement will be necessary. For example, if Seoul were to provide robust military assistance to Ukraine—which Japan and many other countries have failed to do—international appreciation for its contributions could quickly raise South Korea’s status, placing it alongside the G7 nations.

In South Korea, where the Korean War has not legally ended and is frozen in place by an armistice, public opinion toward overseas military dispatch is relatively permissive. As one administration insider noted, “through political leadership, public sentiments can be molded” to gain support for a more proactive agenda. It is interesting that such ambition is emanating from the new administration.

These three approaches represent different options that Seoul could select as the new government rethinks South Korea’s orientation to regional and global geopolitics. While enhancing the country’s international prestige might be desirable, the question still remains as to whether the Yoon administration and the South Korean people are prepared to assume greater international burdens and take greater risks. Observers should remain attentive to how the new administration and influential insiders forge a new approach—and potentially even a new South Korean international identity.

(Originally published in Japanese on May 9, 2022. Banner photo: Yoon Suk-yeol holds a press conference in Seoul on March 20, 2022, after being elected South Korean president. © AFP/Jiji.)