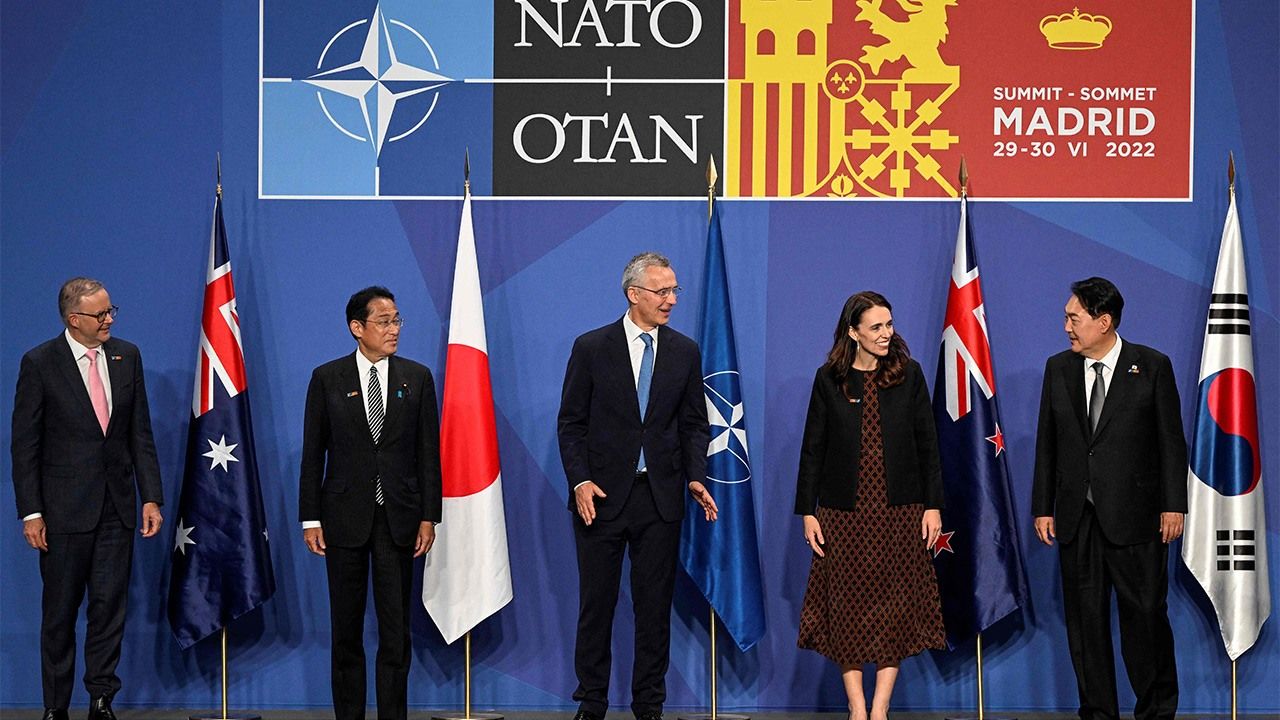 NATO-Japan Cooperation: A New Opportunity for Building Bridges Between US Allies

Politics Aug 9, 2022
Russia’s invasion of Ukraine has focused renewed attention on Japan’s relationship with NATO. In revising its Strategic Concept to address the ongoing crisis in Europe, NATO also expressed concerns about the systemic challenge posed by China for the first time. The war in Ukraine and NATO’s increasing concerns about China provide an opportunity for Japan to participate in the building of bridges between American alliances in Europe and Asia.

A notable feature of NATO’s Madrid summit at the end of June 2022 was the attendance of Japanese Prime Minister Kishida Fumio alongside the leaders of Australia, New Zealand, and South Korea. Despite Russia’s ongoing war in Ukraine, the presence of these nations represented greater NATO interest in security challenges in the Indo-Pacific. The medium- to long-term challenges presented by the People’s Republic of China also featured at the summit, providing Prime Minister Kishida with the opportunity to emphasise the indivisibility of European and the Indo-Pacific security.

How has the relationship between Japan and NATO developed up until now? What are the future possibilities for NATO and the Japan-US alliance to work together?

Official high-level NATO-Japan dialogue dates back to Intermediate-Range Nuclear Forces (INF) discussions in the 1980s. Most notably, at the 1983 Williamsburg Summit, it was Prime Minister Nakasone Yasuhiro who declared that the security of the summit participants was indivisible. Although the focus of the two summits are different, Prime Minister Kishida’s words in Madrid resonate with Nakasone’s in Williamsburg.

Dialogue between Japan and NATO was institutionalized in the 1990s. However, Europe was preoccupied with the conflict in the former Yugoslavia and plans to admit Central and Eastern European states to NATO and the European Union. There was little sense that Asian security would have an impact on Europe. The same was true for Japan about Europe, although Japan’s role in international security was limited in any case.

The 9/11 terrorist attacks changed this situation. Japan sent Maritime Self-Defense Force vessels to the Indian Ocean to resupply American military ships and those of European and other partners supporting military operations in Afghanistan. NATO as an organization then became directly and deeply involved in Afghanistan when it took over command of the International Security Assistance Force in August 2003. Tokyo would not deploy the Self-Defense Forces to Afghanistan itself, but it later cooperated with NATO in civilian post-conflict reconstruction. Japan and NATO thus met in the middle in the Indian Ocean and Afghanistan.

From the late 2000s through the early 2010s, numerous high-level meetings on Afghanistan were held as part of NATO summits and ministerial meetings. NATO’s partner countries, including Japan, were invited, meaning the focus on Afghanistan helped establish precedents for NATO’s cooperation with non-European partners on global issues. Foreign minister Genba Kōichirō, for example, attended the Meeting on Afghanistan at the NATO Chicago Summit in May 2012.

When NATO Secretary General Anders Fogh Rasmussen visited Japan in April 2013, NATO and Japan agreed to a Joint Political Declaration. This was soon followed by the Individual Partnership and Cooperation Program between Japan and NATO in 2014, subsequently revised and renewed in 2018 and 2020. The IPCP declares both sides to be “reliable and natural partners, sharing common values of freedom, democracy, human rights and the rule of law,” and calls for strengthening high-level dialogue and greater defense cooperation and exchanges between Japan and NATO. Priority areas for cooperation outlined include cyber defense, maritime security, humanitarian assistance and disaster relief, arms control, non-proliferation and disarmament, defense science, and technology, among other areas of practical cooperation.

The Russia-Ukraine War and the China Challenge

Japan has since built up a track record of participation in NATO activities such as seminars, exercises, and joint naval training focused on these areas of practical cooperation. Prime Minister Kishida’s participation in the NATO summit this June, however, represented an important opportunity to heighten Japanese interest in NATO itself and Japan-NATO relations. The background to this is, of course, the war between Russia and Ukraine.

The Kishida administration framed from the outset alignment with the G7 as central to its response to Russia’s invasion. Nevertheless, all G7 members other than Japan (and the EU, a participant in G7 summits) are NATO allies. Indeed, the G7 summit in March this year was held in conjunction with the NATO summit and met at the alliance’s headquarters in Brussels. For North America and Europe, the G7 constitutes the major NATO allies plus Japan, while for Japan, cooperation with NATO represents a natural extension of its partnerships among the G7 nations.

The Kishida administration has emphasised the indivisibility of the European and Asian security domains and argued that “today’s Ukraine might be tomorrow’s East Asia” in its messaging in response to the war in Ukraine. Stressing Japan’s opposition to attempts to change the territorial status quo with the use of force anywhere in the world, Kishida has highlighted the need to avoid sending the wrong message that acts of aggression would be tolerated or could be successful, thereby encouraging military aggression. The prime minister has therefore very consciously aligned Japan with NATO’s position.

It is therefore significant that NATO’s Strategic Concept adopted at the Madrid summit referred to China for the first time since the organization’s inception. In addition to expressing concern about Sino-Russian relations, hybrid warfare, cyber security, and technology challenges, the new Strategic Concept explicitly noted that China’s “stated ambitions and coercive policies challenge our interests, security and values.” While NATO claimed it remains “open to constructive engagement with the PRC,” the document nevertheless made it clear at the same time it would act to safeguard its security interests. Looking beyond current tensions with Russia, the Strategic Concept positions China as a “systemic” challenge, in the process laying down the conceptual foundation for future NATO-Japan cooperation.

When thinking about strengthening Japan-NATO relations, many Japanese often ask whether NATO would actually offer military support if a security contingency were to arise in Asia. Tokyo’s response to Russia’s invasion of Ukraine and support for Europe’s approach indicates that it does expect Europe to show at least the same degree of solidarity with Japan as Japan is currently showing for Europe if a large-scale contingency involving China arises.

Nevertheless, it is unreasonable for Tokyo to expect NATO to intervene on Japan’s behalf when Japan is unwilling to dispatch combat forces overseas to defend NATO members. Furthermore, Article 6 of the North Atlantic Treaty defines the scope of collective defense commitments outlined in Article 5 as being the territories of the parties “in the North Atlantic area north of the Tropic of Cancer.” This is traditionally interpreted to include the American mainland but not Hawaii or Guam. This would, for example, seem to rule out NATO treaty obligations being invoked in the case of a Taiwan contingency.

However, this is purely a legal argument. If conflict over Taiwan went beyond the level of hybrid warfare to become a direct military clash between American and Chinese forces, Japan would become vulnerable to direct attack, and it is quite possible that Britain and other allies with close ties to the United States would also be drawn in. In such a case, the geographical limits to a coordinated military response in the North Atlantic Treaty would not be an issue. This is because the exercise of the right of collective self-defense is an inherent right of all nations recognized under the United Nations Charter. Regardless of alliance relationships or geography, if Taiwan is attacked, then other nations can invoke the right of collective self-defense.

What this suggests is that Japan’s relationship with NATO is not just one shaped by NATO as a multilateral organization but is also a venue for deepening relations with individual NATO members interested in Indo-Pacific security.

The significance of NATO as a multilateral institution should not be underestimated, however. After all, NATO as an organization has accumulated 70 years of experience in multilateral operations and planning that could be relevant to cooperation during a military contingency in East Asia.

Japan’s security has traditionally been viewed through the bilateral lens of the US-Japan alliance. This is unlikely to change in the foreseeable future. Leaving aside the possibility that Japan is the sole target of an armed attack and invokes Article 5 of the US-Japan Security Treaty for American assistance, one likely scenario for a high-end armed conflict in the region would involve Taiwan, Australia, and Britain in addition to the US military.

Cooperation and familiarity among multiple actors would in this case be essential. For the United States, NATO is the multilateral template for implementing plans for combined operations. How to plug American NATO allies like Britain and France into the Indo-Pacific US-Japan and US-Australia alliance frameworks will be a crucial challenge to overcome. Enhanced bilateral cooperation between Japan and countries like Britain are useful first steps, but enhanced relations with NATO as an organization would help expand the circle of Japan’s relationships with other US allies in Europe and its ability to grapple with the complexity of operational coordination.

Such engagement would also connect together the NATO and US-Japan alliances, or, in the words of the Biden administration’s Indo-Pacific Strategy , “build bridges between the Indo-Pacific and the Euro-Atlantic.” The NATO Asia-Pacific Leaders’ Meeting among Australia, Japan, New Zealand, and South Korea, called the AP4 (Asia-Pacific 4), that took place on the sidelines of this year’s Madrid summit therefore carries added significance.

Traditionally, most security frameworks in the Indo-Pacific have centered on bilateral cooperation with the United States. There has been some movement toward broader frameworks recently, including the US-Japan-Australia trilateral and the “Quad” framework, which adds India. The recent AUKUS agreement is particularly notable not only for its intended aim to provide Australia with nuclear propulsion options for its submarines, but also for linking the United States’ closest allies in Europe and the Indo-Pacific.

We can find greater potential in and strategic rationales for the deepening of Japan’s relations with NATO when placed in this context, where new forms of “minilateral” cooperation among smaller sets of actors are beginning to shape the strategic landscape of the region.

To promote substantive dialogue and cooperation, it is important to go beyond the areas identified in the Individual Partnership and Cooperation Program (such as cyber and maritime security) to discuss higher end military issues, such as countering Russia and China’s anti-access and area denial (A2/AD) capability and the need for ground-launched intermediate-range missiles. At the same time, joint training and exercises involving Japanese and NATO forces will also need to progress beyond an ad hoc, friendship ones to more high-end and robust training and exercises. A strategic framework for promoting concrete forms of cooperation will therefore be a must going forward.