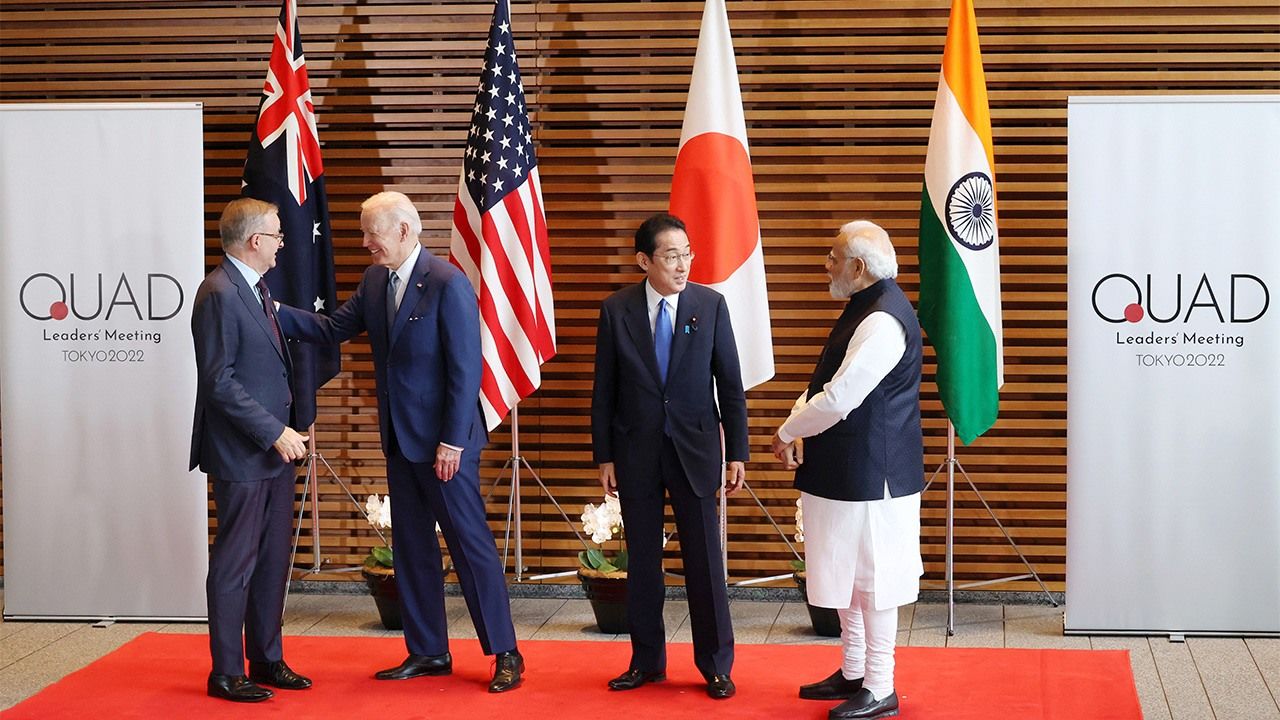 Politics Sep 9, 2022
In May this year, the leaders of the four Quad countries—Japan, India, Australia, and the United States—gathered in Tokyo as Indian Prime Minister Narendra Modi visited Japan for the first time in four years. An overview of India’s foreign policy strategy as a member of the rebooted Quad.

An Eye on Russia

In May this year, the leaders of the four Quad countries (the United States, Japan, Australia, and India) gathered in Tokyo for the second ever face-to-face meeting of the grouping. The Quad has had a stop-start history. It was launched in early 2007 before being put on the backburner later in the year. It was reinvigorated again in 2017, although the leaders of each of the four countries did not officially meet in the Quad format until 2021. Recent developments point to the Quad evolving beyond a forum for discussion and taking shape as a concrete framework for cooperation among the four countries.

It is important to note that India has traditionally had quite a different approach to international relations compared to the other three Quad nations. During the Cold War, India cooperated closely with the Soviet Union while hoisting the banner of “non-alignment.” India has remained sensitive to its relationship with Russia in the post–Cold War era as well, even avoiding condemning Russia’s war against Ukraine. On the other hand, due to increasing concerns about border tensions with China, in recent years India has strengthened its security cooperation with the United States, Japan, Australia, Vietnam, and other countries that share its threat perception toward China.

Recent events in Ukraine have precipitated growing interest in Japan around India’s distinct strategic approach of strongly expressing its commitment to the Indo-Pacific and the Quad while maintaining relations with Russia. Below I discuss some important elements of India’s approach to the Quad.

India and the Quad: Key Events

Table created by author based on information from the Kantei website

When the Quad was first established in 2007, India and Australia were both viewed as reluctant participants. This was because India pursued quite a different policy toward China at that time.

Although India’s relations with China were beginning to deteriorate around 2005 due to the border dispute, the Indian government nevertheless was still proactively committed to bilateral economic cooperation and engaged in global forums with China. Due to worries about damaging relations with China, the first Quad initiative therefore disappeared as India followed Australia out the door. Low expectations regarding Australia’s commitment were ultimately a factor giving New Delhi pause.

The Quad was rebooted in November 2017 in Manila with a meeting of senior officials (director-general level). The meeting took place against the backdrop of China’s maritime expansion and Japan’s promulgation in 2016 of a “Free and Open Indo-Pacific” strategy that envisaged strengthening security cooperation between Quad countries. During the decade between the two iterations of the Quad, India’s geopolitical situation changed considerably—it is probably not too strong to say that India now views China as an enemy rather than simply as a potential rival.

Shaping the Quad Through Nonmilitary Cooperation

India nevertheless remained somewhat cautious as it approached Quad 2.0. This prudence was an outgrowth of concerns that overdependence on the United States could erode India’s strategic autonomy without really helping the country deal with its border dispute with China.(*1) After all, the threat that China poses to India is land-based, while the Quad and Indo-Pacific frameworks are maritime in nature. India’s participation in these frameworks and any resultant maritime tensions could worsen India’s security due to strategic blowback on India as it seeks to manage its land border dispute with China.

Therefore, commentators on India’s foreign relations believed in 2017 that India would prefer to see the Quad remain a working level consultative framework that did not lead to a summit-level meeting like the BRICS.

New Delhi’s own Indo-Pacific conception suggests that India remained focused on constructive relations with China. While Prime Minister Modi officially announced India’s commitment to a “free, open, and inclusive” Indo-Pacific policy in June 2018,(*2) the Indian government actually began using the term Indo-Pacific around the end of 2017, which coincides with the reboot of the Quad. In India’s formulation, the Indo-Pacific is an inclusive framework for cooperation rather than an exclusive one,(*3) and India’s specific Indo-Pacific Oceans Initiative has been promoted as a framework for open cooperation in nonmilitary domains while keeping in mind the need to respond to the challenges posed by China.

Reflecting on the outcomes from the May 2022 Quad leaders’ summit in terms of the Indian government’s traditional strategic approach, several general observations can be put forward.

First, India appears to have succeeded in shaping the development of the Quad and its initiatives based on its own policy preferences. Reflecting India’s Indo-Pacific policy vision, the areas of cooperation agreed to during the 2022 Quad summit reflected its desire for open cooperation in nonmilitary areas. Furthermore, the Indo-Pacific Economic Framework announced at the Quad summit, while technically separate from the Quad, is also a forum that allows participants to sign up to specific areas for cooperation, making it similar to the IPOI of the Indian government. This makes it considerably easier for India to participate in this framework given it can pick and choose how it engages.

Second, New Delhi does appear to have become more committed to the Quad. Although the areas of cooperation announced at the summit meeting are still ostensibly restricted to cooperation in nonmilitary areas, such as maritime and outer space information sharing, these are areas that are nevertheless intimately tied to military operations. Such moves indicate that the Indian government’s sensitivity to maintaining stable relations with China has waned somewhat over the past few years.

This deterioration of relations between India and China has been a notable driver of India’s engagement with the Quad.(*4) In particular, the 2020 clashes in the Indo-China border region of the Galwan Valley decisively worsened public opinion in India toward China and had a considerable impact on India’s China policy.

In the economic policy domain, India’s Quad and the Indo-Pacific policies do show some reticence about cooperation with China. India has a huge trade deficit with China which has made reducing imports from China and the promotion of domestic manufacturing a central focus of New Delhi’s new comprehensive economic policy titled “Self-Reliant India” (Atmanirbhar Bharat) announced in 2020.

As a final note, I would like to make two points for readers outside Japan about how India’s policy responses to Russia’s war against Ukraine and the recent Quad summit have been interpreted in Japan.

First, it was clear that, except for a few experts, the discourse on India’s foreign policy in Japan betrayed insufficient understanding of India’s complex balancing act. For example, one international relations scholar asserted that India’s behavior around the conflict in Ukraine could be understood based on the (mistaken) premise that India sees Pakistan as more of a threat than it does China. There is also a misconception of that nonalignment characterizes India’s policy today in the same way it did in the Cold War.

Second, some Japanese commentators who have in recent years propounded India’s importance as a partner in the Indo-Pacific and the Quad were clearly puzzled by India’s response to current events in Europe. For example, New Delhi’s rejection of a plan to transport UN humanitarian aid supplies through Mumbai by Japanese Self-Defense Forces aircraft to assist evacuees from Ukraine was widely reported in Japan, creating a negative impression and resulting in doubts about and criticism of India. Although the Indian Foreign Ministry spokesperson later explained that the rejection was due to an administrative misunderstanding,(*5) the Japanese media continued to report that the working-level agreement to allow the SDF to operate in India for the humanitarian mission was overturned due to a high-level political decision by Indian ministers.

(Originally written in Japanese. Banner photo: The leaders of the four Quad countries pose for a commemorative photo before the May summit. From left: Australian Prime Minister Anthony Albanese, US President Joe Biden, Japanese Prime Minister Kishida Fumio, and Indian Prime Minister Narendra Modi. Taken at the Kantei on May 24, 2022. © Jiji.)

(*1) ^ An example of such arguments can be found in Manoj Joshi, “Why India Should Be Wary of the Quad,” The Wire, November 13, 2017, https://thewire.in/diplomacy/india-us-japan-australia-quadrilateral-alliance.