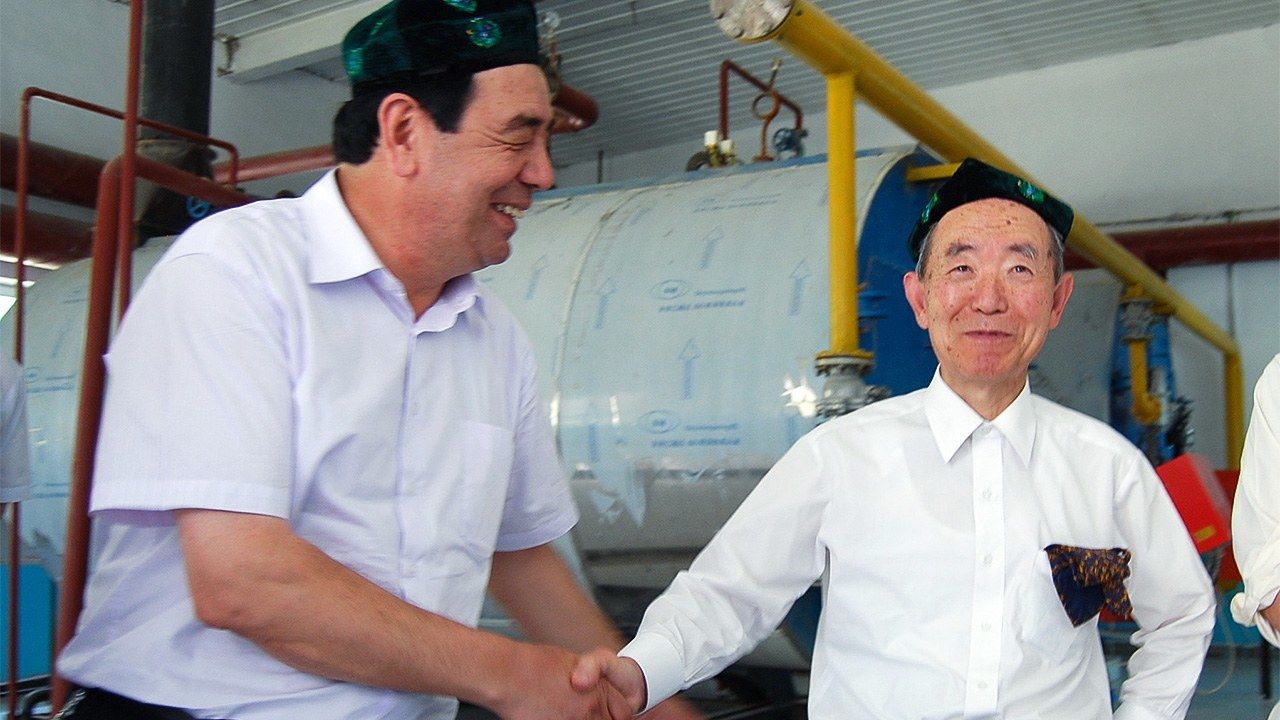 Politics Sep 12, 2022
Earlier this year, Tokyo wrapped up 42 years of Official Development Assistance to Beijing. This article reflects on the historical significance and impact of Japan’s ODA to China, which totaled ¥3.66 trillion over the decades.

Forty-two years of Japanese ODA to China ended in March this year. While this ODA supported China’s economic development and strengthened Sino-Japanese ties, over time it was increasingly questioned at home. Criticisms focused on the necessity of the assistance in the first place, as China grew wealthier and more powerful. Beijing’s reluctance to inform the Chinese public of Japan’s role in facilitating China’s economic growth was also a source of consternation in Japan.

According to the International Cooperation Bureau of Japan’s Ministry of Foreign Affairs and the Japan International Cooperation Agency, the largest component of Japan’s ODA to China came in the form of concessional yen loans. Totaling just under ¥3.32 trillion over 42 years, these yen-denominated loans were made at very low interest rates. Beijing has faithfully repaid these loans on time, along with the interest accrued, and is scheduled to make the last repayment in 2047. Tokyo also provided ¥157.6 billion of grant aid to Beijing and contributed approximately ¥185.8 billion worth of technical cooperation assistance, including the dispatch of Japanese-language teachers to China. Neither grant aid nor technical cooperation assistance need to be repaid. The total for all three ODA modalities comes to ¥3.66 trillion over 42 years.

Japan’s ODA to China officially began in 1979. Following Beijing’s adoption of “reform and opening-up” policies in 1978, Chinese vice-premier Gu Mu visited Japan in September 1979 to request loans totaling $5.54 billion for eight projects. The following December, Prime Minister Ōhira Masayoshi visited Beijing to signal Japan’s readiness to begin the loan program, in the process declaring that “the emergence of a more prosperous China is a path to a better world.” Japan had just become the first country aligned with the West in the Cold War to provide ODA to China. 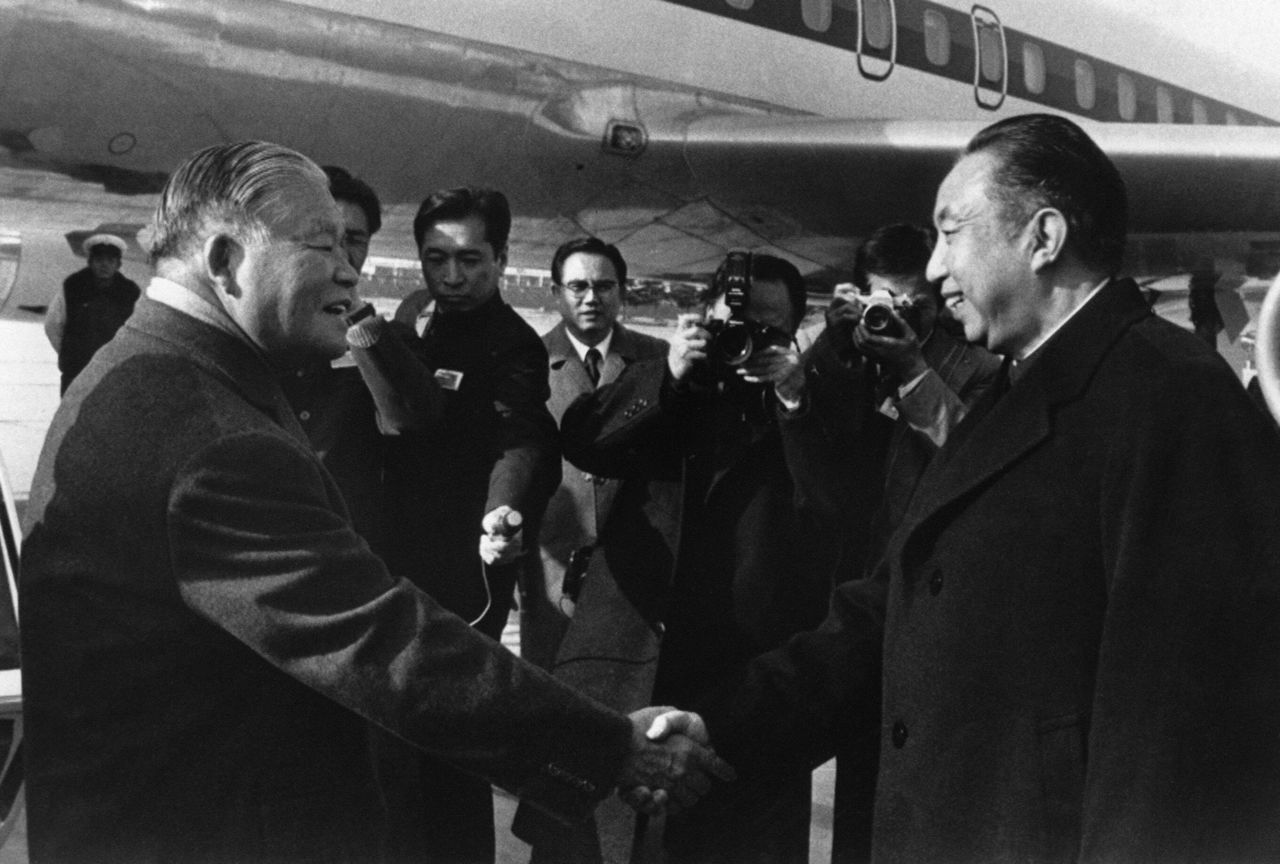 It is generally understood that Tokyo’s decision to provide ODA to China was a quid pro quo for Beijing abandoning World War II reparation claims. Morita Kōichi, vice president of the Japan-China Health Industry Promotion Association, recounts a discussion between his father, former transport minister Morita Hajime, and his grandfather—Prime Minister Ōhira—at the time of the prime minister’s visit to China. Ōhira reportedly told his son-in-law Hajime that “Japan’s ODA to China is to atone for the war. Japan provides economic assistance in exchange for China abandoning its pursuit of war reparations. One day, China will surpass Japan and become an economic superpower, making diplomacy between Japan and China considerably more difficult. Japan must prepare for this eventuality, and this is why we need to provide this assistance now.”

Tokyo clearly understood ODA in a multifaceted way. Not only was it a tool to support the development of other countries, it also served as de facto war reparations and, in the case of China, would support Beijing’s “reform and opening-up” policies. Tokyo hoped that it would, in turn, facilitate stability in Asia and globally.

Ōhira’s prediction that China would overtake Japan economically was proven correct in 2010, when China surpassed Japan in total GDP. China was also providing development assistance of its own to countries in Africa and elsewhere to further its strategic interests. China had also enhanced its military prowess, becoming a global superpower in the process. Tokyo decided to terminate its grant aid to China in 2006 on the grounds that China had ceased to be a developing country and the aid had achieved its objectives. This was followed by the end of concessional yen loans, mostly for infrastructure projects, in 2007.

Nevertheless, technical cooperation assistance to China continued in areas requiring collaboration between both China and Japan. Projects focused on cross-border pollution, infectious diseases, and food safety sat alongside projects to calibrate regulations that would facilitate the smooth operation of Japanese companies entering the Chinese market.

The content of Tokyo’s ODA for China changed over time. In the early 1980s, yen loans were made primarily for large-scale infrastructure projects like railroads, airports, ports, power plants, and hospitals. These projects were central to Beijing’s modernization ambitions as it implemented its reform and opening-up policies. In the 1990s, Japanese ODA expanded to focus on subway construction, poverty alleviation in rural inland areas, and environmental damage mitigation measures. This assistance helped pave the way for China’s explosive economic growth and its emergence as the world’s second largest economy.

One notable example is the China-Japan Friendship Hospital in Beijing. Tokyo provided Beijing with approximately ¥16.5 billion from 1981 to 1983 to furnish the hospital with the latest medical equipment. From 1981 to 1995, Tokyo facilitated the transfer of Japanese medical knowledge and approaches to medical care to Chinese doctors, nurses, and clinical technicians to aid in the creation of a modern general hospital. When the severe acute respiratory syndrome outbreak occurred in 2003, this was the hospital the Chinese authorities designated to receive severely ill patients; the hospital was officially approved by Beijing for the 2008 Olympics, cementing its status as one of China’s leading general hospitals. 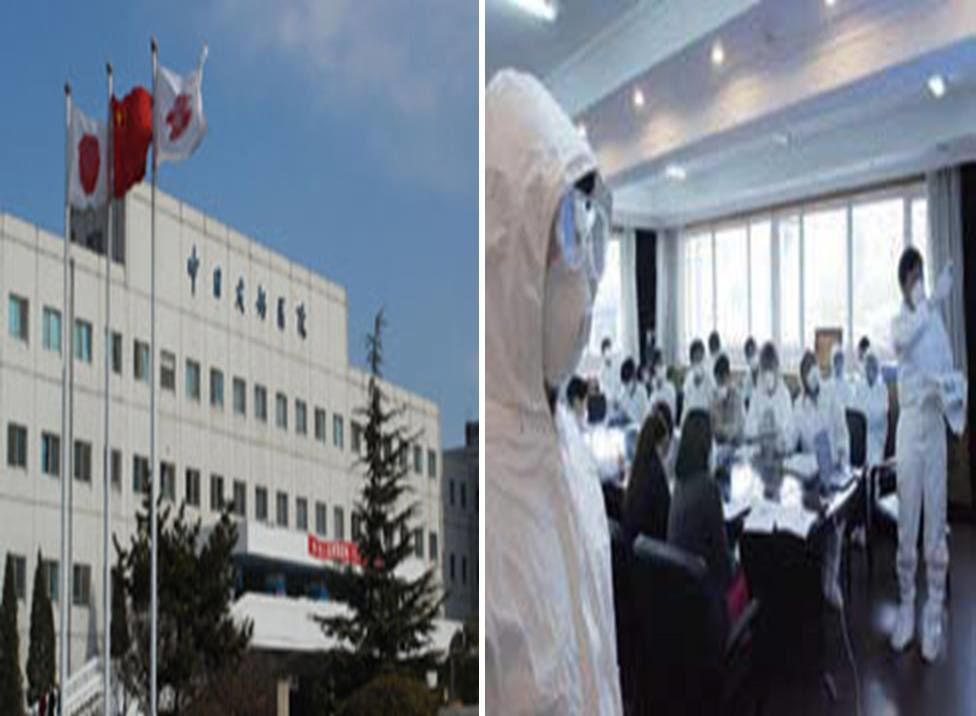 Beijing’s China-Japan Friendship Hospital was completed in 1984. By introducing Japanese-style medical services, it became one of China’s leading general hospitals. On the right, Japanese medical experts instruct staff from the intensive care unit on how to use protective clothing during the 2003 SARS outbreak, which originated in Guangdong Province. (Images courtesy of JICA)

The 1990s brought a new development challenge in the form of the construction of Beijing Capital International Airport, known by its airport code PEK. Tokyo extended a total of ¥30 billion in loans to China between 1993 and 1996 to build new passenger and cargo terminal buildings for international and domestic flights. Annual passenger traffic increased quickly from 3 million to 36 million within a decade, transforming PEK into one of the world’s leading international airports. 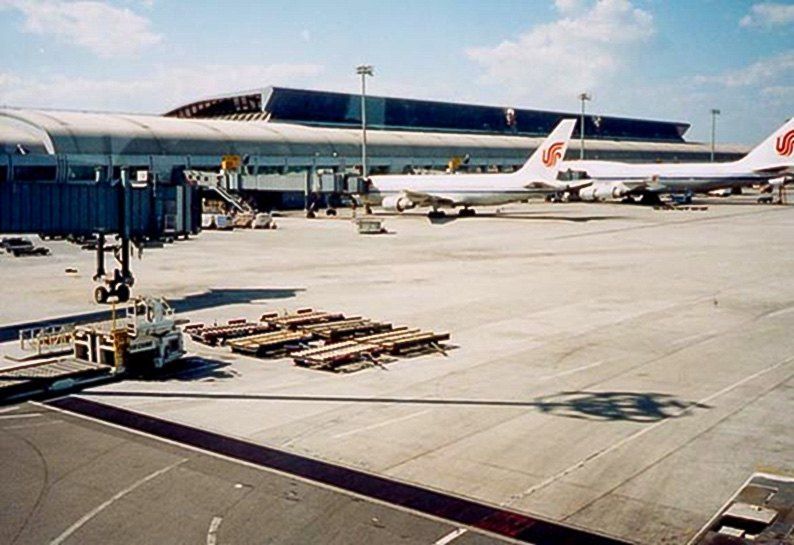 Beijing Capital International Airport became a gateway to the sky after its construction in the 1990s. (Image courtesy of JICA)

Japan’s ODA also contributed to the elimination of polio in China. At one point, China accounted for 85% of all polio cases in the Western Pacific, the WHO region that includes Japan, China, the Philippines, and 34 other Asian and Pacific nations. In severe cases, polio can cause acute meningitis and childhood paralysis. In 1990, Japan began providing technical cooperation assistance, and in 1993 it provided ¥700 million in grants and other assistance to China for fighting polio. Polio has now been eliminated from China and, indeed, from the entire Western Pacific region.

In the 2000s, Japanese technology helped support social development in China’s inland areas. One example includes the construction of a monorail for public transportation in the mountainous and rugged city of Chongqing. First proposed in 1993, Hitachi completed the 13.5-kilometer monorail in 2001 with the help of a ¥27.11 billion loan from Tokyo. The monorail significantly improved Chongqing’s traffic congestion and air pollution. 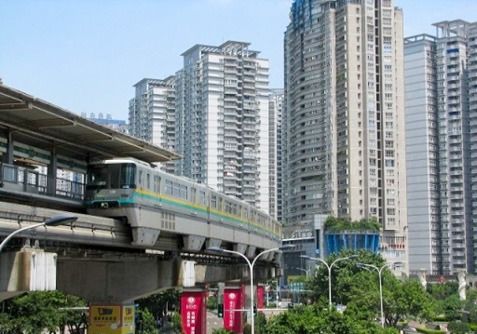 The monorail in central Chongqing was completed in 2001 with Japanese technology and financing. (Image courtesy of JICA) 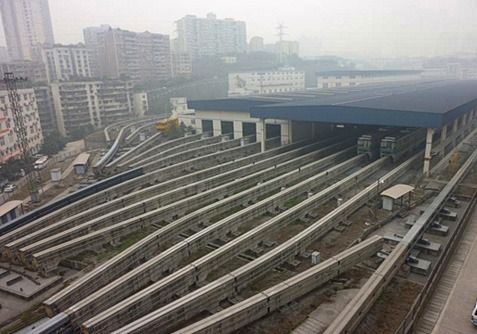 The problem of air pollution caused by PM2.5, particulate matter 2.5 micrometers and smaller, was the focus of one recent collaborative technical cooperation ODA project between China and Japan. Known to spread far from the original source and across borders, tiny PM2.5 particles in the air reduce visibility and cause health problems. In 2012–16, Tokyo provided the platform for Japanese companies to share knowledge with three Chinese steel companies that were major sources of PM2.5 emissions. Together, the Chinese and Japanese companies realized improved methods for controlling the amount of nitrogen oxides in the air using Japanese measuring instruments.

From 1986 through 2015, Tokyo also dispatched approximately 830 volunteers to all 32 provinces in China as part of technical cooperation ODA projects in the medical, healthcare, and agriculture domains. Tokyo wanted to simultaneously promote grassroots technology cooperation and enhance mutual understanding.

However, the Chinese government has been reluctant to disseminate information about the role of Japanese ODA in the construction of various prominent facilities, limiting mutual understanding. The Japanese government approached Beijing about this problem, but with mixed results. For example, PEK displayed a nameplate with a single line indicating that the airport was constructed with a large loan from Japan. However, for the most part, there are still scant indicators elsewhere of Japan’s assistance in China, resulting in few Chinese citizens being aware of Japan’s contributions. This is likely due in part to the Chinese government viewing Japan’s assistance as a matter of course, given that Tokyo itself originally viewed the ODA as a substitute for war reparations. 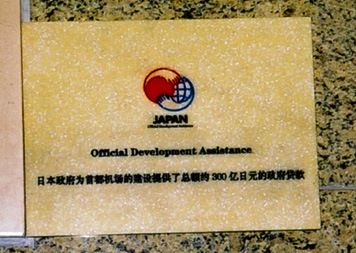 Nevertheless, this lack of acknowledgement, together with Beijing beginning to provide strategic assistance to other developing countries while it still received ODA from Tokyo, increasingly created dissatisfaction in Japan. Questions were asked whether true friendship between Japan and China could really flourish if Chinese citizens were not being made aware of the centrally important role of Japan’s ODA for China’s modernization and the success of Beijing’s reform and opening-up policies.

It was Prime Minister Abe Shinzō who eventually put an end to the lingering questions about Japan’s China ODA during an official state visit to China in October 2018. A little over 40 years since the signing of the Sino-Japanese Treaty of Peace and Friendship, Abe declared that “China has now developed into the world’s second largest economy, meaning Japan’s ODA has completed its historical mission.” Japan’s ODA program to China came to a complete end in March 2022 as the technical cooperation assistance programs announced in the 2018 fiscal year ran their course.

At the same time, Abe expressed his willingness to stabilize Japan-China relations during the visit. The former prime minister proposed a new “development cooperation dialogue” between China and Japan in place of ODA provision that would reflect a Sino-Japanese partnership approached from “a broad perspective . . . appropriate for a new era.” Abe envisioned China and Japan cooperating in so-called “third countries” where both countries were already individually extending and expanding development assistance.

A senior MOFA official, however, noted that Tokyo’s position was to avoid explicit cooperation within the BRI framework while remaining open to cooperation on specific projects. After all, the BRI and Japan’s own “Free and Open Indo-Pacific” vision are in many ways in strategic tension with each other. Striking a balance between the cooperative and competitive aspects of Beijing’s and Tokyo’s strategic visions will be an ongoing challenge, and is why Tokyo did not officially commit to BRI participation.

Following Tokyo’s termination of new ODA to China, Prime Minister Abe expressed his desire to build a new development relationship where China and Japan would work side by side to enhance regional and global stability and prosperity through dialogue and personnel exchange. President Xi responded by expressing that he held Japan’s ODA in high regard and indicated that he was positively disposed toward a Sino-Japanese development cooperation partnership.

It is therefore fair to say that one of Abe’s diplomatic achievements was obtaining high praise from Xi and the Chinese leadership of Japan’s ODA. On the other hand, the specifics of Xi’s statement and what they mean for future development cooperation have yet to be clarified. Ultimately, unless the Chinese public is correctly informed about the extent and significance of Japan’s ODA contributions—functioning as they did as war reparations and in facilitating China’s economic development—friendship and goodwill between China and Japan for building a partnership “appropriate for a new era” will not be realized. For this reason, it is important to clarify and publicize the meaning and intention behind Xi’s words.

(Originally published in Japanese. Banner photo: A local official, at left, thanks Niwa Uichirō, then Japanese ambassador to China, in front of a facility built with Japanese ODA on June 24, 2011, in Artux, Xinjiang Uygur Autonomous Region, China. © Jiji.)