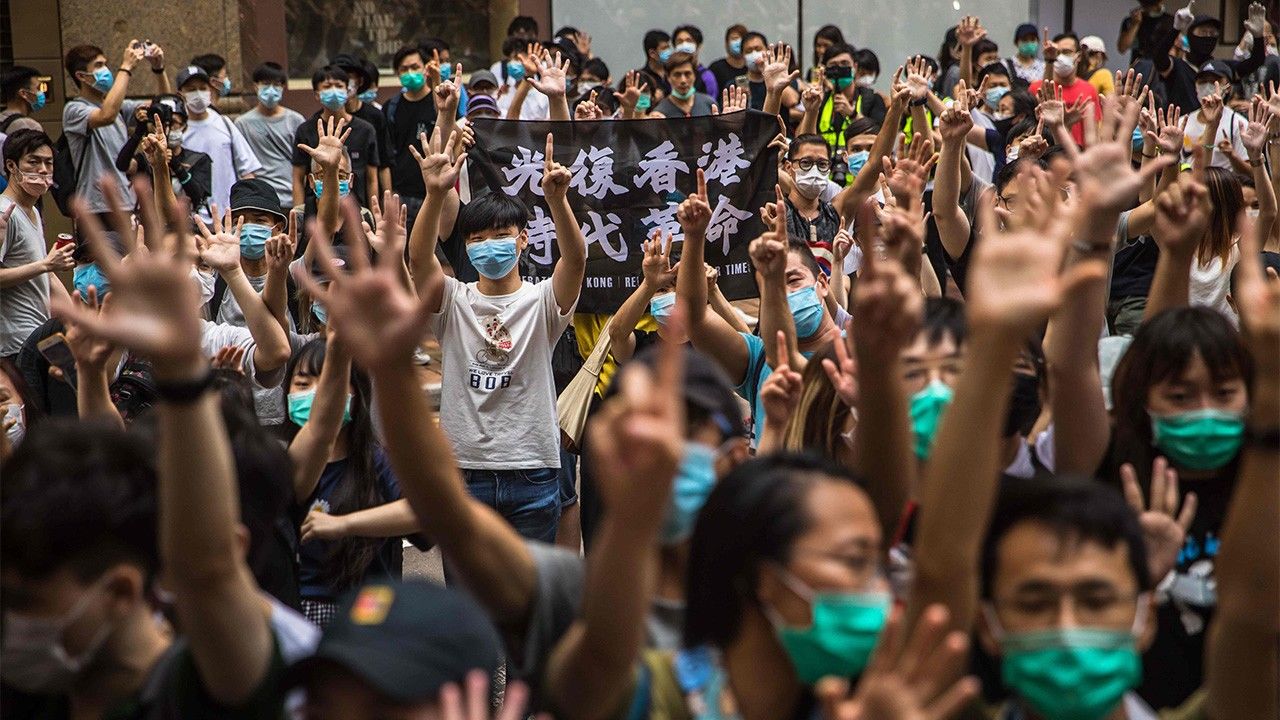 Hong Kong’s government does not keep detailed statistics on outward movement from the territory, but other data sources are already showing some unusual trends. First, Hong Kong’s overall population is decreasing. The 2019 year-end population of 7.52 million fell to 7.40 million as of the end of 2021. Given that Japan’s population is roughly 16 times that of Hong Kong’s, this would be equivalent to a drop of some 2 million people in Japan, or the whole population of the city of Sapporo. Hong Kong has experienced in two years the same population shrinkage rate as Japan has seen over the last 10.

The working population, in particular, has fallen dramatically. The 2019 workforce of 3.99 million fell to 3.87 million in 2021, a loss of 117,000 over two years, making it the largest drop since World War II. These numbers exceed even the worryingly massive brain drain from 1988 to 1990, as people left the country ahead of its 1997 handover to China. Those two years still only saw a drop of 15,000, though; this recent change is nearly eight times as great.

This fall in the working population offers an indication of this recent outflow’s nature. The pre-handover emigration saw people hedging against the possibility that Hong Kong would become unstable after handover. That meant that families would often send mothers and children abroad first, while the father stayed behind to keep working. These men became colloquially known as “astronauts” because of all their time flying between Hong Kong and wherever their families ended up. This time, however, it appears that whole families are leaving Hong Kong together. They are leaving with resolve, as workers quit their jobs and liquidate their assets.

China forced Hong Kong to adopt the new National Security Law for Hong Kong in 2020, which led to the arrest of large numbers of democracy supporters. Although the government claims that this was an act to preserve “national security”—meaning, of course, the security of the Communist regime—many Hong Kong residents view it as a loss of liberty, and are abandoning the territory for good.

The business leaders who shore up Hong Kong’s status as an international financial center, though, are reacting more to the country’s zero-COVID policy.

Many foreign companies use Hong Kong as their base for Asian business. Central Hong Kong is only an hour’s trip from the major Chinese manufacturing region of Shenzhen, and Hong Kong International Airport is a global hub connecting Asia to the rest of the world. In short, it is the perfect business center for access to China and and Southeast Asia.

However, even as other nations have opened up in response to widespread vaccination and a drop in severe infection rates during the prolonged pandemic, Xi Jinping’s powerful grip on Hong Kong means it is maintaining a Chinese-style zero-COVID policy. Although Shenzhen once set up a day-trip zone for easier transit on business trips, commutes, or student movement, visitors are now subject to extended periods of forced isolation in hotels each time they enter or leave the city. Flights are also restricted. As of April, only around 20 international flights landed at Hong Kong International Airport each day.

Naturally, diplomatic missions and business groups from various countries have asked China’s government to address the issues its strict approach to disease control is causing. However, with Xi Jinping himself insisting that temporary economic impacts are of less import than protecting human lives, the influence of foreign lobbies has been limited. Tara Joseph resigned as head of the American Chamber of Commerce in Hong Kong in November 2021 due to her failure to persuade the Hong Kong government to ease the restrictions.

The upshot is that numerous foreign companies and expatriates have left Hong Kong. In February 2022, the European Union’s Hong Kong office sent a letter to then Hong Kong Chief Executive Carrie Lam, warning that 10% of the EU citizens living in Hong Kong had already left. A US government report from March stated that the number of American citizens living in Hong Kong had dropped from around 85,000 in 2021 to around 70,000. Many of those who left were high-ranking business figures who had helped make the country an international financial center. Such people can easily cross borders and find work anywhere in the world.

Although some pundits have claimed that China can afford to lose Hong Kong’s international financial function as long as it has Shanghai and Shenzhen, the fact is that the latter cities’ benefits differ greatly from Hong Kong’s role of gathering foreign capital. In an American Chamber of Commerce in Hong Kong member survey conducted last fall, 80% of respondents named Singapore as the biggest threat to Hong Kong’s position, far more than Shanghai (10%) and Shenzhen (8%).

That report says that in the first quarter of this year, the number of members working in Hong Kong’s finance and insurance industry declined by 7,000 year-on-year, while the number in Singapore increased by 4,000. If Hong Kong is replaced by a country like Singapore, it will mark a net loss for China.

China is clearly aware of the danger. On July 1, President Xi spoke at a ceremony marking the twenty-fifth anniversary of Hong Kong’s handover to China. In it, he emphasized the importance of maintaining Hong Kong’s internationality. In addition to the liberal business environment and international network, Xi also remarked on the value of Hong Kong’s common law and independent judiciary, and declared that he would maintain both.

In other words, Xi Jinping, who has always been critical of Western democratic regimes and transformed Hong Kong’s political and social system with his imposition of the New National Security law, actually praised the Western-style economic system and even the legal structure left behind by the British. The likely reason for this was to encourage elites, including Hong Kong’s foreign residents, to stay.

In 1992, Deng Xiaoping toured various parts of Guangdong Province and delivered speeches encouraging accelerated reform and opening up, something called the Southern Tour. It was an attempt to break the economic stagnation that had arisen after international sanctions responding to the 1989 Tiananmen Square incident, and to spark economic reforms then held back by rising conservative factions inside China. Xi’s recent comments seem to be meant as a new Southern Tour speech, emphasizing economic freedom even after the recent political repression.

The problem is that, while the 1992 Southern Tour led to acclerated reform and liberalization, there is no indication that Xi will bring about such major policy shifts. In that same speech, Xi also praised the National Security Law and an electoral system revision excluding democratic factions as ensuring that the country’s government is “safely kept in the hands of those who love the country” and said that the new system will be in place for the long term.

An internal report at the European Chamber of Commerce in Hong Kong presumed that China will not open borders to the international community until it develops a domestically produced mRNA vaccine and inoculates 1.4 billion of its people, which could be late next year or even in 2024.

The Communist government, in trying to maintain and benefit from an international economy while preserving its hard-line political system, is still trying to make Hong Kong an ideal “one country, two systems” example, with Chinese-style politics and a global-style economy. However, with politics being the cause of the current economic woes, it may be difficult to maintain both national security and economic prosperity.