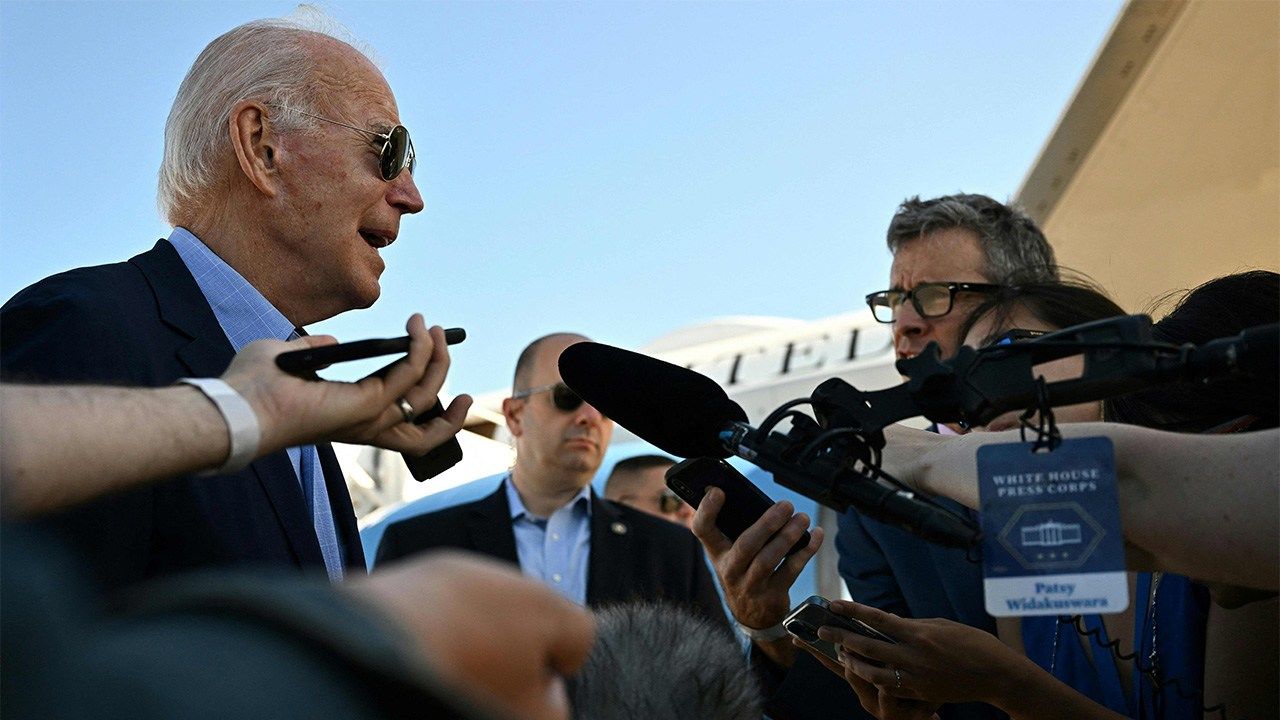 Politics Sep 16, 2022
In the wake of China’s massive military drills in the Taiwan Strait, the author warns of the unintended consequences and growing risks of President Joe Biden’s non-confrontational management of US-China relations.

China’s recent military exercises in the Taiwan Strait, sparked by US Speaker of the House Nancy Pelosi’s visit to Taiwan, have precipitated a security crisis in East Asia. Unprecedented in scale, they have not only revealed Chinese plans for a total air and naval blockade of the island but have also raised serious concerns that such maneuvers (depending on the US and Taiwanese response) may become the “new normal” in the Taiwan Strait and the surrounding region.

Pelosi has drawn both criticism and praise for undertaking the trip, but it is China that has unilaterally attempted to change the status quo with these latest exercises, repeatedly crossing the mutually (albeit tacitly) agreed “median line” between China and Taiwan and conducting live-fire drills in Taiwan’s territorial waters. This behavior in turn raises serious questions about US President Joseph Biden’s “management” of US-China competition.

No Need for Confrontation?

Under President Donald Trump, Washington embraced a hardline China policy, designating that country as a long-term strategic competitor of the United States and treating it accordingly. On the face of it, the Biden administration has continued that basic policy, including support for Japan’s Free and Open Indo-Pacific initiative. But in its day-to-day management of US-China ties, it has adopted a very different approach.

The Trump administration made it clear that it meant to compete with China using every means at its disposal, even at the risk of confrontation. On the economic front, it imposed massive unilateral tariffs. In the military sphere, it refused to rule out the possibility of a superpower showdown and substantially boosted the defense budget for the Indo-Pacific, including the revival of a previously scrapped nuclear-armed sea-launched cruise missile. The Biden administration has taken a far more cautious line. Extolling the virtues of competition without confrontation, it has gone out of its way to avoid any showdown with Beijing.

Heading up the management of US-China relations—including Taiwan affairs—is Kurt Campbell, currently National Security Council coordinator for the Indo-Pacific and formerly assistant secretary of state for East Asian and Pacific affairs under President Barack Obama. Campbell’s view of US-China relations is spelled out in a Foreign Affairs article published at the end of 2020, on the eve of Biden’s inauguration. In it, Campbell argues that “unlike the militarized and occasionally existential struggle with the Soviet Union, US-Chinese competition is primarily economic and technological,” and he insists that “competition with China need not require confrontation or a second cold war.”

The Risks of Conflict Avoidance

In fact, this change in course was articulated by Biden and his Democratic Party even earlier, in the 2020 party platform. As that document explains (pages 88–89), the party’s China policy is predicated on the belief that “the China challenge is not primarily a military one.” Contrasting their approach with Trump’s confrontational foreign policy, the Democrats pledge to stand up to China “without resorting to self-defeating, unilateral tariff wars or falling into the trap of a new cold war.” They call on the United States to “lead international efforts to push back on malign behavior while also pursuing cooperation on issues of mutual interest like climate change and nonproliferation and ensuring that the US-China rivalry does not put global stability at risk.” Biden’s clear preference for diplomatic solutions and conflict avoidance dovetails perfectly with Campbell’s worldview.

Of course, an all-out conflict is something to be avoided. A head-on clash between the United States and China could be catastrophic, utterly dwarfing the current war in Ukraine. The military, political, and economic costs would be huge, not only for Taiwan and Japan but also for Southeast Asia, India, and the Middle East. Ultimately, the entire world would doubtless feel the impact.

Certainly competition without conflict is the desired outcome. But forswearing a confrontational stance is not the way to achieve that result. If we want to deter China from the use or threat of force for its own hegemonic purposes, we must give it a good reason to back down by showing ourselves willing and able to respond decisively at key junctures, never ruling out confrontation. However, the Biden administration seems to view things otherwise. For example, it postponed a scheduled test of a Minuteman III intercontinental ballistic missile—already delayed once to avoid provoking Russia—for fear of escalating tensions with China while it was conducting military exercises aimed at Taiwan.

The no-confrontation style of competition management embraced by the Biden administration is far too flaccid to make anyone back off. Indeed, Beijing may already have seen through to the substance of Biden’s “competition control”—an unwillingness to match America’s strength against China’s. In this sense, conflict avoidance is actually the riskier policy, since it invites one’s adversary to keep pushing the boundaries of permissible conduct.

It seems to me that Biden’s non-confrontational approach reflects a personal bias already in evidence during the Obama administration, which was famous for rejecting (or deferring) any military response to international crises. Indeed, I would suggest that the pattern of behavior we are seeing vis-à-vis China was also apparent in the Obama administration’s treatment of Russia.

In March 2014, when Russia forcibly annexed Crimea (a part of Ukraine), Obama immediately ruled out a military solution, insisting that US military involvement of any sort was “not an option.” He overruled NATO allies who wanted to provide military aid to Ukraine. London reportedly proposed that the United States and its NATO partners at least conduct joint maneuvers in an effort to hold the Russian army in check, but Obama would not hear of it. At the time, Obama was criticized for this seeming allergy to any kind of military response, but it bears remembering that his top advisor on matters of foreign policy was then Vice-President Joe Biden.

Eight years later, Biden reacted very similarly to Russia’s invasion of Ukraine, asserting early on and repeatedly that the United States would not send troops or otherwise risk a direct clash with the Russian military. Critics have complained that the president could at least have slowed Russia’s advance by warning that Washington was keeping all options (military included) on the table. A deep distaste for military force may be a common thread running through the Obama and Biden administrations.

As leader of the free world, the United States must continue to confront China and Russia, two countries that rely on and respect brute force. Actions like Russia’s invasion of Ukraine and China’s live-fire drills around Taiwan demonstrate all too clearly that we cannot check Russian and Chinese aggression simply by appealing to reason. Perhaps this is why the Biden administration has come across as “soft” on America’s adversaries.

Much has been said of the Trump administration’s failings, but where management of the US-China relationship was concerned, it adopted a tough-minded approach, entering into direct negotiations after making clear, through words and deeds, that America would not back down from a confrontation. Tensions rose and remained high between Washington and Beijing, raising the specter of a “new cold war.” But that tension functioned as a restraint on China’s behavior. Mutual deterrence between two great powers can only function within such a climate, and that is precisely what is lacking in the current US-China relationship—or rather, the tension seems to be on the American side alone.

Compounding the problem are the mixed messages coming out of the White House. Biden has repeatedly made statements (slips of the tongue, we are told) that are at odds with Washington’s long-standing tradition of “strategic ambiguity” vis-à-vis the Taiwan problem—most notably, in his assertion that the United States had a commitment to defend Taiwan. On each occasion, other government figures stepped in quickly to clarify that the US position had not changed. In this way, Washington officials have rushed about needlessly, striving to avert misunderstandings and avoid friction, while allowing China’s provocative conduct to escalate. As foreign policy experts Bonnie Glaser and Zack Cooper put in a New York Times opinion piece published shortly before Pelosi arrived in Taiwan, “'strategic ambiguity’ has given way to strategic confusion.”

Lest anyone for a moment doubt the importance to Japan of US policy toward China and Taiwan, let us recall that missiles were fired into Japan’s exclusive economic zone during China’s recent large-scale exercises. Military experts have warned that the overall balance of power in the region has shifted further toward China since the Obama administration, and that shift is made manifest in China’s recent muscle flexing. Campbell and Biden are making a serious mistake if they are basing their policies on assumptions about China dating back to the Obama years. The risks of Washington’s non-confrontational competition-management policy are growing by the day, and Japan can no longer afford to ignore them.