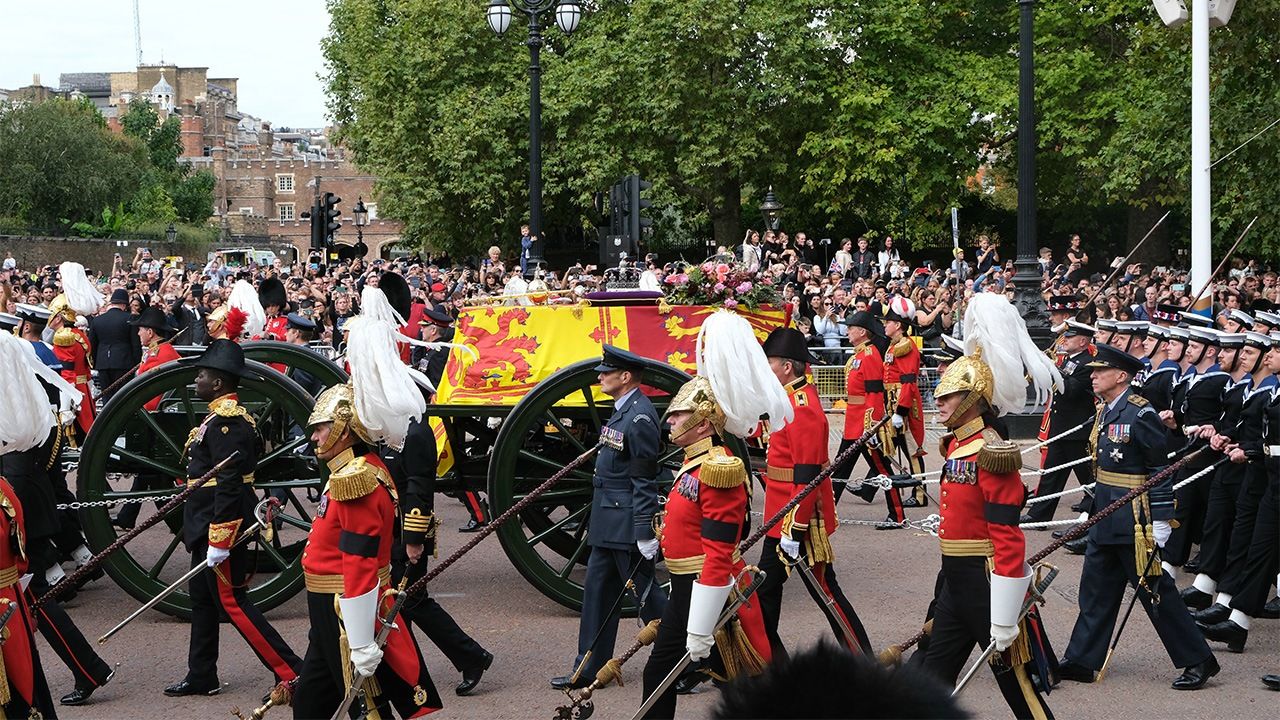 Politics Oct 27, 2022
Queen Elizabeth II’s state funeral was a splendid sending-off for a monarch who had spent seven decades on the throne, with dignitaries in attendance from all over the world. It called to mind the funeral of Japan’s Emperor Shōwa in 1989, and it is worth comparing the two ceremonies.

The state funeral for Queen Elizabeth II, held on September 19 this year, showed British tradition at its best. It was also an opportune time to reflect on the funeral staged for the late Emperor Hirohito (Shōwa posthumously), who passed away at age 87 in February 1989. His 62-year reign was the longest of any Japanese monarch since the Asuka period (593–710), when the first reliable records appeared. His years on the throne encompassed World War II, Japan’s defeat, and the nation’s rise to become the world’s second strongest economy. Even after his status was changed through promulgation of the postwar constitution, proclaiming the separation of religion and state, his funeral was straight out of an ancient scroll, with a splendor fitting for the traditions of the world’s oldest royal family.

Dignitaries from 164 countries attended Shōwa’s funeral, including US President George H. W. Bush, French President François Mitterrand, Indonesian President Suharto, monarchs from Belgium, Sweden, and Spain, and Queen Elizabeth II and her husband Prince Philip—a total of roughly 10,000 people. The ceremony attracted world attention as a state funeral on unprecedented scale in modern times, and was reported widely by the international media and even broadcast live in the United States. National governments around the globe expressed their condolences to Japan.

I reported on the event on the ground at the time, but 33 years later, I noticed both similarities and significant differences as I watched Queen Elizabeth’s funeral on television.

The Queen Lies in State

The coffin of Elizabeth II was displayed in public in Edinburgh and London. I was astonished to see King Charles III, Prince William, and other royals attending in view of the general public, who had also come to bid farewell to their queen. In 1989, by comparison, the emperor’s coffin was not put on public display in Japan. I sensed more proximity between the British monarch and her subjects.

In Japan, two weeks after his passing, a portrait of Emperor Shōwa was displayed in a building in the eastern garden of the imperial palace where mourners could pay their respects. His coffin lay in the State Chamber, some distance from the eastern garden and out of direct view. Some 340,000 people visited during the three days of official public mourning.

Elizabeth II’s coffin rode in a car, receiving applause as it passed the crowds, many of whom threw flowers. This seemed to be a normal manner to behave for those who adored their late queen. But would it be possible in Japan? Many people would feel uncomfortable applauding at an imperial funeral. It is also doubtful whether security would allow people to throw flowers. Such things are indicative of differences in the national character.

A Majestic Procession Through Central London

The state funeral for Queen Elizabeth II was held at Westminster Abbey, which has a close association with the British royal family. The church is designated as world heritage. While her funeral was conducted indoors, the Shōwa Emperor’s funeral was staged outside, at Shinjuku Gyoen National Garden in Tokyo. When watching the footage at Westminster Abbey, I felt I understood the reason.

Queen Elizabeth II’s coffin was carried in by eight guards. In contrast, the palanquin holding Emperor Shōwa’s coffin was enormous, weighing 1.5 tons, and was carried by 51 imperial guards—there was no indoor facility large enough to accommodate this. This is why a venue was erected in Shinjuku Gyoen, similar to that built for his father, Emperor Taishō. 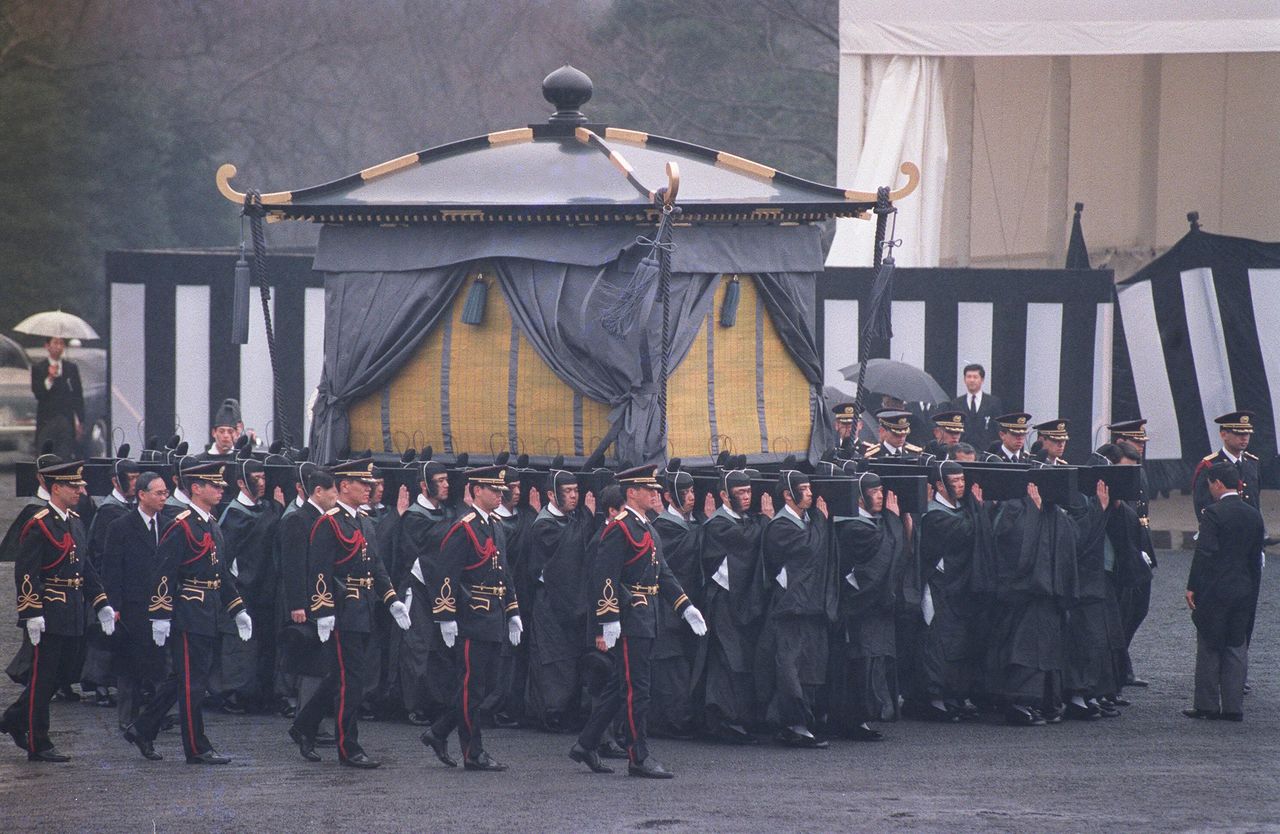 There were also differences in the colors used at the two funerals. The Japanese funeral could have been shot in black and white, whereas the queen’s funeral was a far more colorful affair, with the red-clothed guards and the yellow royal flag draped over her coffin.

The highlight of the British royal funeral was the 2.4-kilometer, 4,000-strong funeral procession that passed through the capital following the ceremony. In keeping with British royal tradition, the queen’s coffin was placed on a naval carriage that passed by the crowd, accompanied by King Charles III and other members of the royal family.

Over 10,000 police officers were mobilized nationwide during the event, said to be the largest such mobilization ever. The naval carriage was drawn by rope by 142 naval officers, simultaneously providing natural military protection for the members of the royal family as they passed through the city streets.

A Worldwide Sharing of Japanese Tradition

The highlight of Emperor Shōwa’s funeral was also the preceding procession. Officials in ancient costume led the procession, accompanied by melancholy music played by musicians of the Imperial Household Agency, as the royal palanquin arrived. They were followed by members of the imperial family. Despite the falling sleet, the procession of 225 presented a very Japanese appearance to audiences at home and all around the world.

Following the ceremony at Shinjuku Gyoen, another large procession took place for the burial at the Musashi Imperial Mausoleum, in the western Tokyo city of Hachiōji. But both were staged with a limited number of participants. Around 600,000 people lined the streets to pay their respects, but they were unable to view the procession on the mausoleum grounds with their own eyes.

This created a stark contrast with the solemn procession that took place in London, watched by crowds of citizens. Tokyo has witnessed many motorcades, but it is hard to imagine the emperor or his family taking a long walk through the streets of the capital.

The funeral schedules also differed between the two countries. The state funeral for Elizabeth II was 11 days after her death, while that of Shōwa took place 48 days after his passing. In the case of the mausoleum, an opening had to be cut into the mountain, and the construction work required six weeks. Japan used this time to prepare one of the largest state funerals the world had seen.

Britain managed to invite heads of state and other dignitaries from around the world and organize a secure event in record time. The funeral plan was code named Operation London Bridge, and it was evident that the project was carefully planned in secret.

One thing in common was the strength shown by the newly enthroned Emperor Akihito despite the sadness of losing his father, and King Charles III, who had just lost his mother. Both of these figures had endured great heartache but still addressed their people, as they swore their loyalty and intention to serve.

In Japan, this experience partly informed Akihito’s decision to abdicate. Twenty-seven years after ascending the throne, in abdicating, the emperor expressed concern at the pressure that would be placed upon family members and other by the ceremonial requirements of a funeral combined with inauguration of a new imperial era.

Although Queen Elizabeth II is no longer with us, her reign continues to raise questions about imperial succession in Japan. In view of her illustrious achievements, why is it not possible for Japan to have a female monarch? In Japanese terms, King Charles III is a matrilineal king, but it presents no problems. There will no doubt be more calls for Japan to permit Princess Aiko, the only child of the reigning Emperor Naruhito, to ascend the throne.