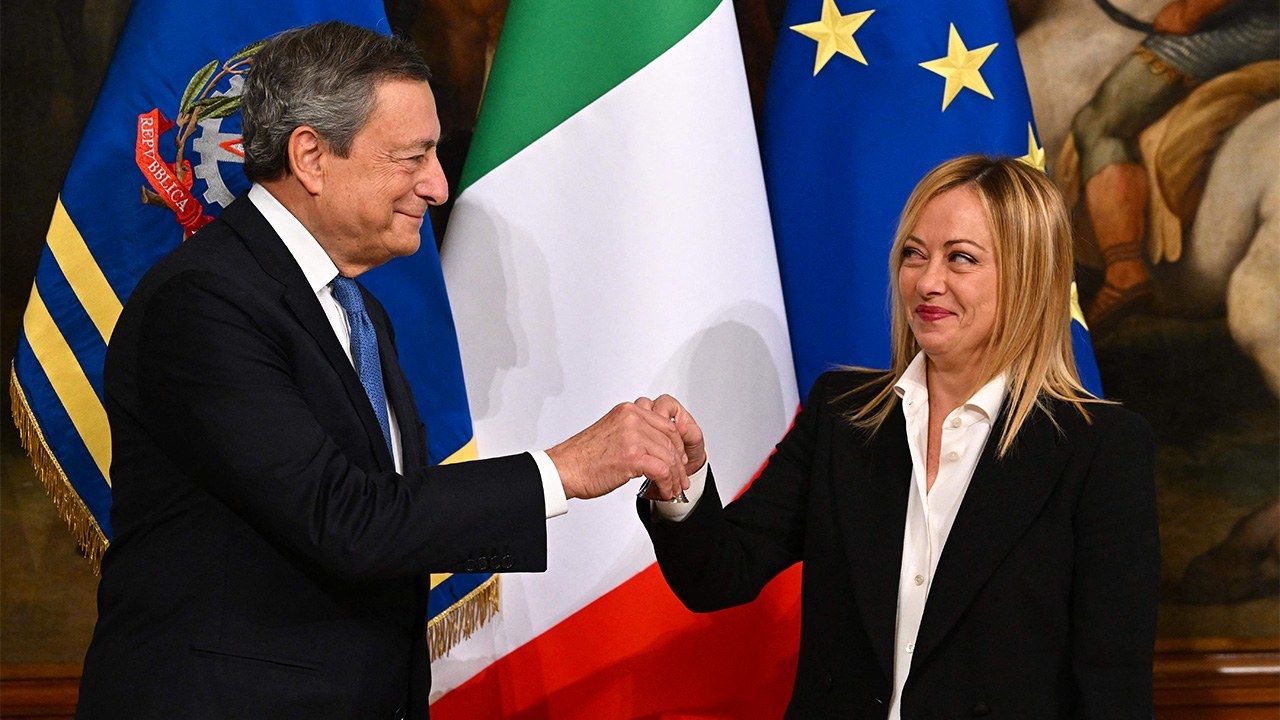 Politics Dec 19, 2022
Recent European elections have thrown up some surprises, such as the leader of a far-right party elected prime minister in Italy and a right-wing coalition forming the new government in Sweden. Some suggest these outcomes have been influenced by the war in Ukraine and high inflation, but political scientist Nakai Ryo argues that such concerns have not discernibly affected voting behavior.

Electoral Outcomes through the Lens of Party Seat Fluctuations

Several important elections resulting in significant change took place in European Union countries during the second half of 2022. Going by media reports, Russia’s ongoing invasion of Ukraine and the resulting spike in energy and food prices were responsible for this volatility. While rising cost seems like a commonsense explanation for these changes, initial evidence does not support the idea that war and inflation drove opposition to incumbent governments. Ultimately, country-specific drivers and longer-term structural trends in electoral politics account for the electoral outcomes in late 2022.

Coverage of these elections has focused on new governments in Sweden and Italy and big fluctuations in party seat numbers. It is important, however, to evaluate how unusual such changes are in the context of the results from previous elections.

Looking at the electoral volatility in terms of seat distribution, the Czech Republic, Latvia, and Denmark showed higher values in their most recently completed elections compared to the previous election. Sweden, Italy, and Bulgaria, however, showed less variation than in the previous election (Figure 1). 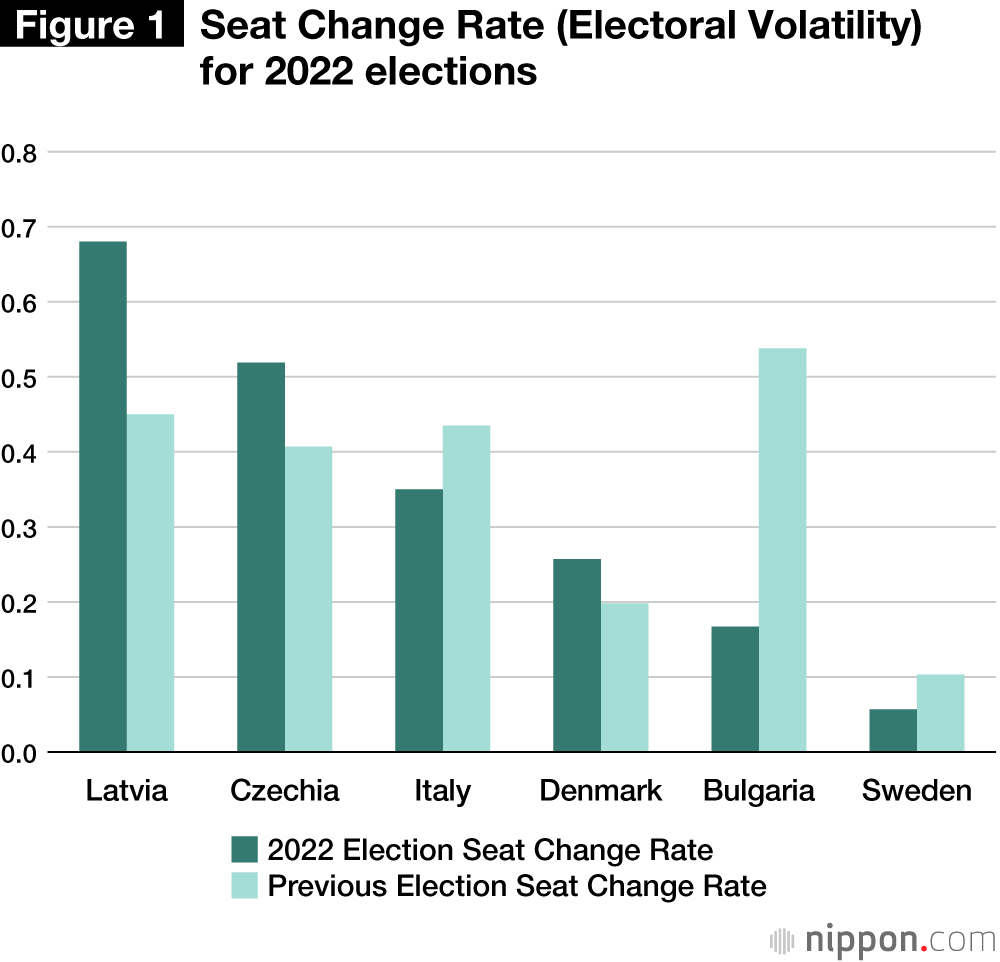 Although Sweden experienced a change from a center-left to a center-right government, the change in seat allocation was only about 5%—smaller than the change in the previous election. Electoral outcomes in both elections were decided by relatively tight margins, and public support for the parties did not discernibly fluctuate all that much. While the coalition maneuvering of parties played an important role in the political outcome, there is no evidence for any underlying change or volatility in Swedish public opinion.

In Italy, there was approximately a 35% change in party seat distributions. Together with the much reported on triumph of the right-wing Brothers of Italy party—whose leader Giorgia Meloni became prime minister—this number could indicate a major change in Italian public opinion. However, the previous election saw an even higher level of electoral volatility and 2022’s volatility is also comparatively small in historical context for Italian elections. It would therefore be short-sighted to attribute the political outcome to recent inflation and a major shift in Italian public sentiment. Rather, as James L. Newell notes in “Italy’s general election was no electoral revolution,” long-standing anti-EU sentiment and political mistrust is a much stronger explanation for ongoing volatility in Italy’s elections.

In Bulgaria, the previous election also saw a much higher degree of volatility. Bulgarian party politics had been plunged into extreme disarray in 2021 prior to the invasion of Ukraine, resulting in a series of re-elections following failures to form functioning governments. The reason for this chaos stemmed from mafia-related corruption problems of then Prime Minister Boyko Borissov. However, in 2022, Borissov stepped down prior to the election, seemingly reducing the degree of electoral volatility.

Denmark’s November general election did result in a higher degree of electoral volatility than the previous vote, as two new parties won seats. While the hardship caused by inflation cannot be excluded as a cause of this volatility, it is important to note that Prime Minister Mette Frederiksen was forced to call the early election over a different issue—the controversial and possibly illegal decision from November 2020 to cull millions of mink as a precautionary COVID-19 countermeasure. However, Frederiksen’s Social Democrats ultimately increased their seat total in the election, giving the ruling party a mandate to remain in power.

In the Czech Republic, a third of Senate seats were contested. Large demonstrations over the Ukraine war and inflation in the first half of September preceded this election. While the seat change percentage was 50%, higher than the previous election, the fluctuation was due to the ruling Civic Democratic Party dramatically increasing its share of seats. This suggests misalignment between the protests and underlying public sentiment.

Latvia merits a closer look, as the degree of fluctuation in seat distributions stood out above the other countries analyzed. At 70%, it was also considerably higher than in Latvia’s previous general election. Latvia’s inflation rate in the month before the election was also 22%, much higher than other European countries. Furthermore, the Ukraine conflict was particularly salient in Latvia as the country has long-standing diplomatic tensions with Russia, has a large Russian-speaking minority population in the country, and has provided significant financial aid to Ukraine since the start of the war.

With these issues in the background, the top four political parties all lost seats. On its own, this would suggest an unprecedented upheaval. However, the previously second, third, and fourth largest parties were populist left and right-wing parties that had won seats for the first time in the previous election. This electoral outcome therefore does not necessarily imply that populism gets stronger in Latvia’s politics.

The Harmony Party was the largest party in parliament after Latvia’s previous election. Supported by Latvia’s Russian-speaking minority, Harmony lost all its seats in the 2022 election, in a major shock to regional observers. However, the party’s decline in support had begun in 2019, when party leader Nils Ušakovs was suspended from his mayoral post amidst corruption allegations. This suggests that the party’s position on the Ukraine war was not the direct cause of its poor performance. In the end, it was Unity, a center-right liberal-conservative political party, that benefited the most from the deterioration in support of the four largest parties, as it increased its seat total more than threefold. The leader of the party, Krišjānis Kariņš, who has been Latvia’s prime minister since 2019, ultimately strengthened his hand within the ruling coalition because of the election.

In other words, although Denmark, the Czech Republic, and Latvia experienced greater electoral volatility than in the past, this volatility was in fact due to the return of support to an established party currently in power. Rather than a populist surge, the election outcomes in the three countries served to consolidate the political position of their respective governments.

Lack of Evidence for Inflation’s Impact

The above outcomes should not be surprising. The political science literature has not uncovered a direct and consistent connection between inflation and electoral performance. The classical view based on retrospective voting (or economic voting) theory is that worsening economic conditions generally work against the ruling party and incumbents. However, retrospective economic evaluations only affect incumbent electoral performance in limited conditions. (See, for instance, G. Bingham Powell Jr. and Guy D. Whitten, “A Cross-National Analysis of Economic Voting: Taking Account of the Political Context,” in American Journal of Political Science 37[2], 1993.) In particular, the connection of inflation with performance is ambivalent: Inflation in some cases is indeed perceived negatively when high prices impact the lives of voters, but inflation associated with economic growth is viewed positively.

Regarding the clarity of responsibility, when multiparty governing coalitions are formed, as is common in Europe, it is not clear to voters who is to blame for adverse economic circumstances. Furthermore, some voters in 2022 may have concluded that their own government was not directly responsible for inflation and instead connected it to Russia’s invasion of Ukraine.

A systematic review of past electoral outcomes to detect inflationary effects may therefore be useful. Although the high degree of inflation currently being reported is due to soaring energy and food prices related to the Ukraine conflict, as noted above, inflation was already discernible from 2021. Therefore, some countries have conducted elections in the current high inflation environment, some have held their general elections just before inflation began rising, and others held their most recent general elections at an intermediate stage between these two points.

To investigate this issue further, I looked at the correlation between inflation and the ruling party’s vote percentage and change in that percentage in EU 27 countries and member countries of the European Free Trade Association for the most recent parliamentary elections. (I excluded Liechtenstein from the analysis due to a lack of data.) 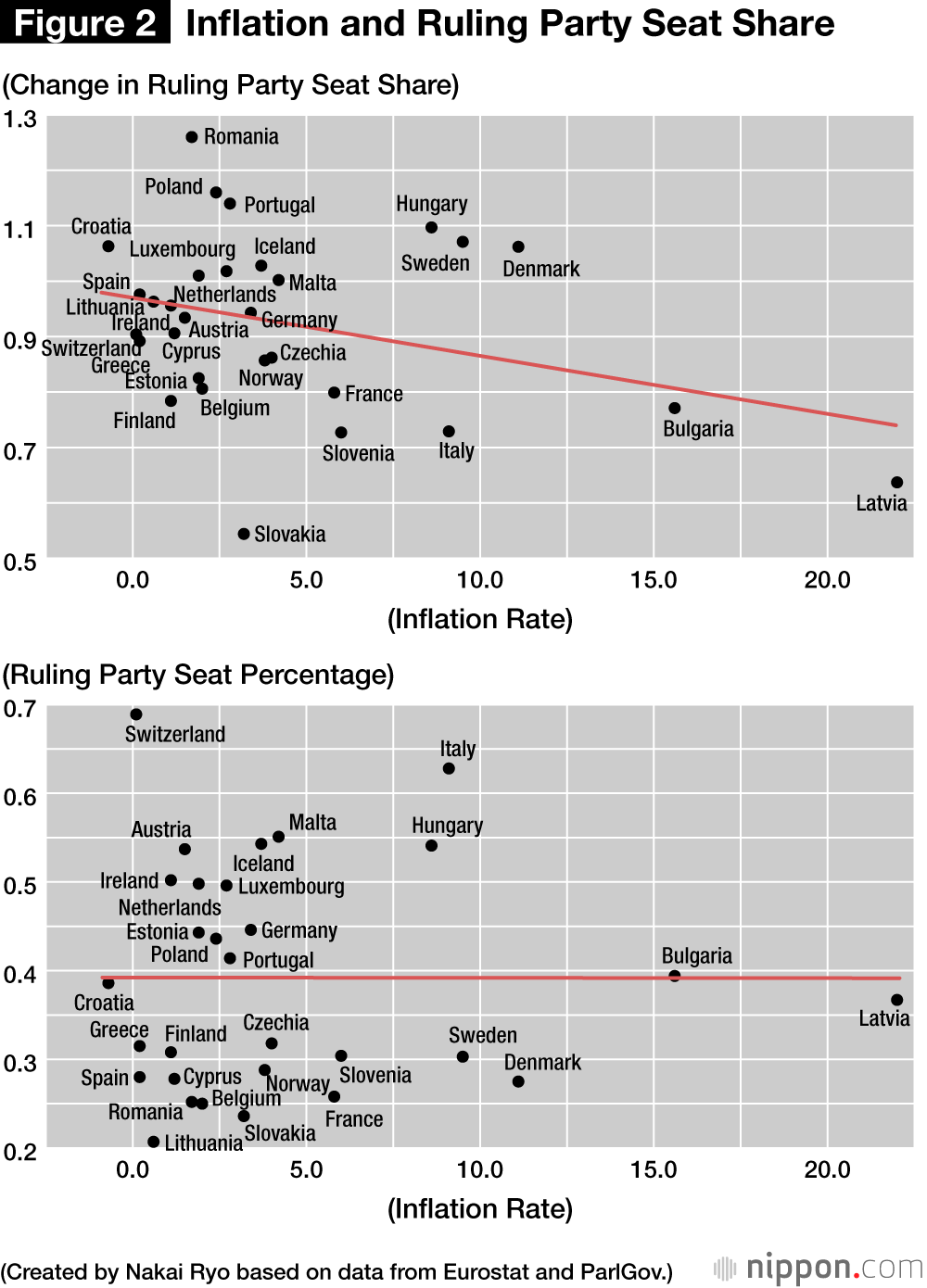 Figure 2 shows that there is no systematic relationship between the two variables. There is no discernible inflation effect on the percentage of votes received by the ruling party or the degree of change in seat shares. While the trend line showing the rate of change in seat shares skews slightly to the negative, this is due only to the high inflation data for Latvia and Bulgaria, and there is no statistically significant relationship.

Therefore, the seat share of incumbent ruling parties has varied both in countries that experienced high inflation and in countries that held their elections when inflation was low. High inflation has not necessarily worked to the disadvantage of the party in power, and in recent years inflationary pressures have not systematically affected European electoral outcomes.

There is no clear evidence that high inflation across Europe, even after the Russian invasion of Ukraine, has made popular sentiment volatile or destabilized election results. The ultimate conclusion is a clichéd one: Each country’s election results are determined by its own unique political dynamics and circumstances.

While a trite conclusion, voters do engage in the electoral process based on their individual circumstances, opinions, and views, and their choices are seldom governed by any particular political paradigm. Some voters may have considered the war in Ukraine. Some voters may have been concerned about inflation. There were probably also voters who cared about a myriad of other issues.

If European politics as a whole appears to be in turmoil, there is also a need to view it as a longer-term manifestation of structural changes, including changing attitudes towards party identification and ideological paradigms. Evaluating election results solely through the lens of the most recent major political events lends itself to black-and-white judgements that potentially miss both the smaller factors that influence voters’ decisions as well as the larger structural changes in electoral politics we are witnessing.

(Originally published in Japanese. Banner photo: Italy’s new Prime Minister Giorgia Meloni is handed a “bell” for use in cabinet meetings during the handover ceremony with outgoing Prime Minister Mario Draghi, at left, in Rome on October 23, 2022. © AFP/Jiji.)