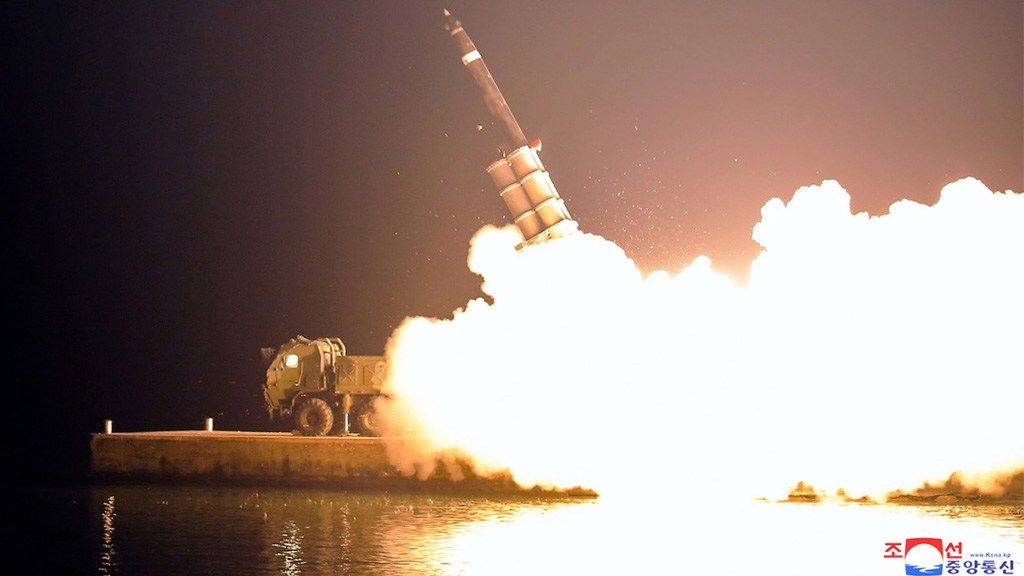 Politics Jan 25, 2023
North Korea fired an unprecedented number of missiles in 2022. A specialist catalogs the country’s increasingly diversified development and testing of missiles against the background of an ambitious five-year defense plan adopted in 2021.

As of the end of November 2022, North Korea had already fired more than 80 ballistic and cruise missiles, more than in any other year on record. Although the number of launches is disturbing, it is consistent with North Korea’s ongoing policy of continuously ramping up missile development and production, both quantitatively and qualitatively. Moreover, with the country’s borders closed and trade virtually at a standstill since the COVID-19 crisis hit in early 2020, North Korea appears to have relied on internal resources, including its accumulated technological know-how, to develop and produce its latest missiles. (North Korea has a wealth of mineral resources and appears to be making the most of them for this purpose).

Tests and Drills, Announced and Unannounced

There are two basic purposes to North Korea’s missile launches: military drills and the testing of new weapons. Military drills (which may also involve new weapons) are conducted by the army and are seldom announced, even within North Korea. However, tests of new missile systems, carried out by the Academy of National Defense Science (in charge of weapons development), are frequently publicized in order to tout the achievements of the academy’s development teams.

Over the years, the UN Security Council has responded to North Korea’s ballistic missile development with a series of sanctions resolutions, and any reported violation of these resolutions typically elicits a strong international reaction. Yet two short-range missile tests announced in North Korea caused little stir in either the United States or South Korea. One was the test of an “ultramodern tactical weapon,” reported by the North Korean media on November 16, 2018, and the other was the test launch of a “new-type tactical guided weapon,” announced on April 17, 2019. Subsequently, the South Korean military confirmed the firing of short-range missiles in a North Korean training exercise on May 4, and North Korea released a photograph—also identified as tactical guided weapons—that appeared to be a ballistic missile. Nonetheless, US and South Korean officials downplayed the launches, saying that they did not involve a ballistic missile and were thus not covered by the numerous Security Council sanctions resolutions condemning North Korea’s missile program. At the time, Washington and Seoul were doubtless anxious to head off any reaction that might derail bilateral talks between US President Donald Trump and North Korean leader Kim Jong-un. (Missile launches picked up sharply following the breakdown of talks.)

Even when military drills involve new weapons, they are often unannounced, though they may be reported after the fact. This appears to have been the case in 2022, when most of the launches were military drills. Reporting was sparse until October 10 (Party Foundation Day), when North Korea issued a statement on its missile activity in recent months, accompanied by photographs. Like a number of previous such statements, it anticipated that year’s US-South Korean military exercises and was doubtless intended as a deterrent or warning.

In January 2021, as part of North Korea’s five-year economic plan, the Eighth Congress of the Workers’ Party of Korea adopted the five-year plan for the development of defence science and weapon systems, which covered both future projects and systems already under development. It was the first time in history that Pyongyang had publicly included arms in its economic plan, strong evidence of the high priority it was placing on weapons development. Parts of the defense plan were made public.

Among the items disclosed were a “missile to strike and annihilate any strategic targets within a range of 15,000 kilometres,” a “hypersonic gliding flight warheads,” an “solid-fuel engine-propelled inter-continental underwater and ground ballistic missile” (ICBM: Inter-Continental Ballistic Missile), and a “underwater-launch nuclear strategic weapon” (SLBM: Submarine-Launched Ballistic Missile). No specific targets for the development of cruise missiles were mentioned. However, the released list is clearly not exhaustive, and actual test launches testify to the existence of other development programs. In the following, we will attempt to track the development of such systems, the aim of which is to equip North Korea to fight a war against the “imperialist” powers of the West, particularly the United States, South Korea, and Japan.

The missiles launched by North Korea during 2022 can be broadly divided into ballistic and cruise missiles, with most falling into the former category. Two missiles test-fired on October 12 were identified as long-range strategic cruise missiles, but neither the series name nor the model number was made public.

North Korea follows its own missile classification system, with cruise missiles classified as either “intermediate range,” “long range,” or “long range strategic.” Ballistic missiles are also classified by range: “short” (or tactical), “intermediate range” or “intercontinental.” The precise range criteria for these categories are unclear, however. In a North Korean dictionary published 20 years ago, “short range” was defined as 1,000 km or less, “medium range” as 1,000 km to 5,000 km, “long range” as 5,000 km or more, and “intercontinental” as at least 6,400 km. However, it is unclear whether or how these definitions apply now, since there was not “intermediate-range” category at the time.

North Korea’s ballistic missiles are also distinguished by series. Prior to the Eighth Party Congress, there were only two recognized ballistic missile series, Hwasong and Pukguksong. Hwasong-series missiles use liquid propellant and a hot launch system for firing, and even numbers are used to identify the different models. North Korea’s state media has reported test launches of Hwasong-8, Hwasong-10, Hwasong-12, and Hwasong-14 missiles. The Pukguksong series uses solid fuel and a cold launch. It includes submarine-launched ballistic missiles (SLBMs), identified by odd numbers, and missiles launched from land-based silos, which have been even-numbered. The North Korean state media has reported tests of Pukguksong-1, Pukguksong-2, and Pukguksong-3.

At the military parade held on October 10, 2020, North Korea unveiled a new Pukguksong missile labeled “4S.” It was speculated that the S (actually a Hangul letter) stood for sujung, or underwater (launched). (There was some speculation that the symbol was really the roman letter A, but the use of Western letters for the name of a North Korean weapon is unthinkable.) An unidentified missile launched in a military drill on September 25, 2022, was reportedly fired from an underwater silo in a reservoir in the northwestern part of the country, but this weapon was not the Pukguksong-4S. An “underwater- and ground-launched solid-fuel intercontinental ballistic missile,” mentioned in the five-year defense plan—whether part of the Pukguksong series or a new class—is probably in the development stages, but it is unlikely to be operational anytime soon.

Debut of the Hwasongpho Series

At the Eighth Party Congress, a new series name, Hwasongpho, came into use, when Kim Jong-un began referring to the Hwasong-15 ICBM as Hwasongpho-15(*1). The missile had its maiden flight on November 29, 2017. Like the Hwasong series, Hwasongpho missiles are liquid fueled and hot launched. But in the statement accompanying the test, North Korea described Hwasong-15 as ”much greater advantages in its tactical and technological specifications and technical characteristics than Hwasong-14,“ noting that it is ”capable of carrying super-heavy warhead and hitting the whole mainland of the U.S.“ This description, combined with the use of an odd number for the model, clearly distinguished it as a new type of ballistic missile, even before the change in series name.

In October 2021, the North Korean government held a weapons exhibition dubbed “Defence Development Exhibition Self-Defence-2021,” and photos and videos released in conjunction with the expo alerted the world to two additions to the series: Hwasongpho-11Na (the “Na” signifying a second, improved version), a short-range ballistic missile, and the Hwasongpho-17, an ICBM.

Judging from photographic images, Hwasongpho-11Na is the same as the “new weapon” that North Korea test-fired on August 10 and August 16, 2019. The “tactical guided weapon” that underwent demonstration testing on March 21, 2020, and the “tactical guided missile” for which acceptance testing was conducted on January 17, 2022, are also presumed to be “Hwasongpho-11Na” missiles. It has already been operationally deployed as an SRBM system.

The ICBM Hwasongpho-17 was first displayed to the world in the military parade of October 20, 2020, but its official name was only revealed on March 24, 2022, when Pyongyang announced a test of the system. The Hwasongpho-17 underwent its final testing on November 18, 2022, indicating that development is now complete. The “missile to strike and annihilate any strategic targets within a range of 15,000 kilometers” featured in the five-year plan probably means the Hwasongpho-17. Plans call for Hwasongpho-17 to be launchable from underground silos (yet to be built) as well as the transporters currently used for launching. 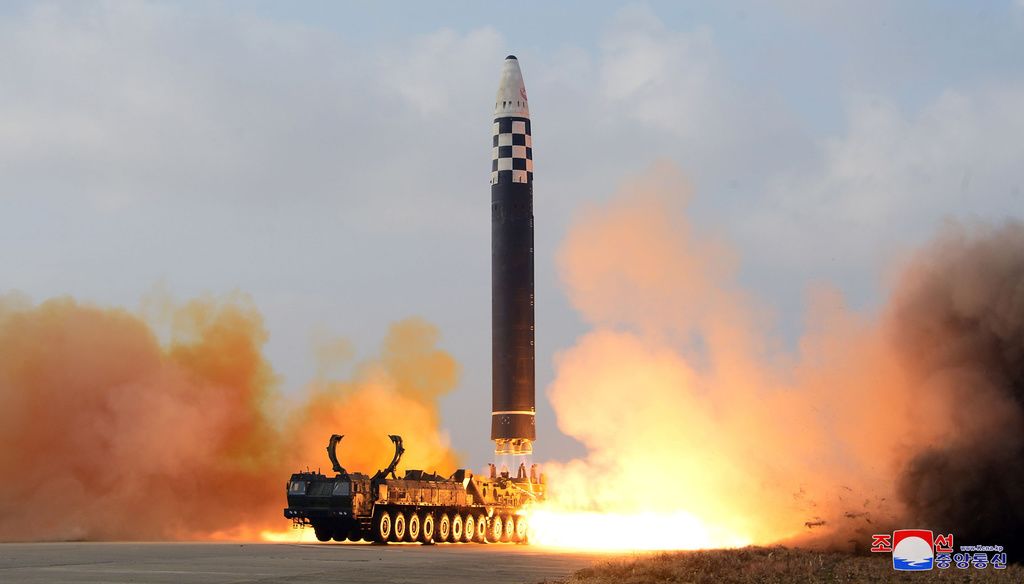 Photo of a test launch of the Hwasongpho-17 ICBM on November 18, 2022, distributed by the Korean Central News Agency. (© Korea News Service/Kyōdō)

Meanwhile, North Korea has continued its development and testing of the Hwasong series. It conducted a test launch of the hypersonic Hwasong-8 missile on September 28, 2021, and an acceptance test of the Hwasong-12 on January 30, 2022. Based on Hwasong-8, it was initially thought that the “hypersonic gliding flight warheads” of the five-year plan was to be mounted on a Hwasong missile, but the model and number of the “hypersonic missile” tested on January 5 and January 11, 2022, were not released. It is possible, therefore, that the hypersonic glide missile warhead is meant to be mounted on a different type of missile.

A test launch of a submarine-launched ballistic missile was reported by the North Korean media on October 19, 2021, but the series and number of the missile launched on that date were not identified, and there have been no additional reports of an SLBM since then. However, Japanese, US, and South Korean authorities believe that SLBMs were test-fired during 2022. Presumably, such launches were not publicized in North Korea because they were undertaken by the army as military drills.

In addition to the above, ballistic missiles were launched from rail cars by a “railway-borne missile regiment” on September 15, 2021, and January 14, 2022, according to North Korea’s state media. These missile launches are not associated with any weapons programs announced at the Eighth Party Congress, and the series and number of the missiles were not identified.

The purpose of this diversified missile development is to improve North Korea’s deterrent capability by increasing its options for delivering nuclear warheads and other weapons of mass destruction so as to ensure a successful counterstrike. In the event that deterrence fails, the army might have recourse to nuclear weapons to subdue the enemy. Having a wide range of delivery options would increase the chances of evading interception.

Pyongyang’s policy of escalating missile development and production demonstrates that it is seriously considering scenarios for the use of nuclear weapons in a conflict, bringing it within range of its stated nuclear strategy. Its diversified development of missile systems will continue at least through 2025, the final year of the current five-year defense plan, and we can also expect tests of lighter and smaller nuclear weapons. Thus far, Japan has not been able to come up with an answer to North Korea’s diversified missile development.

(Originally written in Japanese. Banner photo: One of the North Korean missile launches that took place between September 25 and October 9, 2022, as seen in a photo released by the Korean Central News Agency on October 10. © Korea News Service /Kyōdō.)

(*1) ^ Many Western sources continue to use the Hwasong designation.—Ed.