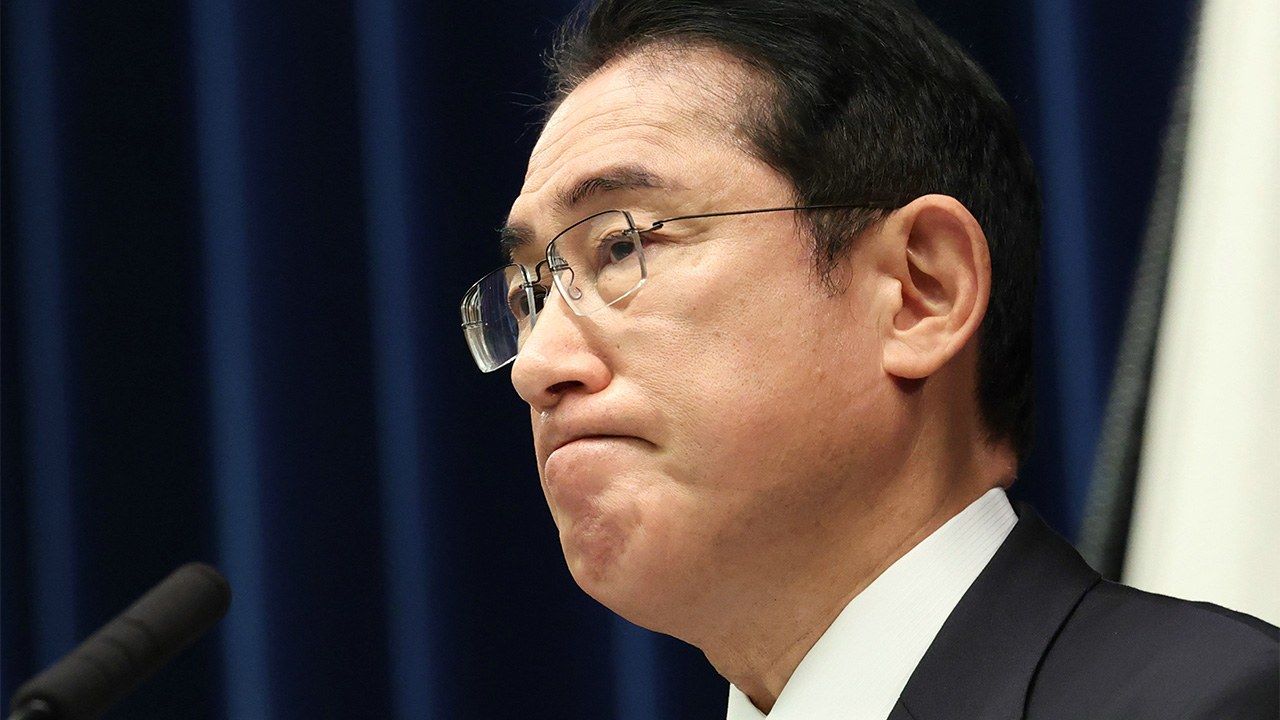 Japanese Politics in 2023: Can Kishida Recover Before the Local Elections?

Politics Jan 5, 2023
In late 2022, fallout from the Unification Church controversy and a string of cabinet resignations sent the Kishida cabinet’s approval rating plunging to 30%. Can Prime Minister Kishida regain his political footing in time to prevent a rout in the April unified local elections? A look at the year ahead in Japanese politics.

Prime Minister Kishida Fumio has made it through 2022, notwithstanding a rocky extraordinary Diet session (October 3–December 10) overshadowed by scandals that forced the resignation of four cabinet members in just two months. But the damage to his leadership was unmistakable, as key members of his own Liberal Democratic Party—including cabinet ministers—openly broke ranks over his plan to raise taxes to cover an increase in defense spending. When the Diet reopens in late January, the prime minister and his cabinet will doubtless face yet more grilling on LDP ties with the Unification Church (formally, the Family Federation for World Peace and Unification) and other simmering controversies. With the April unified local elections in the offing, the Kishida administration may be obliged to play a defensive game in the first half of 2023.

A Boost from Diplomacy?

Facing a hostile domestic climate, Kishida could be banking on a strong performance on the international stage to win support at home.

The prime minister is hoping to visit Washington in mid-January, before the start of the next Diet session, although plans have yet to be finalized. Eager to shore up the Japan-US alliance, Kishida wants to meet with President Joe Biden to personally explain Japan’s new National Security Strategy and other key defense documents, which were revised in late 2022 to specify development of a “counterstrike capability”—that is, the capacity to launch an attack on enemy territory, such as missile bases, under certain conditions. The trip, if it pans out, will be the prime minister’s first visit to the White House since October 2021, just after he took office. Kishida also hopes to visit European allies Britain, France, and Italy in preparation for May’s Group of Seven Hiroshima Summit, which Japan will host and chair.

In late January, however, it will be back to business in the Diet, where the ruling party needs to pass the fiscal 2023 budget by the end of March in advance of the April unified local elections. The elections will be followed in May by the G7 summit in Kishida’s native Hiroshima, a city known for its antinuclear activism. Against the background of the war in Ukraine and deepening international tensions, Kishida will appeal for a world free of nuclear weapons, a cause he has called his life’s work. He is doubtless hoping that his message will resonate domestically as well as internationally.

But diplomatic stagecraft alone is unlikely to restore the confidence Kishida lost during the last (extraordinary) session of the Diet, when three members of the cabinet were forced to step down: then Minister for Economic Revitalization Yamagiwa Daishirō, over previously undisclosed links with the Unification Church; then Minister of Justice Hanashi Yasuhiro, after a flippant remark concerning the death penalty; and then Minister for Internal Affairs and Communications Terada Minoru, in the wake of media reports alleging misuse of political funds. They were subsequently joined by reconstruction minister Akiba Kenya, who Kishida effectively dismissed in late December after questions over past funding came to light. In each case, Kishida came under criticism for waiting until the public uproar was deafening to take action.

Kishida has faced similar criticism in his handling of the Unification Church controversy, triggered by the July 2022 assassination of former Prime Minister Abe Shinzō. At a December 10 press conference following the close of the Diet, Kishida took credit for the eleventh-hour enactment of legislation targeting coercive solicitation of donations (a practice for which the UC has become notorious) and offering relief for victims of such tactics. In fact, the cabinet had initially intended to postpone submission of the bill until the 2023 ordinary session of the Diet—partly in deference to the Kōmeitō (the LDP coalition partner that draws its support from another “new religion,” Sōka Gakkai). It was only after three cabinet resignations put Kishida on the defensive that he yielded to pressure from the top two opposition parties, the Constitutional Democratic Party of Japan and Nippon Ishin no Kai (Japan Innovation Party), which have forged a parliamentary alliance.

Meanwhile, the Tokyo District Public Prosecutors Office has been investigating the political organization of LDP politician Sonoura Kentarō, who has served as an adviser to the prime minister, on suspicion of underreporting proceeds from fundraising parties. Sonoura resigned on December 21, but when the Diet reconvenes, the prime minister will doubtless find himself back on the defensive as the opposition parties go on the attack in the Budget Committee.

Against this background, there are deep concerns in the government and ruling party that the LDP will take a hit in the April local elections over its relationship with the Unification Church. (While the UC has cultivated ties with non-LDP politicians as well, such links seem to be heavily concentrated within the ruling party.) With the enactment of legislation targeting the UC’s coercive fundraising, the prime minister is doubtless eager to put the matter behind him in the coming months but that seems like wishful thinking. Some continue to call for an investigation into former Prime Minister Abe’s own involvement with the UC, citing testimony from an LDP lawmaker that a certain faction leader (presumed to be Abe) was working with the church to “allocate” UC bloc votes among LDP candidates competing in multiseat constituencies. (Kishida has ruled out an LDP probe into the matter.) In any case, ties between the UC and the LDP are believed to be stronger in local assemblies than in the Diet. Under the circumstances, it seems inevitable that the opposition will make hay out of the LDP-UC relationship going into the unified elections.

It must be a disheartening reversal of fortune for Kishida. After taking office in October 2021, he led the LDP to victory in the October 2021 general election and presided over a landslide in the July 2022 vote for the House of Councillors. At that point, the cabinet’s approval rating was approaching 50%, according to a Jiji Press poll, and Kishida seemed well positioned to consolidate control of the party and hold onto the post of prime minister for two or three years. But the UC controversy, widespread opposition to Abe’s state funeral, and successive cabinet resignations, have had their effect. In a December Jiji poll, voter support for the cabinet had plunged to 29.2%.

Missteps amid the Post-Abe Power Vacuum

At the same time, the power dynamics within the LDP have shifted abruptly since Abe’s death, auguring further difficulties ahead. This is partly owing to Kishida’s own missteps.

Right up through the July House of Councillors election, Kishida steered an ultra-safe policy course, placing top priority on his own cabinet’s stability. He consistently postponed action on important but divisive issues, such as defense spending, nuclear power, and social security reform. Now that the time has come for some difficult decisions, he needs the LDP’s unanimous support, and there are signs that it could prove difficult to muster.

Kishida’s dovish, centrist leanings have long irritated the conservative wing of the ruling party, led by former Prime Minister Abe. As the leader of the LDP’s largest faction, Abe applied pressure, privately and publicly, but in the end he was willing to compromise in the interests of party unity, and he had the ability to keep his numerous followers in line once a policy decision was reached. Now, that indispensable backup is gone, and the process of forging consensus is in Kishida’s hands.

The results have not been promising. In December, a hastily drafted initiative to finance the impending defense buildup with tax hikes in excess of ¥1 trillion ran into vocal opposition from cabinet ministers and other politicians in Abe’s former circle. Kishida managed to quell the rebellion—at least temporarily—with a promise to postpone the tax plan, but the incident does not bode well for his management of government affairs going forward.

Riding Out the Storm

The economy is another concern. The war in Ukraine and the weak yen have pushed up the price of energy and other imports, squeezing household budgets. During the extraordinary Diet session last fall, the government and the ruling party passed a supplementary budget including funding for measures to lighten the burden, with a focus on energy bills. But their scale is limited, and it is questionable whether they will have much impact. The government has thus far done little to spur growth in wages. If the economic recovery continues to stall, public dissatisfaction with the Kishida cabinet is likely to mount further.

Kishida managed to project determination and confidence at his December press conference, notwithstanding his low approval rating and weakened grip over the ruling party. The truth is that, with no scheduled national elections on the horizon, and no obvious candidate to succeed Kishida as leader of the LDP, the prime minister can afford to sit tight in hopes of riding out the storm.

Not surprisingly, Kishida ruled out a snap election anytime soon. “If we dissolved the Diet now, we would definitely lose,” admits an LDP official close to the prime minister. Kishida’s only choice at present, he says, is to tackle the challenges of government head-on.

Kishida’s faction is only the fifth largest in the LDP. The prime minister will be depending on the continued cooperation of LDP Secretary General Motegi Toshimitsu and LDP Vice-President Asō Tarō—leaders of the second and third largest factions, respectively—as he struggles to regain his footing and pursue his policy agenda.

Kishida also dismissed the idea of another cabinet shakeup, but some in the party believe such a change is needed—preferably before the Diet reconvenes—to halt the LDP’s slide in advance of the April elections. There has even been talk of expanding the current LDP-Kōmeitō coalition to include the Democratic Party for the People (a center to center-right party with 10 members in the House of Representatives).

At this stage, time is still on the prime minister’s side. But after the Hiroshima Summit we are likely to see more active political maneuvering aimed at the LDP leadership election, scheduled for the early autumn of 2024. If Kishida seriously hopes for another term as LDP president and prime minister, he will need to shift to the offensive and consider a snap election to shore up his base. That’s when things could get interesting.