Have Esports Finally Taken Off in Japan?

Japan’s electronic sports market grew to ¥4.8 billion in 2018, according to an estimate by Gz Brain, which issues the video-game magazine Famitsū. The esports market expanded 13-fold from 2017, and is expected to further double by 2022, to around ¥9.9 billion. 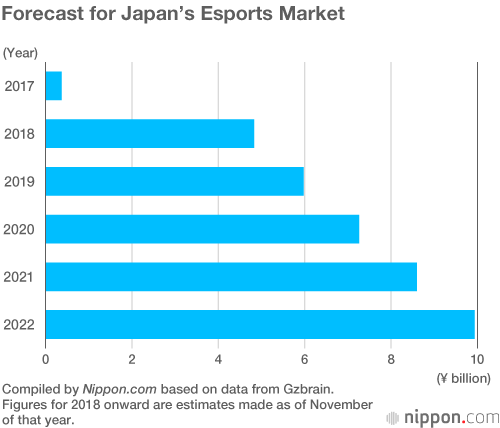 Large-scale esports competitions were held in Europe and the United States from the 1990s, leading to the formation of professional teams and leagues. Professional gamers can earn the equivalent of ¥100 million a year or more.

Although Japan has lagged far behind in the esports trend, in February 2018 the Japan Esports Union was formed. This new organization has begun to issue professional licenses for gamers. The creation of JESU has not only brought a rapid increase in media coverage but also led to the first TV broadcasts of esports-related programs, thereby expanding sponsorship revenue.

Money from sponsors, which includes sponsorship fees for games and competitions and advertisement fees, accounts for the bulk of overall esports revenue, at 75.9%. Other sources of revenue include income from microtransactions and prizes (8.9%), broadcasting rights (8.4%), and ticket sales (5.3%). 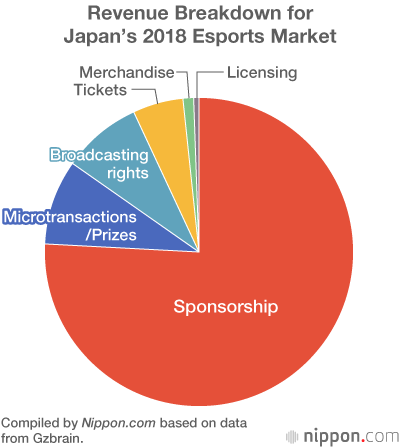 In 2018, the number of esports fans in Japan who attended competitions or watched broadcasts rose year on year by 66% to a total of 3.83 million. This figure is expected to rise to 7.86 million by 2022. Gzbrain also estimates that among the roughly 25 million people in Japan who currently view game-related video content, around 15% of them are esports fans. The esports fan base is expected to expand as a result of such factors as active efforts by game makers to promote competitions, an increase in TV broadcasts, and more opportunities for attending events.

Prospects for appearing on the largest sporting stage appear dim, however. At the Olympic Summit held in Lausanne, Switzerland, in early December, the International Olympic Committee issued a statement saying that it is “premature” to include esports within the Olympics. The decision reflects concerns about the high degree of commercialism and emphasis on entertainment within the esports market.