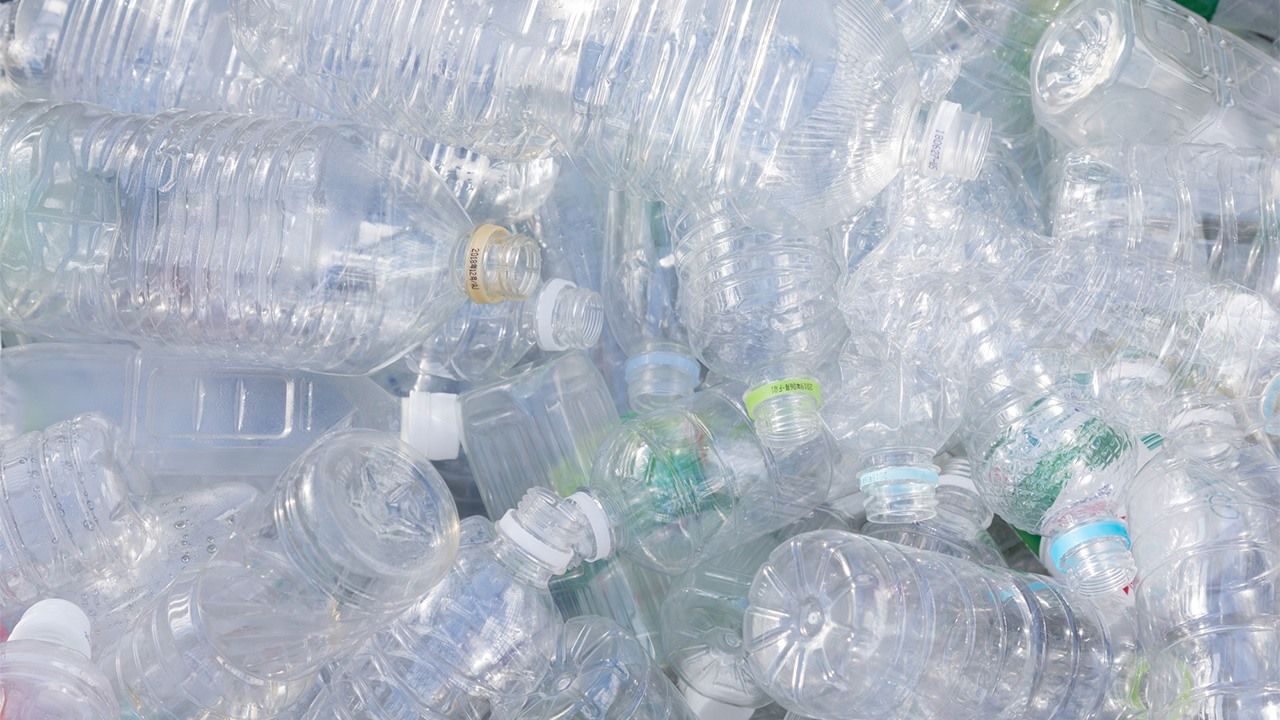 Environment Mar 4, 2019
Around 22.7 billion PET bottle products are shipped every year in Japan, averaging out to around 180 bottles per person. At the same time, almost 85% of them are recycled, which is one of the highest rates in the world.

The use of polyethylene terephthalate (PET) bottles for soft drinks was first allowed in Japan in 1982. These groundbreaking containers were lighter, less fragile, and easier to carry than the glass bottles mainly used up to that point. Initially, the soft-drink industry adopted a voluntary ban on the use of PET bottles smaller than the one-liter size out of concerns for increased littering, but that ban was lifted in 1996, spurring on wider usage of the plastic bottles.

According to the Council for PET Bottle Recycling, shipments of PET bottles in fiscal 2017 totaled 22.7 billion containers, averaging out to the huge figure of around 180 bottles per person in Japan.

Created by Nippon.com based on materials published by the Council for PET Bottle Recycling.

As PET bottles became standard, industry groups sought to reduce waste volume through recycling and making bottles lighter. As of fiscal 2017, the recycle rate for PET bottles was 84.8%, which is just slightly below the target rate of 85%. The level of PET bottle recycling in Japan is among the highest in the world. 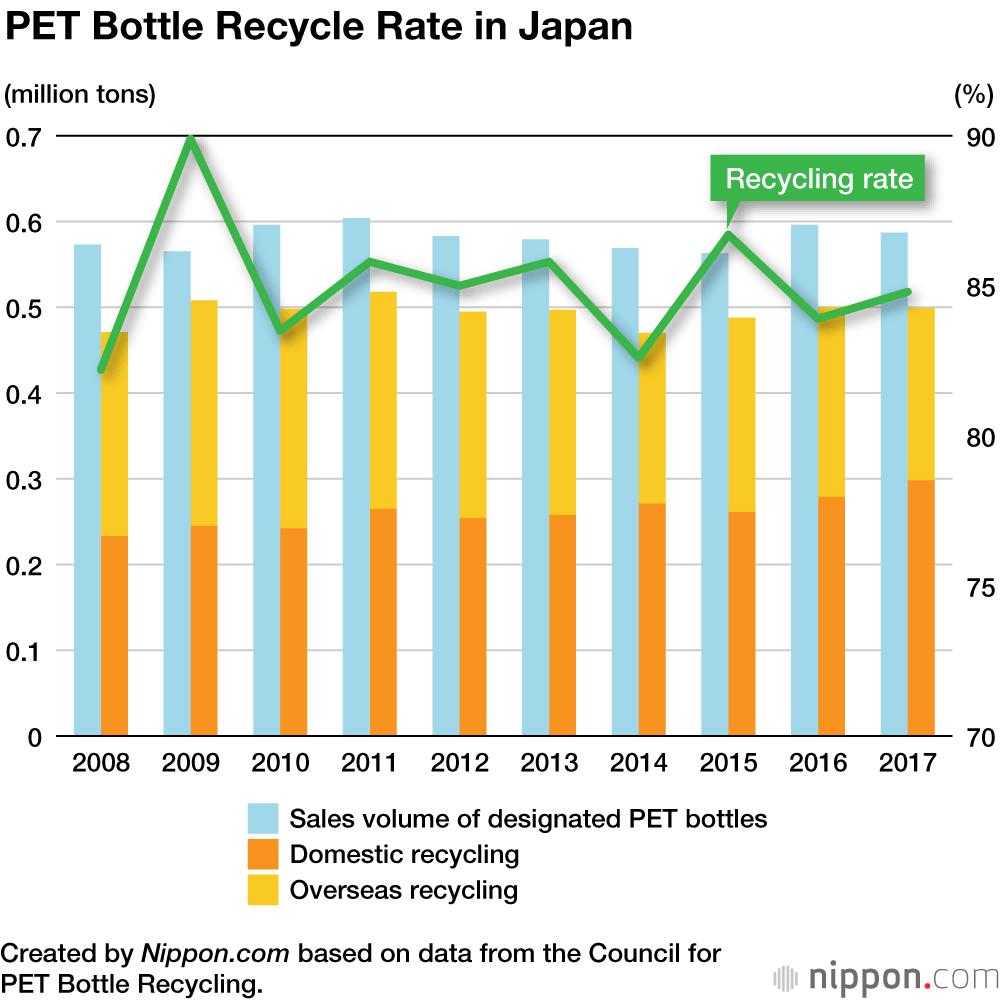 Many PET bottles used today have become amazingly thin. Advances in molding and filling technologies contributed to reducing bottle weight by 23.8% during the period from fiscal 2004 to 2017.

Around 2004, 500ml PET bottles generally weighed 25g to 30g, but in recent years more and more bottles are under the 20g level. Some of the lightest containers today are for mineral water like the 11.3g 550ml bottle for Suntory’s Minami Arupusu Tennensui and the 12g 555ml bottle for Coca-Cola Japan’s I Lohas. Companies are also adopting such environmentally friendly measures as using plant-based materials in their production of PET bottles. 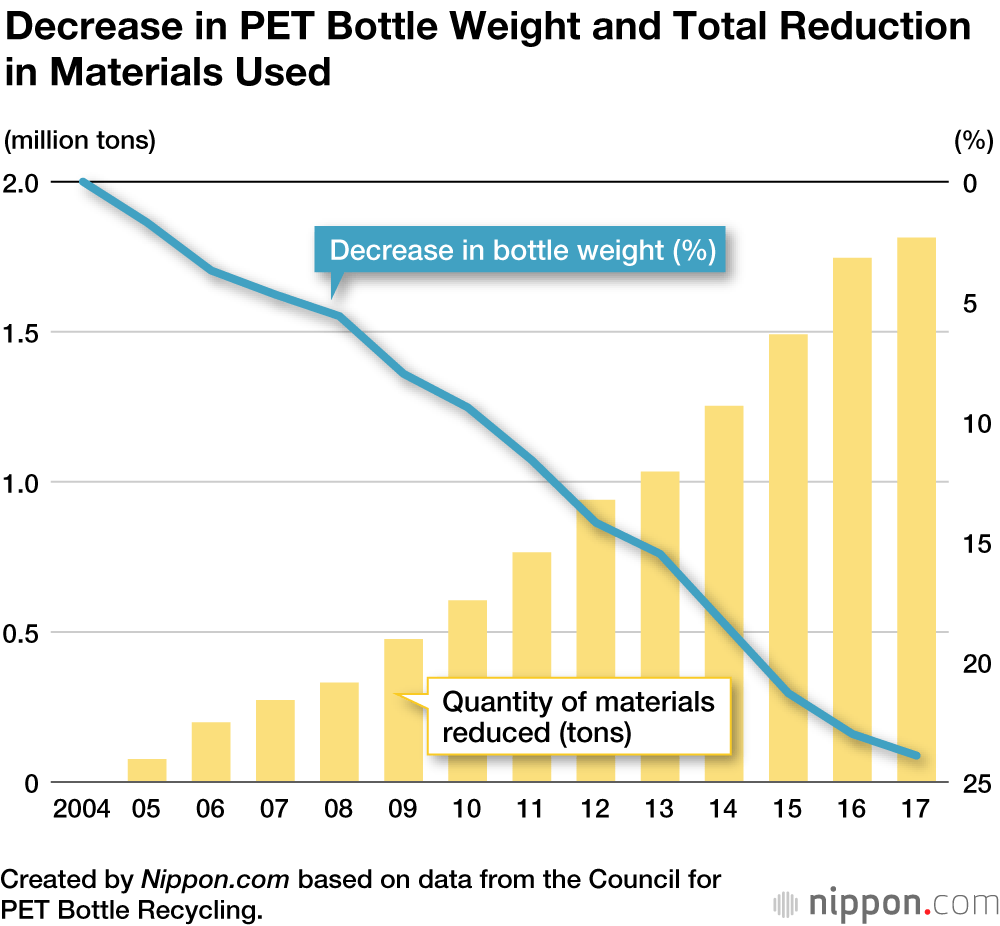 The Plastic Resource Reclamation Declaration—issued in November 2018 by the Japan Soft Drink Association together with soft-drink manufacturers and other industry groups—raises the goal of achieving the 100% effective utilization of PET bottles by fiscal 2030.