Japanese First Graders Dream of Being Bakers and Athletes

Work Apr 15, 2020
The coronavirus outbreak has brought large-scale school closures in Japan, but new elementary school children still have dreams of what they want to do when they grow up.

Kuraray, a major manufacturer of synthetic leather for school backpacks, has been conducting an annual survey since 1999 on what job Japanese first graders want to do in the future. For the past 22 years, the constant number one dream job for girls has been pâtissière or baker (26.0%). Boys’ top dream job continues to be athlete (18.8%).

Celebrity, singer, or model placed second (8.8%) as a dream job for girls for the ninth consecutive year. There were no new faces in the top 10 jobs. However, nurse, doctor, and police officer all rose by one place in a possible reflection of an attraction to work that protects people’s health and safety.

Police officer, the second top job for boys, has remained in this position for the last nine years, and this year had the highest ratio yet recorded with 15.1%. In the past, athlete has always scored high with more than 30% of boys usually wanting this type of job. In recent years though, popularity for the role of police officer is gradually rising. This is thought to be due not just to their activities in disasters, but also their holding of educational and PR events that children can participate in, like visits to police stations, which has led to an increased admiration among children. 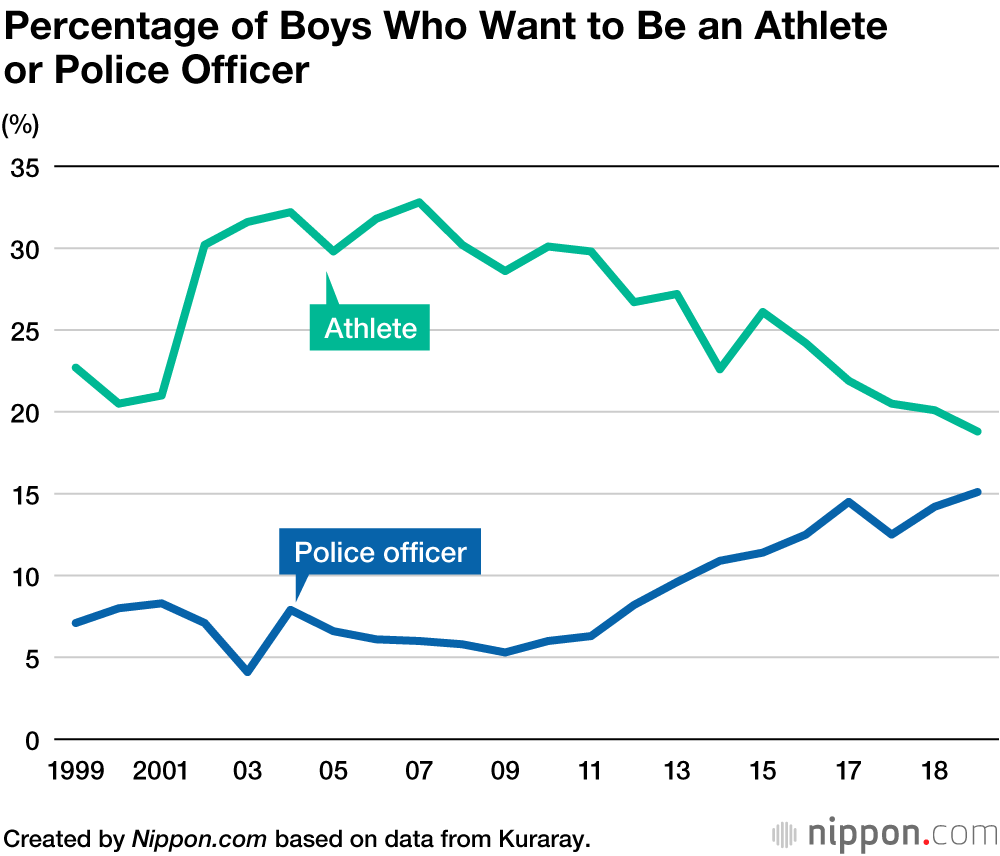 Compared to this, the parents of new first graders had slightly different ideas. Parents of girls most hope that they will become nurses (17.9%), and other medical-related positions also ranked high, with pharmacist in third place (7.9%), doctor in fourth (6.8%), and medical professional in fifth (6.0%). The number one parents’ choice for boys was public servant (19.8%). Apart from one time in 2009, public servant has remained top. For the first time, athlete did not appear in the top three choices and, overall, parents seem to want steady jobs for their children.

Jobs That Parents Want Their First Graders to Pursue (2020)

Created by Nippon.com based on the data from Kuraray annual survey