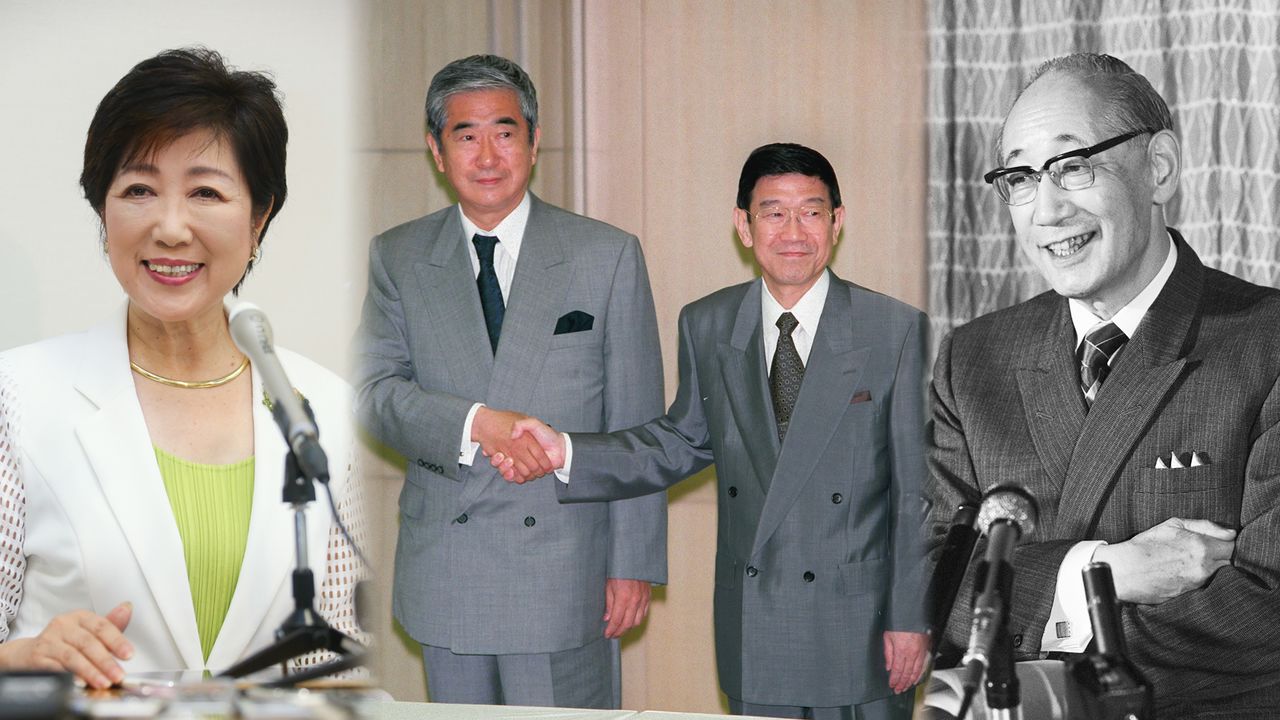 Politics Jun 5, 2020
As Tokyo heads to a gubernatorial election in July 2020, we look back at its postwar leaders.

The campaign period for Tokyo’s upcoming gubernatorial election officially starts on June 18, and voters go to the polls on July 5. While the incumbent Governor Koike Yuriko is yet to confirm whether she will stand for a second term, this is widely believed to be a foregone conclusion. Meanwhile, Japan’s governing Liberal Democratic Party has stated that it will not be backing any candidate to stand against her, and opposition parties are having difficulty selecting candidates to endorse.

Neither of the two previous governors, Masuzoe Yōichi and Inose Naoki, completed a full term in office, as both were forced to stand down over scandals. If Koike is reelected as expected, she will be the first governor to have made it to a second term since Ishihara Shintarō. In 2012, Ishihara stood down midway through his fourth term to run for national politics, nominating then Vice Governor Inose Naoki as his successor. Ishihara shares the record for being elected four times as Tokyo governor with Suzuki Shun’ichi. While Suzuki was governor for a record 16 years, Inose, who served only one year, holds the record for the shortest time in office.

In fronting Tokyo’s COVID-19 response, Koike Yuriko has drawn on her background as a news anchor. Her well-delivered briefings incorporate catchphrases like “the three Cs” to avoid (closed spaces, crowded places, and close-contact settings), giving her daily media exposure.

As the figurehead for an entire prefecture, governors often tend to be selected on the basis of their public profile as opposed to their political achievements. Political scientist Masuzoe Yōichi and nonfiction author Inose Naoki regularly appeared on televised debates and as talking heads on news shows.

Ishihara Shintarō is far and away the best-known person to become Tokyo governor, having been in the spotlight since he won the Akutagawa Prize in his early twenties and made headlines as part of a famous pair with his film star brother Yūjirō. Meanwhile, screenwriter Aoshima Yukio was a Naoki Prize recipient and man of many talents, known as a lyricist and media personality.

Minobe Ryōkichi, who was endorsed by progressive political parties, was an economist who appeared for two years on an NHK educational programme while lecturing at the Tokyo University of Education. Minobe’s knack for explaining economic concepts on the show using examples from the kitchen was a hit with viewers, and he presented it for three seasons.

Azuma Ryōtarō, who held a doctorate in medicine, was a pioneer of Japanese sports medicine, and served on the International Olympic Committee between 1950 and 1968, a role which he continued during his time as governor. Azuma was the ideal governor to oversee the 1964 Summer Olympic Games in Tokyo.

Of all the names on the list, only Suzuki and Yasui had purely political backgrounds. Before being elected governor, Suzuki was an administrative vice-minister in the Ministry of Home Affairs (now the Ministry of Internal Affairs and Communications). As vice governor, he supported the Azuma administration as it focused on hosting the Olympic Games. Yasui had served in the now defunct Home Ministry. Back when governors were still selected by public sector bureaucrats he served as Tokyo’s last nonelected governor, and he was the first to be elected after the transition to a system of public elections.

Of the ten people who have governed Osaka Prefecture since the post became an elected one after Word War II, six were born in Osaka, Kyoto, or Hyōgo. While Hashimoto Tōru was born in Tokyo, as he grew up in Osaka from the age of 10, he is still regarded as a local. Compare this with Tokyo, where only two out of nine elected governors were born in Tokyo, and not a single governor has hailed from neighboring Kanagawa, Chiba, or Saitama. This reflects the fact that Tokyo’s gubernatorial elections are more about choosing someone to represent Japan’s capital city than selecting someone from the region.