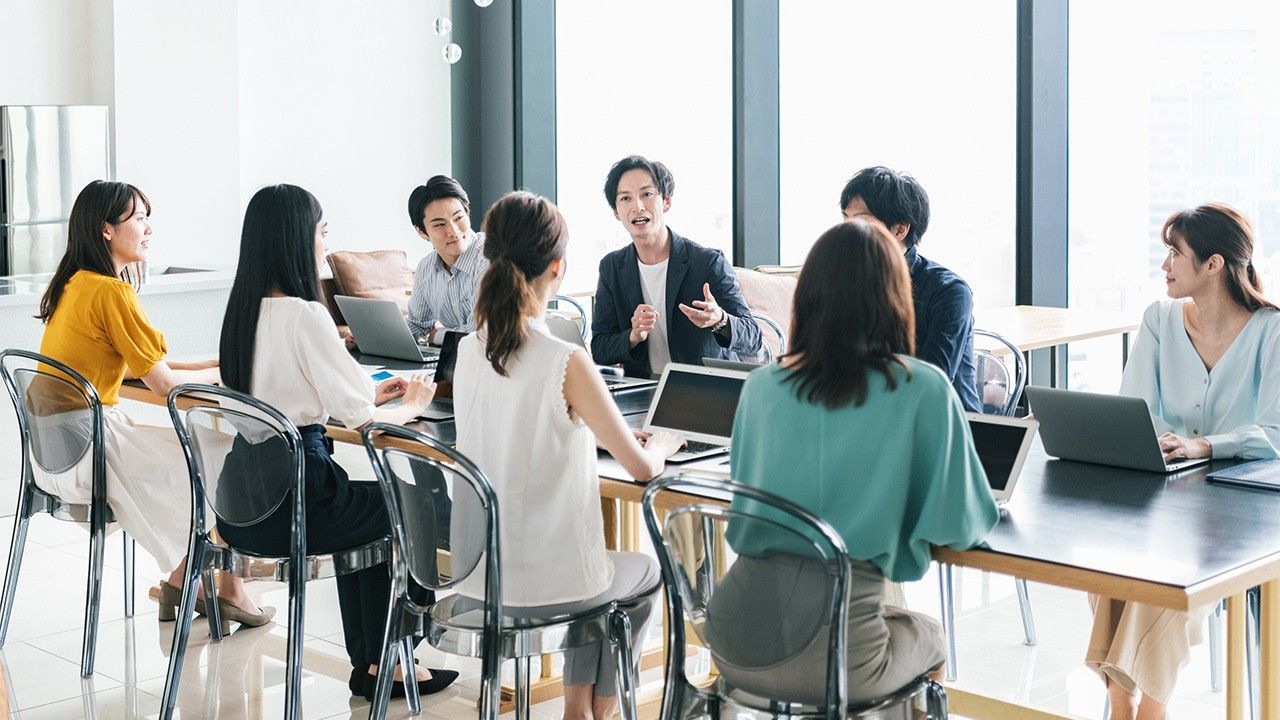 Survey in Japan Shows Less Concern About Changes in the Language

Culture Education Oct 8, 2020
A recent survey by the Agency for Cultural Affairs gives an idea of how people perceive the way Japanese is used these days.

The results of an annual survey conducted by the Agency for Cultural Affairs found that people in Japan are apparently more tolerant of language change.

This is the fifth time for the survey to include a question on deterioration of language use. In 1999, a total of 85.8% thought the Japanese language had got worse, whereas only 10.3% said it had not. This year’s survey is the first time for more than 30% of respondents to say it had not declined. 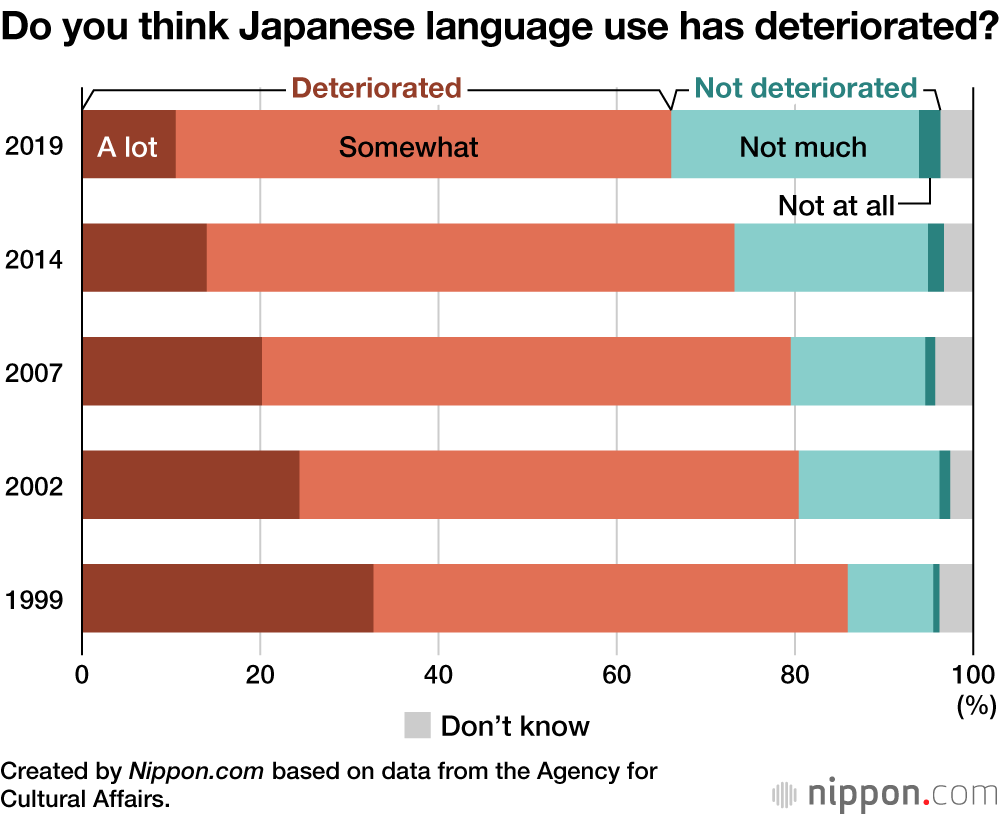 Those who saw language use as deteriorating were asked to give specific examples, with multiple answers allowed. The most common answer, cited by 63.4% of those respondents, was “improper use of honorific language,” while 61.3% pointed to “youth language.” Other common choices, each mentioned by over 30% of the respondents, were “overuse of new, trendy expressions” and “greetings.” 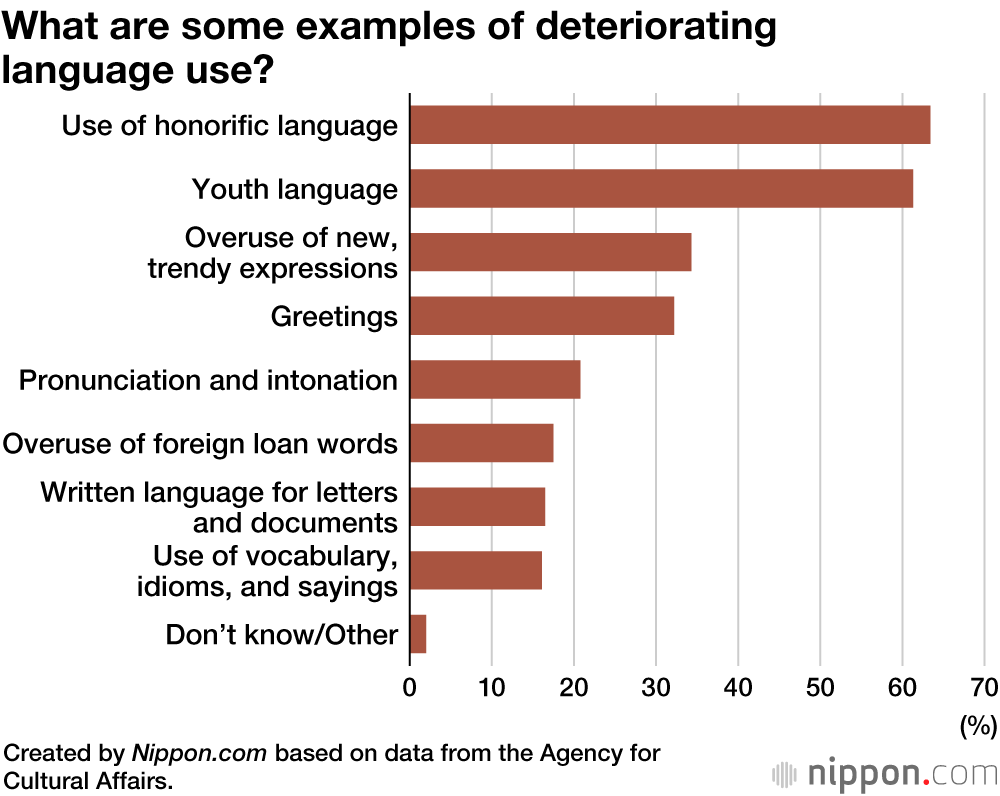 There were also questions about whether respondents were bothered by the use of common prefixes and suffixes. For example katsu (activities), as in the words konkatsu (seeking a marriage partner) and shūkatsu (preparations for end of life)(*1) were seen as acceptable when used in conversation by 90.6% of people. Some 87.6% of respondents saw no problem with the bizu suffix, as seen in kūru bizu (cool biz) and uōmu bizu (warm biz) dress codes, and 82.5% thought that the hara suffix used in words like pawahara (power harassment) and morahara (moral harassment) was reasonable.

The ara prefix (around) used when giving a rough age like arasā (around 30) and arakan (around 60; based on an abbreviation of kanreki, which means 60 years old) was less popular. The least acceptable of the five terms was the gan prefix for actions carried out whole-heartedly, as found in ganmi (stare closely) and ganmushi (completely ignore). 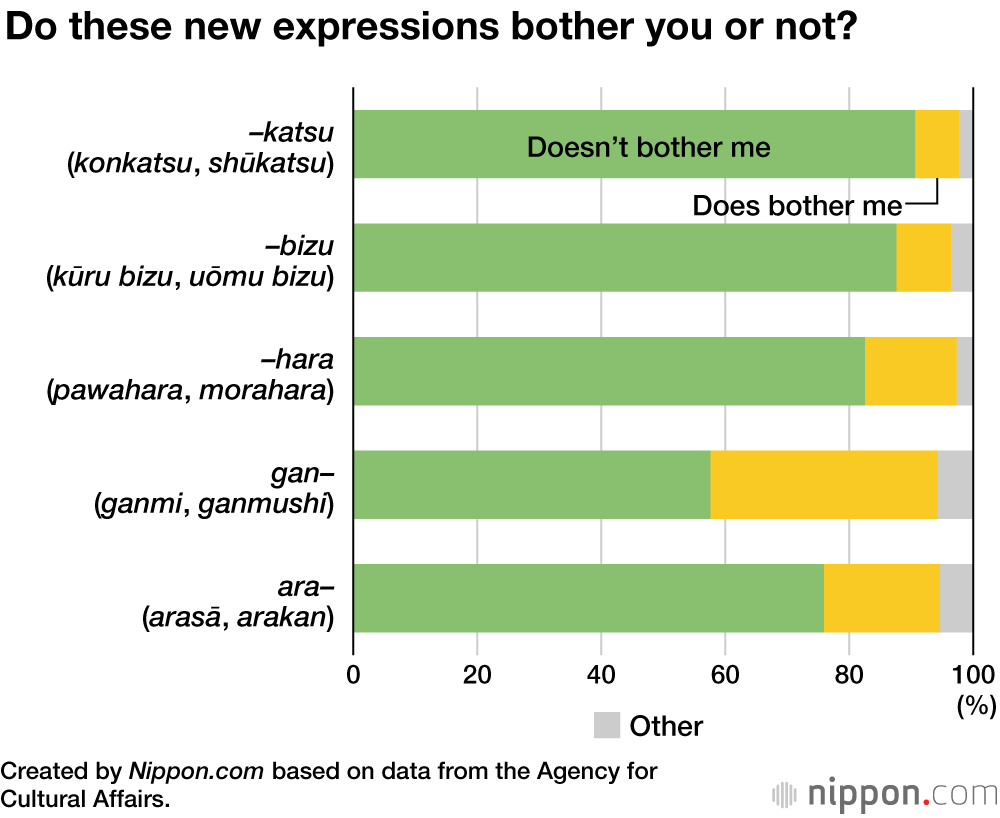 (*1) ^ Written as 終活 in Japanese and not to be confused with 就活 (also pronounced shūkatsu), a more established word for job hunting.