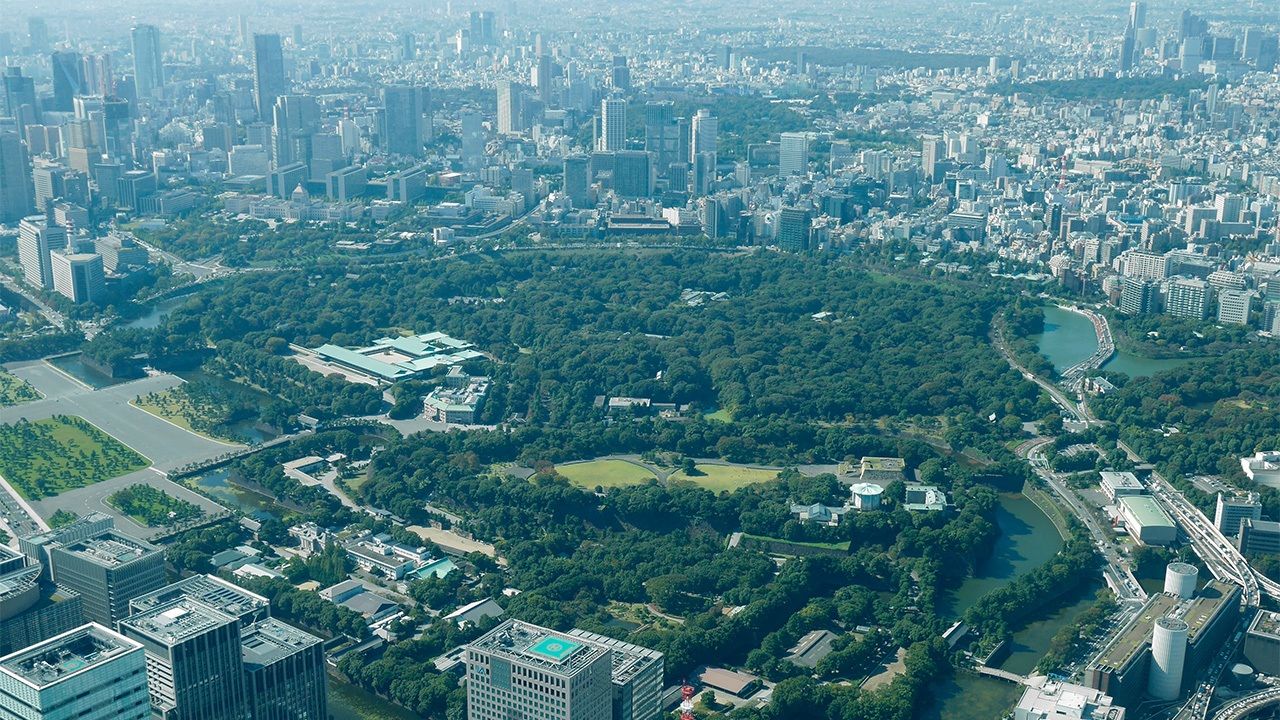 Economy Politics Lifestyle Jan 8, 2021
Japan’s initial budget for fiscal 2021 is a record high of more than ¥106 trillion. The increase in spending on social security due to the graying population, combined with the costs of responding to the COVID-19 pandemic, has placed a heavy burden on the budget.

On December 21, 2020, Japan’s cabinet approved a general-account budget totaling ¥106.6 trillion, a record high. This is more than ¥4 trillion higher than the initial budget for fiscal 2020, and marks the ninth consecutive year of record budgets and the third straight year for an initial budget of over ¥100 trillion.

Social security accounted for the largest proportion of spending, increasing year-on-year by ¥150.7 billion to ¥35.8 trillion. Defense expenditures rose by 1.2% to ¥5.3 trillion, reflecting spending in such new areas as outer space and cyberspace, resulting in the seventh straight year of record spending on defense. The budget for fiscal 2021 also includes ¥5 trillion set aside for pandemic countermeasures without the need for further Diet approval.

Government revenue, meanwhile, shrank by 9.5% compared to fiscal 2020, to ¥57.4 trillion. In order to make up for the revenue shortfall, the issuance of Japanese government bonds will swell by 33.9% year on year to ¥43.6 trillion. This means that 40.9% of next year’s budget will be funded by debt. 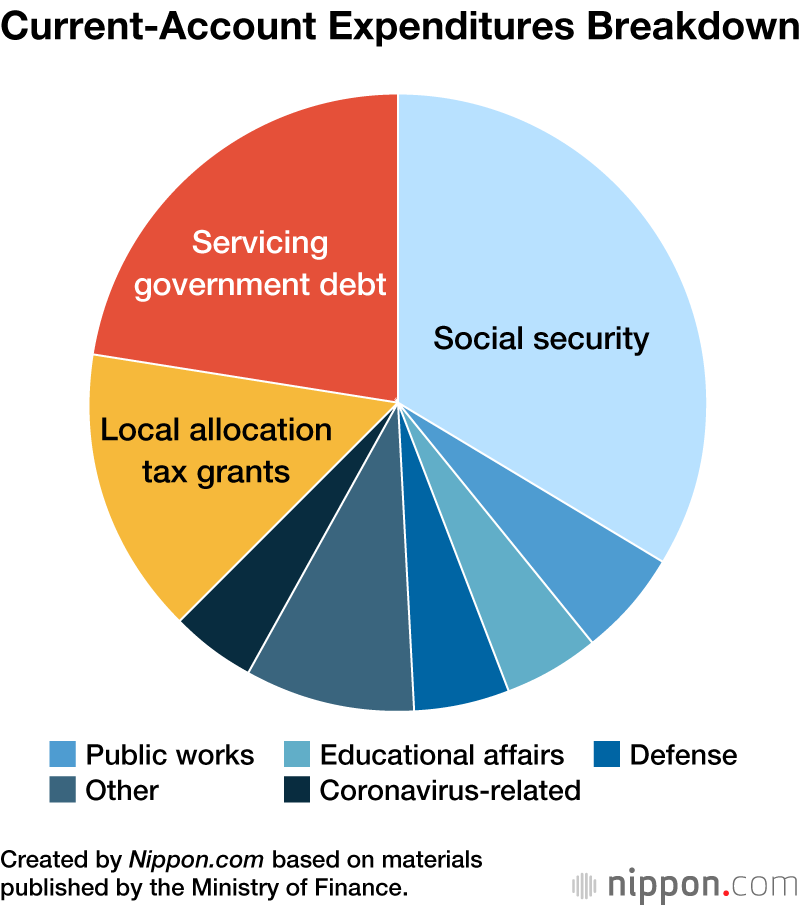 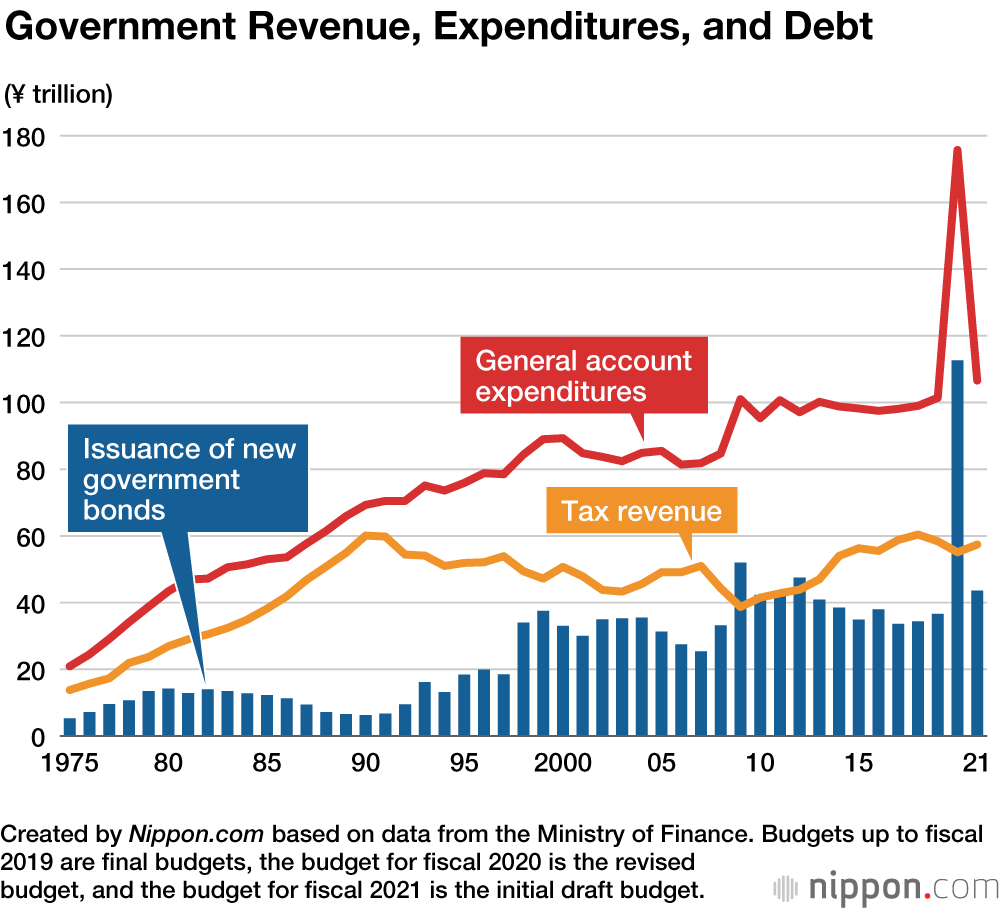 Until the 1980s, government revenue and spending in Japan did not diverge greatly, and the issuance of JGBs every year did not exceed ¥15 trillion. However, Japan’s balance of payments worsened as fiscal-stimulus and tax-cutting measures were repeatedly implemented during the long period of economic stagnation that followed the collapse of Japan’s bubble economy, leading to a reliance on the issuing of JGBs to fill the gap.

Government tax revenue recovered in the 2010s, and in October 2019 the consumption tax was increased to 10%, but the outbreak of the COVID-19 pandemic in fiscal 2020 has led to swelling government spending on economic measures, requiring further issuance of new JGBs. Outstanding government debt by the end of fiscal 2021 is expected to reach ¥990 trillion. The policy of low interest rates up to now has kept the interest payments on this debt low, but the burden could rise if changed economic circumstances lead to an increase in interest rates. 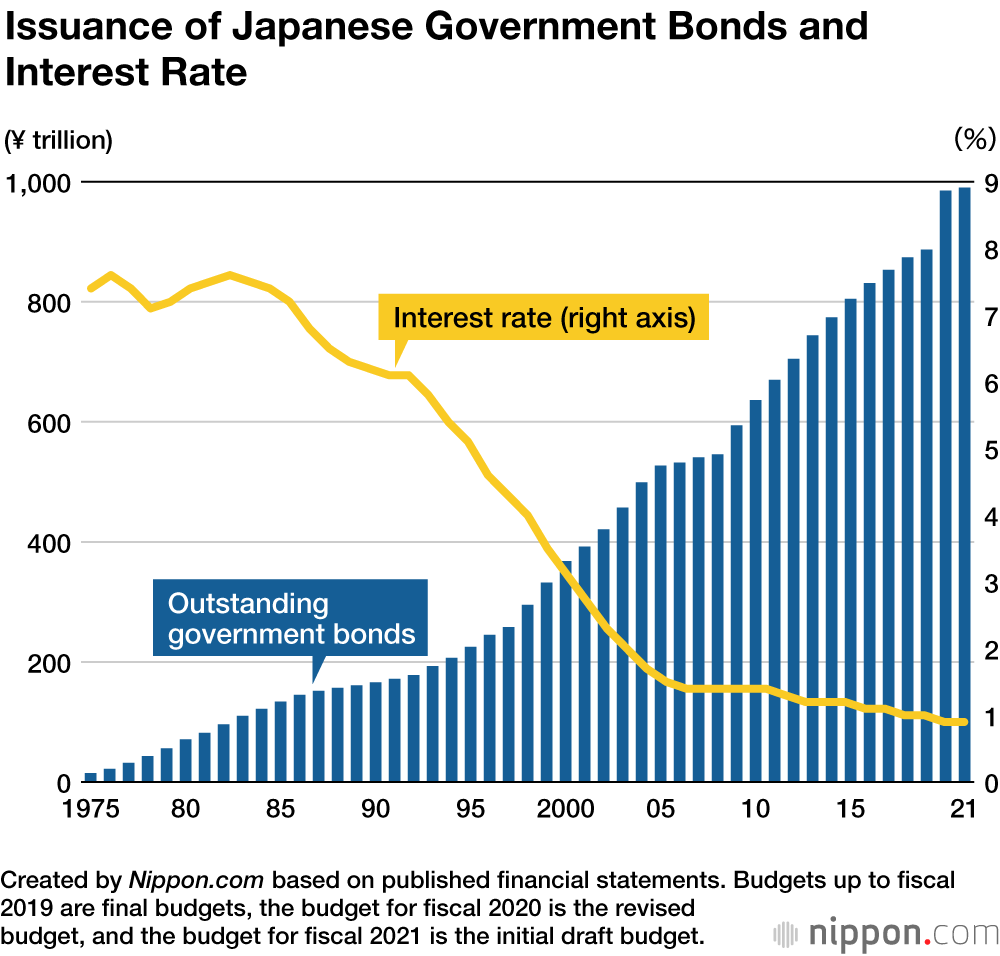