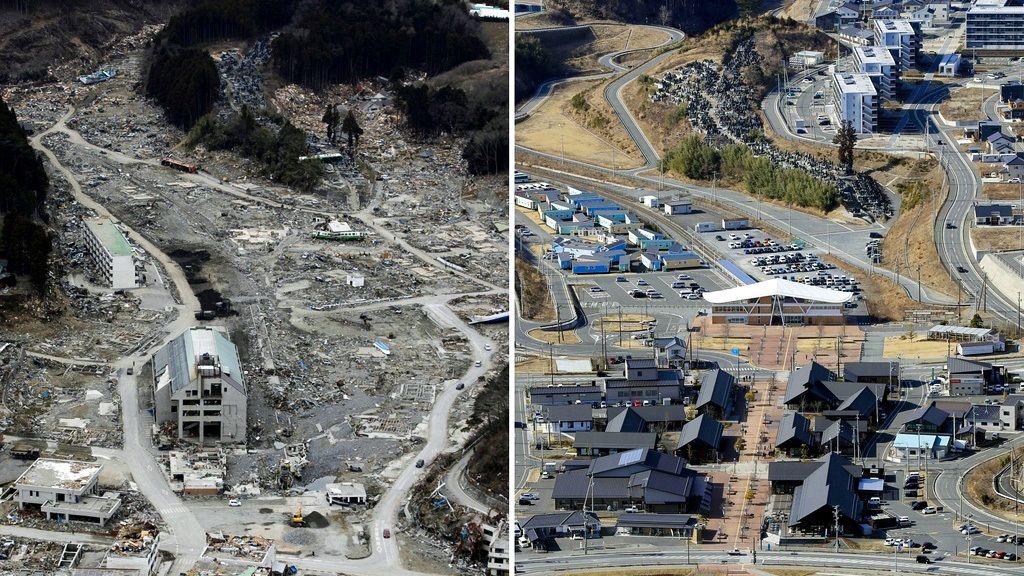 The State of Recovery in Tōhoku 10 Years after 3/11

Society Disaster Mar 10, 2021
A decade on from 3/11, we review data on recovery work along the Sanriku Coast and other parts of the Tōhoku region and the lingering effects of the Fukushima Daiichi nuclear disaster.

On March 11, 2021, Japan marks precisely 10 years since the Great East Japan Earthquake brought powerful shaking to much of Japan and smashed the Tōhoku region’s Pacific coast with a massive tsunami. Below we look at the progress made to date to reconstruct shattered communities and economies.

Notes: Fatalities include disaster-related deaths from suicide or illness. Deaths and destroyed homes also include figures from four municipalities in Nagano and Niigata Prefectures following a March 12, 2011, earthquake centered in northern Nagano thought to be related to the Great East Japan Earthquake.

Created by Nippon.com based on Reconstruction Agency data. 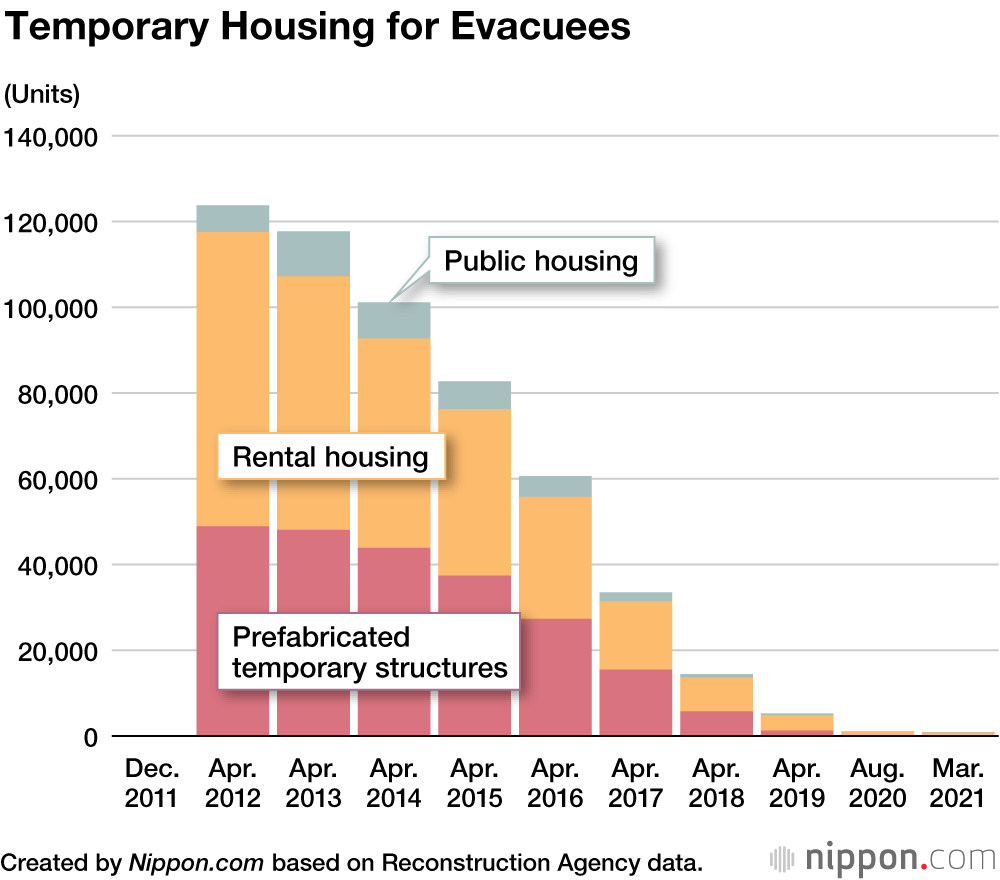 Rebuilding communities and supporting disaster victims in putting their lives back together has been an expensive endeavor. As of the end of March 2021, the government will have spent an estimated ¥38.9 trillion on recovery over the last 10 years, according to Reconstruction Agency figures. This includes ¥13.46 trillion, the largest amount, on constructing permanent housing and rebuilding infrastructure in tsunami-affected towns. Another ¥7.4 trillion has been devoted to recovery efforts following the Fukushima Daiichi nuclear disaster. The government expects to spend an additional ¥1.6 trillion on the second stage of the recovery process over the next four years. 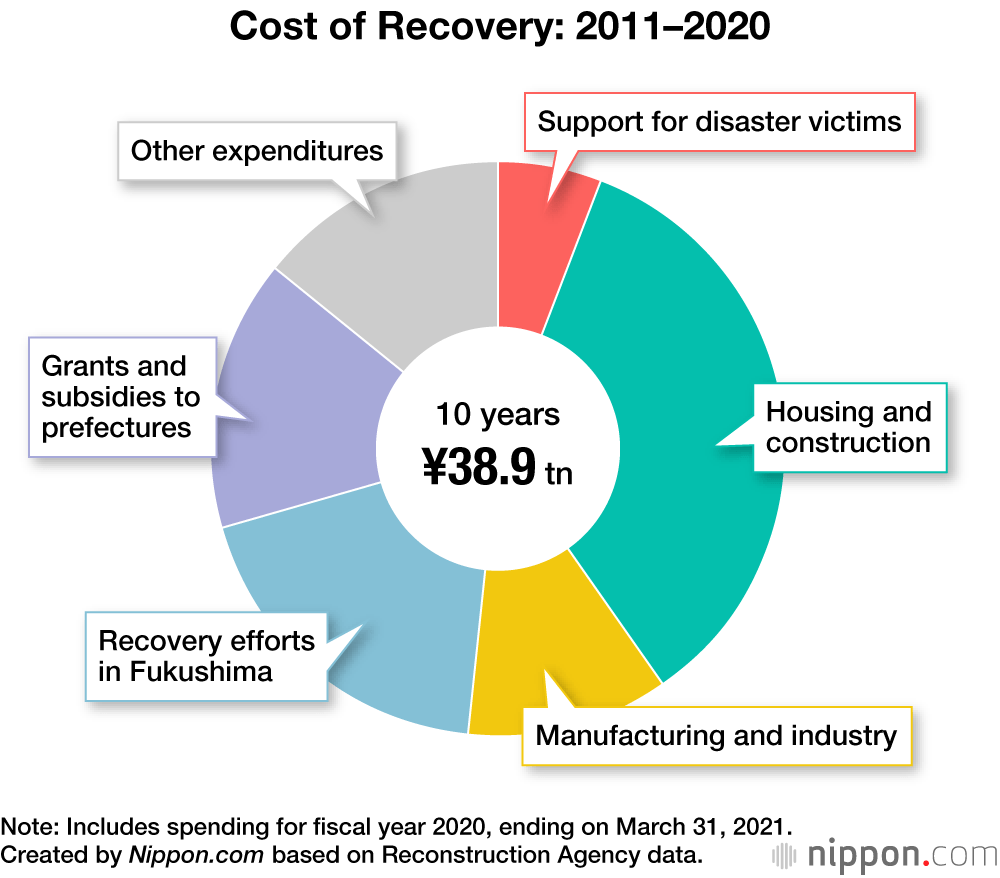 The tsunami had a devastating toll on agriculture, fisheries, and other local industries. In the decade since the disaster, projects focused on practical tasks like removing sediment, rejuvenating salt-damaged soils, and repairing irrigation and drainage systems have succeeded in restoring 94% of damaged farmland, as of the end of January 2021. Similar progress has been made in returning fisheries to their previous capacity, with 100% of fishing ports and related facilities being restored as of the end of 2020. As communities have rebuilt, tourism, particularly from overseas, has steadily improved. In 2019, 1.68 million foreign visitors stayed at hotels and other lodgings in the six prefectures that make up Tōhoku. Although COVID-19 reduced this figure significantly in 2020, authorities have set the postpandemic goal of attracting 1.5 million overseas visitors to the region annually. 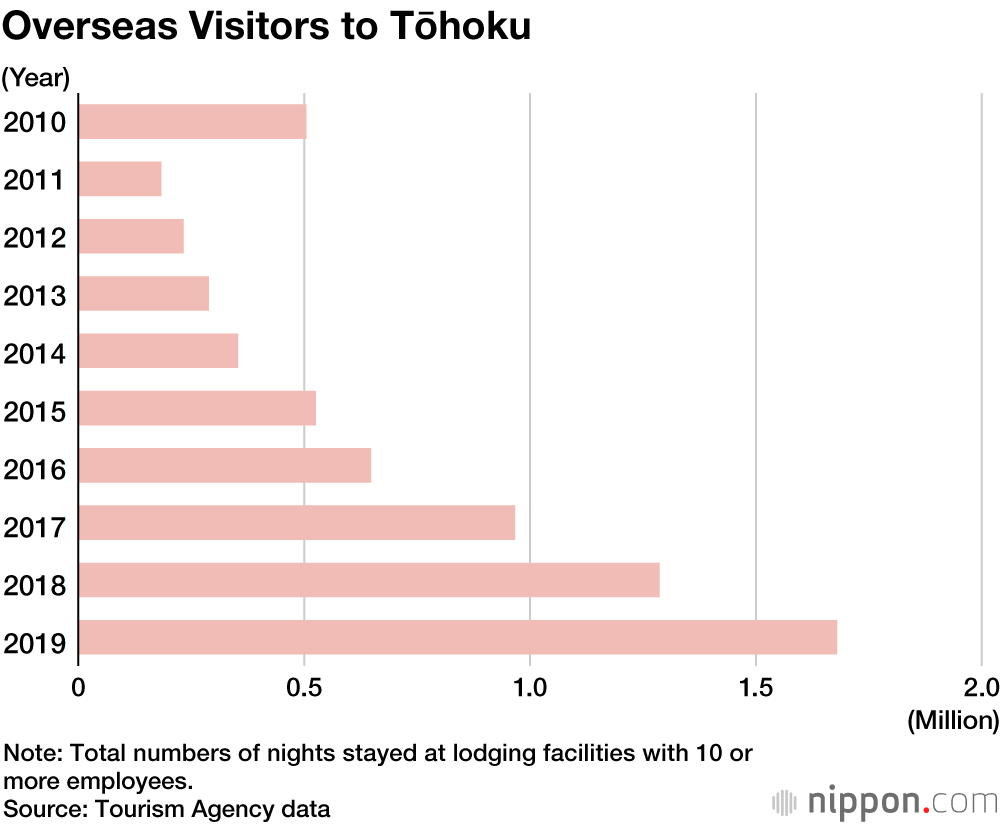 Decontamination operations in communities near the Fukushima Daiichi Nuclear Power Station have steadily progressed. In response, the government has gradually lifted evacuation orders it put in place in all or part of 12 municipalities following the meltdown at the plant, although large portions of the most heavily contaminated areas in seven municipalities remain closed to habitation. Rebuilding of damaged transportation infrastructure has also made headway, giving a boost to communities starting the long road to recovery. Some medical services have restarted and a number of schools have reopened, but on the whole, residents have been slow to come back. As of March 1, 2021, only 1,585 people, or around a tenth of evacuees, have returned. Younger individuals have been particularly reluctant to move back due to factors like having already resumed their lives in communities where they evacuated to and depopulation and meager job opportunities in their hometowns. 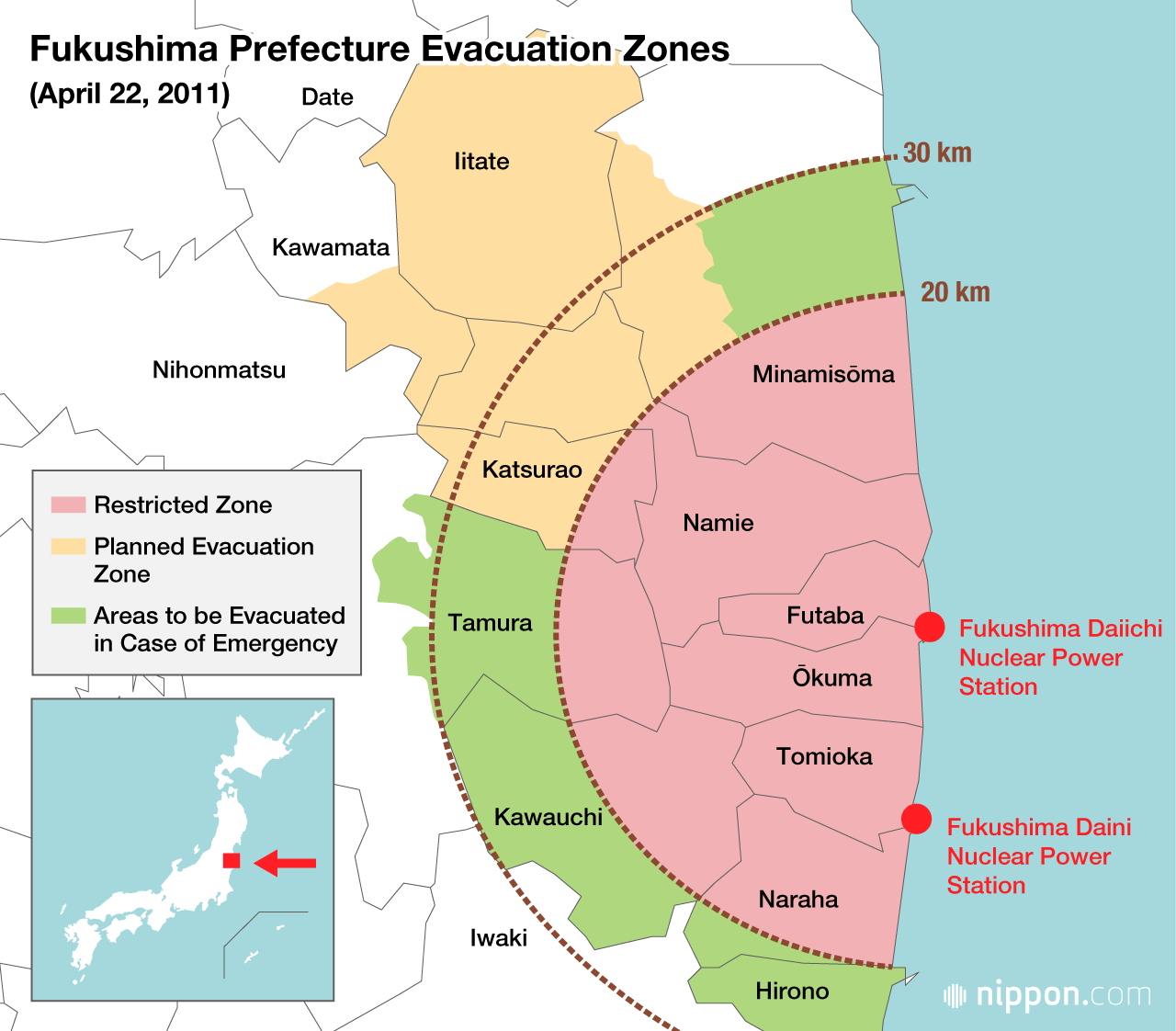 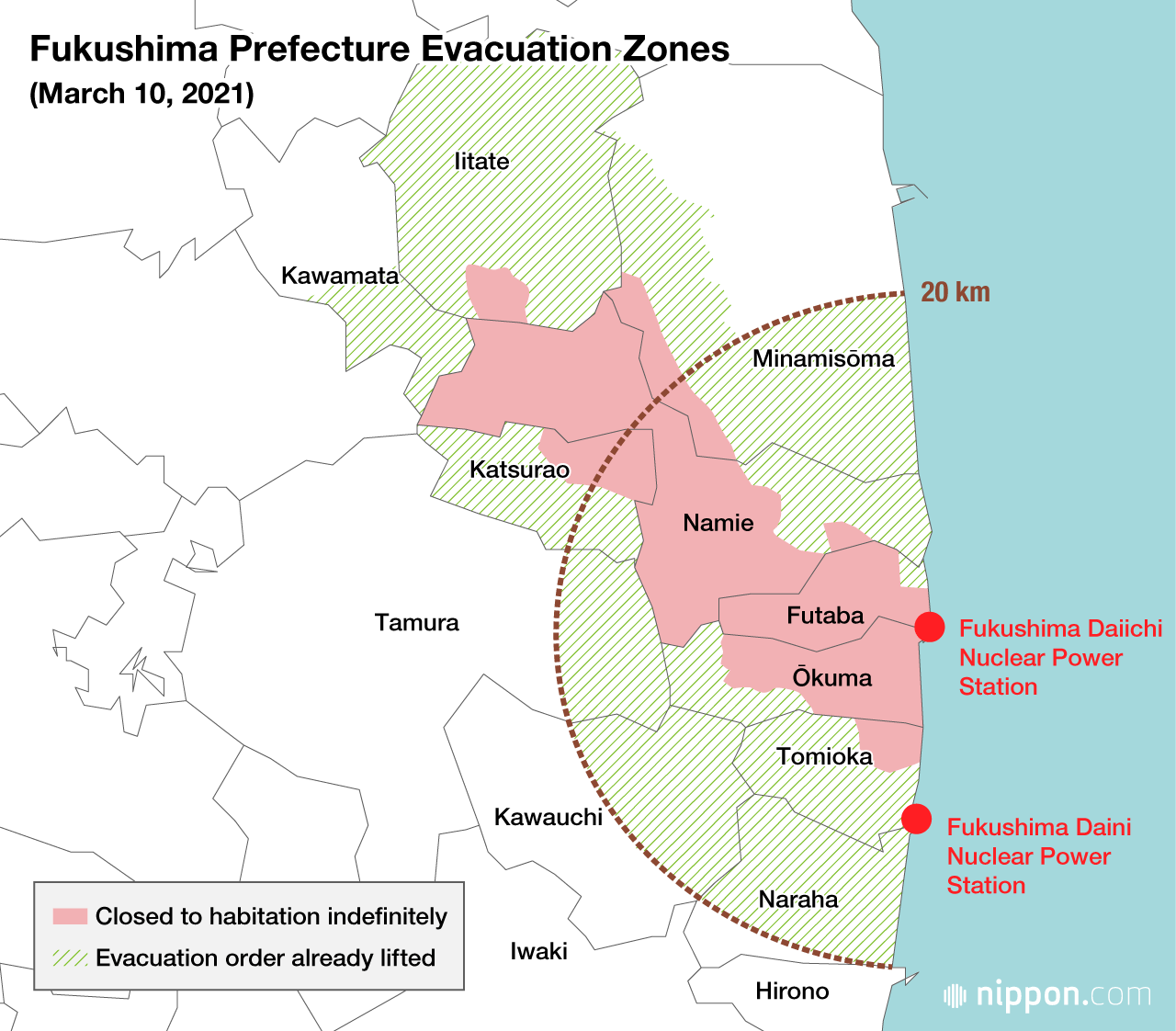 Work to decommission the crippled Fukushima Daiichi reactors has progressed, albeit at a slower pace than initially planned. The original roadmap the government and Tokyo Electric Power Company released in December 2011 set an optimistic 10-year timeline for removing all spent fuel rods from storage pools and fuel debris in the containment vessels of the reactors as part of its goal of completing the decommissioning process by 2051. However, authorities have repeatedly had to postpone work as they tackled new and ongoing issues.

One of the biggest hurdles has been the extremely high radiation levels within the reactors, which have thwarted attempts to investigate the interior of the containment vessels. TEPCO announced in December 2020 that it would begin removing melted fuel debris from Unit 2 in 2021 with the help of a British-made robot arm, but has since said work will not get underway until 2022 at the earliest as it was unable to adequately check the machine due to the COVID-19 pandemic. This and other setbacks have required the roadmap to be revised several times, raising serious questions as to whether the company will be able to complete the decommissioning process as scheduled.

Along with its six reactors at Fukushima Daiichi, TEPCO in July 2019 revealed it will also decommission its remaining four reactors at the Fukushima Daini Nuclear Power Station 12 kilometers to the south.

(Originally published in Japanese. Banner photos: The town of Onagawa, Miyagi Prefecture, on March 22, 2011, soon after the disaster, and on February 12, 2021. A shopping arcade and park space lie before the rebuilt Onagawa Station, with white roof; at top right, housing facilities have been built atop elevated land. Aerial photographs © Kyōdō.)