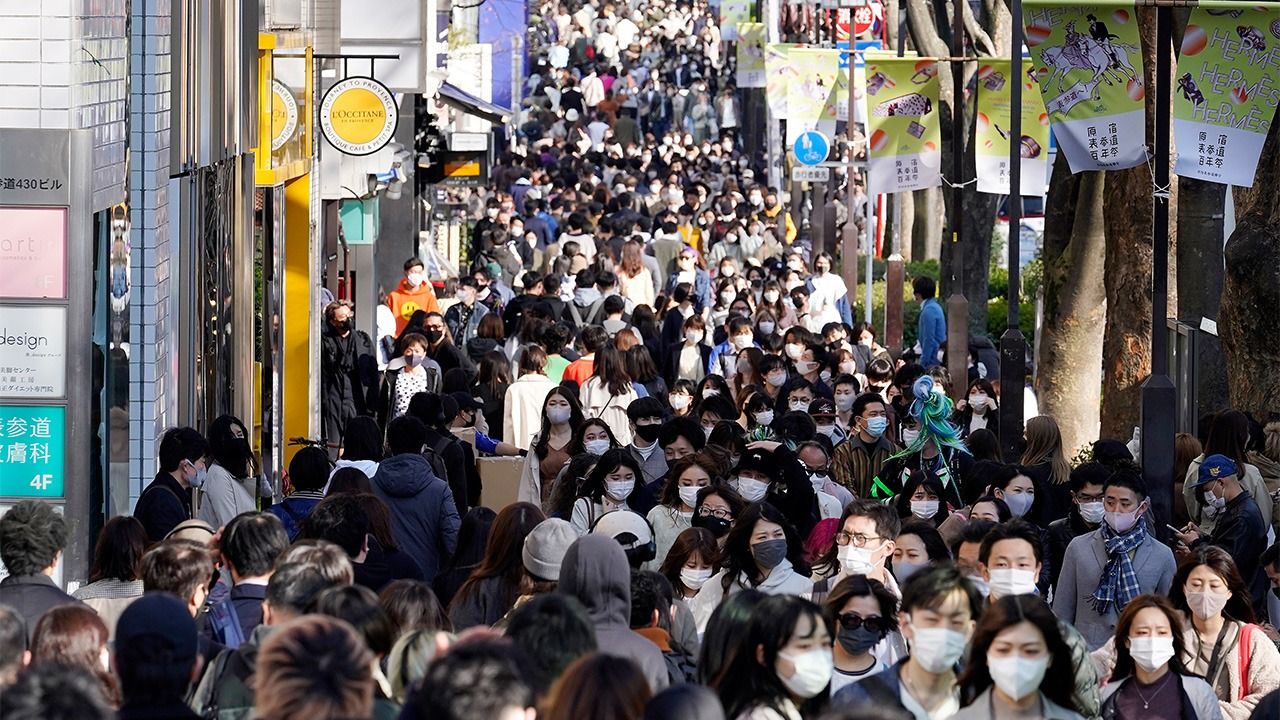 Health Mar 17, 2021
The government expects to end the estate of emergency in Tokyo and neighboring prefectures after a two-week extension even as the number of new COVID-19 cases edge slightly upward in some areas following an earlier decrease.

The Japanese government is considering ending the COVID-19 state of emergency in Tokyo and neighboring prefectures of Chiba, Kanagawa, and Saitama after extending it two weeks from the earlier planned end date of March 7. Hospital bed occupancy rates, based on figures from prefectural authorities, have fallen below 50% in the prefectures and no longer meet the conditions for stage 4, the most serious level on the government’s alert scale and an indicator for when a state of emergency is considered necessary. As of March 15, they are 25.2% in Tokyo, 26.2% in Kanagawa, 37.7% in Chiba, and 37.9% in Saitama.

Average daily totals for the prefectures rose sharply until mid-January before starting to fall. There are fewer new daily cases now compared with when the state of emergency was declared on January 8. However, the decrease in cases has slowed since late February. Looking at weekly totals, there were 4,243 new cases in the week ending March 14, up from 4,108 over the previous seven days. While the number of cases fell in Kanagawa and Chiba, they rose in Tokyo and Saitama.

Kanagawa Governor Kuroiwa Yūji pointed to the figures in calling for an end to the state of emergency, saying the prefecture met the criteria for doing so. In contrast, Saitama Governor Ōno Motohiro said it was not yet time to ask for it be lifted. However, the government appears set to go ahead with its original plan of ending the state of emergency on March 21. 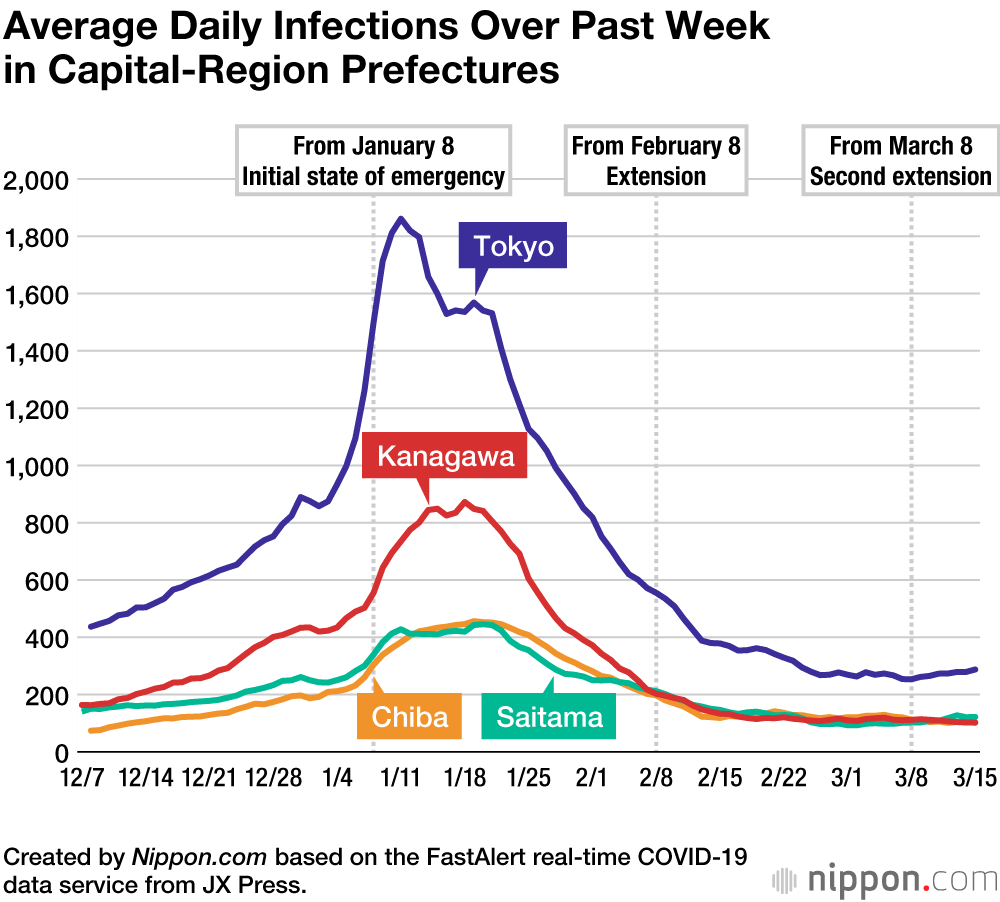 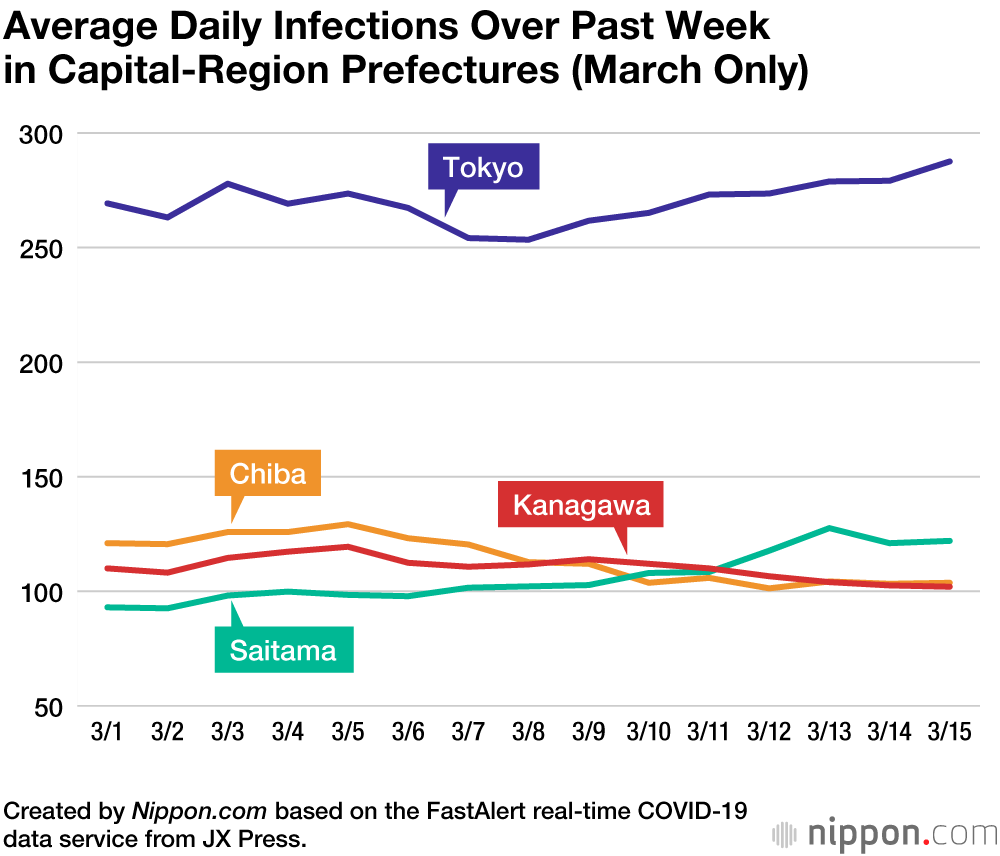 (Originally published in Japanese. Banner photo: Despite the state of emergency, Omotesandō in central Tokyo is crowded on Sunday, March 14. © Jiji.)