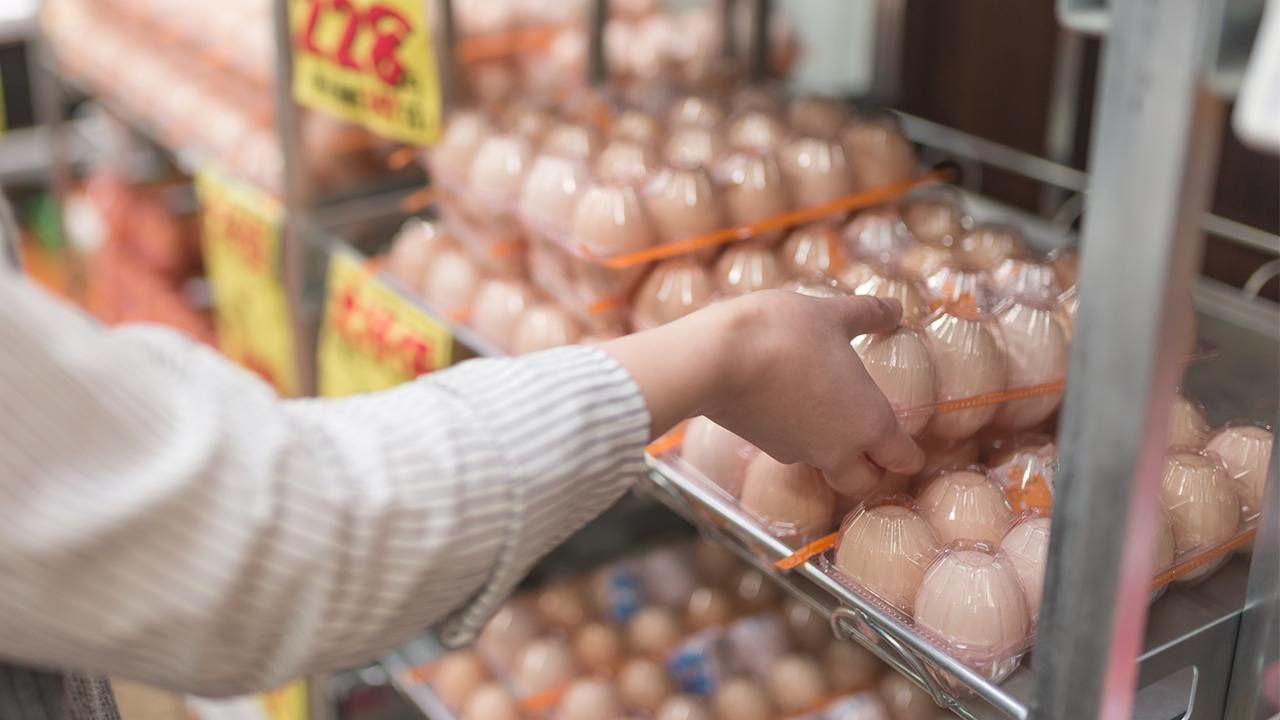 Lifestyle Food and Drink Economy May 19, 2021
Boiled, fried, or raw, eggs have joined traditional fare as a staple of the Japanese diet over the last fifty years. The affection is partially attributable to stable prices all year round.

Eggs by the Hundreds

No matter how you crack it, Japanese eat a lot of eggs. According to the Ministry of Agriculture, Forestry, and Fisheries, 17.5 kilograms of eggs per person were consumed in 2019, either directly or in other foods like bread, noodles, and side dishes. Considering that a medium-size egg weighs approximately 60 grams, this equates to a whopping 292 eggs a year per person. Since 1950, when on average Japanese ate just 105 eggs annually, there has been a 2.8-fold increase in consumption. 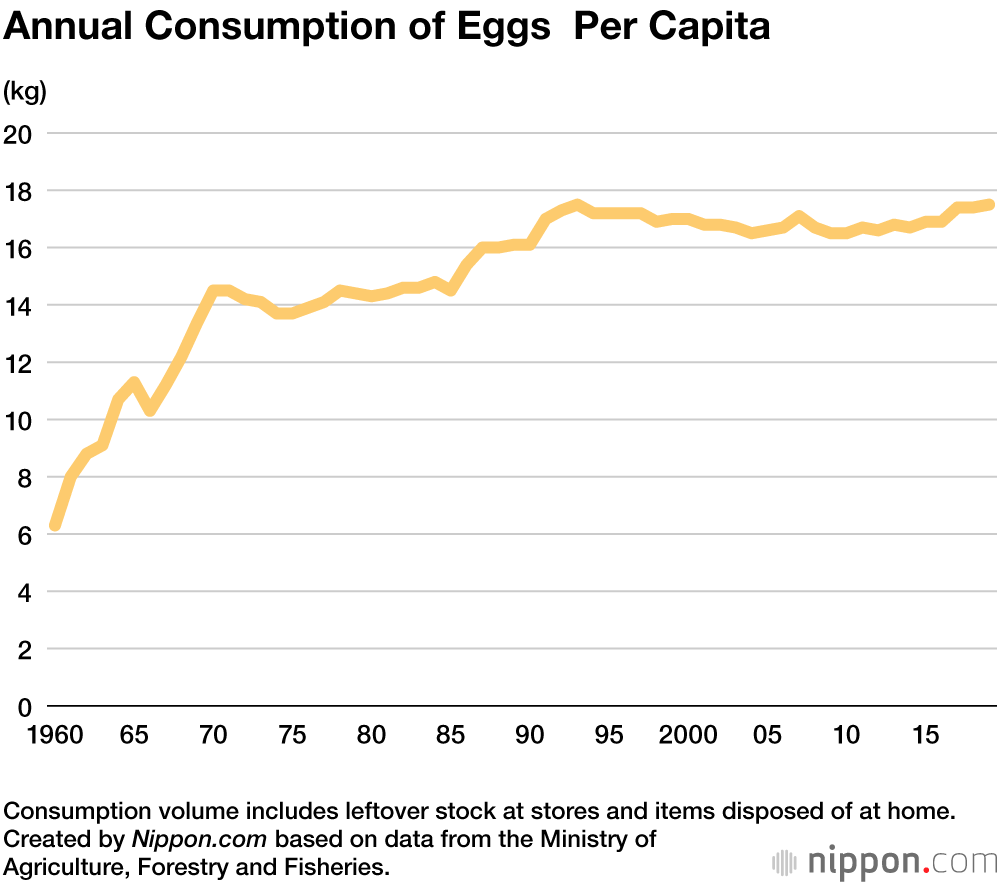 Affordability is a major reason for Japan’s high egg consumption. While prices for other fresh foods like fruit and vegetables can fluctuate widely due to weather and other uncontrollable factors, the price of eggs remains relatively stable year round. A standard pack of ten eggs typically goes for less than ¥200, and some supermarkets offer special sale prices as low as ¥100.

A comparison of the prices for eggs and other food products over the last five decades shows that to 2020, food prices across the board are 3.5 times higher than they were in 1970, the base year of the study. In contrast, the price for eggs increased only 1.6-fold during the same period, attesting to the success of measures by producers to keep prices stable. 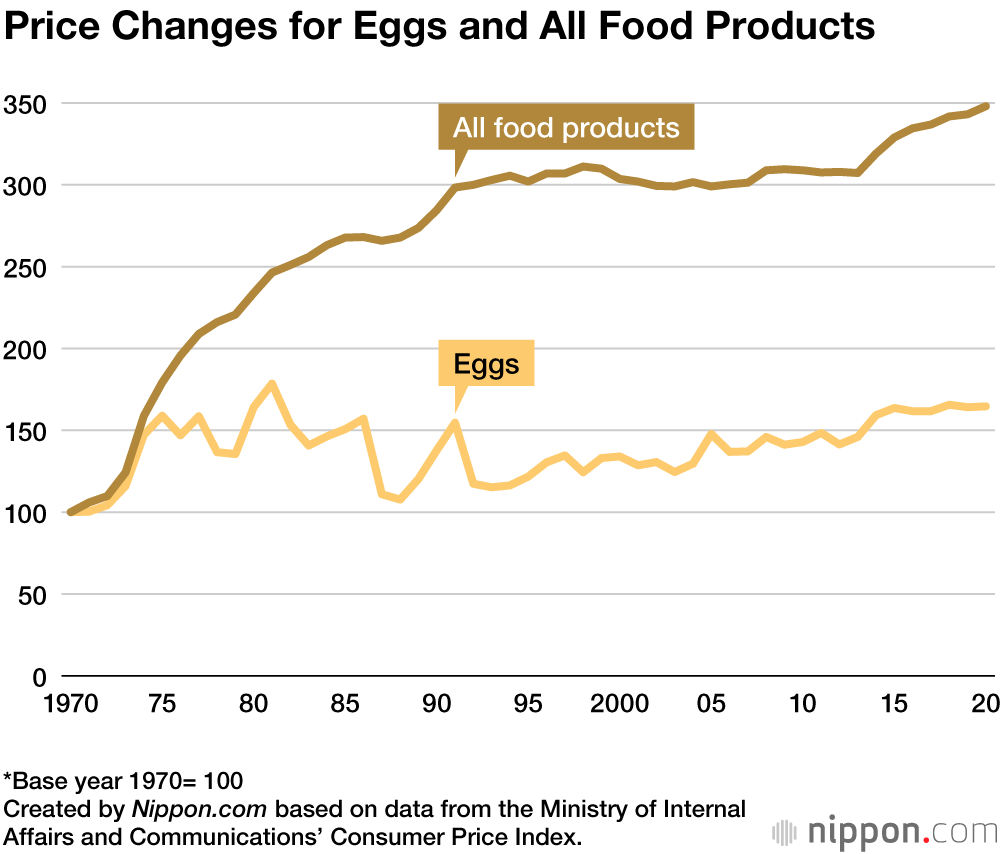 Chickens typically lay fewer eggs in mid-winter and mid-summer, causing production to drop during these times. However, output rebounds in spring and fall. Consumption is also seasonal, with demand highest in winter when eggs are used in warming dishes like oden and sukiyaki as well as to make Christmas cakes, a popular holiday treat. Demand subsequently tapers off in the summer months when the mercury rises. Despite these fluctuations, store prices remain stable year round, to the benefit of consumers.

The wholesale price of eggs, on the other hand, does fluctuate seasonally. The price is lower in the summer when production and demand is sluggish, but begins to rise in the fall as consumers’ appetites for seasonal food items grow. Demand peaks in December with Christmas confections and osechi, traditional New Year cuisine, leading the charge. Wholesale prices then usually dip in January in reaction to early trading ahead of the extended year-end business holidays.

To counter the price shifts, poultry farms reduce the number of hens that are laying when prices are low and increase production as prices rise, adjusting the shipment volume pursuant with the change in price. The number of hens at farms has remained relatively stable over time, with 124 million laying hens in 1979 compared to 142 million in 2019.

However, factors such as lack of successors and the steep rise in feed prices have forced a large number of poultry farmers out of business. In 1973, there were 247,100 farms. By 2019, though, this number had dropped dramatically to 2,120 farms. In 1979, each farm raised on average 501 laying hens, while twenty years on in 1999, this had risen to 28,200 hens per farm. A further twenty years later in 2019, this had sharply increased again to an average 66,900 hens. Only farms that can handle large-scale business, switching to hens that lay large volumes of eggs while reducing production and distribution costs and building less labor-intensive poultry houses, are managing to survive.

This has made it difficult for producers to remain profitable. According to the Ministry of Agriculture, Forestry and Fisheries, of the 13 agricultural businesses, including rice farming, dryland farming, and fruit growing, only poultry farming fell into the red in 2019, highlighting the severe business circumstances these farms face. 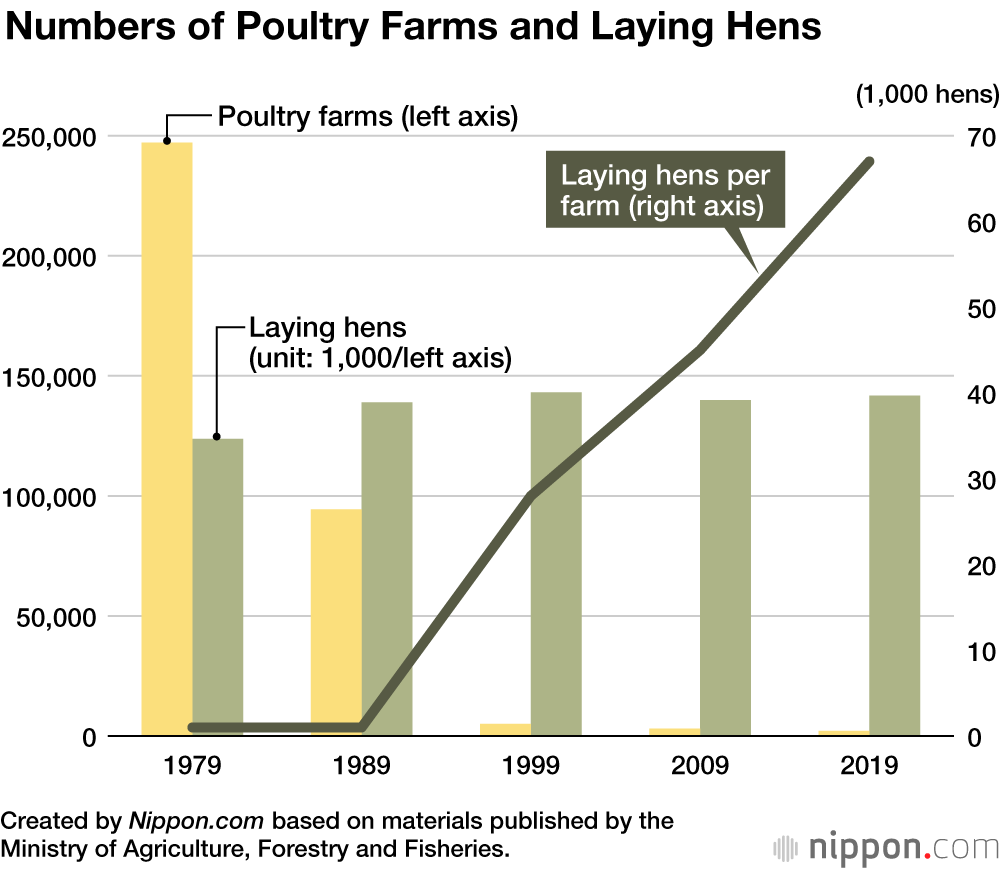 In 2020, the COVID-19 pandemic kept more people at home, driving up household consumption of eggs significantly. As a result, the price for eggs in April was considerably higher than for the same time the previous year. However, with the declaration of the state of emergency came a dramatic drop in demand for eggs for business and processing purposes, causing the price fall in May. As the trade price fell below the standard of ¥161 per kilogram, the Japan Poultry Association began adjusting production to stabilize the price.

An ongoing outbreak of avian influenza at farms in 2020 has limited supply, causing the price of eggs in April 2021 to soar to its highest level in five years.

Although Japan has an overall food self-sufficiency rate of just 38%, in the case of domestically produced eggs it stands at 96%. Strict management of production and hygiene will ensure that consumers can continue to enjoy eggs in all their forms for years more to come. 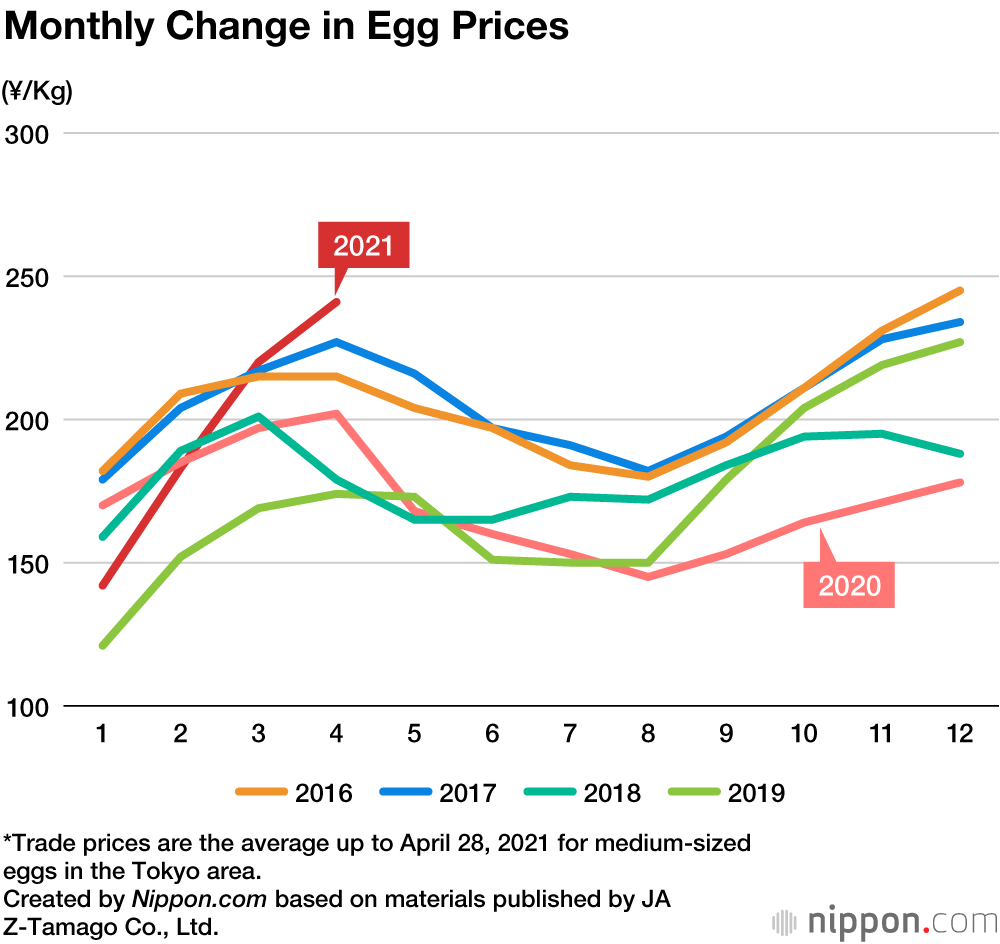