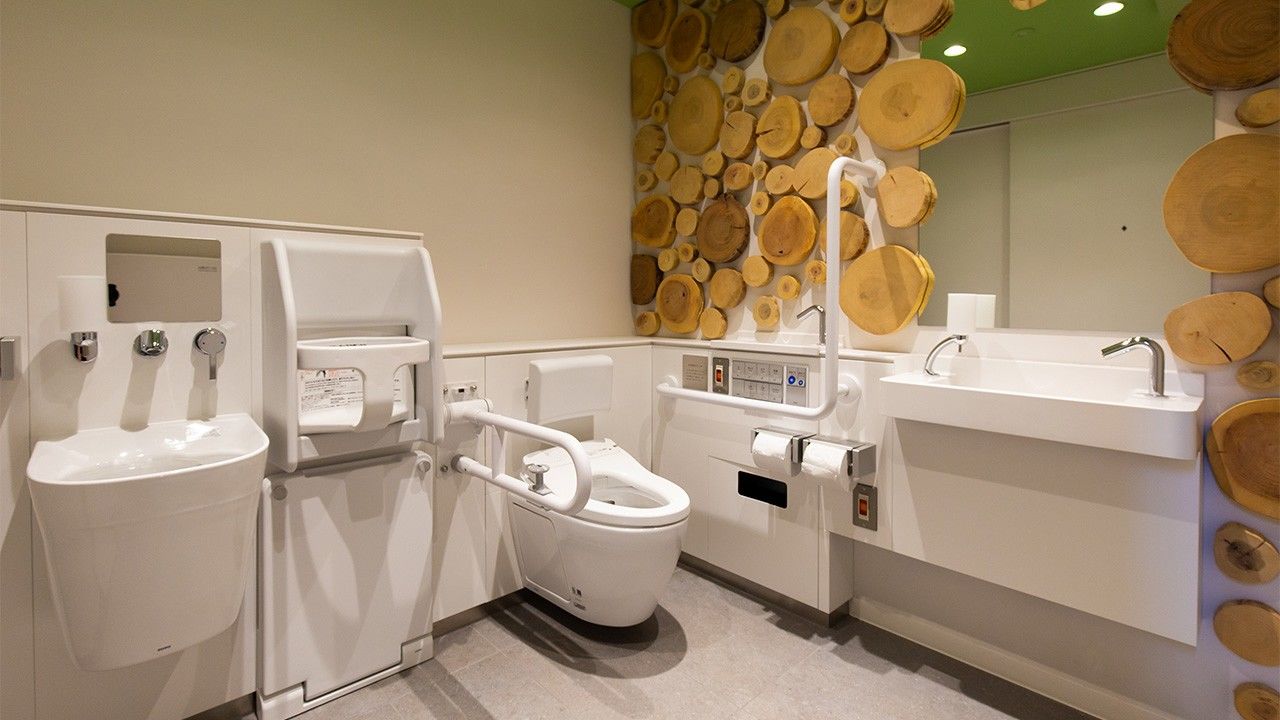 An Initiative to Improve Public Restrooms’ Image in Japan

Guide to Japan Society Culture Art Jul 13, 2021
A survey by the Nippon Foundation found that public restrooms in parks and along streets are often seen as dirty and sometimes dangerous.

A toilet is a regular necessity. A survey of 1,000 teenagers aged 17 to 19 conducted by the Nippon Foundation in May found that around 70% of the respondents said that they “often” or “sometimes” use a public restroom when they go out. 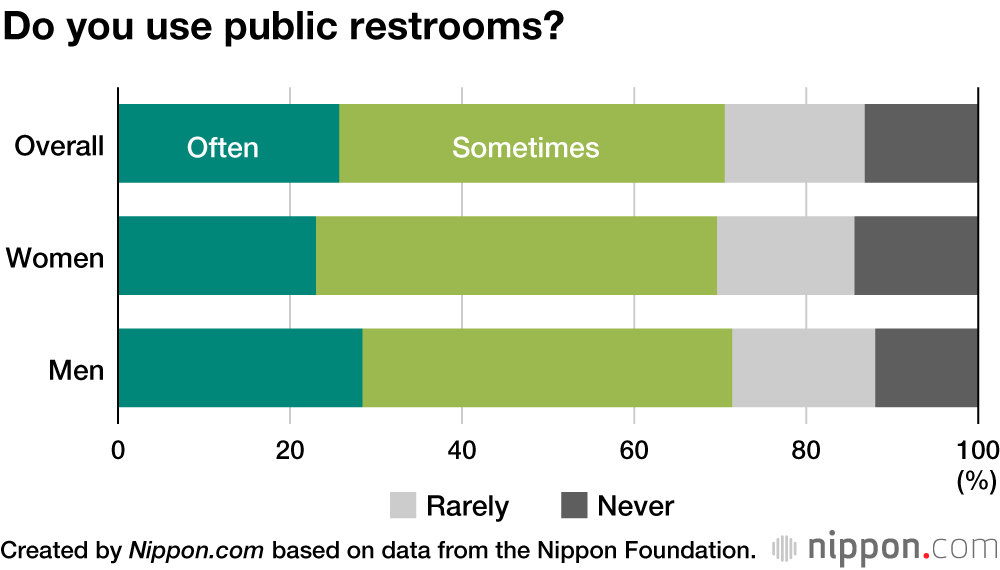 The answers to the survey question about what locations for public restrooms are most frequently used found that toilets in commercial facilities, such as department stores or movie theaters, were used most often, at 57.1%, while the toilets located in parks or along streets were the least frequently used, at 13.5%. 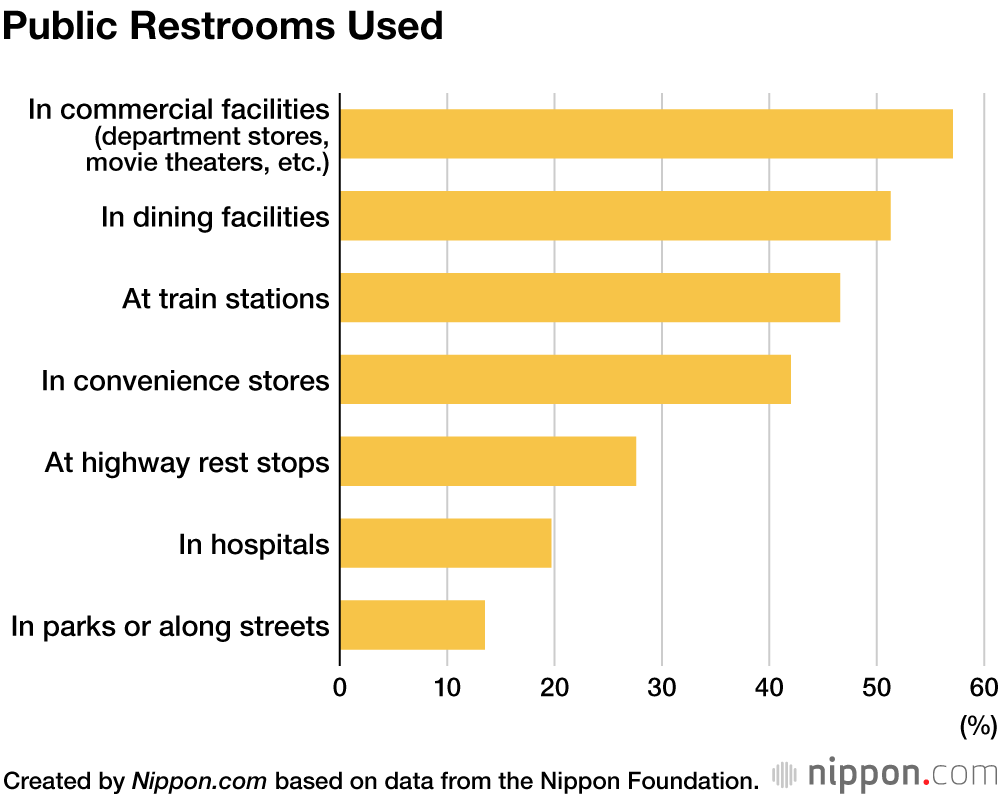 As for the impression survey respondents had of public restrooms according to location, toilets in commercial facilities were described as “clean” by 65%, “safe” by 24.3%, and “bright” by 26.3%, so that the experience was overwhelmingly positive. In contrast, toilets in public parks or along streets were described as “dirty” by 67.6%, “dangerous” by 22.8%, “dark” by 23.4%, and “smelly” by 28.6%, so that the impression was very negative, making people reluctant to use them. 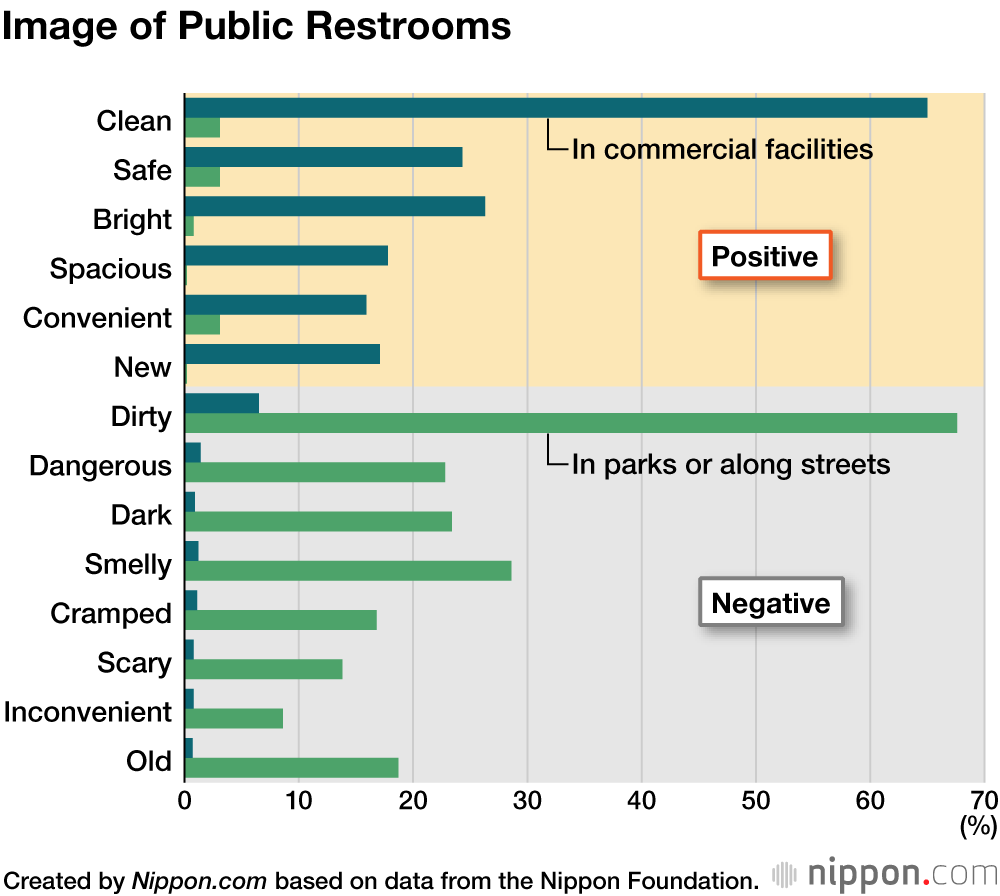 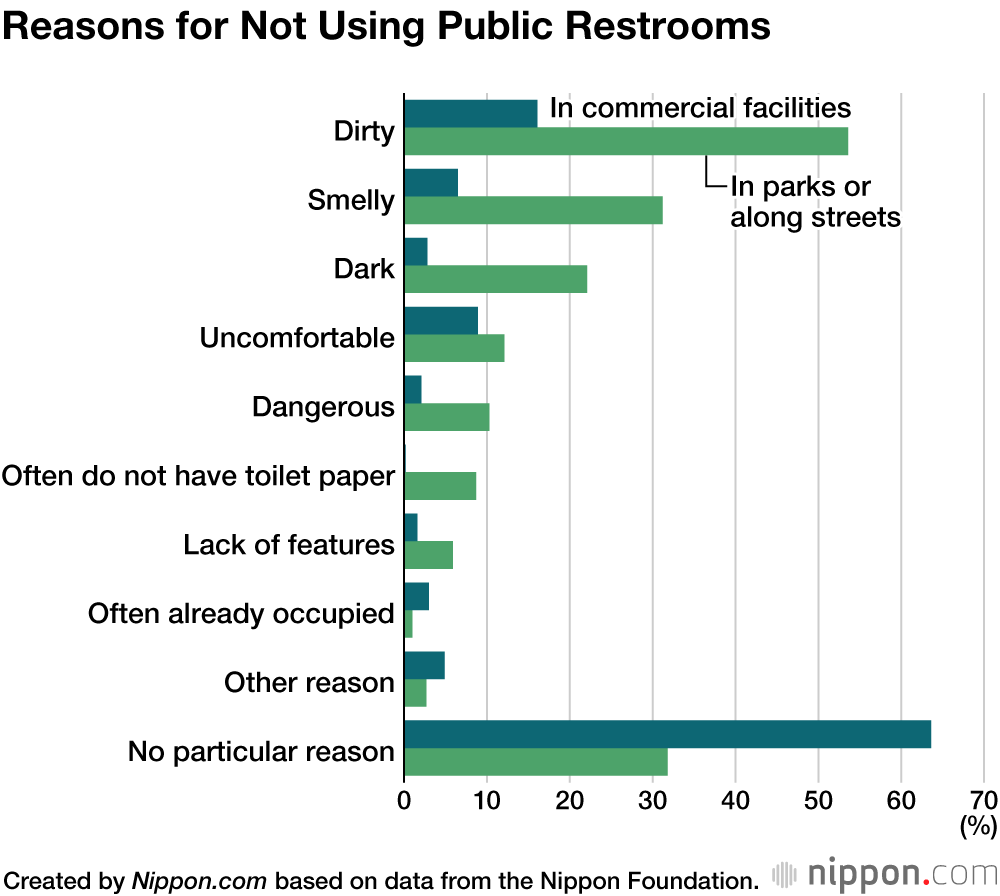 The Nippon Foundation is promoting the Tokyo Toilet Project to install public restrooms in 17 locations in the city that anyone can use, regardless of gender, age, or disability, based on the belief that toilets are a symbol of Japan’s world-renowned culture of hospitality. The project involves 16 world-class architects and one designer, who each designed one of the public restrooms. The aim is to create unique, playful, and clean public restrooms that anyone would be happy to use.

In June 2021, the ninth public restroom in the project, designed by the architect Kuma Kengo, was installed in Nabeshima Shōtō Park in Shibuya. For this restroom located in a lush green park, the toilets are divided into five separate structures that resemble a small village. (This article’s banner photo shows one of the toilets in the park.) 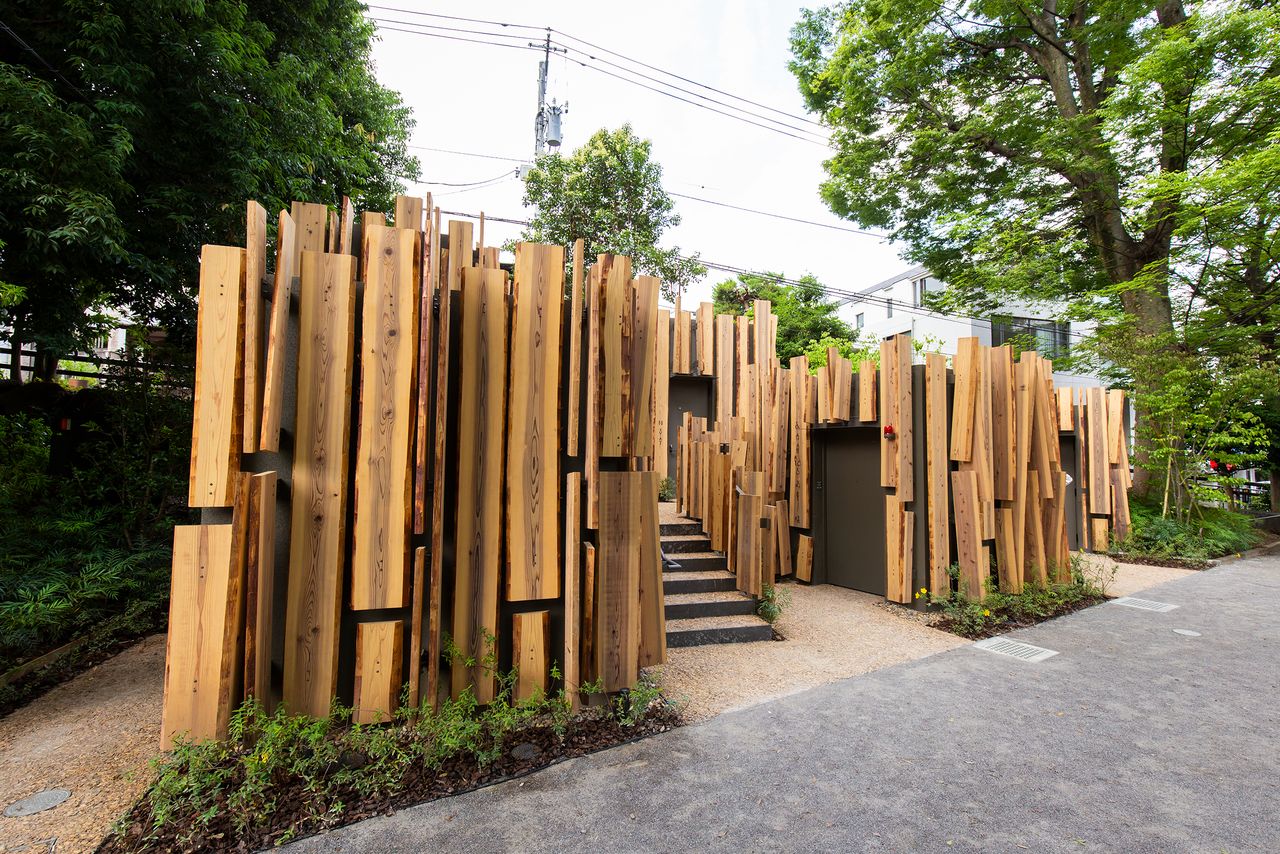 The Mori no Komichi restroom designed by Kuma Kengo. Each of the five structures has a different function, such as one that is wheelchair accessible, one designed for children, and one for changing clothes.

In response to the survey question about what should be done to keep public restrooms clean, 54.5% said that it was important for users to be aware that they are public property and use them neatly, while 42.3% said the facilities should be cleaned more often and 39.3% said that the restrooms should be made more stylish so that people will want to avoid getting them dirty. 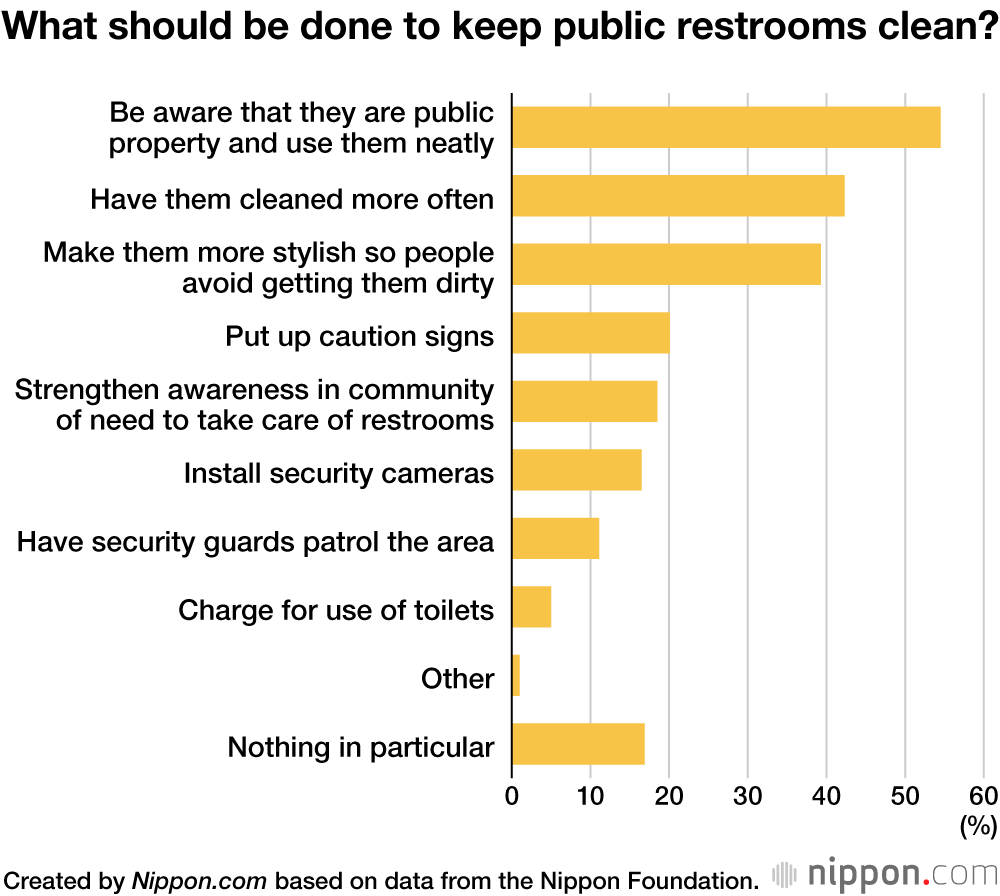 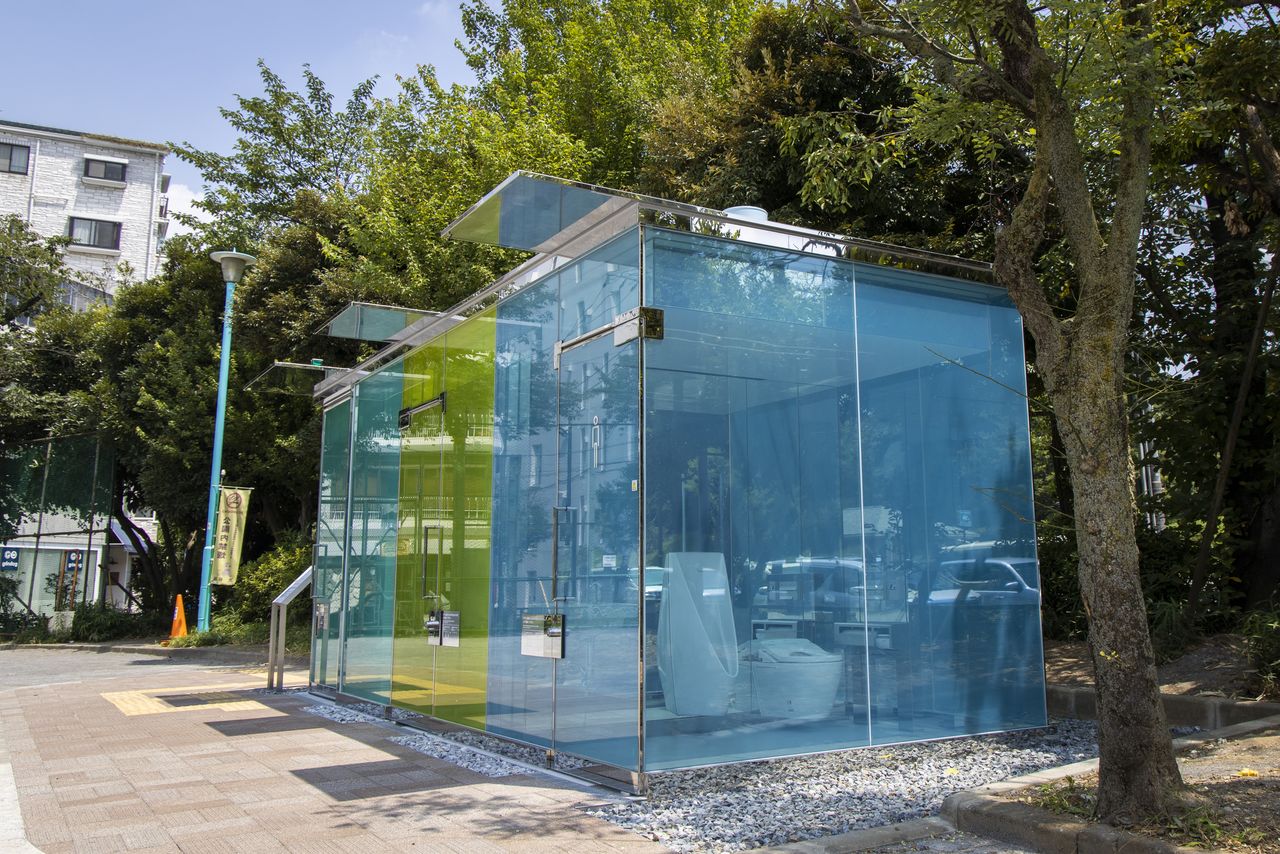 The much-talked-about Transparent Toilet in the Haru-no-Ogawa Community Park, Shibuya, designed by the architect Ban Shigeru.

(Translated from Japanese. Banner photo: A toilet designed by the architect Kuma Kengo, in Nabeshima Shōtō Park in Shibuya. © Nippon.com.)