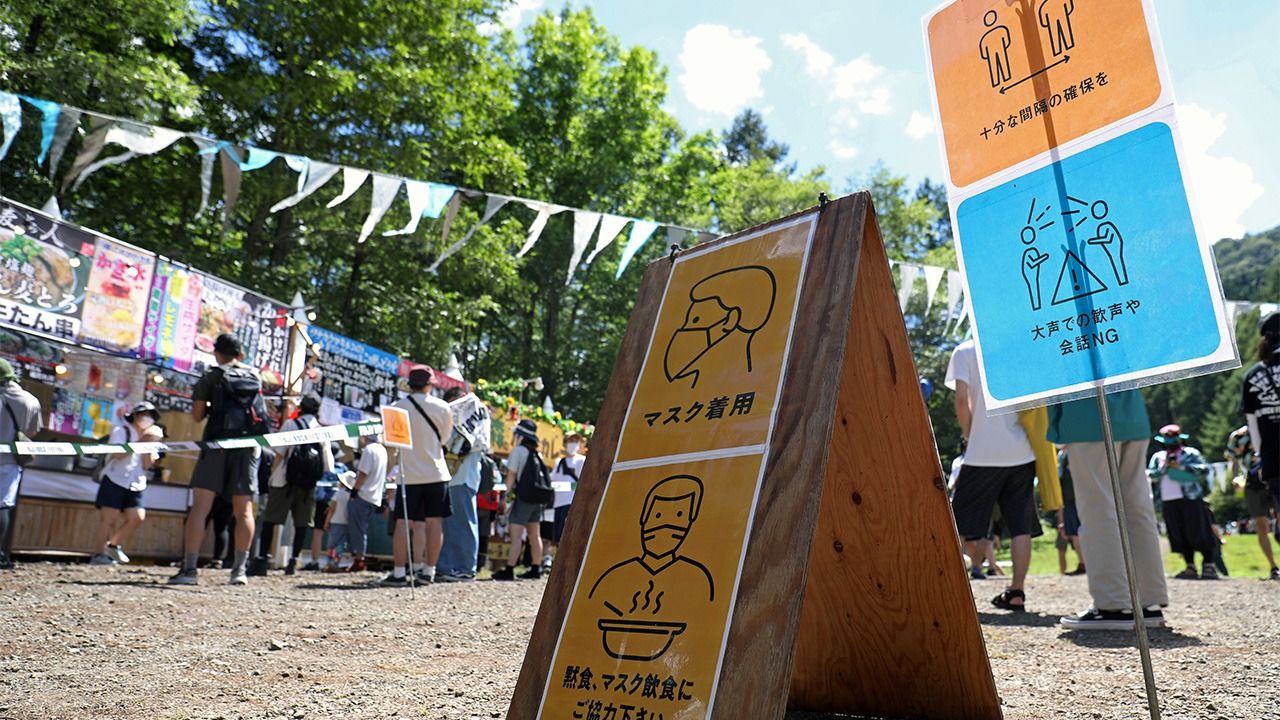 Health Lifestyle Society Oct 6, 2021
A survey by the Tokyo Metropolitan Government found that social gatherings and not wearing masks were apparently connected to COVID-19 in many cases.

The fifth wave of the COVID-19 pandemic, the worst thus far, hit Japan in July and August. A survey conducted by the Tokyo Metropolitan Government monitoring meeting found that one in three people testing positive for the virus had been either eating and drinking with others or talking to someone not from their household without wearing a mask in the two weeks prior to infection.

The survey was conducted between July 1 and August 31 for COVID-19 patients undergoing treatment at overnight facilities or at home. The 11,726 survey respondents were men and women under 60. The results showed that the spread of infection was more prevalent in age groups where vaccinations began later.

According to the survey, 32.7% of respondents had been engaged in a social gathering involving alcohol, had been eating and drinking in a large group or with others over an extended period of time, or had been talking to someone outside their household without wearing a mask during the two weeks directly prior to the onset of symptoms (or the date of the PCR test for asymptomatic patients). The remaining patients, who accounted for nearly 70% of the total, were not aware of engaging in any such actions and had followed preventative measures. Despite that, many of the new positive cases resulted from close contact with people in the same household, according to a Tokyo Metropolitan official, so that they were apparently unable to avoid becoming infected at home. 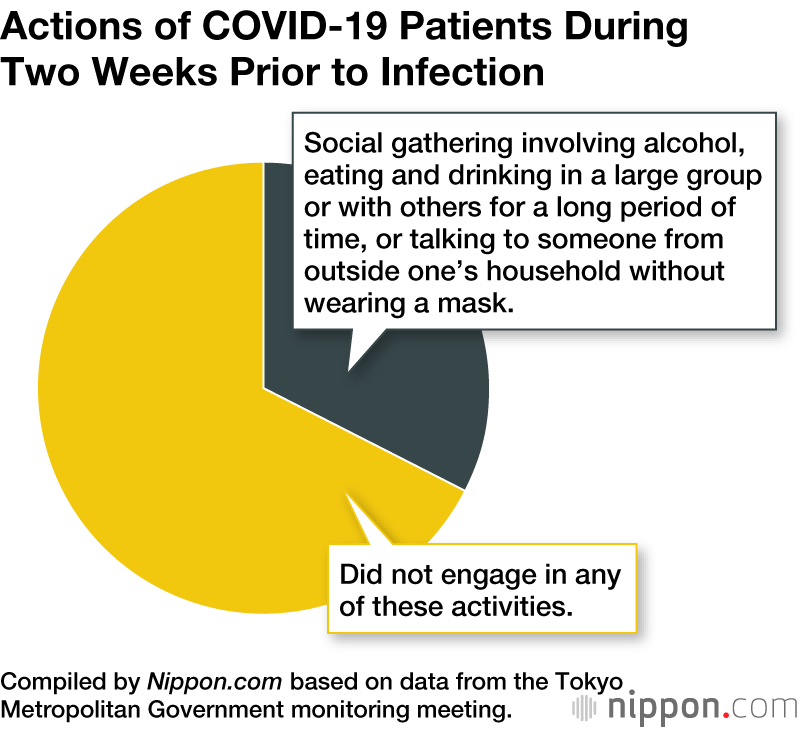 Many of those who were eating or drinking with others were in their twenties and thirties. Although almost all of the patients surveyed were in the habit of wearing a mask, one in four had conversed with someone from outside their household without wearing a mask, showing that they might have been infected through letting down their guard for a moment. 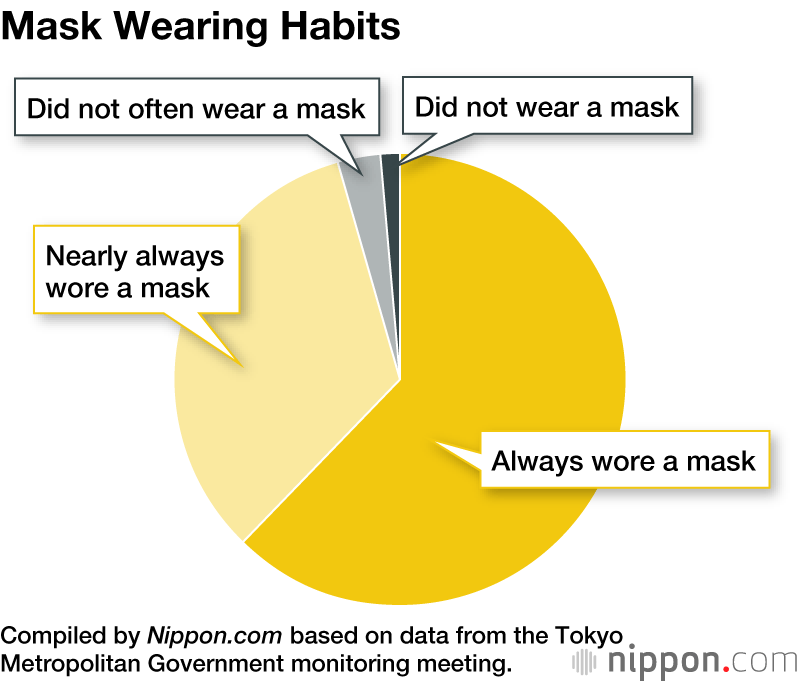 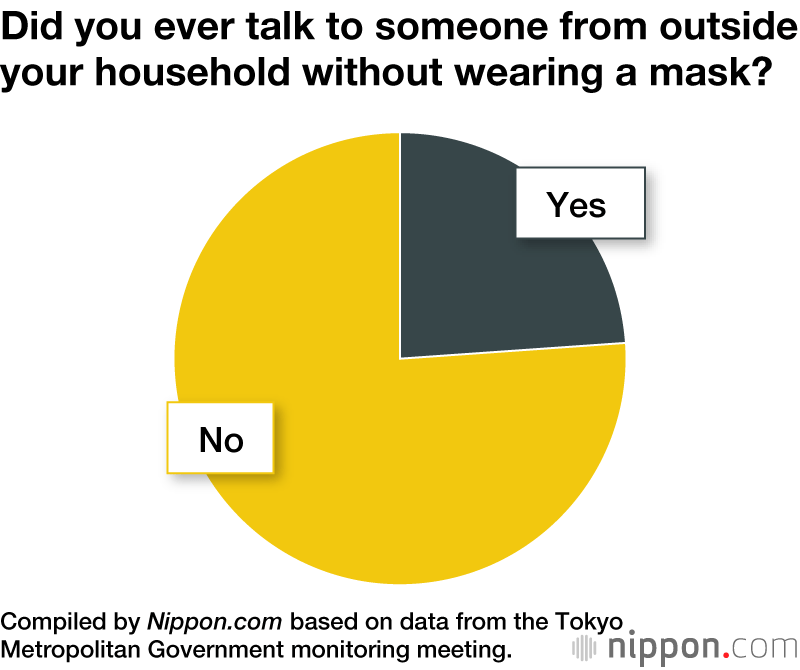 The most common symptoms were fever, headache, fatigue, and coughing, all of which were reported by the majority of respondents.

In Tokyo, the number of newly infected people began to increase in July, and on July 8, the fourth emergency declaration was issued. Infections increased sharply in August, with the number of newly infected people reaching a record high of 5,773 on August 13. In addition to the many in hospital beds at medical institutions, others had to recuperate at home due to the lack of access to overnight treatment facilities. This led to a number of patients dying at home.