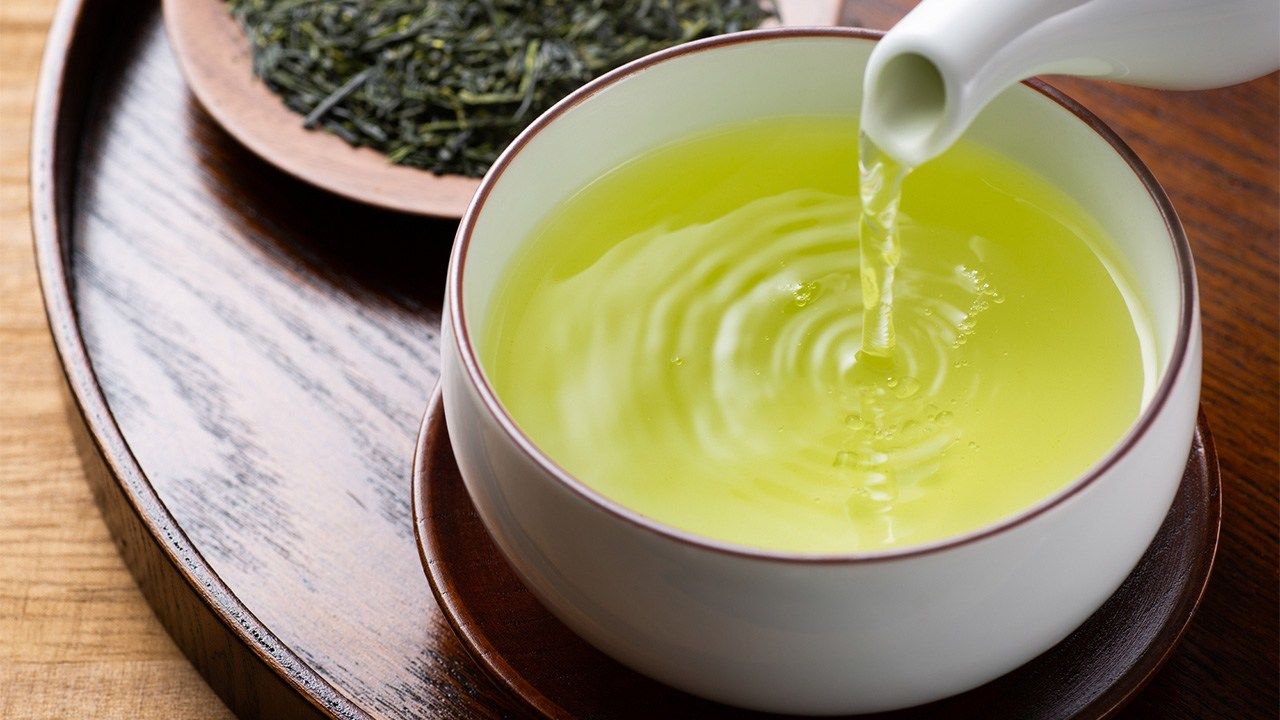 Economy Lifestyle May 16, 2022
While domestic production in Japan may be slowly declining, green tea is enjoying a lot of popularity overseas and in 2021 exports were at their highest yet.

Domestic Production is on the Decline

The cultivation area for green tea in Japan continues to see a gradual decline and dropped to 38,000 hectares in 2021. In 2020, it was predicted that the COVID-19 pandemic would lead to less demand, so production was significantly reduced to around 70,000 tons. From 2009 onward though, up until last year production remained around 80,000 tons. 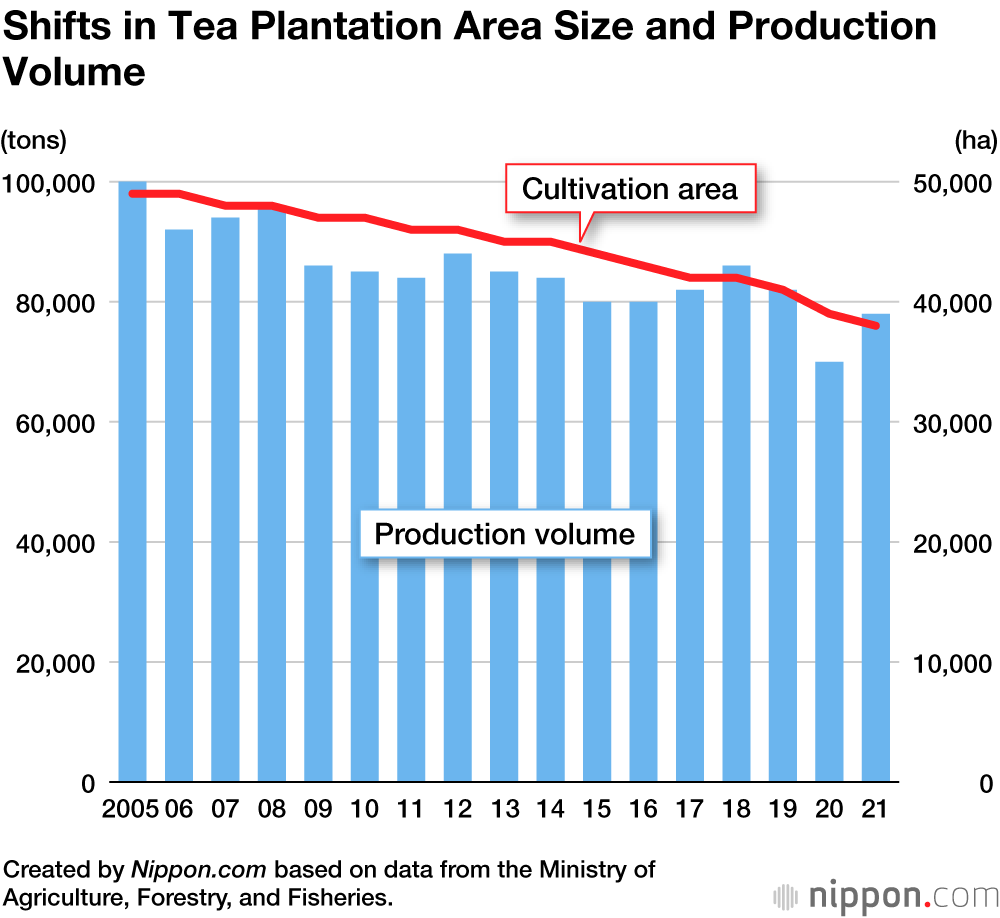 Shizuoka, Kagoshima, and Mie are Top Prefectures for Production

The main green tea production prefectures are Shizuoka, Kagoshima, and Mie, with Kyoto and Fukuoka close behind. The top three prefectures account for 70% of the total cultivation area for green tea in Japan. Each area boasts its own unique production process. In Shizuoka and Kagoshima, producers make sencha, where the new leaf tips are steamed, and then rolled, massaged, and dried. In Mie and Fukuoka, the tea plants are covered with straw or lawn cloth for about one week before harvesting and then processed in the same way as for sencha to create kabusecha (literally “shaded tea”). In Kyoto, producers make matcha and gyokuro (literally “jade dew”), which is processed the same way as sencha, but the covering period is longer at around 20 days and they use elevated shelving, so that the straw or lawn cloth forms a canopy over the plants. 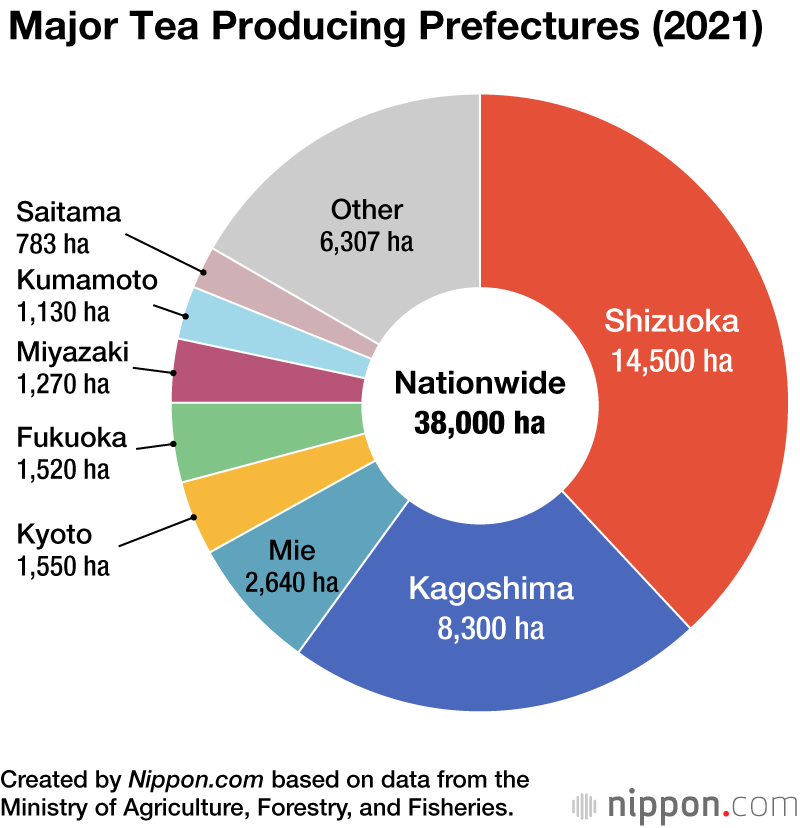 Production may be shrinking in Japan, but the taste for green tea overseas is going from strength to strength. In 2021, the export value was ¥20.4 billion, up 26.1% from the previous year, and marked a record high for the second year running. It is thought that exports were boosted due to growing demand as the economy gradually started to recover, both from people staying at home and among those eating out. 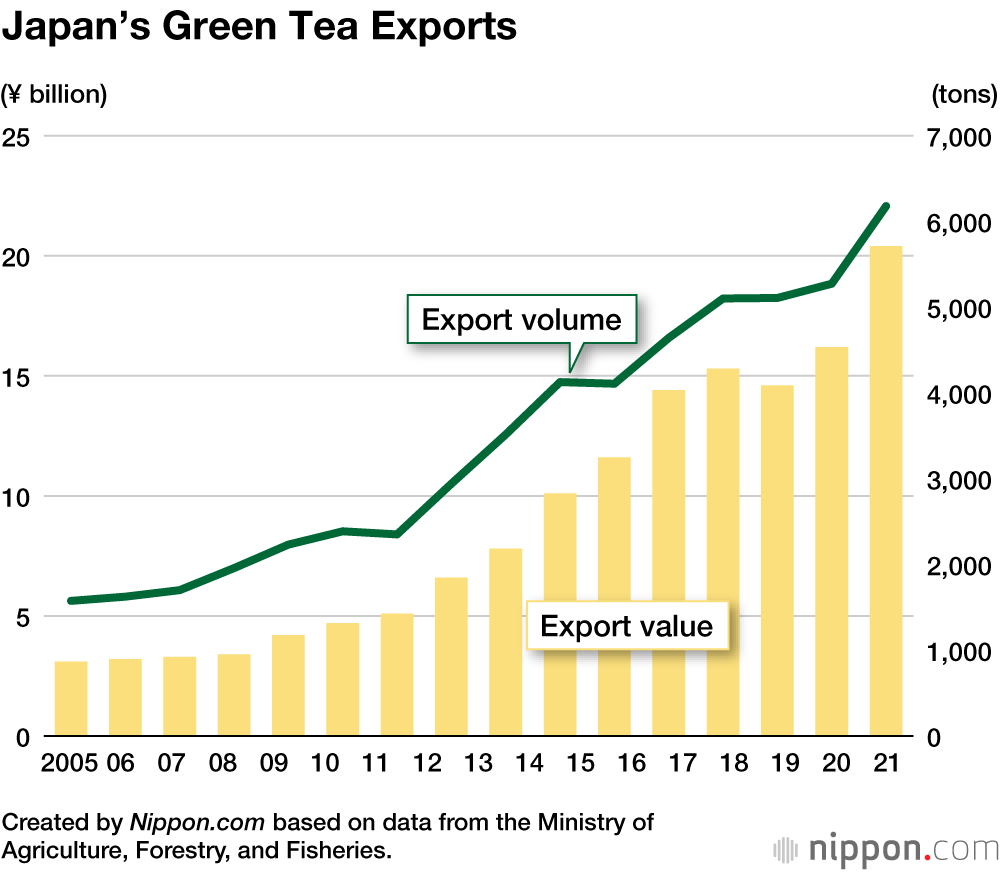 Among US exports, powdered green tea, including matcha, accounted for 75% of the total export value, while the EU and Taiwan had more exports of other types of green tea, including loose leaf. Differences were seen between countries and regions, but the figures overall confirmed the continuing overseas love for matcha, whether drunk in lattes or eaten in sweets. It comes at a price though. The export unit price per kilogram for powdered green tea was ¥4,411, nearly double the price of other types of green tea, which cost ¥2,244 per kilogram.

Created by Nippon.com based on data from the Ministry of Finance’s Trade Statistics of Japan.