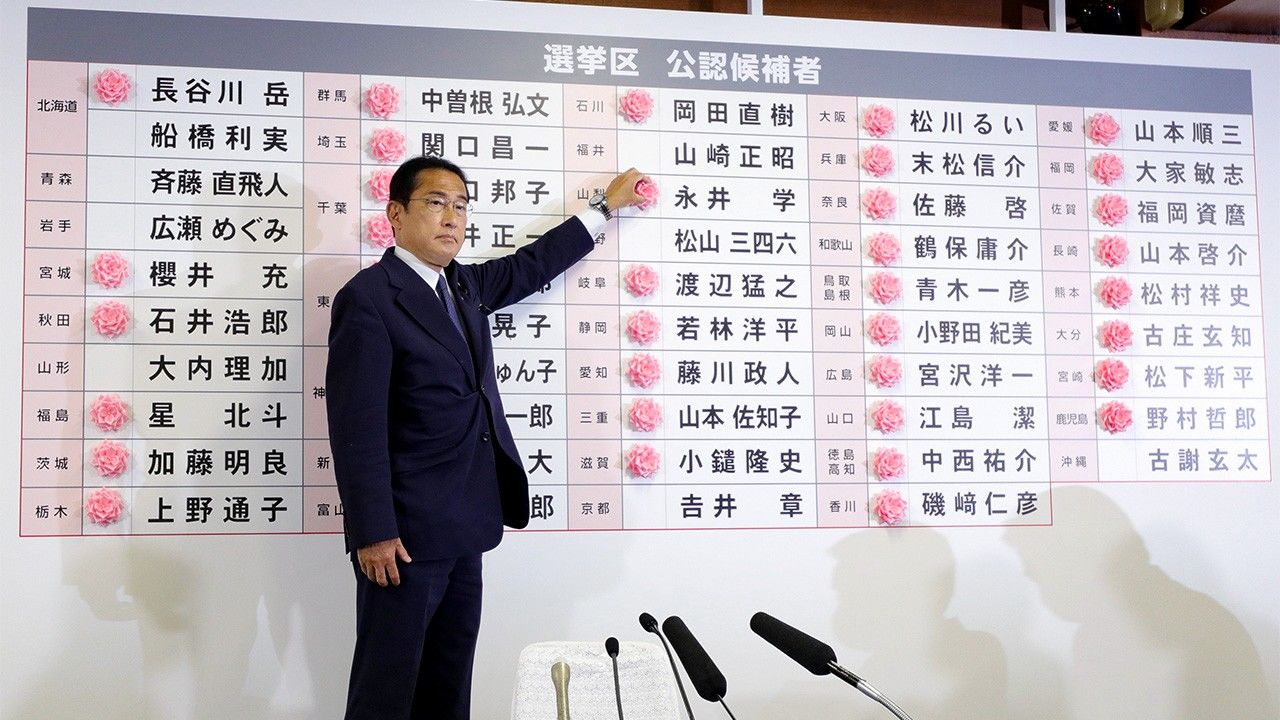 Politics Jul 11, 2022
The July 2022 House of Councillors election saw the ruling Liberal Democratic Party win 63 of the 125 contested seats, handing its ruling coalition with Kōmeitō a comfortable majority. Gains by other parties in favor of constitutional revision have given these forces a two-thirds majority in Japan’s upper house.

On July 10, 2022, 125 seats, just over half of those in the 248-seat House of Councillors, went up for election. The ruling Liberal Democratic Party won 63, more than half of these, on its own; along with the junior partner Kōmeitō’s 13, the ruling coalition took 76 of the seats up for grabs, leaving it with a comfortable majority in the Diet’s upper house. Among other parties, Nippon Ishin no Kai (the Japan Innovation Party) advanced in the chamber, doubling its count to win 12 seats in all, even outstripping the Constitutional Democratic Party of Japan—the leading opposition party—in the proportional representation voting. Reiwa Shinsengumi, another opposition party, took three seats in the vote.

The election was broadly viewed as a referendum on the leadership of the LDP’s Prime Minister Kishida Fumio, who took office in October last year. He now enjoys a span of some three years with no required national elections, giving him time to shore up the stability of his administration.

Note: Total includes one vacant Kanagawa Prefecture seat not officially up for election this year.

Voter turnout was 52.05%, including ballots cast before election day, a rise from the 48.80% marked in the previous 2019 upper house contest.

Attention has focused on the wins by parties nominally in favor of constitutional revision. Adding successful Ishin and DPP candidates to those from the ruling coalition, the total number of House of Councillors members who view revising the basic law in a favorable light (including those not up for reelection this year) has risen to 177, comfortably clearing the two-thirds mark of 166 house members whose approval would be required to advance any such proposal. 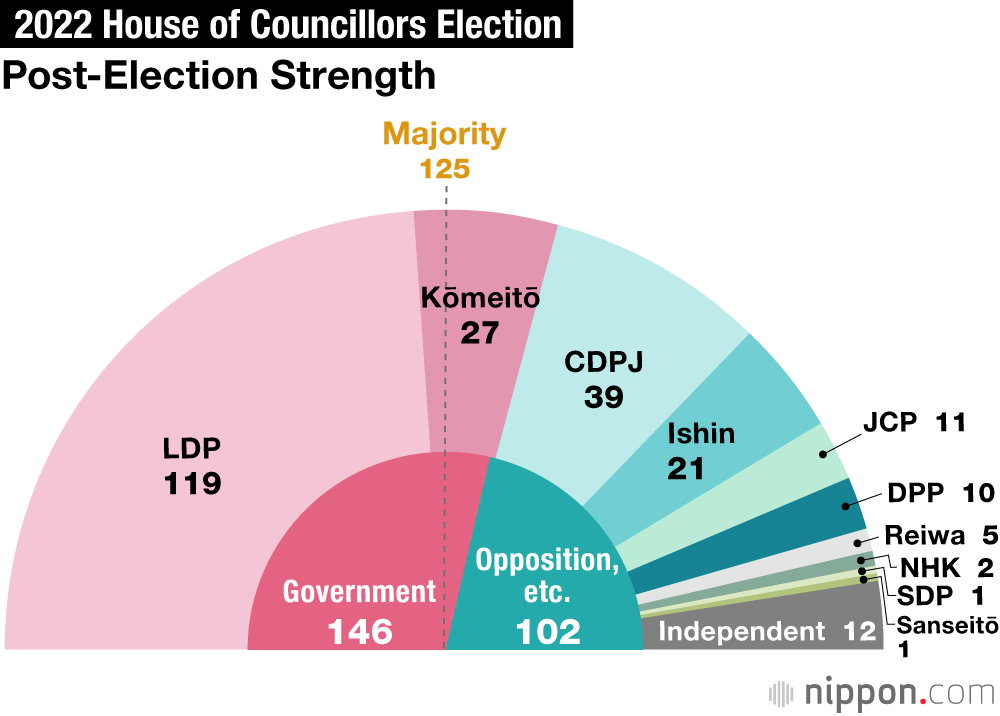 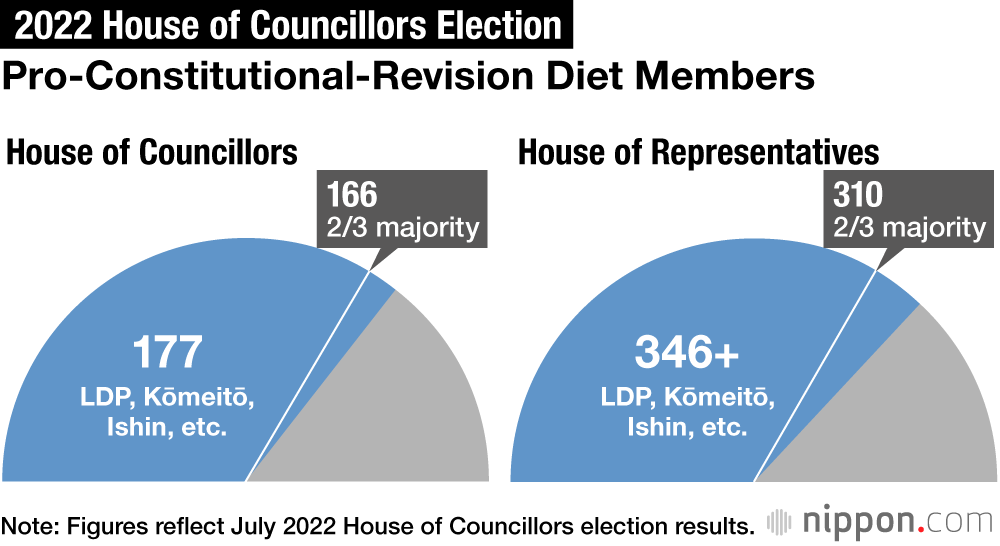 Voter interest in the July election appeared to be focused on rising prices, particularly in the wake of Russia’s ongoing invasion of Ukraine, measures to combat the COVID-19 pandemic, and security policy. Just two days before the election took place fresh turmoil erupted with the assassination of former Prime Minister Abe Shinzō during a speech supporting a candidate in Nara Prefecture.

The number of lawmakers in the House of Councillors rose from 245 to 248 in the current election, and 124 seats, half of the total, were contested as a matter of course. The one extra contest was to fill a vacancy in Kanagawa Prefecture, bringing the overall number of seats contested to 125.

In the 2019 upper house election, the opposition parties mounted a coordinated campaign, fielding one candidate with joint backing in numerous districts. This coordination was less evident this year, leaving multiple candidates fighting for the opposition vote in many cases. As a result, the LDP had a very strong showing in the single-seat vote, winning a total of 28 districts (up from 22 in 2019) compared to the 4 that went to opposition candidates (down from 10). 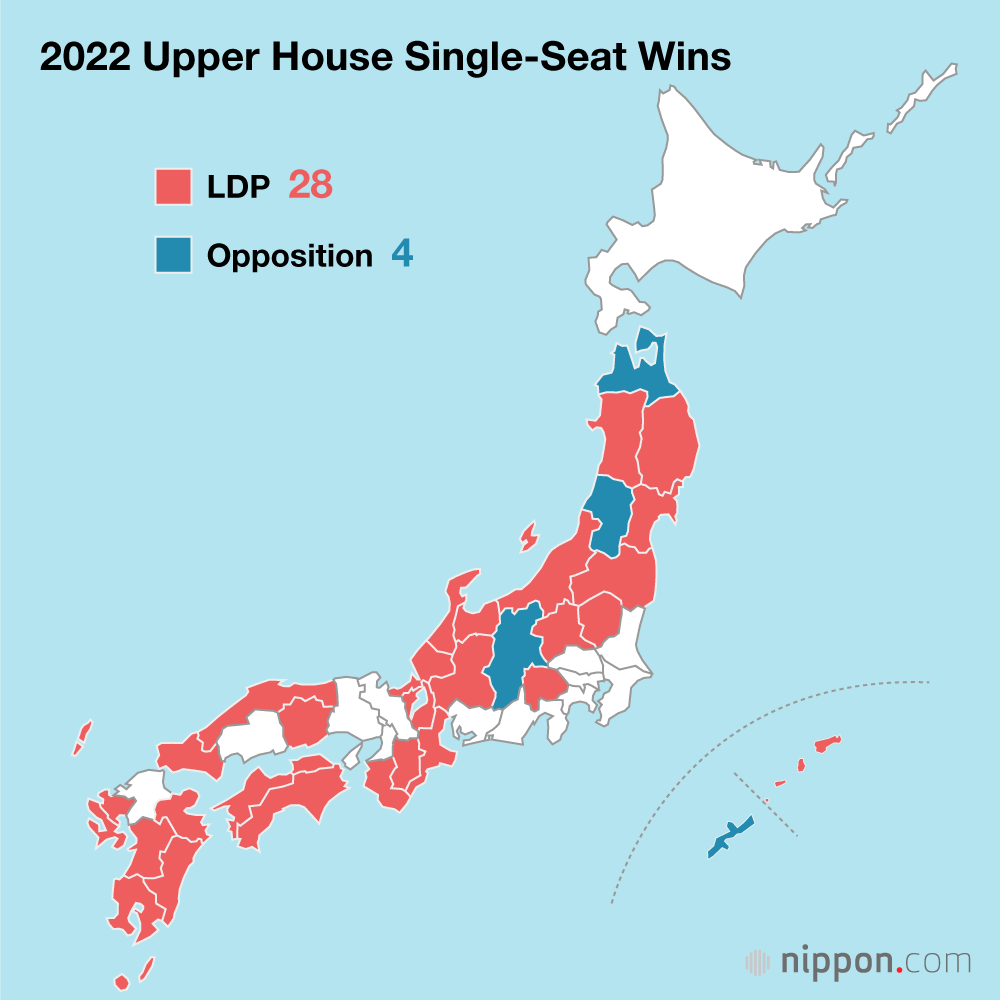