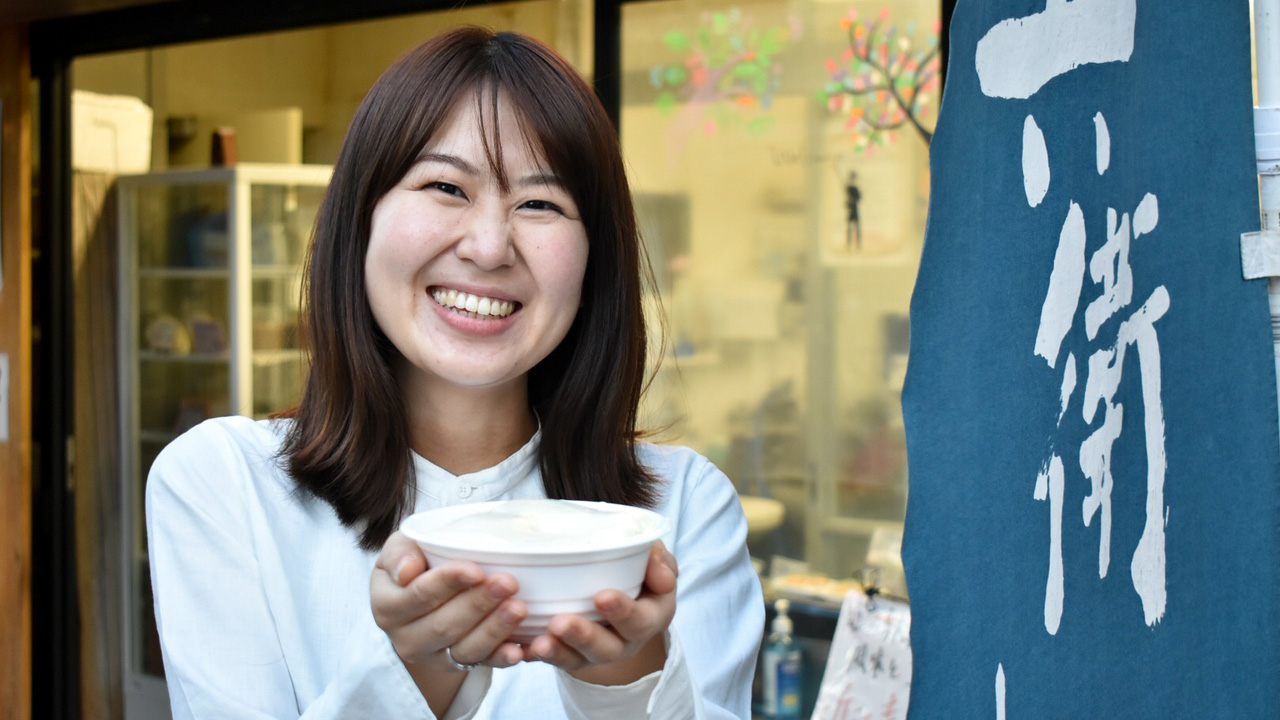 People Food and Drink Culture Jun 16, 2021
Tōfu may be made with the simplest of recipes, but its delicate texture hides fascinating depth. It offers something special to dishes all over the world, and in every season. Kudō Shiori talks about how her lifelong love of tōfu led to her becoming a certified tōfu meister, and her work in bringing others into the fold. 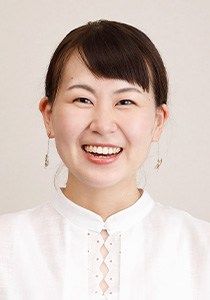 Tōfu. It strikes the tongue with smooth elegance, and fills the palate with the gentle sweetness of soybeans. It can even take on the texture of meat or cheese, depending on the preparation. Yet it is made from only three ingredients: soybeans, water, and nigari (one of a variety of natural coagulants). Production processes like pressing or drying can alter the flavors and textures in many ways. Soybeans are naturally high in protein and low in calories, earning it the Japanese nickname hatake no niku, or “meat of the field.” It serves as a nutritional staple for people of all ages. Kudō Shiori, who loves tōfu so much that people around her call her Mame-chan (Little Bean), is using the food to build international bonds.

Kudō has been a tōfu fan since she was a child, and even preferred it to rice. When she was in university, she bought all her after-class snacks at a tōfu shop rather than a convenience store. She remains an extraordinary fan of the food to this day, and claims to eat tōfu in one form or another for around 1,000 meals a year.

For Kudō, the joys of tōfu are its unobtrusiveness in dishes and its versatility. The soybeans that serve as the key ingredient are rich in protein, and the natural sugars they contain help deepen flavors. Tōfu can be used in western dishes like pasta, as well, either by cooking as-is or crushing it into a cream. It is a versatile friend that works no matter how it is prepared and served. 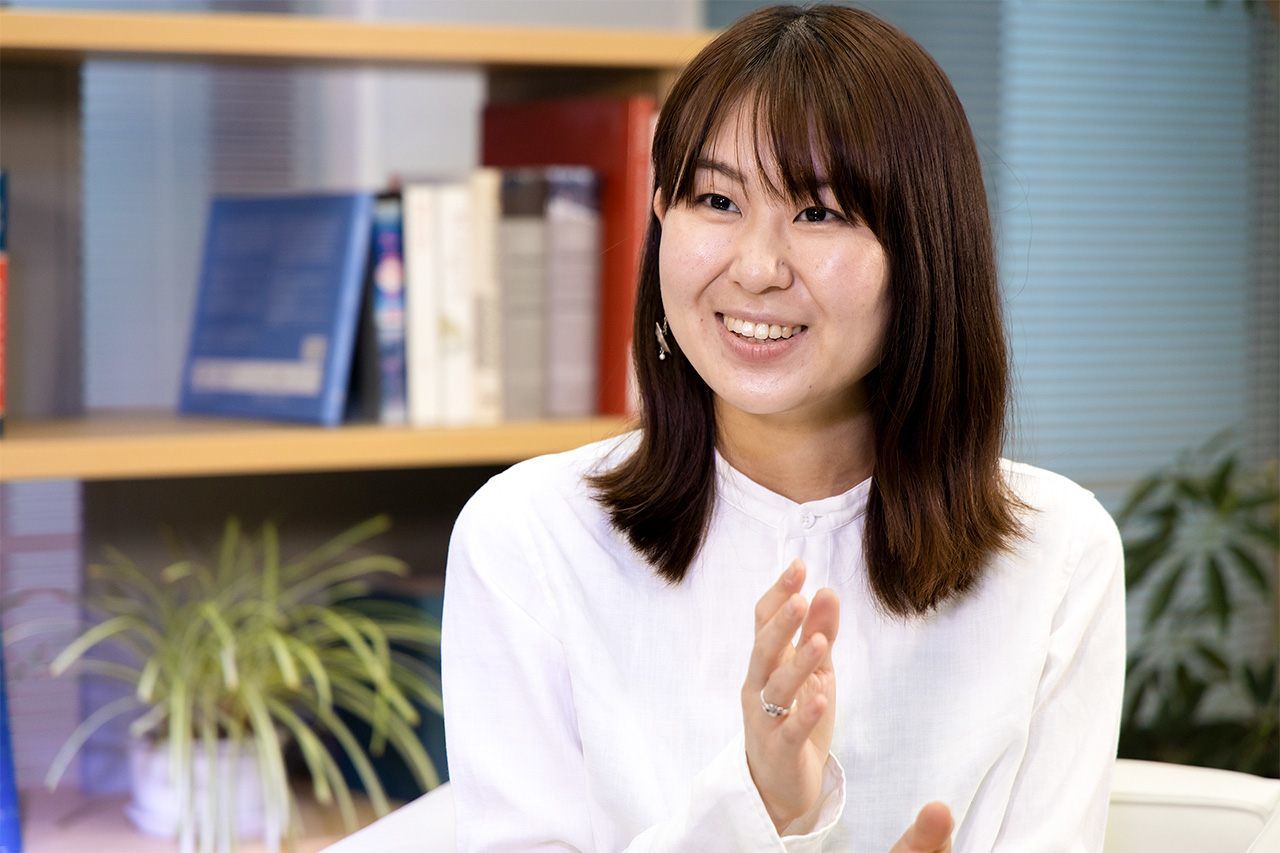 Kudō studied intercultural communication at university, and once considered becoming a Japanese language teacher abroad. She became a certified tōfu meister when she started graduate school in April 2013 because she thought the knowledge might be useful in her international efforts.

As a university student, she sometimes supported the instructors as an assistant in the Japanese language classes. She would go to lunch after class with her international students, and even invite them to her home. She found that many had religious dietary restrictions, or were vegan for personal reasons. Tōfu, though, is considered a halal food, and is also vegan. It may be valued in Japan for its beauty and nutritional benefits, but as part of general food culture it is an ingredient that can be enjoyed by anyone, regardless of nationality or religion.

However, while Japanese consumers may find it intimately familiar, many of the international students who went to buy tōfu were stymied by terms like momen, kinugoshi, or oboro. She would be happy to explain, saying that momen (cotton) tofu was firm, while kinugoshi (silken) was soft, and oboro—sometimes called yose—was freshly made tōfu that could be enjoyed as-is, or used in soup. 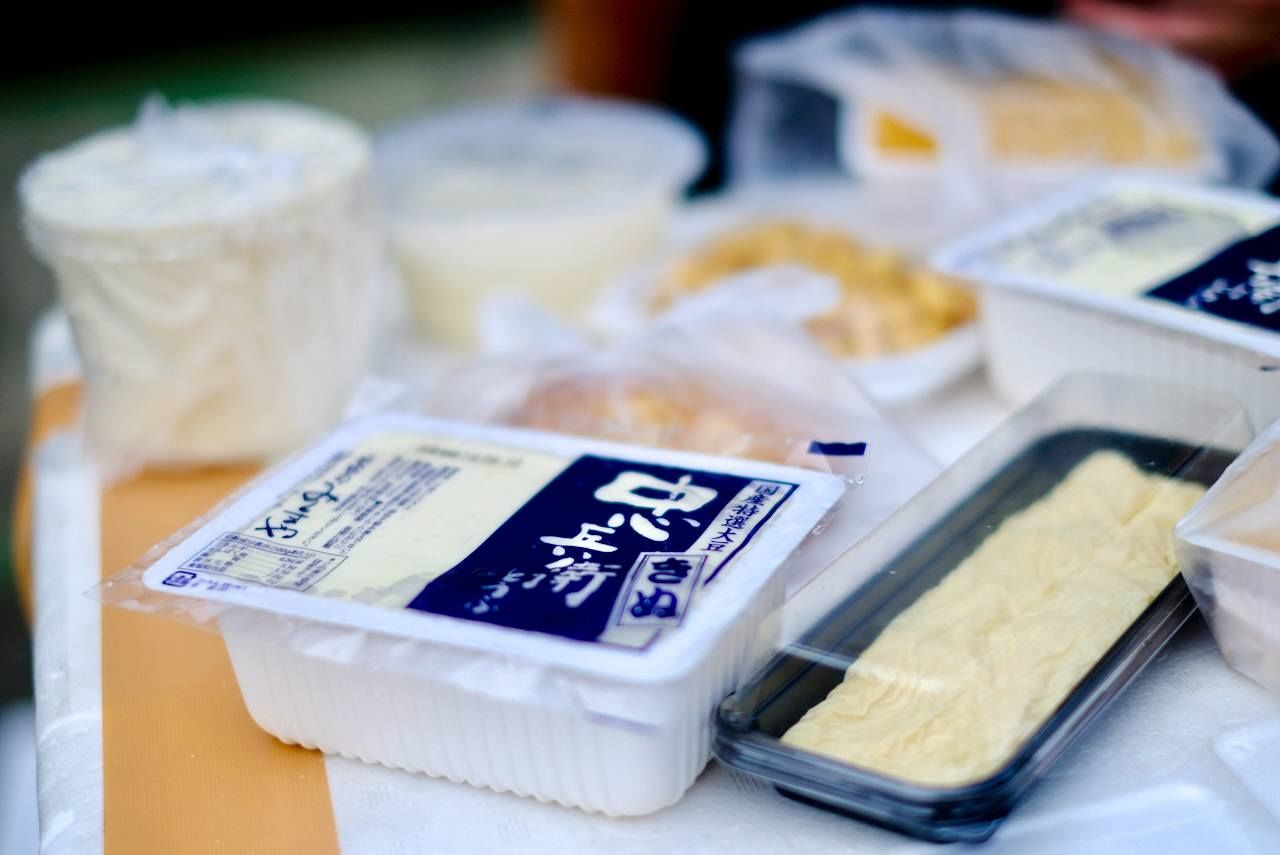 Kinugoshi tofu, in the white pack at left, and yuba (tōfu skin) in the black pack to the right. (© Kudō Shiori, with cooperation from Tōfutsukasa Mishimaya)

When Kudō asked international students how they ate tōfu in their home countries, there were all kinds of answers. Most never ate it fresh, as many cultures deep fry or stir-fry it. In Japan, though, there are many dishes that use tōfu with only the barest preparation, like hiyayakko (cold tōfu topped with flavoring like soy sauce, ginger, and spring onion) or yudōfu (blocks of tōfu in a hot broth). This was a novelty for many of the students, who seemed surprised that tōfu could be enjoyed without much cooking. Some connected it to the Japanese love of sashimi. 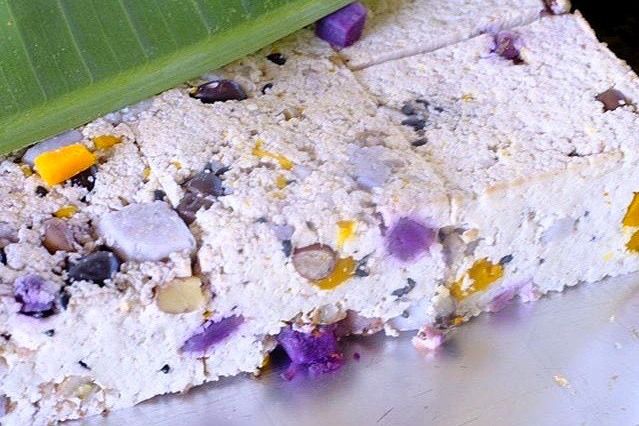 Her own travels helped her understand these differences even better. When Kudō visited Europe, she found lots of stir-fries made with hard types of tōfu. In Thailand, markets sold yellow cakes of fluffy saffron tōfu. When she went to Hawaii to help start up an abura-age (deep fried tōfu) shop, she found that consumers were soon hooked on it, and on inarizushi (sushi rice packed into abura-age pockets), because they just taste good. 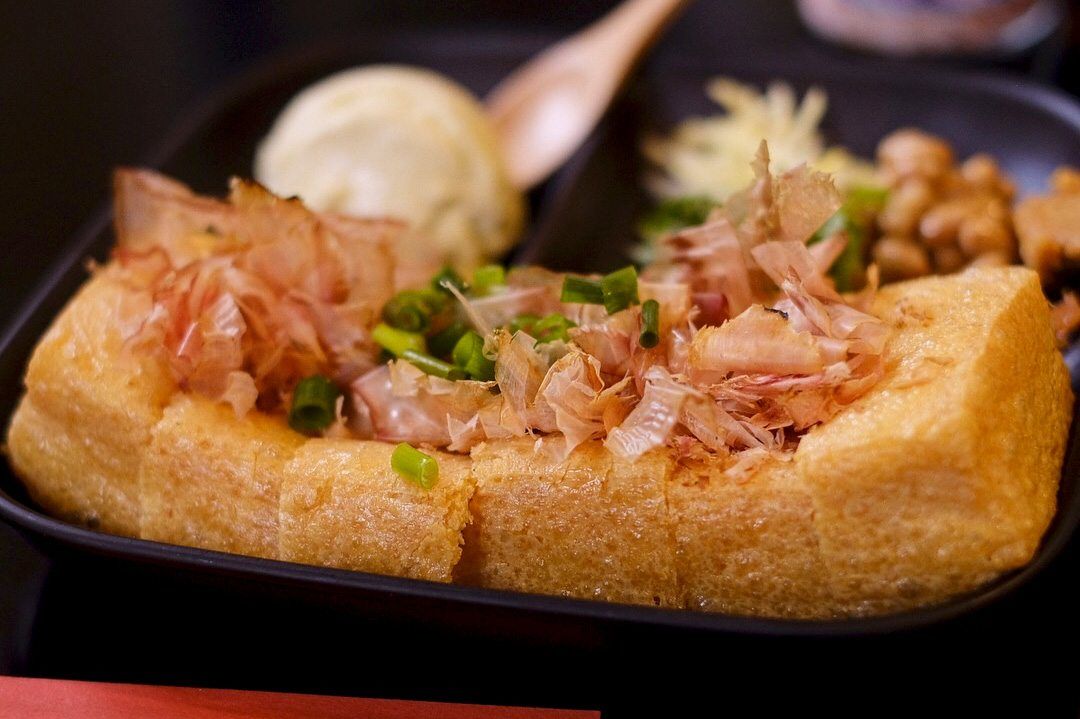 Tochio abura age, which was a hit in Hawaii. (© Kudō Shiori)

Kudō became a target for tōfu questions after she got her meister certificate, particularly once she started to host events like tastings. Soon, television variety shows began to court her as “Japan’s youngest tōfu meister,” since she was just 22 years old at the time. She says she felt a greater responsibility for her words then, since the viewers would believe her and choose tōfu based on what she said.

Kudō has started an Instagram account and published a series of articles to help spread information about events and the like. Since 2018, she has also worked under the trade name of Ōrai (a pun on the Japanese pronunciation of the phrase “all right”) on event planning, menu creation, matching and coordination, news gathering, and design projects in and outside of Japan to spread the word.

Past activities have included displaying signs naming the tōfu shop supplying specific bakeries with their soy milk, selling high-quality tōfu at live events, and serving hiyayakko at ceramic artist shows. Kudō feels like working in cooperation with people in other industries and fields, like art or music, can offer a whole new range of possibilities.

When I ask why she is putting so much effort into public awareness activities and advertising, she explains: “Private tōfu shops don’t make TV or radio commercials, or put ads in the newspaper.” Tōfu artisans tend to be persistent, patient, quiet, and isolated workers. They often find it difficult to promote their work to the outside world.

In her courses, she teaches people how to choose, use, and make tōfu. She wanted to offer as many people as possible a chance to know the food better, so she began to set up events at group homes and healthcare centers, and brought a tōfu shop owner to the international student dorm to teach around 60 students how to make it. The primary goal was simply greater awareness. She felt that if consumers became more knowledgeable about tōfu, it could add a whole new layer to their diet. She also realized, though, that it could help tōfu shops survive. 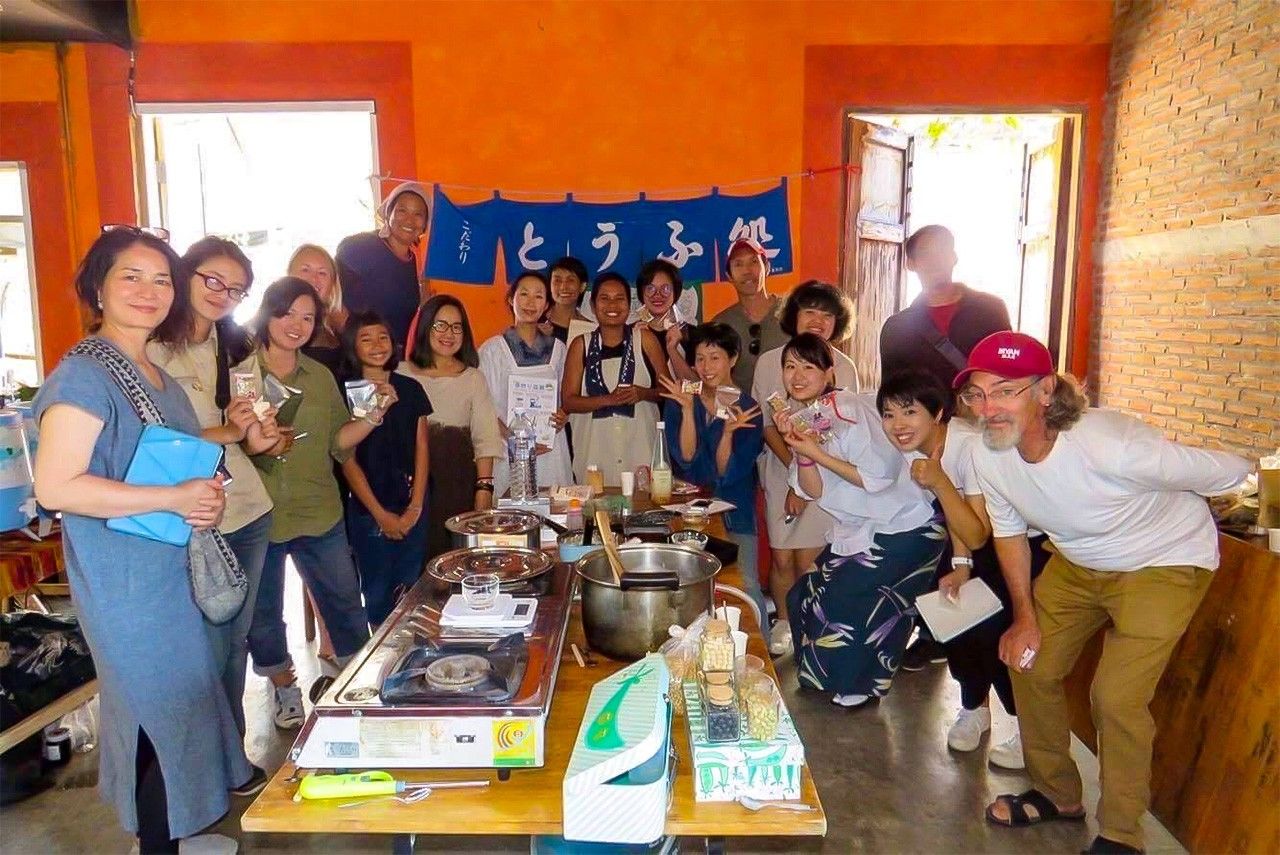 At a tofu-making workshop for local residents in Chiang Mai, Thailand, in February 2017. (© Kudō Shiori)

However, even as consumption grows, the number of small scale tōfu shops continues to dwindle. Zenkoku Tōfu Rengōkai, the national association of tōfu producers, reports that at the peak in 1960, there were 51,600 tōfu shops. That number had dropped to just 5,713 by 2019. Around 1962, major Japanese manufacturers and specialty store cooperatives began seeking greater hygiene control and efficiency, so they modernized their facilities and started to distribute through supermarkets and discount stores. Small specialty shops faced a fierce struggle as their consumers aged and competitors drove prices down.

“There may be no stopping the loss of small-scale tōfu shops,” admits Kudō. “But I believe those shops help shore up Japan’s food culture through connections to the local community, and their role teaching about tōfu and soybeans at elementary schools.” It appears that while 500 of the shops close every year, another 100 new ones open up. Kudō believes that the greatest chance for survival lies in spreading awareness of their value, so that residents come to value living in communities with such specialty shops and actively want to help preserve them. 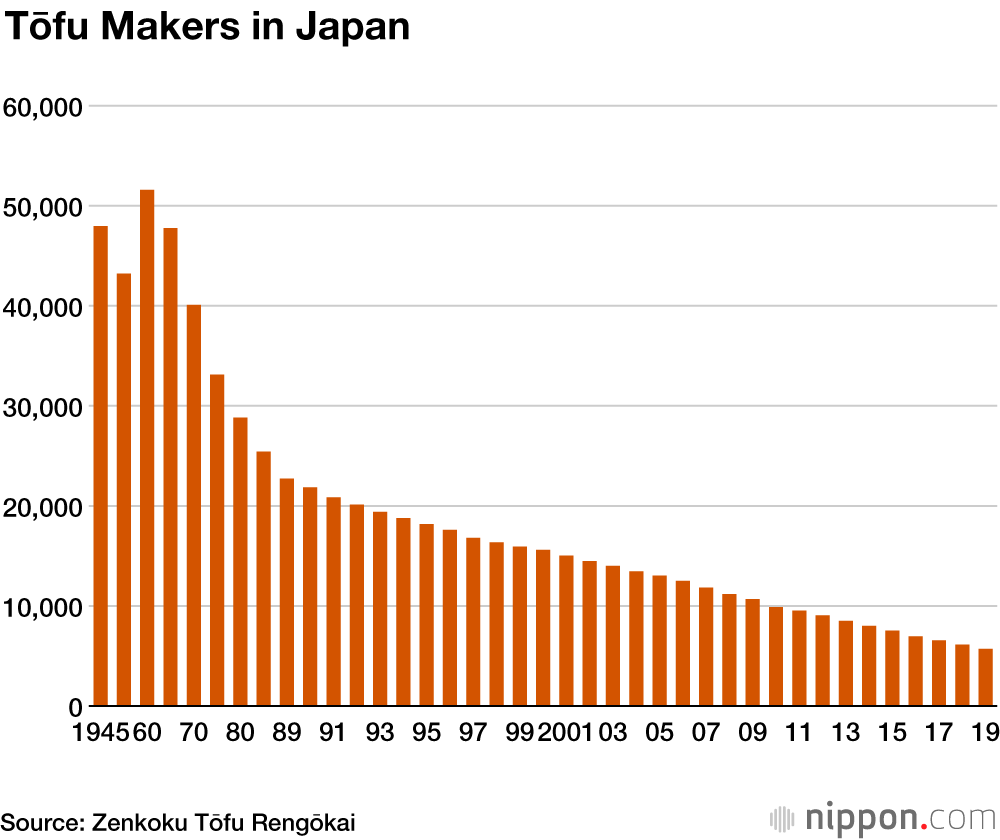 Tōfu has less brand awareness or focus on ingredient varieties than luxuries like coffee or cheese. Kudō says that is because consumers simply don’t have the opportunity to encounter tōfu that stands out as truly delicious.

Tōfu also has a huge variety of styles, and can be made from any of around 400 of the soybean varieties grown in Japan. There are also style differences across every region of Japan, from Hokkaido to Okinawa. Kudō describes this as jūnin tōiro (find ten makers, get ten different types of tōfu), a pun on a Japanese proverb about human variety. In Kyoto, diners prefer soft tōfu that melds seamlessly with dashi broth and accompanying dishes, while in Tokyo they like tōfu with assertive natural bean sweetness; in the snowy Hokuriku region, meanwhile, they use tōfu so firm that it stays together even when bound up with string. 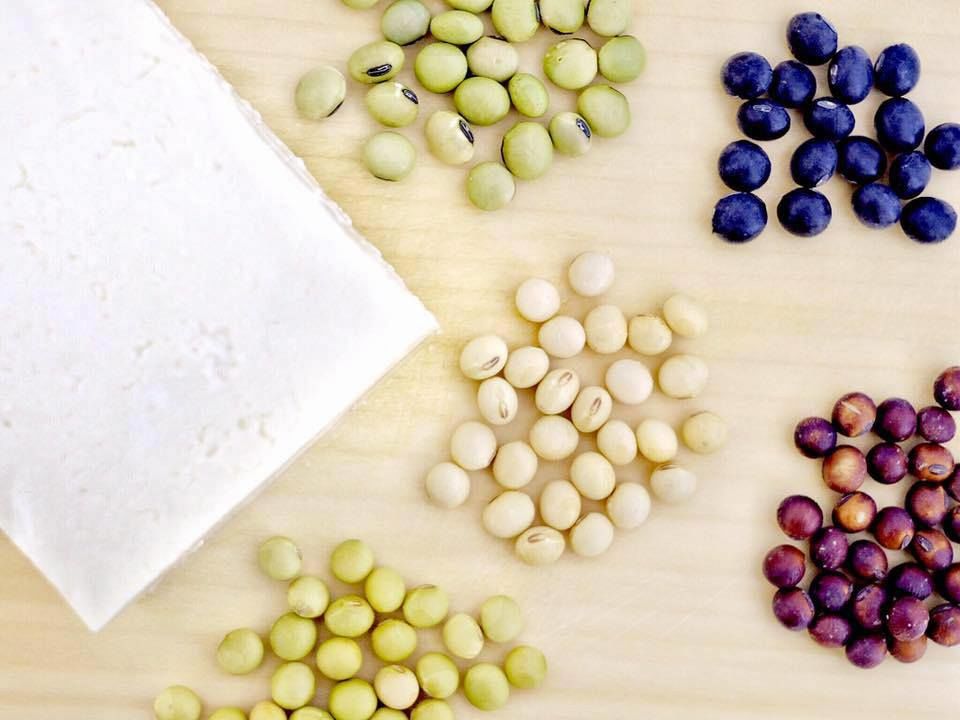 A block of tōfu with various soybean varieties. (© Kudō Shiori)

If people explore grocery stores and specialty shops when they travel, they may be shocked to find how different the local varieties of tōfu are. Then, if they can find one block of outstanding tōfu at a tōfu shop, then they will surely become fans, even if it is ¥100 more expensive, or the shop a bit out of the way. Interaction with those local shops can also help people enjoy their purchases better, Kudō notes. Once an owner recommended she let their tōfu sit out for 15–20 minutes to warm up to room temperature. It brought out the natural umami and aroma for even greater depth of flavor.

“With the COVID-19 pandemic right now, people have a chance to reevaluate the things they’ve been eating without a second thought, and really dig deeper into them. I think if people wake up to just how delicious tōfu is, it can add some fulfillment to life. We eat three times a day, so having an attachment to our food really can bring greater enjoyment,” she says. It may take some effort, but it is worth it if it means more people can better enjoy tōfu. 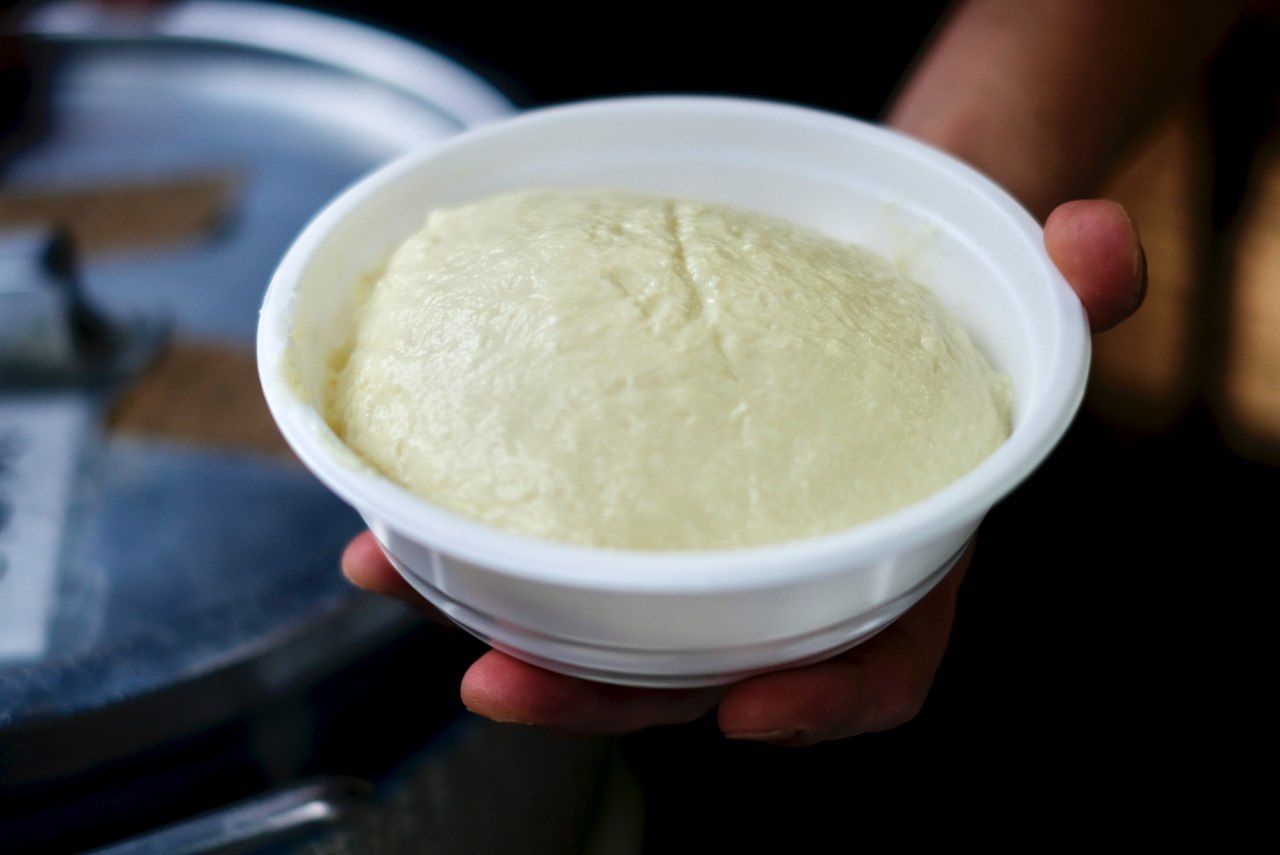