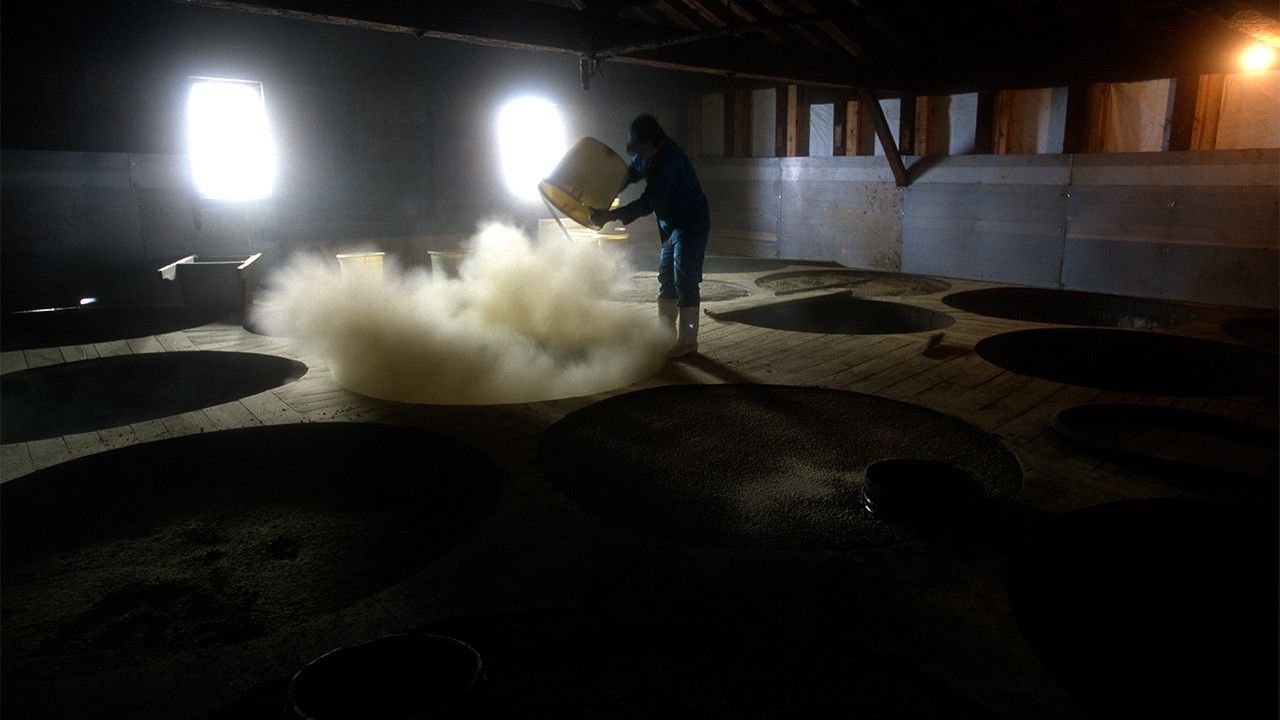 Soy sauce, long a staple of Japanese cuisine, is attracting fresh attention in kitchens around the globe as a way to add a dash of umami to dishes. Brewed for centuries from four basic ingredients—soybeans, wheat, salt, and water—the seasoning owes its taste-enhancing properties to the fermentation power of kōji mold.

The roots of Japanese soy sauce stretch back to an ancient progenitor called hishio. This semisolid, fermented seasoning was made by mixing salt with ingredients like vegetables, meat, or fish. Commonly used to flavor dishes, in the Nara period (710–94) the government brought it under official control, establishing a special bureau that regulated production and oversaw trading and taxation. Over time, hishio made from grains like wheat and soybeans developed into miso and soy sauce. Other varieties live on today in such forms as the pickled vegetables known as tsukemono, a pungent dish called shiokara made from fermented fish innards, and regional fish sauces like Akita’s shottsuru and ishiru from the Noto Peninsula in Ishikawa Prefecture.

The natural method of brewing soy sauce remains basically the same as in old times. Steamed soy beans and roasted wheat are mixed with tanekōji, or “seed mold,” and left to incubate for around four days in an environmentally controlled room called a kōji-muro. The starter is then mixed with salt and water in a vat or large wooden barrel to form moromi, or mash, that slowly ferments over months—and in some cases years, depending on conditions and the type of soy sauce. 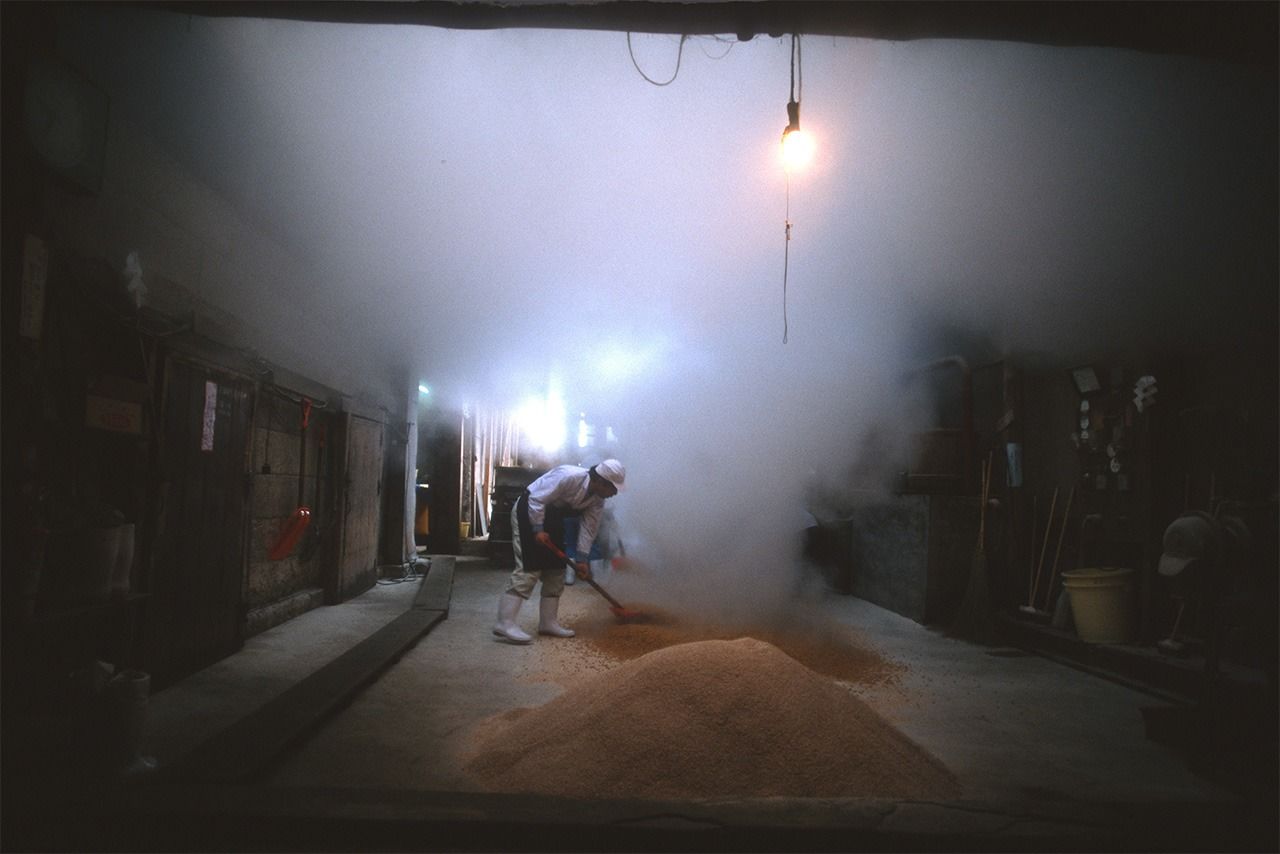 A worker at soy sauce brewer Ishimago in Yuzawa, Akita Prefecture, uses a shovel to mix steamed soybeans and roasted wheat with tane-kōji. The mixture will be packed into shallow wooden boxes and set to ferment in the kōji-muro.

Once the fermentation process is completed, the mash is pressed and the soy sauce collected. During the Edo period (1603–1868), this final laborious step made soy sauce a more expensive product than related seasonings like miso, which is consumed as a paste and does not require additional refining after fermentation. At that time, shōyu was a luxury enjoyed mainly by the warrior class. 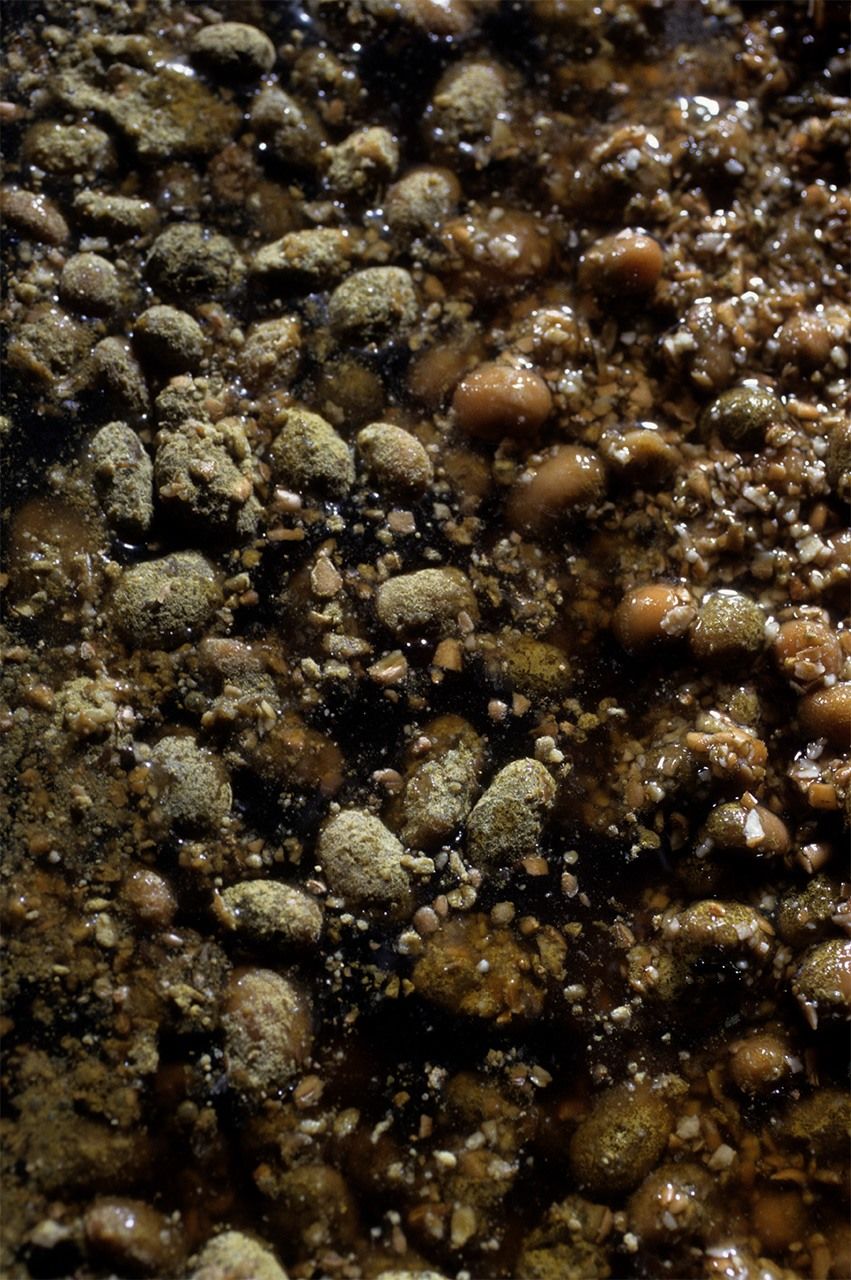 Two-week old moromi is mostly odorless and has a strong salty flavor. 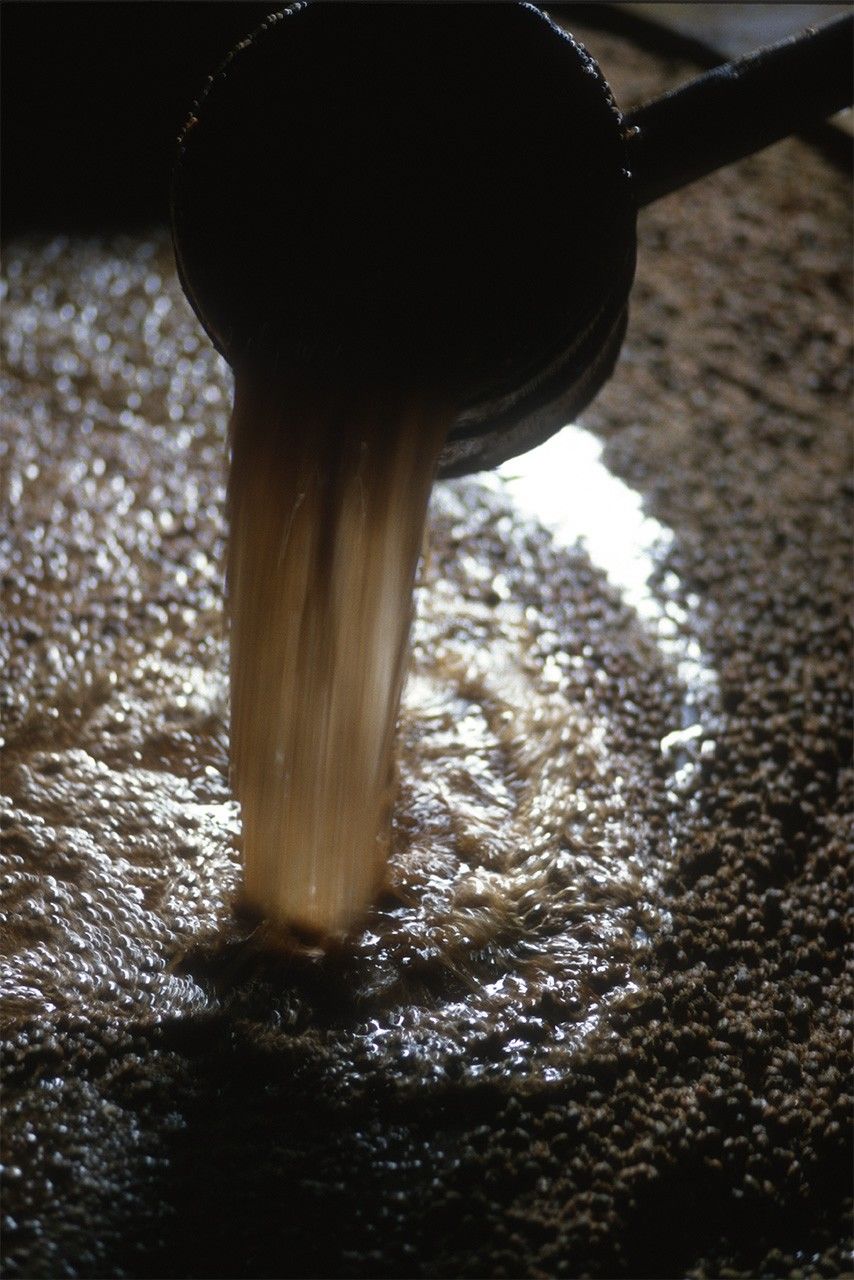 For two months, the mash is stirred twice a day to keep the contents mixed and to prevent a crust from forming on the surface. 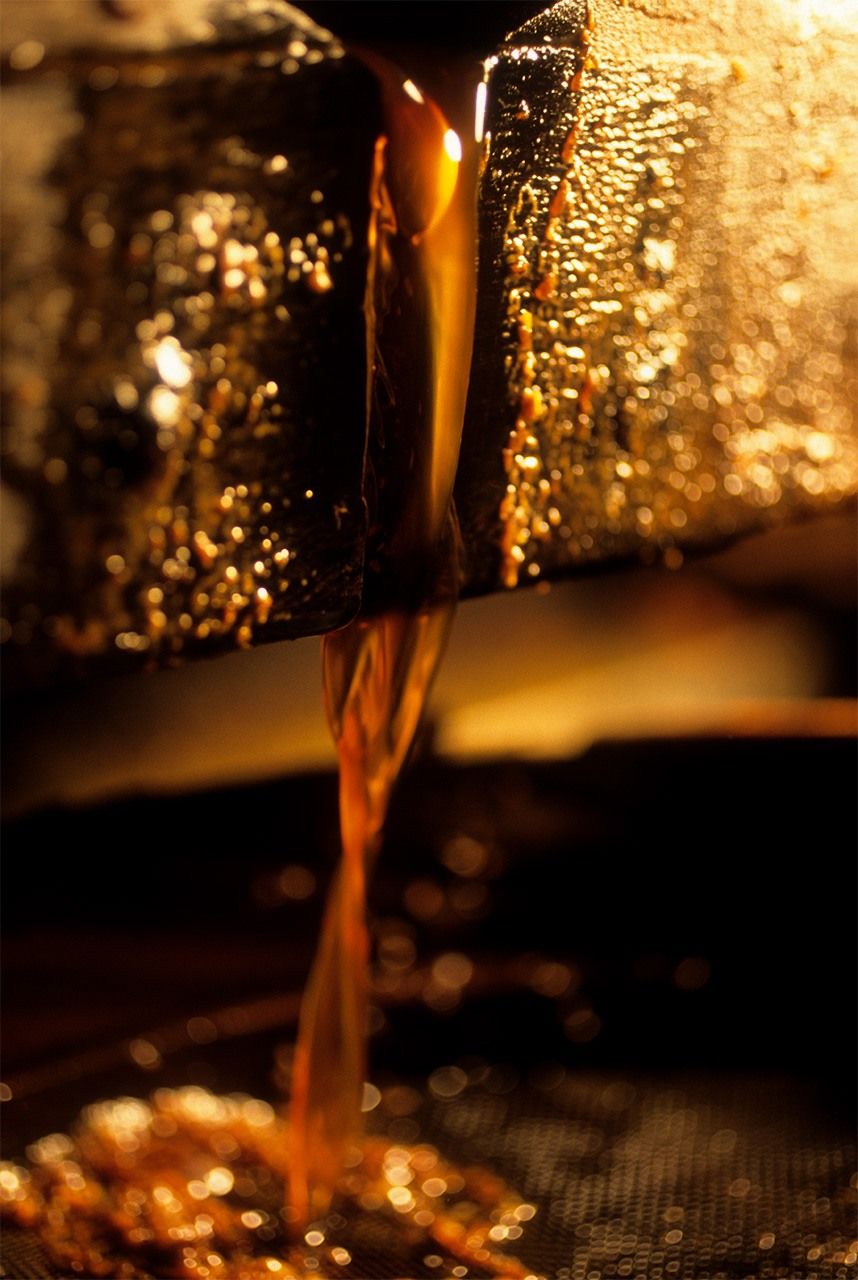 At the end of fermentation, the mixture is pressed and the raw soy sauce collected.

Along with its seasoning attributes, soy sauce also contains natural antimicrobial compounds effective in curbing foodborne pathogens like E. coli. In the days before refrigeration, Japanese chefs would marinate fish and other raw delights in the briny sauce to enhance flavor and prevent ingredients from going off.

The Edo-period physician Hitomi Hitsudai, a leading herbalist of the day, lauded the flavoring and medicinal benefits of soy sauce, writing that it balanced the five basic flavors of foods—salty, sweet, bitter, spicy, and sour—and brought joy to eaters. He also claimed its harmonizing properties, which were only enhanced by the length of the fermentation period, were effective in dulling the harshness and toxicity of many herbal remedies.

For generations, communities around Japan brewed their own soy sauce with fresh water and locally grown ingredients, giving each regional product its own distinct characteristics. However, after World War II, brewers faced severe shortages of basic ingredients and turned to a less expensive, more readily available alternative, soymeal that had been processed to remove fat and oil. Desperate to keep up with burgeoning demand for inexpensive soy sauce, makers also shortened brewing times to just a few months, fortifying products with artificial flavorings, aromas, and colorings to mask the lower quality. Many brands on the market today are still made in this manner—and, as the artisans of the old tradition lament, the victory of cheaper options in the market drove the high-grade, handmade sauces out over time.

Naturally brewed soy sauce typically takes from six months to a year to complete, with the end product needing no chemical enhancers. Batches can be aged a further two or three years, yielding an even richer flavor and aroma. The difference is immediately apparent: naturally brewed soy sauce just smells and tastes better than the mass-produced sauce most consumers know today. However, in the postwar years, shoppers were not willing to pay premium prices for the staple seasoning, and many brewers preserving traditional, time-consuming techniques were swept away by competitors producing low-priced, chemically enhanced soy sauce. This was the death knell of the era when each town with a high-quality water supply was guaranteed to have its own sake, miso, and soy sauce makers on hand, putting out products with unique local flavor.

The last few years have seen a heartening trend, though, as the growing number of travelers stepping off the beaten path in search of regional specialties has helped to revive interest in traditionally brewed soy sauce. One local maker benefitting from the renewed attention is Ishimago. Located in Yuzawa, deep in the snow country of Akita Prefecture, the brewery continues to make soy sauce and miso from locally sourced ingredient and carefully cultured kōji. 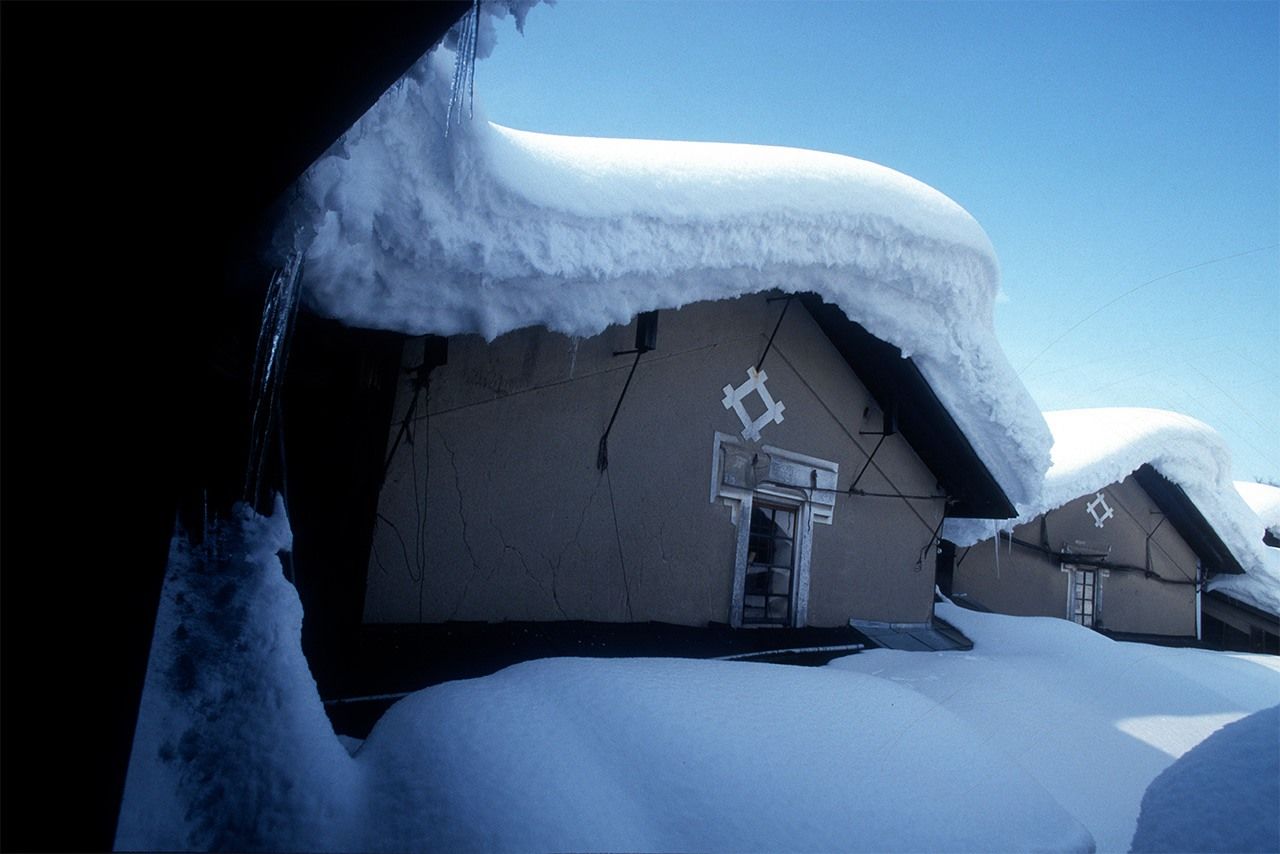 Brewing at Ishimago takes place in old-style warehouses dating back over a hundred years. The five structures are registered as important tangible cultural properties.

The still atmosphere inside the soy sauce warehouse is punctuated by the sound of the brew master hastily climbing up and down a wooden staircase leading to giant vats filled with aging batches of mash. On each ascent he shoulders a wooden bucket filled with a starter mixture—soybeans and wheat covered in kōji mold—depositing the ingredients in a cloud of dust into a massive vat capable of holding some 5,500 liters. Once the backbreaking task is completed, salt and water are added and the mixture stirred, putting the microbes to work creating soy sauce.

As the mash slowly ages, fermentation picks up in the early spring, reaching a peak in the summer months, and then slows down with the arrival of cool autumn weather. Other than regular stirring to keep the mash well aerated, the human staff do little more than leave the kōji mold do its job. 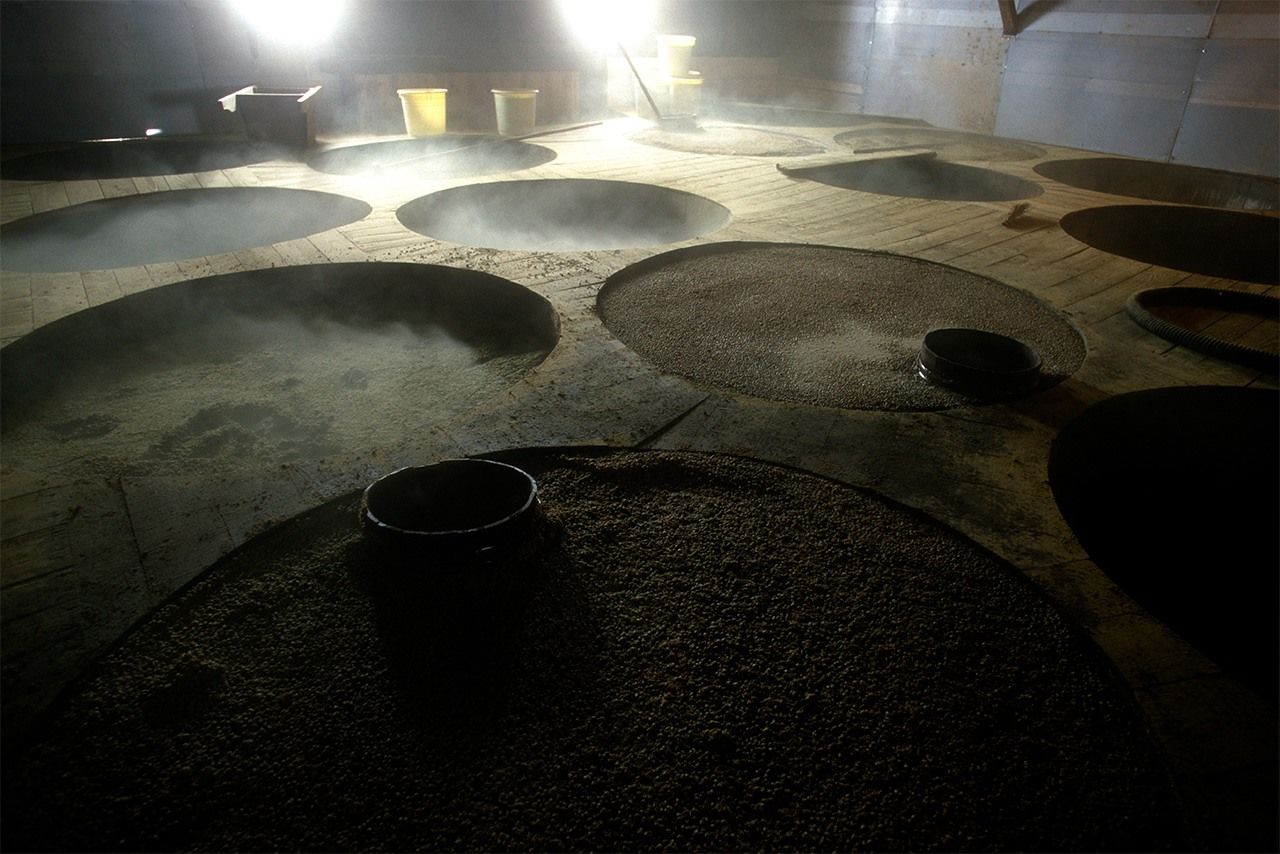 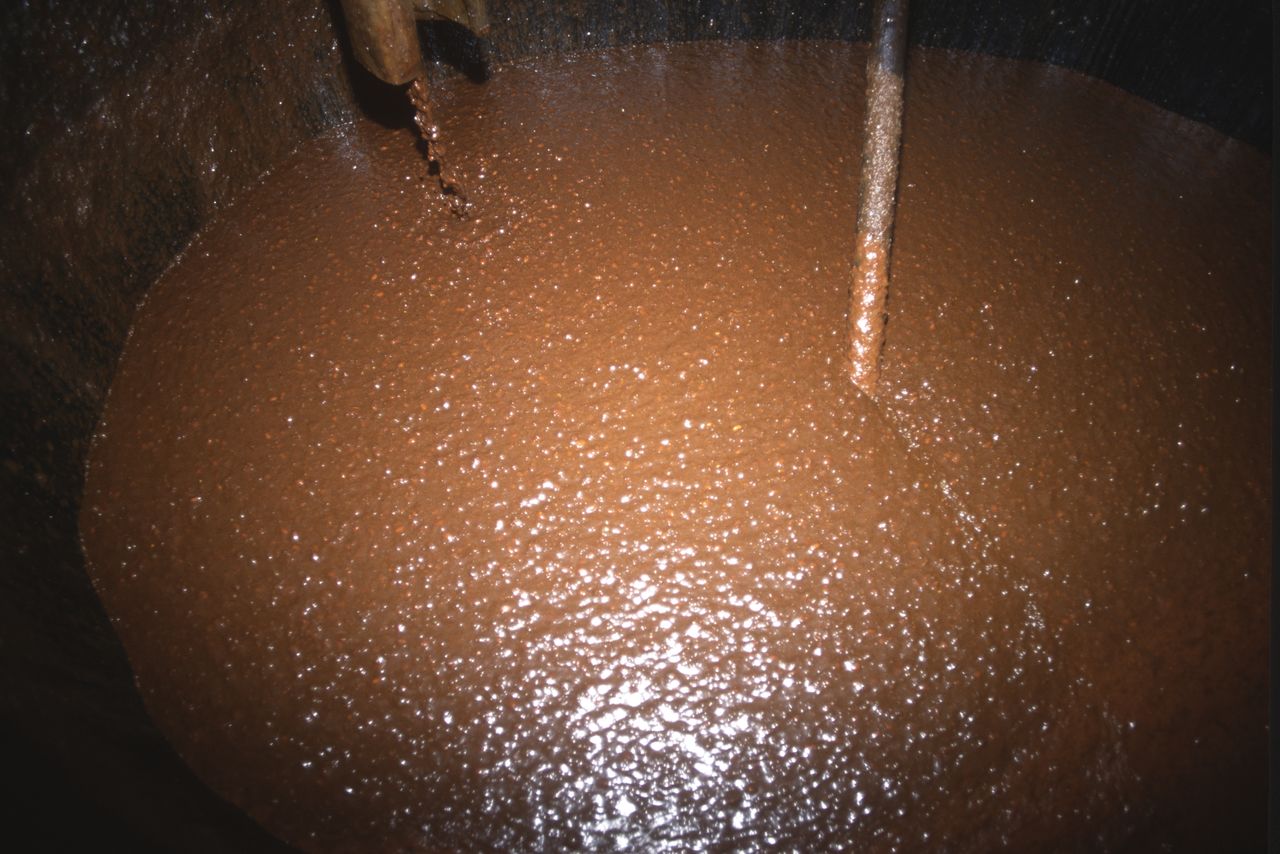 The mash is mixed with a special stirring stick called a kaibō. After six months, the soybeans and wheat have dissolved into a dark brown mixture.

It All Starts with the Kōji

In the frigid winter months, the brewer cultivates the contents of its starter mixture with the aid of two open hearths set up in the kōji-muro. Just as in the past, red-hot charcoal is covered in straw ash to keep the room around a balmy 30 degrees Celsius, the ideal temperature for growing the all-important kōji mold. 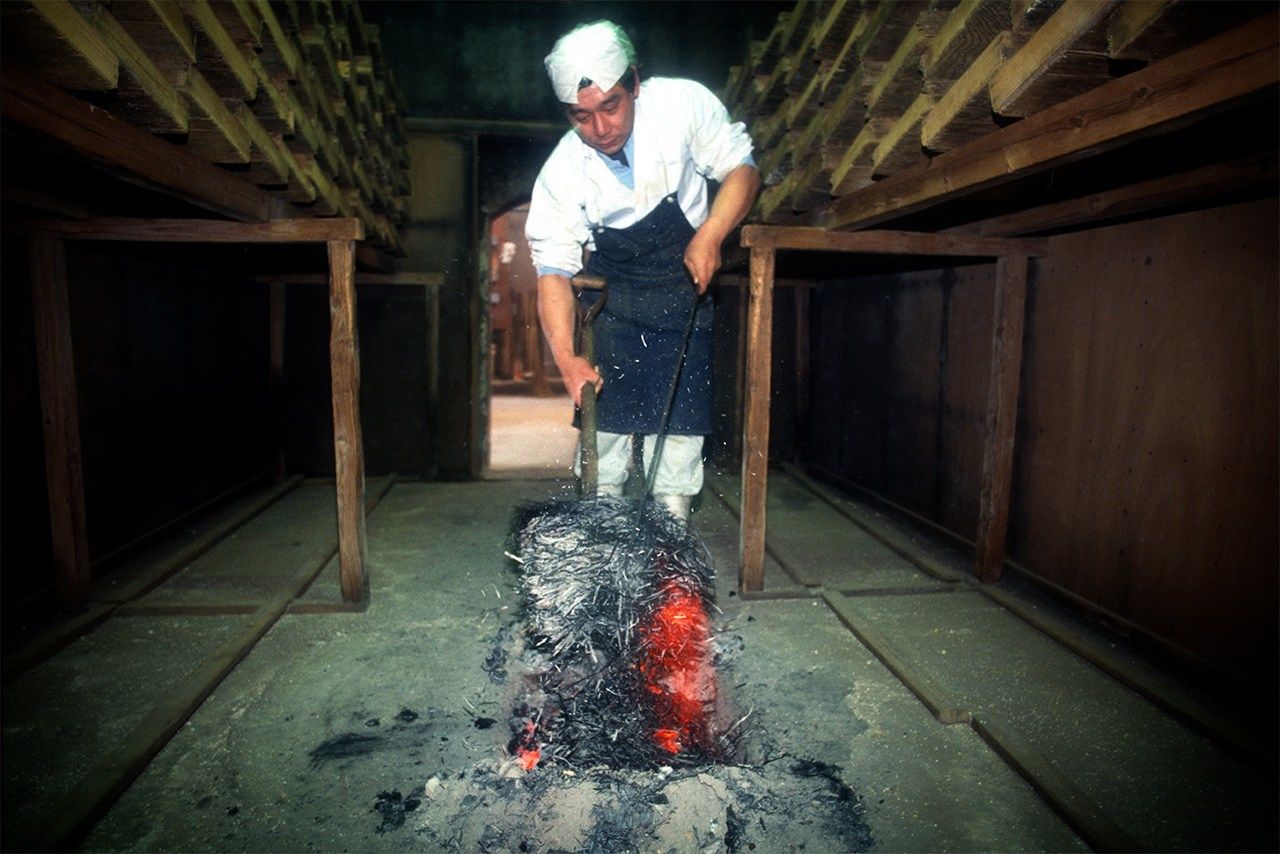 A worker covers glowing embers with straw ash to heat the kōji-muro.

Ishimago’s head kōji cultivator, Hatazawa Kōta, says that skill and constant vigilance are needed: “After placing the coals in the hearth, we check the temperature every two and a half hours. If the room gets too hot, we crack a window to let in some cold air.”

Workers cultivate the starter in wooden trays called kōji-buta, stacking these at an angle to allow air to flow over the surface. Temperatures vary between the floor and ceiling, and the trays are rotated several times during the four-day cultivation period to keep mold growth even. Hatazawa warns that the kōji also produces heat as it grows. To avoid losing an entire batch of the delicate mold, workers check each kōji-buta by hand, carefully stirring the starter mixture to release heat. 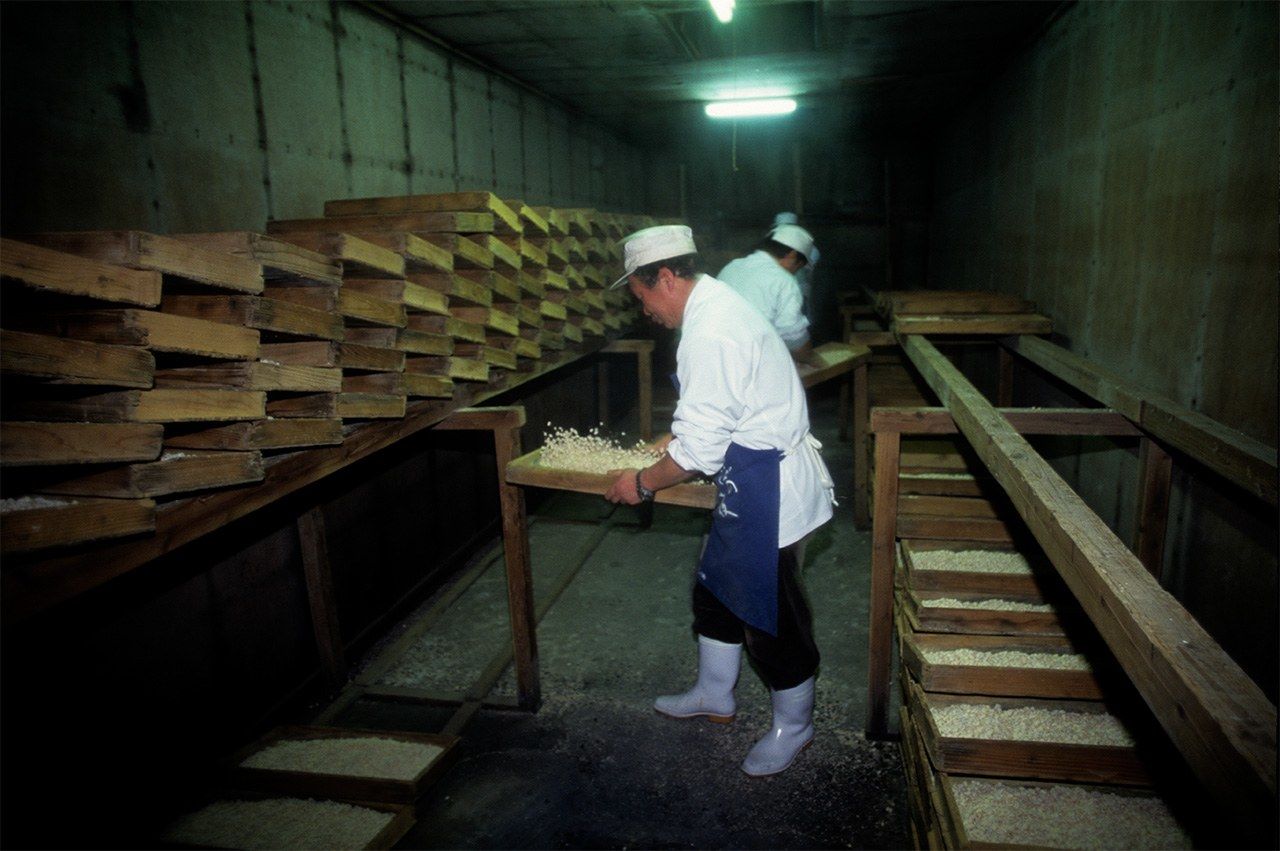 Workers in the kōji-muro one by one mix and rearrange the trays.

Proper cultivation of kōji is key to brewing soy sauce, and at the end of the fourth day, the starter mixture, now covered in a layer of green mold, is ready to go into the fermenting vats. 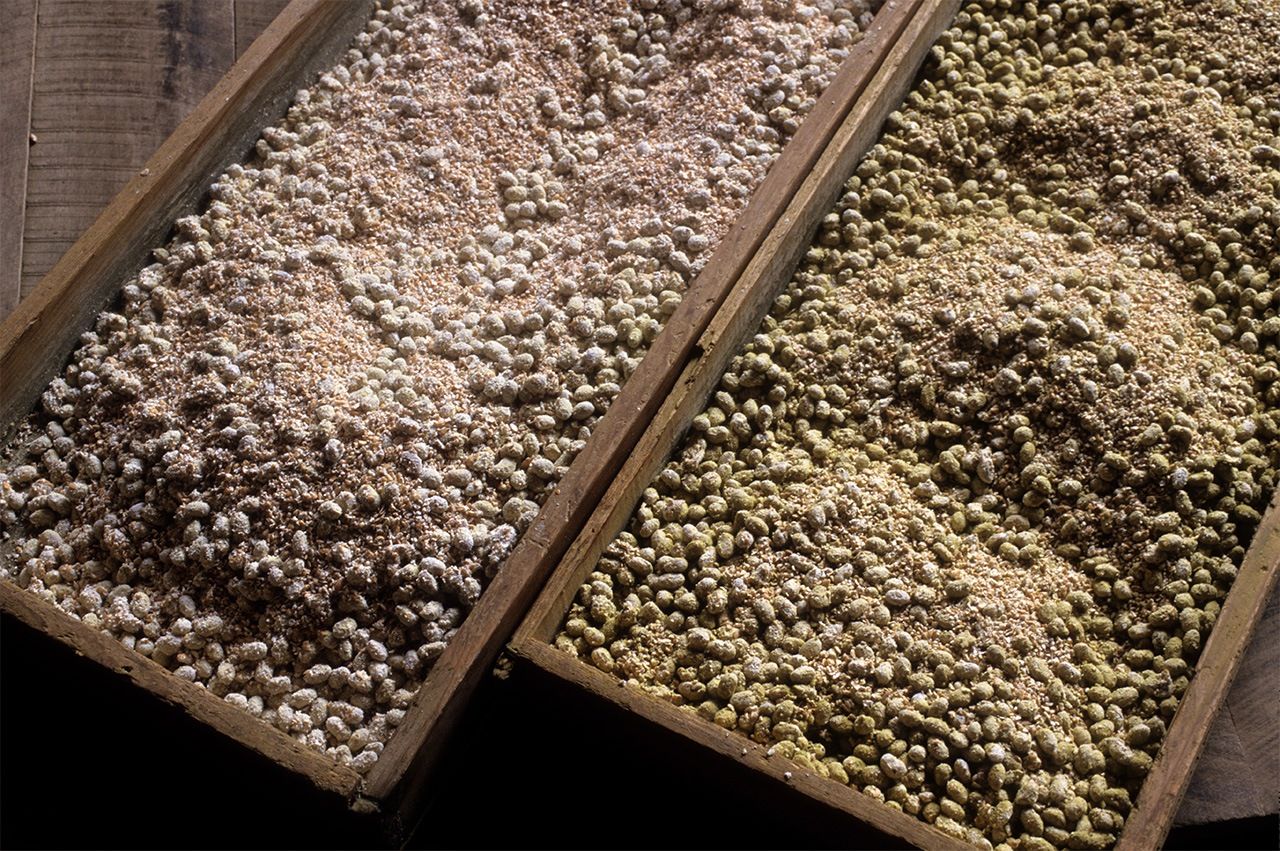 It would of course be less labor intensive to automate aspects of the brewing process like temperature control and mixing, but there is something to be said about the skills of the workers at the brewery. Their understanding of age-old natural brewing methods is what makes each drop of Ishimago soy sauce something to be savored. 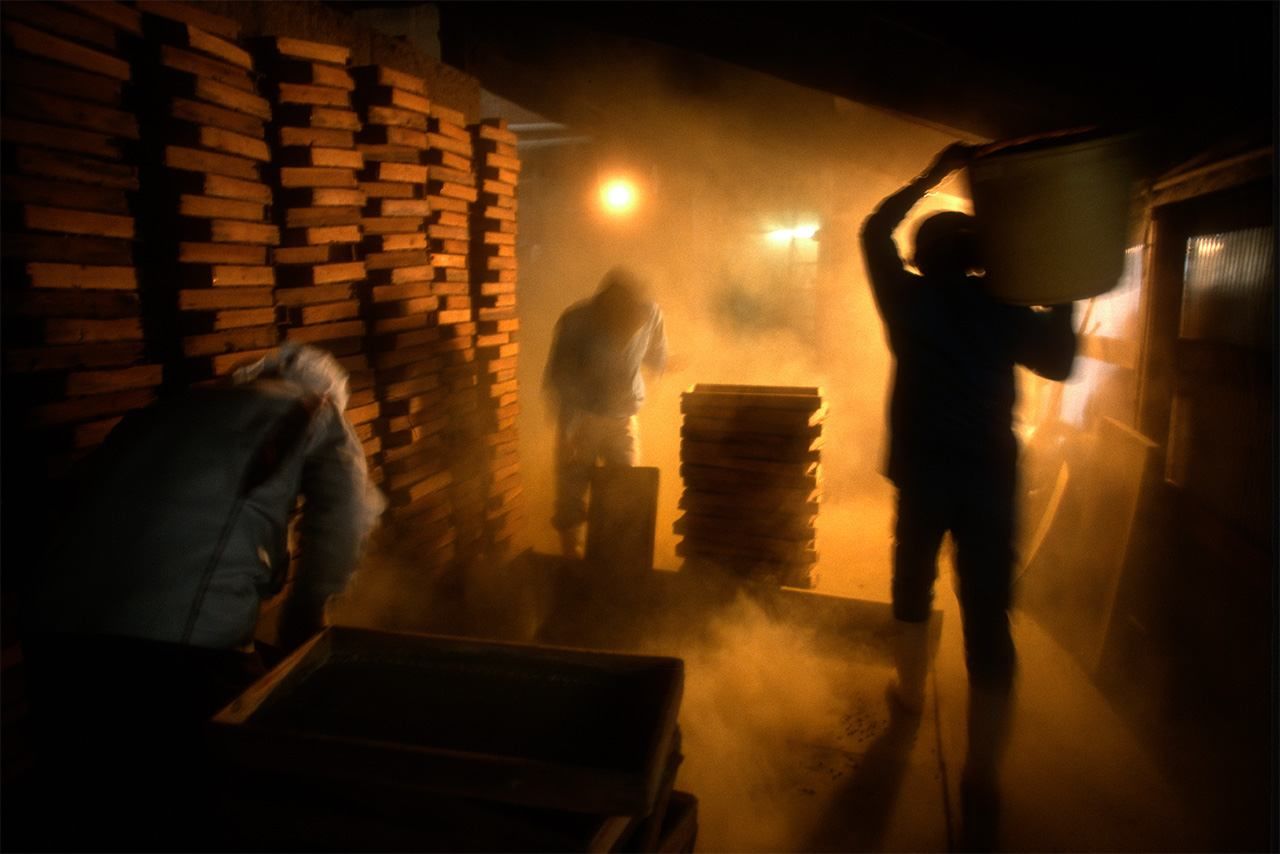 Kōji mold fills the air as workers transfer finished starter mixture to the vats, where it will be stirred into salt and water to form the mash.