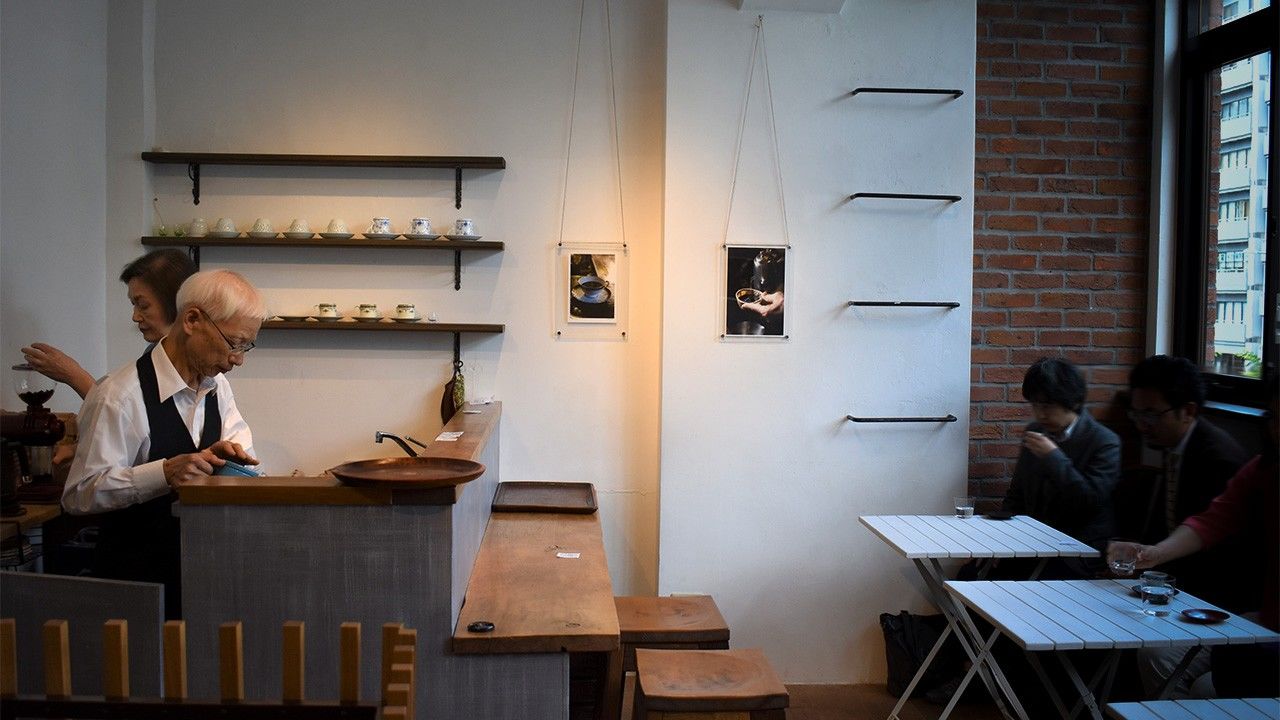 Sep 10, 2019
For nearly four decades Tokyo’s Daibō Coffee Shop was an Omotesandō institution. Proprietor Daibō Katsuji talks about appeal of the café and his distinct approach to brewing coffee.

A Legend Returns: For a Limited Time Only

For decades, the Daibō Coffee Shop was one of the best-known cafés in Tokyo. Located a stone’s throw from major crossroads in Omotesandō, it was nestled among the neighborhood’s numerous high-end fashion boutiques, sophisticated restaurants, and upscale bars. The owner, Daibō Katsuji, ruled the roost from behind an imposing counter of solid wood, preparing each cup by hand using cloth filters and beans he roasted himself. The coffee and quiet, dimly lit interior of the shop attracted a loyal clientele, Murakami Haruki and other cultural giants among them. The café was as popular as ever but closed its doors for good in December 2013 after 38 years in business following Daibō’s landlord deciding to knock down the building for redevelopment.

This spring, the Sanyōdō bookstore directly opposite the café’s former location held a special event that had coffee aficionados buzzing. To celebrate the publication of a collection of essays by Daibō titled Daibō kōhīten no manyuaru (The Daibō Coffee Shop Manual), the bookseller brought the cafe back to life—for two days only.

The event attracted well over 100 coffee enthusiasts from around Japan on both days, including past patrons eager to relive the flavor and first timers keen to get a taste of the legendary brew. Bookshop employees were particularly astonished by the number of young people waiting in line to buy a copy of the book, despite its considerable price tag. What is it about Daibō’s coffee that exerts such a special irresistible appeal on so many people?

One Drip at a Time

The event was an opportunity to see a coffee master’s legendary technique. Up in the event space on the third floor of the bookshop, Daibō stood quietly behind the counter, nearly statuesque, carefully preparing each cup using his distinctive hand-drip method. As soon as an order arrived he would grind a small amount of his deep-roasted beans using a rough grind, the delicate aroma of coffee drifting through the room as he turned the handle. Then, with his body bent forward slightly, he started pouring the hot water, his gaze fixed on the slow drip from the spout. Holding the pot still, he lifted and lowered the flannel cloth filter in his left hand, slowly rotating his wrist as he trickled water onto the grounds, starting in the center and moving slowly outward in a circle. 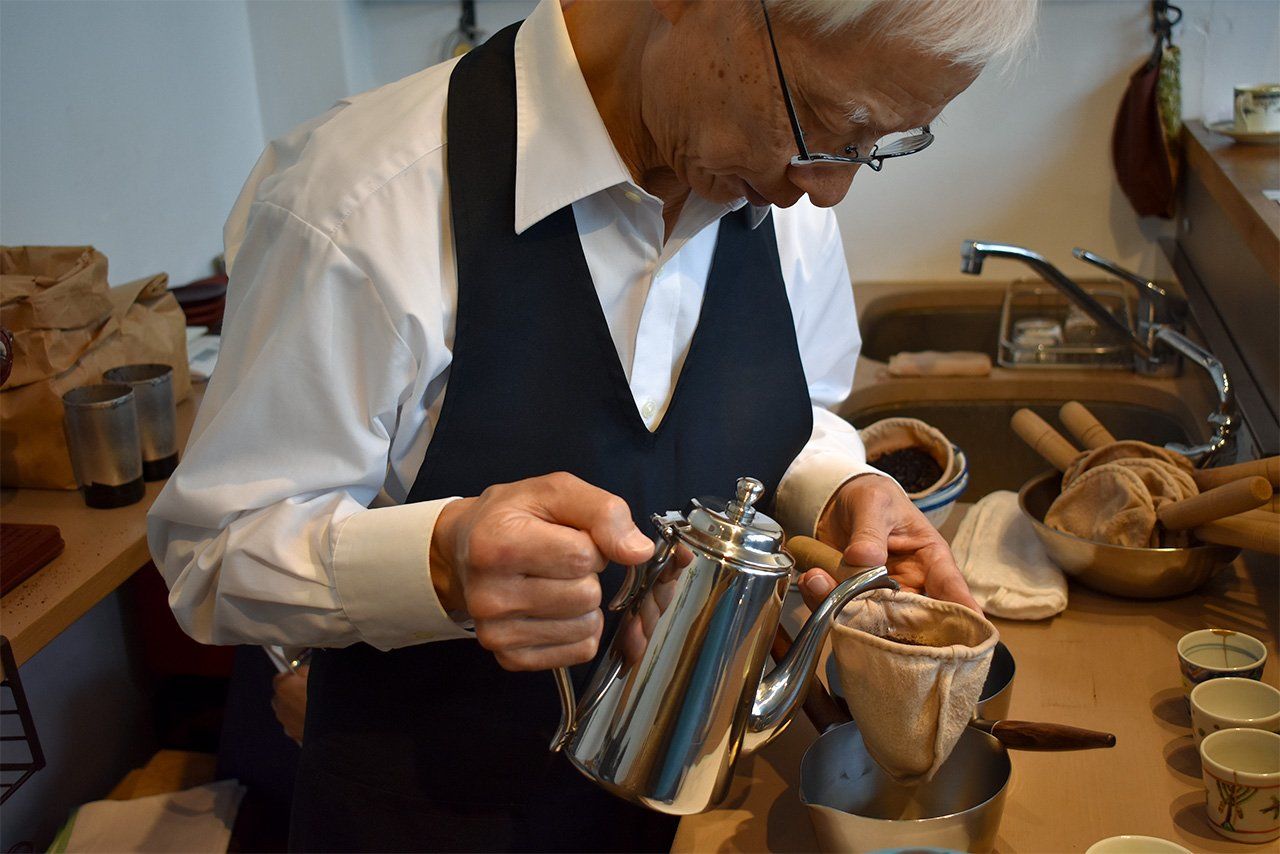 Daibō prepares a cup of coffee during the Omotesandō event.

As Daibō stood and poured, his efficient movements had an austere beauty; his experience, technique, and knowledge built over many years culminating to serve his customers the very best coffee possible. Each cup took around five minutes to prepare, an impossibly long time in today’s hectic world. However, Daibō’s subtle motions and the care paid to each small detail had a soothing, restorative effect on the observer. The first sip of the freshly brewed coffee brought bitterness to the tongue together with a subtle sweetness, producing a complex but delicate warmth that slowly spreads throughout the body. 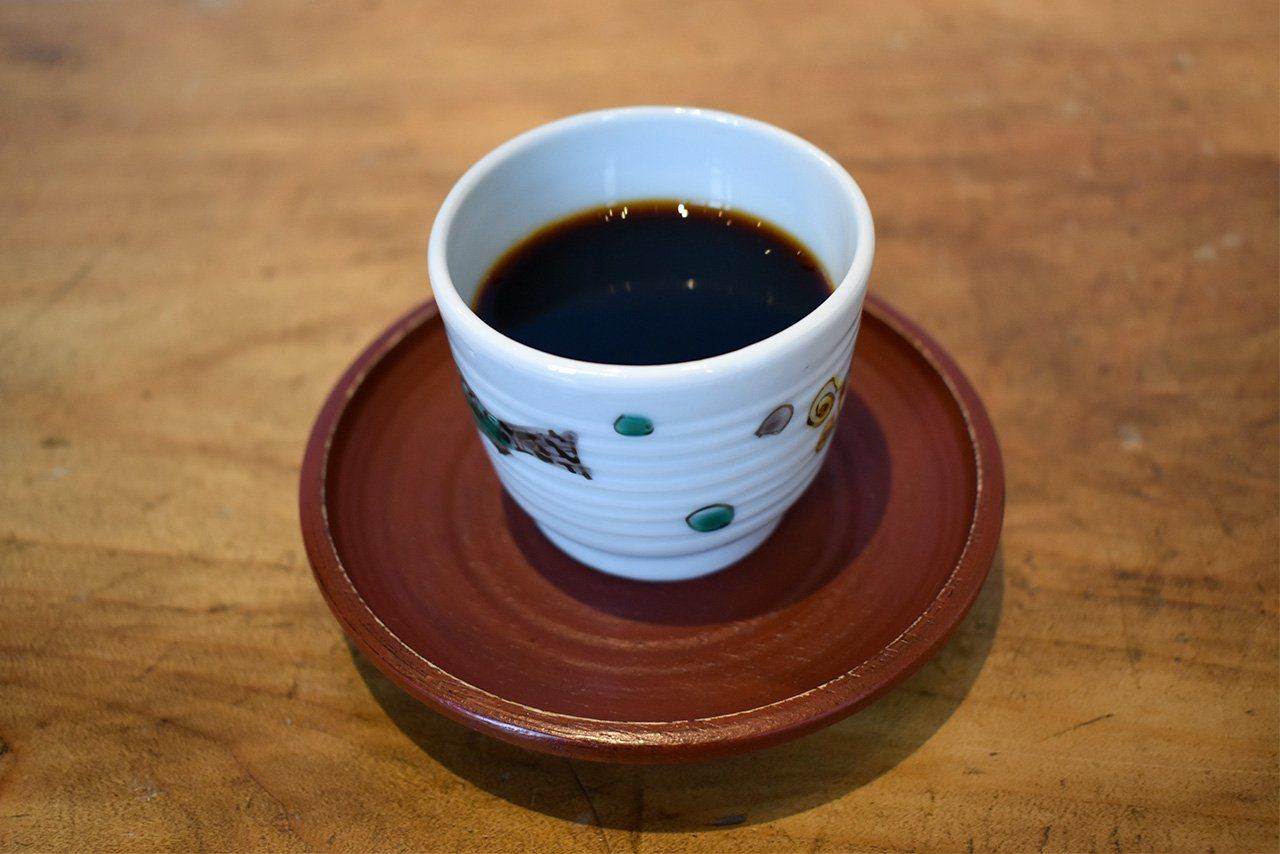 Daibō uses 25 grams of beans for each cup—more than double the typical amount—and serves his brew in a 50 cc demitasse.

An Infectious Atmosphere of Seriousness

Although the shop has been closed for five years, Daibō still uses his hand roaster at home, albeit not every day. The counter that used to be the centerpiece of his Omotesandō cafe now adorns his private coffee room at home, where he entertains friends. He kindly welcomed us into his sanctum for a chat about the old days, the atmosphere eerily reminiscent of the former coffee shop, with its ikebana arrangements and the soothing sound of vinyl jazz records.

”I wanted to make the café a place where people could remove their armor, put down their defenses, and relax—just be themselves.” And that meant that the coffee needed to be excellent. “There’s something about a good cup of coffee that helps people to unwind,” he says.

Daibō emphasizes the completeness of the coffee experience. ”When I stand behind the counter, concentrating and carefully watching every drip, I truly become myself. I think that rubbed off on the customers, allowing them to relax and be themselves too. The respect for the brewing process and deep concentration was infectious.” 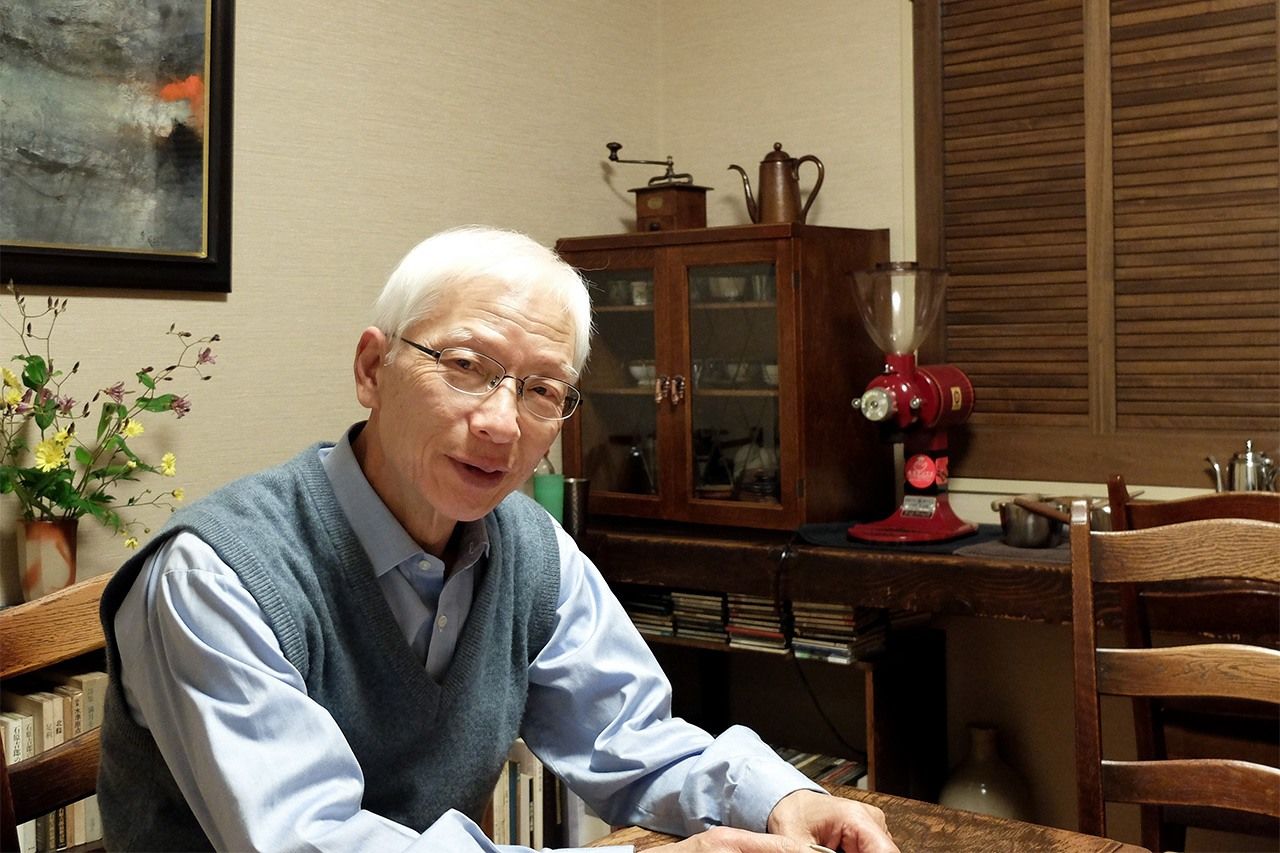 Daibō in his coffee room at home

Daibō recounts the story a teenage girl with hair dyed bright yellow who entered the shop alone one day. She sat down at the counter as soon as the shop opened at nine in the morning, drank a single cup of coffee, and then sat silently, staring down glumly at the counter. Daibō decided to let her be and went on preparing coffee for his other customers.

Around four hours later, she finally spoke, telling Daibō the she had run away from home the day before and dyed her hair. She said that watching him make coffee had helped calm her and that she now thought she would go home.

Daibō agreed that returning was probably for the best and advised her that if she really wanted to leave home, she should at least go back and talk it over with her parents first.

”She must have been wrapped up in her own thoughts all that time,” he recalls. “I think when we stop and take a moment out from life to relax with a cup of coffee, we’re really getting a taste of where we are in our lives. As well as tasting the enjoying the flavor of the coffee, we are savoring the condition of our lives and our inner selves at that particular moment. When I’m concentrating on making coffee, I’m totally in the moment, and somehow that act naturally creates an openness between me and the customer. A strange kind of relationship comes into being.”

Daibō explains that as people go about their busy lives, they need a place to pause and take stock; to think over where they are and ponder where they are going. “There are all kinds of setting where people can take time to reflect,” he contends. “I’ve always thought that a coffee shop should fulfil that function in people’s lives.”

Daibō’s former coffee shop was located on the second floor of a multi-use tenant building. Approaching by a dark, narrow staircase, customers pushed back the heavy door to the establishment and were greeted by seasonal flower arrangements, the only splash of color in an otherwise dark interior. Inside was a peaceful refuge from the roar of the city. Often the only sound was a jazz record playing quietly in the background, and the entire space was permeated by the deep aroma of coffee.

At seven each morning, Daibō would start roasting beans in his hand-driven machine, turning the handle for three hours—sometimes more when the shop was particularly busy. When the shop opened at nine, he would continue to roast the beans in front of customers as he prepared cups of coffee. Some regular patrons used to joke that if they popped in for a quick break from work, the strong aroma of coffee clung to their clothing, announcing to colleagues where they had been.

Daibō offered his dark-roasted blend in five different brewing ratios ranging from 25 grams of coffee in 50 cc of water to 15 grams in 150 cc. No matter the balance of water and grounds, though, he served a luxurious cup of coffee compared to typical blends.

Daibō would rarely speak when he was making coffee. Not that he was grumpy or unwelcoming, but he preferred to concentrate on dripping the water onto the grounds. When a customer entered the shop, he would turn his gaze toward the new arrival and offer a few quiet words of welcome before letting them settle into the calm atmosphere to refresh and revive from the hustle and bustle of the city. 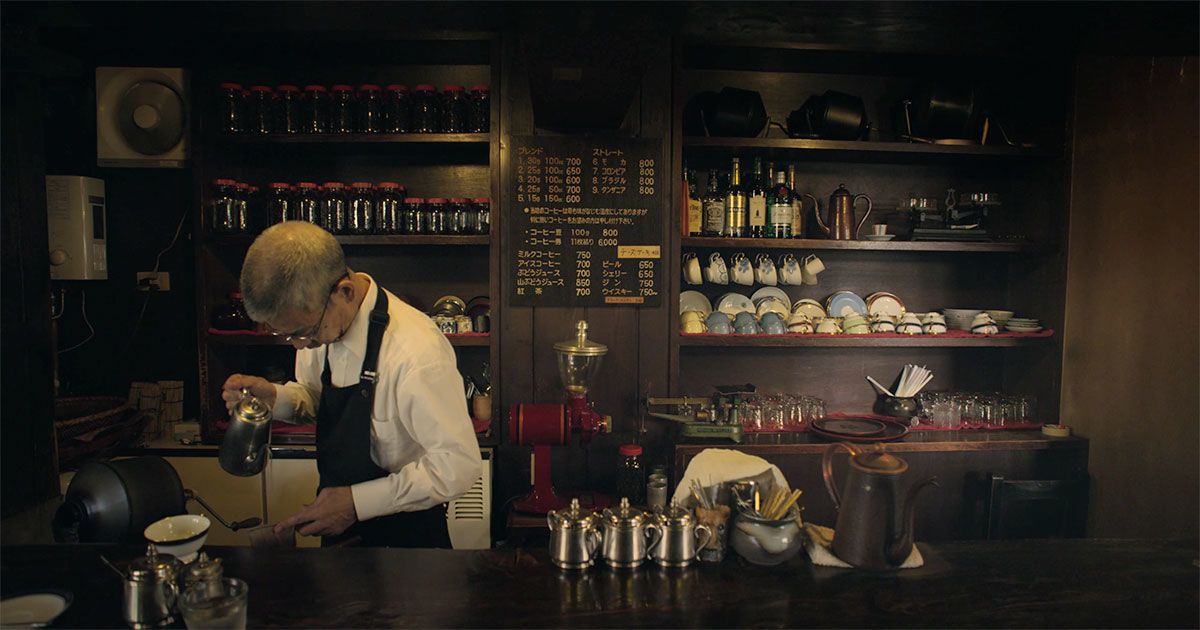 The old Daibō Kōhīten from the 2014 A Film About Coffee. (© Avocados and Coconuts)

The Inspiration for Third Wave Coffee

In spring 2015, Blue Bottle Coffee, a San Francisco-based chain of specialty cafes, opened its first Tokyo branch in Kiyosumi Shirakawa. Although the business does use some machines, its innovative approach to preparing deep-roast specialty coffees a single cup at a time became a phenomenon in the United States and helped bring about what is known as “third wave” coffee. The new style captured the imagination of fashion-sensitive young people and also became a hit with connoisseurs interested in coffees with distinct characters. Back in 2007, Blue Bottle founder James Freeman visited many of Japan’s best-known coffee shops and was taken aback by the hand-drip style of preparing coffee. He introduced the technique in his cafes, where it became a defining characteristics of the third wave style. One of his favorite shops while in Japan was Daibō’s cafe.

In 2014, Brandon Loper, an independent West Coast filmmaker made A Film About Coffee, a documentary that follows third wave trends and specialty coffees. A long, single-cut scene captures the interior of Daibō’s Omotesandō store in all its glory, preserving it for posterity.

Contemporary Tokyo is home to an amazing array of coffee shops. Foreign chains jostle for space alongside Japanese outlets. Convenience stores now even boast machines that dispense freshly brewed coffee for as little as ¥100. Coffee has become an indispensable part of urban life, with cafes serving as place to kill time, recuperate, or catch up on business emails.

Although Daibō’s coffee shop is no more, he himself is still going strong. He frequently travels around Japan to lecture on roasting and brewing techniques or to star at pop-up stores. His workshops for coffee devotees and operators of specialist stores always sell out almost immediately, proof of the continued influence of Daibō’s distinct approach to coffee.

(Originally published in Japanese. Banner photo: Daibō Katsuji and his wife, Keiko prepare coffee at the Sanyōdō bookshop in Omotesandō. All photos by Doi Emi unless otherwise noted.)