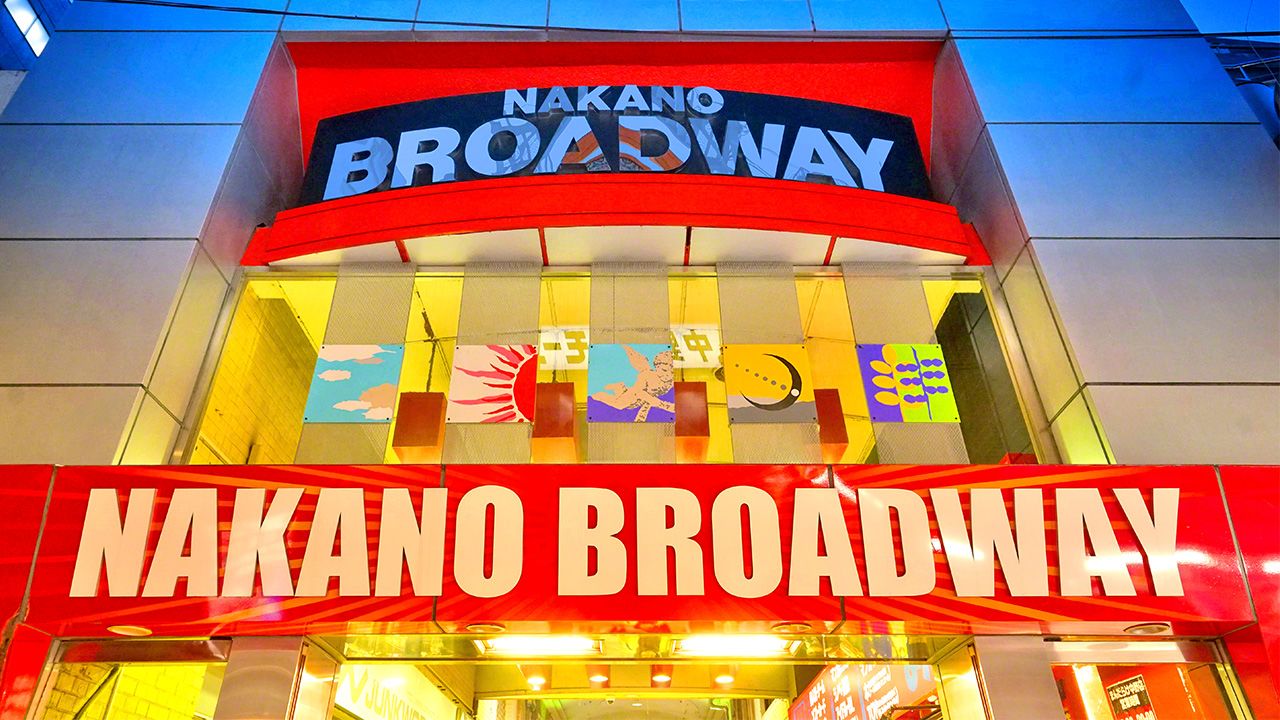 Economy Society Culture Anime Aug 18, 2022
At the end of the Nakano Sun Mall shopping arcade outside of JR Nakano Station can be found a holy ground for otaku: Nakano Broadway. Packed with stores selling anime figurines and other ephemera, it even attracts fans who make pilgrimages from abroad. An exploration of the past, present, and future of this iconic Tokyo shopping space.

From Success to Shutters

The year 2022 marked the fifty-sixth anniversary of the opening of Nakano Broadway. A long shopping promenade called Sun Mall extends from the north exit of JR Nakano Station; Nakano Broadway, a 10-story building with three basement levels, sits near the north end of this arcade. The fifth through tenth floors are residential, and residents have access to a rooftop pool, a playground, and a garden plot.

The bottommost two floors are mechanical facilities, but the first basement floor through the fourth floor are jam-packed with a huge variety of shops—as many as 350 tiny outlets. The number isn’t precisely known, for the turnover of shops is constant.

When Nakano Broadway opened in 1966, it was touted as “the greatest building in Asia.” It was at the forefront of a boom for luxury residential high-rises, and its retail levels were home to classy boutiques. Initial residents included the singer Sawada Kenji and the actor-turned-politician Aoshima Yukio. But a decade after its debut, the complex found itself overshadowed by newer shopping centers and malls erected elsewhere along the Chūō line, in neighborhoods like Shinjuku, Ogikubo, and Kichijōji. As it lost competitiveness to these newcomers, retailers fled. By the dawn of the 1980s, many of its shops were empty, making it what is known in Japanese as a “shuttered shopping street.”

An Unlikely Savior and a Nineties Rally

Amid Nakano Broadway’s sinking fortunes, a used bookseller appeared on the second floor in 1980 in a tiny spot just some 7 square meters in size. It was called Mandarake, for it specialized in handling used manga. It was run by a man named Furukawa Masuzō, then 30 years old.

Two years after opening his first shop, Furukawa leased another on the north side of the third floor, then yet another facing the floor’s main corridor. He opened a Ladies Kan (“Ladies Space”) specializing in girls’ manga, anime, and associated merchandise, then a Mania Kan (“Mania Space”) dealing in dōjinshi fanzines and rare books from the pre- and postwar eras. These were followed by Daiyogen (“Great Prophecy”), which specialized in the occult and paranormal, and Special Kan (“Special Space”), which handled all sorts of toys, “garage kit” scale models, CDs, and laserdiscs of anime and live-action hero shows. Mandarake shops continued to proliferate through the empty spaces in the shopping complex; today, 35 affiliated shops operate on floors one through four. 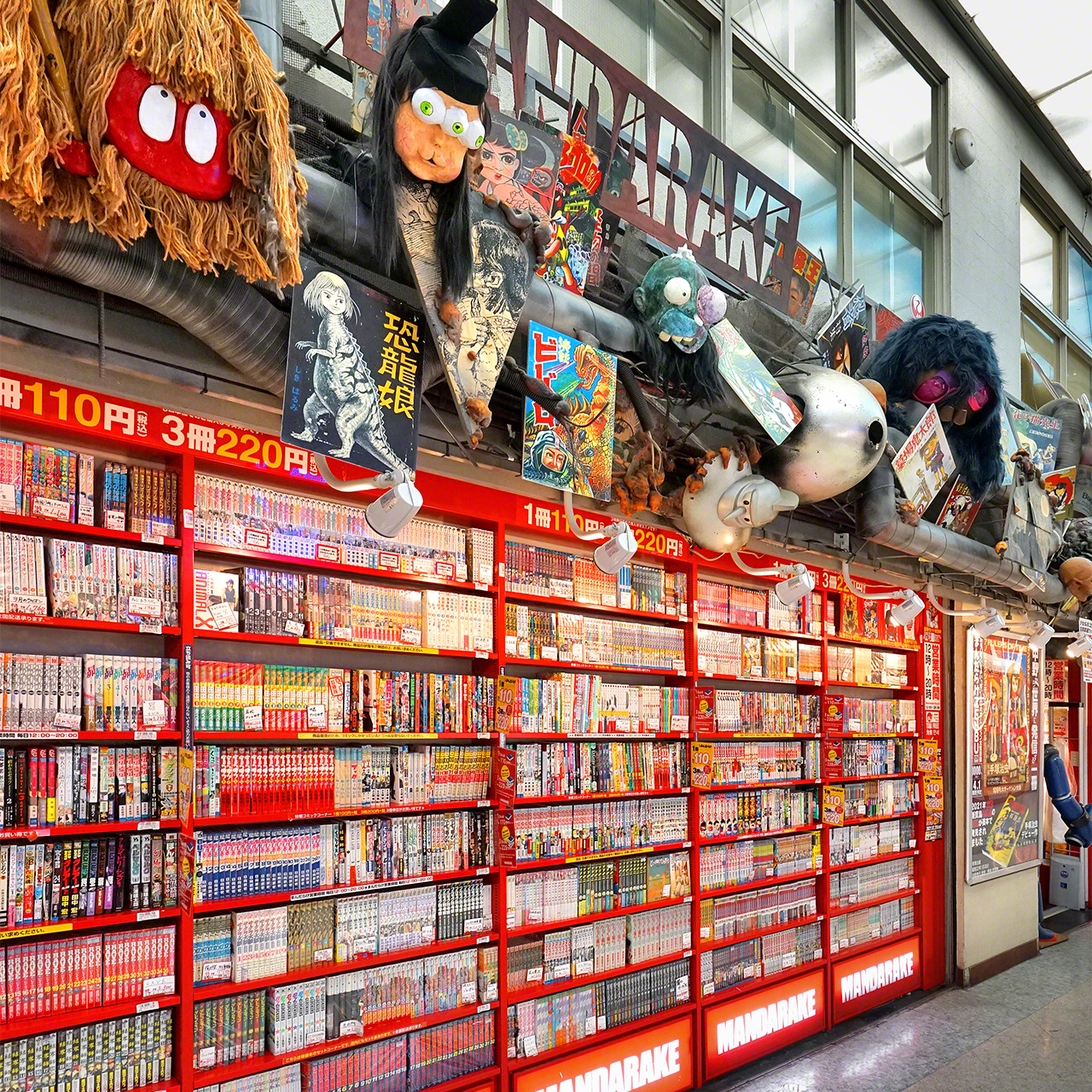 Mandarake Honten (“Headquarters”), on the third floor, boasts an impressive array of manga for boys and young adults.

Mandarake’s success drew in other specialty purveyors from around Japan, who supported niche fandoms for manga and anime, idol singers, movies, tokusatsu live-action special-effects series, pro wrestling, baseball, and more. In this way, a humble used bookstore opened in 1980 turned into the catalyst that triggered a pop-cultural explosion in the 1990s, ushering in Nakano Broadway’s evolution into a holy ground of subculture. 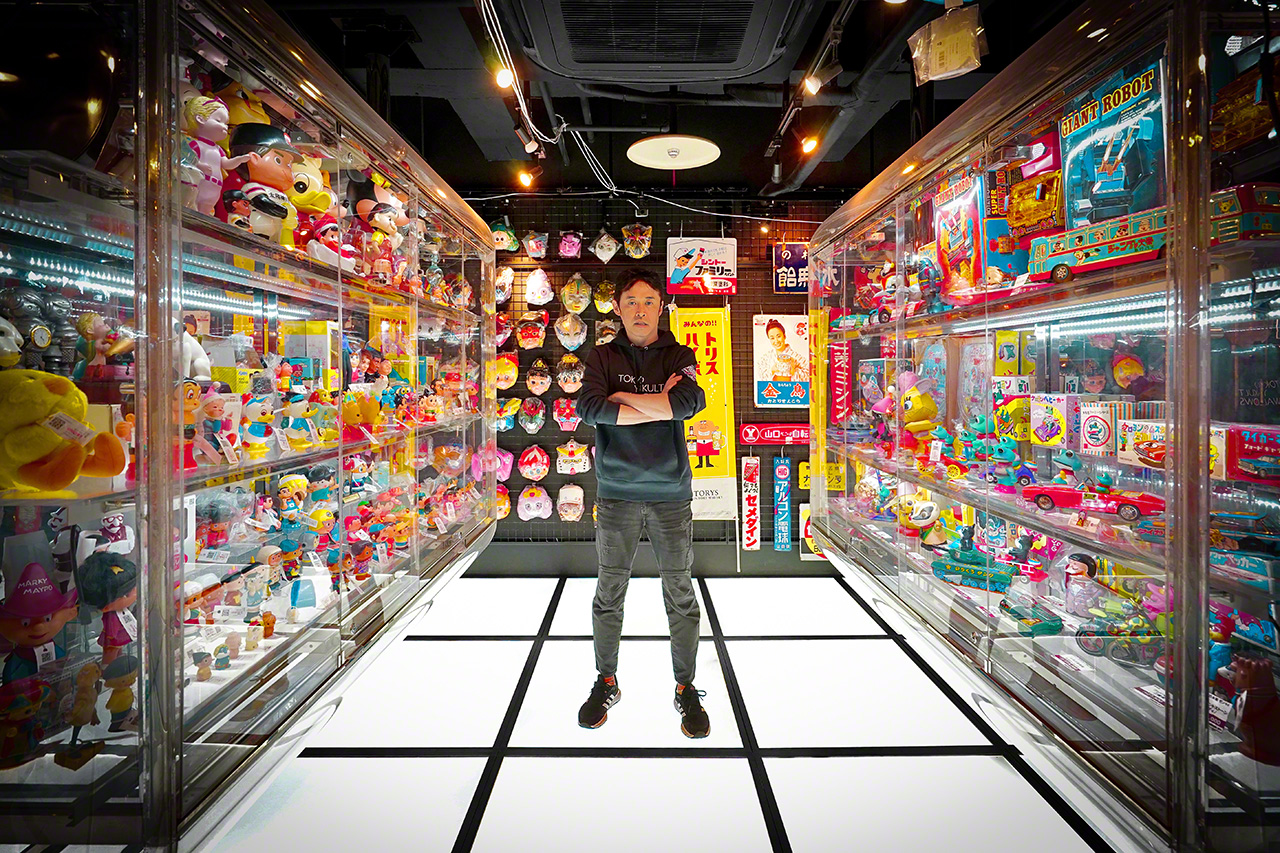 The author in the fourth floor Mandarake Hen’ya (“Weirdos”), where advertising mascots and postwar/retro products are the mainstay.

Businesses Fueled by Youth and Passion

There’s a reason why such a dramatic transformation played out in the corridors of Nakano Broadway: murky ownership issues, which were already growing complicated as far back as the dawn of the 1980s. Retail spaces were initially only offered for sale, but as the original owners began selling their properties, the ownership grew increasingly diverse. As new owners then began subletting to new tenants, it quickly became more and more difficult, and eventually impossible, to manage them all.

But in this managerial crisis, young shopkeepers saw opportunity. The cramped shop spaces meant rents were low. This attracted a new breed of young entrepreneurs who lacked capital but felt they could compete through the power of their own passions. Their numbers and presence added a rich new depth to Nakano Broadway’s retail environment.

This is what gives Nakano Broadway its distinctive feel, so different from the shopping centers constructed by major developers in downtown areas like Shinjuku and Shibuya. The idea that anyone could launch a business there with little to no expectations promoted a retail environment where a sort of controlled chaos reigned. It still reigns today, seen in how there is no consensus about how to renovate or revitalize this now creaky old building, with plans proposed and postponed over and over again.

In the 1990s, Nakano Broadway gained attention as a place where highly focused fans could gather large amounts of information about their hobbies and interests, making it a sort of holy ground for otaku―hyperfans of pop culture. The arrival of the internet at the turn of the millennium accelerated this trend. In the words of the writer Watanabe Kōji, who lives in the area:

“The spread of the internet transformed Broadway into a virtual mecca for otaku around the world, drawing them in from America, from England, from France, from China, from Mexico, from Iran, from all over. Once they learned of its existence from the net, they knew they had to visit. That the object of their passion existed as an actual physical building made it all the more compelling.”

The number of foreign faces in Nakano Broadway grew exponentially during this time.

In the 2010s, Kaikai Kiki, the company run by famed pop artist Murakami Takashi, opened galleries and cafes in Nakano Broadway. In May of 2016, Murakami moved his business operations there, to a space called Office Zingaro Yokochō. In 2018, he opened Tonari no Zingaro, his official retail shop. It carries a variety of products designed by Kaikai Kiki that are only available here, such as art prints, posters, apparel, and more. When new items are released, queues extending down several floors aren’t uncommon to see. And it goes without saying that many of these customers are foreign. 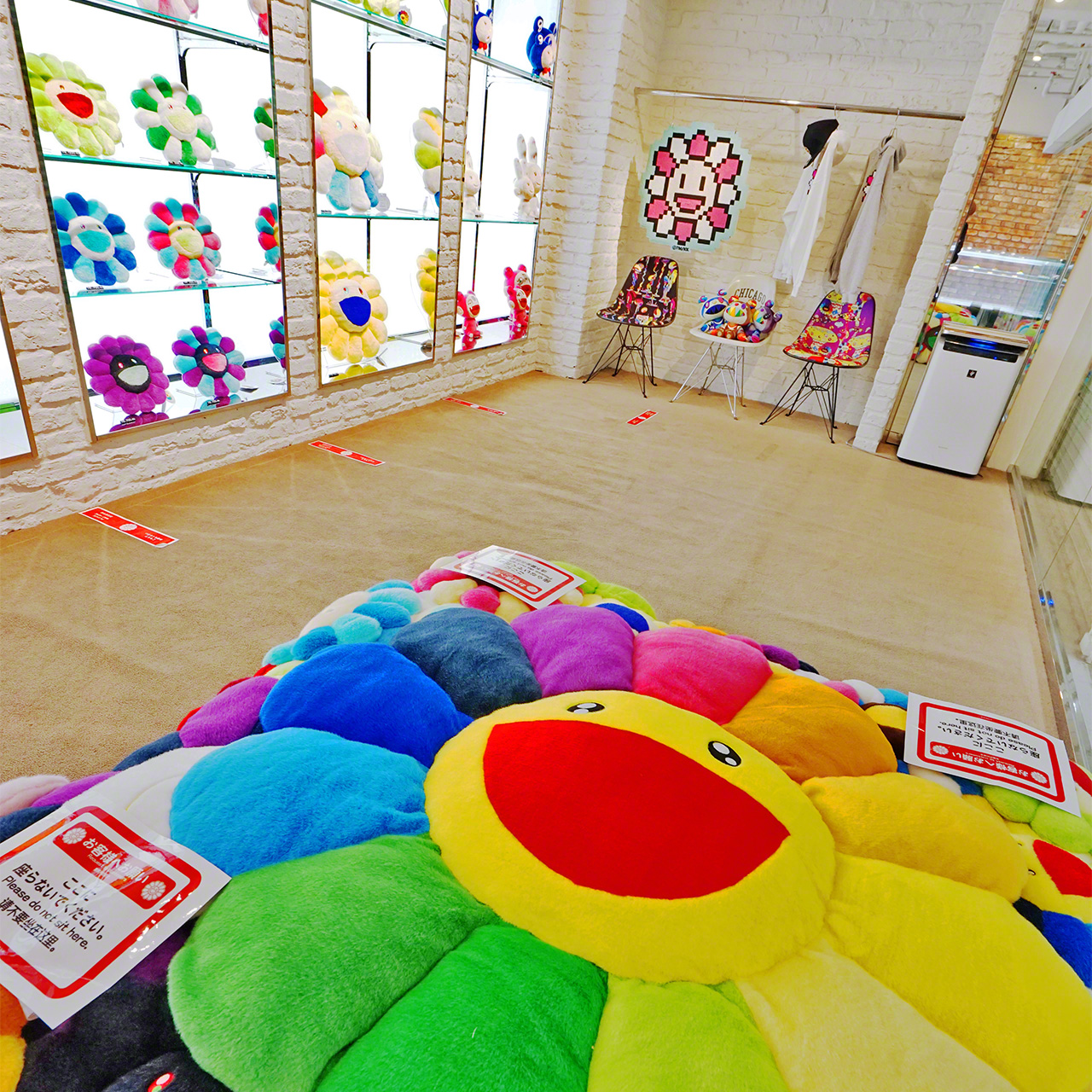 This reflects a bigger trend in tourism. The number of foreign tourists arriving in Japan topped 10 million in 2013, doubled to 20 million by 2015, and cleared the 31 million mark in 2018. Foreign fans had long visited Nakano Broadway in search of otaku culture, but their numbers grew dramatically. And the facility wholeheartedly welcomed them. English, Chinese, and Korean signage appeared, as did informational pamphlets designed for foreign visitors.

But the arrival of COVID-19 changed everything. The nearly 32 million foreign visitors to Japan in 2019 dropped to roughly 4 million in 2020 and then to just 245,000 in 2021. The number of overseas tourists in search of merchandise from their favorite anime and manga plunged correspondingly, turning Nakano Broadway into a virtual ghost town. For the first time, you could really sense the age of the place.

The state of emergency has been lifted, and tourists are starting to trickle back into the country from abroad. A trend for shops dealing in luxury watches continues, but smaller specialty shops continue to prosper as well. As expected for a 56-year-old building, there are concerns over earthquake countermeasures, and wiring, plumbing, and other maintenance issues proliferate. Yet things feel as though they are finally starting to return to a semblance of pre-COVID normalcy. In the more than half century since its construction, Nakano Broadway, holy ground for otaku, continues to evolve. What form might it take in the years to come? 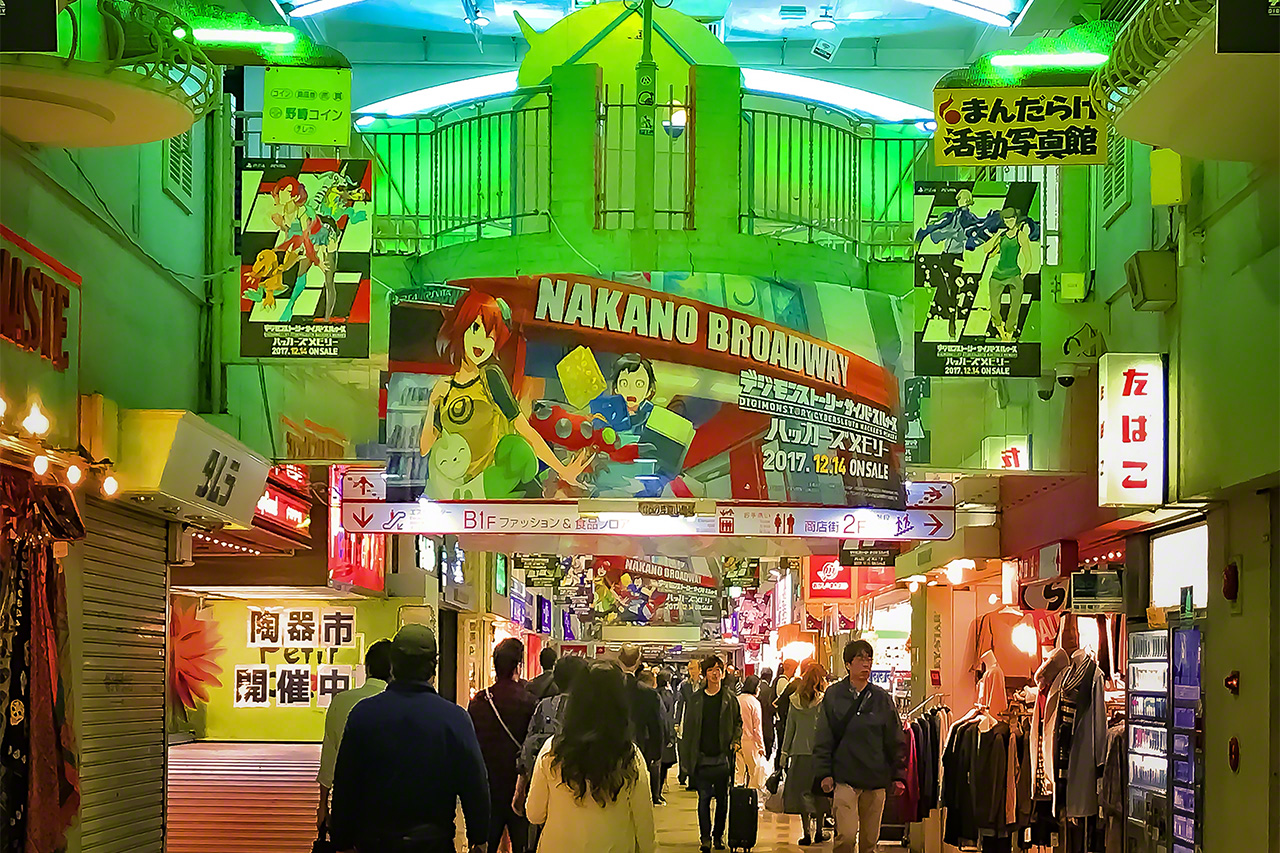 The first floor of Nakano Broadway.