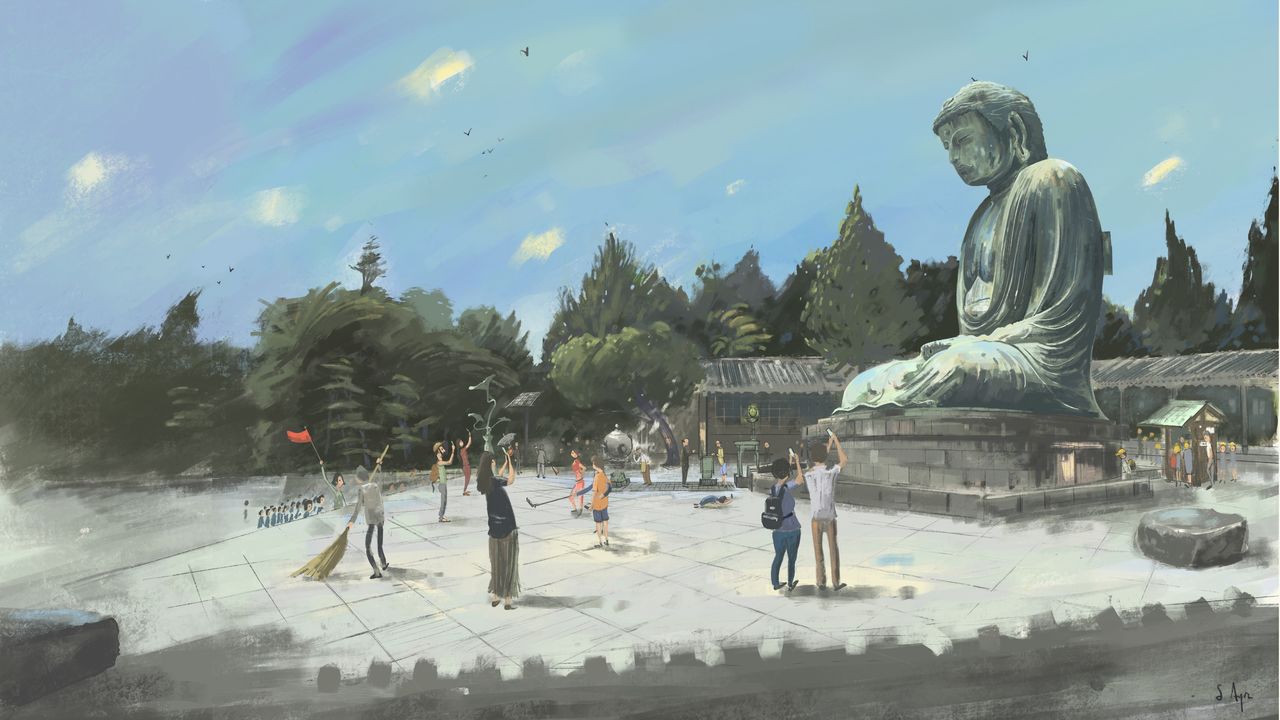 There the Great Buddha of Kamakura sits, as he has done for hundreds of years, with a gentle smile on his face. He’s the same green as the Statue of Liberty but, unlike her, is seated—and not standing for anything. Despite the icy snows and scorching suns over the years, he still sits there unperturbed. He’s lost his gold covering, but that doesn’t bother him either. He still has a little left on his cheek, to remind him of those golden days.

You can even walk inside him to see how he was welded together. Though he reveals his secrets in this manner, the place still feels magical.

I painted the Great Buddha of Kamakura over two days in summer 2018. It seemed right to go early and stay all day until closing time. The Great Buddha has been doing that every day for the past 700 plus years, after all. It’s worth arriving at the temple (Kōtokuin) when the doors first open. There’s a kind of hush in the air at that time of the morning, and you’re able to enjoy the statue without hundreds of others striking poses and jostling to snap a choice shot of him.

Having said that, watching how people react to the Great Buddha is half of the enjoyment of visiting. Some people mimic his pose and facial expression, while others strike a seventies-disco, John-Travolta pose. Others, mostly Japanese people, become still, waft some smoke from the incense onto themselves, and then say a little prayer.

Kids have the most creative reactions to the Great Buddha. There are often gaggles of schoolchildren visiting the temple, so there are plenty of opportunities to hear and see them react. I overheard some of them passionately arguing about whether the Great Buddha was alive or not, with convincing arguments from both sides. And I heard some others debating whether it was actually possible to go inside the Great Buddha. (One side felt that it was impossible because it was inconceivable for there to be a room inside a person.)

Before leaving, I overheard an elderly lady, at least in her eighties, talking about last seeing the Great Buddha when she was an elementary school student. It got me thinking that perhaps she could have been the child in a kimono in Kawase Hasui’s woodblock print of the statue. I imagine that many of the schoolchildren I saw there will be back in 70 years’ time to revisit him, just like the elderly lady. 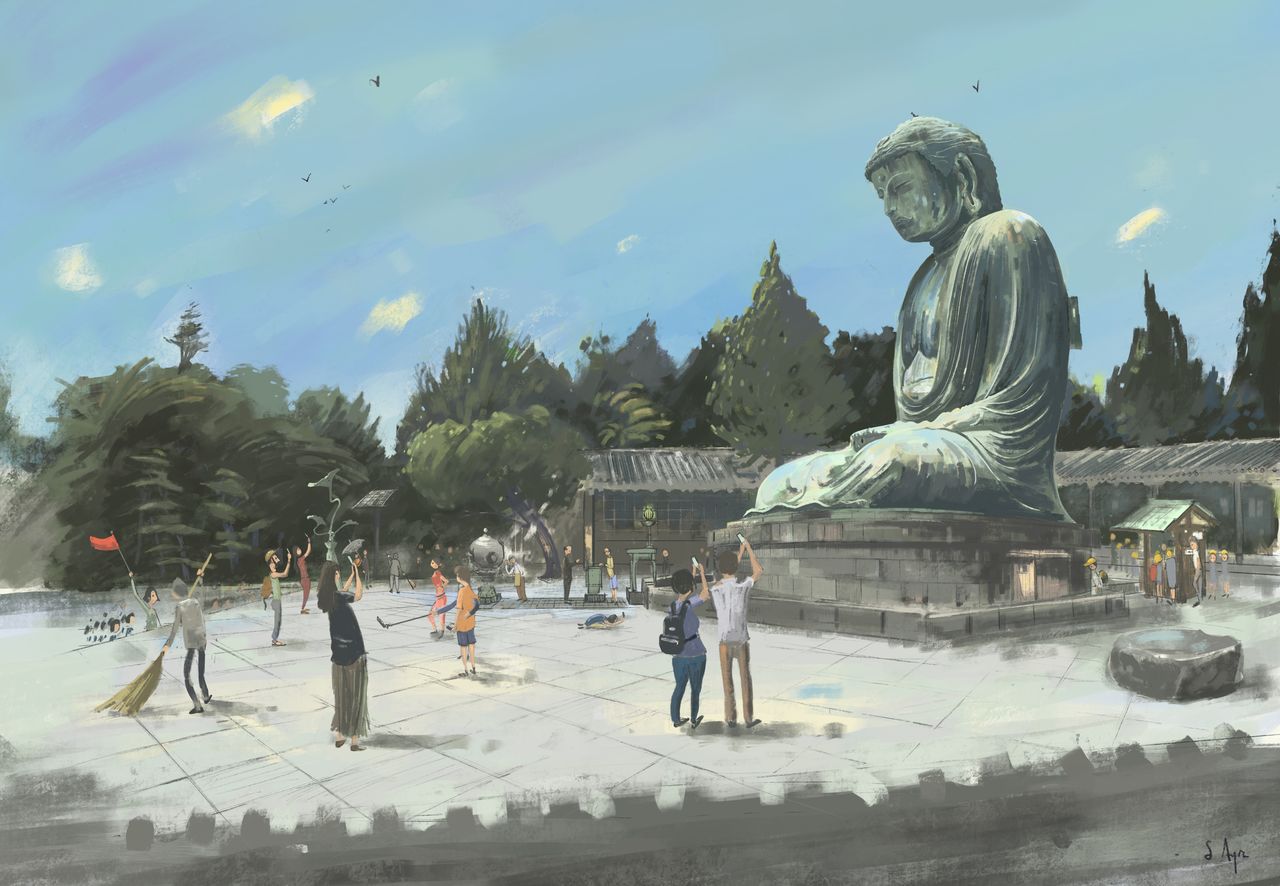 The Great Buddha of Kamakura.

The gentle smile of the Great Buddha of Nara hides much. In the past millennium, his house twice burned to cinders, war raged around his temple spilling much blood, and his entire head and hands were replaced. But he still smiles, and like the Ship of Theseus, he remains the same Great Buddha.

The structure that houses him, the Great Buddha Hall, is a sight to behold. It’s a real treat for the eyes. A forest’s worth of wood, all crafted with clever hands, holds up the immense roof. And the gold embellishments (which look like upside-down Ls) on each end of the roof look tiny from afar, but they’re gargantuan.

Why is the Great Buddha here? That question is answered by the approach to the hall. Its stone slabs are from India, China, Korea, and Japan, indicating Buddhism’s route to this country. When visiting this temple, I like to imagine the Great Buddha trekking across those distant lands before arriving in Japan and sitting down in Nara to take a long-earned rest.

Upon reaching the hall’s doors, visitors first encounter the Great Buddha. A heartfelt Dekai! (So huge!) is a common response from Japanese visitors. If you stand at the doorway, you’ll likely hear that word here and there.

For someone so still and calm, the Great Buddha generates much reaction and emotion in his visitors. Some prostrate themselves, foreheads right down to the stone floor. Many try to copy the Great Buddha’s hand positions whilst having their photos taken (often with their own versions of the pose, perhaps sending out unintended Buddhist messages). And the elderly invariably pray.

Kids who visit really let their imaginations fly. As I sat drawing in the summer of 2020, a couple of elementary school kids excitedly debated about which sport the Great Buddha would be good at. (Apparently he should be a baseball catcher.) One little girl thought that the gold embellishments on the roof were the Buddha’s shoes. And other school kids were debating why he had permed hair like their grandmothers’.

The painting depicts the Great Buddha when few people were around. A child had run up the steps ahead of his parents to see what all the fuss was about. When he saw the Great Buddha for the first time, he stood transfixed. I bet the boy will be back again when he’s an old man.

At the time the Great Buddha of Nara was first created, just a few generations after the fall of ancient Rome and its giant statues, an Indian monk symbolically imbued him with life by painting in his eyes. I considered doing the same with my painting to complete it. But, after spending so much time in the temple, I realized that any attempt to depict the scene would leave out so much—the carpentry’s elegance, the changing light, the cavernous feel, the monks’ chitter chatter. So it felt fitting to leave my painting of the Great Buddha of Nara “incomplete” by leaving his mysterious smile to the imagination of the viewer. 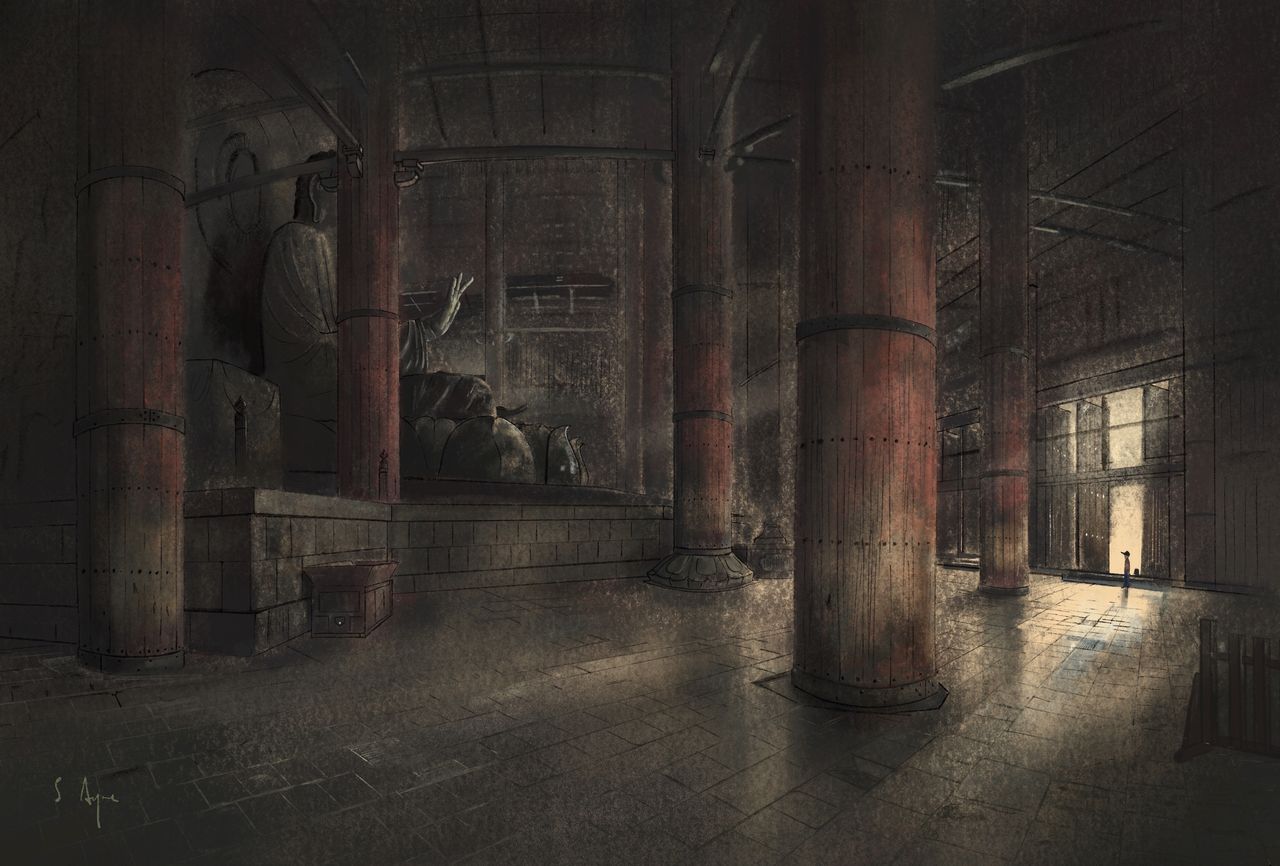 The Great Buddha of Nara