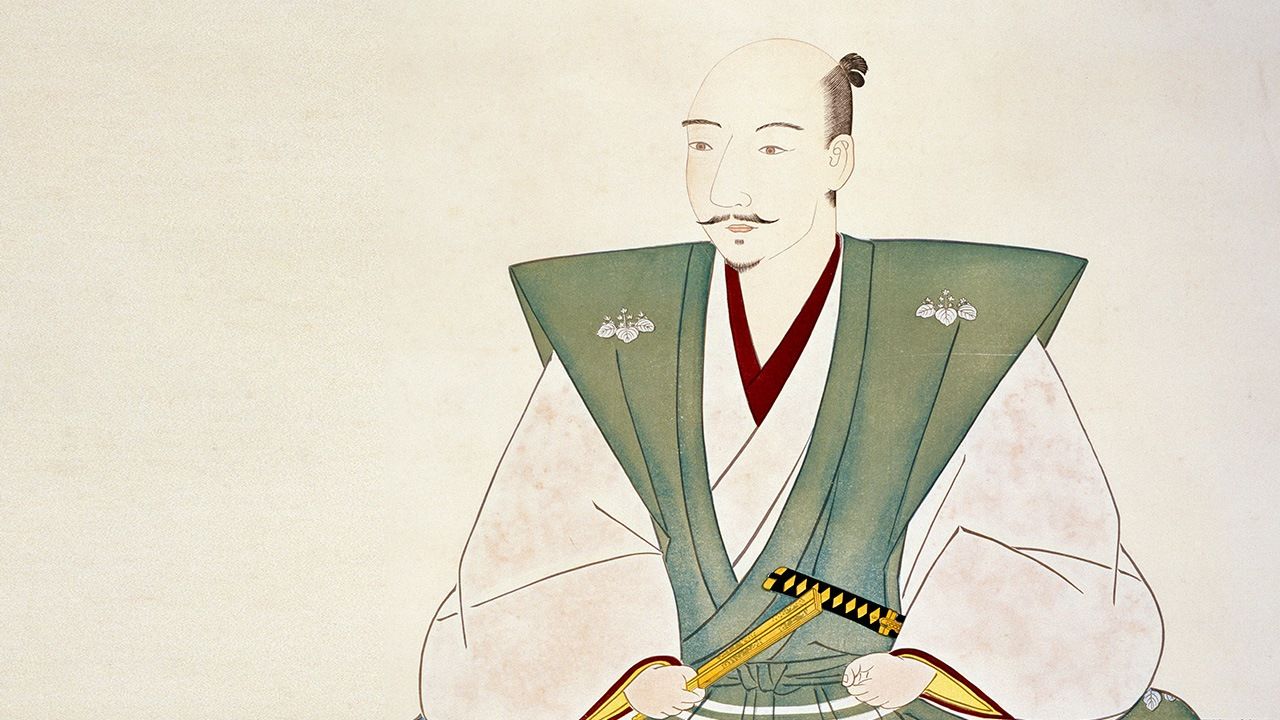 Oda Nobunaga and the Struggle to Unify Japan

History Jan 8, 2020
Warlord Oda Nobunaga came close to unifying the fractured state of Japan in the sixteenth century, but a sudden betrayal prevented him from finishing the task.

The World of the Warring States

Oda Nobunaga was born in 1534, in the middle of the Warring States period (1467–1568). The Ashikaga clan had established the Muromachi shogunate in 1338, but its control in the east of the country slipped when the 1454 assassination of a shogunal deputy at Kamakura sparked decades of regional conflict. In 1467, a dispute over the shogunal succession in Kyoto degenerated into open warfare. The Ōnin War dragged on for 11 years, by the end of which time the shogunate’s power was limited to just the province of Yamashiro (including Kyoto).

In the rest of the country, a number of daimyō established regional power to fill the vacuum. They introduced their own domain laws to control vassals and territory, which often ruled that both parties in any dispute could be punished. Private quarrels between vassals were not permitted, and the daimyō made rulings on any troubles that arose. The aim was to concentrate power in the daimyō, so as to achieve stability in the domain. Other common laws regulated marriage, restricted land sales, and forbade farmers from defaulting on taxes (in the form of rice or barley) or absconding en masse.

Daimyō sought to ascertain the value of their vassals’ land, which was used as a basis for taxation and requirements for military service. They also established hierarchical relationships between certain powerful vassals and lower-class samurai, in which the former were yorioya, or “surrogate parents,” to the latter. At times of war, these could form spear or musket units, which made possible infantry-centered group tactics. Farmers were pressed into service in battle as soldiers or to carry supplies—there was still no clear distinction between warriors and farmers at this time.

Building new rice fields and digging mines also contributed to domain economies. Iwami Ginzan Silver Mine—now a World Heritage Site in Shimane Prefecture—and other silver and gold mines were constructed around this time. Flood control and irrigation projects encouraged agricultural development. For example, one of the leading daimyō Takeda Shingen had a levee built to prevent flooding where two rivers came together in Kai Province.

This was the world into which Nobunaga was born as the oldest legitimate son of Oda Nobuhide in Owari Province (now Aichi Prefecture). He went on to rapidly amass power through his lifetime and almost succeeded in unifying the splintered state. Here I will follow his efforts to establish control over the realm as part of the wider history of Japan in the period. 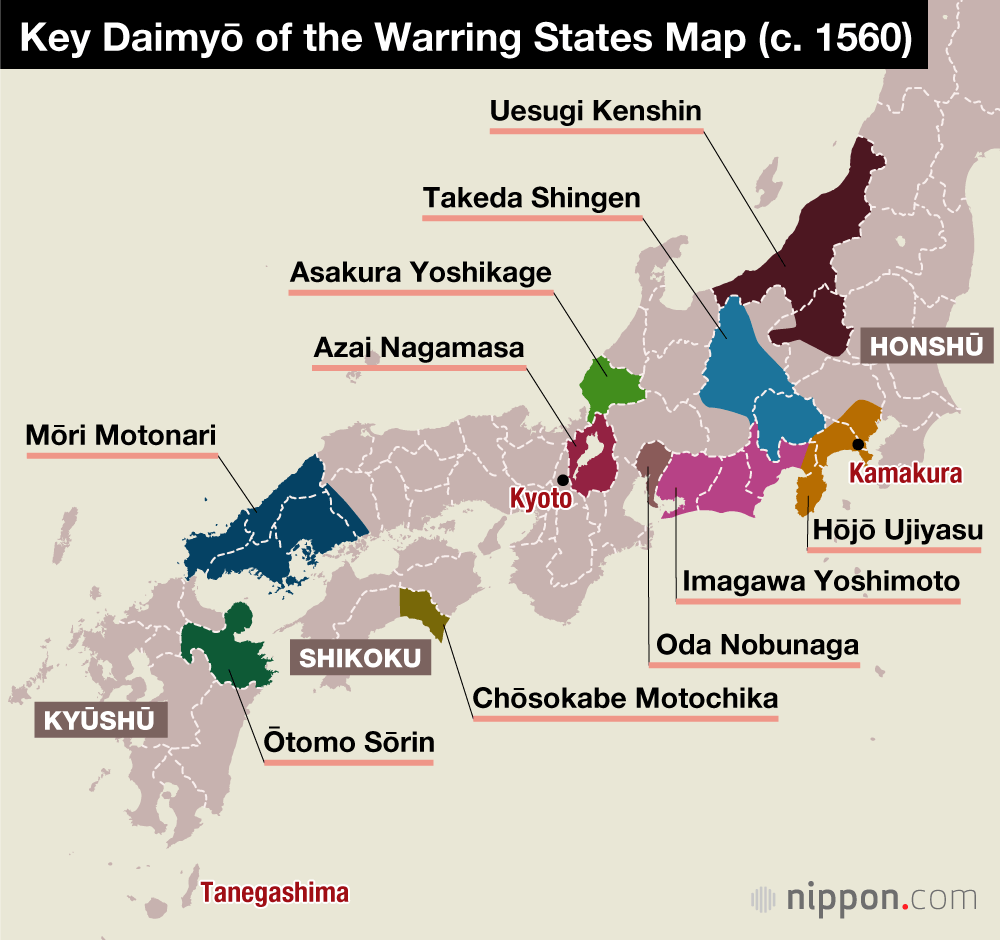 Takeda Shingen’s seigyū flood control device (left) and the area where they were used today. (Courtesy Kai Board of Education)

In 1560, Imagawa Yoshimoto of Suruga and Tōtōmi Provinces menaced Owari with a huge army, which has been estimated as comprising 40,000 warriors. The young Nobunaga, who had succeeded to his father, launched a shock attack with 2,000 soldiers on the army while it was still in camp, killing Imagawa and scattering the enemy. The stunning rout became known as the Battle of Okehazama. Nobunaga formed an alliance with Matsudaira Motoyasu (later Tokugawa Ieyasu) of Mikawa to secure his eastern border, and entered battle with Saitō Yoshitatsu of Mino, to the north. 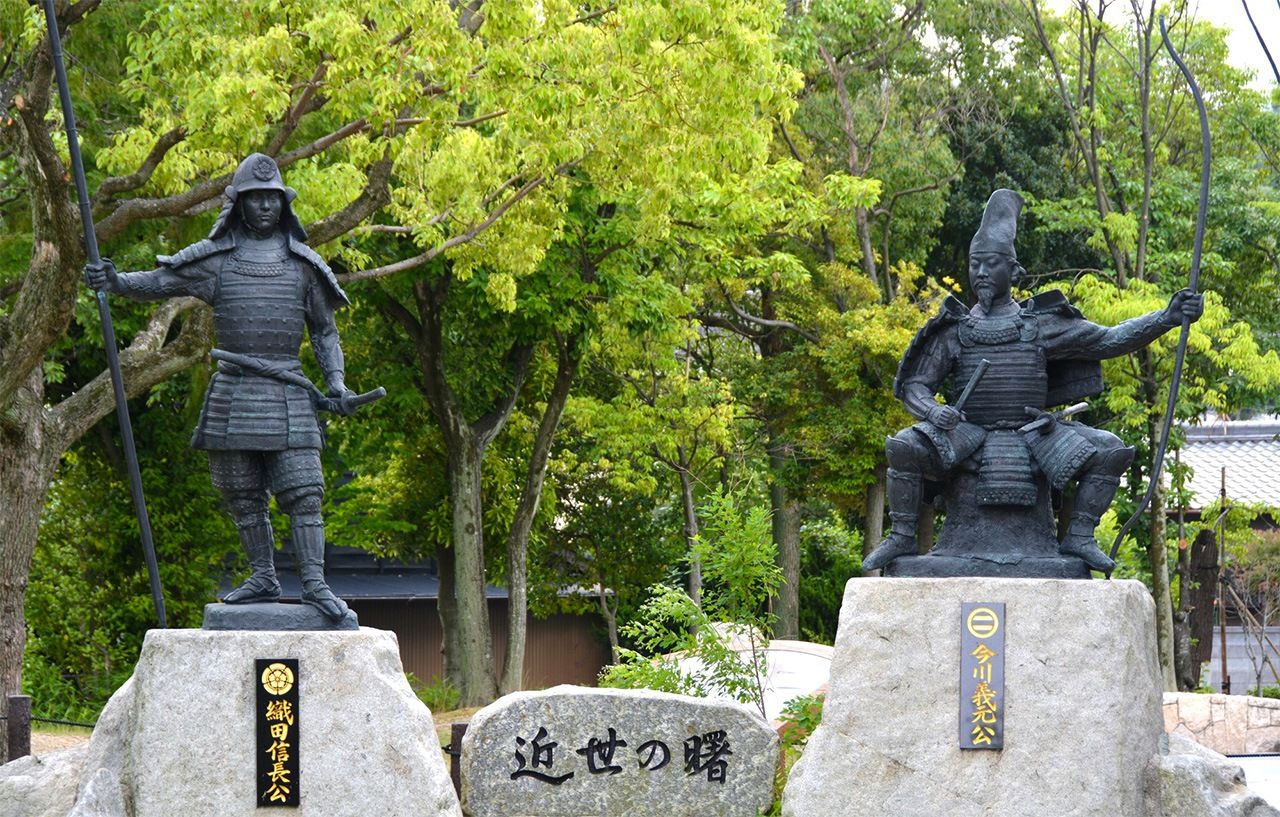 A memorial to the Battle of Okehazama in Toyoake, Aichi Prefecture. The two statues are of Oda Nobunaga (left) and Imagawa Yoshimoto. (© Pixta)

Around this time, other notable daimyō across the country rose to power. Mōri Motonari of Aki Province became a prominent leader in western Honshū, while Takeda Shingen of Kai and Uesugi Kenshin of Echigo repeatedly clashed as rivals further to the east. Hōjō Ujiyasu ruled over much of the Kantō region from his base at Odawara in Sagami. Ōtomo Sōrin of Bungo, meanwhile, controlled northern Kyūshū.

The Spread of Christianity

Sōrin was significant for his firm protection of Francis Xavier of the Society of Jesus, who he allowed to proselytize throughout his territory. As missionaries continued to arrive on the island, Christianity spread across Kyūshū. Europe had entered an Age of Discovery, and Portuguese and Spanish merchants and priests were on the move, looking for new markets and converts. By the sixteenth century, they had reached China and Southeast Asia. In 1543, the first Portuguese traders came ashore on the island of Tanegashima in Kyūshū, bringing muskets that were more advanced than the basic firearms in Japan at the time.

The Kyūshū daimyō allowed Christian missionary work so they could benefit from trade. Portuguese merchant ships would not come into harbor in the territory of daimyō who banned such activities. As the missionaries also worked on projects for social benefit, like building schools and hospitals, the number of Japanese Christians soared. Giving away food, such as beef dishes or castella and other Western-style cakes made with sugar and eggs, was also effective for encouraging conversions, as is clear from the condemnation of these acts by Buddhist priests of the time. 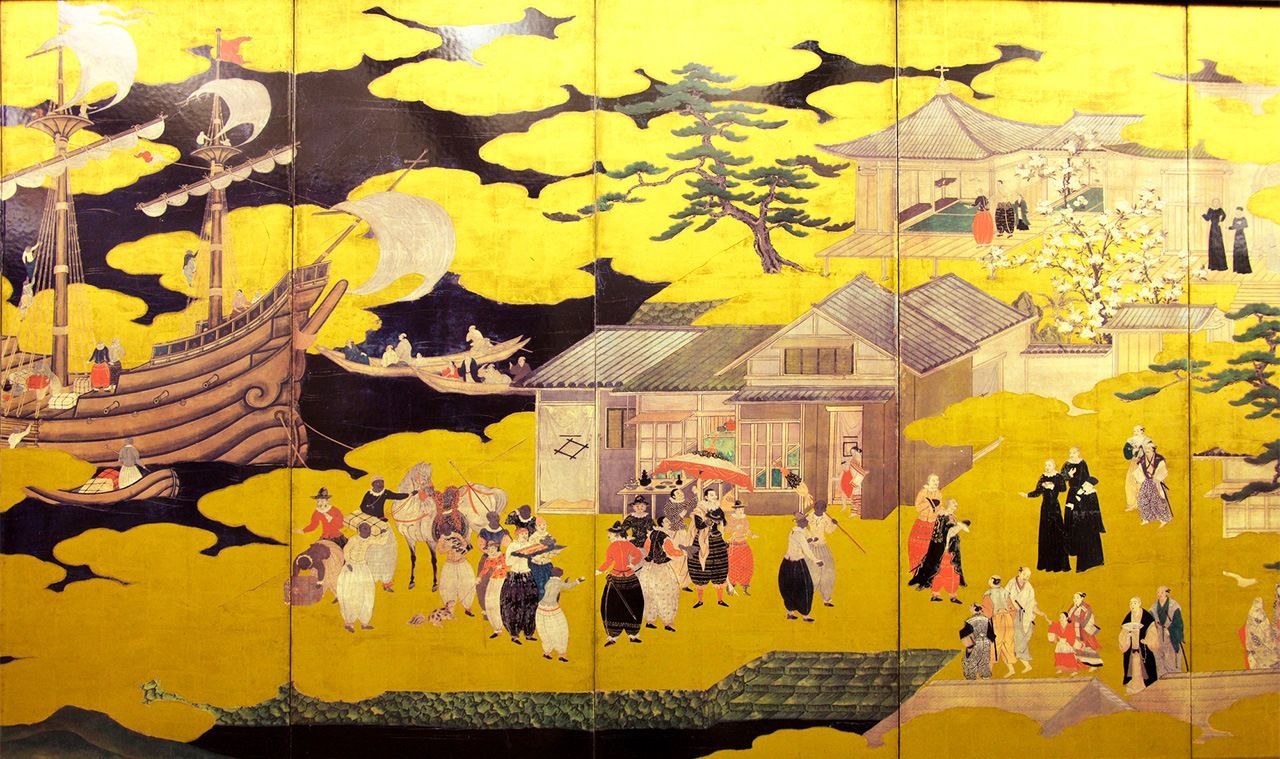 Detail of a folding screen showing a foreign ship in Japan. (© Paylessimages/Pixta)

In 1567, Nobunaga drove Saitō Tatsuoki (son of Yoshitatsu) into exile, conquering Mino and renaming the Saitō stronghold of Inabayama Castle as Gifu Castle. He made the settlement of Kanō below the castle a free market, breaking up the za, or monopolistic trade organizations, so that merchants could freely buy and sell. Reduced taxes, improved roads, and the abolition of toll barriers brought prosperity to Kanō. 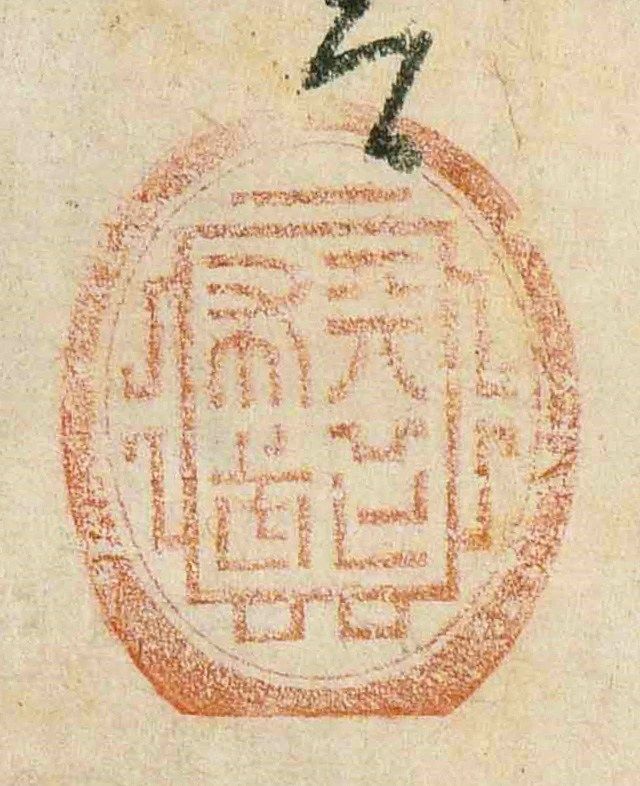 Around this time Nobunaga began using a seal with the phrase tenka fubu, which indicated his intention to unite the realm (tenka) of Japan by force. In 1568, he led an army into Kyoto and installed Ashikaga Yoshiaki as shōgun. Under the auspices of the Muromachi shogunate, he expanded his power around the capital. He also extended protection to Christianity, in part to curb Buddhist forces, including those at the temples of Ishiyama Honganji and Enryakuji. He invited visits from missionaries like the Portuguese Jesuit Luís Fróis, taking every opportunity to improve his knowledge of Western learning.

Discontented at Nobunaga’s growing power, Yoshiaki assembled a coalition of daimyō to surround and attempt to overthrow him. But Nobunaga had promoted talented but low-born deputies like Hashiba (later Toyotomi) Hideyoshi and Akechi Mitsuhide, who helped him to weather the crisis and steadily subdue these opposing forces. He defeated the warrior-monks at Enryakuji and burned the complex down, overthrew the daimyō Azai Nagamasa and Asakura Yoshikage, and set Ishiyama Honganji under total siege. In 1572, Takeda Shingen headed an army from Kai that won some victories against Nobunaga, but the next year he died of illness. Following this stroke of fortune, Nobunaga sent Yoshiaki into exile from Kyoto, effectively bringing an end to the Muromachi shogunate.

A Historic Battle for Firearms

After European-style muskets arrived at Tanegashima, demand for use in the constant warring of the era meant that locations like Kunitomo and Sakai became known for their production of these firearms. Yet, as they were only effective at a range of around 100 meters and it took time to get them ready to fire, they were seen as not particularly suited for the heat of battle. Nobunaga overturned this way of thinking.

In 1575, Nobunaga, allied with Ieyasu, fought with Takeda Katsuyori (son of Shingen) at the Battle of Nagashino. Nobunaga’s use of a large number of musketeers—thought to be around 3,000—resulted in the overpowering of the formidable Takeda army. This battle went down in Japanese history as the moment Nobunaga transformed the image of the musket from a weapon that was useless individually to one that was matchless when fired by many soldiers simultaneously. From this point, it played a major role in the combat of the period. 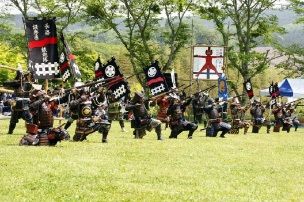 An annual reenactment of the Battle of Nagashino. (Courtesy Shinshiro Tourism Association)

The next year, Nobunaga established a new base at a site near Lake Biwa, where he began construction of Azuchi Castle with extensive stone walls. The central keep was more than 36 meters high with six stories above ground and one below. Although short-lived, Azuchi Castle became the prototype for a new generation of strongholds.

In 1580, Nobunaga finally won his 10-year conflict with Ishiyama Honganji, while Hideyoshi advanced against the Mōri forces in the west of Japan and another deputy, Shibata Katsuie, encroached into Uesugi territory. With the destruction of the Takeda family in Kai in the spring of 1582, it seemed Nobunaga was just a few years away from achieving his ambition of uniting the state. Yet on June 21—in an event known as the Honnōji Incident after the temple near Kyoto where Nobunaga was staying—his deputy Akechi Mitsuhide launched a surprise attack on him and forced him to commit suicide.

Mitsuhide should have been traveling west on Nobunaga’s orders to support Hideyoshi against Mōri. Nobunaga himself would shortly have followed after. Instead, Mitsuhide suddenly changed course, leading his 13,000 soldiers to the deadly encounter at Honnōji. He also forced the suicide of Nobunaga’s eldest son, Nobutada, at Nijō Castle in Kyoto. 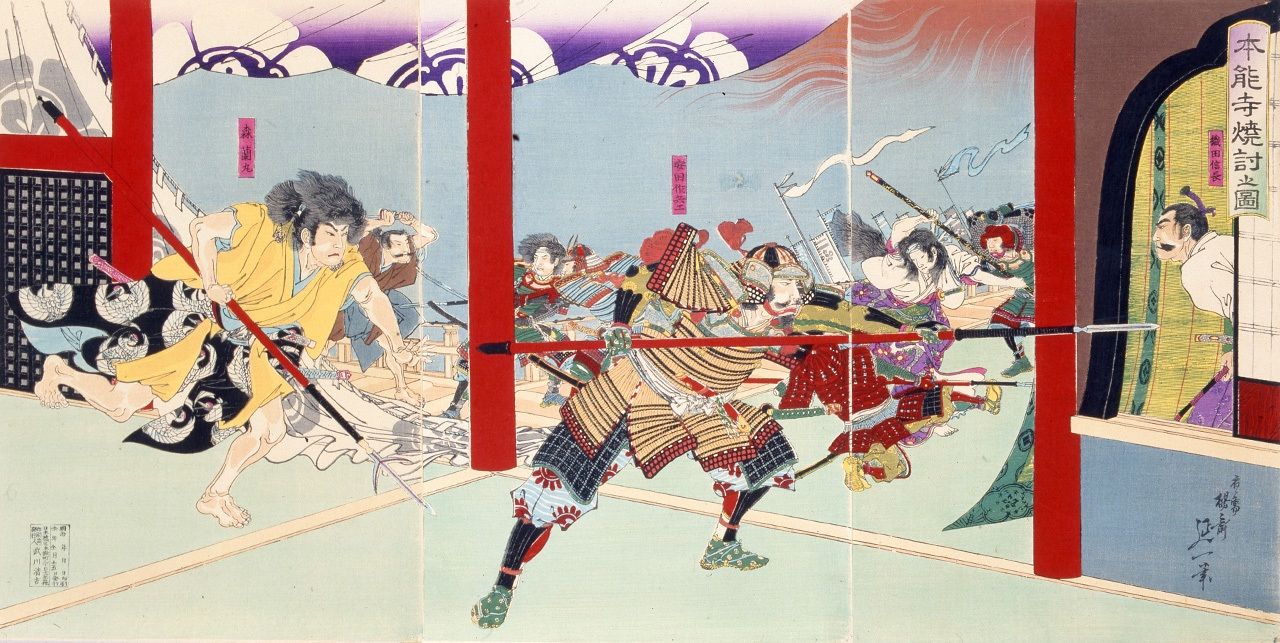 An ukiyo-e painting depicting the Honnōji Incident. Oda Nobunaga is at the far right of the picture. (Courtesy Hideyoshi and Kiyomasa Memorial Museum)

What made Mitsuhide turn to treason? One longstanding theory is that he held a grudge against Nobunaga and had his own ambitions for ruling the realm. It has also been suggested that someone was pulling the strings behind the scenes—whether the imperial court, Yoshiaki (still nominally shōgun), or Hideyoshi. Another popular recent theory centers on the island of Shikoku. Mitsuhide brokered a deal between Nobunaga and Chōsokabe Motochika of Tosa, permitting the latter to subjugate the whole of the island. When Nobunaga subsequently withdrew from this arrangement, offering permission for conquest of a much smaller area. Motochika objected, upon which Nobunaga prepared an army to cross to Shikoku and engage him in battle. It has been proposed that Mitsuhide’s loss of face prompted his betrayal of Nobunaga. However, there is no decisive evidence to support this, and it is just another theory that attempts to explain Mitsuhide’s act.

Thus, Nobunaga’s ambition was thwarted when the realm appeared to be within his grasp. Betrayed by his subordinate, he ended his life. It was left to Hideyoshi, who defeated Mitsuhide at the Battle of Yamazaki in July 1582, to continue his task. 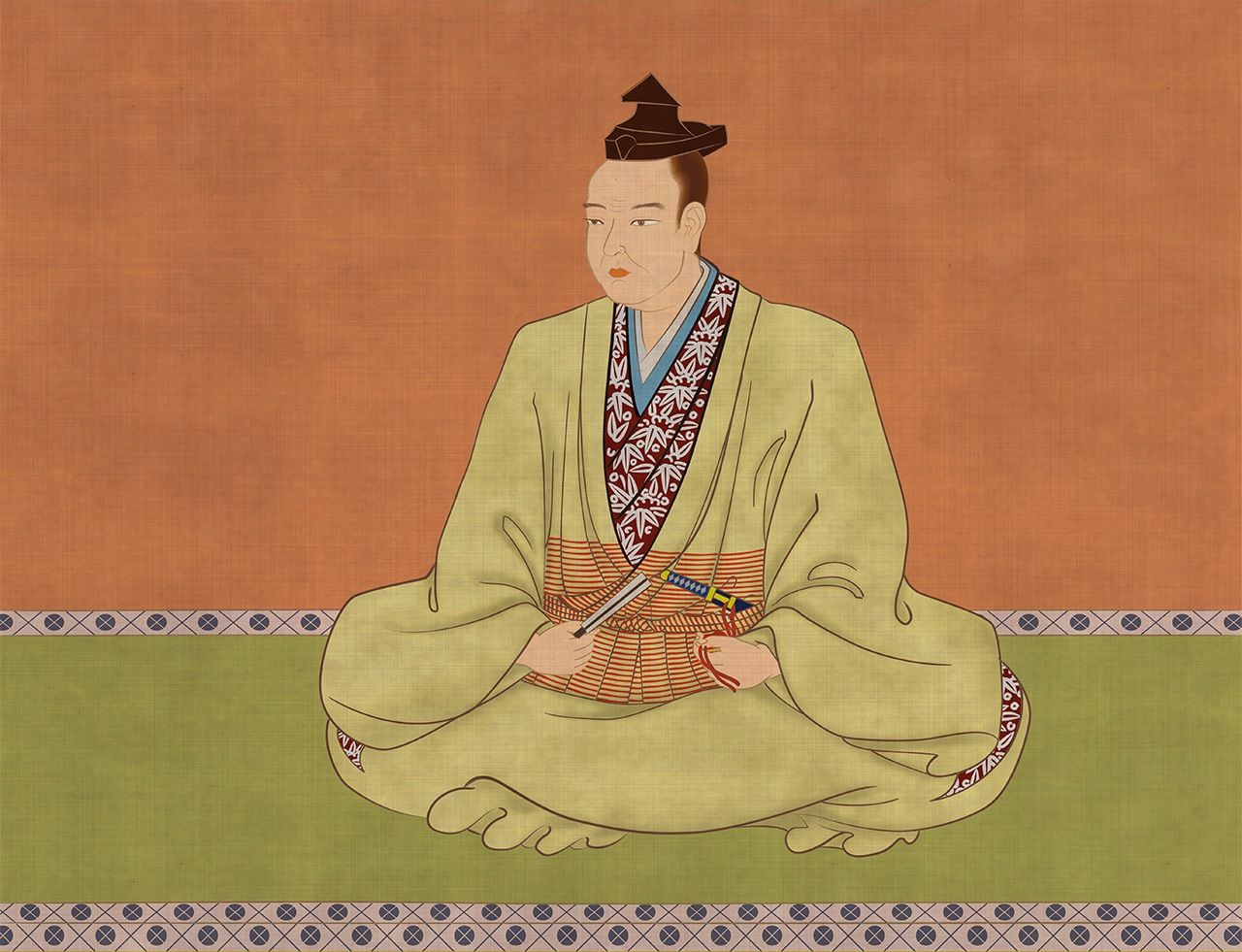