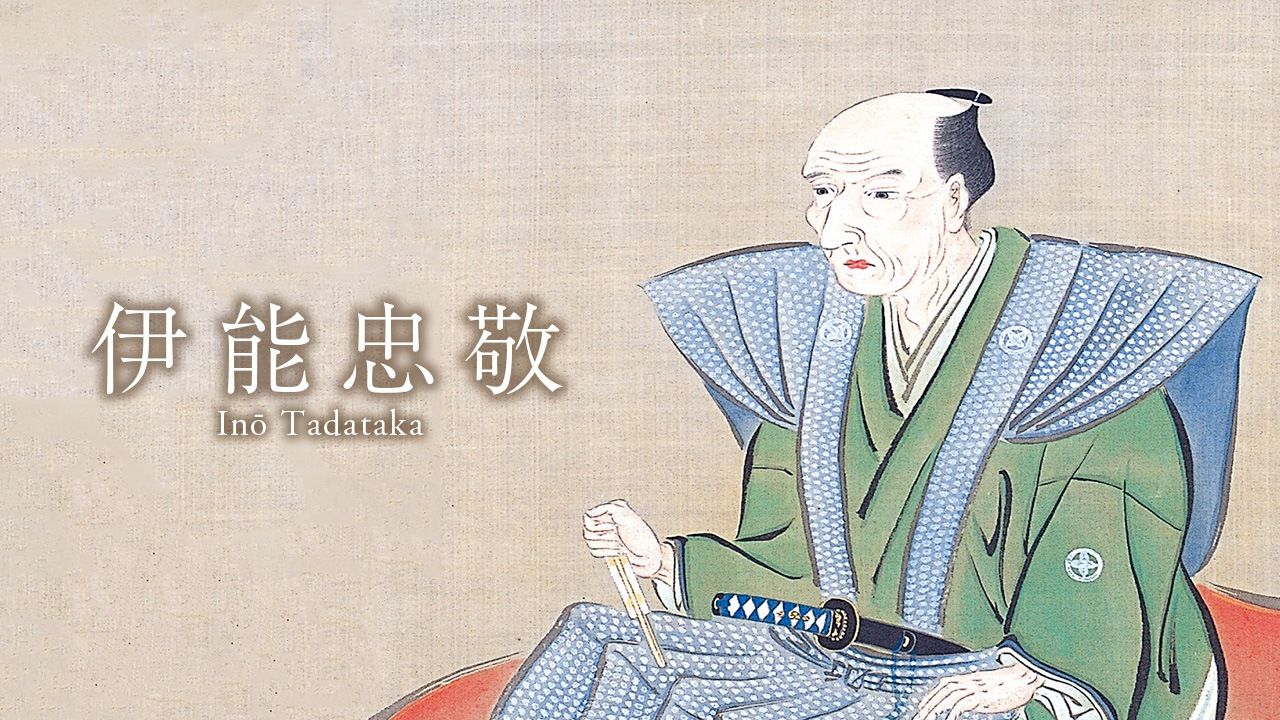 History Culture Jan 30, 2020
Inō Tadataka was 55 years old when he set out to methodically survey the entire coastline of Japan, a task he would spend the next 17 years of his life completing.

During the latter part of the Edo period (1603–1868), geographical surveyor Inō Tadataka (1745–1818) set to work charting the coastline of Japan, a mammoth undertaking that consumed the last decades of his life. Inō would die at the age of 73, before seeing his life’s work completed in the form of a map of the nation based on his survey activities. But he is recognized as the first person to survey the entirety of Japan using modern scientific techniques. His collection of highly accurate maps served as the basis of the mapmaking efforts of the modern Meiji government. 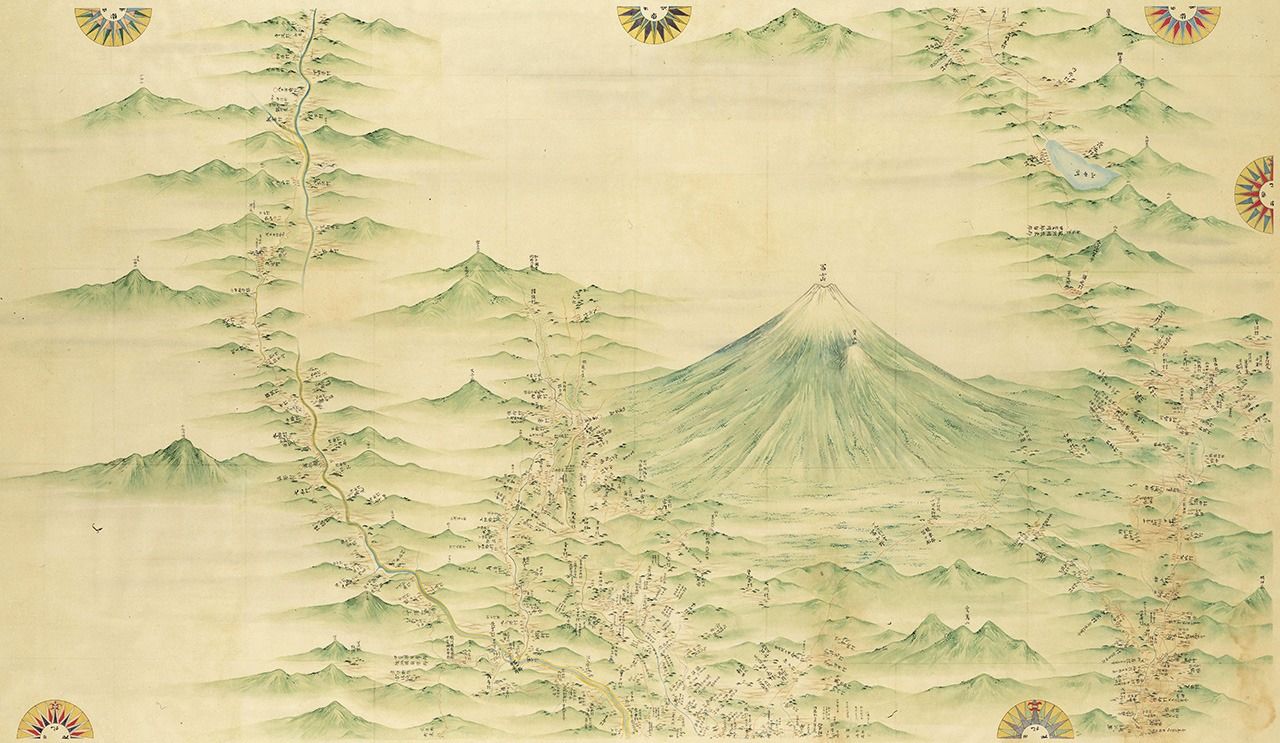 A section of Inō Tadataka’s map of Japan showing Mount Fuji and surrounding areas at 1:36,000 scale. It is 1 of 214 individual, hand-drawn sheets that make up the series. (Courtesy of the National Diet Library)

Tadataka was born on the Kujūkuri coast in Kazusa Province in what is now Chiba Prefecture. Although his father was an important person in the village, he suffered a tumultuous childhood. His mother died when he was six and his father, who had married into the household, was obliged to leave the family; the two did not reunite until the boy was 10.

An able student, Tadataka had a talent for arithmetic and a fondness for stargazing. At 17, he married into the Inō family, a merchant clan in the nearby village of Sawara. As heir, he used his business acumen to rebuild the family’s declining sake brewing operation and financial and other enterprises.

The young man had a deep love of learning and eagerly pursued subjects like mathematics and astronomy even as he tirelessly worked to revive the family’s prosperity. As village headman, he used his accounting knowledge to keep track of communal resources, including calculating the community’s share of rice rations during times of famine, and showed early promise as a cartographer, drawing a map of the nearby Tone River that served for flood control and irrigation purposes. (He would refer to this map in his later surveying efforts.) Inō’s broad expertise and talents earned him recognition from the lord of the domain, who bestowed on him the high honor of bearing a surname and carrying a sword.

At the age of 49, Inō stepped down as family head, turned the business over to his son, and retired with his wealth to the neighborhood of Fukagawa in Edo (now Tokyo). There he threw himself into the study of astronomy, transforming his home into an observatory filled with an array of instruments for observing the skies. Shortly after retiring, he became the pupil of Takahashi Yoshitoki, a leading astronomer of the ruling Tokugawa shogunate who had been tasked with revising the Japanese calendar. Takahashi was well versed in Chinese and Western astronomy, and under his tutelage, Inō mastered the use of celestial bodies to fix his geographical position, a vital skill that enabled him to methodically survey vast areas of land.

Following his apprenticeship, Inō set about to determine the size of the earth, a task that would first require him to work out the span of one degree of meridian arc. He attempted this by calculating the distance between his home and the shogunal calendar office using a surveying technique called traversing that involves precisely measuring the length and direction of a series of connected lines between two fixed points. Upon reporting his findings to Takahashi, though, Inō’s former teacher quickly declared the total length measured to be inadequate; there was too high a risk of error for it to be practical. At the very least, Inō would need to measure the distance between Edo and the northern island of Hokkaidō, then called Ezo, if he hoped to come up with a usable figure.

Ezo at the time was an untamed wilderness inhabited by tribes of indigenous Ainu. The shogunate maintained a scattering of outposts around the island and strictly controlled visitors, but with the steady encroachment of Russian vessels, officials were keen to strengthen Japan’s claim to the land. When Takahashi proposed that Inō conduct a thorough survey, the government sanctioned the Ezo excursion, providing a modest stipend that Inō supplemented with personal funds.

In 1800, Inō led a small team northward and spent six months surveying the island. The maps the team produced impressed shogunal leaders, and the following year Inō was sent to survey the intricate Pacific shoreline of northern Honshū, Japan’s main island. By the time of his second outing, he had achieved his goal of measuring one degree of latitude, which he determined from his earlier measurements was 28.2 ri, or 110.75 kilometers; he and his teacher Takahashi later delighted that his findings closely matched those in French astronomer Jérôme Lalande’s influential work Astronomia of Sterrekunde, which was an important reference text for Japanese stargazers at the time.

Over the next two years, Inō completed his survey of eastern Japan, charting the Japan Sea side of northern Honshū in 1802 and the central part of the island in 1803. He presented the fruits of his labor to the shōgun Tokugawa Ienari, spreading the maps out in a reception hall inside Edo Castle. The detailed charts impressed the ruler to such a degree that he made Inō a retainer and ordered him to survey the western reaches of the country, with the costs of the endeavor to be fully financed by the central government.

Inō estimated it would take three years to carry out the survey, but mapping the bays, peninsulas, and islands along western Japan’s intricate shorelines proved to be a formidable task. Starting in 1805, his team, which had grown from a modest band comprised mostly of his pupils to now include survey experts from the shogunal calendar office, set out to chart the Kinki region, where present day Nara Prefecture is located. Over the next decade they worked their way through Chūgoku at the western end of Honshū and then on to the islands of Shikoku and Kyūshū before finishing with a survey of the capital of Edo itself. (They would also undertake an expedition to the Izu Islands, but age would prevent Inō from joining.) In all, Inō spent a total of 17 years surveying Japan, walking tens of thousands of kilometers in the process. 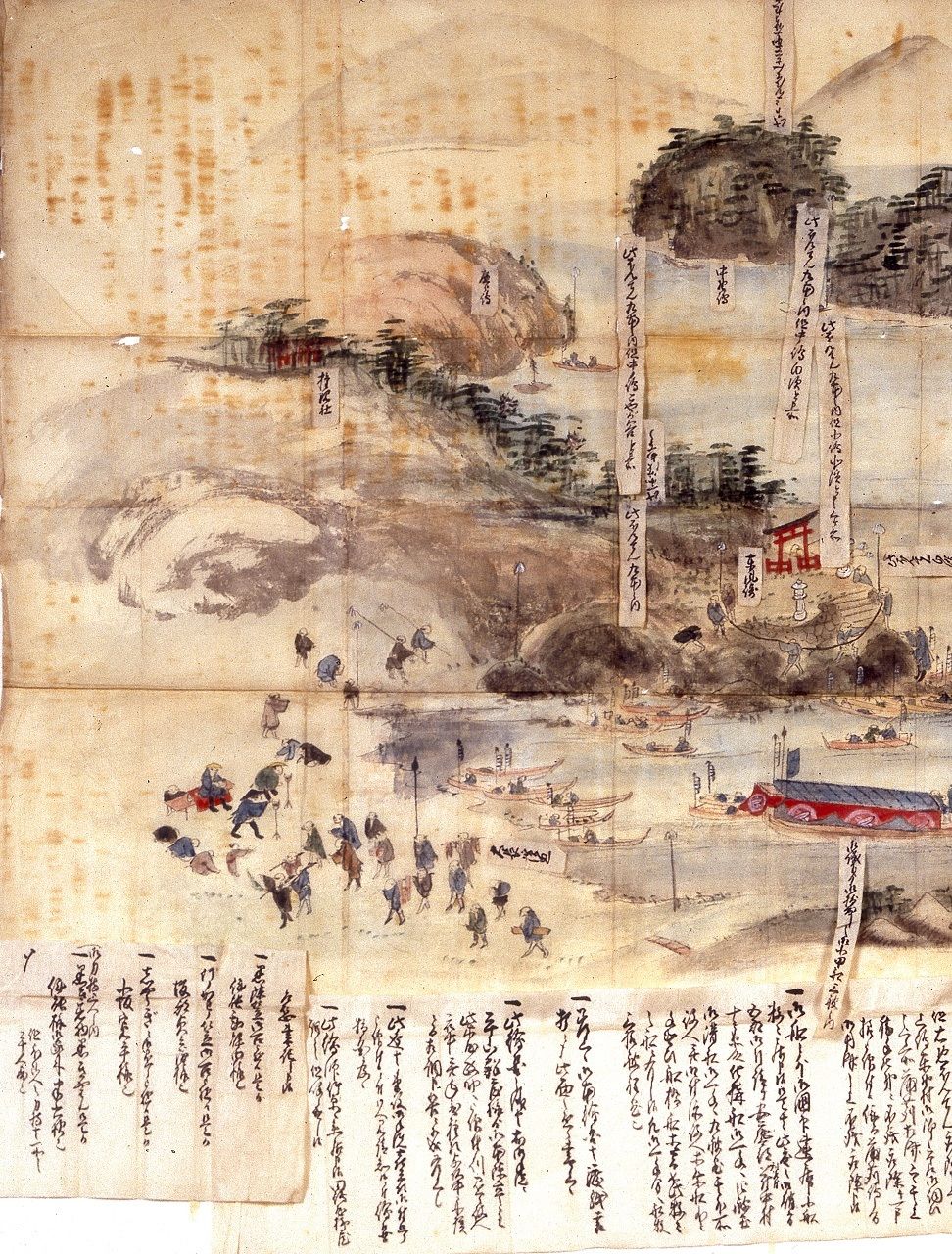 Inō and his band of surveyors in 1806 chart the port in Mitarai district on the island of Ōsaki Shimojima in present day Kure, Hiroshima Prefecture. (Courtesy of Kure City) 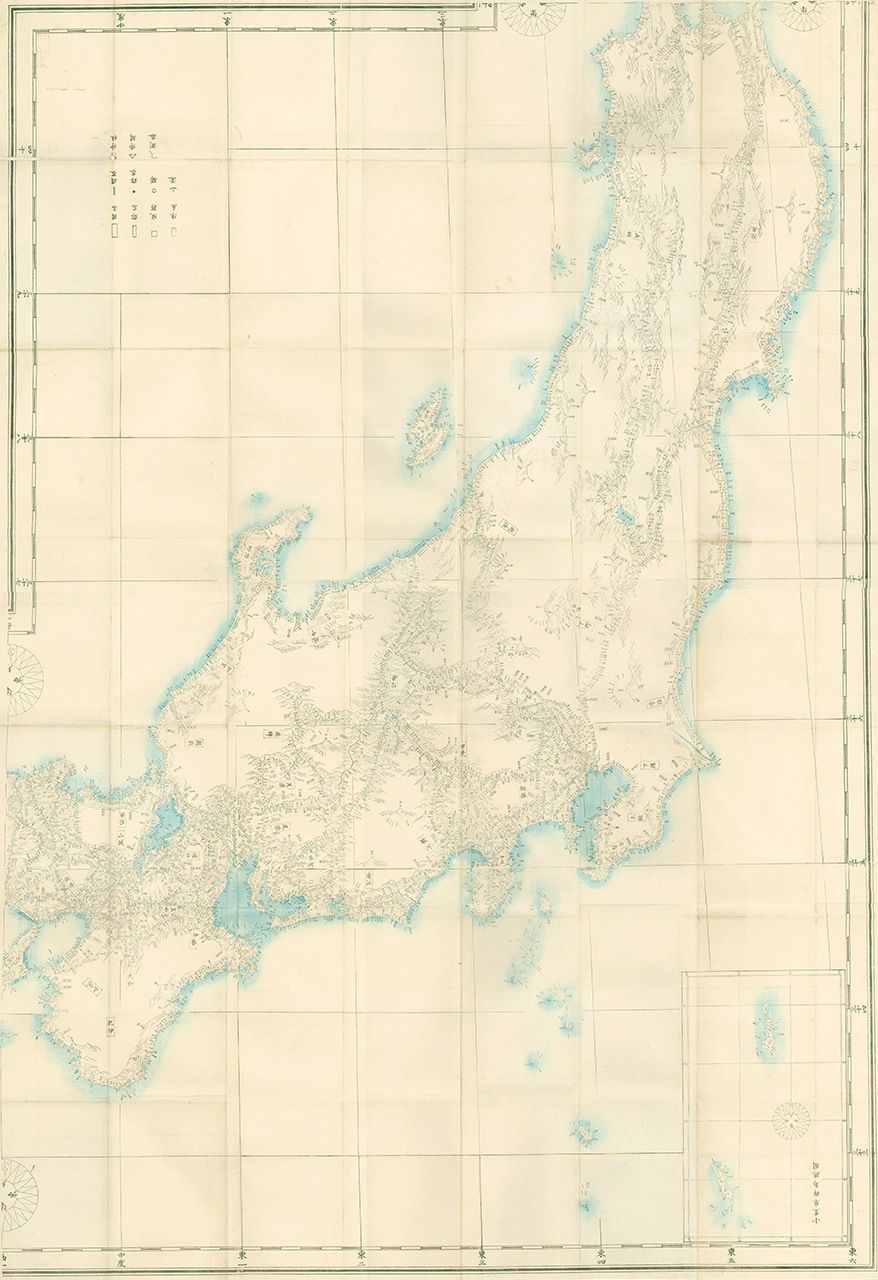 One of a four-map collection covering all of Japan and the island of Karafuto (Sakhalin) created in 1870 based on Inō’s earlier charts. (Courtesy of the Geospatial Information Authority of Japan)

Inō developed his surveying method as an unclosed traverse. Starting from a known location, he would measure the distance to a second reference point and calculate the positions of features like mountains and islands in relation to the line. He determined his latitude to an impressive degree of accuracy by observing the meridian altitude of fixed stars and then comparing the figures with readings from known points along the route and in Edo. However, figuring longitude proved to be more of a challenge. Inō measured the time of lunar and solar eclipses during his excursions with a pendulum clock, but poor weather conditions during events and the lack of a portable time piece severely hampered his ability to coordinate data among the different observation points, lowering the longitudinal accuracy of his maps.

There were other challenges to contend with as well. Inō suffered from asthma and contracted malaria during a later excursion, requiring him to lay down his instruments and seek treatment during bouts of illness. Government restrictions on domestic travel obliged him during early surveys to negotiate with officials in each realm for authority to conduct his work; his later appointment as a shogunal retainer absolved him of this by assuring his team the full cooperation of each domain.

That Inō succeeded in such a colossal undertaking is testament to his technical prowess and untiring determination. He also benefitted immeasurably from the support of Takahashi and his son Kageyasu, who assumed his father’s position at the shogunal calendar office, as well as the financial and administrative backing of the central and provincial governments, which were instrumental to the survey’s success.

After returning from his expedition to Kyūshū, Inō in 1814 took up residence at the shogunal mapmaking office and began the tedious task of turning the vast amount of data he had collected on his surveys into maps. These would eventually become what were commonly called the “Inō maps,” a meticulously drawn series of charts rendered in large (1:36,000), middle (1:210,000), and small (1:430,000) scales.

Inō, however, would not see the completion of the project. He died in 1818 and it fell to his students and lower-ranking officials at the shogunal calendar office to continue his work. Toiling for several more years, they finally submitted the finished maps to the shogunate in 1821. 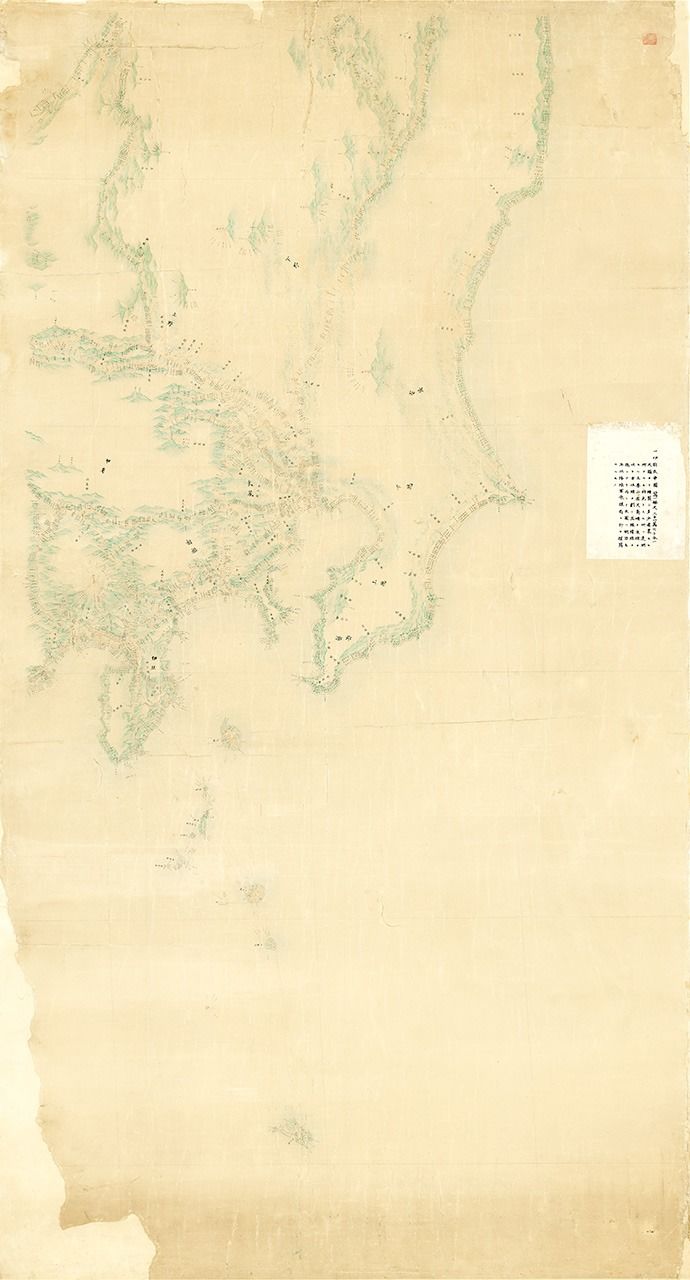 Inō’s map of the Kantō region, part of an eight-map series covering Japan drawn to 1:210,000 scale. (Courtesy of the Geospatial Information Authority of Japan)

The Tokugawa government never published the charts, however, and after the Meiji Restoration of 1868, the originals were lost in a fire at the Imperial Palace. Later, the Home Ministry, army, and navy compiled official maps of Japan based on copies of Inō’s works obtained from his family, but these replicas too were lost in the conflagration sparked by the 1923 Great Kantō Earthquake. The examples of Inō’s maps that exist today come from private collections, including copies gifted to daimyō. Many of these have been designated by the government as important cultural properties and national treasures.

Today, Inō is admired not only for his monumental achievement in surveying all of Japan, but also for the fact that he undertook his second career at such an advanced age, leading some even to see him as a model for the nation’s aging population.

The image he left behind was not uniformly positive, though. While it is true he was a gifted surveyor and shrewd leader who possessed an unwavering commitment to his calling, he was also known to be stern and inflexible in dealing with people, even to the point of disowning his son and daughter and turning out pupils for offences.

These harsher aspects, however, are overshadowed by his grand accomplishment. In 1883, a group of Japanese statesman that included Sano Tsunetami (who, as a retainer of the Saga domain ,had been deeply impressed by Inō’s maps while serving at the naval training center in Nagasaki) and Enomoto Takeaki (whose father had been Inō’s pupil and served on several excursions) led a drive to posthumously give the renowned cartographer a middle-rank court title.

More recently, the observance of the 200th anniversary of Inō’s first surveying expedition in 2001 and his death in 2018 were marked by a variety of events, including lectures by experts, exhibitions of his maps, commemorative walking tours following in his footsteps, and even a movie based on his life, illustrating that public interest in the mapmaker remains strong, even centuries later.