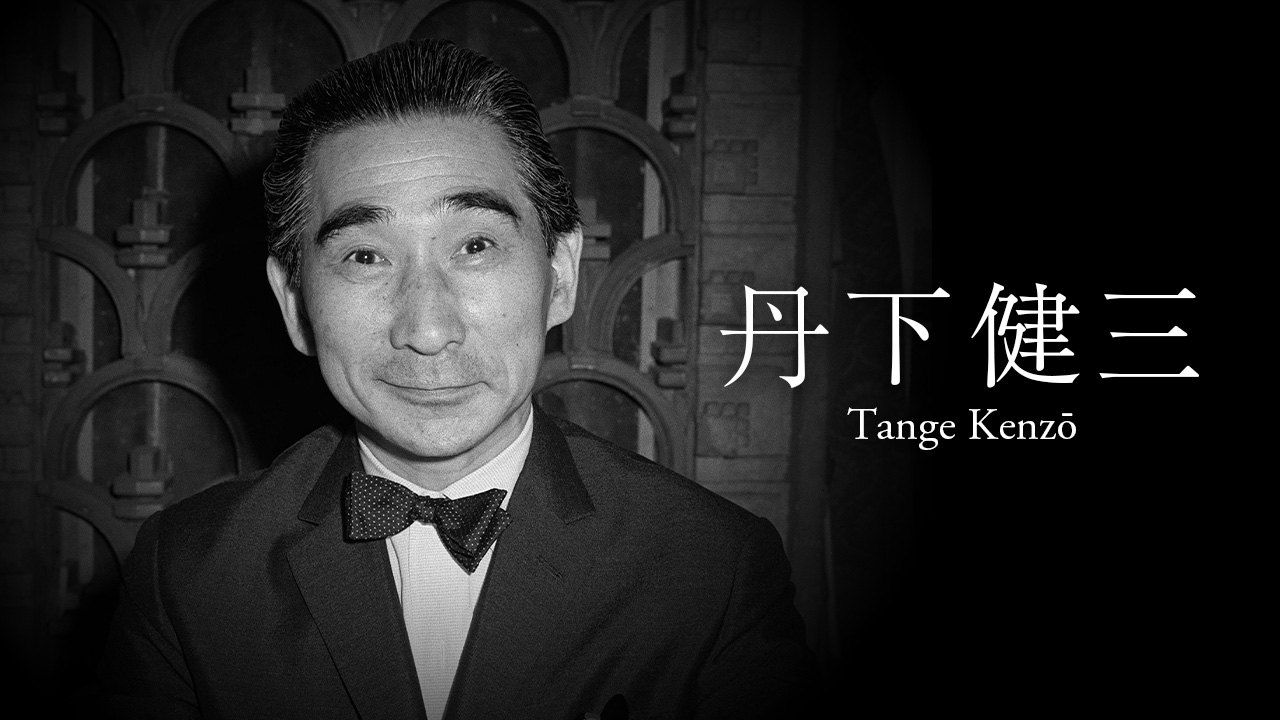 Culture Jul 12, 2021
One of postwar Japan’s most renowned architects, Tange Kenzō is remembered for such major works as the Hiroshima Peace Memorial Park and the Yoyogi National Gymnasium. He won global acclaim for his urban designs, and many of his disciples went on to achieve international recognition in their own right. He passed away in 2005, but his legacy lives on.

According to an account I heard, when the same question was asked at a gathering of European cultural figures some time ago, they agreed on Mishima Yukio, Kurosawa Akira, and Tange Kenzō. This is a dated story, and one might discount the set of selections as one-sided; the three “giants” were picked by upper-crust Europeans and do not include a single woman. Even after we allow for these shortcomings, however, the fact remains that these three produced works of tremendous appeal and are highly influential both in Japan and internationally to this day.

A Life of Accomplishments

Tange Kenzō was born in Sakai, Osaka Prefecture, in 1913 and as a child lived in Imabari, Ehime Prefecture, where his father’s family home was located. After graduating from Hiroshima Higher School (one of the predecessors to today’s Hiroshima University), he entered the Department of Architecture at Tokyo Imperial University (now the University of Tokyo). He was strongly impressed by the contemporary French architect Le Corbusier and was always to be seen with one of the latter’s books wedged under his arm as he strode around the campus. Upon graduation, he took a job working at an architectural design office but subsequently returned to the university and pursued graduate studies in urban development and architecture.

After World War II, Tange was hired as an assistant professor in the Department of Architecture at the University of Tokyo, and he launched his career as an architect, working out of his laboratory at the university. There he designed many public edifices and spaces, including the Hiroshima Peace Memorial Park, the Kagawa Prefectural Government Building, Tokyo’s city hall, the Yoyogi National Gymnasium, St. Mary’s Cathedral in Tokyo, and the Festival Plaza for Expo ’70 in Osaka.

Upon reaching retirement age in 1973, Tange left his post at the University of Tokyo. In his subsequent work he was not so much an architect as what might be called an “urban conceptualizer.” He won global recognition for his accomplishments as a creator of blueprints for new national capitals, an urban planner, and a campus designer, producing works in places like the oil-exporting countries of the Middle East, developing countries in Africa, and Singapore. 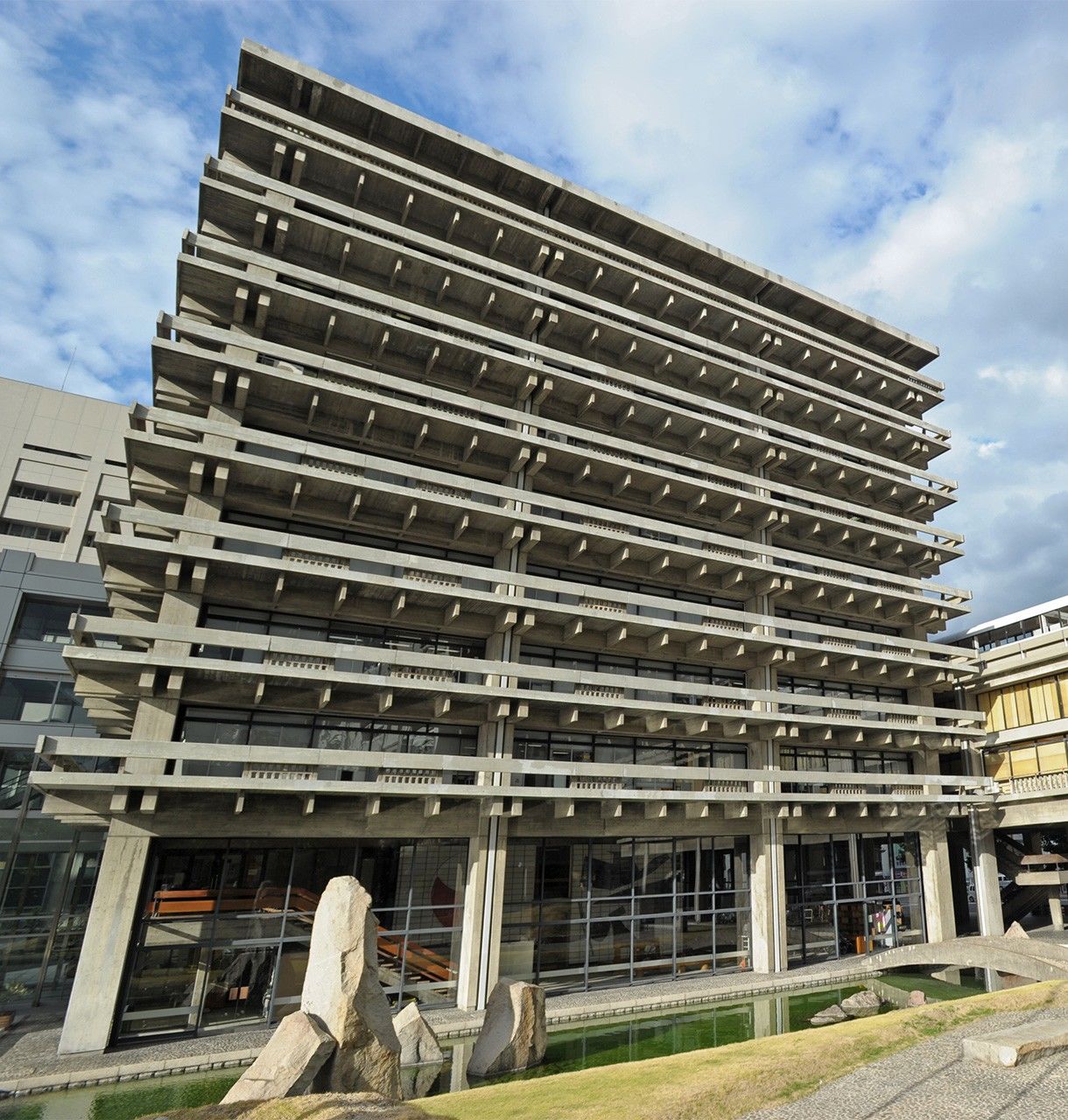 In his design for the Kagawa Prefectural Government Building, a modernist edifice completed in 1958, Tange used pillars and beams of concrete to represent the structure of a traditional wooden Japanese building. (© Jiji) 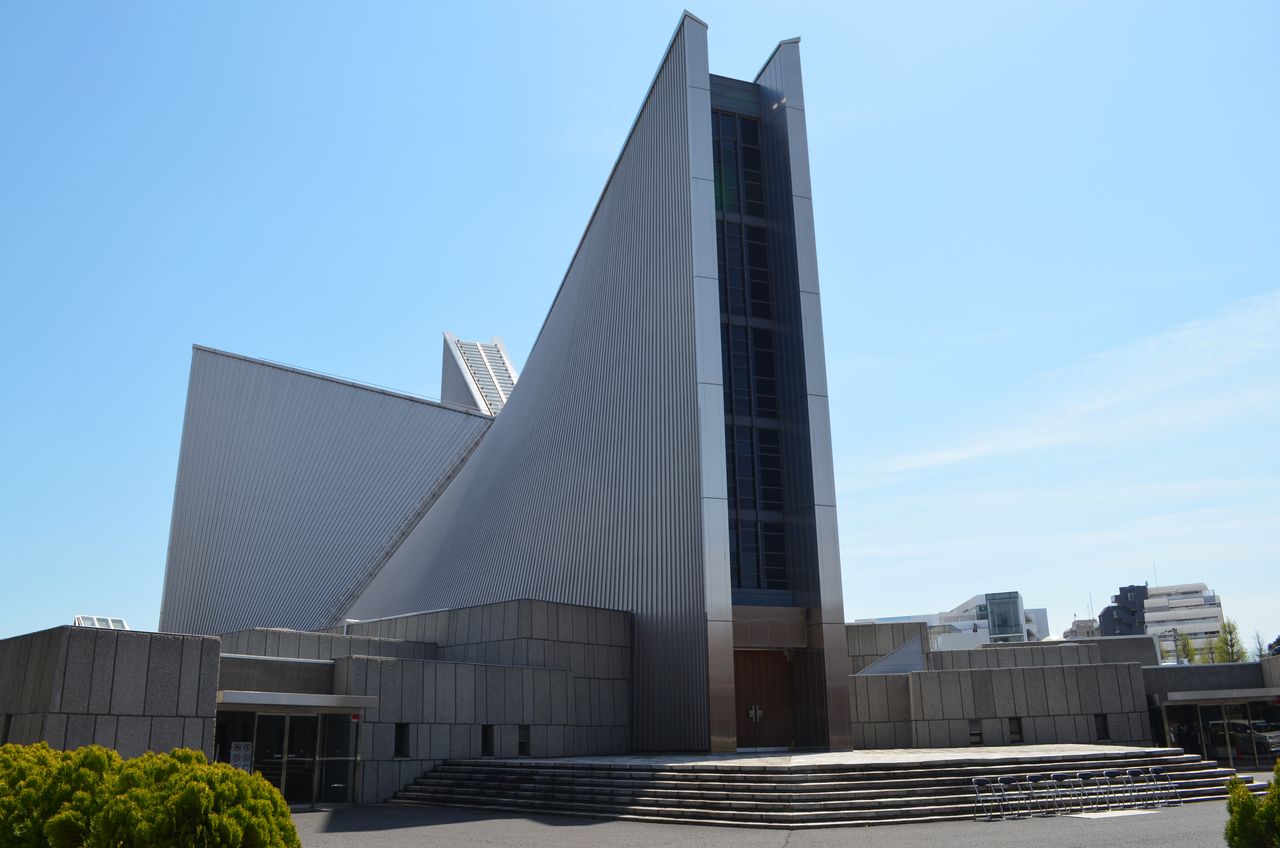 St. Mary’s Cathedral in Tokyo, completed in 1964, was one of the works that won Tange international attention. (© Pixta)

Over the course of his career, Tange created numerous architectural works around the world, but the majority of his masterpieces were built in Japan, particularly in the years from 1949, when he started working as an architect, to 1970, when Expo ’70 was held in Osaka.

Isozaki Arita, one of Tange’s leading disciples, notes, “All his work involved the destiny of the ravaged archipelago, but in the ideas and methods he applied to urban and architectural design he had his gaze on the world.” Here “the destiny of the ravaged archipelago” refers to the rebuilding of Japan’s devastated cities after World War II and the subsequent achievement of high-paced economic growth. Tange’s concepts about cities and structures can be said to have been well matched to the conditions of the times.

Two of Tange’s famous works that embody this match are the Hiroshima Peace Memorial Park and the Yoyogi National Gymnasium. The park was created facing the Genbaku Dome commemorating the atomic bombing of the city. It was designed to serve both as a memorial to those who lost their lives in the bombing and as a site for building peace. The gymnasium was constructed on the site of the former Washington Heights, which housed US service members and their families in the years after the war. This striking edifice served as the venue for the swimming and basketball competitions of the 1964 Tokyo Olympics. And it sent the message to the world that Tokyo had made a brilliant comeback from its wartime devastation. 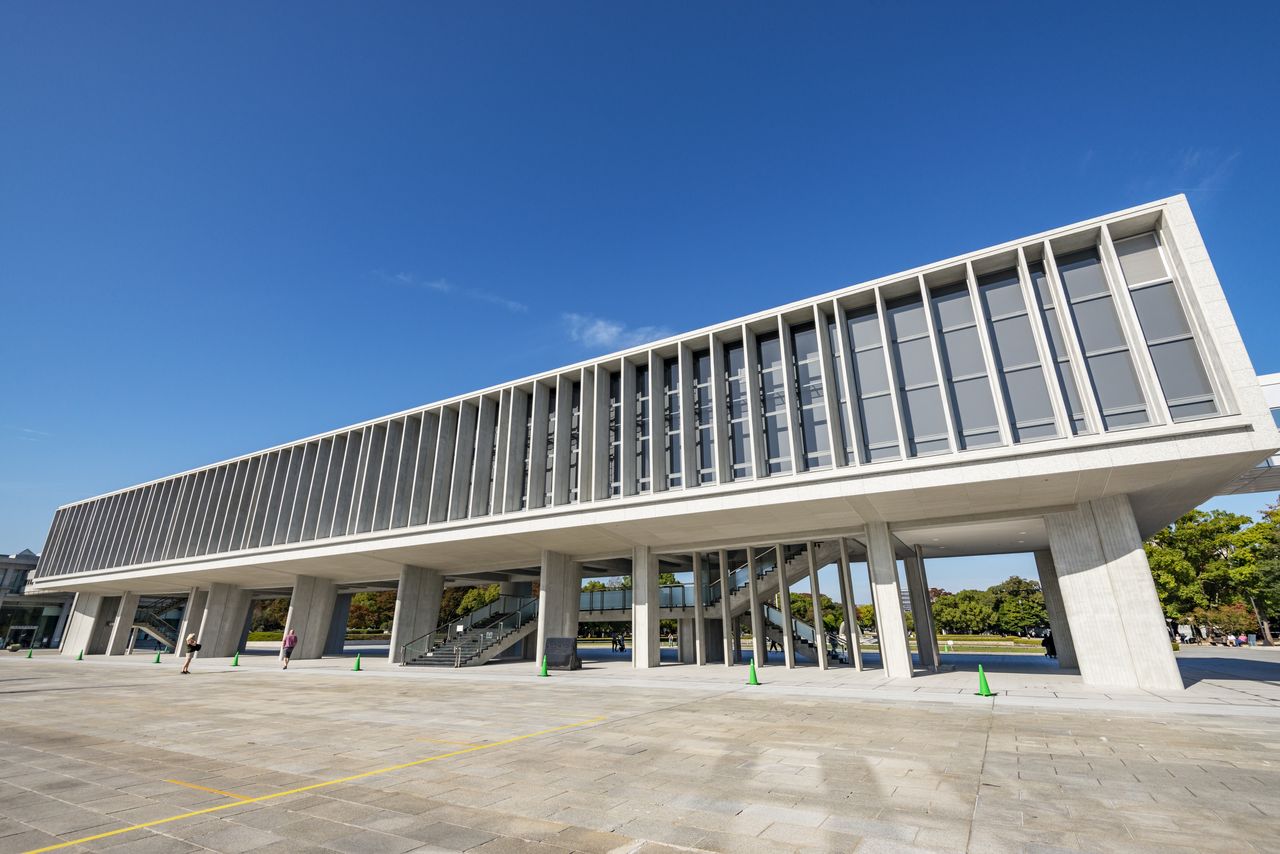 The Hiroshima Peace Memorial Museum is the central edifice of the Peace Memorial Park, completed in 1949. This work marked Tange’s professional debut. (© Pixta) 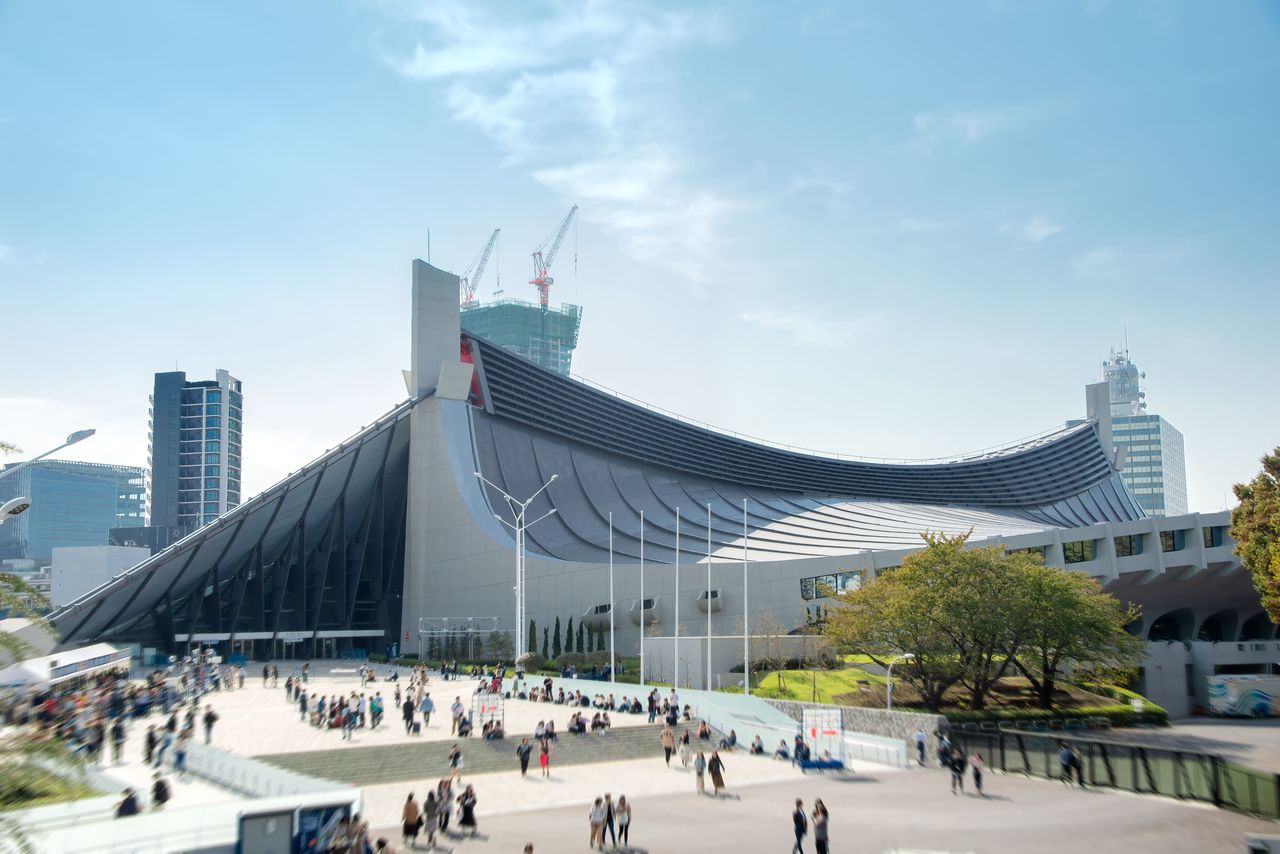 The Yoyogi National Gymnasium, featuring a dramatic suspended roof, was completed in 1964 for the Tokyo Olympics. (© Pixta)

The Hiroshima Peace Memorial Park has also provided an international stage for the delivery of appeals for lasting peace, including speeches by US President Barack Obama and Pope Francis. And the Yoyogi National Gymnasium, is still widely appreciated by the public as part of the physical legacy of the 1964 Tokyo Olympics, and it continues to serve as a multipurpose facility with an extraordinarily full calendar of events. 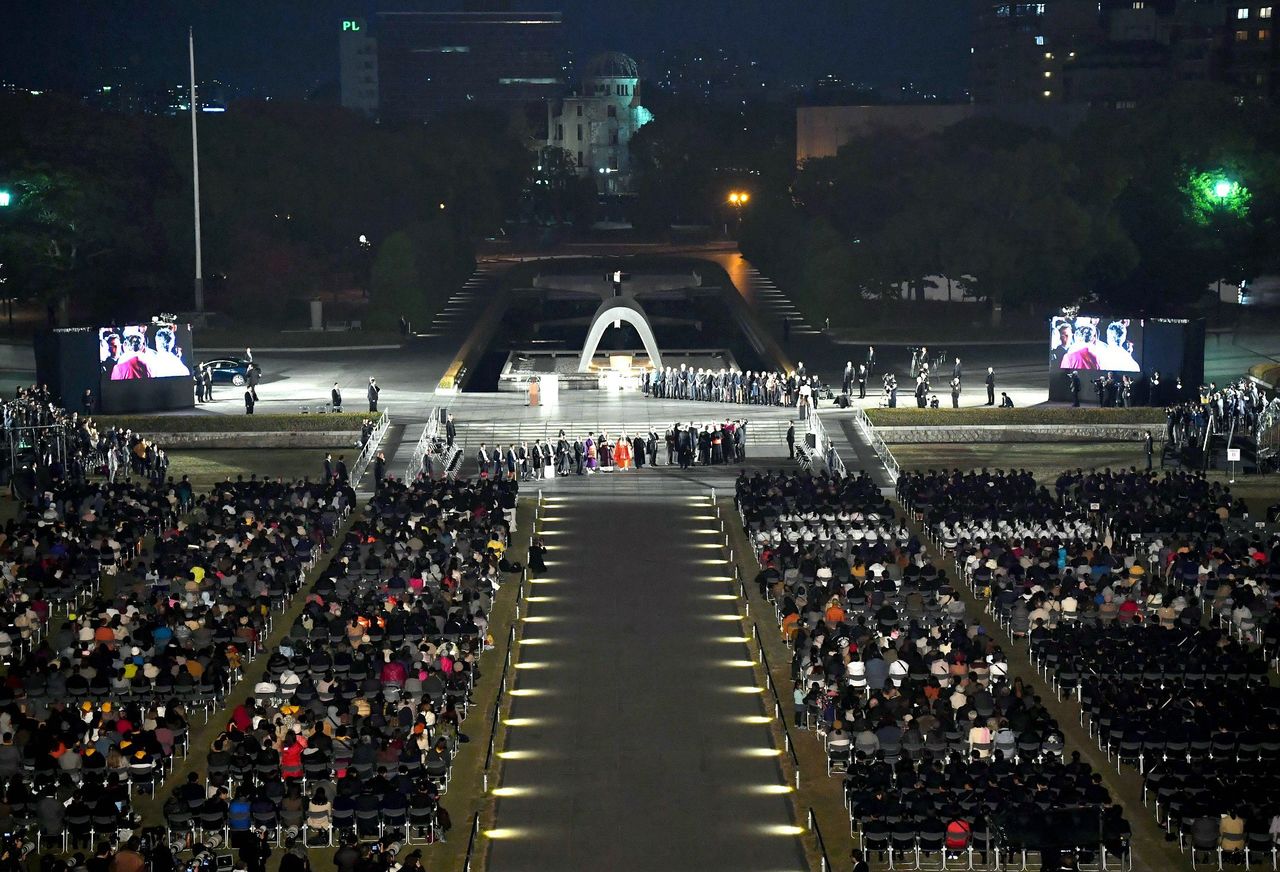 Tange taught at the University of Tokyo from just after the end of World War II through 1973. And in the years up to around 1964, he conducted his architectural design activities out of his laboratory at the university. There he had a team of assistants and graduate students working with him, including Maki Fumihiko, who reminisces as follows: “By analogy with baseball, we were more like a high school team than a professional squad. [Laughs] At an ordinary architectural office, you have graduates of various universities, but everybody in Tange’s lab at the time was from the University of Tokyo.”

Tange and his wife acted as the ceremonial go-betweens for most of the team members’ marriages. In this and other ways the group, including members’ families, enjoyed close ties.

A Japanese Pioneer on the International Scene

Before World War II, Japanese architects had been active outside of the Japanese archipelago, working in places like the Korean Peninsula, China, and Southeast Asia, but after the war they were limited to working within Japan. However, Tange was able to build a network of international connections starting in 1951, when he participated in an international conference held near London. In 1959 he became a visiting professor at the Massachusetts Institute of Technology.

Tange’s international reputation was boosted with the 1964 completion of the Yoyogi National Gymnasium, after which the scope of his activities continued to expand. His crowning work was the Festival Plaza he designed for Expo ’70 in Osaka. Middle Eastern royals and government leaders from newly independent African nations who visited the exposition were apparently impressed by what Tange had achieved, transforming a bamboo-covered area of 3.3 million square meters into the site of this world’s fair. And some of them subsequently asked Tange to produce designs to transform expanses of desert and savannah in their countries into cities that would be the envy of all. 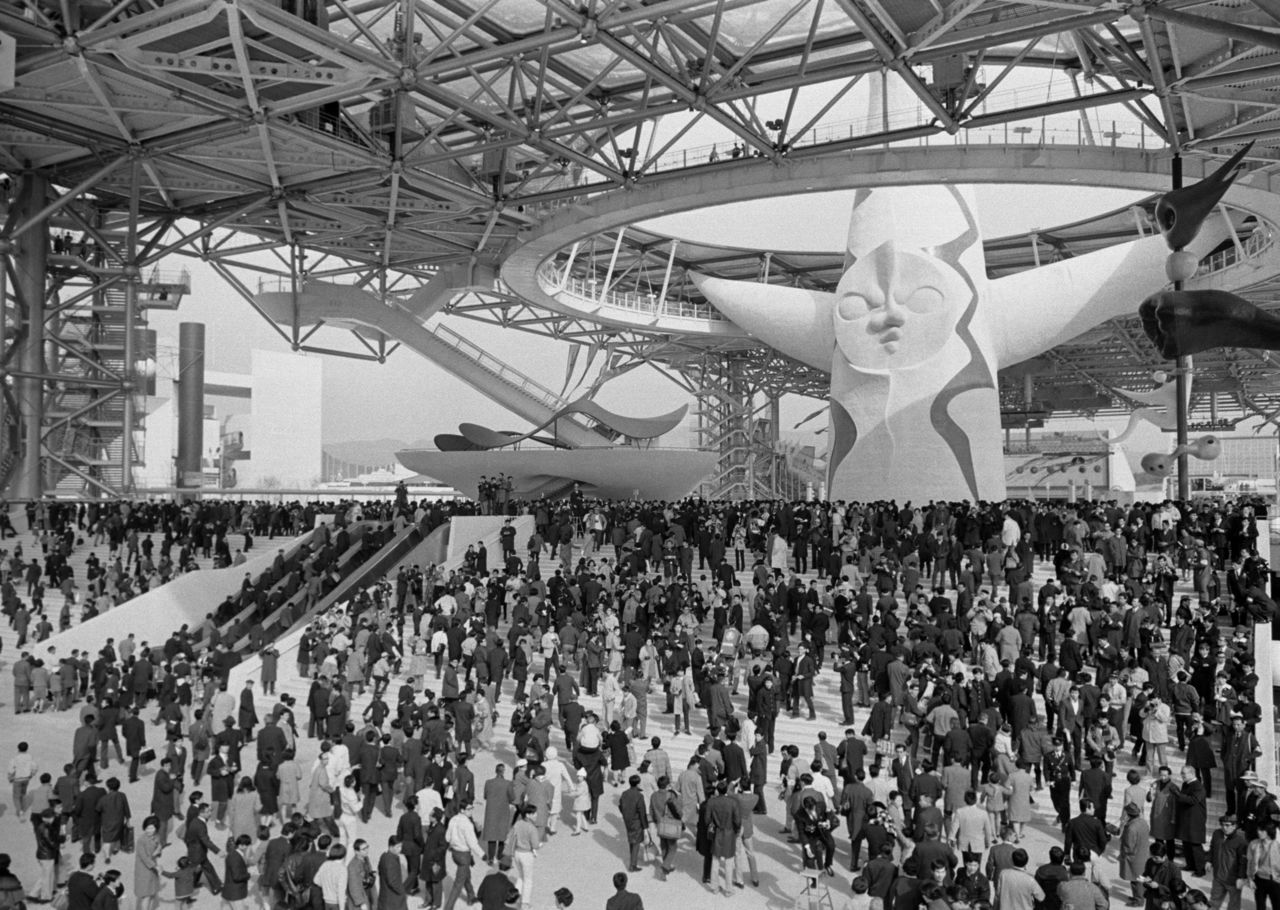 Expo ’70 Festival Plaza: The 1970 world’s fair in Osaka was a nationally organized event aimed at showing the world the fruits of Japan’s dramatic economic growth. (© Jiji)

In addition to Tange’s talent, the fact that he was an Asian may have made him a more attractive choice than architects from Europe for the leaders of emerging nations that had just achieved independence from European colonial powers. It is understandable that might have wanted to turn to a non-European architect like Tange to design the official facilities of their new national governments.

Above we have looked at the ways Tange won domestic and international acclaim mainly for his work in Japan. Subsequent to Expo ’70, however, his designs failed to achieve the same sort of plaudits as before. People said that, whereas previously he had tackled public projects of national significance in Japan, in the wake of the 1973 oil crisis (which was a major blow to the Japanese economy) he had gone “commercial.” And his designs of palaces for Middle Eastern monarchies and of the Tokyo Metropolitan Government Building were labeled “authoritarian.” 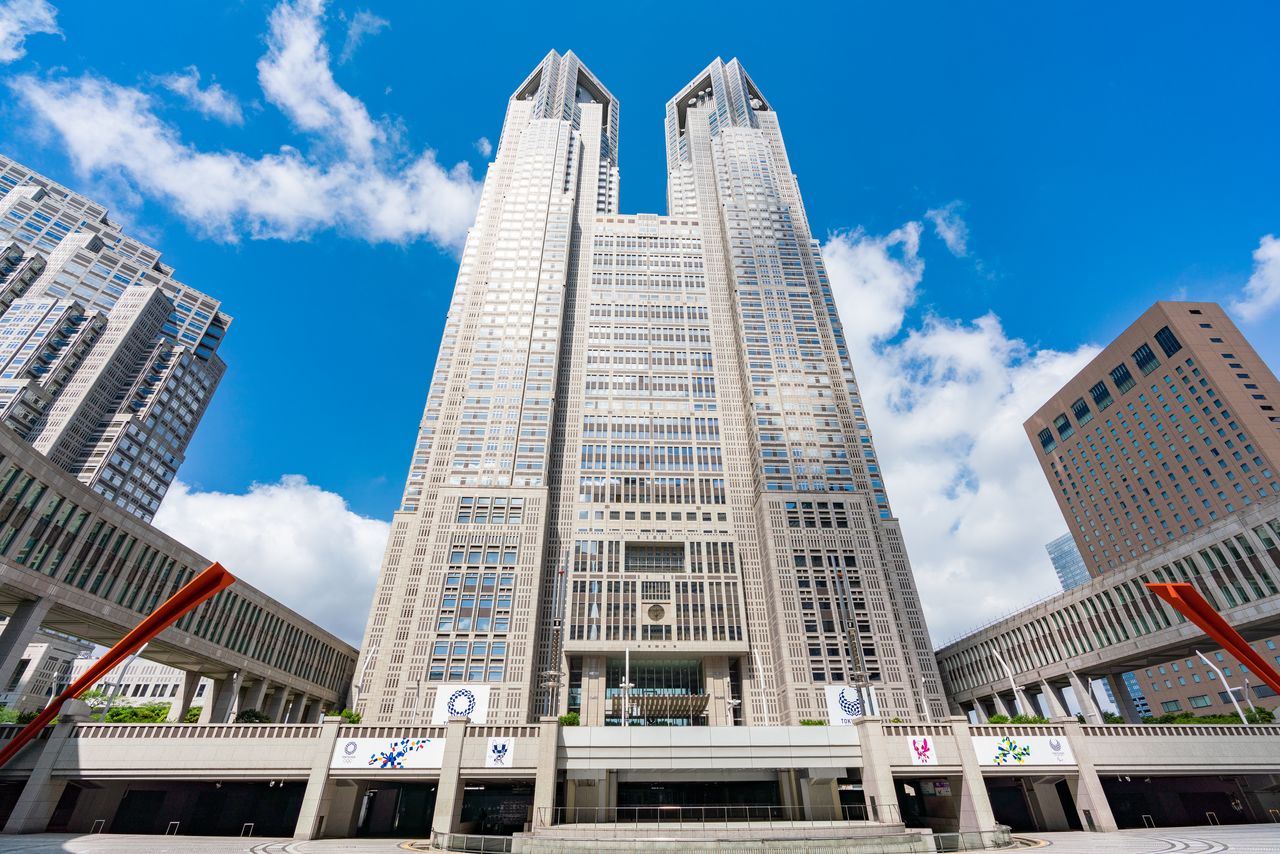 Completed in 1991, the twin-tower Tokyo Metropolitan Government Building in Shinjuku is an icon of Tokyo as an international city. Tange worked on this landmark in tandem with Suzuki Shun’ichi, governor of Tokyo from 1979 to 1995. (© Pixta)

After the oil crisis Tange may be said to have turned away from Europe to Singapore as his ideal. Highly sympathetic to the financial capitalism espoused by this city-state under the leadership of Lee Kuan Yew, he designed and built many skyscrapers there. He also strove to copy Singapore’s vision of a special economic zone as a model for the development of Odaiba, a waterfront district in Tokyo. 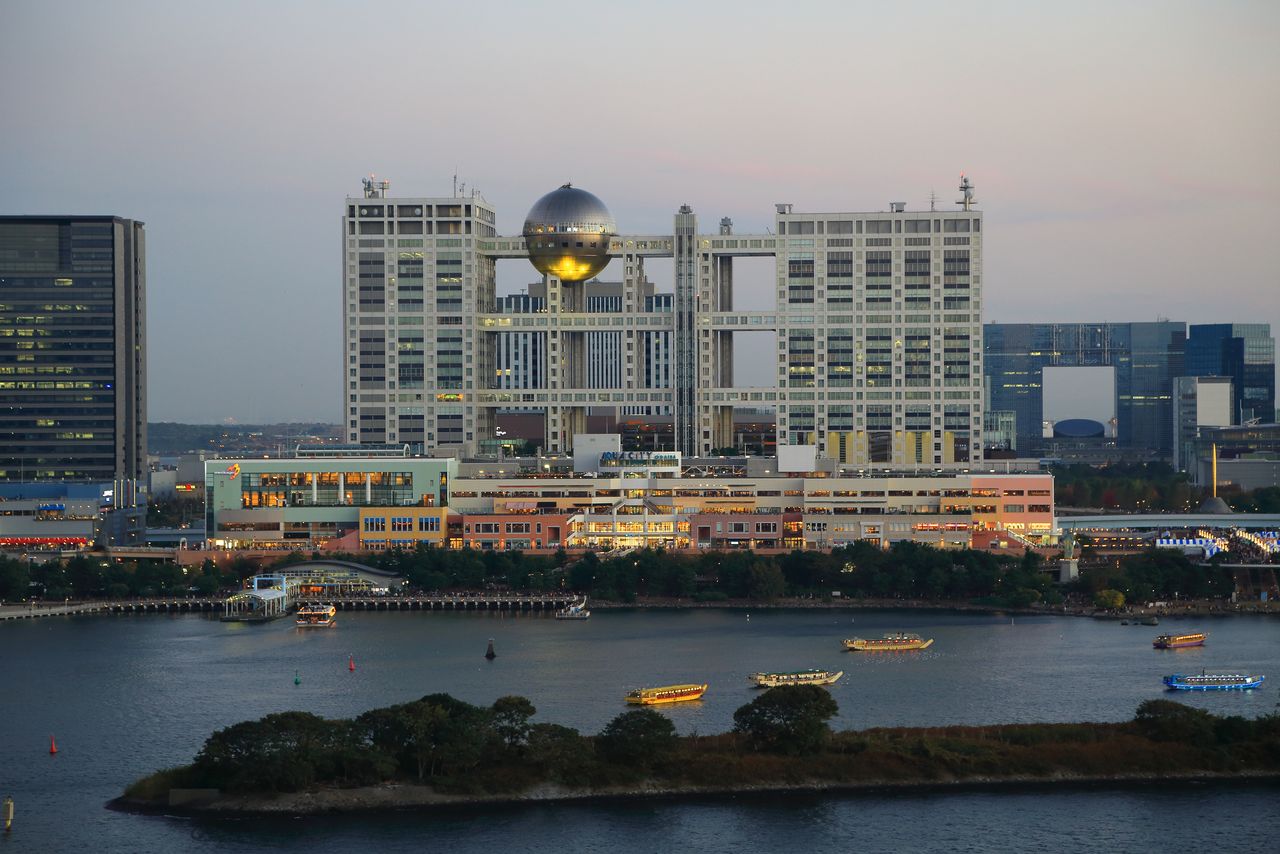 The FCG Building, completed in 1996 as the headquarters of the Fuji Television Network, was one of the works designed by Tange as part of the Tokyo waterfront development project he undertook in his later years. The design was inspired by his admiration of Singapore as an international financial hub. (© Pixta)

Over the decades from the end of World War II to the 1973 oil crisis, Japan confronted and overcame a series of devastating crises and achieved a dramatic increase in national income, along with improvement of its social welfare system. At the same time, it pursued international cooperation and world peace. In this context, Tange Kenzō won global renown for his work as the leading creator of urban spaces informed by the ideals of postwar Japan. He firmly believed that architects—and architects alone—could create cities befitting modern people.

The oil crisis, however, changed the environment for Tange as an architect. The hard-pressed Japanese government scaled back investment in the sort of major public projects that he had previously worked on. Deprived of domestic work, he devoted himself to creating concepts for cities and designs for edifices at the behest of national leaders and Middle Eastern royalty. People came to think that Tange preferred despotic regimes to democracy—a misunderstanding that was tragic for him.

Twenty-first-century architects, relying heavily on computers, have been producing overly flamboyant designs for cities, particularly in the oil-exporting countries. These designs have drawn attention from around the world and approval from national leaders. I doubt I am the only one who looks at them and sees Tange’s influence at work. The question before us is whether or not plans produced for plutocrats will be the blueprints for the cities of the future.