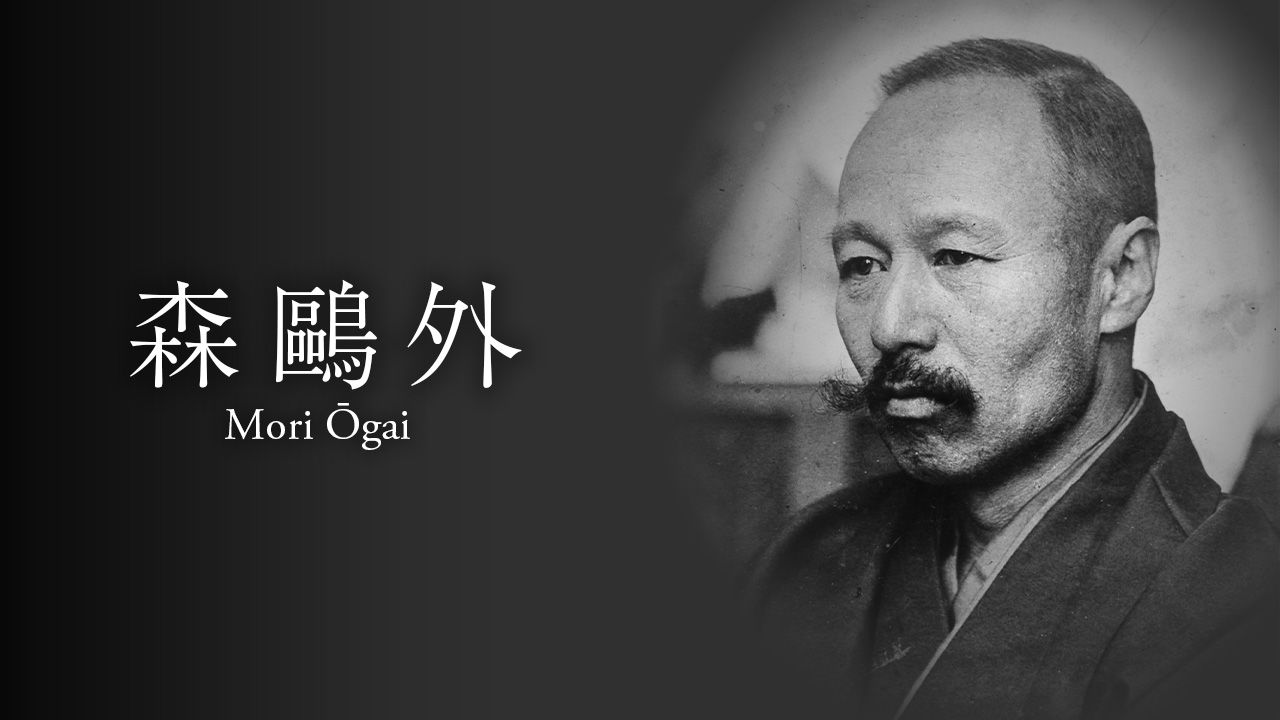 Mori Ōgai: The Polymath Intellectual Who Made Literary History

Culture History Jul 8, 2022
Mori Ōgai created new possibilities for Japanese literature with his fiction, translations, and other writings, while also rising to the highest level in his profession as an army surgeon. The year 2022 marks 100 years since he passed away.

Mori Ōgai was one of the great Japanese literary figures of the late nineteenth and early twentieth century, known for works including “Maihime” (trans. by Richard Bowring as “The Dancing Girl”). The year 2022 marks the centenary of his death. As well as a writer, in an eventful life, he was an army surgeon and a bureaucrat.

In 1862, Ōgai was born as Mori Rintarō in the Tsuwano domain (now Shimane Prefecture). He was the son of the domain physician, expected to become a doctor in his turn, and he received special education from an early age. This included Confucianism, which he started studying at the age of five, before entering the domain academy when he was seven to learn the Four Books and Five Classics. He also studied Western knowledge, learning some of the basics of Dutch medicine from his father Shizuo, and getting a start in the Dutch language.

In 1872, he went with his father to Tokyo and the rest of the family soon followed. The main focus of Western medical studies had switched from Dutch to German medicine, so Ōgai began learning German at a private school, and entered the First University District Medical School at the age of 11. This was renamed Tokyo Medical School the following year, and became the University of Tokyo Faculty of Medicine in 1877. The university’s medical training was conducted in German by German professors, but Ōgai was also learning Chinese poetry and prose outside the university, reading Chinese medical classics, and studying waka poetry with a kokugaku (national learning) professor. Thus, Ōgai’s youth was dominated by education in the Japanese, Chinese, and Western traditions, and the acquisition of a number of languages.

In 1881, prior to his graduation, Ōgai was keen to study abroad. However, a series of mishaps, including the destruction of his lecture notes by fire, resulted in a disappointing performance in the graduation examinations, and he was not selected via the Ministry of Education test for those wishing to pursue government-funded study overseas. After some indecision over his future, he enlisted in the army, becoming a military surgeon at 19. Three years later, in 1884, he achieved his desire when the army sent him to study in Germany.

In his four-year stay in the country, Ōgai performed his main duties of hygiene research and system surveys, while also finding time for voracious consumption of European art and culture via intensive reading of German literature and philosophy and visits to theaters and art galleries. Even after returning to Japan with masses of books, he continued to have the latest publications delivered from Germany, along with newspapers and magazines, so he could keep up with the cutting edge of European culture. His time overseas allowed him to keep a foot in both Japan and Europe, and he developed a comparative outlook, like the “two-footed student” mentioned in his sketch “Teiken sensei.” He actively applied this in his later creative and social activities. 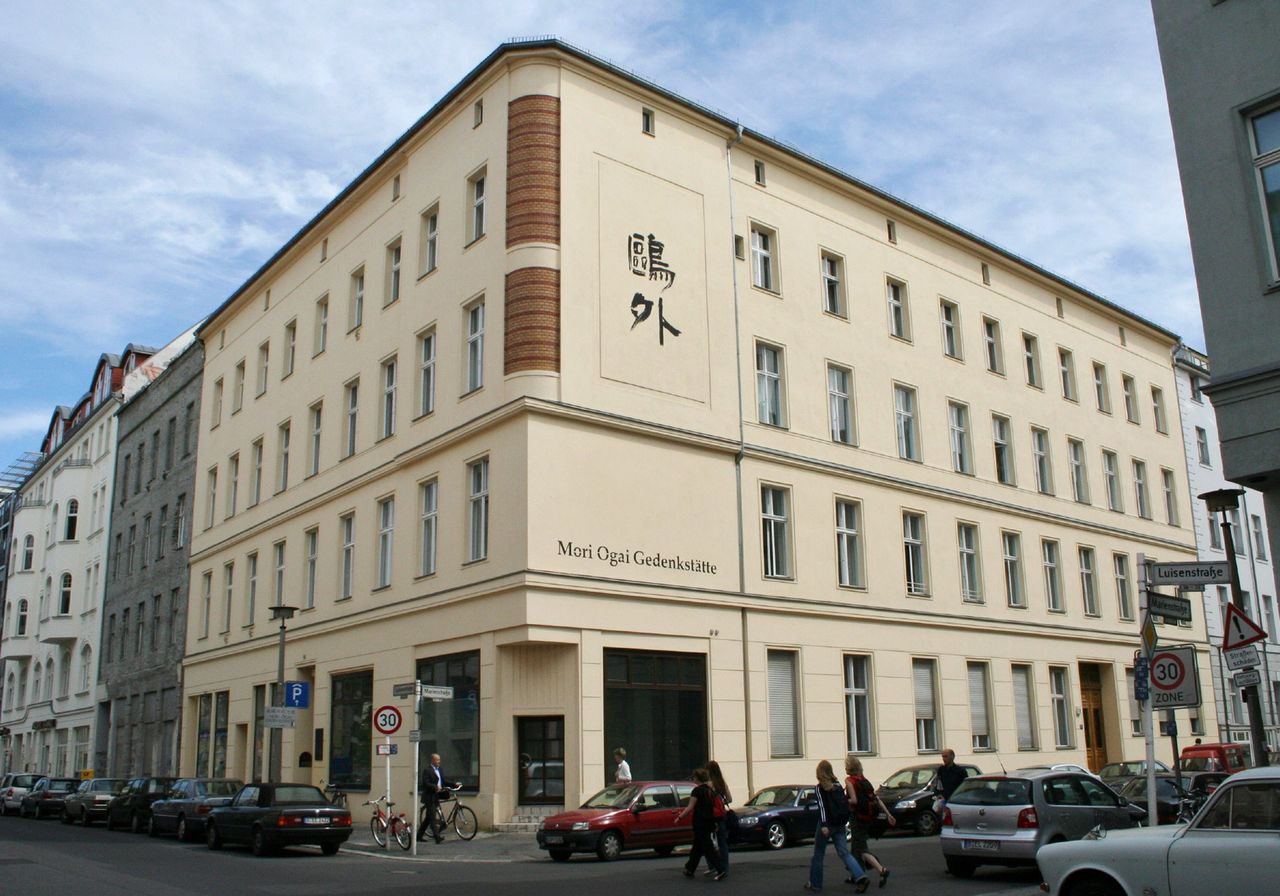 The Mori Ōgai Memorial Center in Berlin, with a design based on “Ōgai” (鷗外) written with brush and ink. The location is the same as where Ōgai first stayed in Berlin as a student. (© Jiji)

Back in Japan, Ōgai worked as an army surgeon, and made his literary debut by cowriting Omokage (Vestiges), an 1889 volume of translated poems. “The Dancing Girl” followed in 1890, along with many other original and translated works. He also self-published the magazine Shigarami-zōshi, including his own critical writings in which he deployed his knowledge of German literature and aesthetics in literary skirmishes. Through such combative, instructive activities, he became a guiding force at the dawn of modern Japanese literature.

Ōgai invigorated the literary world via his translations too. His version of Johann Wolfgang von Goethe’s poem “Mignon” appeared in Omokage, while other translated works included Hans Christian Andersen’s novel The Improvisatore and Goethe’s drama Faust. These had an immense influence on later poets and authors in Japan.

“The Dancing Girl,” the major work of his early period, has as its protagonist Ōta Toyotarō, an elite Japanese bureaucrat sent to Germany. Life in Berlin opens his eyes to the possibility of living as a free individual, and he falls in love with a poor dancing girl called Elise. However, this affair is an obstacle to his future career path in Japan, and after some distress, he abandons his pregnant lover and returns home. This story of cross-cultural encounters and conflict is written as a hybrid of Chinese-style kanbun, classical Japanese, and the style adopted for translations from European literature. 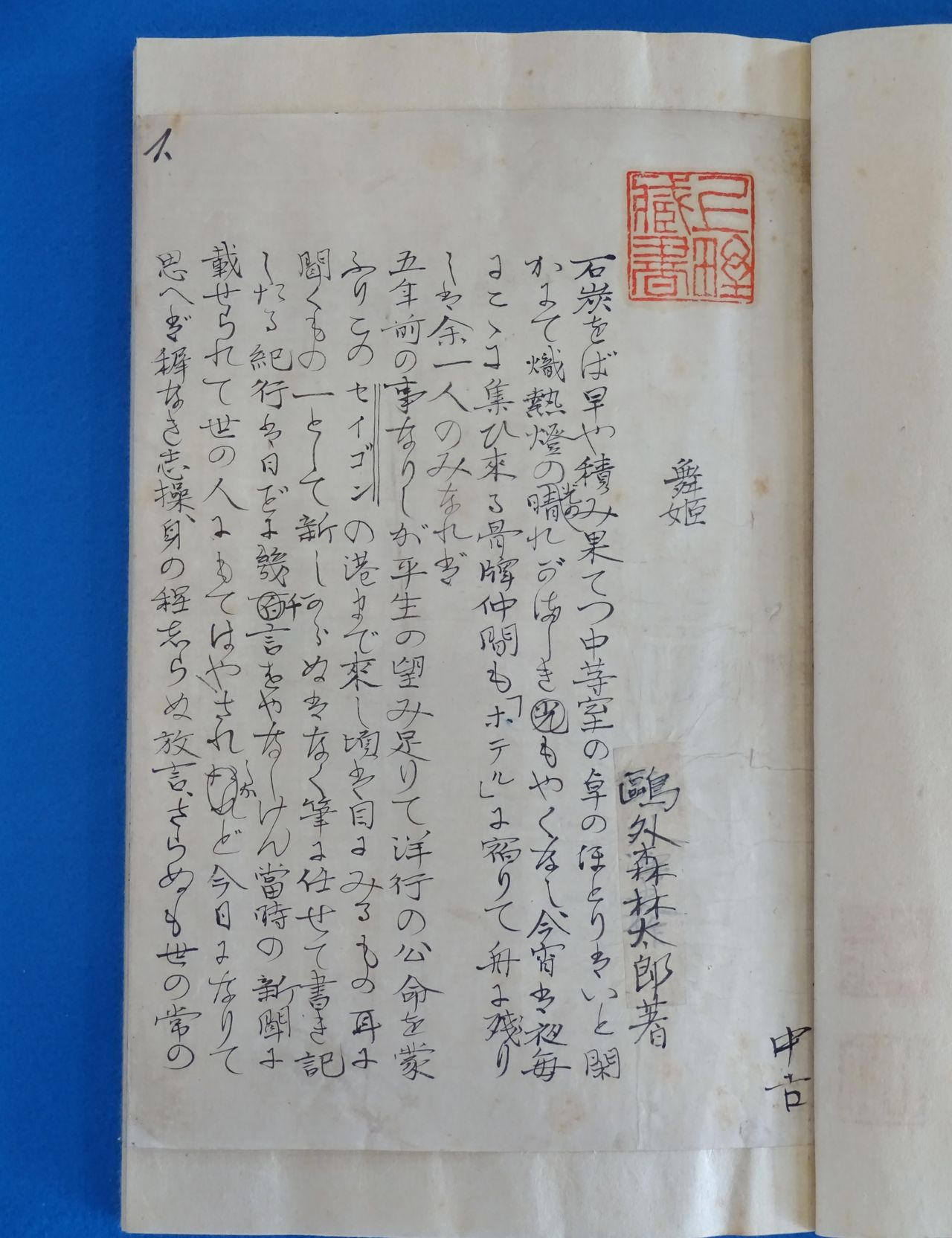 A handwritten manuscript by Mori Ōgai of “The Dancing Girl” made headlines when it went on sale at a book fair in 2015. (© Jiji)

The year after returning to Japan from Europe, Ōgai launched new magazines on hygiene and medicine, intended to lay a foundation for the development of modern medical techniques in the country. Just as in the literary field, he showed a pugnacious touch as he sought to educate. In 1897, he cowrote Eisei shinpen (A New Volume on Hygiene) with Koike Masanao, which was the first hygiene textbook written by Japanese authors.

A Turn to History

As a military surgeon, Ōgai trod the path toward leadership as a high official. He went with the army to the Sino-Japanese War (1894–95) and the Russo-Japanese War (1904–5). Between these conflicts, he was assigned to serve as the chief medical officer for the twelfth division in Kokura in the north of Kyūshū from 1899 to 1902. Ōgai saw this as a demotion, and was not pleased at being based in the city. Imagining that the military top brass disapproved of his double roles as army surgeon and author, he reined in his literary activities while in Kokura. Instead, he mastered French through lessons with a locally based French priest, and studied Zen and yuishiki (consciousness-only) teachings with a Zen priest. This was a period for acquiring knowledge and developing the mental preparedness for getting on in life.

In 1902, Ōgai returned to Tokyo at the age of 40 as the chief medical officer of the first division. Five years later, he was promoted to the top position of surgeon general, and became head of the Army Ministry’s medical division. No longer required to worry about his superior’s opinions, and despite his considerable duties, Ōgai published many new works. These included the 1909 novel Uita sekusuarisu (trans. by Kazuji Ninomiya & Sanford Goldstein as Vita Sexualis), in which the protagonist looks back on his sexual experiences and reflects on sexual desire, which was banned on publication. His 1910 story “Chinmoku no tō” (Tower of Silence) is critical of the government’s tightened control of academic and literary discussion after that year’s High Treason Incident, an alleged plot to assassinate the emperor. Around this time, Ōgai also wrote a number of works of fiction including shrewd critiques of contemporary society.

Emperor Meiji died in 1912, after ruling Japan for more than 40 years. General Nogi Maresuke’s subsequent ritual suicide shocked the nation. Ōgai was among those stunned by the death of one of the country’s leading military commanders, and the same year he wrote the historical story “Okitsu Yagoemon no isho” (trans. by Richard Bowring as “The Last Testament of Okitsu Yagoemon”), based on the real-life ritual suicide of a samurai in the early Edo period (1603–1868). This was the first of several historical stories based on actual materials, including works found in Japanese textbooks today like “Saigo no ikku” (trans. by David Dilworth and J. Thomas Rimer as “The Last Phrase”) and “Takasebune“ (trans. by Edmund R. Skrzypczak as “The Boat on the River Takase”). 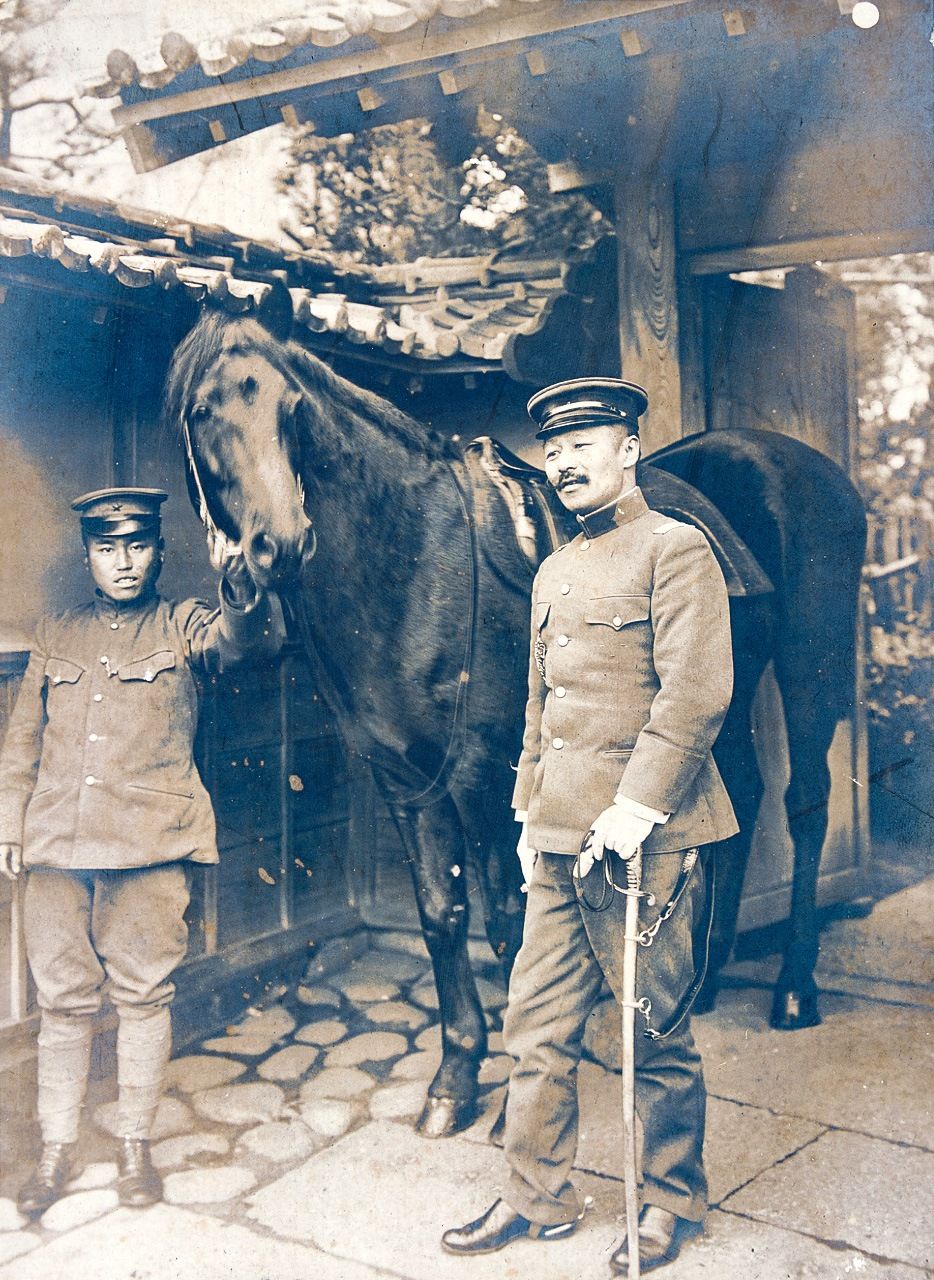 In 1916, Ōgai retired from the army at the age of 54. Around this time, his interest in historical exploration intensified, and he studied the lives and achievements of scholars of the late Edo period. His critical biographies of figures like Shibue Chūsai and Hōjō Katei blended historical research into fiction in an unprecedented style. The two men were scholars, physicians, and government officials, who also became involved in literature and the arts. This is to say that Ōgai wrote about men from an earlier generation with lives that resembled his own.

Ōgai became a bureaucrat in the Ministry for the Imperial Household in 1917, working as head of both the Tokyo Imperial Household Museum and the Bureau of Books and Charts. Emperor Taishō suffered from ill health, and the ministry saw the need to make preparations for the next imperial succession. Ōgai devoted himself to historical research, believing that the era name should be based on a firm academic grounding. Having completed one work in 1921 centered on his study of the posthumous names of historical emperors, he began to consider the question of the era name, but his health deteriorated and he left it unfinished. On July 9, 1922, Ōgai died of atrophic kidney and tuberculosis at the age of 60.

Mori Ōgai was a towering thinker in a number of fields. He mastered Japanese, Chinese, and Western learning, and pursued studies in his specialty of medicine, as well as other areas like aesthetics and historical research. He was also active as a military doctor and bureaucrat. In literature, he tried his hand at genres including fiction, criticism, drama, free verse, tanka, haiku, and kanshi (Chinese poetry), leaving to posterity many sophisticated and intellectually provocative works.

At home, Ōgai was apparently a doting father. He had four children who survived to adulthood with his two wives Toshiko—whom he divorced after one year—and Shige. After his death, all his children became authors and wrote of their loving memories of him. A lively image of Ōgai as Papa appears in works like the 1957 essay “Chichi no bōshi” (My Father’s Hat) by his eldest daughter Mori Mari and the 1936 essay “Bannen no chichi” (My Father in His Last Years) by his second daughter Kobori Annu.