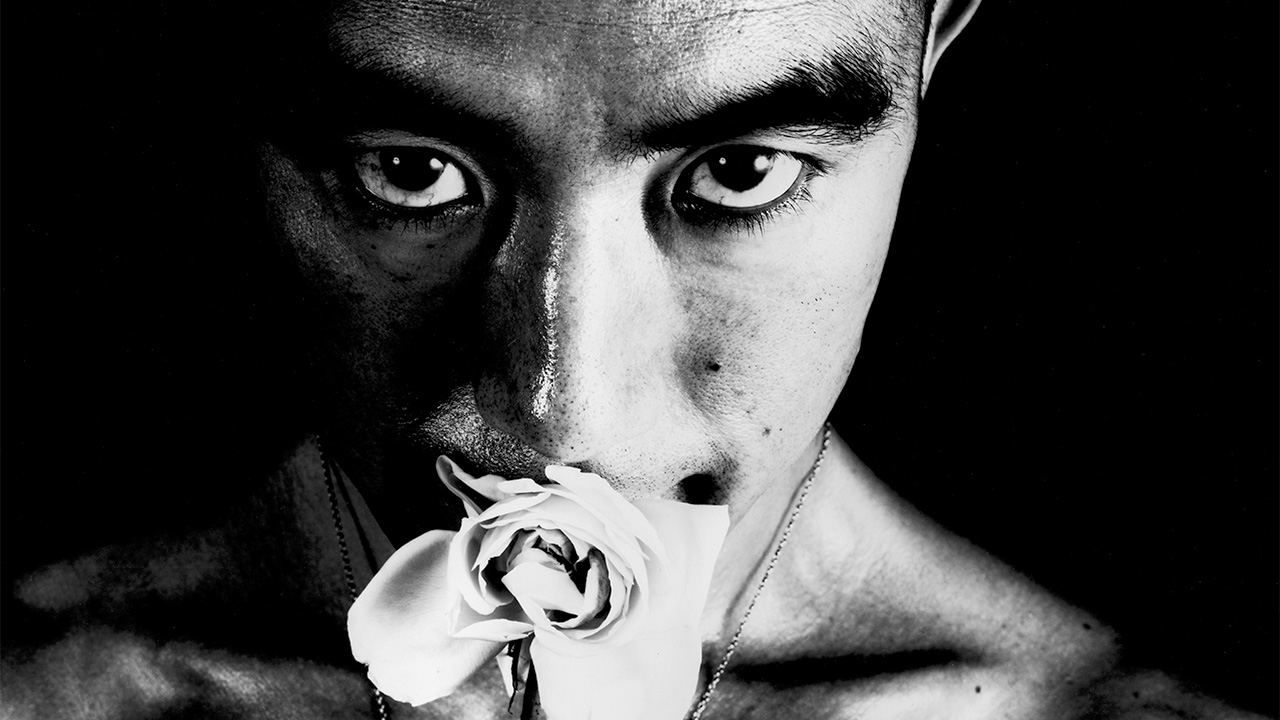 Culture Art Entertainment Nov 10, 2020
In 1963, one of Japan’s most promising young photographers collaborated with renowned author Mishima Yukio on Barakei (Ordeal by Roses) a remarkable collection of artistically creative photographs that used the author’s bodybuilder’s physique to stunning effect, creating an international sensation.

This year marks 50 years since Mishima Yukio’s (1925–70) spectacular suicide in November 1970. Events have been held around the world to commemorate the author’s life and work. Featuring somewhere at almost all these events have been the artfully posed photographs of Mishima taken by Hosoe Eikō (1933–) and published in 1963 under the title Barakei (Ordeal by Roses), one of the most original photo books of the twentieth century. The series features Mishima in a variety of poses, proudly showing off his muscular physique, the result of many years of dedicated bodybuilding. The photographs—taken between autumn 1961 and spring 1962, mostly at the writer’s home in the Magome district of Tokyo—encapsulated Mishima’s self-image and brought it to vivid life in photographs that used a variety of sophisticated techniques to create an astonishing world of provocative sensuality and sumptuous estheticism. Hosoe was 28 years old at the time, and one of the rising stars of Japanese art photography. 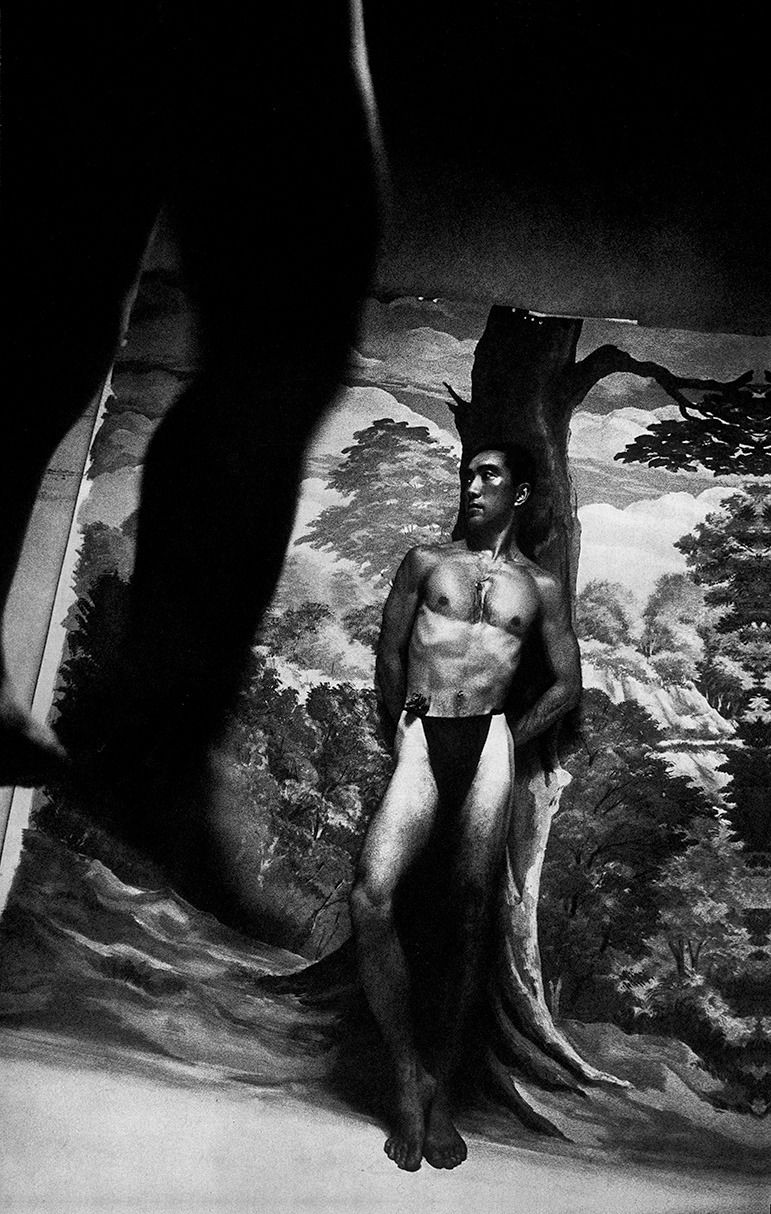 Visions of an Artist

The initial connection between Hosoe and Mishima came through choreographer Hijikata Tatsumi (1928–86), creator of the dynamic and revolutionary new butoh form of modern dance. Hijikata and Mishima were close friends, and in 1959 Hijikata developed a dance piece based on Mishima’s novel Kinjiki (Forbidden Colors). Hosoe attended a performance, and was immediately struck by the artistic possibilities of the thrilling new style of dance. He visited Hijikata backstage after the performance, and was soon taking photographs of Hijikata, the model Ishida Masako, and their fellow dancers. Hosoe used the bodies of these dancers to create a series of graphic images of “men and women, as human beings captured in the concreteness of sex,” (to borrow the phrase of photography critic Fukushima Tatsuo), in a series of strikingly vivid images, their unembellished rawness accentuated by the stark contrast between black and white. The images came out in book form in 1961, under the title Otoko to onna (Man and Woman).

Mishima saw this collection and other photographs of Hijikata and his troupe that were used in programs for the group’s performances, and became fascinated by Hosoe’s style. Via his editor, he approached Hosoe and commissioned him to take a new series of photographs. The first time they met, Mishima told the photographer: “I will give myself up to you as the subject matter for your camera. I want you to feel free to use me as you see fit and take whatever images your vision suggests.” Hosoe took Mishima’s words at face value, and proceeded to take a series of astonishing photographs whose shocking originality was a world apart from any kind of banal celebrity shoot or conventional author photo. At their first shoot, Hosoe wrapped a naked Mishima in garden hose and stood him on marble flagstones depicting an elliptical mosaic zodiac, with one end of the hose in his mouth. Mishima stands with a mallet in his right hand, Hosoe looking down at him from a stepladder, Mishima staring intensely into the camera with a gaze that seems to contain all the power of his muscular physique. 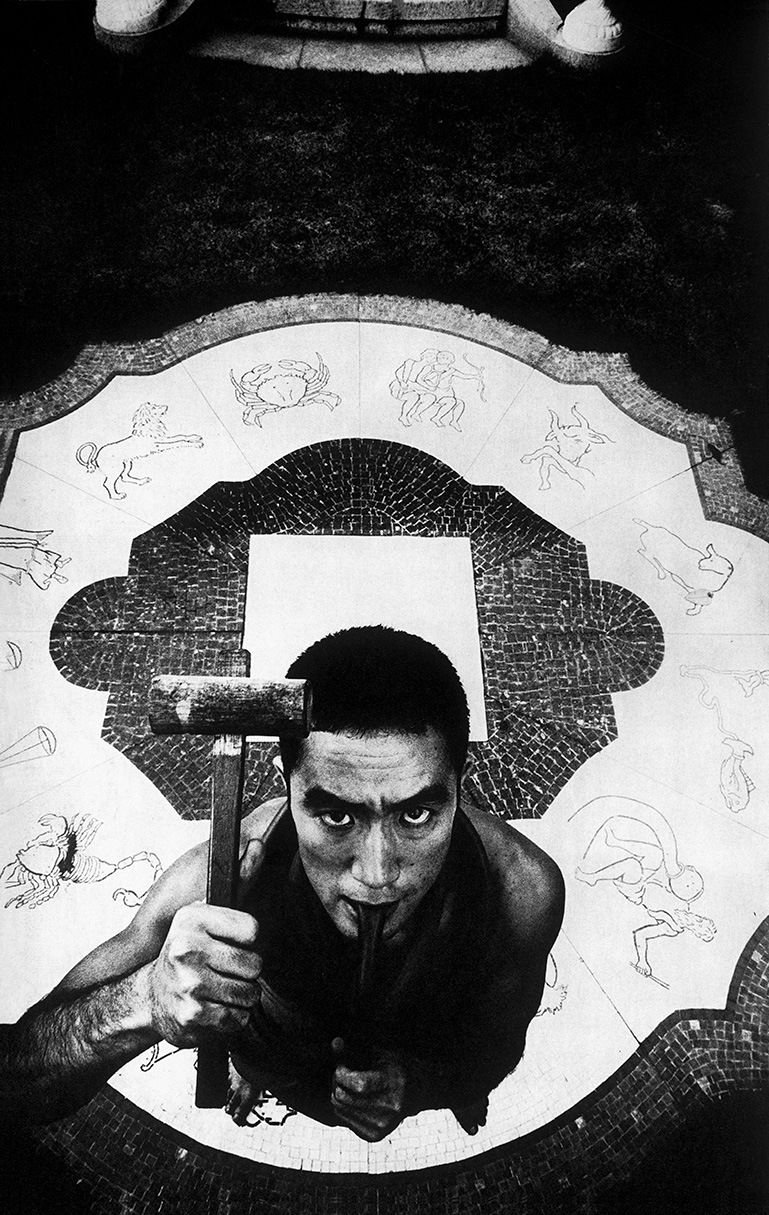 Mishima loved these groundbreaking photographs, which seemed to refuse any attempt at straightforward interpretation, and the two men agreed to meet again for further sessions. For the second shoot and the remainder of their collaboration, Mishima sent his wife and children out of the house before shooting started, claiming that the decadent photographer and his friends would have a “bad influence on their morals.” The images often incorporated elements from Mishima’s favorite works of art, such as “Sleeping Venus” by the Venetian painter Georgione, and Botticelli’s “Birth of Venus.” Mishima invited Hijikata and his troupe to his house and posed with them, as well as posing for several shots with the actress Enami Kyōko (1942–2018). Occasionally the collaborators left the Mishima residence to shoot in other locations, including a building site on the grounds of a church strewn with red bricks. 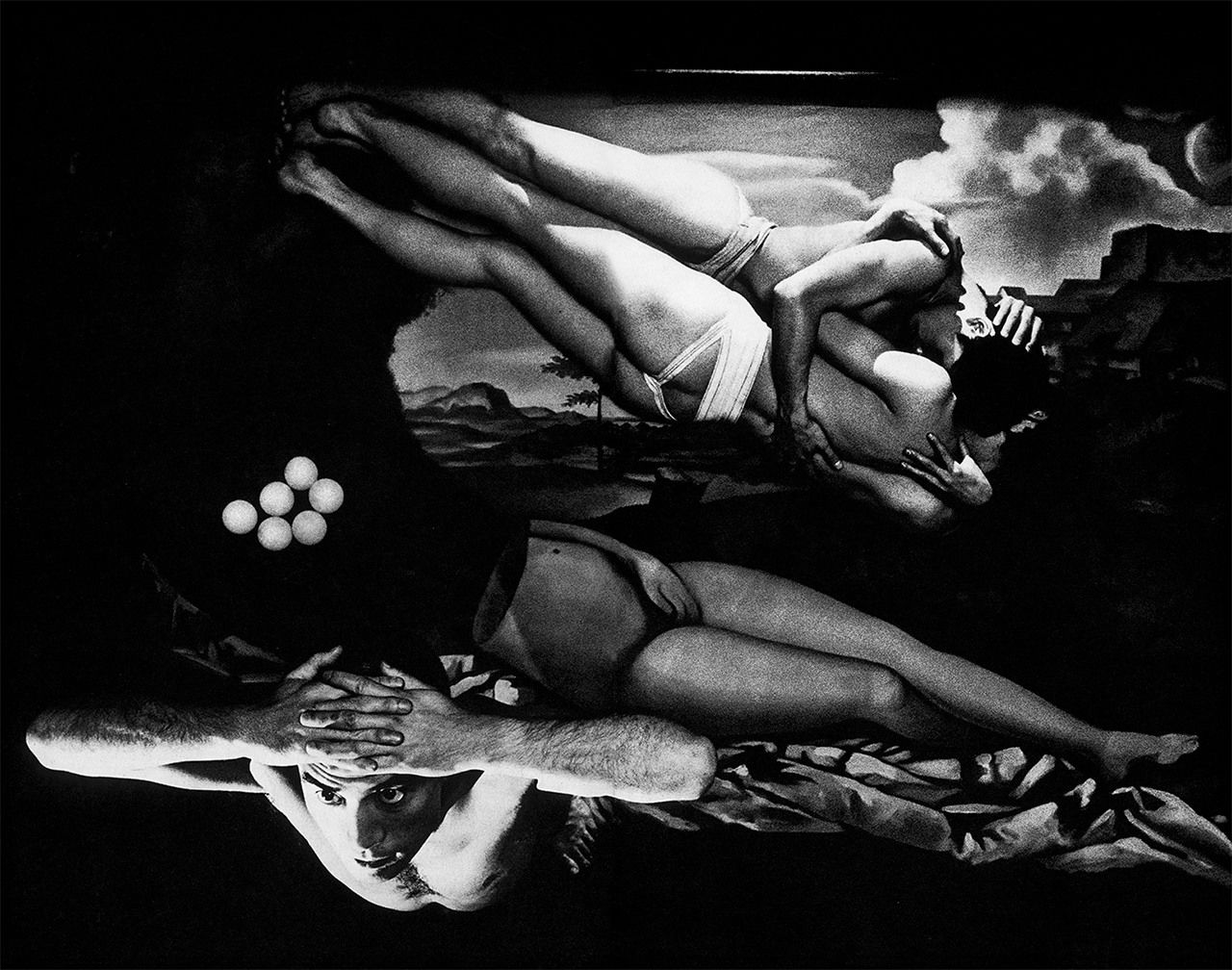 Gradually, a vision took shape that Mishima described in the following terms in his preface to the photographs when they were published in book form: “The world to which I was abducted under the spell of his lens was abnormal, warped, sarcastic, grotesque, savage, and promiscuous . . . yet there was a clear undercurrent of lyricism murmuring gently through its unseen conduits.”

One of the people who played an important role in the darkroom, helping to develop and print the images, was Moriyama Daidō, who later became a well-known photographer in his own right. Moriyama had moved from Osaka to Tokyo in 1961 and was working as Hosoe’s assistant. The Mishima project was one of his first assignments. It was not an easy job, responding to the ideas as they poured from Hosoe and trying to make them a reality. Moriyama remembers the difficulties he faced in the darkroom, where he had to call on all his skills and ingenuity to print images that would match Hosoe’s vision, using low sensitivity mini-copy film, then lowering the sensitivity even further and combining several negatives into a composite montage. Moriyama Daidō later became known for his peerless skills in finishing and developing his prints. It is fair to say that much of the groundwork for his subsequent career was laid down during this period working with Hosoe on his pictures of Mishima. 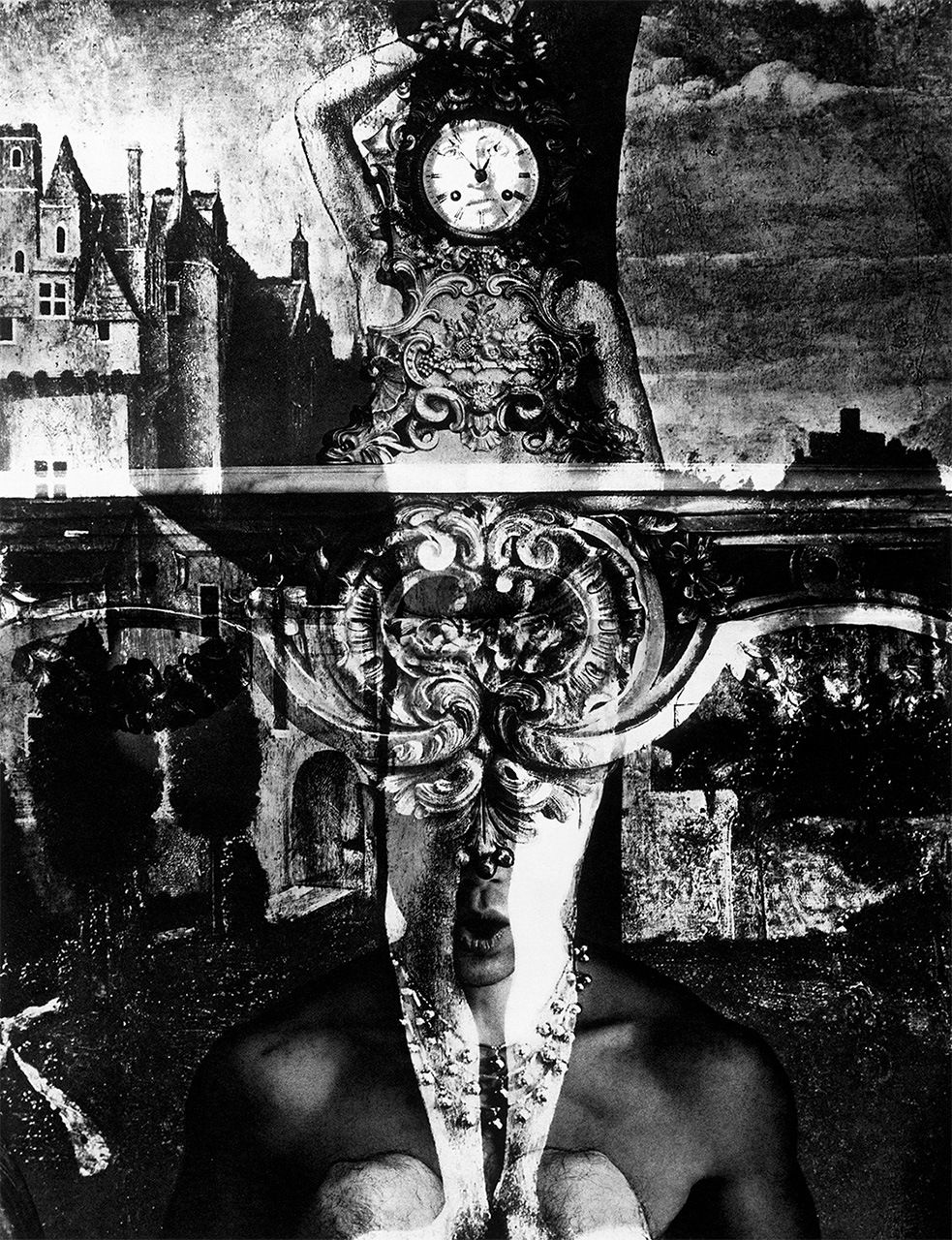 Mishima’s Esthetics of Life and Death

The first of the photographs appeared on the cover and frontispiece of Bi no shūgeki (Assault of Beauty), a collection of Mishima’s critical essays published by Kōdansha in 1961. They were then displayed at the Non exhibition at the Matsuya Department Store in Ginza, Tokyo, in January 1962, organized by Fukushima Tatsuo, with the participation of leading photographers including Narahara Ikkō (1931–2020), Tōmatsu Shōmei (1932–2012), Kawada Kikuji (1933–), Ishimoto Yasuhiro (1921–2012), and Imai Hisae (1931–2009).

Then, in March 1963, the photographs were published as Barakei (which originally carried the English title “Killed by Roses,” later amended to “Ordeal by Roses”), in a large-format luxury book designed and bound by designer Sugiura Kōhei (1932–). The photographs were presented in five chapters: “Chapter One: Preface,” “Chapter Two: Daily Civilian Life,” “Chapter Three: The Scornful Clock, or the Slothful Witness,” “Chapter Four: Various Blasphemies,” and “Chapter Five: Ordeal by Roses.” 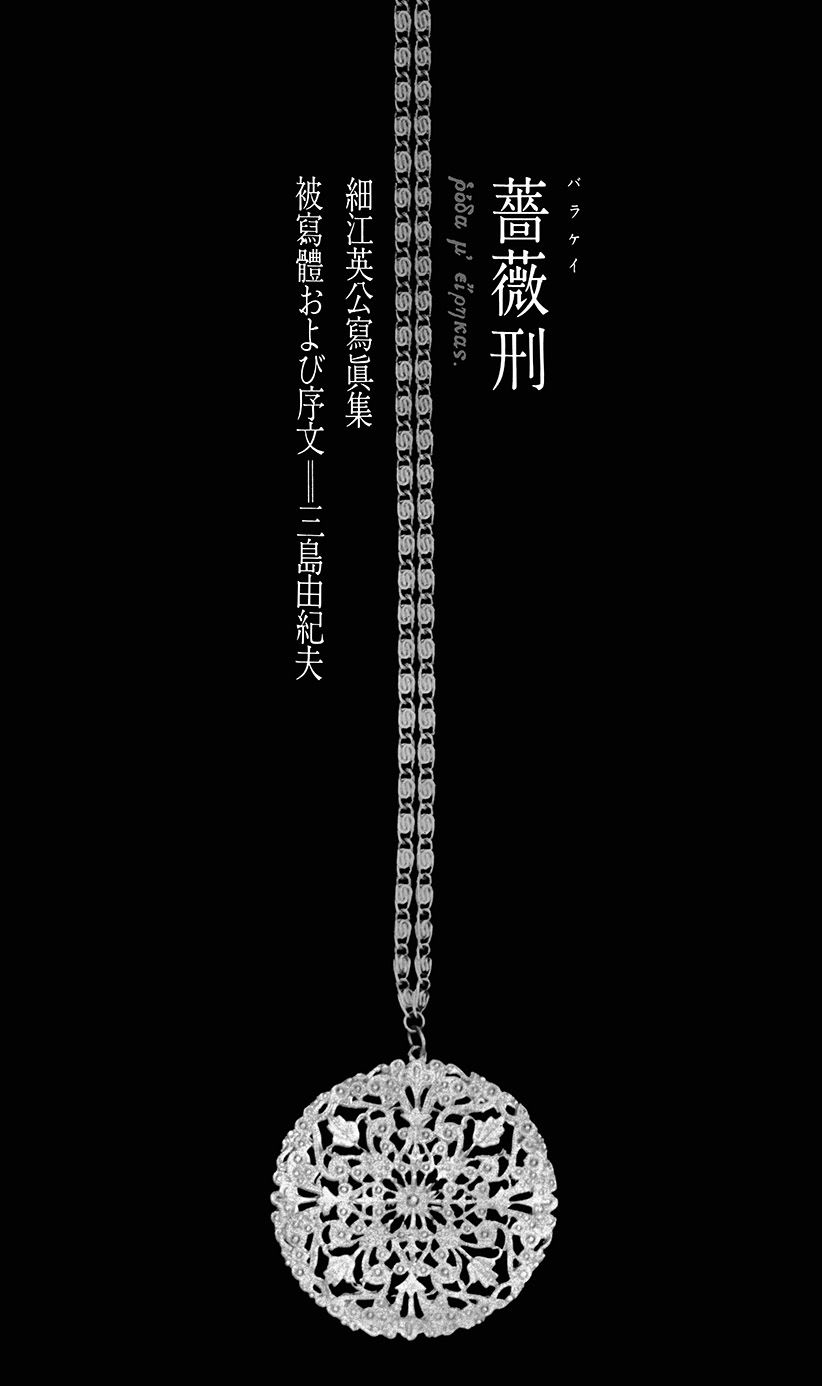 The large-format edition of Barakei, designed by Sugiura Kōhei and published in 1963.

Once a decision was made to publish the photographs in book form, Hosoe wrote to Mishima and asked him to suggest a title. Mishima replied with several suggestions: “Sketches of Martyrdom,” “Man and Roses,” “Passion Variations,” “Death and Loquaciousness,” and Barakei or “Ordeal by Roses,” (literally “punishment by roses,” rendered as “Killed by Roses” in the first edition). Hosoe knew as soon as he saw it that this last suggestion should be the title: it struck him as the perfect encapsulation of Mishima’s esthetic values and his view of life and death. The book was critically well received, and won a prize that year.

Plans for a Revised Edition, Delayed by Seppuku

Hosoe continued to develop his vision, working again with Hijikata Tatsumi on the collection Kamaitachi, named after a legendary weasel-like demon native to the rural Tōhoku region where both men had grown up. Published by Gendai Shichōsha in 1969, the photos showed Hijikata alongside ordinary local people. But the earlier Mishima collection continued to play on Hosoe’s mind. In 1970, a plan arose for a new, international edition of Barakei. The design would be the responsibility this time of Yokoo Tadanori (1936–). After consultation between Hosoe, Mishima, and Yokoo, it was decided to make a number of significant changes to the composition and layout of the photographs. The book was scheduled to come out in November that year, but had to be postponed for a month or so when Yokoo was involved in a car accident.

The galleys for the new edition were shown for the first time at an exhibition on Mishima at the Tōbu Department store in Ikebukuro in October that year. One section of the exhibit featured enlarged images from Barakei under the title “River of Flesh.” Hosoe was struck by a comment Mishima had written for the exhibition: “I will never accept the decay of the flesh.” Around the same time, Mishima delivered the manuscript for a preface he had promised to write for Hosoe’s photography collection Hōyō (Embrace), considerably ahead of schedule: this too was quite out of the ordinary.

Despite these omens, Mishima’s spectacular suicide by seppuku or ritual disembowelment at the Self-Defense Forces headquarters at Ichigaya on November 25, 1970 came as a complete shock. Hosoe immediately suspended work on the new edition of his book—he simply did not know how his photographs of Mishima would be received by the media in the chaos after the author’s death. But the bigger reason had to do with his pride: He did not want anyone to think he was “cashing in” on Mishima’s death by publishing a book of photographs certain to attract controversy so soon after the author’s suicide.

But a phone call from Mishima’s wife Yōko persuaded him to change his mind. “I hope you will go ahead with plans to publish the new edition of the book. My husband was looking forward to it so much.” Following a quick change of plan, the new edition of Barakei saw the light of day after all. The international edition Barakei (Ordeal by Roses) was published by Shūeisha International in January 1971.

The new edition of Barakei, designed by Yokoo Tadanori and published in 1971. The box containing the collection of photographs opens to reveal a Buddhist-influenced, Indian-style picture of Mishima.

A Collaboration Between Two Uncompromising Artists

Looking at Barakei anew all these years later is to be reminded of how distinctive and special the book was. The slipcase for the original edition attributes the book to “Hosoe Eikō: Photographs; Mishima Yukio: Subject and Preface.” The message was clear: this was a collaboration between two artists in a relationship of equality.

Mishima certainly lived up to his promise to become the “subject matter” for Hosoe’s photos. But he remained a commanding, indelible presence throughout the shoot: in his own house, richly imbued as it was with its owner’s distinctive sense of esthetics, surrounded by the furniture and fittings he had chosen himself, and showing off the toned muscular physique of which he was so proud, Mishima had something of the air of a prowling tiger patrolling his territory. Hosoe refused to take a backward step before this charismatic and dominating personality, maintaining his own individuality and vision as a photographer in the face of one of the dominant writers of his time, manipulating and controlling him just as he would a dancer or bodybuilder or any other model. The result was a competitive collaboration between two gifted artistic sensibilities, the writer and the photographer engaged in an artistic arm-wrestle, each refusing to yield to the other. This remarkable collection of photographs remains a fitting testament to the integrity and vision of two proudly independent artists.

(Originally published in Japanese on October 7, 2020. All photographs by Hosoe Eikō. With thanks to the office of Hosoe Eikō. Banner photo: Barakei (Ordeal by Roses) # 32, 1961.)