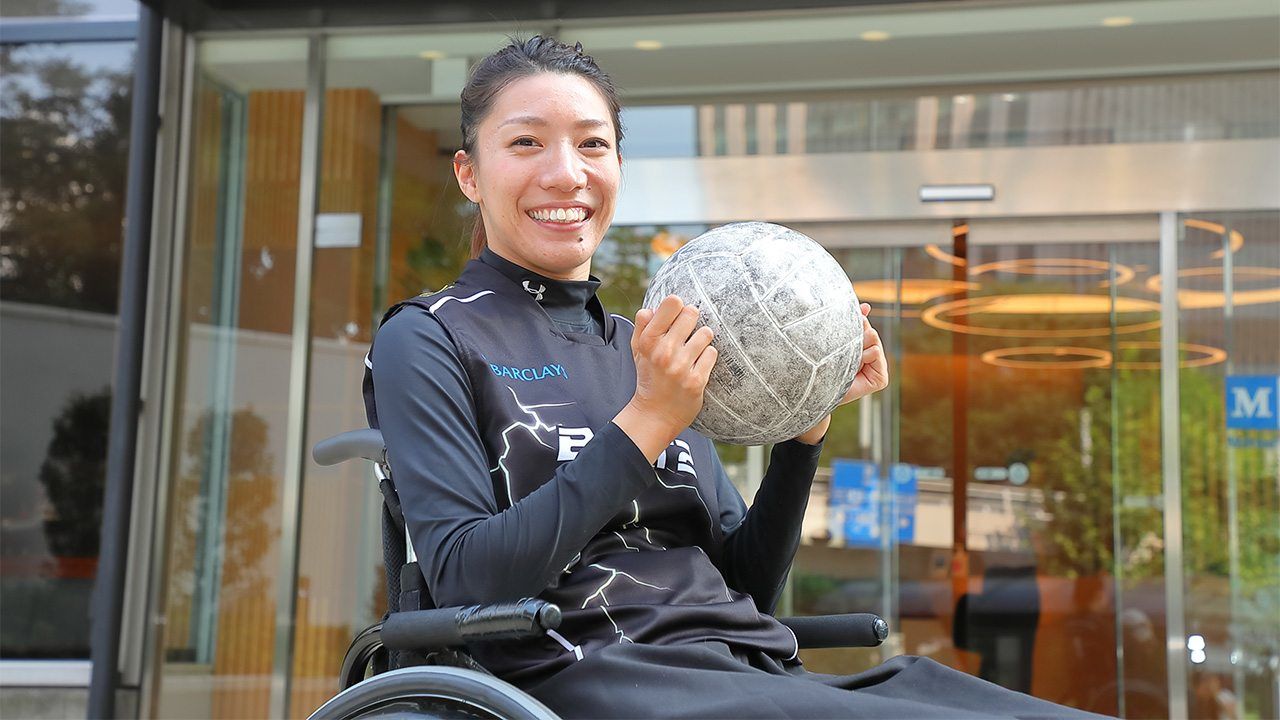 People Sports Sep 25, 2019
Kurahashi Kae, the first female member of the Japanese national wheelchair rugby team, was part of the squad that won gold at the 2018 world championships. The defender shares her story and why she loves the rough-and-tumble sport known by some as “murderball.” 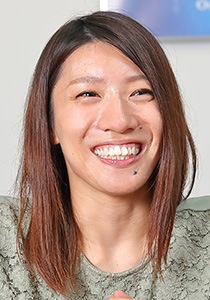 Born in Kobe in 1990. Started playing wheelchair rugby as part of her rehabilitation from a trampoline accident that left her partially paralyzed. In 2015 joined wheelchair rugby team Blitz. Began working at Mitsui OSK Lines after graduating from university. In 2017 was selected as the first female member of the Japanese wheelchair rugby national team.

The court resounds with the clash of metal frames and the sound of bodies hitting the hardwood floor. The crowd, intent on the action, cheers wildly as a player in a reinforced wheelchair catches a pass and punches across the goal line to score. The sport is wheelchair rugby, a fast-paced, hard-hitting competition that combines speed, strategy, and finesse with brawn and bone-jarring collisions. Once known as murderball, it draws players—and fans—with a taste for head-to-head action.

Over the last decade the Japanese national team has slowly forged a reputation as a top contender in the sport. In 2018, the squad took top honors at the International Wheelchair Rugby Federation World Championship in Sydney, defeating powerhouse Australia on its home turf to capture Japan’s first gold at the competition.

Defender Kurahashi Kae played a pivotal role in the team’s historic run at the tournament. In the final, she helped shut down Australia’s ace attacker Chris Bond in the last seconds to secure Japan a narrow 62–61 victory. As the sole female player on the Japanese team, she is looking to put her skills to the test at the 2020 Paralympics in Tokyo.

The win over Australia was a defining moment for Japan, and one that Kurahashi still recalls vividly. “It was a grueling battle,” she says. “Whichever side outlasted the other was going to win.” With Japan up by one point and only a few seconds left on the clock, an exhausted Kurahashi mustered her remaining energy to keep up the defensive pressure, wheeling into position to block the Australian attack. “I was so drained that when the final whistle blew I had no idea if we’d won or lost.”

Kurahashi received much-deserved accolades for her dogged defense. However, she remains humble and insists that she needs to polish her tactic, remarking with a grin that “there’s plenty of room for improvement.” 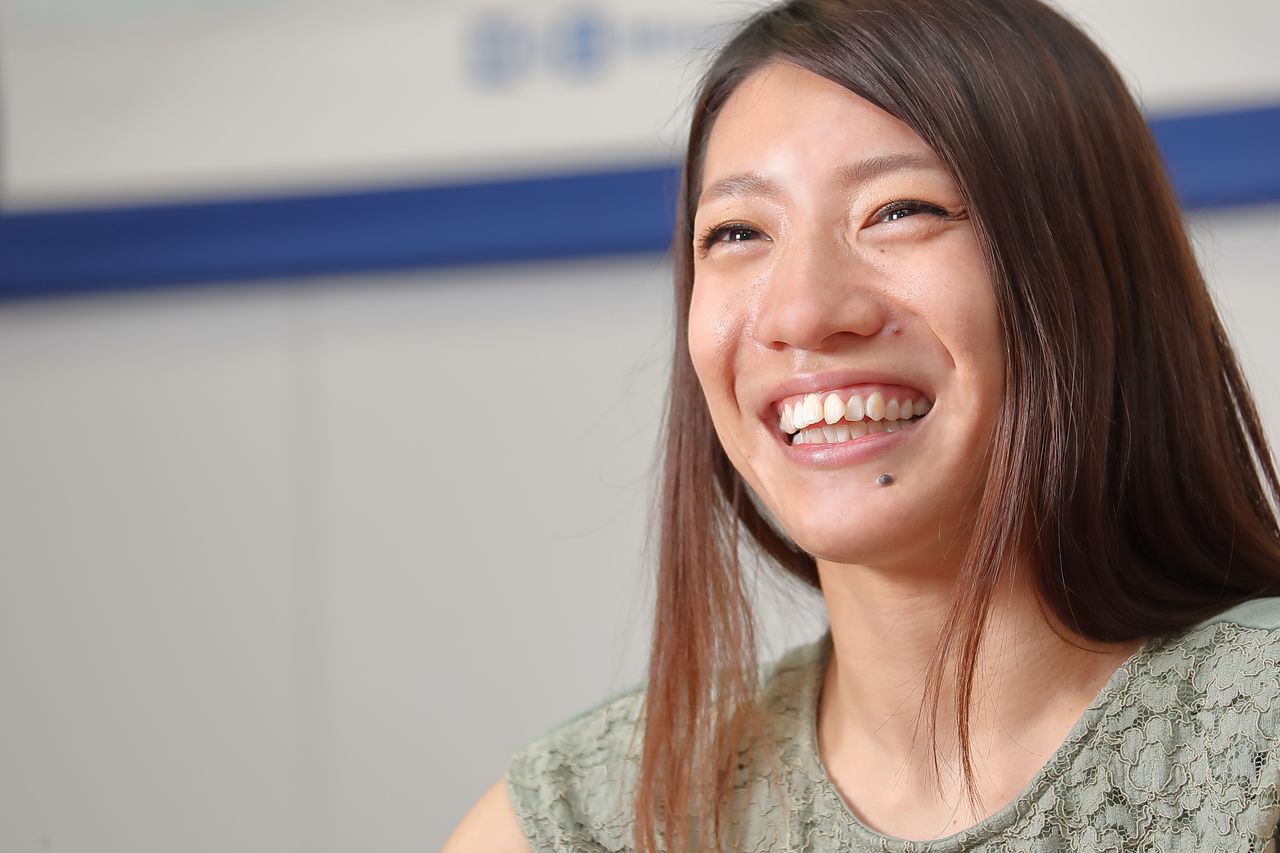 Wheelchair rugby is a four-on-four, mixed-gender sport. It is played on a 28-by-15-meter hardwood floor—the same dimensions as a standard international basketball court—using a specially designed ball similar to a volleyball. Players are assigned one of seven point values according to their functional level, ranging from 0.5 to 3.5. Each side can field a team totaling a maximum value of 8 points, with a 0.5-point reduction given for each female competitor. High-point players have greater mobility and typically play offensive positions, while low-point players like Kurahashi excel in defensive roles.

There are few female wheelchair rugby players who compete on the international stage, and fewer still who are tapped for big games. However, Japan skipper Kevin Orr recognized Kurahashi’s potential early on and has given her steady playing time. 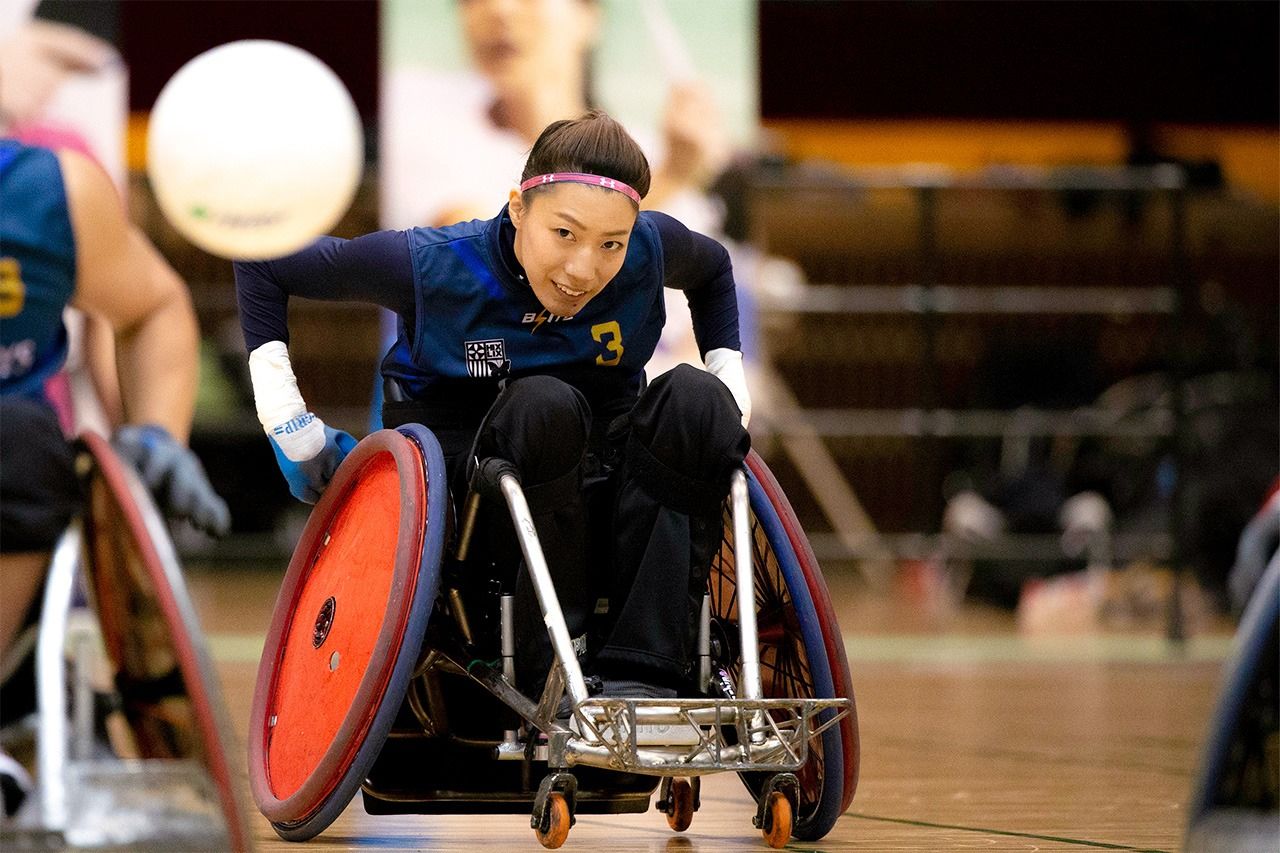 Kurahashi Kae during a game in Tokyo in October 2018. (© Takaba Kinzō)

No Stranger to Calamity

Kurahashi was born and raised in Kobe, Hyōgo Prefecture. The middle of three sisters, she admits to being a tomboy during her early years. In 1995, at the age of four, she experienced the Hanshin-Awaji Earthquake that devastated Kobe and surrounding areas. The building where she lived was heavily damaged in the quake and she remembers having to escape with her family through the window of their first-floor apartment. Outside she was met by terrifying scenes of destruction. “There were fires all over the neighborhood,” she recounts. “We managed to make it to an emergency evacuation shelter, but it was so full that I kept stepping on people sleeping on the floor.”

An energetic child, Kurahashi took up gymnastics in elementary school, continuing the sport through high school. In university she switched to the trampoline, but in her junior year she had an accident that would change her life. While practicing her routine during a tournament, she lost her balance and fell, injuring her spine and leaving her partially paralyzed.

“I wasn’t fully conscious, but I remember being determined to stay awake until I reached the hospital,” she says. Despite the severity of her condition—doctors told her family to be prepared for the worst—Kurahashi was surprisingly calm. “I knew I would make it through, and even if I couldn’t move my arms and legs I could still get around in a wheelchair.” Instead of lamenting her fate during her long hospitalization, she preferred to keep her eyes set on what lay ahead.

After six months in the hospital, she moved to a rehabilitation center in Kobe with the goal of returning to her university studies. The accident had left her paralyzed from the waist down and with limited function in her hands. No longer able to straighten her fingers, she learned to use assistive devices for basic activities like eating, writing, and brushing her teeth. Although she says her functional level has not improved since the accident, she has learned how to adapt to her disability and is able to live on her own. “I’m independent and quite proud of it,” she exclaims.

In 2013 she transferred to the National Rehabilitation Center for Persons with Disabilities near her university in Saitama Prefecture. During her time there a fellow resident invited her to join the institute’s wheelchair rugby team. Kurahashi was uncertain at first, but was won over to the sport after watching a single practice.

In 2015 she joined Blitz, a wheelchair rugby club based in Saitama. After just two years in the sport, she caught the eye of Kevin Orr, the newly appointed head coach of Japan’s national squad, with her determined playing style. Now a key member of the national team, Kurahashi divides her time between her job at Mitsui OSK Lines, where she works two days a week, and training for wheelchair rugby.

Although smaller than many of her opponents, Kurahashi enjoys the hard-hitting aspect of the sport. Smiling, she insists that “it’s likely the only para event where you can crash into other players.” She especially relishes the big hits. “It takes a few moments to recover after checking a brawny forward who is barreling down the floor. But jolts like that are the best.”

Kurahashi says that part of her training for Tokyo 2020 involves putting on a few more kilograms. “The team is dead-set on winning, so I need to bulk up a little in order to block even harder.” Come the Paralympic games, fans can expect to see her in the thick of the action as Japan fights for gold. 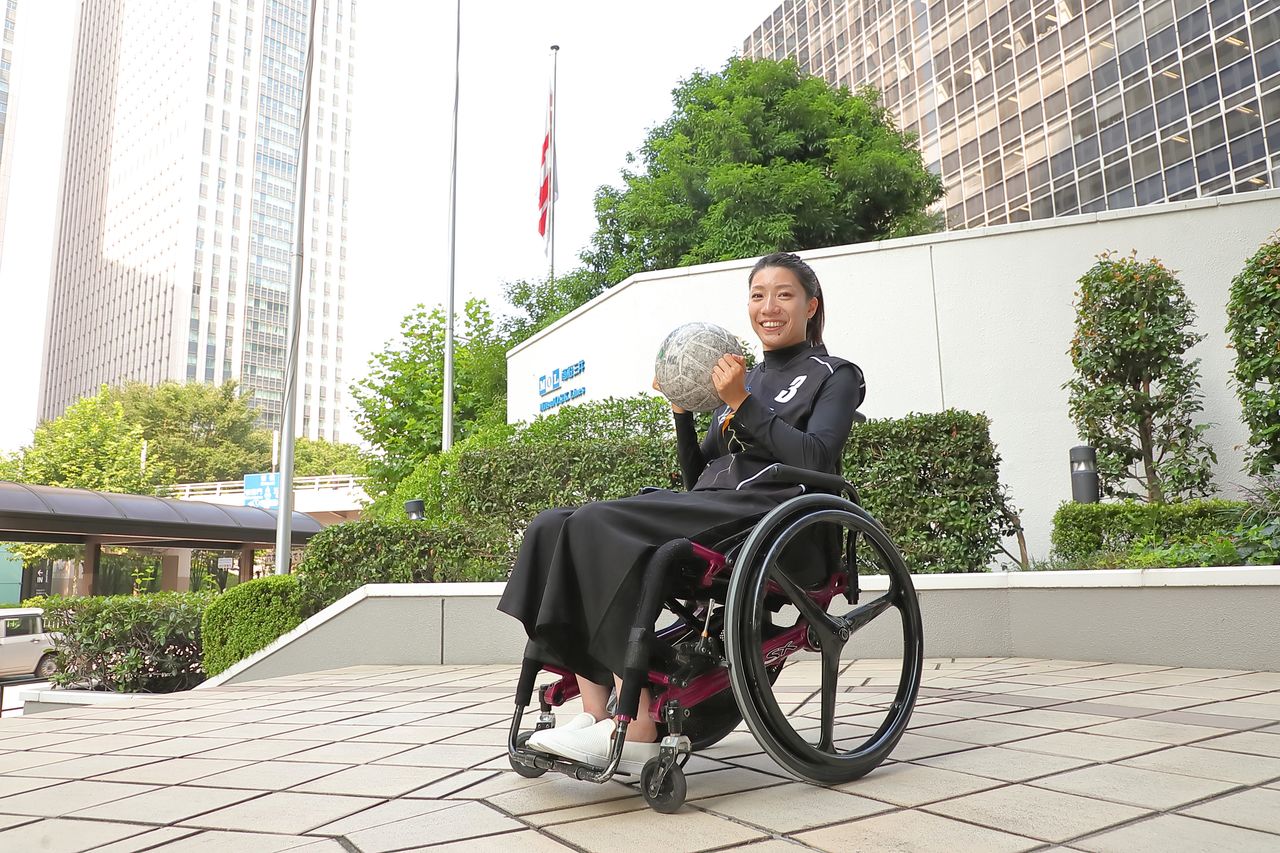 Kurahashi Kae outside the head office of Mitsui OSK Lines in Tokyo.