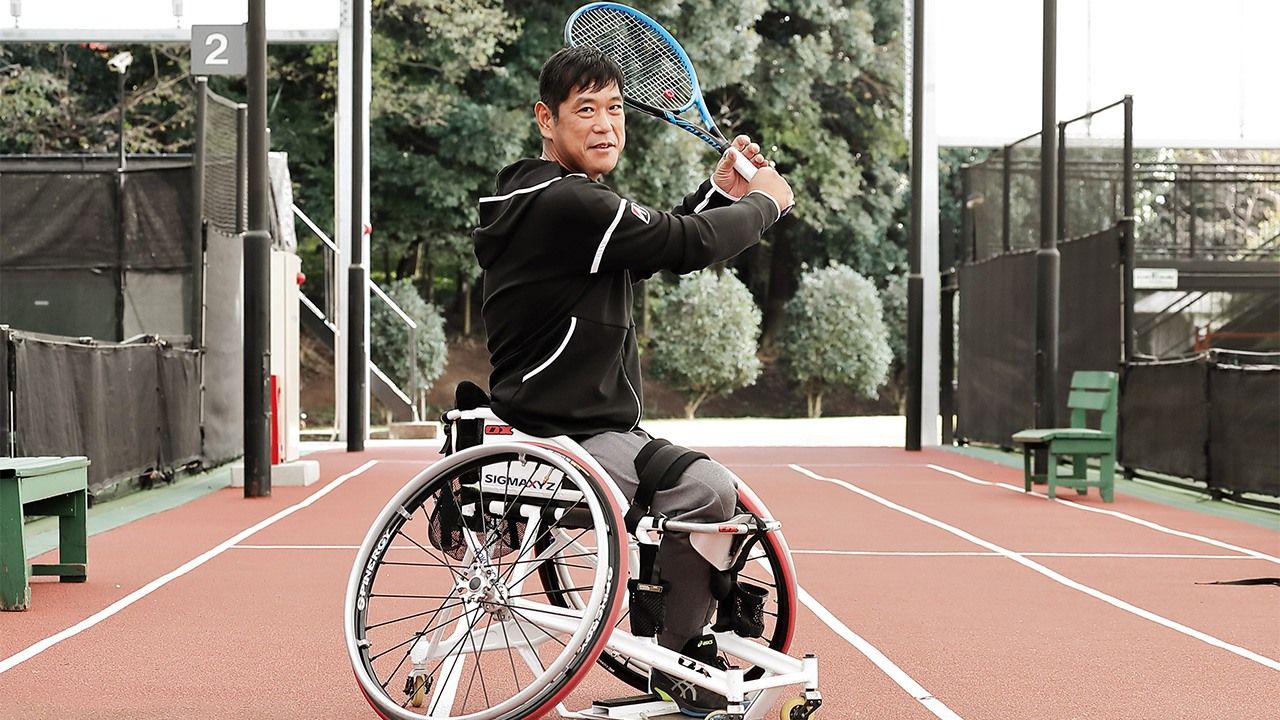 People Sports Tokyo 2020 Jan 14, 2020
Wheelchair tennis player Saida Satoshi has competed at six Paralympics, medaling in three of them. He expects to be on the court at Tokyo 2020 for a record-tying seventh appearance. 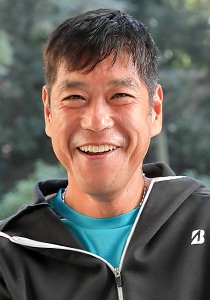 Wheelchair tennis player. Born in Mie Prefecture in 1972. He lost his left leg to bone cancer when he was 12. Has competed in six straight Paralympic Games, starting with Atlanta in 1996, winning gold in the men’s doubles at Athens in 2004 and bronze in Beijing in 2008 and again in Rio in 2016. In 2003, became the first Japanese player to receive a world player award from the International Tennis Federation. He is sponsored by business consulting firm Sigmaxyz.

A Lasting Force in His Sport

Meeting veteran wheelchair tennis player Saida Satoshi, it is hard not to marvel at the accomplished veteran. A top competitor for more than two decades, he made his Paralympic debut at Atlanta in 1996, starting a streak that has lasted for six straight games. The 47-year-old hopes to make Tokyo 2020 his seventh outing, an accomplishment that will put him alongside legendary wheelchair racer Nagao Yoshifumi for the most Paralympic appearances.

Saida is a pioneer, having started his career at a time when there was little interest in para sports and only nominal support for disabled athletes. Through hard work on and off the court, he has raised the profile of wheelchair tennis among the general public in Japan and helped pave the way for later players like top-ranked stars Kunieda Shingo and Kamiji Yui.

No stranger to the award podium, Saida over his career has claimed numerous titles and honors. In 2003, the International Tennis Federation gave him a world player award, a first for a Japanese competitor. In 2003 and 2007 he was a member of Japan’s World Team Cup championship squad. He won his first Paralympic medal in 2004 at the Athens games, teaming up with Kunieda to take the gold in the men’s doubles; the pair would go on to claim bronze at Beijing in 2008 and Rio de Janeiro in 2016.

Looking back over his accomplishments, Saida considers his first Paralympics in Atlanta the true starting point of his career. He says he went into the 1996 games unaware of what he was getting into and quickly found himself at the mercy of the competition. “I was completely out of my league,” he exclaims. Outmatched physically and technically, he bowed out of both the singles and doubles competitions in just the second round.

He looks back on his match against Australian David Hall as a seminal moment. Hall was a dominate force in wheelchair tennis in the 1990s and early 2000s, and when the bracket pitted him against Saida in the second round the Japanese player knew he had his work cut out for him. When the two wheeled onto the court, though, Hall played with even greater intensity than usual, making quick work of his Japanese opponent. Saida had competed in other international tournaments, but the drubbing showed him that the level of competitiveness at the Paralympics was something altogether different. 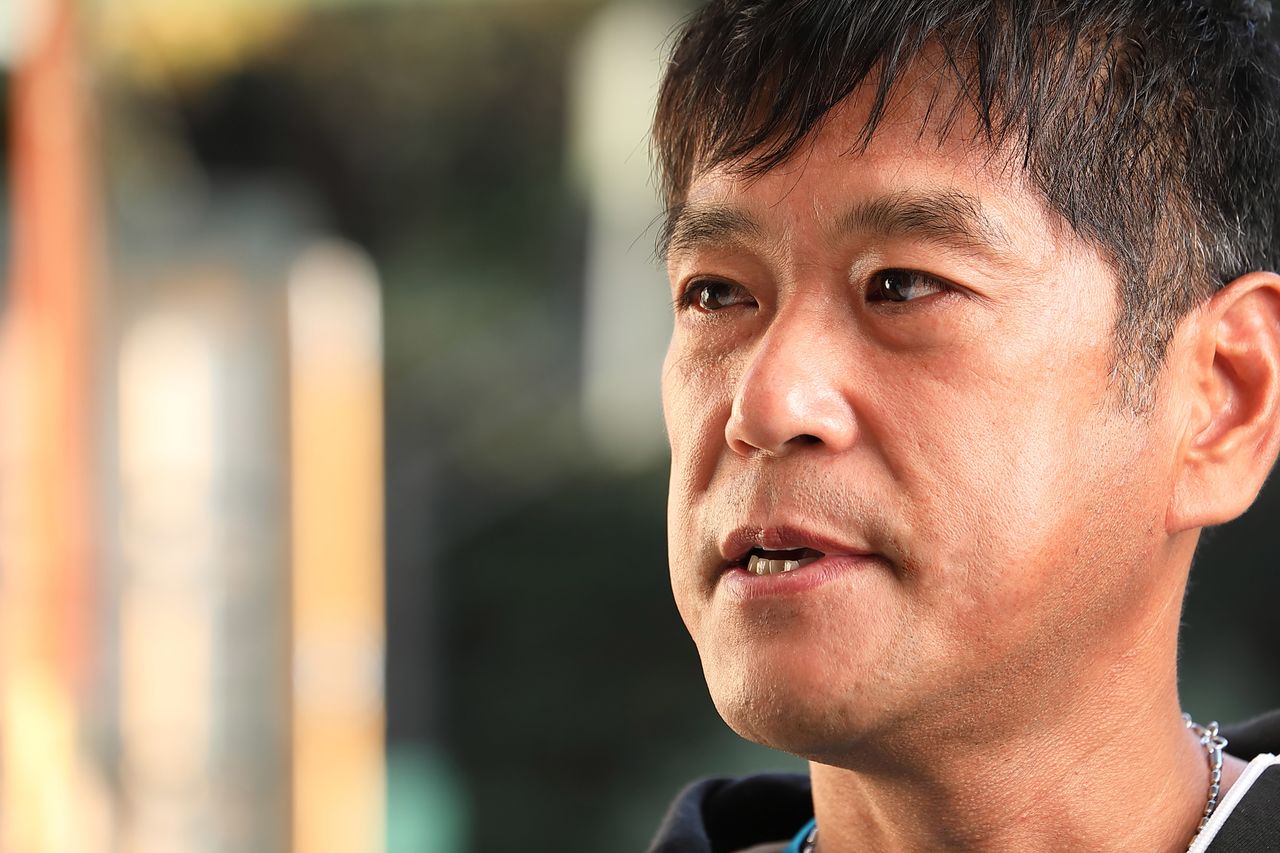 Just two years out of university, Saida was working as a civil servant, a job that gave him scant time to practice. Licking his wounds from Atlanta, he realized that if he wanted to compete on the international stage he would need to get serious about training. However, para sports at the time were still largely viewed as rehabilitative pursuits, and few disabled athletes could offer Saida a roadmap for turning pro.

While he was determined to make tennis his career, he still had to figure out how he would pay the bills. He mulled over the idea of leaving his job as a public servant, but the uncertainty of eking out an existence playing the circuit made him reluctant to give up his steady paycheck.

Stuck at the crossroads, Saida says he received a firm push toward his dream from Yoshida Munehiro, chair of the Yoshida Memorial Tennis Training Center in Kashiwa, Chiba Prefecture. “Yoshida encouraged me to give it a go,” he recalls. “I’m 180 centimeters tall, and as he saw it, I had a good shot at succeeding and opening the way for other Japanese players.” Saida also received a helping hand in turning pro from Ishii Shigeyuki, founder of Chiba-based wheelchair maker OX Engineering, who took him on under a special contract that allowed him to focus on playing tennis.

After three years sitting on the fence, Saida in 1999 pulled up roots and moved to Chiba from his native Mie Prefecture to join OX and to train at Yoshida’s tennis center, which remains his base to this day. “I would’ve done better at Sydney in 2000 if I hadn’t dallied so long,” he laments. “But once my mind was made up, I never looked back.” 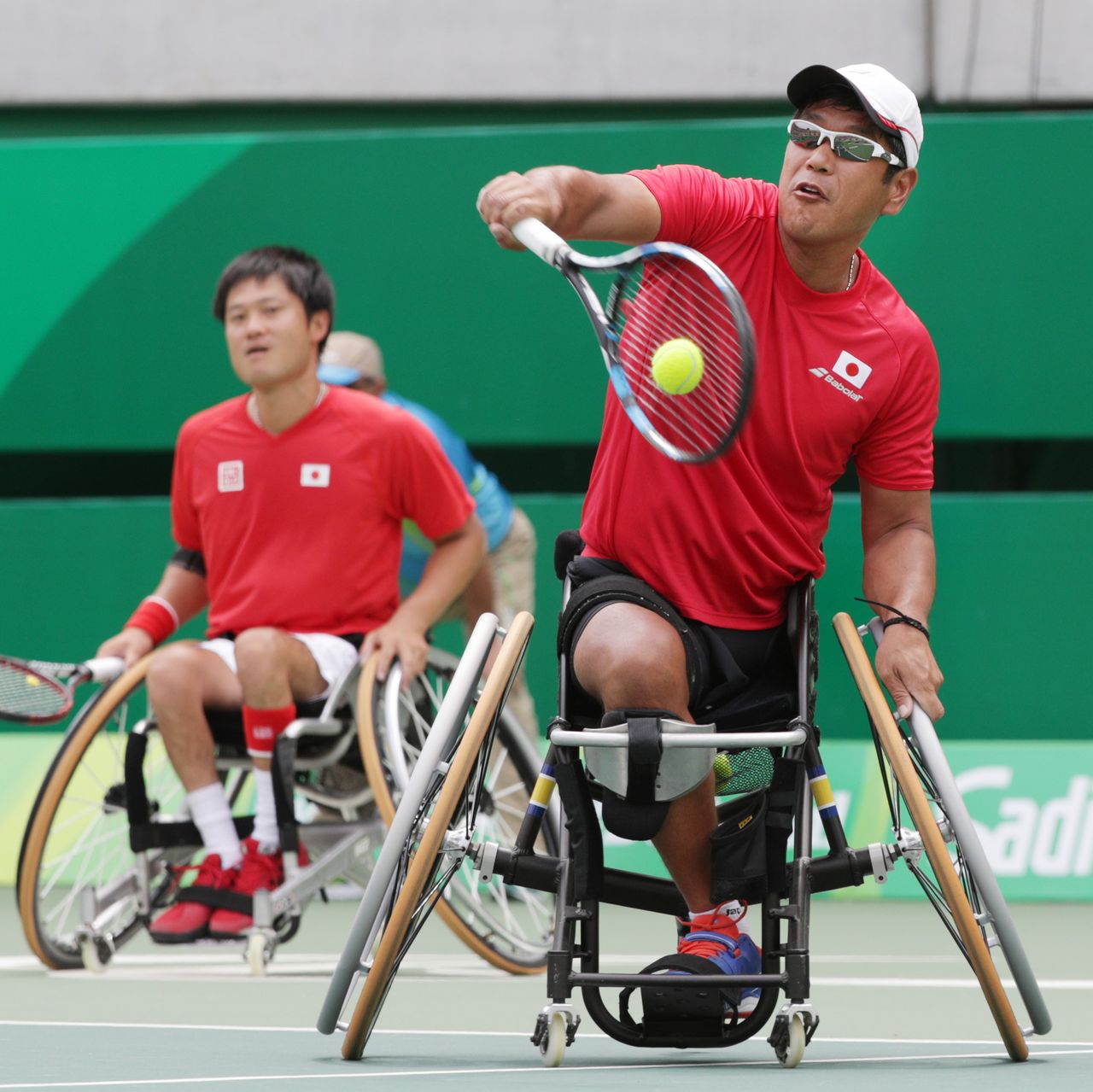 A Bumpy Ride to Gold

Once he settled into life in Chiba, Saida started training with his sights set on the Athens Paralympics, five years away. He competed in events in Japan and overseas, but he says the international tournaments were the toughest. Along with having to wheel through a foreign city while weighed down with luggage bursting with rackets, clothing, food, and even a rice cooker, he also had to book his own airline tickets and hotel rooms, a daunting task with his then limited English skills.

More disheartening, though, was his inability to win overseas. Even with countless hours of hard work under the watchful eye of his coach, outside of Japan he frequently found himself heading home after playing just a single match. As the losses stacked up, they took a toll on his confidence. “I wondered if I’d done the right thing by moving to Chiba,” he recounts. “Each time I hit a low point, I would have to dig deeper and deeper to pump myself up again.” 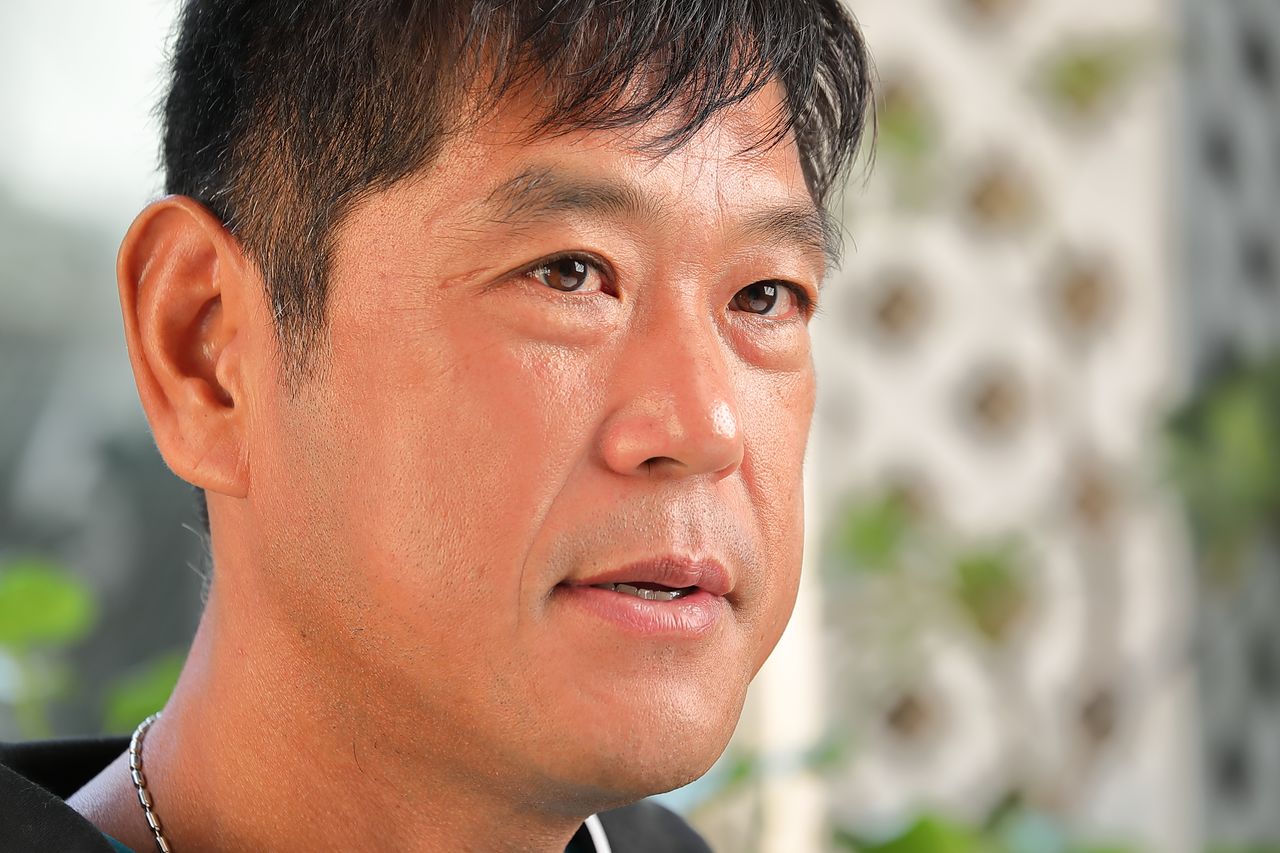 Even with these early tribulations, Saida steadily improved his game. Opponents came to fear his blistering serve and powerful backhand—skills he would use to devastating effect in his gold-medal triumph in Athens.

Saida stresses that uncertainty goes hand in hand with being a professional athlete. “All it takes,” he warns, “is an injury or a sponsor pulling out to bring it all crashing down on your head.” Even with his success, he does not consider himself a role model and insists that his work ethic is no different than Japan’s hordes of company warriors. “I take each victory in stride.” While he admits to celebrating his medals in Athens, Beijing, and Rio, he asserts that “by the next day, I was fully focused on the next competition.”

Although Saida may not admit it, his accomplishments and approach to his sport have inspired countless other para athletes to pursue their dreams.

Saida took up wheelchair tennis at 14. In elementary school, he had loved playing baseball, but bone cancer claimed his left leg when he was 12, leaving him no choice but to hang up his glove. The loss of his limb deeply impacted Saida, and his parents, concerned over their son’s wellbeing, enrolled him in a wheelchair basketball program in the hopes that involvement in sports would raise his spirits.

It did the trick. Saida took to the speed and physicality of the sport and quickly regained his youthful spark. He says he would have stayed with basketball, but in an unexpected twist, most of his teammates switched to wheelchair tennis after taking part in a practice course. Although not his sport of choice, Saida swapped the hardwood for the hardcourt to be with his friends. Gripping the racket, though, he says he got a thrill out of smashing the ball, proclaiming that “the rallies are what hooked me.” He stayed with tennis, and by university he had earned a spot on the Japanese national squad.

Over the succeeding two decades, Saida has risen to be a leader not only in wheelchair tennis, but of all para sports in Japan. He inspires athletes in all fields with his accomplishments, and has also lent his sense and knowledge to creating better performing sports wheelchairs.

As Tokyo 2020 approaches, Saida says he is determined to achieve his seventh Paralympic appearance. “It would be the perfect way to repay everyone who has supported me over the years.”

Saida has his work cut out for him. He is currently ranked fifth nationally and only the male and female players in the top four will qualify for the Japan squad. The tennis legend remains confident he will make the cut, though, asserting that “I always finish what I start.” Judging by his past achievements, there is every reason to believe Saida will be on the court for Japan when the Paralympics kick off in Tokyo in August 2020.