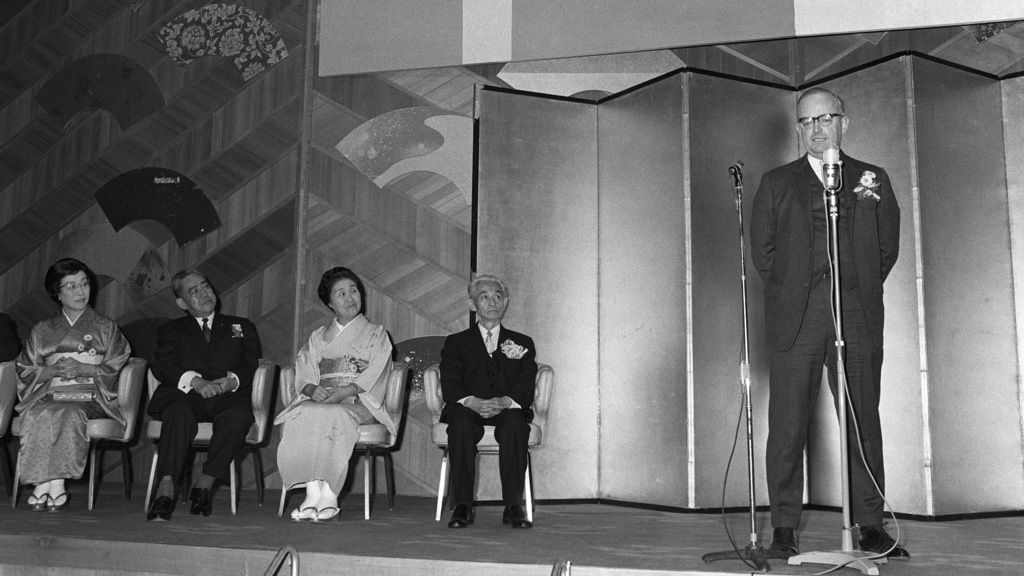 Culture Feb 11, 2021
Edward Seidensticker (1921–2007) was one of the leading Japanese-English translators of the twentieth century, best known for translations of The Tale of Genji and works by Kawabata Yasunari, Japan’s first winner of the Nobel Prize in Literature. In his centennial year, Professor Janine Beichman recalls a man who loved writing, and their friendship together.

One day Herbert Passin, whose course in the sociology of Japan I was taking at Columbia University, told me his old friend Edward Seidensticker was visiting New York and asked if I would like to meet him. Of course I leaped at the chance, since Seidensticker—although yet to start on The Tale of Genji—was already preeminent as the translator of Tanizaki Jun’ichirō (The Makioka Sisters) and Kawabata Yasunari (Snow Country).

It must have been over coffee that day that I told him we were reading Kawabata Yasunari’s Yukiguni in my fourth-year Japanese class, and of course referring to his translation (Snow Country) along the way. “Did you find any mistakes?” he asked immediately, with some anxiety. How surprised I was! I had to go over it in my mind several times before I realized that he was completely sincere. So I knew this man was humble. I guess that was the first thing I learned about him.

By the time I came to live in Tokyo, Ed (as he preferred to be called) was dividing his time between Hawaii and Japan. I lived pretty near him in Tokyo, so we used to meet for lunch and sometimes, with my husband, for dinner. I remember early springtime most, when we would meet for lunch at Ueno, and then walk around Shinobazu Pond to watch the birds or wander over to Yushima to see the plum blossoms. 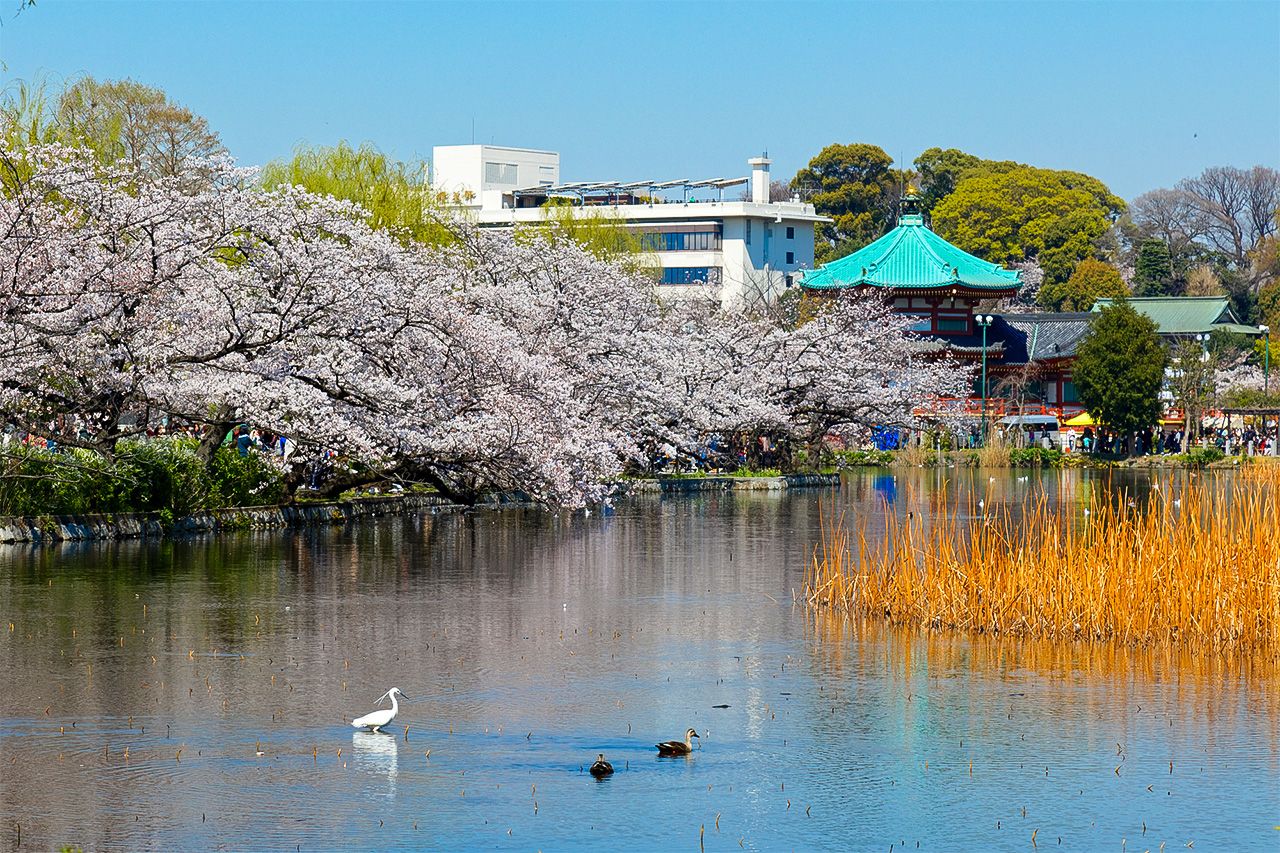 In his quiet moods, he sometimes came out with casual comments that made a deep impression on me. Once we stopped to watch a heron standing on one leg in the pond. He mentioned that it would stand there for hours at a time.

Then he slowly added, with a little smile, “You wonder what he has in mind.”

I have the exact quote because when I went home I wrote it down at once and dated it: March 31, 1977.

In truth I did not wonder what the bird had in mind until the question was raised, but if I met Ed now I would not be able to resist asking why he assumed the bird was a “he” and not a “she.” The question would probably evoke some prickly comments about feminism. Or it might not; it might head in a completely other direction.

That was the fun thing about Edward Seidensticker—you never knew where the conversation would wind up. Talking with him was great fun. That is what I remember best.

At the same time, if I wanted to talk about a feeling or emotion, and we often did, he always seemed to understand. His heart was in the right place about almost everything and he knew the real from the fake.

Knowing the real from the fake: that reminds me of the theme of lying versus truth that undergirds the last 10 chapters of The Tale of Genji, a more subdued narrative set largely outside the court in the wilds of Uji after the death of the protagonist Prince Genji. It must be the great sympathy Edward Seidensticker felt for Ukifune, the silent truthteller at the center of this drama, that made him describe her entrance into the holy life so beautifully in one of his wonderful essays about the novel:

“She has left behind the corner on the outskirts of the court that has been hers, and . . . arrived at her nunnery, there to make solitary preparation for the unknown. The women of the Genji have come a great distance since Murasaki was espied among the cherry blossoms by the shining Genji.”

A Letter to Ed

Now Edward Seidensticker himself has entered the unknown. Perhaps he has run into Ukifune or other characters from the Tale there. If I could send him a letter there, here is what I would write:

Do you know the place you occupy in my heart? You were there at many moments of the first years of my life in Tokyo, and we strolled the streets of Hongō and Yushima together.

I’ve found that people who admire your great accomplishments, your wonderful translations of Higuchi Ichiyō, Nagai Kafū, Tanizaki Jun’ichirō, Kawabata Yasunari, Mishima Yukio, your books about Tokyo, the biography of Kafū—they want to know what you were “really” like.

Is it so hard to tell from your books? Not so hard for me, at least not if the book is Genji Days, the journal you kept to chronicle the last years of the many you spent translating The Tale of Genji.

You must have loved to write, that is, the sheer act of recording things, because although I think you spent every morning from early on translating, you found the time to record the events of the whole day in the journal.

A typical entry begins with the thoughts you had as you spent the morning with Murasaki Shikibu—“I worked hard on the typing of a final version of “Kashiwagi”—and goes on to describe your thoughts thrumming in the background as you typed out your draft. You were turning over the insoluble question of whether Murasaki actually wrote the last chapters of the novel (the Uji chapters) or someone else did, a perennial debate in Genji studies. After going over the available evidence you concluded, “And so, in sum, one does not know. And never will . . .”

The entry goes on to describe the rest of your day:

“Fukuda and I went driving and swimming in the afternoon. We drove through Waikiki and out to and beyond Makapuu Point, stopping from time to time to look at the near and far sea, both of them extraordinarily lovely, Maui and Molokai and Lanai dim but very visible, way out there. Blue Hawaii—it is a silly, trite expression, but a part of the spell is in the blue islands in the offing. Not very much about Hawaii is as it was two centuries ago, but that is.

We went swimming at Kailua, where I spent so many happy afternoons during the war, taking that breakneck bus over the Pali road, now deceased and discarded. The feel was as of then, thirty years ago. I have taken to swimming with my glasses on, like Harry Truman. How fine it is to lie motionless in tropical waters and look up at a trade wind making itself evident in a coconut palm.” (Genji Days, Kodansha International, 1977, p. 186)

I wonder if I ever told you how I laughed out loud when I first read that. I always think of you that way, recumbent (like the Reclining Buddha?) in the Hawaiian ocean, floating on your back with your glasses on like Harry Truman. Now I also notice that wonderful phrase, “a trade wind making itself evident in a coconut palm.”

“Making itself evident.” You granted spirit and consciousness to the trade wind in Hawaii as surely as you did to that egret at Ueno.

The palms in Hawaii and the plums at Yushima, as well as the birds of Shinobazu Pond, all were your friends. And so was I.

literature translation The Tale of Genji