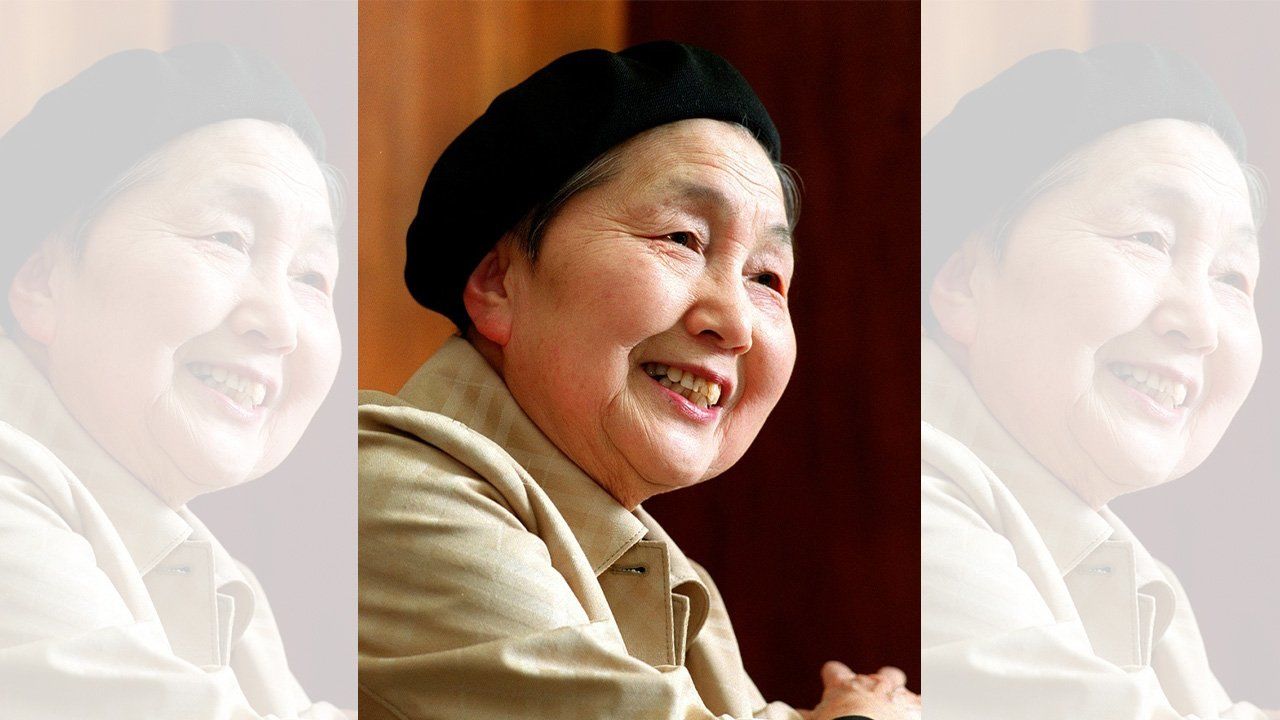 Culture Dec 10, 2021
The poet Ishigaki Rin (1920–2004) lived through tumultuous years in Japan, but brought a worldview steeped in the quiet everyday of her life to the work she left behind. A look at her poetic career with translations of some of her key verse and writings.

The modern renaissance of poetry by women in Japan begins with Yosano Akiko (1878–1942) in the opening years of the twentieth century. This was the first wave. The second wave took off in the early postwar years, when there was an extraordinary revival of literature and a proliferation of literary magazines in spite of paper shortages, rapid inflation, and restrictions imposed by the Occupation authorities. Ishigaki Rin (1920–2004) had been writing and publishing fiction and poetry since childhood, but after the war she acquired a new audience, one for whom literature mattered in a very personal and vital way. A dramatic example is the backstory of “Aisatsu” (Greetings), written in August 1952, to mark the anniversary of the atomic bombing of Hiroshima. Her remarks prefacing the poem, and the poem itself, are translated below:

After the war, the labor union movement became a force to be reckoned with and cultural activities were strongly promoted by it. Food and entertainment were in short supply then, and even on the creative side—that is, for literature—we had to be self-sufficient. Just as we grew our own potatoes and squash, we had to write the poems published in our office newspaper ourselves. One day, in fact, I was called into the office of the employees union at my workplace and told: “Tomorrow is August 6, the day Hiroshima was bombed. In the morning, when everyone reports to work and stands in line to stamp the attendance ledger, there’s going to be a wall newspaper directly over the table, and it will have a photograph of the atomic bomb disaster. We want you to write a poem to go with that photograph right now.” I was given one hour to do it, on company time.

On a photograph of the atomic bombing

Ah,
this face so horribly burned
one of the hideous burns of the 250,000
people who were in Hiroshima
on the sixth of August 1945

I search those faces for tomorrow’s expressions
and I shudder

the earth holds hundreds of atomic bombs
and you are walking the hair’s-breadth border between life and death
how can you be so tranquil
and so beautiful?

I called it “Greetings” because it was a way of saying good morning to my friends.

I think it was the year that the Americans first allowed photographs of the atomic bomb victims to be shown publicly, and it was the first time we had seen one. Both the union official who ordered me to write the poem and I myself were profoundly shaken. My response arose like the scream of one who cries out while being beaten. I have no idea what I did or how I proceeded; all I can say is that the words burst forth without my interference like the noise of a xylophone and a drum crashing together and so my scream became a poem . . .

The next morning the poem was posted for all my colleagues to see. It had been written in large letters, with a brush, on a sheet of white paper over three feet tall and as wide as the entire wall. I entered the office with everyone else and was astounded when my own poem “greeted” me from on high. I was amazed that a poem published in this form would be read by the people around me.

“Greetings” marks the beginning of Ishigaki’s postwar literary activity. Beginning with her 1959 Watakushi no mae ni aru nabe to okama to moeru hi to (Before Me the Rice Pot the Soup Pot and the Burning Flame), published when she was almost 40, she published four collections of poetry, three of personal essays, and two edited volumes of modern poetry with personal commentaries. The output was not large, and she never became an especially active member of the literary world. Yet the impact she had is out of proportion to such external markers. Today she remains one of the best known and most popular of contemporary Japanese poets.

There is an exciting breadth to Ishigaki’s work, ranging from social and political poems like “Greetings” to wistful love poems and meditations on death, aging, and the passage of time. What links them all is the value placed on the individual’s desire for freedom and self-expression and on the right of each person to live as fully as possible without being bound by family or social obligations, as well as a painful sense of the factors that makes achieving these things so difficult. The themes are never hammered away at crudely. Ishigaki expresses them slantwise, in down-to-earth colloquial language, through unexpected and sometimes surrealist images, vibrant wit, and a refusal to be pinned down to literal meaning.

Perhaps the best-known of all Ishigaki’s poems is “Hyōsatsu” (Nameplates), written, she explained in her essay “Tachiba no aru shi,” when “I had pushed union activities a little to one side . . . it was as if I had shifted from being one among many to one within myself.”

When you live in a place nothing comes close
to putting the nameplate up by yourself.

When you rest in a space
the nameplate another attaches
never works out.

In the hospital they added Miss
to the card on the sickroom door
Miss Ishigaki Rin.

If I stay at an inn
there’ll be no name on the door
but by and by I’ll be in a cremation oven and
they’ll slam the door tight and hang a tag
that says Ishigaki Rin, the Honorable—
how will I protest then?

Miss
the Honorable
a hex on them both,

when you live in a place nothing comes close
to attaching the nameplate with your own hand.

And as for the home of your soul
never let the nameplate be attached by anyone else but you
Ishigaki Rin
that will do.

In 1975, after 40 years as an employee of the Industrial Bank of Japan, Ishigaki retired. A little before that, she had left the small and shabby rented house she shared for years with her parents and two brothers to live alone in a one-room apartment she bought through her employer. You might say she had taken her own advice in “Iede no susume” (The Runaway’s Song), where she wrote, “Come on everyone, let’s leave home and family, let’s go outside and lark around, desert that teeny-tiny house with its self-important lock for the free and open fields!”

What did she find when she left home? The record is in the three volumes of personal essays: the 1973 Yūmoa no sakoku, the 1980 Honō ni te o kazashite (Warming My Hands at the Flames), and the 1989 Yoru no taiko (Night Drums)¸ most of them written after she began to live on her own. There, in addition to a trove of autobiographical material, we are treated to richly detailed descriptions of the people, animals, and postwar social changes she encountered as a late-life flâneuse in Tokyo and occasional visitor to other parts of Japan. As she wanders here and there, taking notes on everything, the days of war are never far from the surface of her consciousness. As is the experience of many survivors, a present happiness can unexpectedly become a door to the past, a scrim curtain lit up by memory revealing pain and trauma. Witness the brief “In Minato Ward,” written when she was about sixty-five years old and presented here in its entirety:

“Shall we sit here?” says the young female editor, leading me to into a compact coffee nook tucked almost next to the checkout counter of a supermarket, one of the more stylish shops in a greenery-heavy neighborhood of Tokyo. You get the feeling the space was set aside for the convenience of shoppers who might want to take a breather before heading home.

As soon as we sit down at the small round table, I hand over my pages, and the editor begins to read. While I wait for her to finish, the coffee comes, and as I sip, a small boy whose head hardly reaches the table toddles over and says something to me. Impossible to make out.

I bend down to hear. “Guess what, the toy, broke!” He’s clutching what seems to be a plastic toy car. I have no idea how it broke, but out of fellow feeling I say, “Oh dear, how awful!” That’s enough to produce a satisfied grin, and he trots back to where he came from. When he gets near the cash register, he turns around and waves to me with another big grin. A slim young woman standing next to him also looks over at me and bows with a smile. I assume she is the little boy’s mother, keeping an eye on him as he wanders about during her shopping.

He must have been about four years old, this child who suddenly appeared by my side. He could have been the wingless twin of one of those adorable cherubs in old European paintings. I was so moved by the trust with which he came up and talked to me that I simply sat there in a daze for several minutes. Maybe I’ll be able to meet him again sometime. I really hoped for that. How was it that in the midst of the everyday such blessings had been bestowed on me? Across the room, his mother was bowing to me.

By the way, this happened in Minato Ward, where I was born and lived for the first twenty-five years of my life. The toy in the palm of the little boy’s hand led me to a memory impressed in my own hand. Near the war’s end, when the Yamanote section of Tokyo was bombed, my house and the entire area where I lived were destroyed and many people died. The day before, a friend who lived in a nearby prefecture spent the night and when she left the next day she gave me an egg as a present. An egg was so precious in those days that I put it in my desk drawer, and so it burned up together with our house. If I had eagerly eaten it as soon as she gave it to me, it would probably have vanished from my memory, but the lost egg left a light impression, a faint memory in my hand.

The supermarket in this neighborhood of high-rise apartment buildings has everything you could want, and in one circuit around it you can buy everything a household kitchen might need. Any market these days has mountains of egg cartons piled high, each carton holding ten perfect eggs. To me, this sight seems like something in a dream.

It’s like this: I’m definitely getting on in years, and I live alone, and meeting a child as adorable as an angel fills me with the sort of pure love you know only in dreams. Why, then, can’t I think of my memories of that war that ended forty years ago as but another dream?”

One essay cannot do justice to the threads and complexities of Ishigaki’s emotions, but “In Minato Ward” poignantly shows one important strand. For the poet and essayist Ishigaki Rin, as for so many others, the present can never obliterate the past—trying to reconcile them is the never-ending work of a lifetime. At the same time, you feel, between the lines, Ishigaki’s awareness of her own future death, an awareness that surely made her response to the little boy she never expected to see again even more overwhelming.

Moving effortlessly toward her future, Ishigaki Rin, poet of today’s Japan and yesterday’s too, held the past forever in mind as she swam with curiosity and delight in the present.