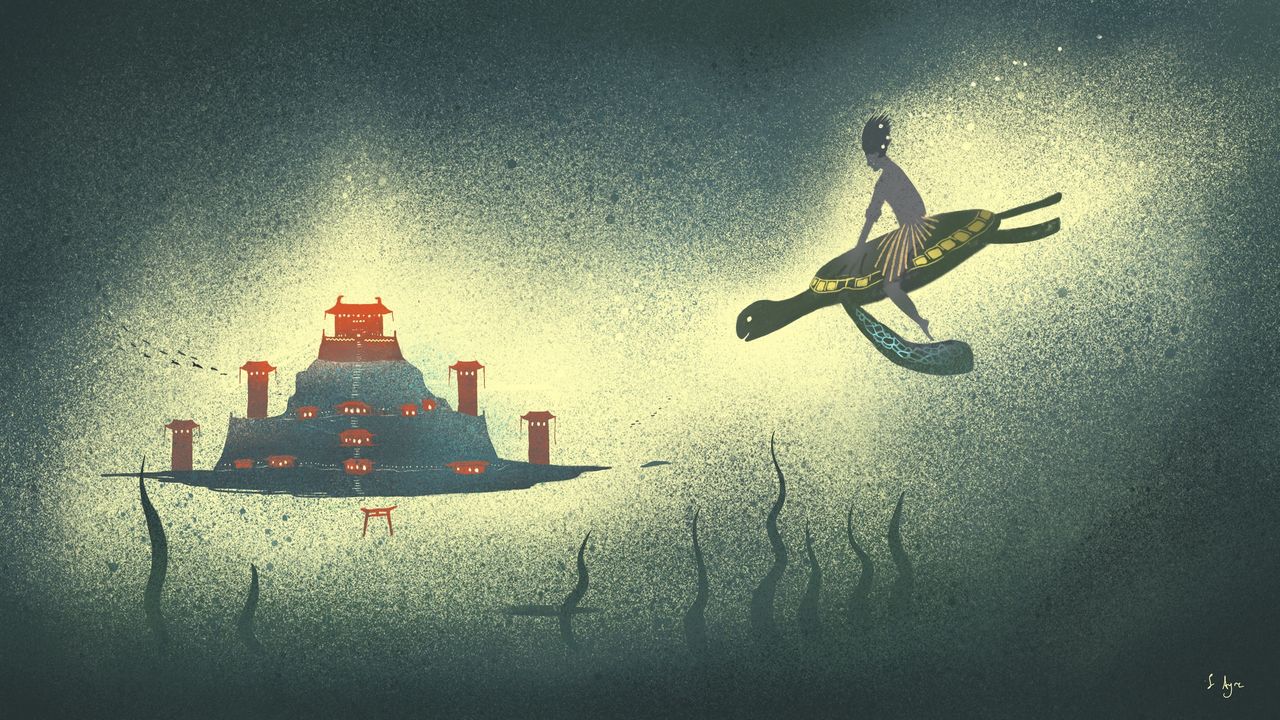 Culture Jan 3, 2020
In this classic Japanese fairy tale, a young fisherman called Urashima Tarō travels to the Dragon Palace under the sea, returning with a priceless gift—or a curse?

A long time ago, a fisherman named Urashima Tarō lived with his parents in a small village. He was known for his skill in catching all kinds of fish, and also for his kind heart. One evening, he was walking home along the shore when he saw a group of boys gathered around a large sea turtle, shouting and laughing. Two of them dragged it across the ground, while another pounded on its shell with a stick.

“Stop that!” he cried out. “How dare you torment an innocent creature?” The boys scattered at his approach. The turtle slid into the waves and swam away.

The next day, when Tarō went fishing as usual, he rowed farther out than the other boats, until he could no longer see them. The sea was calm, and he felt strangely calm too, caught in a reverie watching the clouds scud by overhead. Then a voice came to him across the waters.

“Urashima Tarō! Urashima Tarō!” The turtle of the day before was paddling toward him. “You saved my life. Let me show my gratitude by taking you to the Dragon Palace under the sea.”

Startled, Tarō responded, “But how will I get there? I can’t swim that deep.”

“Just get up on my back and I’ll carry you,” the turtle said. “We’ll be there in no time.” So Tarō climbed onto the turtle’s shell, and it dived down beneath the waves.

The Palace Under the Sea

After the turtle had swum for some time, a gate appeared in the distance, and beyond it a magnificent palace of red and white coral. Soon, they glided to a halt outside the front of the palace, where Tarō was greeted by a young woman dressed in elegant crimson and green robes. “I’m Princess Otohime. I’m so glad to meet you,” she said. The attendant ladies around her beamed at the young man as fish darted back and forth between them.

Inside the main banquet hall, tables were spread with every kind of marine delicacy and exquisite sake. Soon, dancers in flowing garments swayed to the music of zithers and flutes. “Unbelievable,” Tarō whispered to Otohime in the seat beside him. “I never imagined such splendors existed.” In such pleasures, the days and weeks sped by.

One morning, Tarō woke up and suddenly remembered his father and mother, their simple hut, and their sparse meals together. “I must go to see my parents,” he told Otohime.

“But you only just arrived,” she said. “Why rush away so soon?”

Tarō would not change his mind, no matter how much Otohime tried to persuade him to stay. At last, she said, “Very well. But take this as a souvenir of the Dragon Palace. Think of me when you look at it, but don’t ever open it.” She handed him a richly lacquered box.

A Stranger in the Village

Once again, Tarō climbed onto the turtle’s back, and it carried him to the shore where he had first encountered it. Perhaps it was because he had been away, but the landscape did not seem as familiar as it should have. When Tarō turned to ask the turtle if it had brought him to the right place, it had already quietly slipped away.

He hastened along to his parents’ hut, but it had vanished. There was no sign of either his father or mother. Even the few villagers he passed were strangers.

“Excuse me,” he said to a gray-bearded man sitting by the wayside. “Do you know where the home of Urashima Tarō is?”

“I’ve never heard of him, and I’ve lived here all my life. And who are you, anyway?”

Tarō hurried away, back to the beach where he stared out at the waves and the horizon beyond. What on earth had happened? He did not know it, but the days and months he had spent in the Dragon Kingdom were years and centuries in the world above. Three hundred years had passed!

All Tarō did know was that he was stranded in a strange place with few possessions. Among those possessions was the box Otohime had given him, which he now unwrapped. He studied its lustrous, black surface and thought of the bright eyes of the princess. She had told him not to open the box, but maybe it contained the solution to his problem.

Slowly, he lifted the lid. A curl of white smoke emerged, rising into the air. Within a few short moments the time he had stolen under the waves caught up to him, and he transformed into a white-bearded old man. 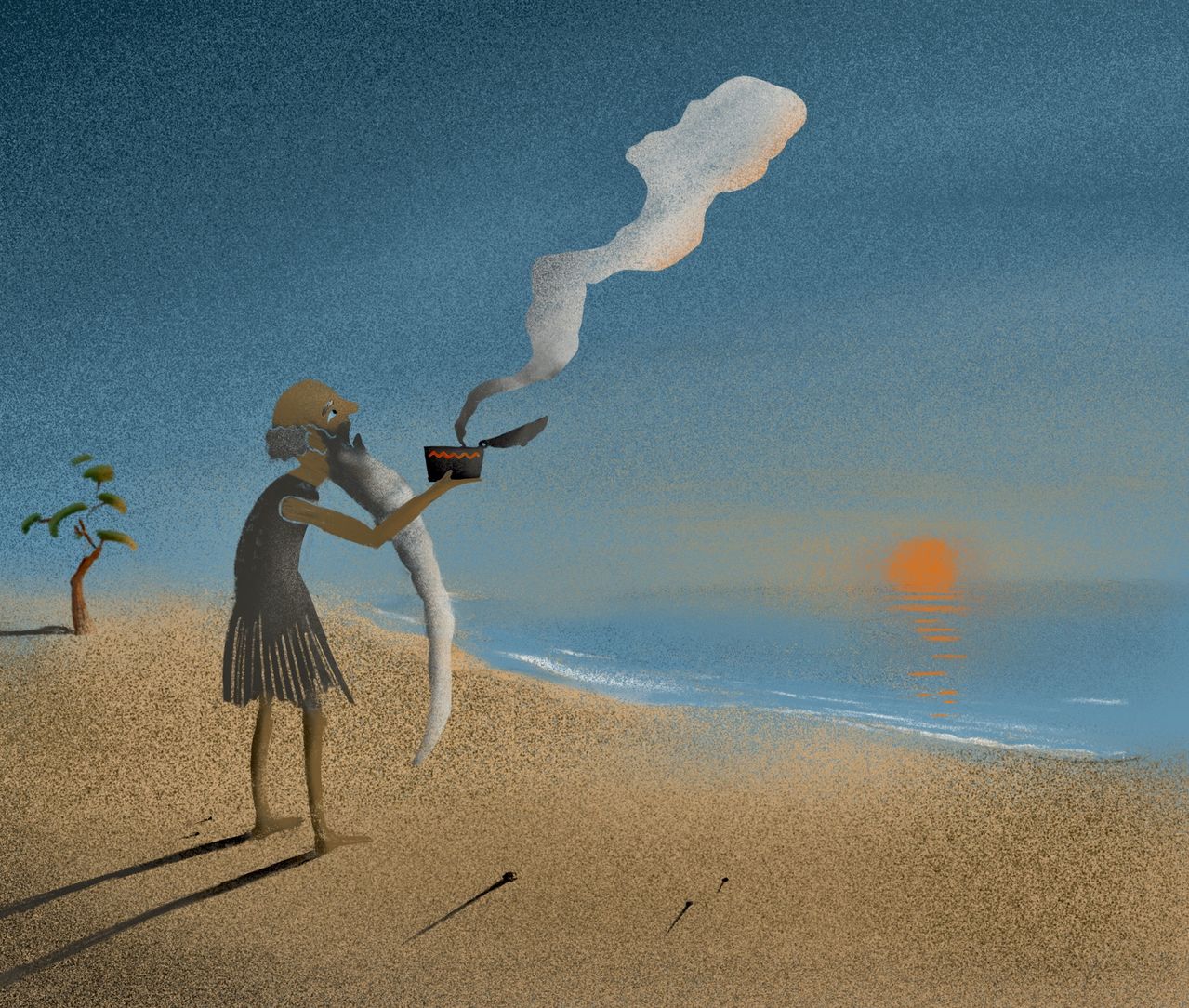