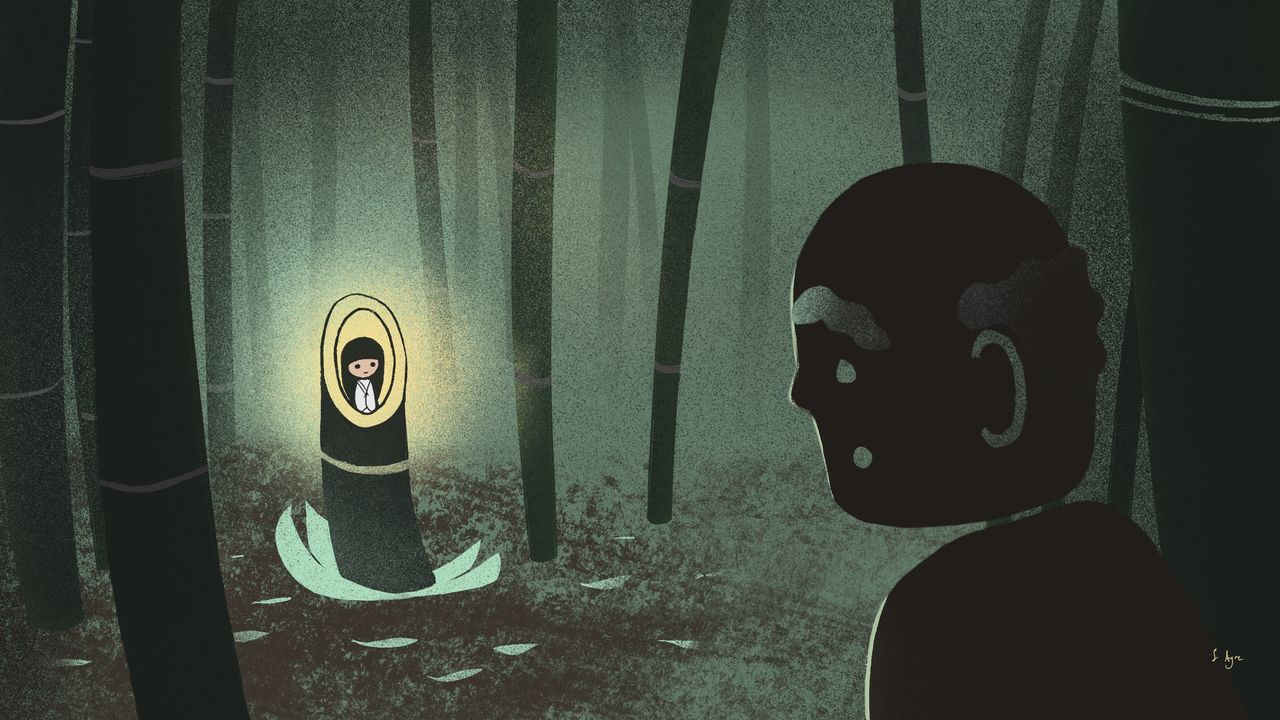 Culture Jun 9, 2020
An old man discovers a tiny girl inside a glowing bamboo stem. When she grows up, suitors flock to ask for her hand, and even the emperor falls in love with her. But she is not truly of this world, and must soon leave it behind.

A long time ago, there was an old bamboo cutter. One day, when he was out in the woods performing his daily labor, he noticed that one of the bamboo plants was glowing. Stepping forward to take a closer look, he discovered a tiny girl inside the hollow stem. It seemed to the childless old man that she was meant to be his daughter, so he took her home to raise her together with his wife.

In the days that followed, the bamboo cutter’s blessings multiplied as he repeatedly found gold inside the stalks he cut. He soon became extremely wealthy. The girl grew miraculously to become an adult woman in the space of three months, and she filled the old couple’s home with light. By this time, the old man’s riches had made him an important figure in the realm, and his daughter was given the name Princess Kaguya, meaning “the shining princess.”

As word of her beauty spread through the land, aristocrats and dignitaries dreamed of marrying her. Dozens of suitors flocked to the vicinity of her home seeking to somehow get word to the princess and convey their passion, but lacking the least encouragement, most eventually gave up. Only five of the highest rank remained as determined as ever to continue their courtship. They each implored the bamboo cutter to give them his daughter, but he said that she must decide.

Princess Kaguya set each of them to bring a different legendary item. The first two were tasked to bring the Buddha’s stone begging bowl and a jeweled branch from Mount Penglai, a distant peak on the island of the immortals. But the forgeries they offered were soon exposed. The third, charged with retrieving the fireproof skin of a fire-rat, was himself tricked by a merchant who sold him a fake, which Kaguya exposed by having it set alight. The fourth gave up his search for a dragon’s jewel when he encountered a storm at sea. And the fifth tumbled and injured his back while trying to snatch a shell charm from a swallow’s nest.

Following the disappointments of these suitors, the emperor himself desired Kaguya to serve at court, but she refused to meet the maid of honor that he dispatched. He sent for the old man and offered him court rank if he would present her for service. “If you make me go there, I will melt away,” she said. “I will die.” The bamboo cutter responded that he did not care for any rise in status if it meant losing her.

Even so, the emperor yearned to at least see her face. He arranged with the old man that he would come to the house while out on an imperial hunt. At his first sight of Kaguya, he was astounded by her radiance. “You must come away with me,” he insisted, calling for his palanquin. At that moment, though, she faded into a shadow, and he realized her extraordinary nature. When he gave up on his idea to take her to the palace, she returned to her original form.

The Palace of the Moon

For three years, the emperor and Kaguya exchanged letters. He had lost all interest in other women. Then, in the spring, she began gazing at the moon each night and weeping softly. The months passed until one brightly lit night, she burst into floods of tears and turned to her parents. “I must tell you at last that I came to this world from the palace of the moon, and I will soon return.”

Kaguya said that on the night of the next full moon, its people would come down to take her away. The emperor heard, and when the time came, he sent two thousand men armed with bows and arrows to defend her. But Kaguya said that it would be no use. “You cannot fight them with your weapons, and even if you lock me up in a room, that won’t stop them finding me.”

That night, a dazzling light suddenly appeared in the sky. Men dressed in stunning garments rode down through the clouds. As if under a spell, the emperor’s soldiers could barely resist, and the few arrows they shot upward bounced harmlessly off the supernatural beings. “Where is she?” called out their leader, the king of the moon. All at once, all the doors of the old man’s residence opened wide.

“I’m here,” Kaguya said, stepping outside. A palanquin landed beside her, and the king made her drink an elixir to recover her strength after her time on the earth. He was going to wrap a feathered robe around her shoulders, but she stopped him. “Let me write a letter first. I know that robe will change me.” She wrote a message to the emperor, bestowing the remainder of the elixir on him. Then she put on the feathered robe, forgetting all her cares and attachments to this world.

After the palanquin carrying Kaguya had risen into the sky and all the moon people had vanished, one of the emperor’s soldiers carried her last letter to him. She explained that her gift was an elixir of immortality, but the emperor had no desire to live forever without her. He ordered that both the letter and the jar be carried to the top of a mountain and burned. Since then that mountain has been known as Fuji, or “immortal.” 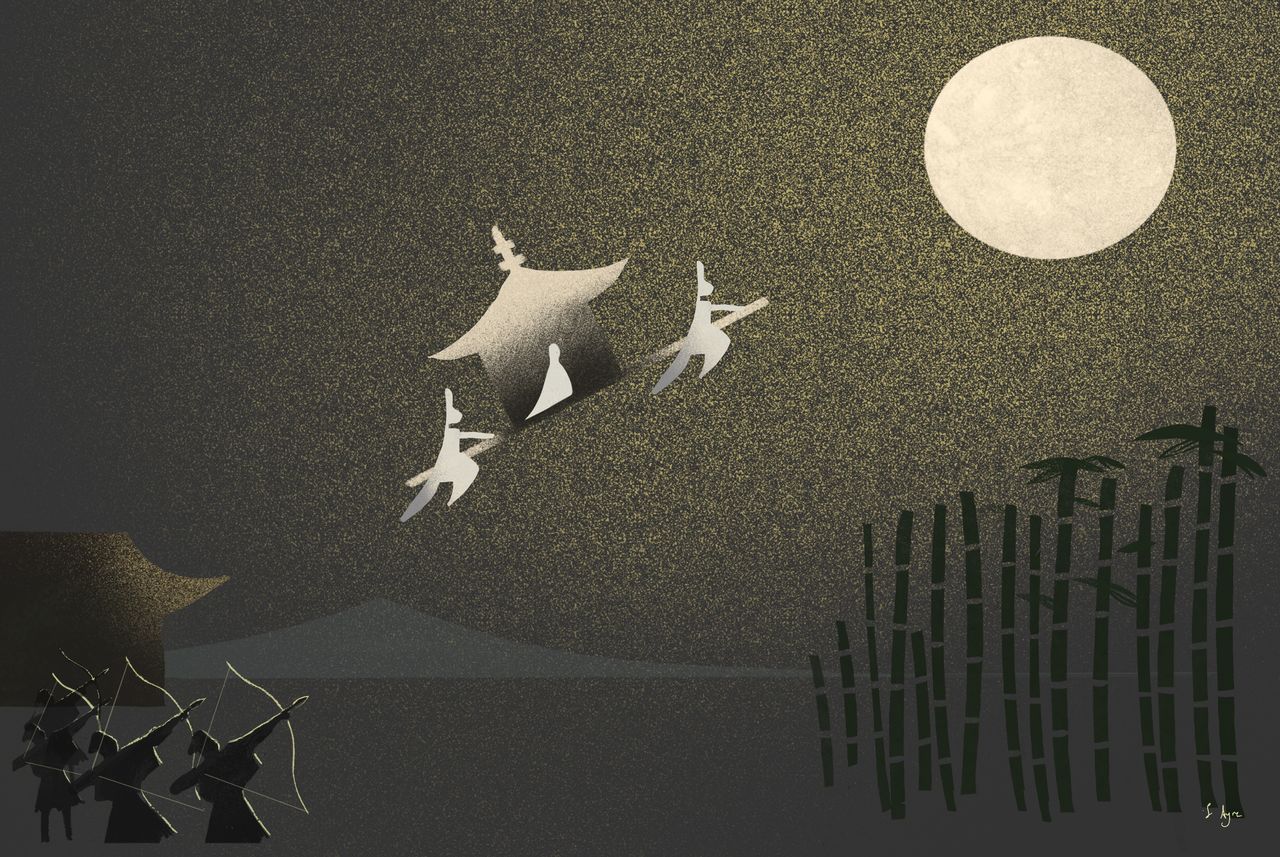