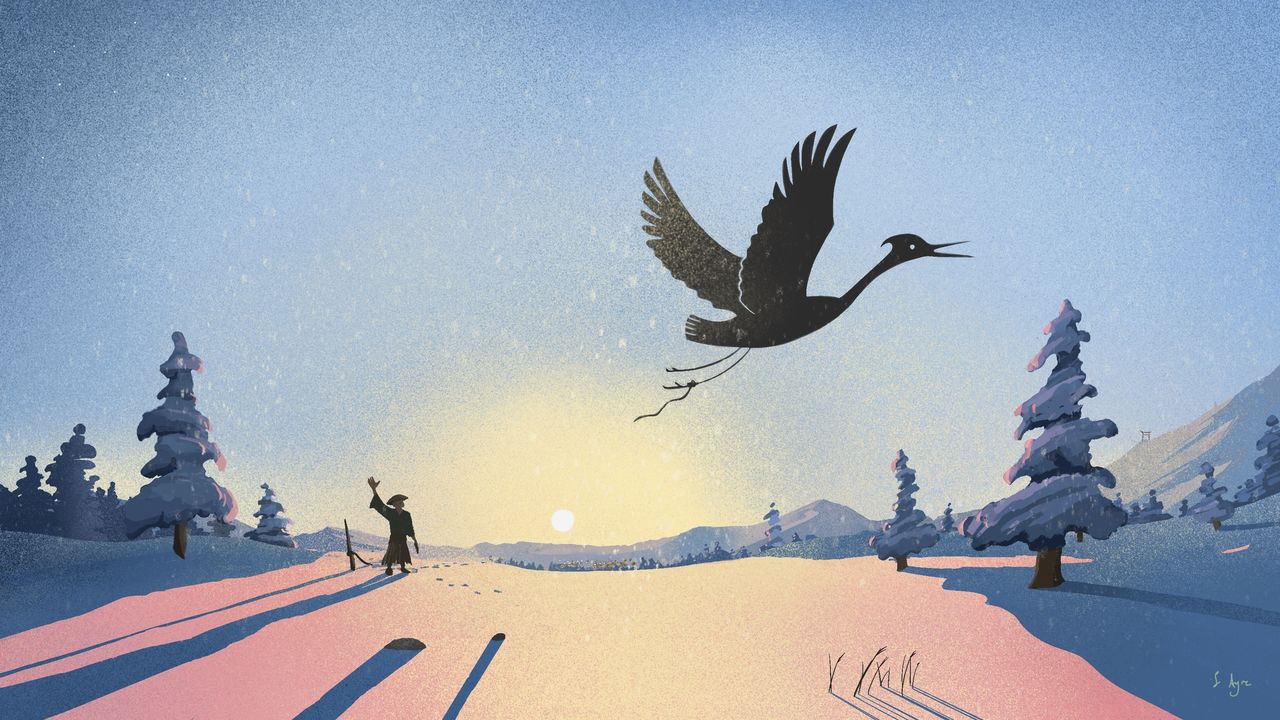 Culture Oct 8, 2021
One snowy night, a young woman appears at the door of an old couple. This classic Japanese fairy tale is a story of trust and secrets.

A long time ago, an old man and woman lived a poor life, scraping by as best they could. The man gathered firewood in the nearby hills, and the woman wove cloth at her loom. One day, on the way back from selling his firewood in the town, the man found a crane in a trap. The harder it struggled to escape, the tighter it was caught. “Hush there. Don’t move,” the man whispered. When he cut the bird free with a slash of his knife, it flew off toward the hills.

By the time he got home, it was dark and snow had been falling for some time. As he was telling his wife what had happened, there was a knock on the door, and the old woman opened it, wondering who might be there. “I’m sorry to disturb you so late, but I lost my way in the blizzard,” said the young woman standing in the snow. “Could I stay here tonight?” The old couple agreed at once.

The snow kept falling through the next day and the next. The young woman continued to stay with the old couple, cooking, washing, and massaging their backs before bedtime. They grew fond of her, and as time passed, they began to think of her like their own daughter.

One morning, the young woman said she’d like to weave some cloth. “But when I’m at the loom, don’t look into the room to see what I’m doing. You have to promise.” The old couple agreed.

The young woman worked all the way through the day and deep into the night. The clattering of the loom barely let up for three whole days, while the old woman busied herself with chores in the main room. Finally, on the third evening, the young woman emerged with a roll of cloth and said, “Take this to town and sell it tomorrow.” It was the most beautiful cloth the old couple had ever seen.

The next day, the old man went into town carrying the roll of cloth. When he struck a deal to sell it, he was astonished by how much money it fetched. The merchant pressed him to promise he would return if he ever had such fine material again. The old couple talked in wonder of how much more comfortably they could live, and hesitantly asked the young woman if she could make another roll.

Once again, the clattering of the loom filled the house. The old woman listened through the closed door each day, and when her husband came home late on the third evening, she said, “I wonder how she does it.” Just then, the young woman brought out the second roll of cloth.

“That’s it, this is the last one,” she told the couple. In the dim light, she seemed shrunken somehow. But after the old man sold the second roll of cloth, he and his wife asked if she could make just one more.

It took some persuasion, but finally the young woman agreed. The old man came home earlier from collecting firewood each day, he was so eager to see the next roll of cloth. The old couple whispered together on the third evening, wondering how it could be possible to produce such magnificent material on their ordinary loom. “We could just open the door the tiniest part,” the man said. “She won’t notice at all.”

When they softly pushed open the door, and peeped through the crack, however, they observed the most remarkable sight. A crane was plucking its own feathers with its beak and weaving them on the loom. They were transfixed for several moments, staring at the bird, until the man touched his wife’s shoulder, they shuffled backward, and he slid the door shut hurriedly.

It was not much later that the young woman came out, looking frailer than ever. Silently, she handed the third roll of cloth to the old man. Then she turned away. “You promised that you wouldn’t watch me working, but you broke your word. I’m the crane you saved from the trap, and I came here to show my gratitude. But I can’t live here with you any longer.”

She stepped outside the house and transformed back into her original form. Where she had been richly covered with feathers when the man first encountered her in the trap, though, there were now bare patches across her body. As the old couple looked on behind her, she launched herself into the air and, with one sonorous cry, flew like an arrow toward the horizon. 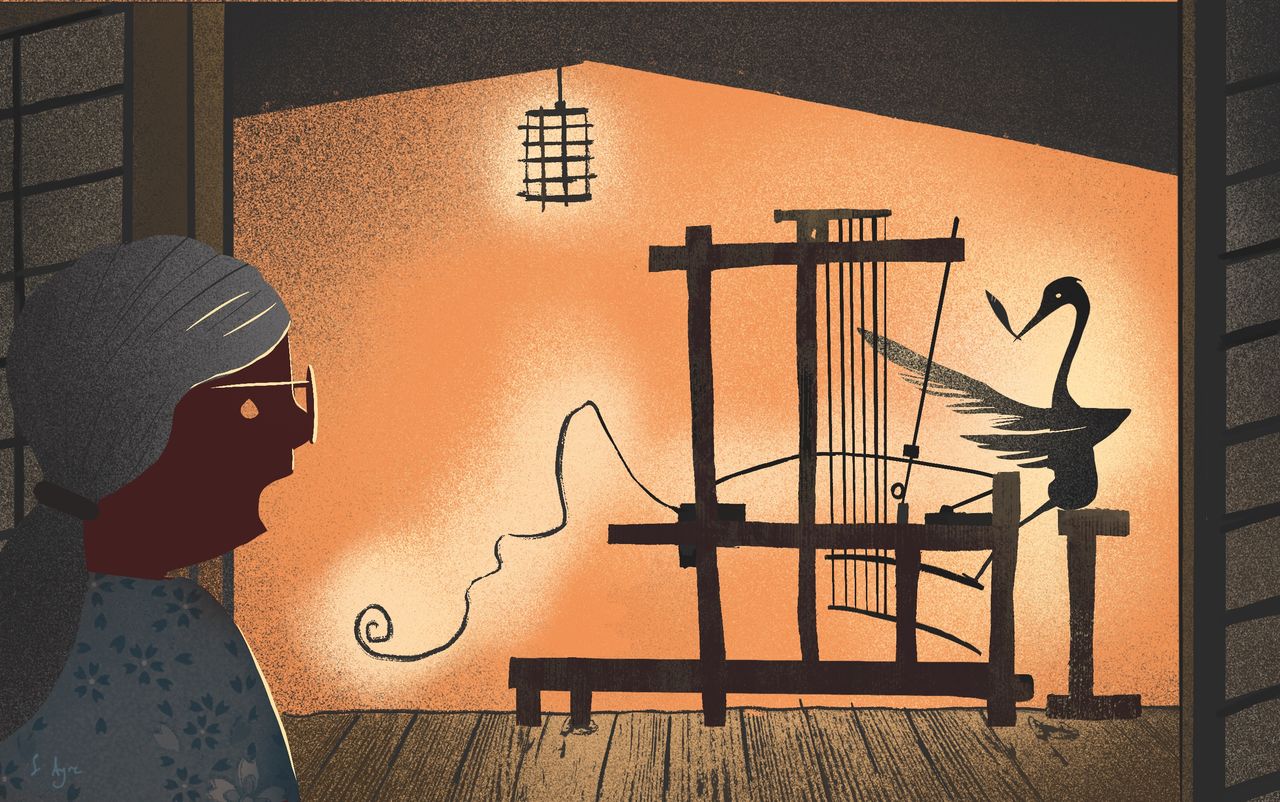