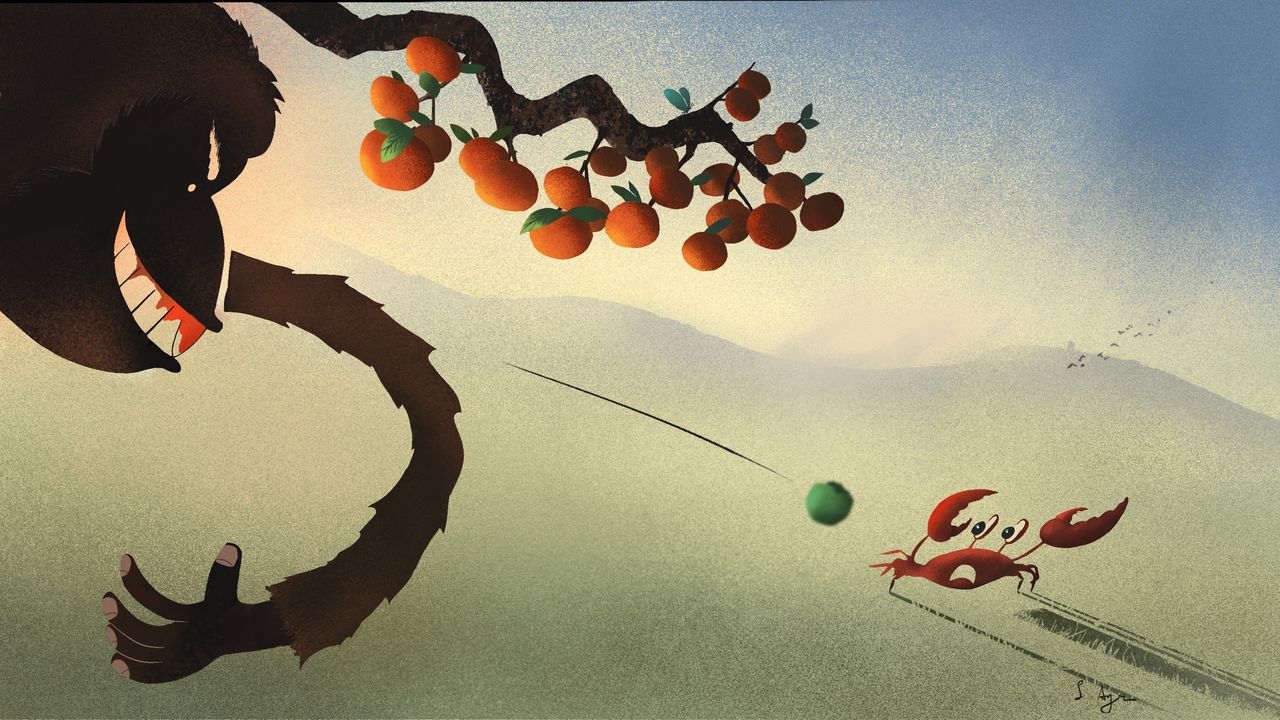 Sarukani Gassen: The Battle of the Monkey and Crabs

Culture Sep 20, 2022
This Japanese fairy tale is a story of deception and violent revenge.

A long time ago a crab and a monkey were constant companions. One fine day, they went out walking together. As the monkey scampered along a hillside path, it discovered a persimmon seed. Later the crab found a rice ball, as it scuttled beside the river. “Look at this!” the crab said, calling the other over. The monkey stared at the snack for some moments before pulling out the persimmon seed from among its fur.

“That’s nothing. Look what I have.” The monkey offered to swap the persimmon seed for the rice ball, but the crab objected that it was much smaller. “Ah,” said the monkey, “But you can grow the seed into a tree, and eat all the persimmons you like.” So, the crab agreed to the exchange, and the monkey grabbed the rice ball and gobbled it down.

The crab planted the persimmon seed in its garden and watered it each day. Soon, a tiny shoot broke through the earth, and the crab sang to the plant as it plied it with water. Time passed and the shoot became a tree. Leaves filled its firm branches, and flowers bloomed in the springtime. Now the crab sang of ripening fruit, and when autumn came, the branches grew heavy at last with persimmons.

The crab was too short to reach any of the persimmons with its claws, however, and its sideways efforts to climb the tree trunk were no more successful. All it could do was gaze at the fruit high overhead, sighing. Then one day, the monkey passed by, and the crab offered it some of the persimmons if it would go up and pick them. The monkey agreed at once, and scrambled up the tree.

It gorged itself with fruit, high at the treetop where the crab could not see it. “They really are delicious,” it observed. “So juicy and sweet.”

“Enjoy the persimmons,” the crab called out. Then, a moment later, “But bring me some too.” The monkey licked juice from its paws and looked around it. Selecting a greenish fruit, it hurled it down beside the crab. 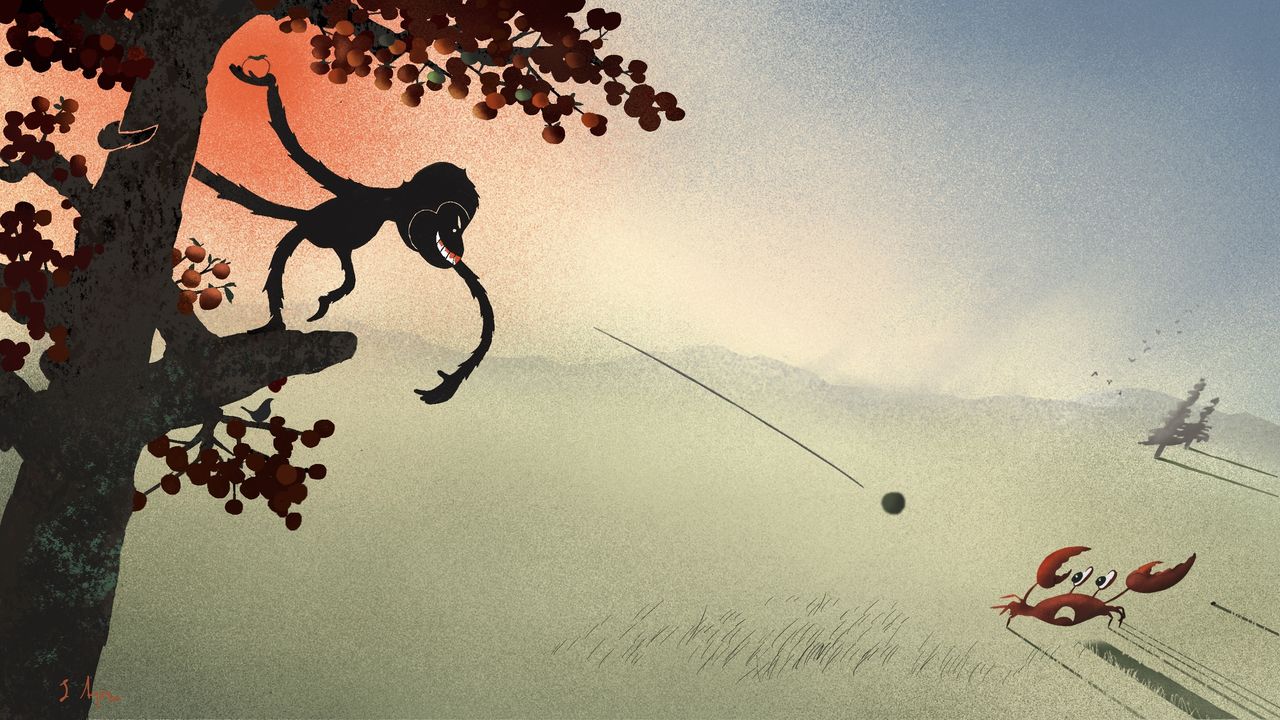 The crab scuttled over, but soon complained, “This is too bitter. Give me a ripe one.” The monkey chuckled to itself, and threw another fruit that was even greener. When the crab protested again, it hissed this time. Picking the hardest, greenest persimmon on the tree, it flung it directly at the crab, striking its shell with a loud crack, and killing it instantly.

The monkey departed with a stuffed belly, and arms full of fruit. It was observed leaving by the crab’s children, as they approached the tree. They wailed at the sight of their dead parent under the tree’s ravaged branches. An old chestnut came and asked what the matter was. “We vow revenge on the deceitful monkey,” the crab’s children told it. The chestnut agreed to help them, as did another group of characters just passing by at the time: a wasp, a cow pat, and a wooden mortar.

After swearing an oath together, the motley group set off for the monkey’s house. Finding that it was not at home, they prepared to ambush the treacherous creature. The chestnut burrowed into the ashes of the hearth, and the wasp concealed itself behind the water jug. The cow pat hid outside the door, and the weighty mortar climbed up to the roof.

Dusk fell. The monkey returned, exhausted from its day’s activities, and slumped down beside the hearth. “I’m thirsty,” it muttered to itself, and reached for the kettle. Just then, the chestnut leapt up from the ashes and burned the monkey’s nose. With a scream of pain, the monkey stretched a hand out for the water jug to cool its nose, but the wasp came buzzing out and stung it on the forehead.

The monkey fled from the house, but slipped on the dung that was now in its path, and crashed to the ground. The mortar launched itself from the roof and flattened the monkey beneath it. Then, the crab’s children gathered around the monkey and said, “Thus we avenge our parent’s killer.” They used their sharp claws to cut its head off. 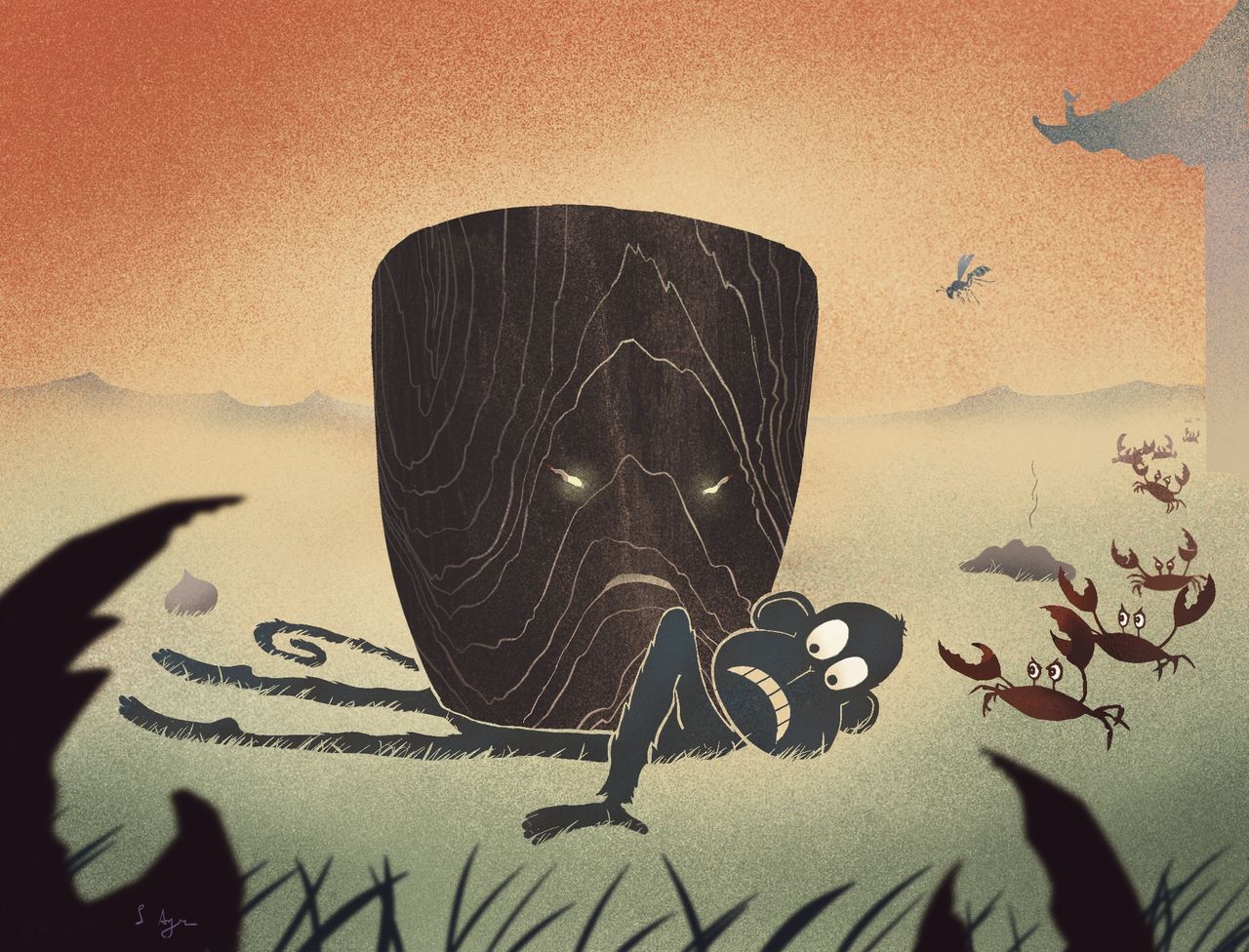 (This violent tale is commonly encountered in a toned-down version when told to Japanese children today. Nobody is killed, and the monkey sees the error of its ways. The cow pat is sometimes replaced by a similarly slippery piece of konbu kelp. Text by Richard Medhurst. Illustrations by Stuart Ayre.)