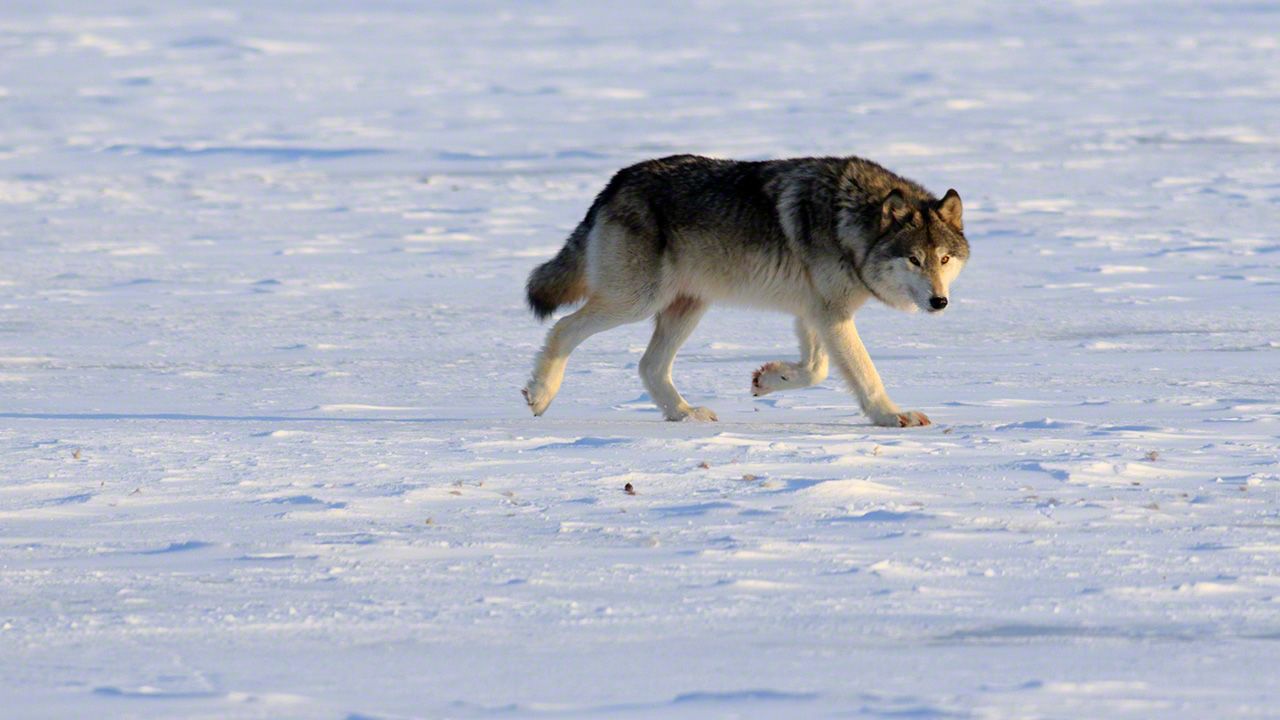 Images People Environment Travel Art Aug 11, 2021
Ōtake Hidehiro looks back on his life in this series of five articles. In the first installment, he discusses his first visit to the Northwoods, a vast region of forest and lakes spreading across north-central North America, and the dream wolf that led him there. 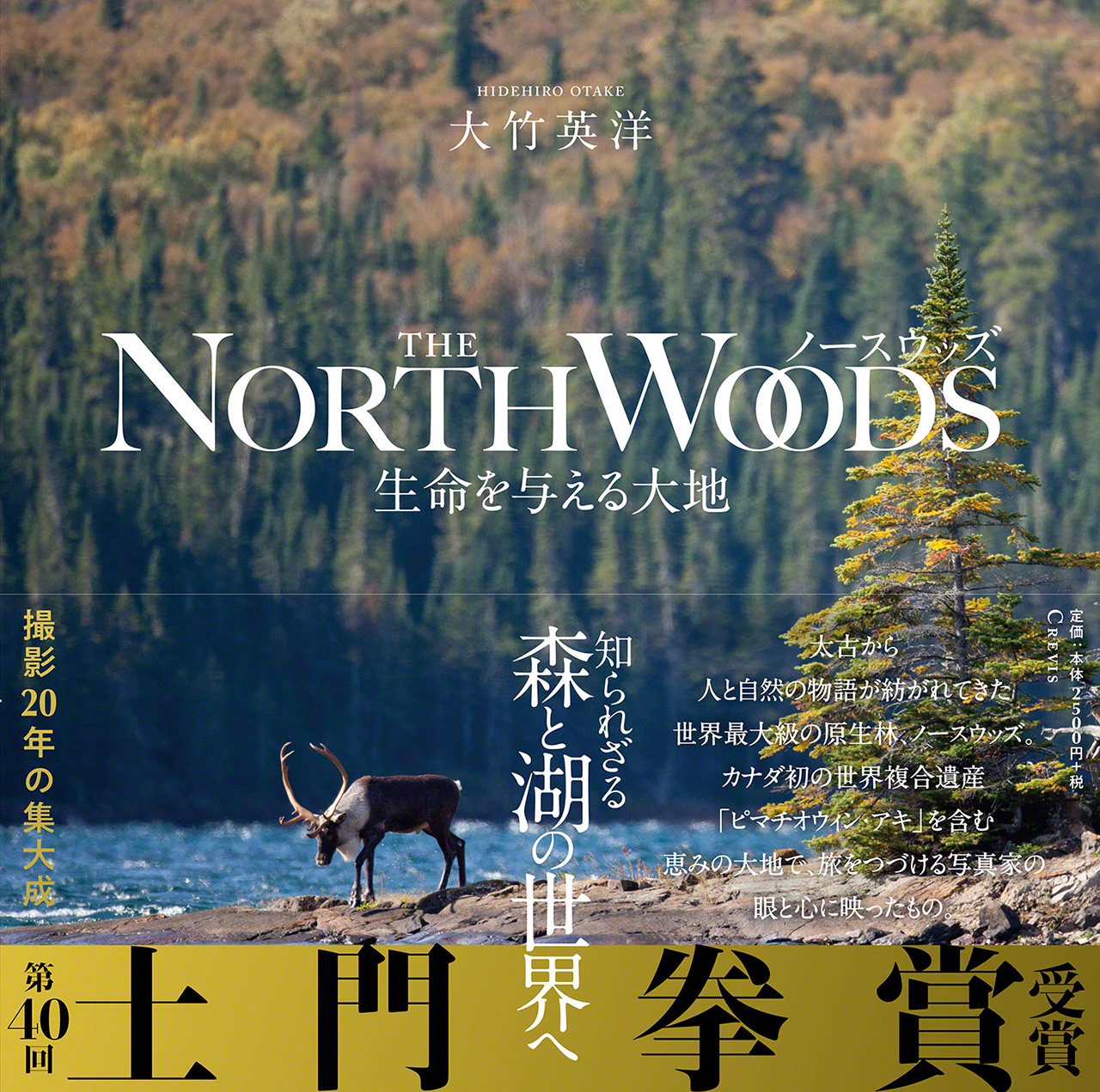 The Northwoods stretch across the northern region of central and eastern North America, and the nature photographer Ōtake Hidehiro has spent decades capturing their scenery and wildlife on film. He recently won the fortieth annual Domon Ken award for his book Nōsuuzzu: Seimei o ataeru daichi (The Northwoods: The Life-giving Land), which collects the best of his work from the last 20 years. The Ken Domon Museum of Photography in Sakata, Yamagata Prefecture, will exhibit his work from October 6, 2021.

It Began with a Dream

It was the autumn of my senior year at university. I had gone to sleep in my cramped Tokyo apartment, but suddenly I found myself aware of being in a small, gloomy cabin. I wandered over to a glowing window and looked out at a scene from the north country: snow falling on an evergreen forest. A gray shadow stepped into view and stopped next to a tree. It turned toward me, and I saw that it was a wolf. The wolf pinned me with its piercing gaze, then fled into the forest undergrowth. I awoke then in truth, and as I stared up at my dark ceiling, the afterimage of that wolf remained.

I had already decided to become a nature photographer, but was still searching for a particular focus for my work. There were so many regions that appealed to me: the wilds of Alaska, the savanna of Africa, the Amazon rainforest, the Himalayas, the tropics of Southeast Asia, the poles . . . There were too many to choose from, and I struggled endlessly. I knew that if I was going to collect my life’s work into a book of photography, I would have to find a theme that only I could pursue. 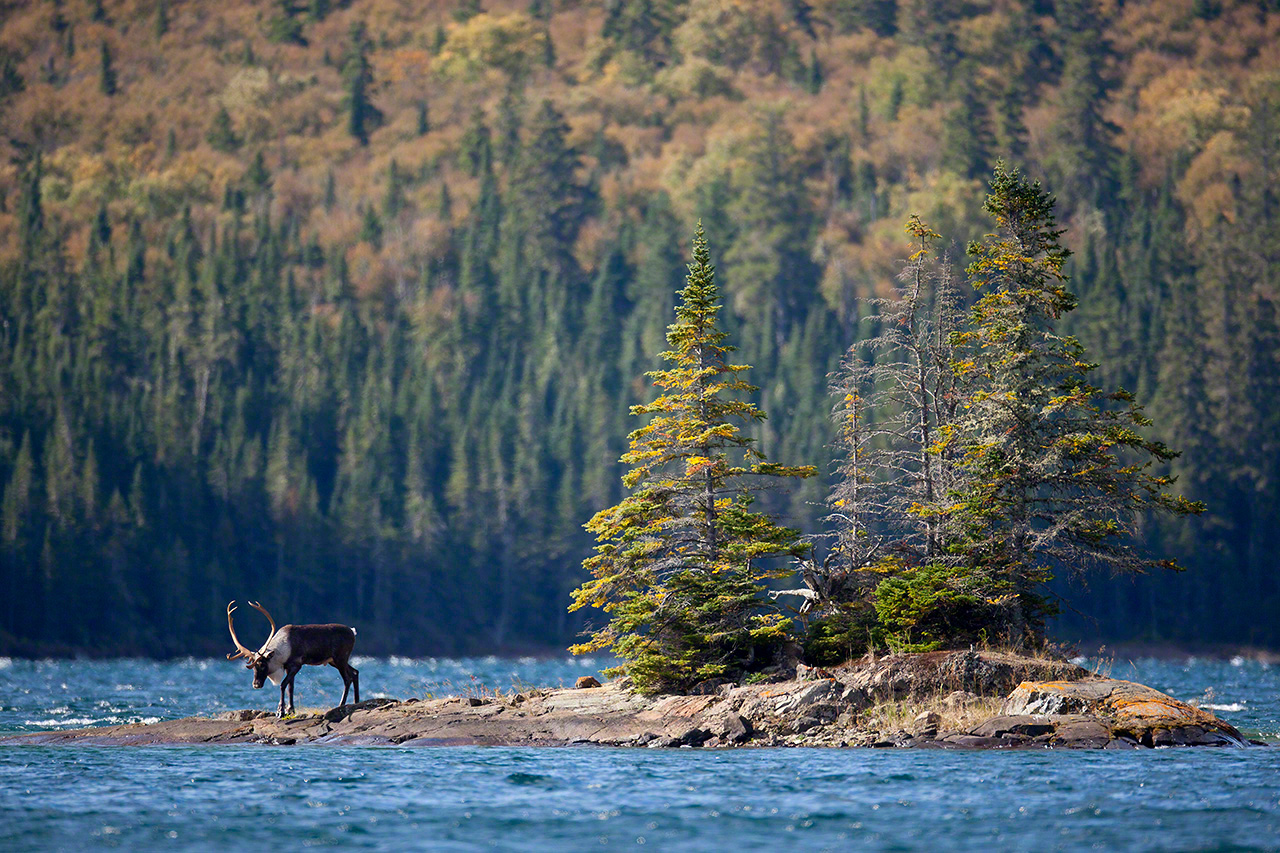 Until that dream, I had never even considered wolves as a topic. Wild wolves had vanished from Japan over 100 years before. I went to the library to learn more about them, and that is where I discovered Jim Brandenburg’s book of photographs and essays, Brother Wolf: A Forgotten Promise.

Brandenburg, a contract photographer with National Geographic magazine for over 30 years, is one of the world’s leading nature photographers, and Brother Wolf collects pictures of wolves he took in northern Minnesota. Looking through its pages, I found images that seemed ready to burst into motion, like the wolf of my dream. It was mesmerizing. I started thinking that a life where I could feel, hear, see, and smell that same natural world myself would be a marvelous one, indeed. I wanted to see a wild wolf with my own eyes. I had found my focus. 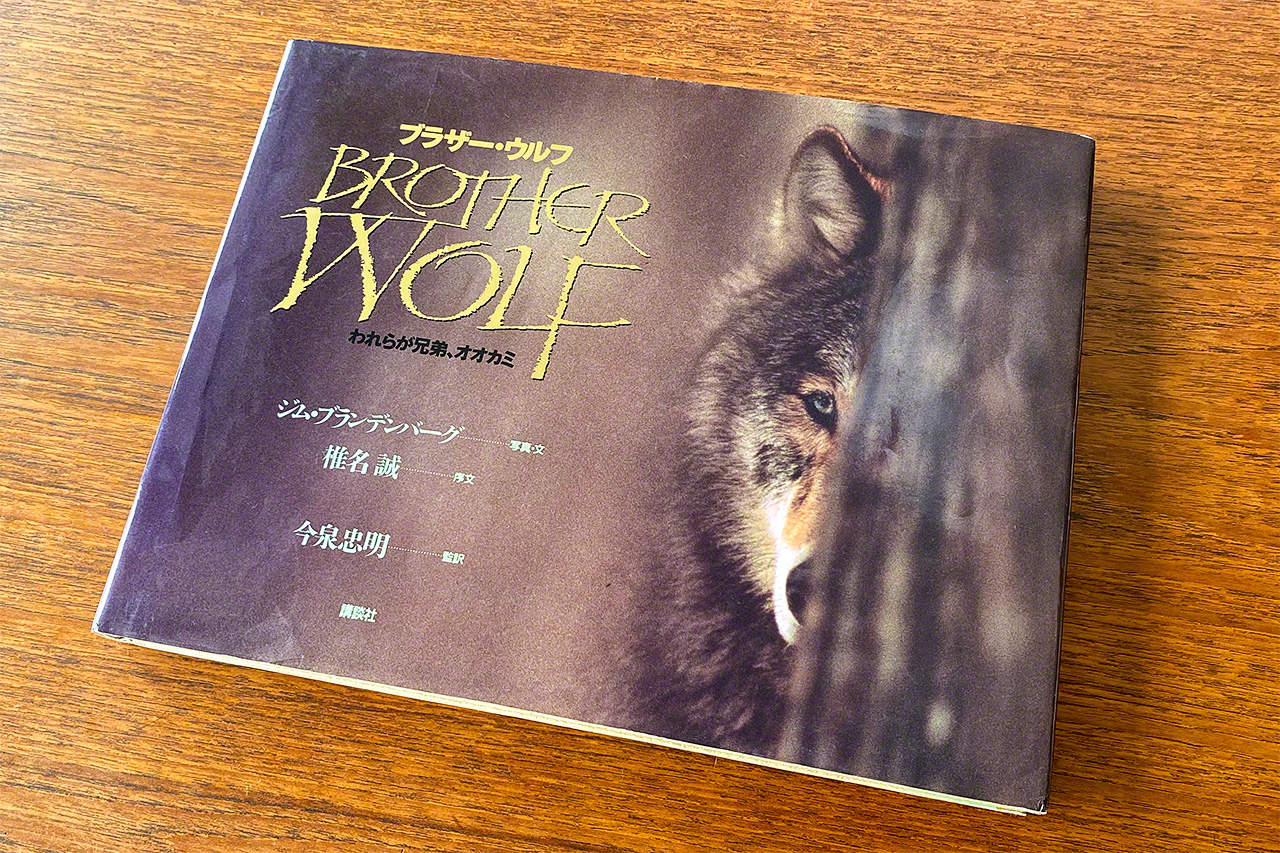 I would not say I was an avid outdoor enthusiast, or a photography lover, from childhood. I was born in Maizuru, Kyoto Prefecture, but we moved to Tokyo’s urban Setagaya when I was still in preschool. My family didn’t go camping or mountain climbing. My experience with nature was chasing dragonflies and butterflies around our apartment complex. I was also shy about anything that involved expressing myself in public, like music or art class, even into junior high school. On my way to and from high school, I stared out the train window at Shibuya’s packed scramble crossing every day. I was a city boy through and through.

I eventually decided to study sociology at university and become a journalist. I struggled with the entrance exams, though, probably because of my poor English. I mostly ignored it in school because I had no desire to go abroad. After two years trying, I finally got into my first-choice university, and there I discovered the Wandervogel club, which changed my life.

Encountering A Life Out of Doors

Wandervogel means “migratory bird” in German. The name was adopted for a late-nineteenth-century nature-oriented outdoor movement in Germany that spread to student clubs at universities around Japan in the mid-twentieth century. These clubs do a variety of activities, but the one that caught my eye was sawanobori, or “stream climbing.” This is a uniquely Japanese style of mountaineering in which climbers follow a mountain stream up toward its source.

We pitched tents along clear streams, warmed ourselves beside campfires, and slept under the stars. As I began to get used to camping out without electricity or running water, the so-called convenience of city life began to feel increasingly alien, and I found myself pondering deeper questions about life. What does it mean to be human? Where are we all headed?

Eventually, I realized I wanted to keep travelling further into the wilds after graduation. I wanted to explore more deeply the bonds between people and nature, and to share with others what I see and feel out there. The medium I chose for that was the camera, and so I became a photographer. 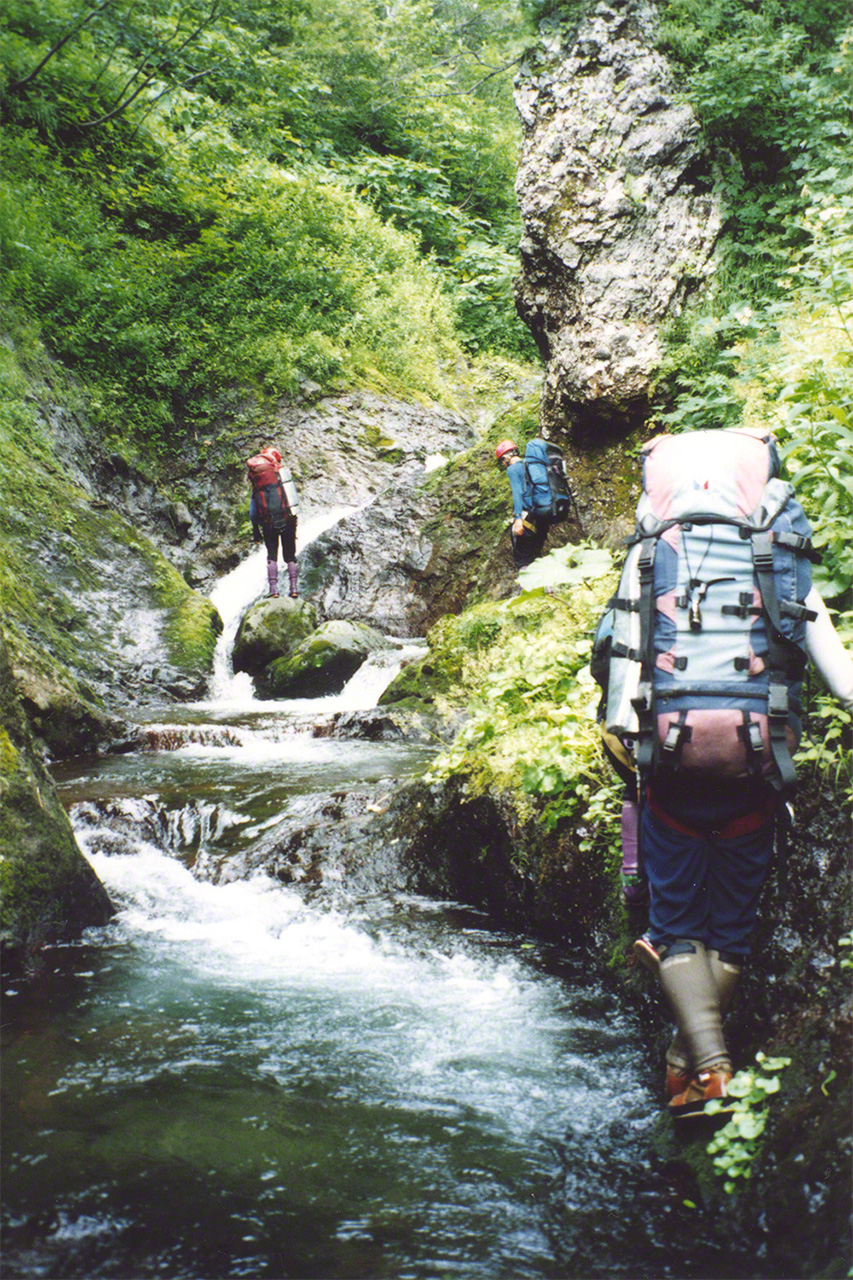 Sawanobori on the Shiretoko peninsula, Hokkaidō, during a summer camping trip in my first year of university. (1995)

Starting Out Ready for Failure

As soon as I decided to focus on wolves for my first major work, I wrote Brandenburg a letter. I volunteered to serve as his assistant to learn photography and the business while I worked. I knew this was an unlikely request to have granted, but I was determined to make it just the same. While all my classmates were finding placements even before graduating, I was not even looking for a job.

I graduated without getting a reply, but I didn’t even consider giving up. I decided to go and try knocking on his door in person. I knew my chances of meeting a world-famous photographer without any connections or introductions were basically zero, but if you start out ready for failure, what have you got to lose? The dream-wolf was leading me on a journey, and all I could do was follow to see what was waiting for me. It was a powerfully thrilling thought. 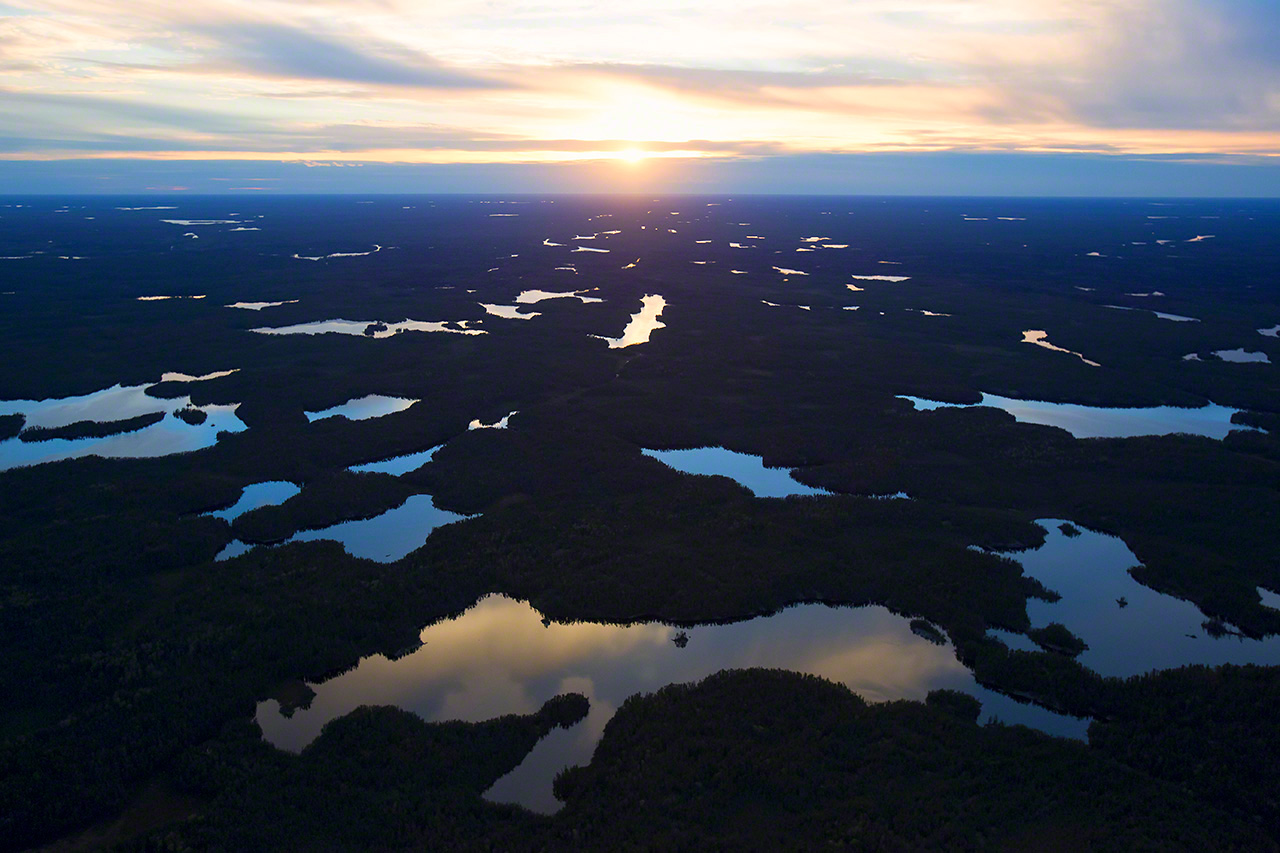 The Northwoods of North America from the air. (2016)

To a World of Lakes and Forest

I did not know exactly where Brandenburg was based, but in his book he wrote that the nearest town was Ely, in northern Minnesota. I shouldered my heavy pack of camping equipment and set out, making my first landing in the United States at Minneapolis International Airport. It was May of 1999. I had bought a discount ticket that did not allow for rescheduling, so no matter what happened, I was in the country for 90 days. I was ready for whatever was coming.

I took a Greyhound bus north to Duluth, but there was no more public transport from that point on. I had no idea what to do, so I explained my situation to the owner of the youth hostel I was staying at, and he kindly offered to drive me to Ely. On the map, I saw that the area was filled with countless lakes. It was a place called Boundary Waters Canoe Area Wilderness, one of the United States’ best areas for canoe exploration. I discovered that the studio I was looking for was on the banks of Moose Lake. There were roads leading there, but I didn’t want to rush in by car. If Brandenburg ended up turning me away, I would have hurried up for nothing.

I used the map to plan a water route there, then bought a beginner-friendly kayak, rather than a larger, more unwieldy canoe. I set out for Moose Lake. When there was no water access, I would have to portage my kayak and gear overland on wilderness trails, but there were only three such points, and they were short. Normally, the trip would only have taken three days, but I took my time.

The maps, compass, and kayak I used on my trip to meet Jim Brandenburg. (1999)

I was confident in my camping skills, but I was on unfamiliar land and traveling by water for the first time. I would be lying if I said I was not worried. I peppered the guide at the outdoor shop with questions before I left, though, and decided I wouldn’t be in too much danger.

I took a five-minute paddling lesson on the lake at my starting point. The kayak was much more stable than I had imagined. The water was close enough to dip my hands in it as I traveled, and my vessel shot across the surface with each stroke of the paddle. The movement was so smooth it felt less like I was working my way across the landscape and more like the scenery was coming up to meet me. It was a wonderful, fresh experience.

I made a little progress each day, whittling down my planned journey. It was simply a joy to travel across a landscape I had only seen in pictures. It felt like I was drawing my dream closer with each stroke of the paddle. 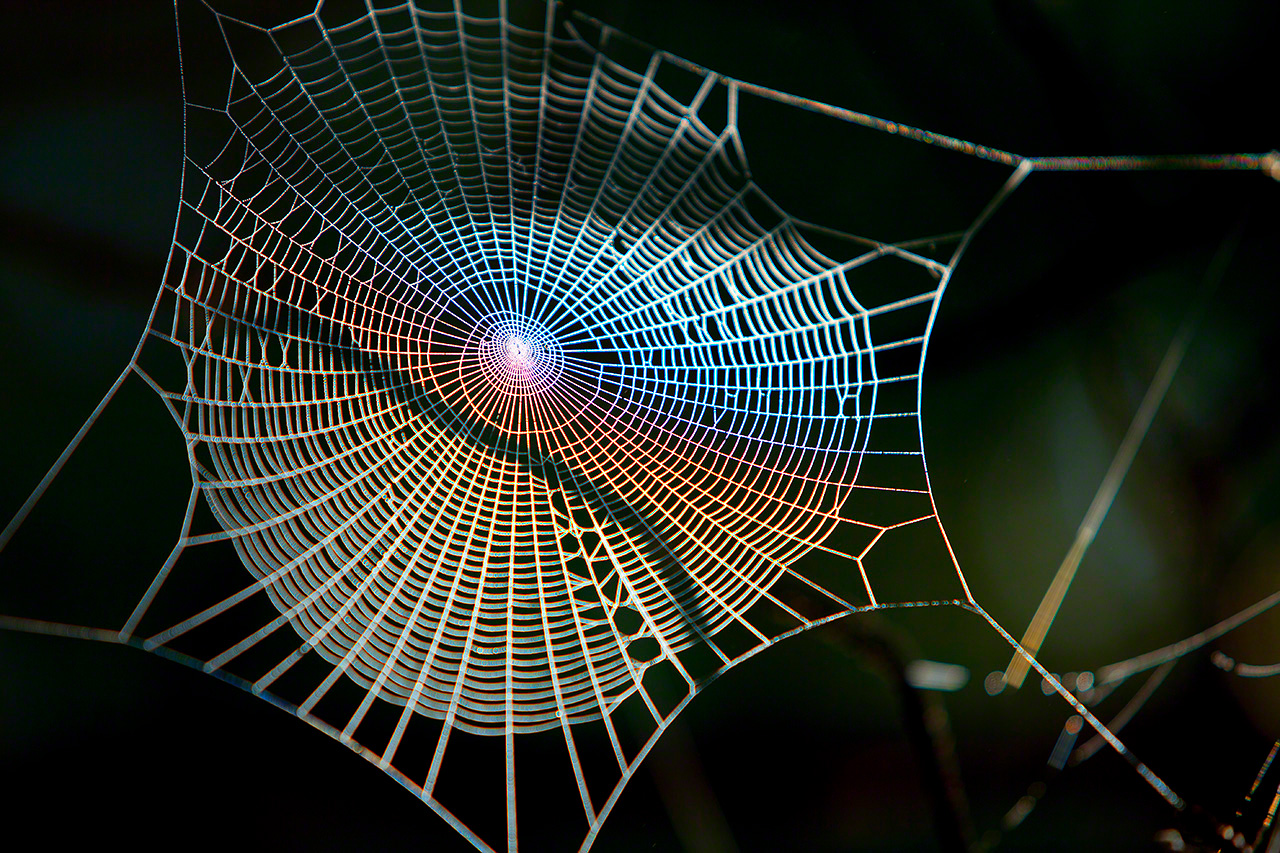 The journey was not without its stresses. The weather turned bad partway through, and although I got my tent up, it was not pleasant to tempt fate in the middle of a lightning storm. I was also unnerved by beavers slapping the water with their tails to try and drive me away. I was genuinely worried they would eat my wooden kayak paddle in the night. After eight days in the wilds, I finally reached Moose Lake. I stayed at a fishing lodge while I looked for Brandenburg’s studio, but all I found on the roads were forbidding signs: “Private Property. No Trespassing.” Once more, I was at a loss.

When in doubt, always ask for help. When I explained my difficulties to the lodge owner, he took pity on this stranger from distant Japan, who had come all this way by kayak, and arranged an introduction to Brandenburg through a mutual acquaintance. A few days later, he drove me to Brandenburg’s studio himself. If life is like a river, then passing through that gate was like going over a waterfall. 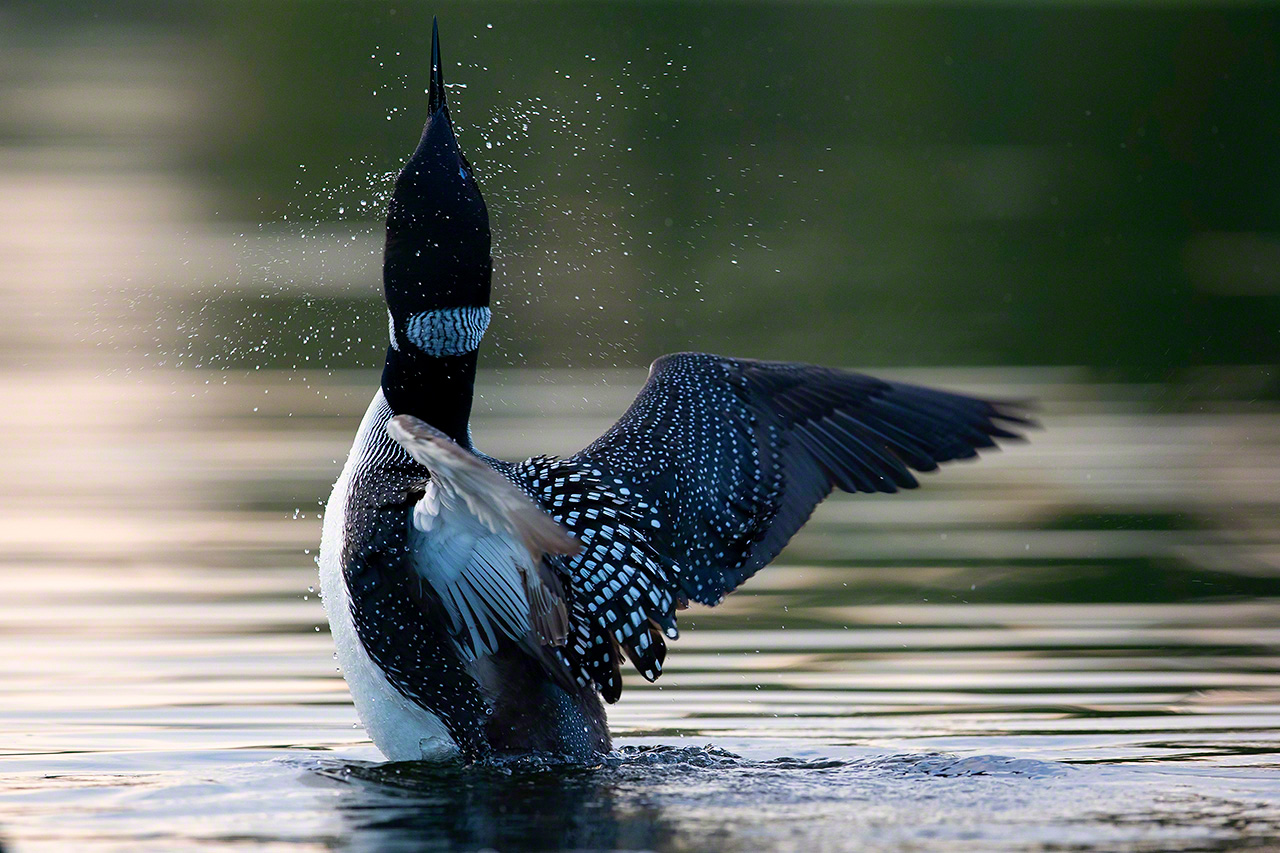 Taking the Long Way Around Pays Off

The first thing Jim Brandenburg did when he saw me outside his front door was to greet me in my native tongue: “Konnichiwa!” I had been anxious until the moment we actually met, but once the ice was broken I found much to talk about from my trip, like the loons and bald eagle nests I had seen. It was a good thing I had taken the long way round to come by kayak, in the end.

However, I eventually had to stop the friendly chat to bring up the real purpose of my trip. I needed an answer to the request in my letter. Could I be his assistant, or not? 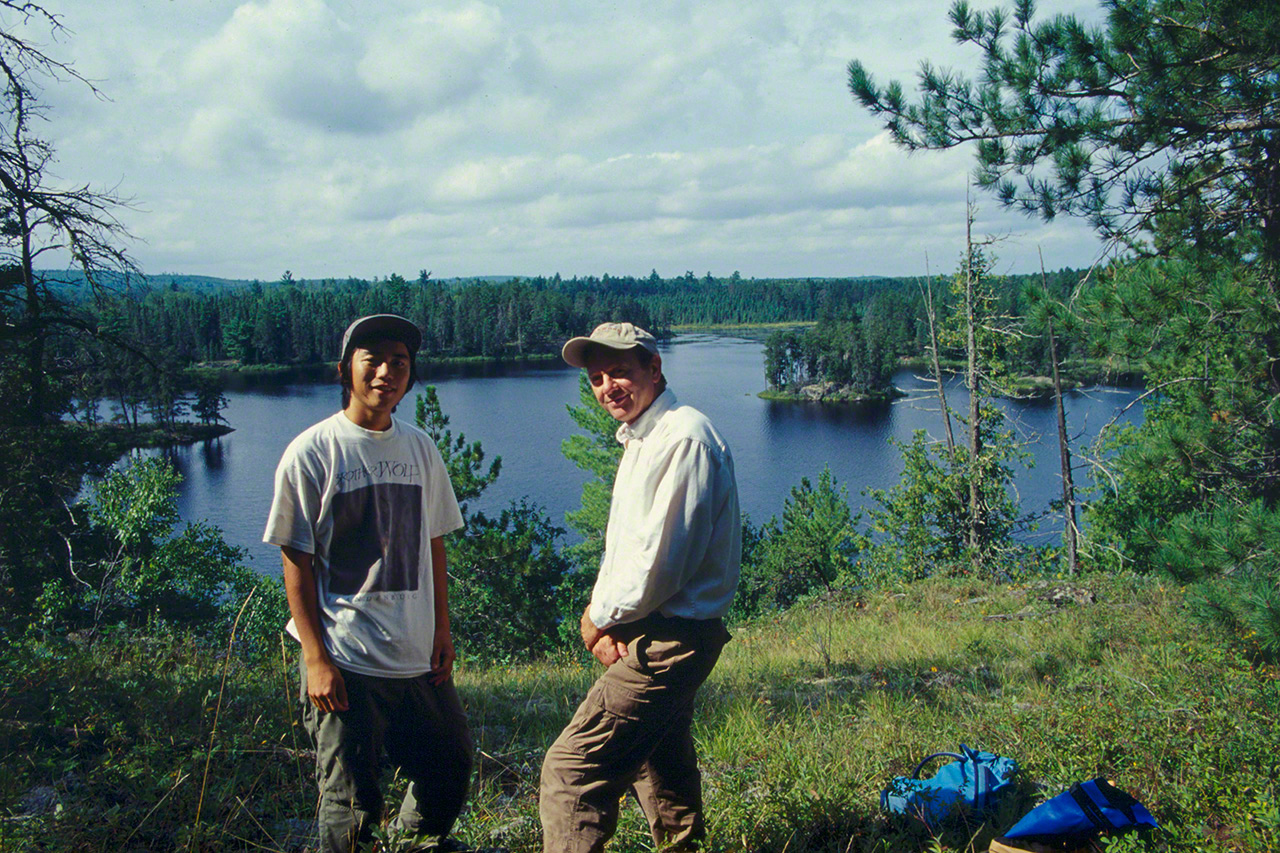 (Originally published in Japanese. Banner photo: A wolf wrapped in winter fur crosses the snow in the –40° Celsius winter weather of northern Manitoba, Canada, in January 2015. All photographs © Ōtake Hidehiro except where otherwise noted.)