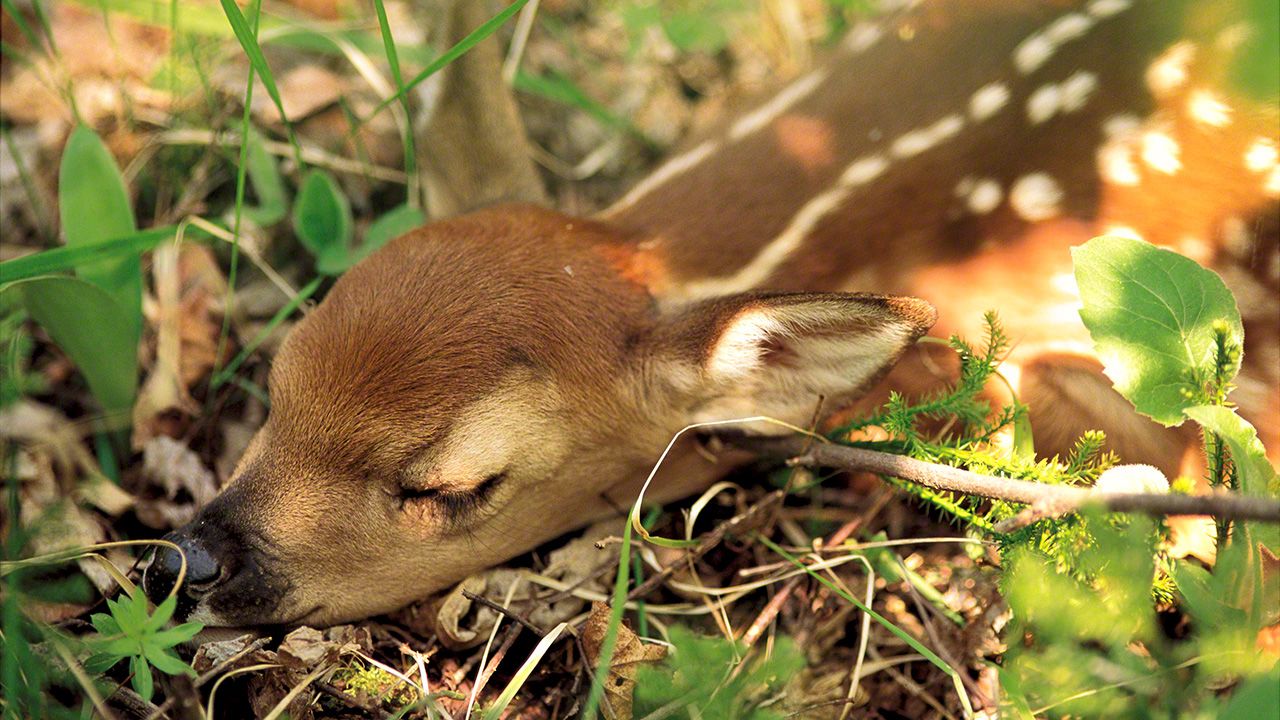 Travel Environment Lifestyle Sep 2, 2021
In the second installment of his career retrospective, photographer Ōtake Hidehiro describes how he started shooting in North America with his hero, photographer Jim Brandenburg, and his encounters with the famed explorer Will Steger. However, his photographic journey was not destined to be a smooth one.

I had sent a letter to American nature photographer Jim Brandenburg asking to be taken on as his assistant, but now that I finally stood before him, I found out it never reached him. And so, having gone to meet him at his studio near Ely, Minnesota, I tried to tell him in person all that I had written. I found I could get only partway through before tears overcame me, and I could no longer speak. Jim told me not to worry, though—that my tears only showed that I was speaking from the heart.

Still, he answered my request with gentle refusal, saying that he did not need an assistant. However, he saw my sincerity, and offered a compromise. He told me, “It’s important to face the natural world alone. Good work takes time, so you should start shooting now.” And so, Jim let me spend the remaining two and a half months of my stay in America in on his property. I would be able to shoot alongside this man whose work I admired so much. He even said he would look over my work for me. I could not be his assistant, but my trip had still worked out in the best possible way. 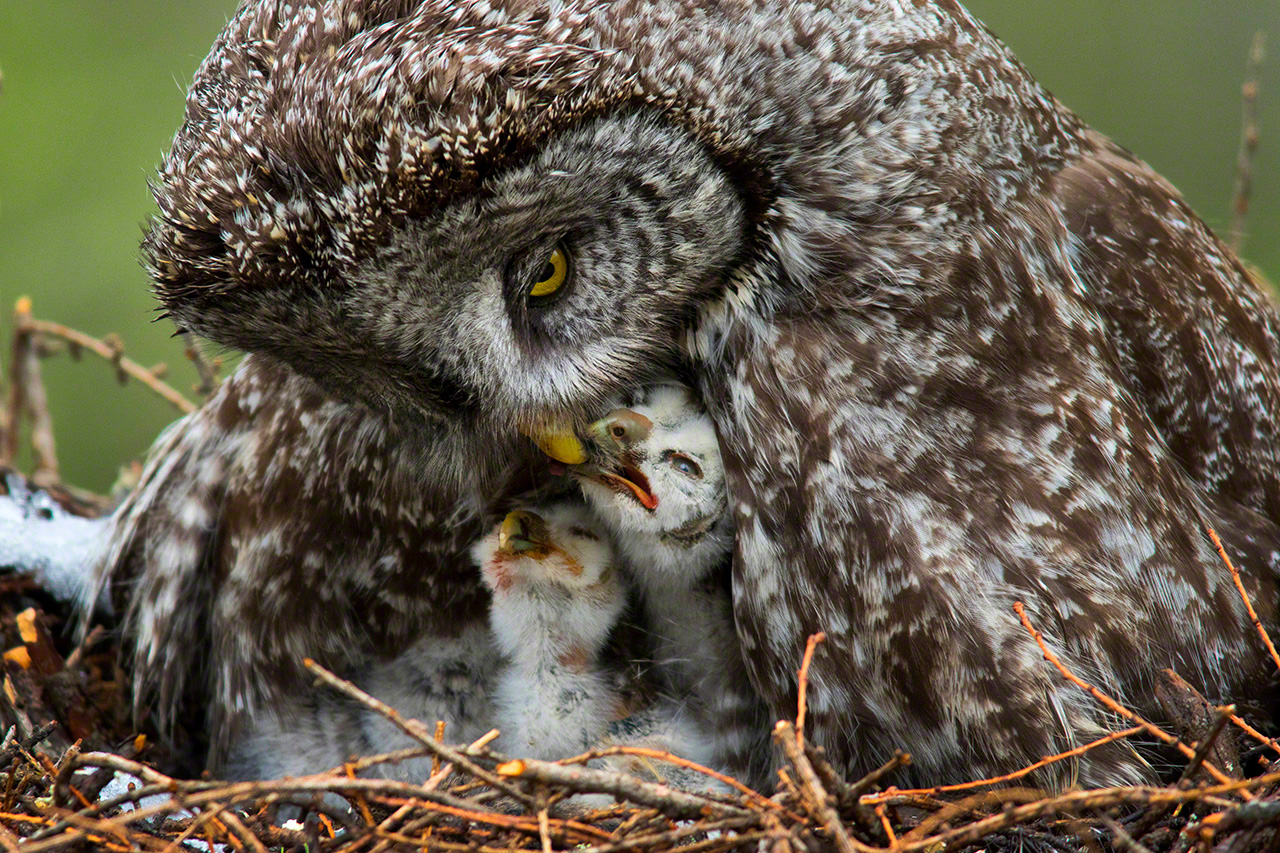 Every Journey Begins with a Single Step

While I was staying there, Jim introduced me to Will Steger , considered the greatest living American explorer. In 1989–90, Steger led an international team with members from six countries in the world’s first successful Antarctic traverse by dogsled.

When we met, Will had already put his dog-sledding days behind him, and had built the five-story Steger Wilderness Center in the woods near Ely to serve as a base for environmental education and advocacy. As my time in Minnesota went on, I also stayed at Will’s lakeside boathouse, helping to revarnish window frames while shooting the surrounding wilderness. My experiences with this man of historic stature would shake many of my preconceptions to their foundations.

The Steger Wilderness Center, at left, stands in the deep woods (2000). The lakeside boat-house where I stayed (1999).

I spent days in a visual conversation with the natural world, feeling like I had somehow been reborn. That was still the age of film, and I could not check my pictures until they were developed. I would often end up depressed after developing my rolls of film. The photographs were all so far from what I had imagined.

Just before I had to return to Japan, I finally had the chance to get Jim’s feedback on my work. He picked out some that he liked, saying “These are beautiful. You have a good eye.” I rebuffed his compliment, saying “That can’t be true. Please, be honest.” He insisted: “Technical points are all things that you can learn with practice, but the most important thing is what it is that you are trying to see, what is in the heart,” he replied. “Most people automatically look to flowers or wildlife, but you focus on other things—the morning dew, the forest silhouette, and even all these different colors. I really like your eye,” he said. In that moment, I felt that while I still lacked technical skill, I might still be headed in the right direction. 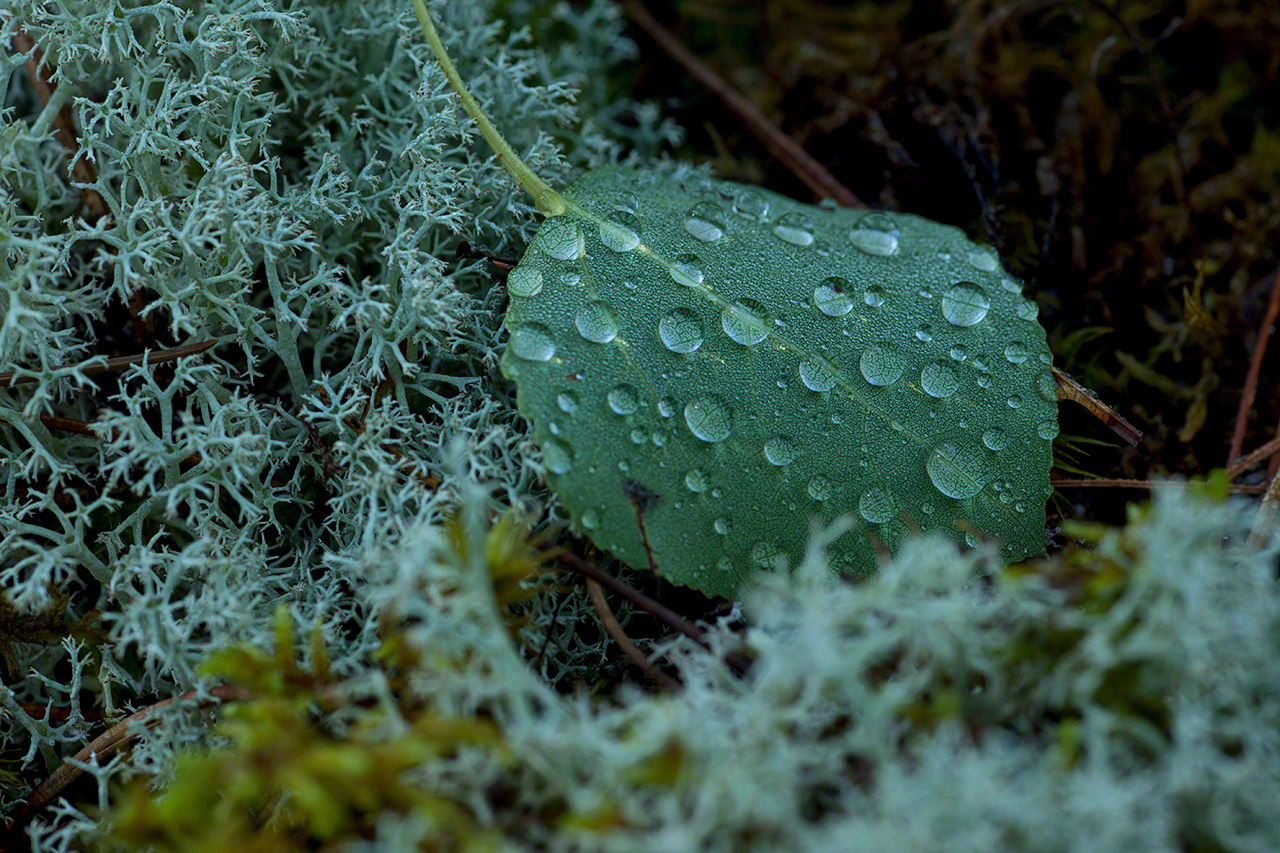 A Cycle of Work and Travel

I said goodbye to Jim, and my three-month stay in North America came to an end. My pursuit of the dream wolf had only just begun, though. After I came back to Japan, I started working part-time to save up money. I would work to earn money to go back to Ely, then come back to Japan when the money ran out, and work to earn some more. That cycle went on for three years. During my time in Ely, I borrowed a small cabin on Will’s land that had been built by the British explorer Geoff Somers, a member of the Trans-Antarctic Expedition, and helped out with firewood-chopping and other chores while I continued my work. 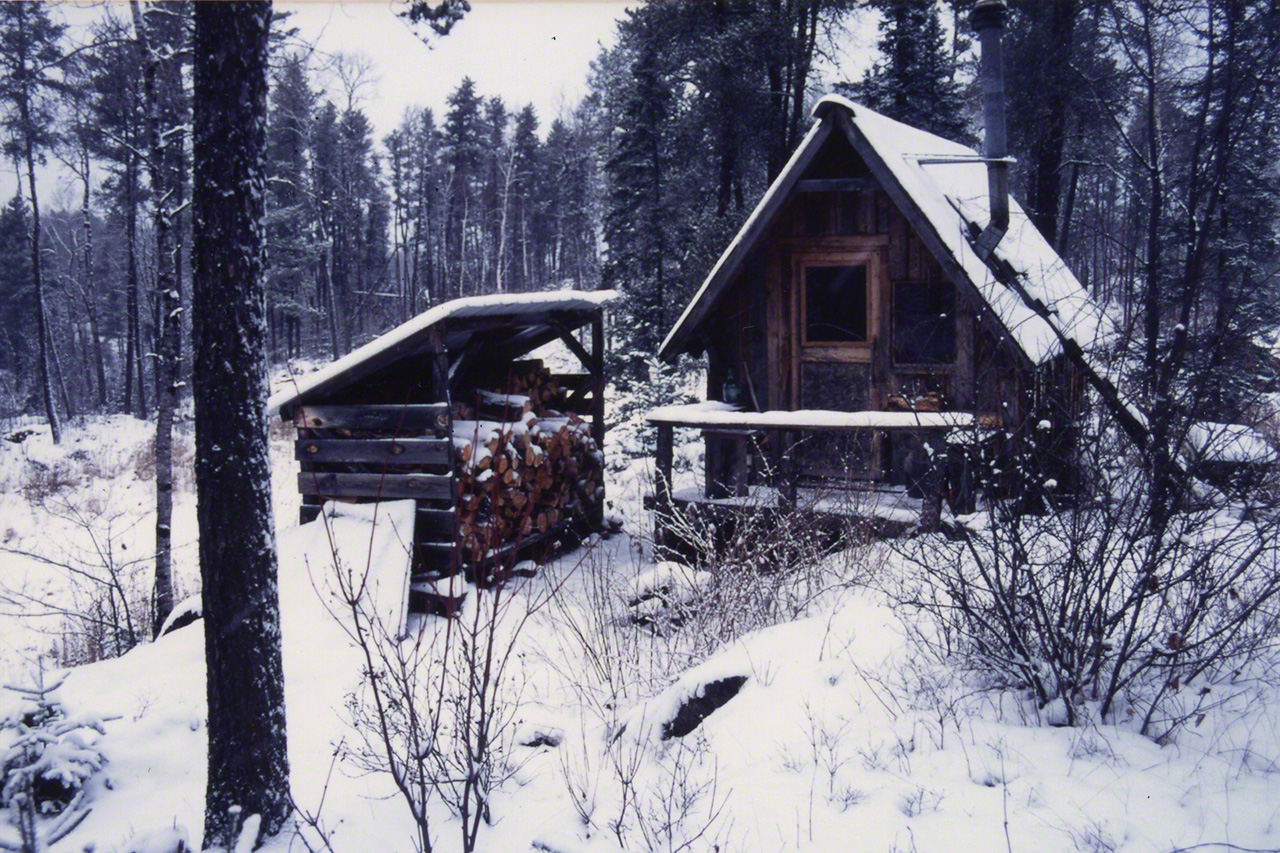 The cabin at Will Steger’s homestead where I stayed while shooting. (2001)

I continued searching for wild wolves in the woods. I inquired with biologists and the Department of Natural Resources in Ely, but no one had any reliable information. Still, I searched on.

I heard once about a marsh where moose supposedly roamed, and so I waited there from dawn for a sight of the predators. I walked animal trails, and once nearly stepped on a newborn fawn. The fawn showed no sign of fear, simply doing its best to blend into the undergrowth, its only defense in those wolf-inhabited woods. In autumn, I encountered busy red squirrels gathering pinecones, and at night was dazzled by my first glimpse of the northern lights. These experiences were all wonderful, but my wolf picture remained out of reach. I found fresh tracks and scat, but never the animal that left them. Wolves are elusive, cautious creatures, and avoid the human gaze with great skill. 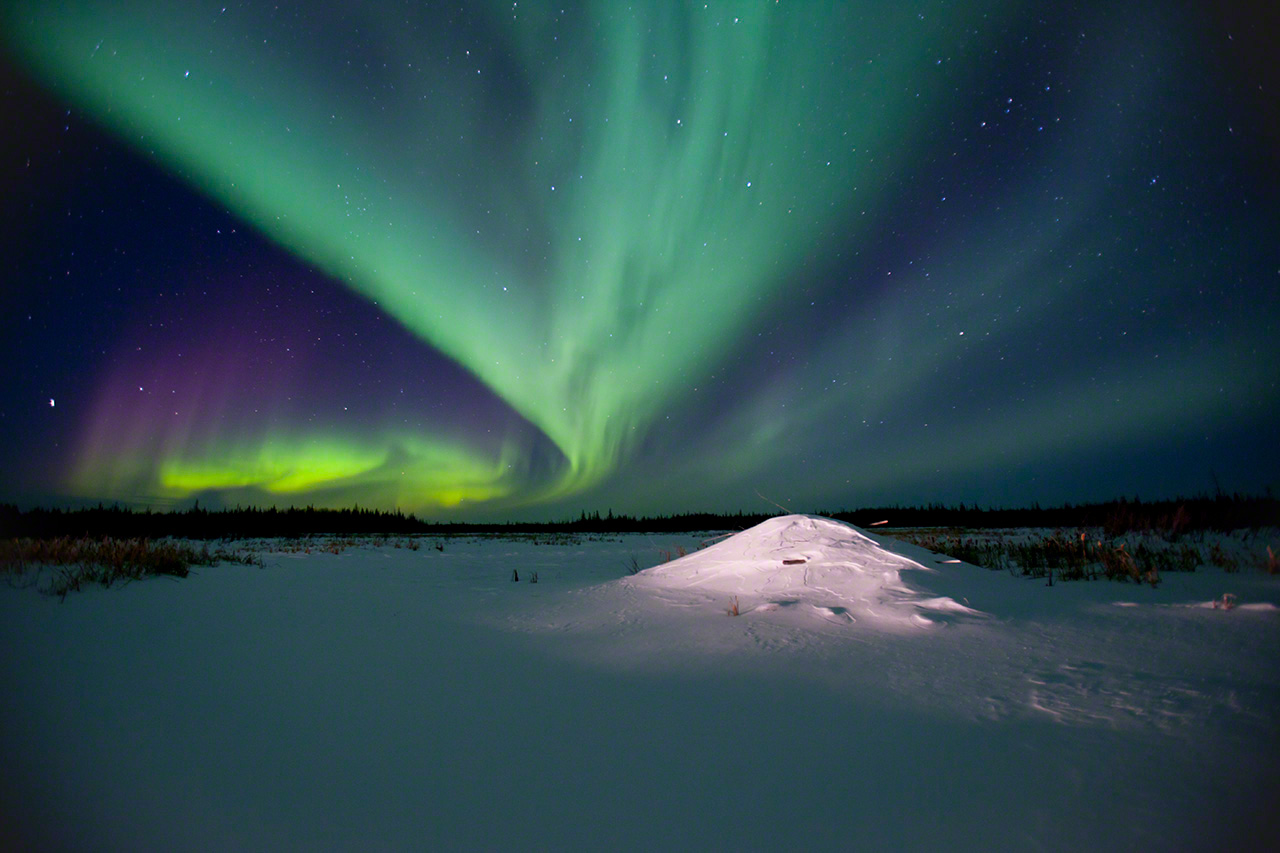 The dazzling northern lights above a snow-shrouded beaver lodge. (2011)

I came to realize that most of my shots were of fallen trees. I could not get the pictures I wanted, and found myself in a mental rut. At the end of 2001, I awoke one day in my room and came to a cold realization. Living as an artist would mean spending my life walking a tightrope over a deep ravine. It was fine in the beginning, when pure enthusiasm could keep me moving ahead, but once that cooled and I looked down at the chasm gaping below my feet, I found myself frozen. I saw that I simply did not have the talent. It was a hard thing to accept, but if I wanted to move on with life, I would have to give up being a photographer. 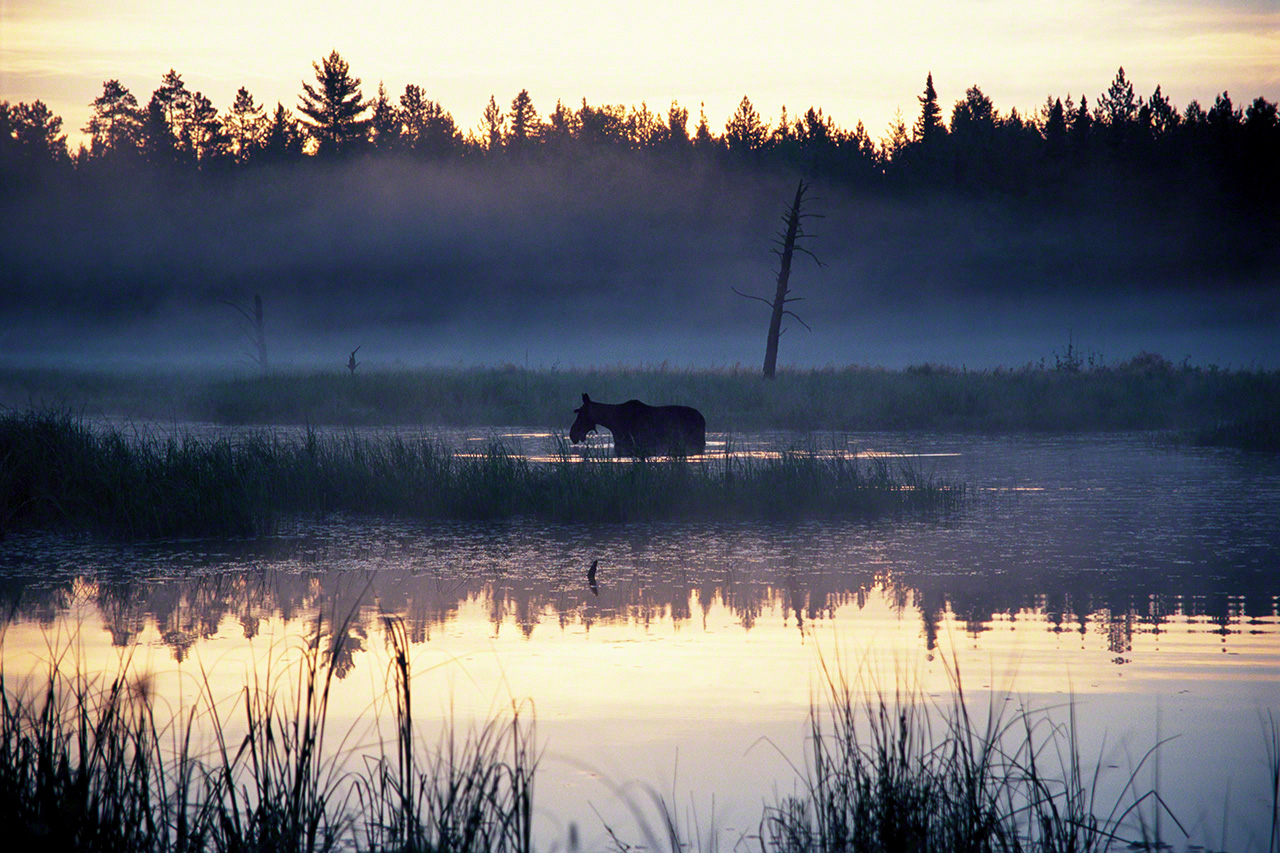 I started to look for work in other careers. I was eventually picked up by an editorial production company that served a variety of magazines. It was a part-time position, but I still found myself staying every day until late at night. My job title was editorial assistant, but they also asked me to take pictures, since I already had the equipment. The work they needed was unfamiliar to me, and required taking pictures of people, shops, and even food, all of which require special skills with flashes and filters. I ended up mimicking other photographers and studying their techniques as hard as I could. After a year of that, I finally felt satisfied with the pictures I was taking, and I went independent. It was right around then that I started frequenting a café called Heikinritsu, a place I had shot for that work, and which would end up changing my life. 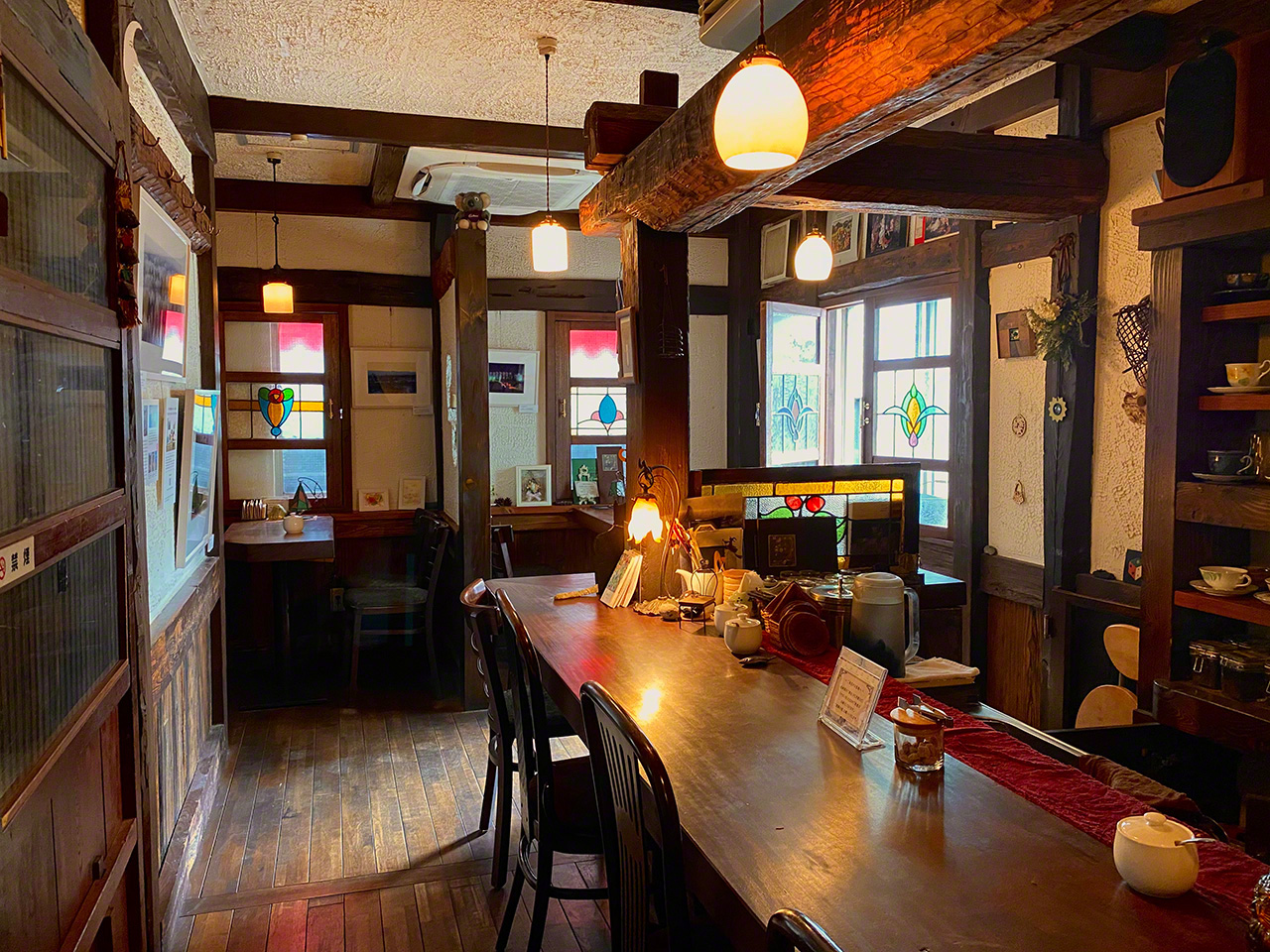 The shop’s name come from the Japanese name for Bach’s Well Tempered Clavier, and it was, naturally, a classical-music themed café. I enjoyed the calm atmosphere and the charcoal-roasted coffee served in elegant cups. I became a regular. Then, one evening in 2003, I told the owner about how I used to go back and forth to Minnesota to take pictures. He said, “Show me some!” When I came the next time, I brought him an album, and he said: “These are good. What do you think about putting on an exhibition here?” 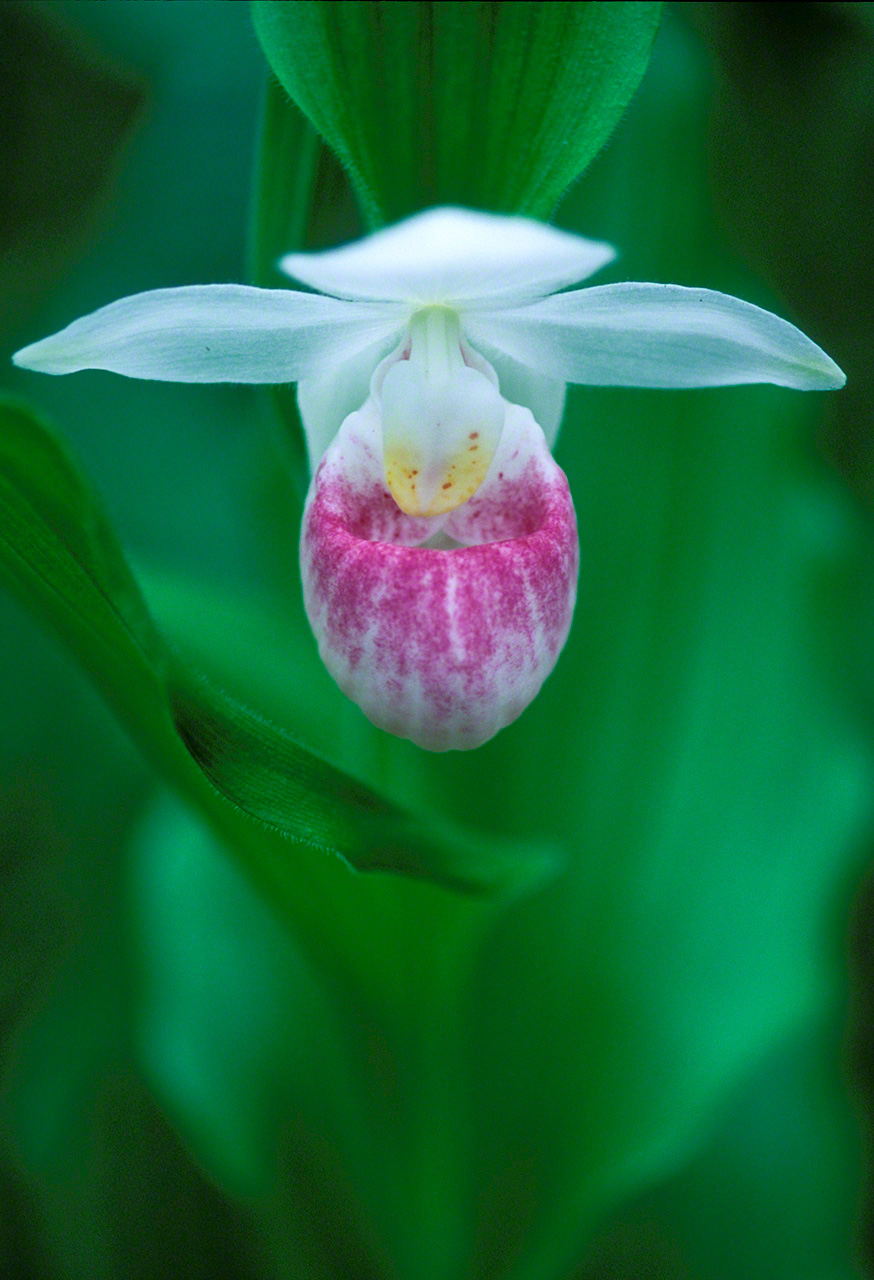 A showy lady’s slipper, the state flower of Minnesota. (2000)

I suppose that somewhere deep inside, part of me had never given up. When this chance at showing my work came, I jumped at it. I sent fliers to editorial departments at different magazines in hopes of getting as much exposure as possible. An exhibition by a no-name photographer dealing with a place they had never heard of was not much of a draw, apparently. Still, one person working in the publishing industry noticed: an editor with the magazine Takusan no fushigi (A World of Wonders). 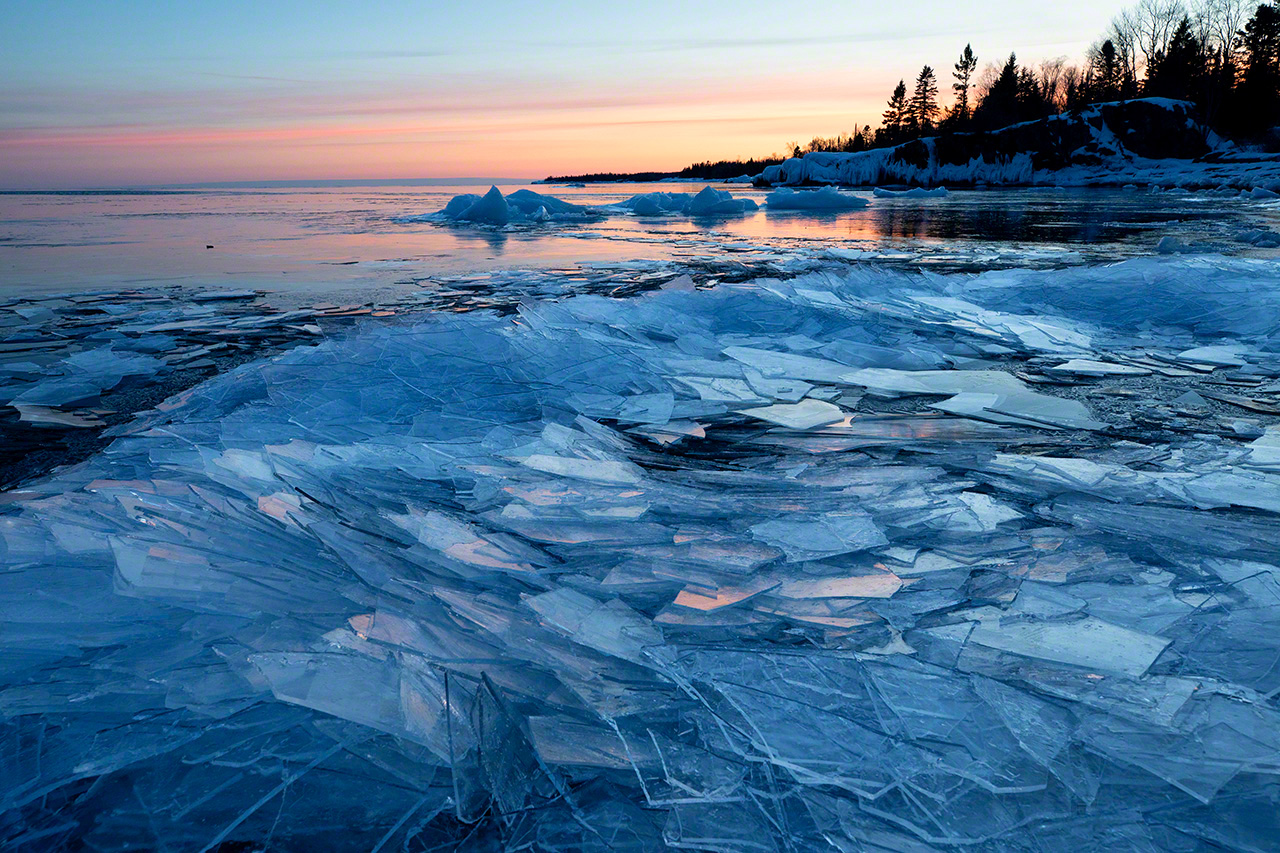 Sunset over Lake Superior, with the night’s fresh ice piled against the shore. (2018)

He emailed me, and we arranged to meet a few days later at Heikinritsu. When the veteran editor showed up, his manner was calm, but his words rocked me. “I’m just two years from retiring, but I feel like I’ve finally found what I’ve been looking for. . . . Would you like to publish a book with us?”

Takusan no fushigi is a monthly illustrated magazine-style book series that started in 1985. It is aimed at third and fourth graders, but it also has many adult fans. I myself was one, and I had discovered the series because photographers I respected, like Hoshino Michio and Imamori Mitsuhiko, had worked with the publication. An offer from this dream publisher was like a gift from heaven. At the same time, though, I was not sure my work was good enough. I went home and worked over some ideas. I eventually thought of arranging photographs of the northern landscape and its wildlife by season. I had never seen any wolves, but I felt I could convey just how elusive they were through my experiences. 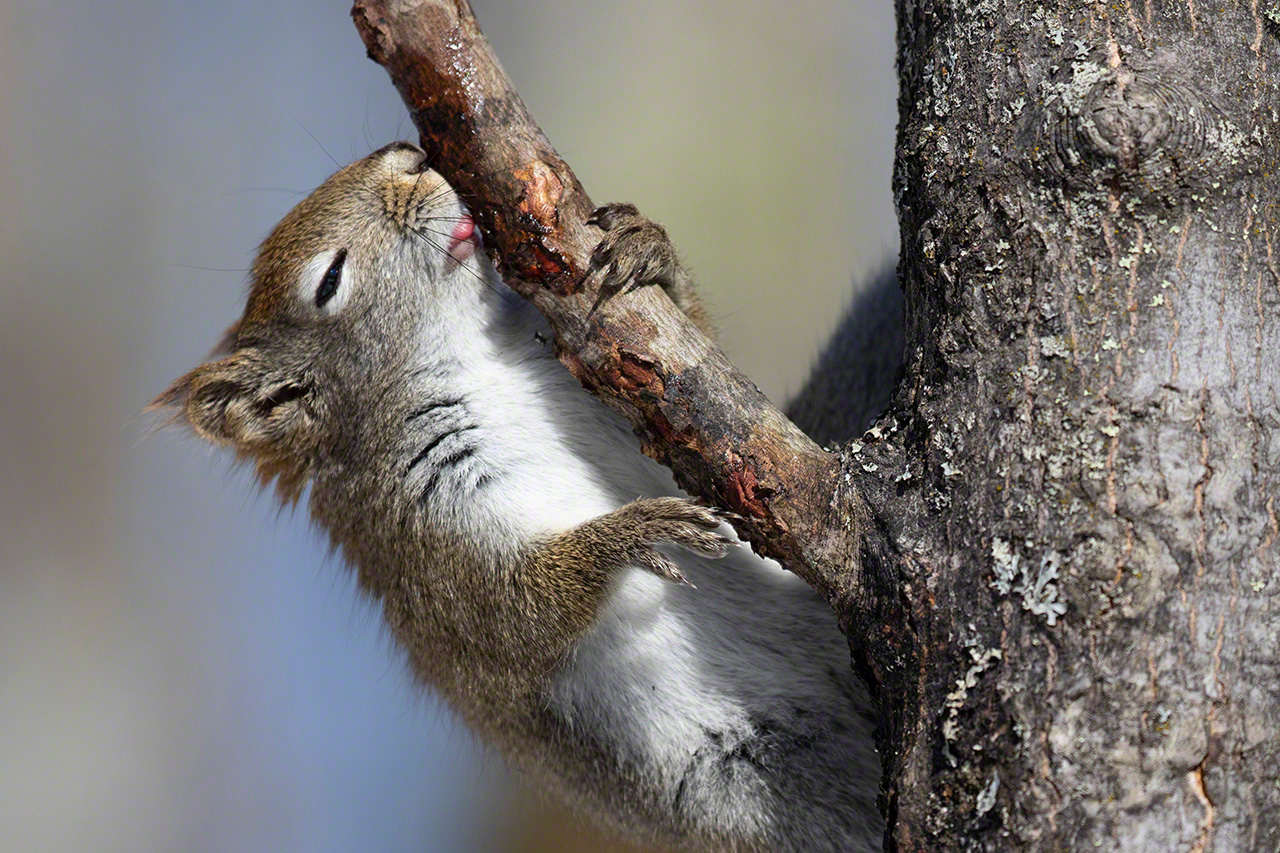 When I handed in that first manuscript, my heart was pounding so hard I thought it would burst. I was terrified that the editor would be disappointed. He looked through the manuscript then and there, and said: “Just as I thought. Ōtake-san, you’re a natural at children’s books. This is fine, and you’ll get better.” I cannot express just how encouraging it was for this publishing veteran, who had worked with legendary children’s book authors like Horiuchi Seiichi, Anno Mitsumasa, and Ishii Momoko, to give me his seal of approval.

We titled that first book Nōsuuzzu no mori de (Living in the North Woods). The editor told me it would come out as the September 2005 issue. “Now, please . . . get back out in the field soon. I know you can do this, Ōtake-san.” 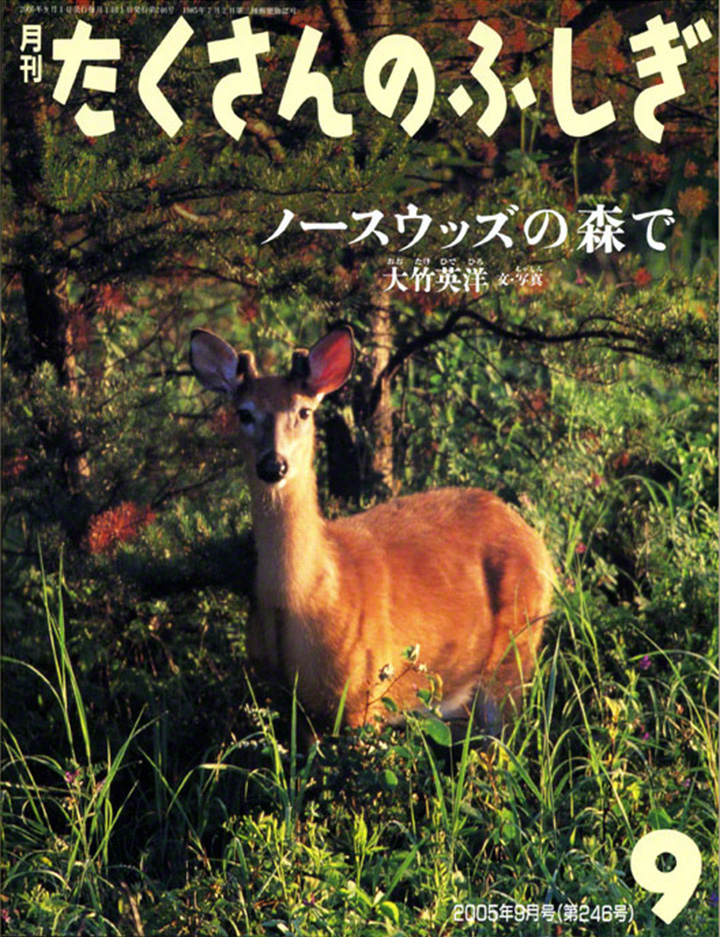 Nōsuuzzu no mori de (Living in the North Woods), the September 2005 issue of Takusan no fushigi (A World of Wonders). The book is now available in a special hardcover edition.

(Originally published in Japanese. Banner photo: A newborn fawn encountered on the trail in 2000. Its only defense from the wolves in the forest is to stay still and remain undetected. All photos © Ōtake Hidehiro except where otherwise noted.)