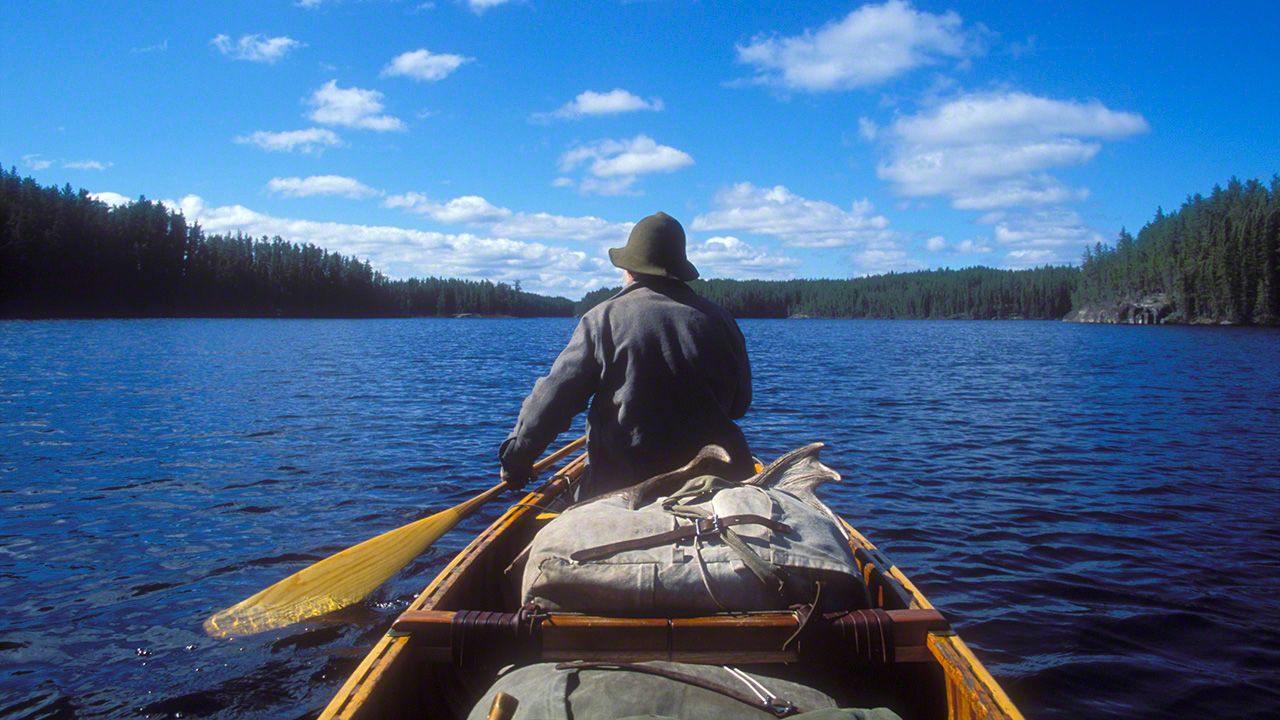 Images Travel Culture Art Sep 27, 2021
In this third installment of nature photographer Ōtake Hidehiro’s five-part retrospective, he has returned to the field after a dark time when he considered giving up photography. He sets out on a three-week canoe trip across fresh-thawed Canadian lakes, getting closer to the true Northwoods than ever before.

A Promise Two Years in the Keeping

I had quit nature photography after years of what felt like insurmountable failure. However, a chance meeting that seems now like fate put me back on the path forward, and I decided to return once more to the North American wilderness I had come to love so well. Soon after that decision, the memories of a canoeist I had previously encountered were reawakened.

In the autumn of 2001, I was camping on the lakeside just outside Ely, Minnesota, when a bearded man in a traditional Canadian-style wooden canoe came paddling up. He introduced himself as Wayne Lewis. He was in his late fifties, and our shared love of nature made us easy friends. He invited me to dinner at his home in town, where he cooked wild rice and made a venison stew, the ingredients for both of which he’d harvested himself, accompanied by home-baked rye bread. Over dinner, he told me about his many canoe trips. 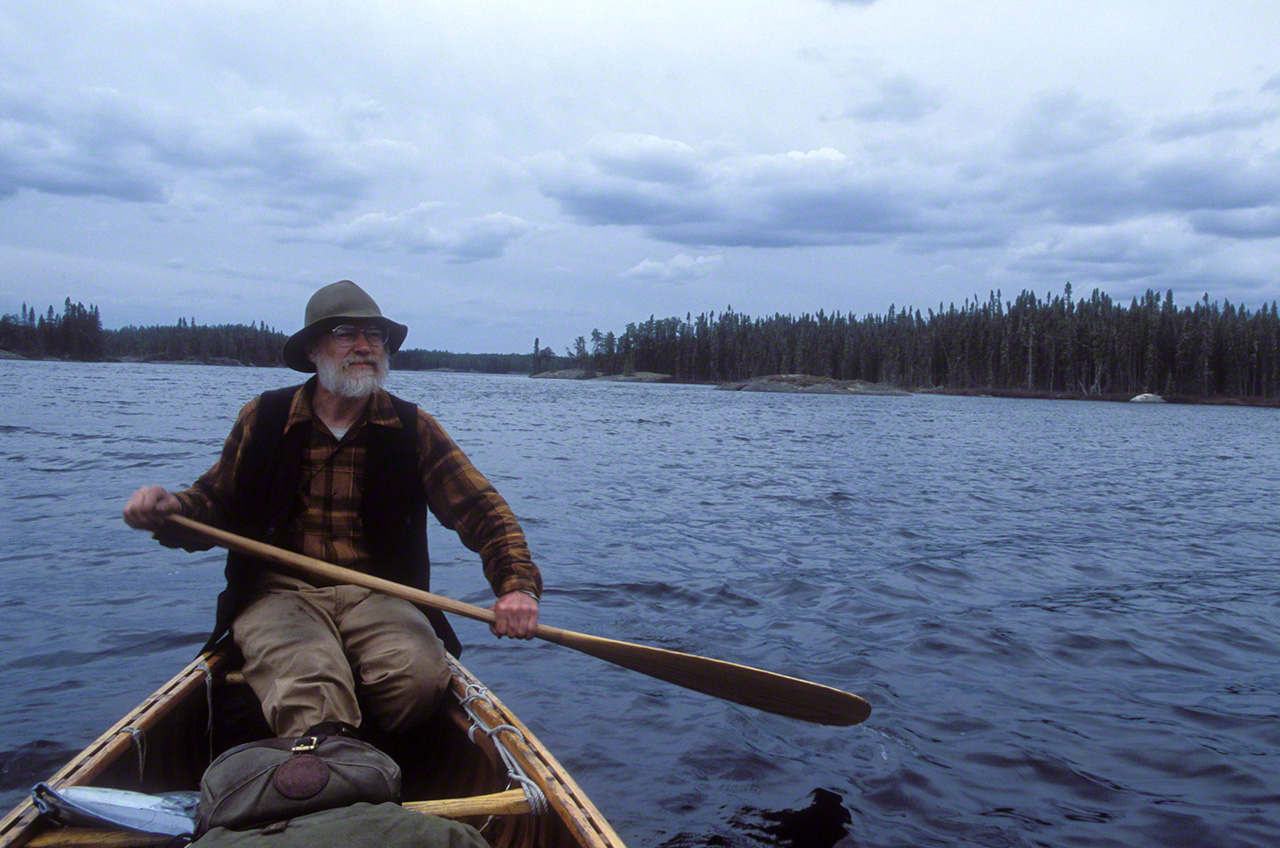 Wayne Lewis paddling across the water. (2004)

Wayne said he’d first started canoeing in the summer of his fourteenth year. His older brother took him along on a canoe trip that started from Boy Scout Base on the Moose Lake next to the Boundary Waters Canoe Area Wilderness. Wayne grew up in the tame cornfields of Iowa, so the 10-day wilderness trip captivated him. For the next 40 years he sometime worked at an iron mine and mostly practiced carpentry, but canoeing was what he lived for.

In recent years, his search for peaceful surroundings had taken him to Woodland Caribou Provincial Park in northern Ontario, Canada. “Going back to the same campsite a year later, I would find the remains of my fire left like I had just been there yesterday,” he said. He explained that he particularly liked setting out on his trip as soon as the frozen lakes thawed, when the early spring forests are filled with birdsong. As the days passed, flowers would start to bloom and the winter-faded world would explode with color, as if it were coming back to life. He tried to put into words what kept him traveling, but in the end he simply shook his head. “I just can’t explain it. You have to experience it for yourself.”

His stories of long canoe trips, each lasting from a couple of weeks to over a month, stirred a longing in me. Traveling into the deep woods with a Canadian-style canoe, a Northwoods invention itself, would help me experience the wilderness more directly. “I’d like to go with you someday,” I said, and Wayne responded, “It won’t mean anything unless we go for at least three weeks.” We made a promise that we would, one day, go together. That promise stayed unkept for two years, though.

One day, in the beginning of 2004, I felt the time had come to set that stopped clock moving again. I got back in touch with Wayne after two silent years. 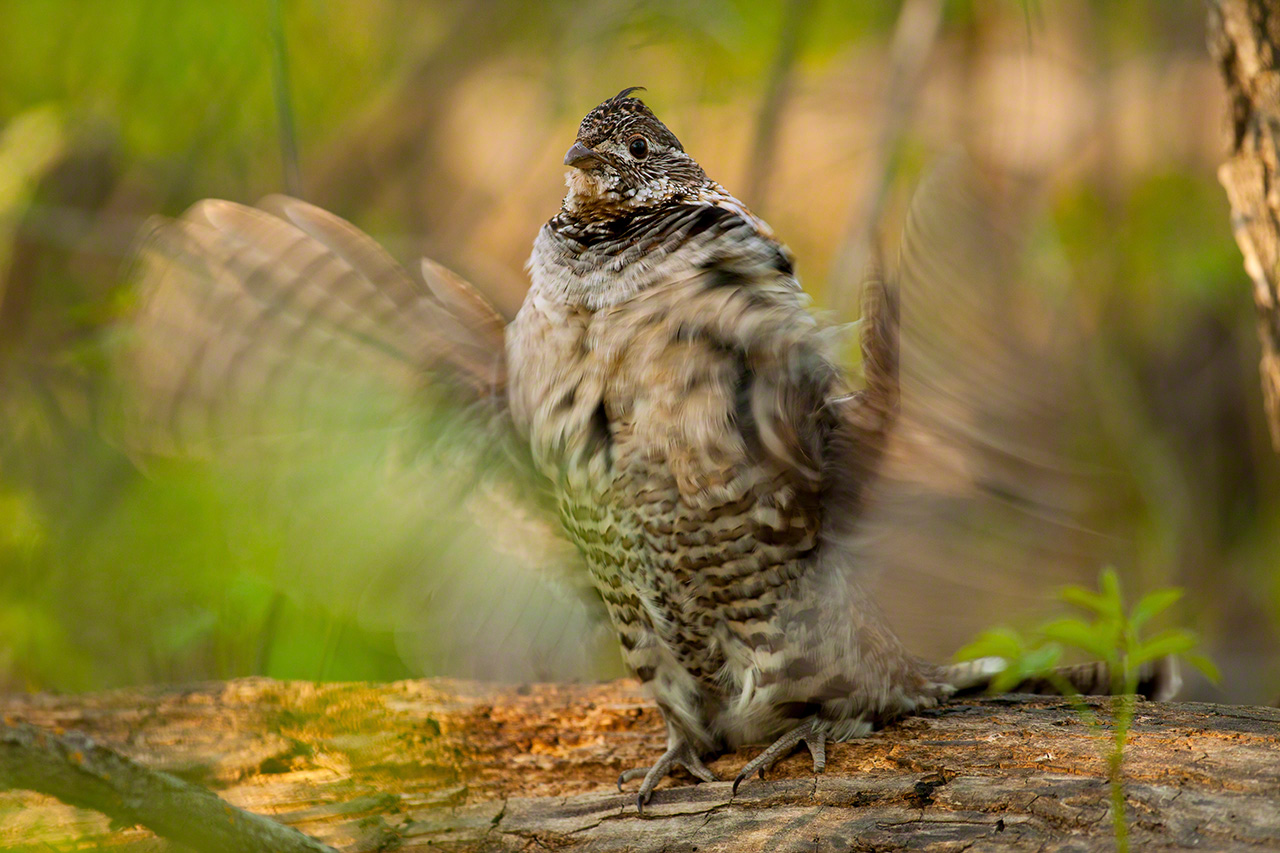 A ruffed grouse drumming its wings on a fallen log. (2010)

Three Weeks of Rations in a 40-Kilogram Pack

The unexpected contact surprised him, but he quickly agreed to take me on his next canoe trip, planned for May that year. We met up in Ely and finished our prep at his house. Much of his equipment was made of natural materials, which are quiet when they rub together and also blend well with the forest landscape. Our tent was made of tightly woven Egyptian cotton. We carried our personal effects, like sleeping bags or clothing, in canvas Duluth packs. Wayne wore leather hunting boots laced onto his feet, and a wool vest and shirts made by Filson on his upper body. Everything was sturdy, durable, and ready for the long trip. We also had a portable wood stove, a necessity for travel in the early spring when the snows can still fall.

Since it would be cold on the water, Wayne lent me some extra thick pants and shirts, as well. He also taught me about waterproof gear packing, just in case anything fell in the lake. Our food pack, filled with three weeks’ worth of rations, weighed in at over 40 kilograms.

Our destination, Woodland Caribou Provincial Park, was an eight-hour drive north from Ely. The woodland caribou that had given the park its name had also roamed Minnesota up until the 1940s, but land development has pushed their habitat north. Now the park is their southern limit. After driving two hours over rough, unpaved roads, we finally reached Leano Lake, our starting point. I had once considered Ely the ends of the earth, but now I faced the enormous Canadian wilderness. 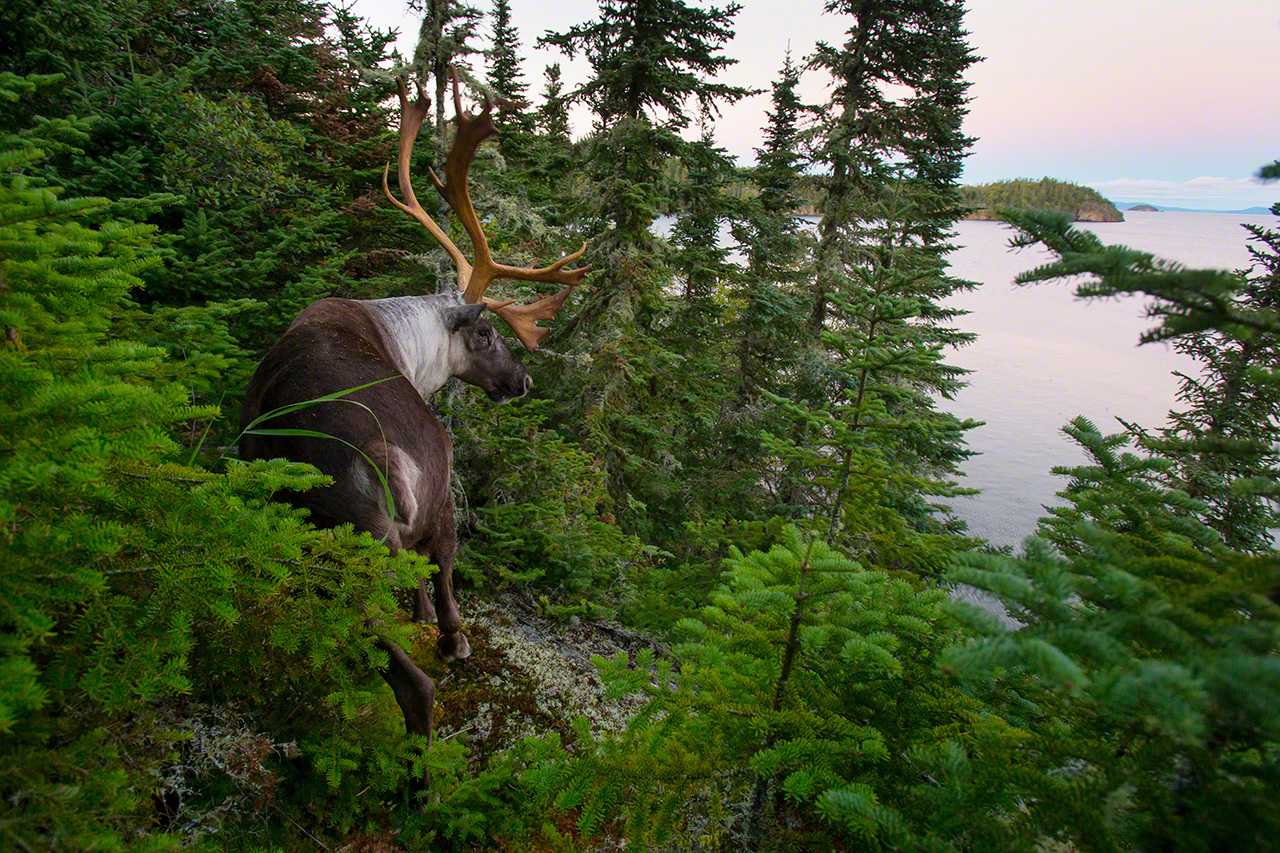 A woodland caribou gazing down from the heights. (2013)

We had one canoe. It was made from canvas stretched over a wooden frame, built by the legendary Ely-based canoe builder Joe Seliga in 1977. There were two seats, one each in the front (bow) and back (stern). Wayne sat in the stern to steer, while I, the novice, sat in the bow. I started paddling, and in back Wayne matched my pace. The cold wind across the freshly thawed lake cut like a knife, but our wood and canvas vessel moved silently and smoothly across the face of the water. It felt lovely. 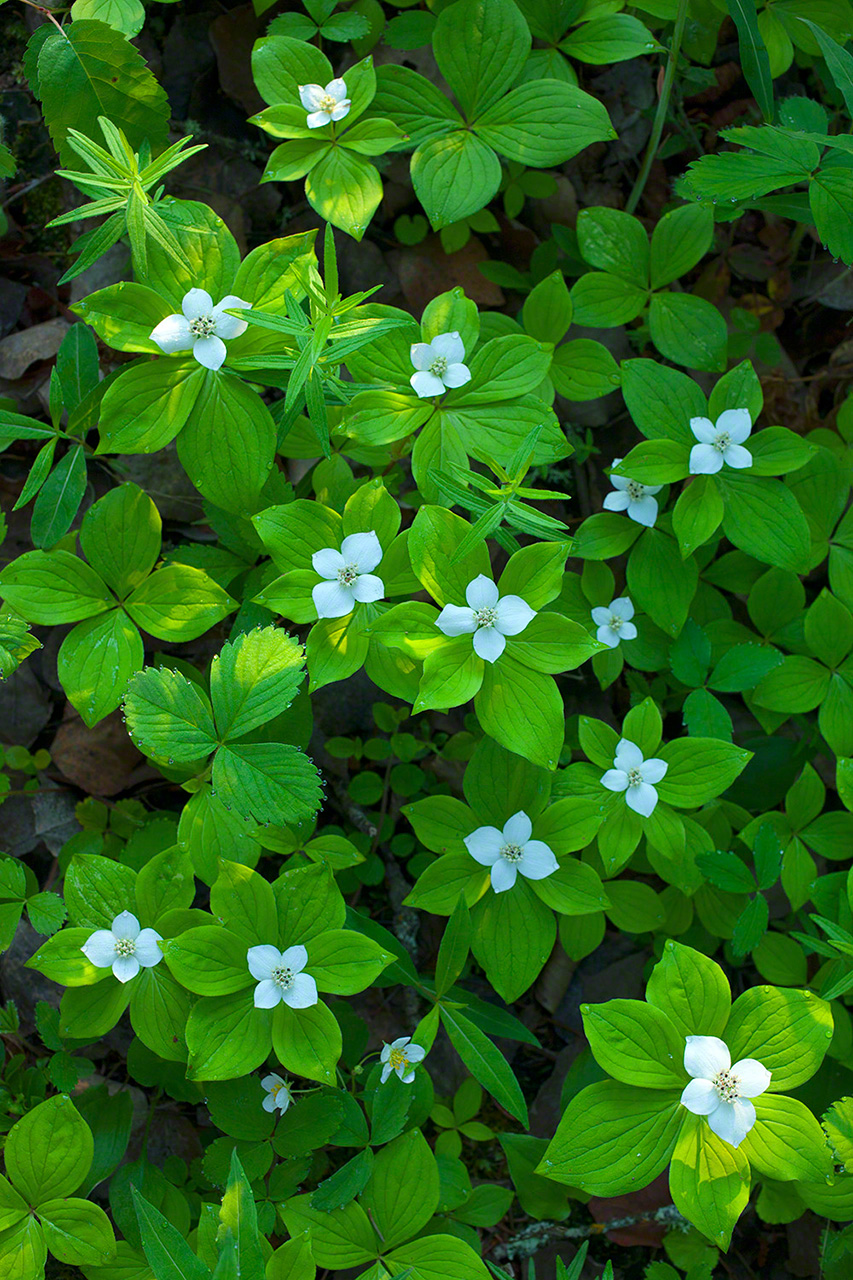 The first day, we quickly landed at a small island to put up for the night. The next day we woke at five in the morning, took a time to enjoy a breakfast of coffee and oatmeal, and set out paddling at eight. Around three in the afternoon, we found a good place to camp, and set up our tent. We were on a canoe trip, but we wouldn’t spend the whole time on the water. The lakes are not always connected by waterways, and there are falls, rapids, and shallows—places a canoe cannot pass. At such times, we have to carry the canoe and our packs over trails, something called “portage.”

We were not traveling with a goal in mind, like climbers aiming for a mountaintop. Rather, we packed enough food to last for a time, then wandered as we wished around all the lakes, until we were ready to return our starting point. The ever-changing environment sharpened our senses and we came to read the weather. We were taking this free style of traveling to its limit, and the most important thing about our journey became how deeply we could drink in the experience of being in the woods. 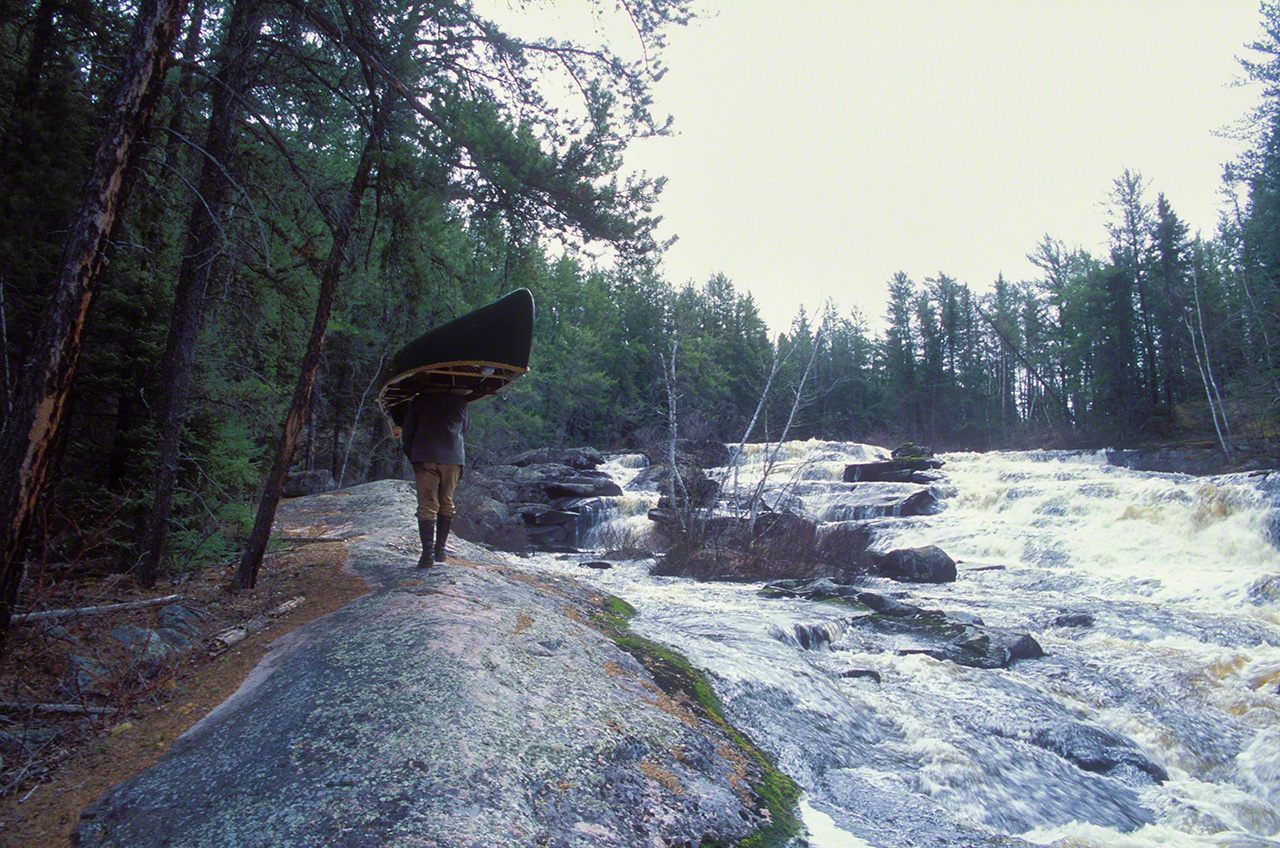 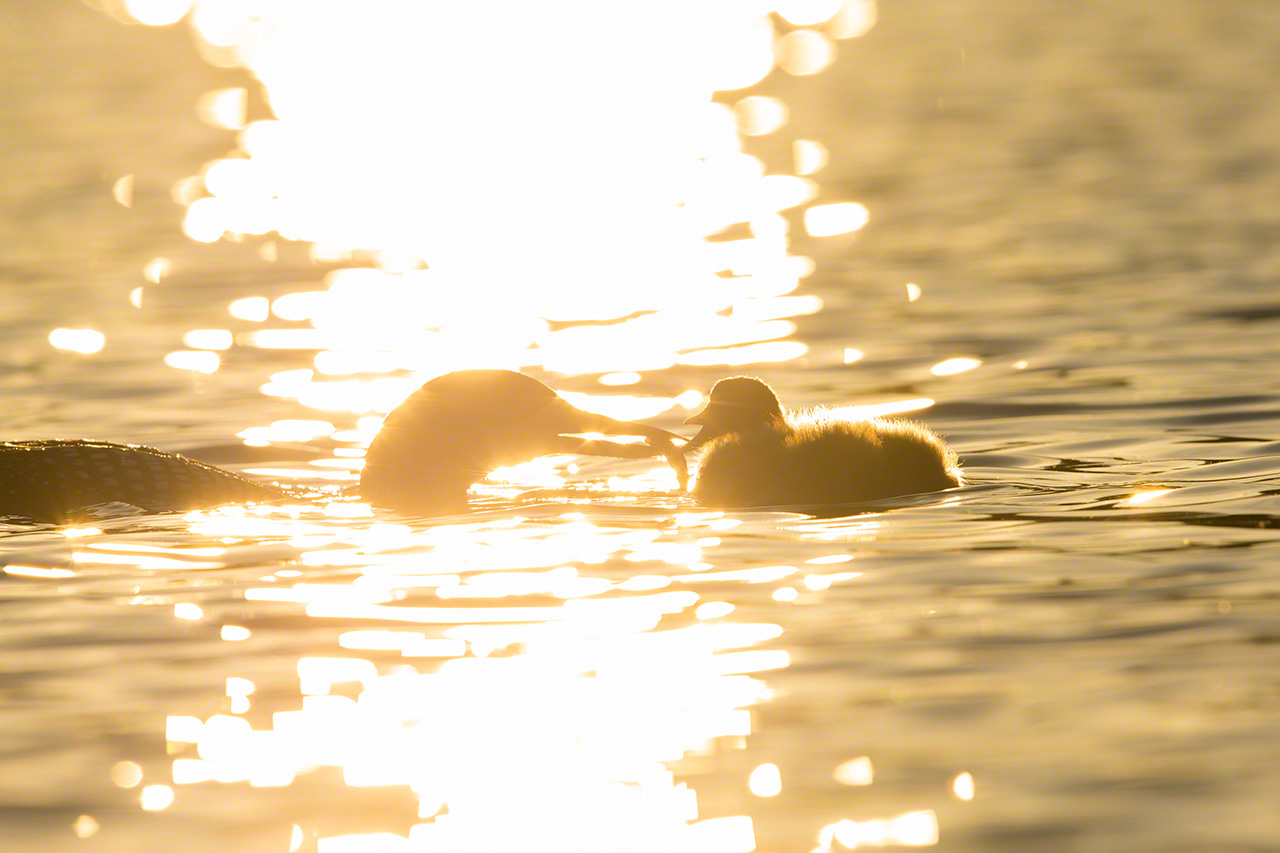 The Northwoods were a thriving spot for the fur trade from the seventeenth to the nineteenth centuries. European aristocrats of the day loved beaver hats, so traders from Britain and France came in droves to get high quality North American pelts. Trading posts were set up throughout the wilderness, from Minnesota’s Grand Portage on the shores of Lake Superior in the southeast, to Lake Athabasca far to the northwest. Indigenous trappers came to the posts to exchange furs for European ironware and blankets. The canoe-based network of trading routes spread wider through this area than the modern automobile road network, and the route we followed may well have been one used by fur traders carrying their wares in the distant past. 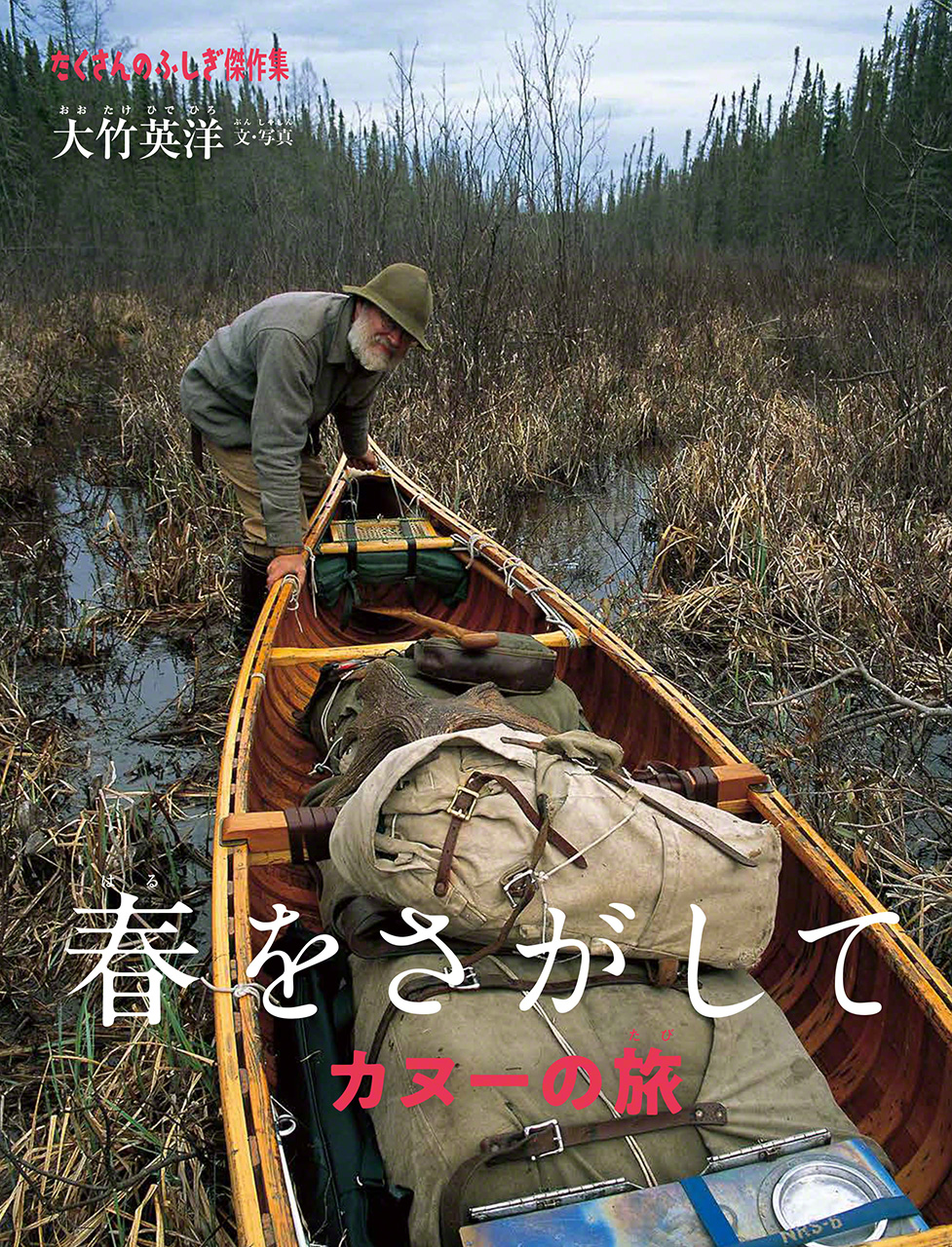 Haru o sagashite: kanū no tabi (In Search of Spring by Canoe), a special edition put out in 2020 by the Takusan no fushigi (World of Wonders) series. 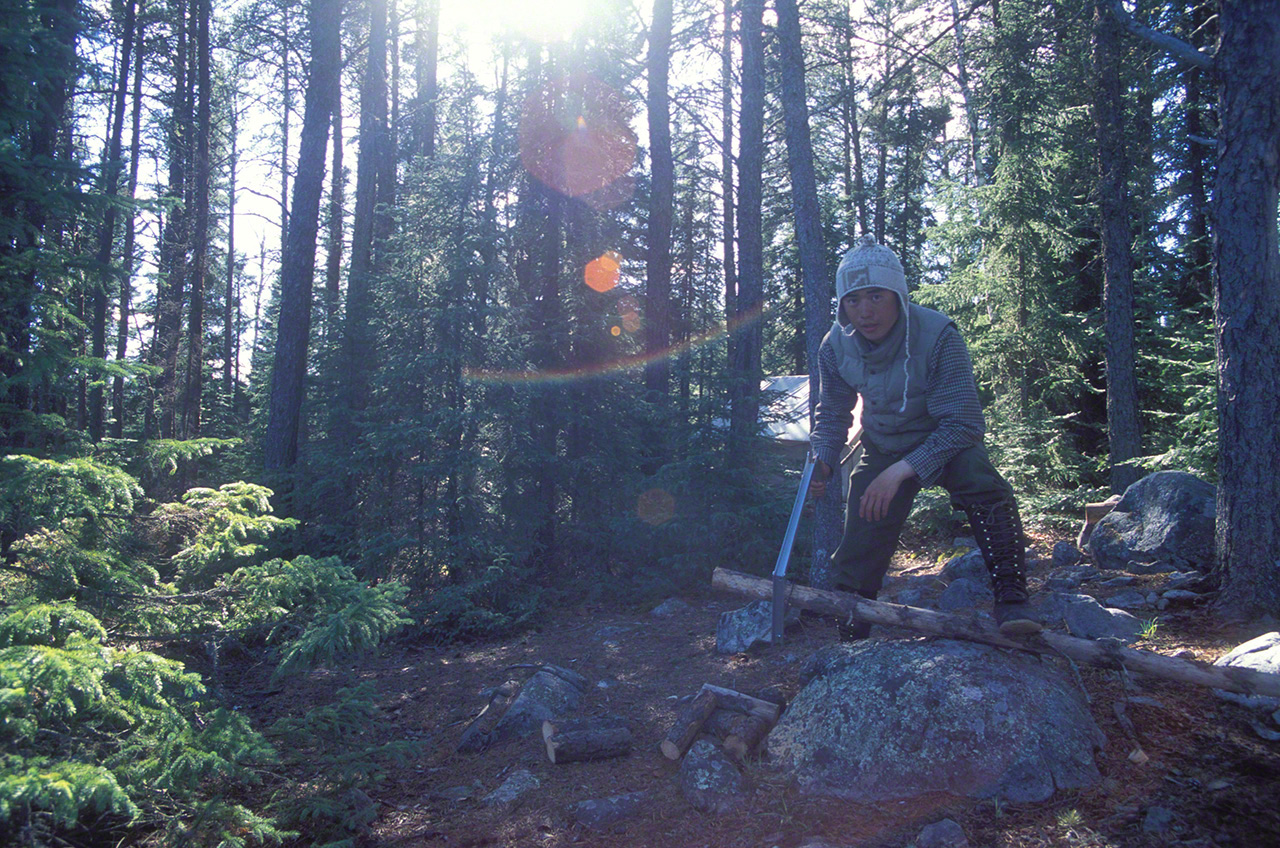 Tasting the Gifts of Nature

Wayne had favorite lakes, so we stayed there for a few days of fishing and tramping. The cold water brought lake trout to the surface. We would paddle along, our fishing poles between our legs, and coax them with lures, trolling from our canoe. When we did catch fish, we would clean them far from camp and take only the meat home, to avoid attracting bears to the tents. We boiled the trout and ate them with wild rice. 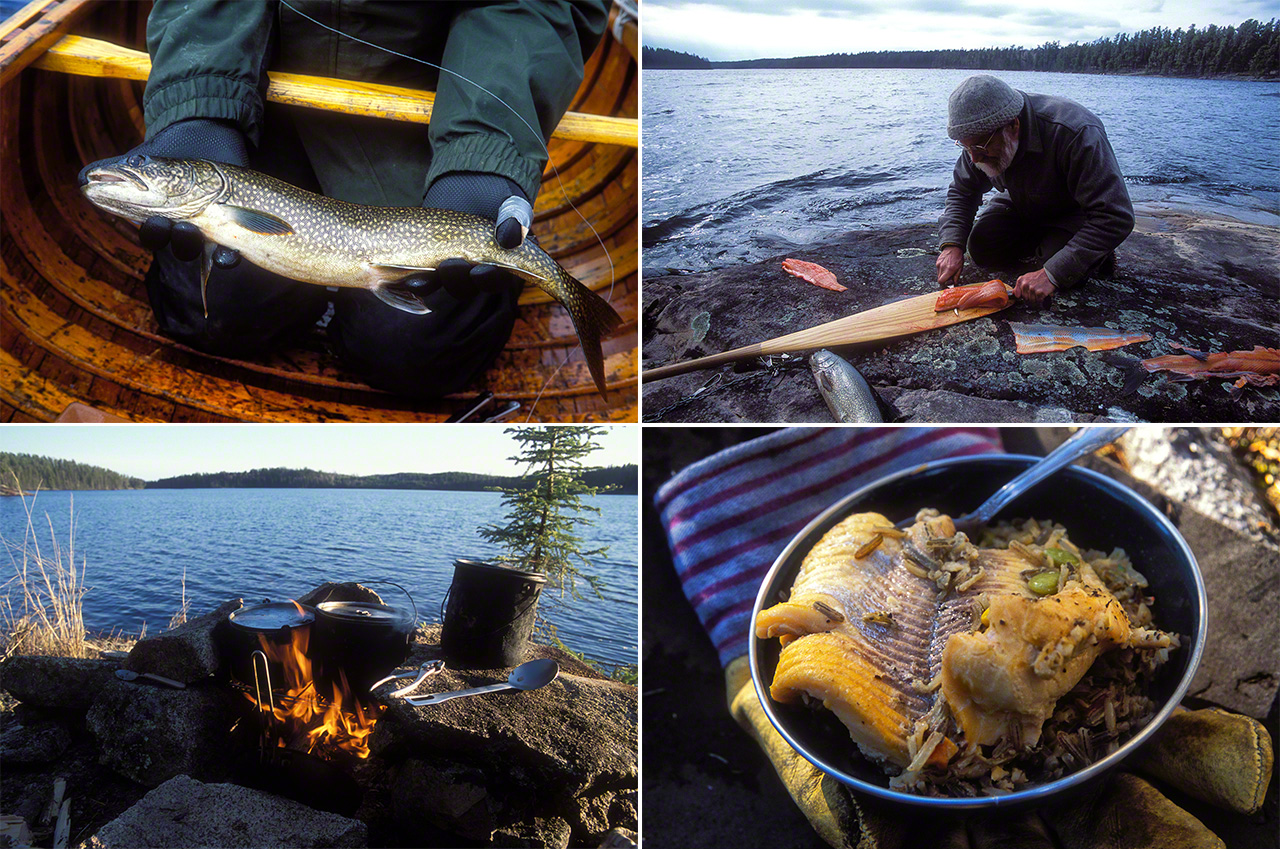 The woods around our tent were always a good source of dried logs for the wood stove. The mornings and evenings were still cold, so we would warm ourselves around the stove and enjoyed the crackling of the flames. My love of fishing and campfires is what first got me out in the wilderness, so this trip was like some kind of dream. 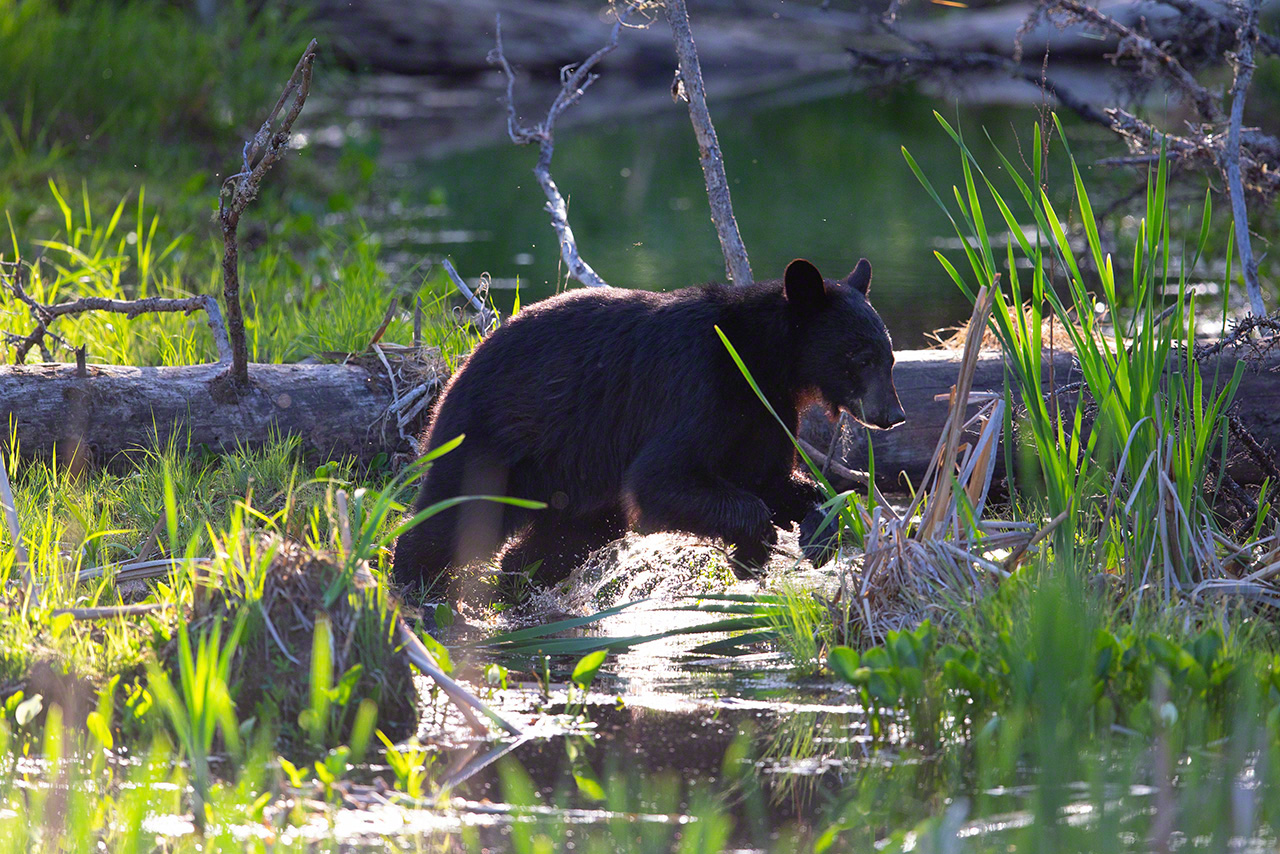 An American black bear splashing around a pond. (2018)

The first few days after we started were painful ones for me. We would paddle six hours a day, set up our tents, and then cut firewood. I was soon sore from head to foot. After a week or so, though, my muscles toughened up, and I could relax enough to truly enjoy the scenery.

We had to carry our gear overland several times a day—sometimes as many as a dozen—allowing us to explore the trails up close. The exposed rocks along the lakeshore were covered in moss like a Japanese garden, and the jack pines and spruces sprouting from the cracks were twisted like bonsai. Sometimes, we would walk across marshes covered with spongy moss, or get covered in mud pushing our heavy canoe when the rivers were too low. 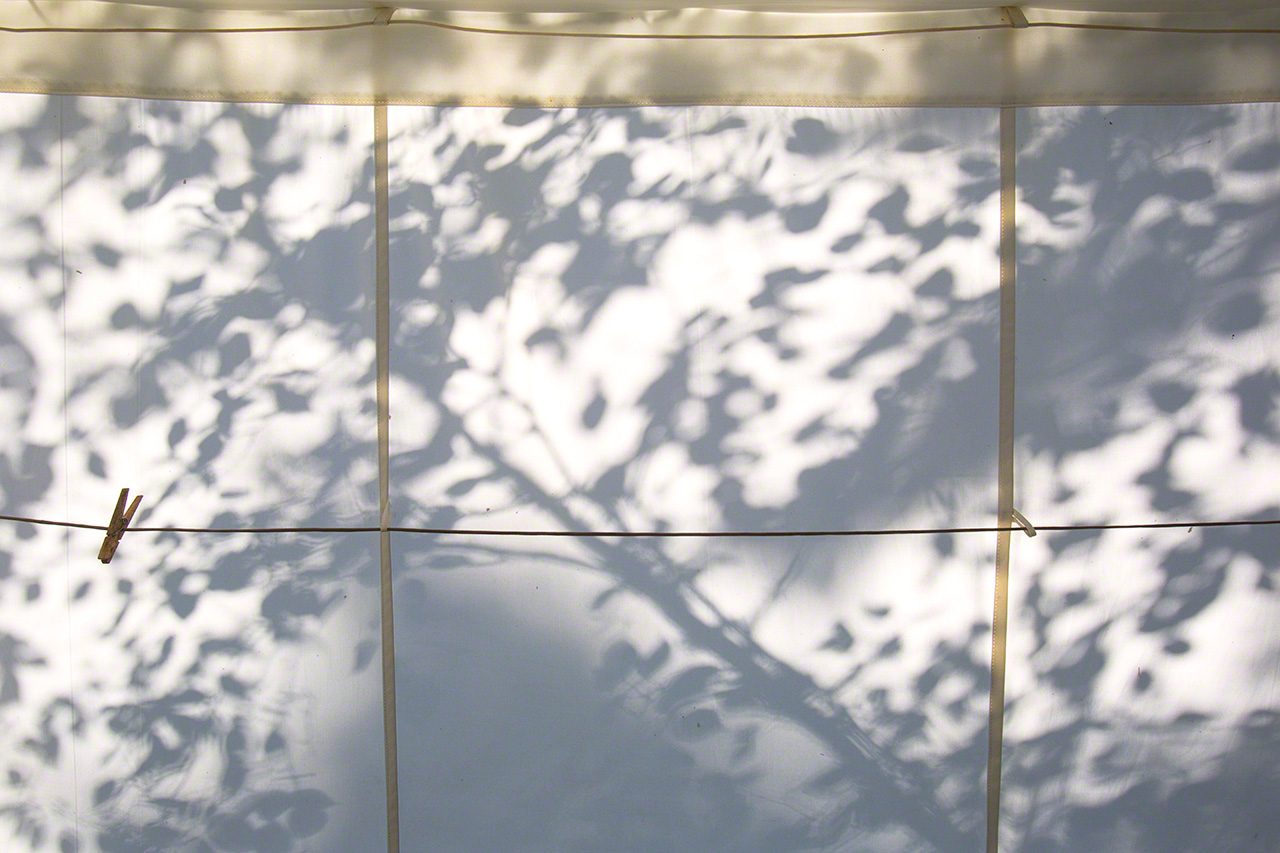 I eventually noticed that I hadn’t spoken to anyone besides Wayne for over two weeks. We both knew what we had to do, so we spoke less and less even to each other. We wandered the wilderness, all of our gear packed into just five meters of watercraft. Carrying only what we needed, we were unencumbered and highly mobile. We could decide where we wanted to sleep, savoring the contentment of being embraced by forest. The solitude was incredible. It was like the two of us were in our own world, one utterly apart from the rest of humanity. The pleasures of this kind of travel, which had so bewitched Wayne, worked their way deep into my soul. 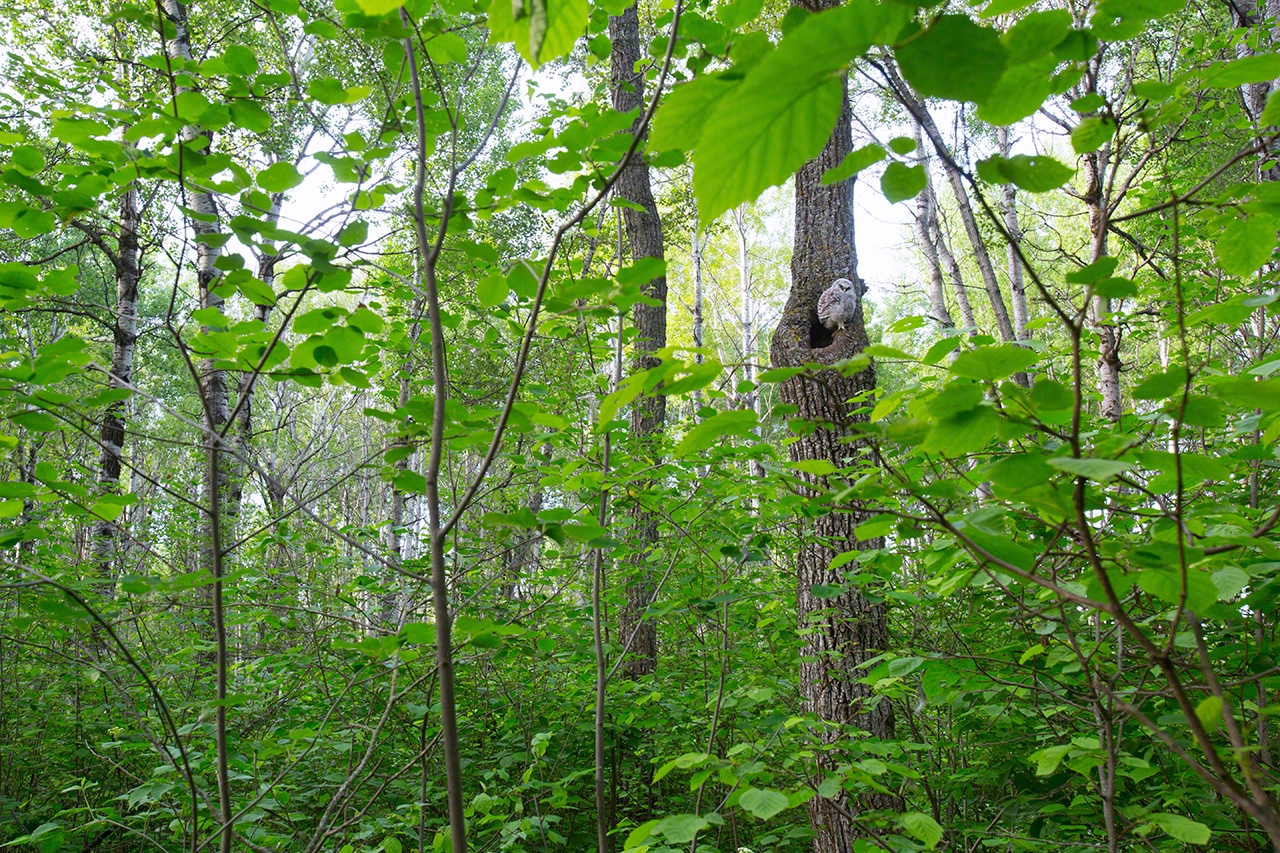 The fresh green spring woods. A baby barred owl is about ready to leave the nest. (2015)

Sensing the Shape of the Northwoods

When we returned to Leano Lake, our start and end point, we packed the canoe and our gear into the car and headed for the park office at Red Lake, Ontario. The car’s power and speed was almost frightening. From a canoe, you can study every leaf on the shrubs along the lakeside, but from a car window the scenery seems to just fly by, vanishing into the distance behind you. A car can get you to your destination quickly and easily, but there is so much you miss along the way. 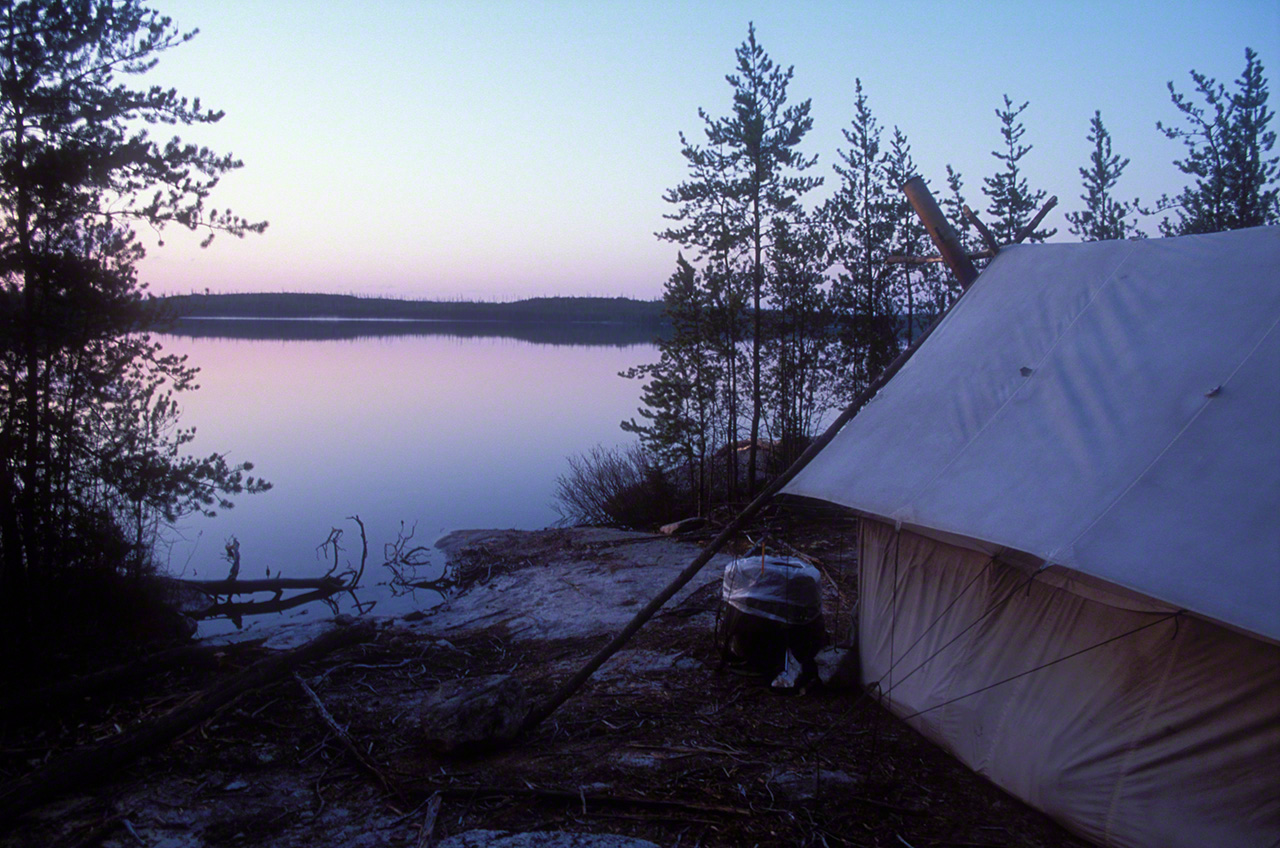 As the sunrise approaches, birds break into song. (2004)

I had yet again failed to sight a wolf, but I had been right to join Wayne Lewis on his trip. There was more to the Northwoods than the scenery and wildlife. I had experienced for myself the pleasure of traveling by canoe. I had also learned a bit about the local fur trading history, as well as the culture of the indigenous peoples who had first traveled these waters. I felt I was finally sensing the true shape of the Northwoods, the shape I needed to capture in my work.

Sadly, in the summer two years after that trip, something unexpected happened. A forest fire struck the very part of the Woodland Caribou Provincial Park we had traveled through, burning up that beautiful forest, so full of memories for me.